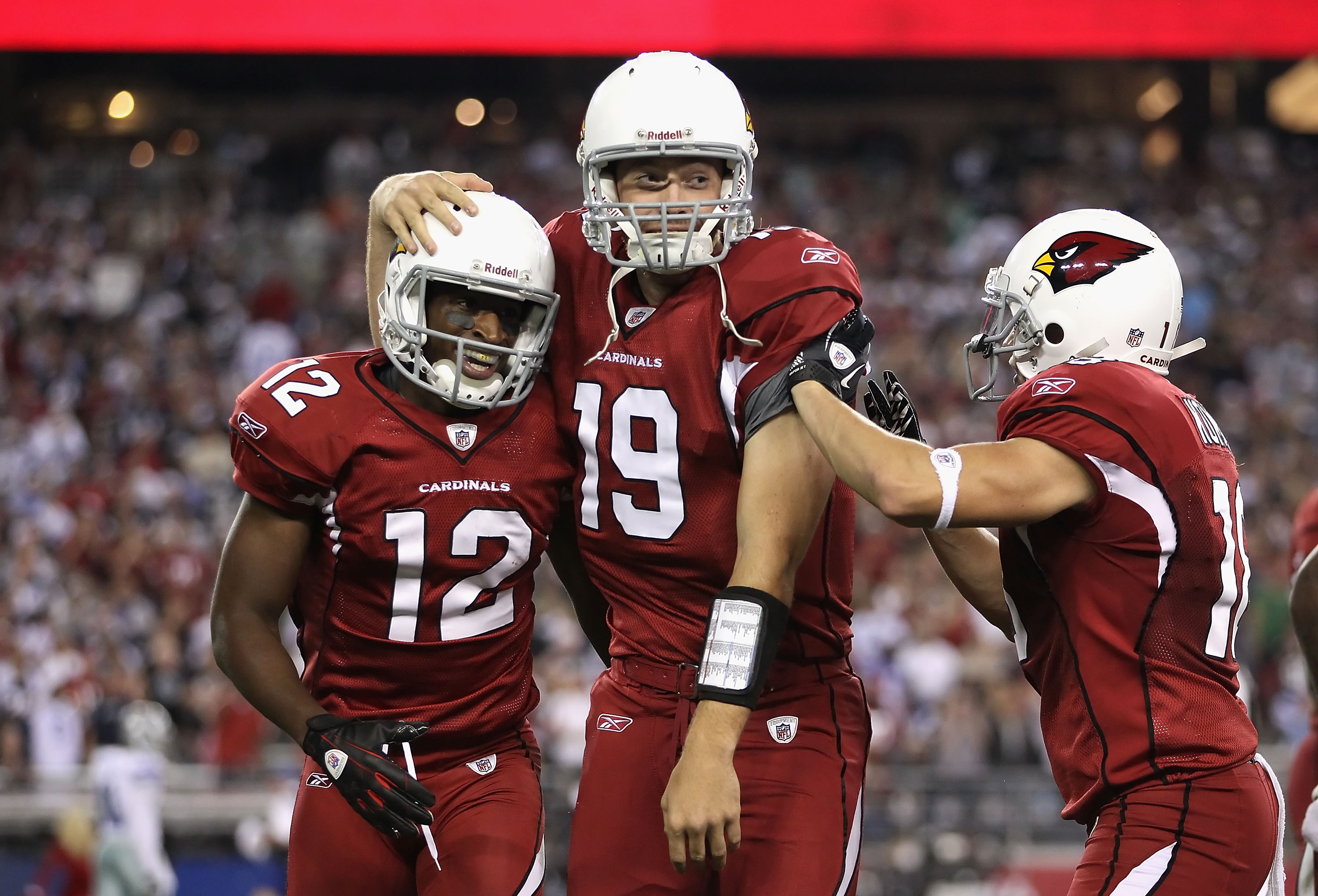 Assuming they get a new collective bargaining agreement done, NFL Free Agency is scheduled to begin on March 3, 2011.  I'm going to go through every team between now and then and identify their top five free agents and try to determine what should be done with each player, be it re-sign them or let them walk.  I've been going team by team in draft order and am at the team with the fifth pick in the draft, the Arizona Cardinals.

The Cardinals were one of many NFL teams that failed to live up to expectations in 2010.  Coming off winning the NFC West two years in a row, many expected the Cardinals to run away with the weak division once again.  Few people anticipated what would happen to the offense without Kurt Warner at the helm.  The NFL's 14th-ranked passing offense last year fell 31st this year and their already bad rushing attack fell to last in the league.

In 2009, Kurt Warner and Matt Leinhart combined to throw for over 4000 yards and completed over 66% of their passes.  This year, Derek Anderson, Max Hall, John Skelton and Richard Bartel all played quarterback for the Cards and failed to break 3000 yards passing combined. None of them managed to break the 58% mark for completion percentage.

Needless to say, the quarterback play downed this team in 2010.  The Cardinals will have to acknowledge that as they evaluate their own personnel this offseason.  They have a handful of players whose contracts are up that appear to have talent.  The difficulty is determining who looked good because the talent level around them was so bad, and who was actually better than they looked, but was being held back by their teammates poor play. 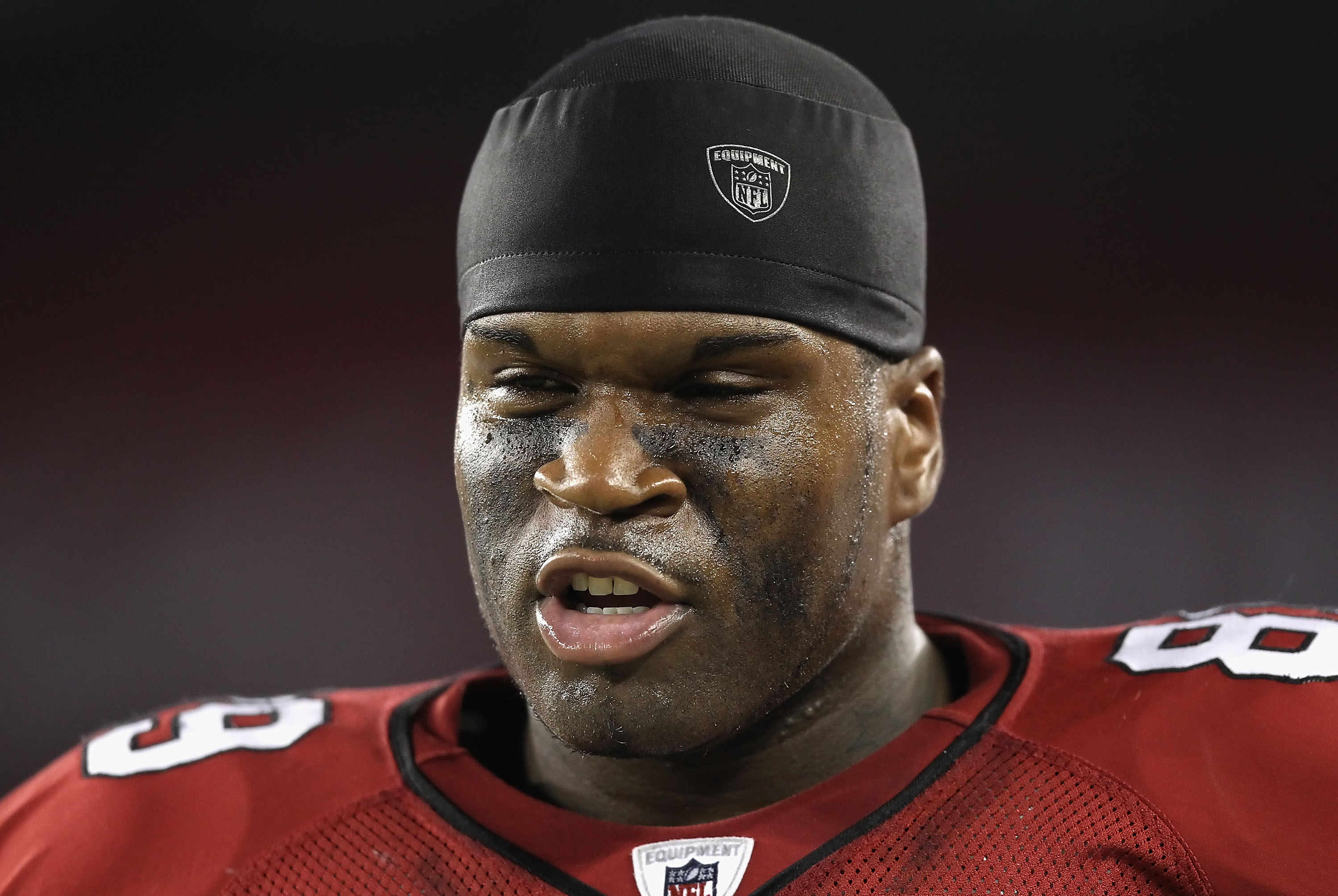 For the year, the Cardinals' top two tight ends, Ben Patrick and Stephen Spach, combined for 23 catches for 163 yards.  Even adding them together, Benphen Patrach would be 38th amongst tight ends in catches and 44th in yards.  That kind of production is just not acceptable from your tight end position, especially on a team that was starting rookie quarterbacks half the year.

Luckily for the Cardinals, both Patrick and Spach are free agents this year.  Both are supposed to be better blocking tight ends than receivers, but in today's NFL it is hard to beat strong defenses when they don't have to respect your tight end.  The Cardinals should be able to get better production from the draft.  There were 19 rookie tight ends who saw NFL action this year and eight of them managed as good or better production than the Cardinals had this year. 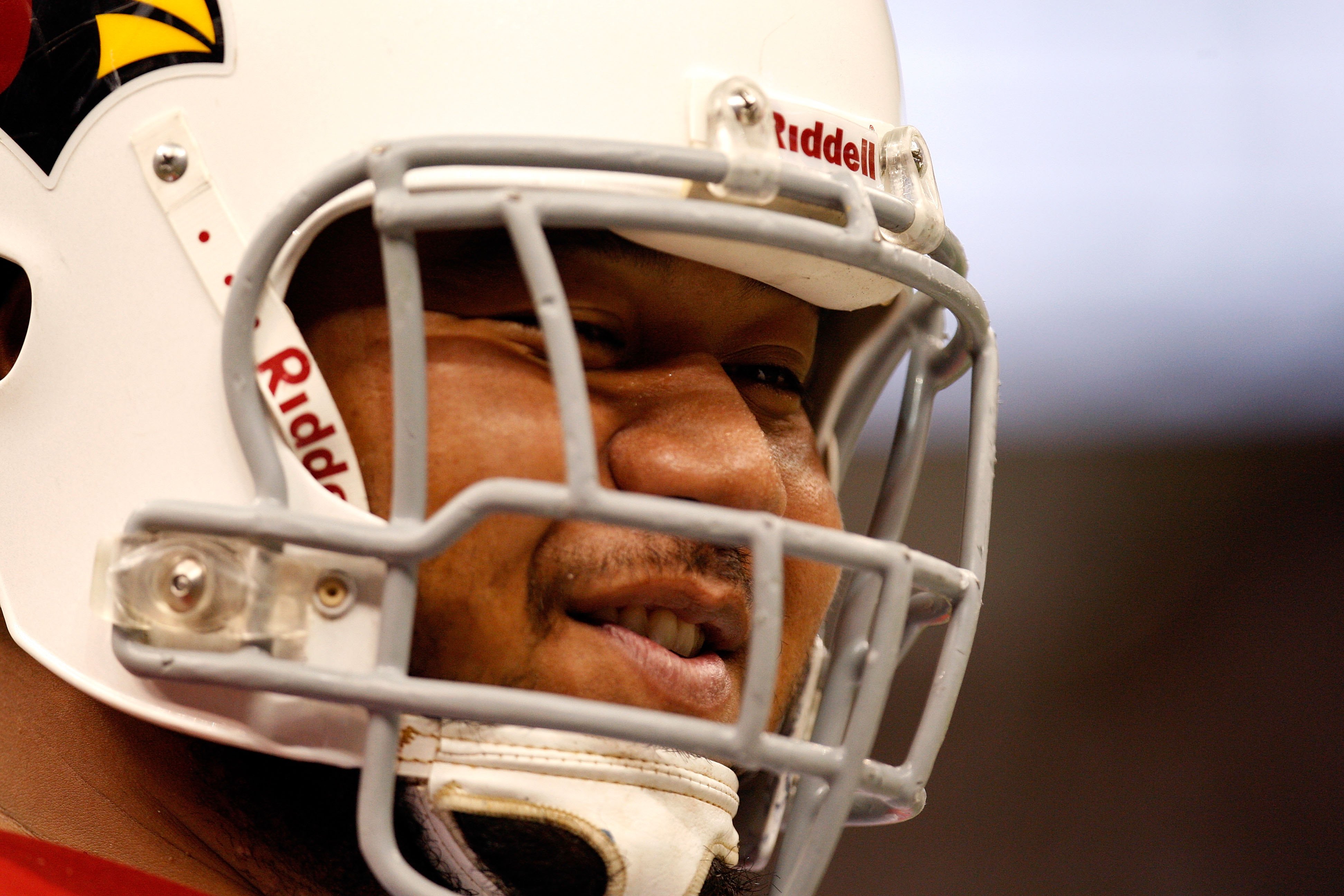 Because of a lack of a good statistical way to measure offensive line play in the NFL, it's often hard for someone without access to game film to diagnose offensive line play.  Luckily for me, Stanford graduate and former NFL lineman Ben Muth of Football Outsiders watched some tape.  He came to the conclusion that the poor offensive line play was more on the fault of the tackles than the interior lineman.

Deuce Lutui and Lyle Sendlein are relatively young players who both do passable jobs.  When it comes to interior lineman, there is a small number of exceptional players and then a bunch of guys who all give about the same level of play.  Lutui and Sendlein aren't part of that exceptional group, but if they can be brought back on the cheap, they could provide some continuity on the offensive line.  Lutui has mentioned he would like to stay in Arizona, but isn't sure if they will bring him back. 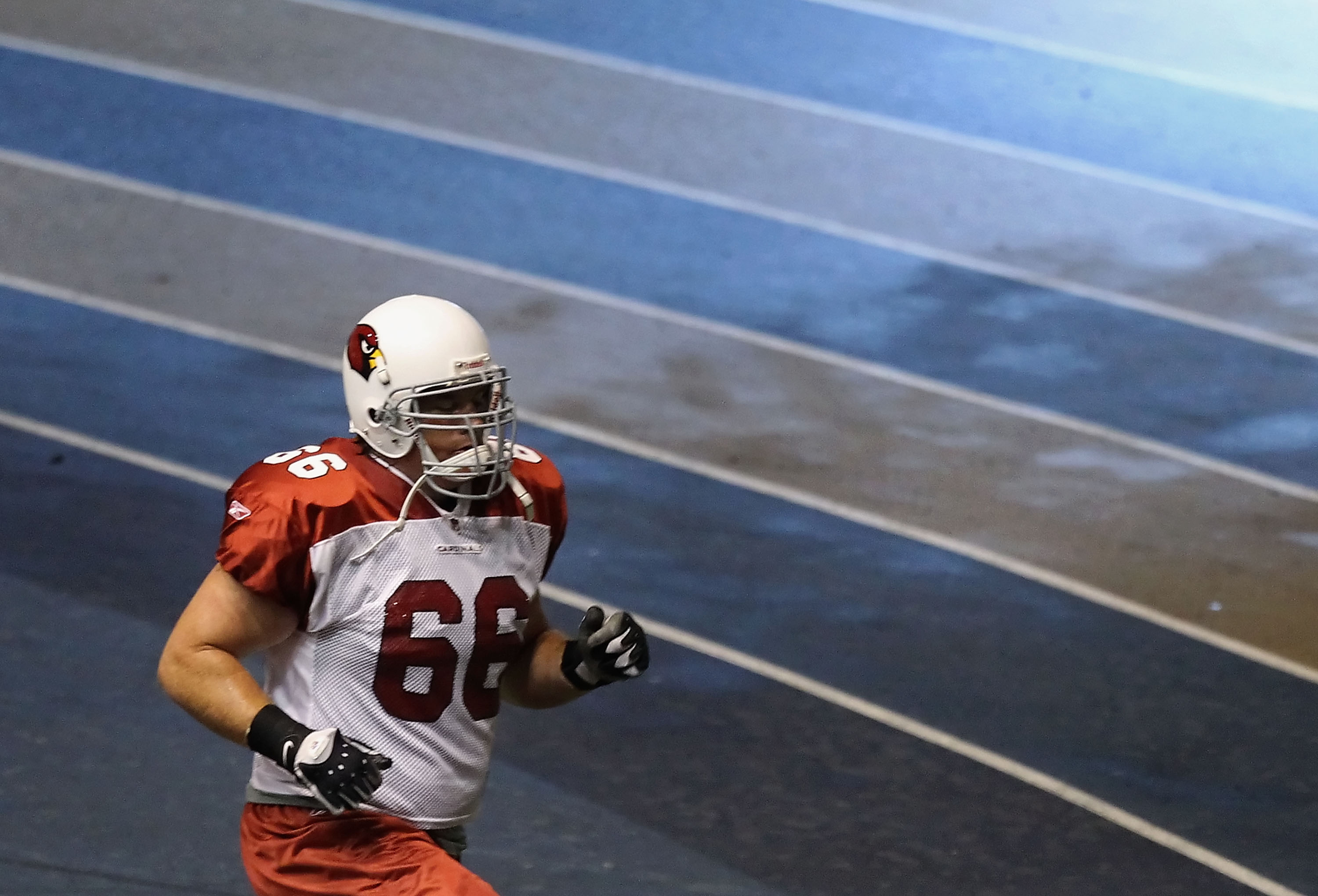 Alan Faneca is an interesting case at left guard.  He is 34 and it is evident in his play that he's not the Pro Bowler he once was, but it's not like Arizona has a young player on the roster ready to step in and replace him.

He signed a one year offer last year for 2.5 million dollars.  If the Cardinals can get him re-signed on another one-year deal at a similar price, it would probably be a good move.  They could then look to find a player in this year's draft and wouldn't be forced to put him right into a starting role. 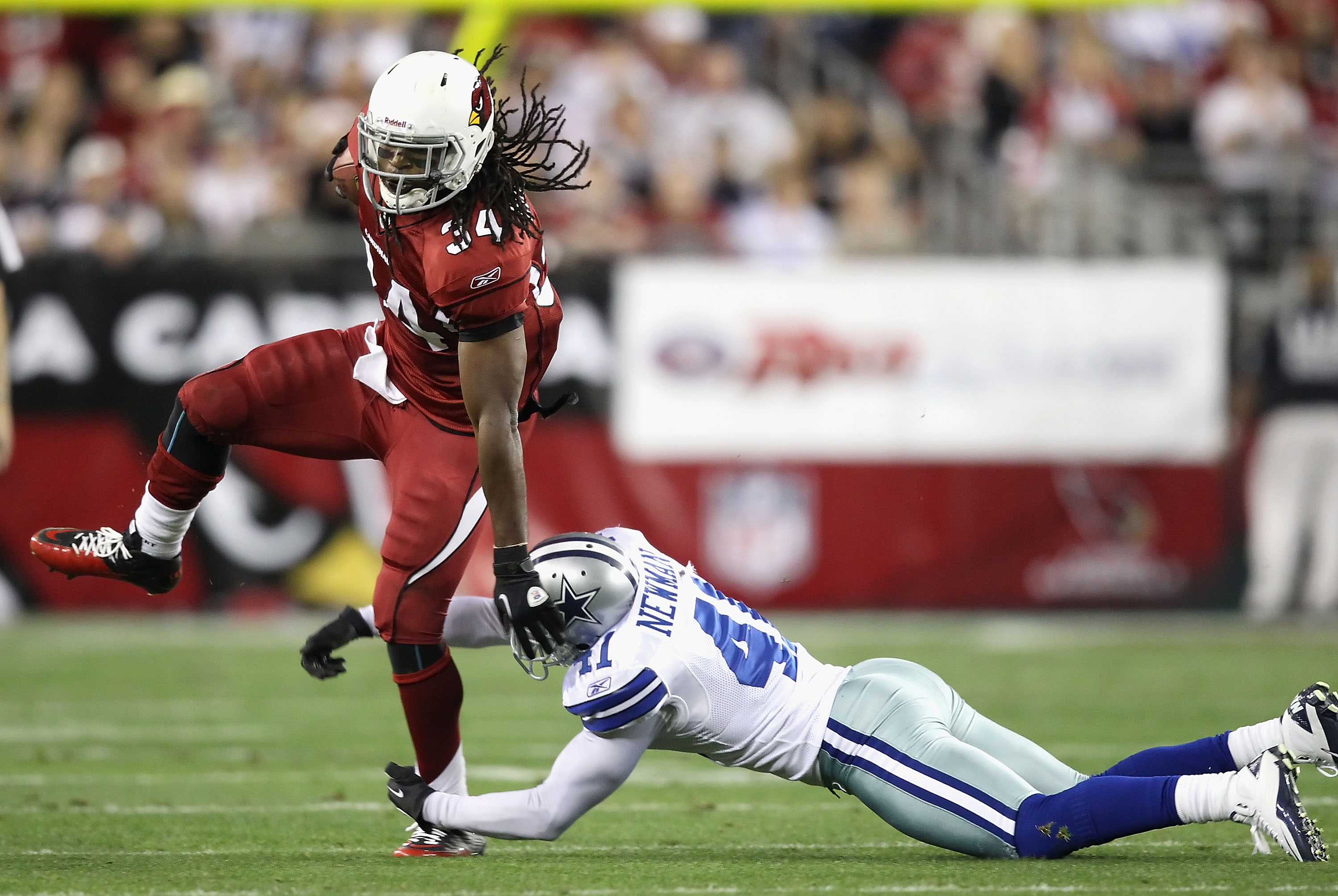 Tim Hightower is a perplexing running back.  He's big, 6'0" and 222 pounds, and has decent speed, but he doesn't seem to produce on a consistent basis.  He usually gets 10 to 15 carries a game, but if he doesn't break off a big run his yards per carry are far below average.  He'll be employed next year though, because he's a great third down running back with soft hands.

The Cardinals should try to bring him back, but I expect that the price is going to get too steep for them to get involved.  Pass catching running backs are in high demand as more teams spread the field and I expect multiple teams to be interested in Hightower. With Beanie Wells and LaRod Stephens-Howling already on the roster, Arizona shouldn't overpay to bring Tim back. 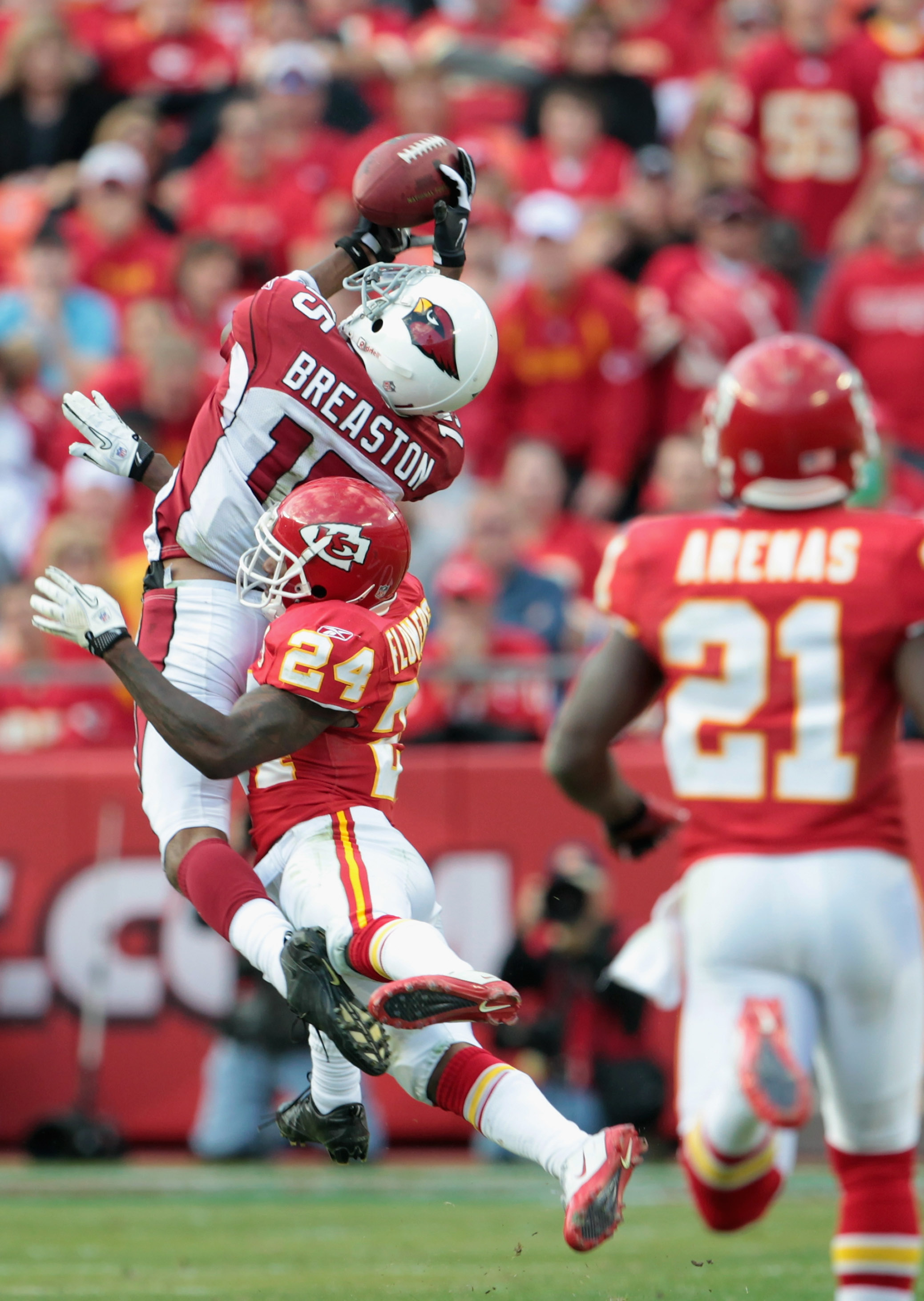 The Cardinals receivers should be given a free pass for their stats this year.  Even missing a few games, Steve Breaston still managed 700 yards in his first season as a starter without an NFL quarterback to throw him the ball.  In spite of his stats, he proved that he is a capable No. 2 receiver.

Fortuitously for the Cardinals, his bad stats this year should keep his market value down.  The Cardinals aren't usually big spenders and they can't afford to let Breaston walk away.  Larry Fitzgerald already faces double coverage on almost every play.  The Cardinals need to bring Breaston back and add more weapons to that offense.  If Breaston ends up leaving, teams would be free to just triple team Larry all the time, not a good thing for the morale of a guy whose contract is up after next year.