In no particular order but numbered to make viewing easier. Enjoy!

The infamous Manchester United grey kit. Apparently the players were unable to "see" each other and the shirt was blamed for United's defeat to Southampton. A dull, dull shirt.

Tomato ketchup or artistic? You decide!!

Be honest, it makes you want to vomit.

Lucky for the Premiership new boys they no longer sport these tiger numbers.

16. Anything worn by Jorge Campos

Well known for his flamboyant outfits, Campos designed his own kits. It shows!!

One can only imagine how hard it was for the players to be taken seriously in this.

If you can't beat them, scare the living daylights out of 'em!

Someone just let a child loose with some paint.

The Sky Blues when they were a little off colour.

No not your grandfather's shirt, but one of Kilmarnock's past kits.

Another shirt designed by kids with paint.

Just no excuse for putting grey and orange together!

So bad it's hard to find the words.

It's not quite sure what its meant to be AND its got a butterfly on it. 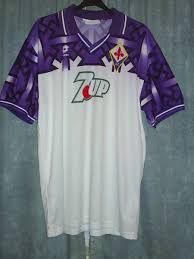 So bad it was banned! Well actually it was banned because it had swastikas embedded in their shirts (intentional or not). Not at all clever!

I'd never heard of them either, but do I really need to explain this! Is it a football jersey, or a cowboy shirt?!

So there you go some of the world's ugliest shirts. The order you may not agree with, but surely on the contents you do.

P.S.: Check out Pt. 2 and proof that the "cowboy" shirt is real here. Thanks.