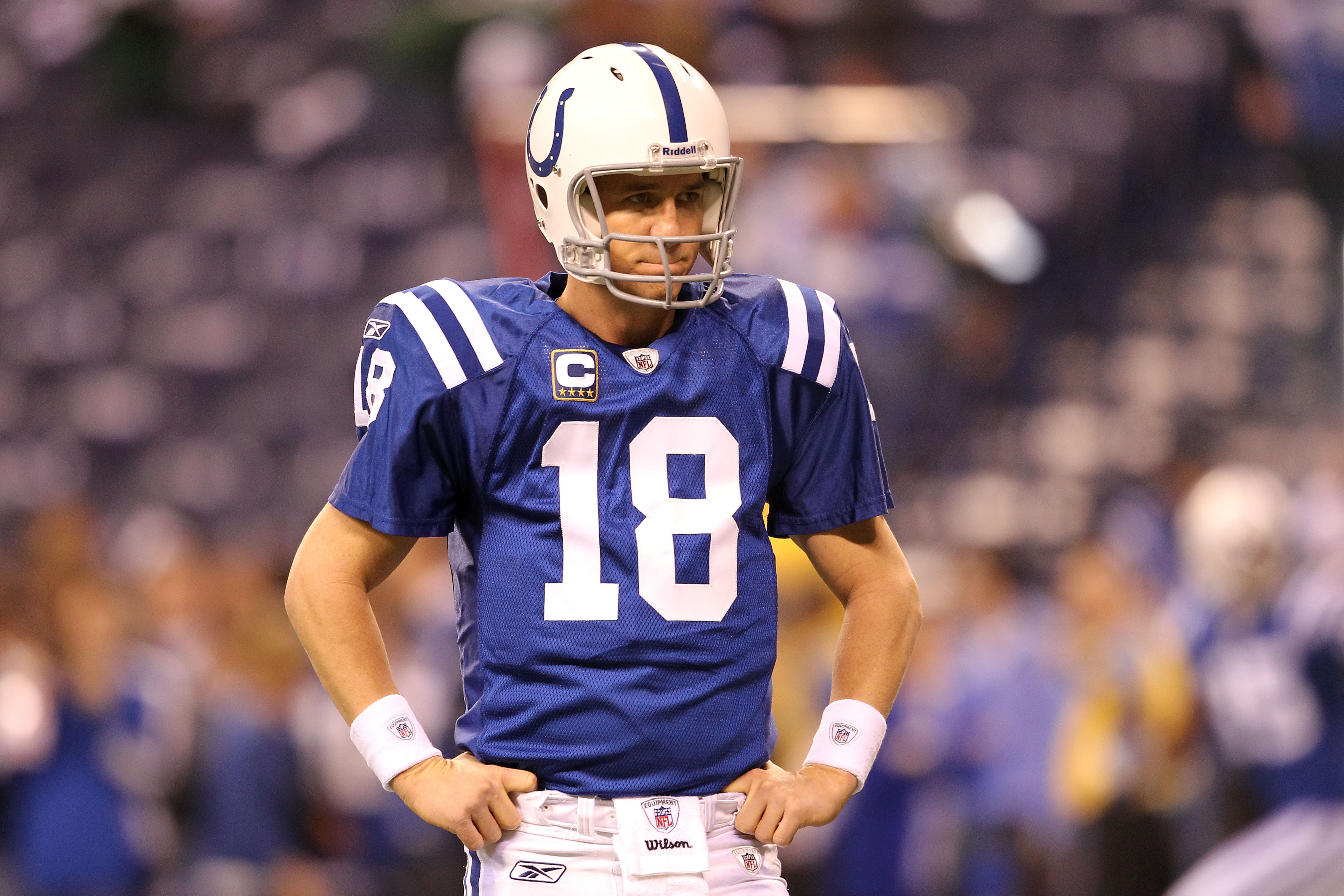 The NFL playoffs 2011 started with a huge upset and while it's still too early to start ranking any games from this postseason in a best or worst category, it's as good a time as any to rank the 25 worst playoff performances of the the last 20 years.

Where will Jim Caldwell's timeout call in the last minute of the game rank down the road? Hard to say right now, but there are some stinkers on here.

This list primarily focuses on teams, but there are a few individual performances by players that stood out enough to receive their own ranking.

Click on to enjoy the misery, unless you're a fan of some of these teams, in which case, grab the Tums. 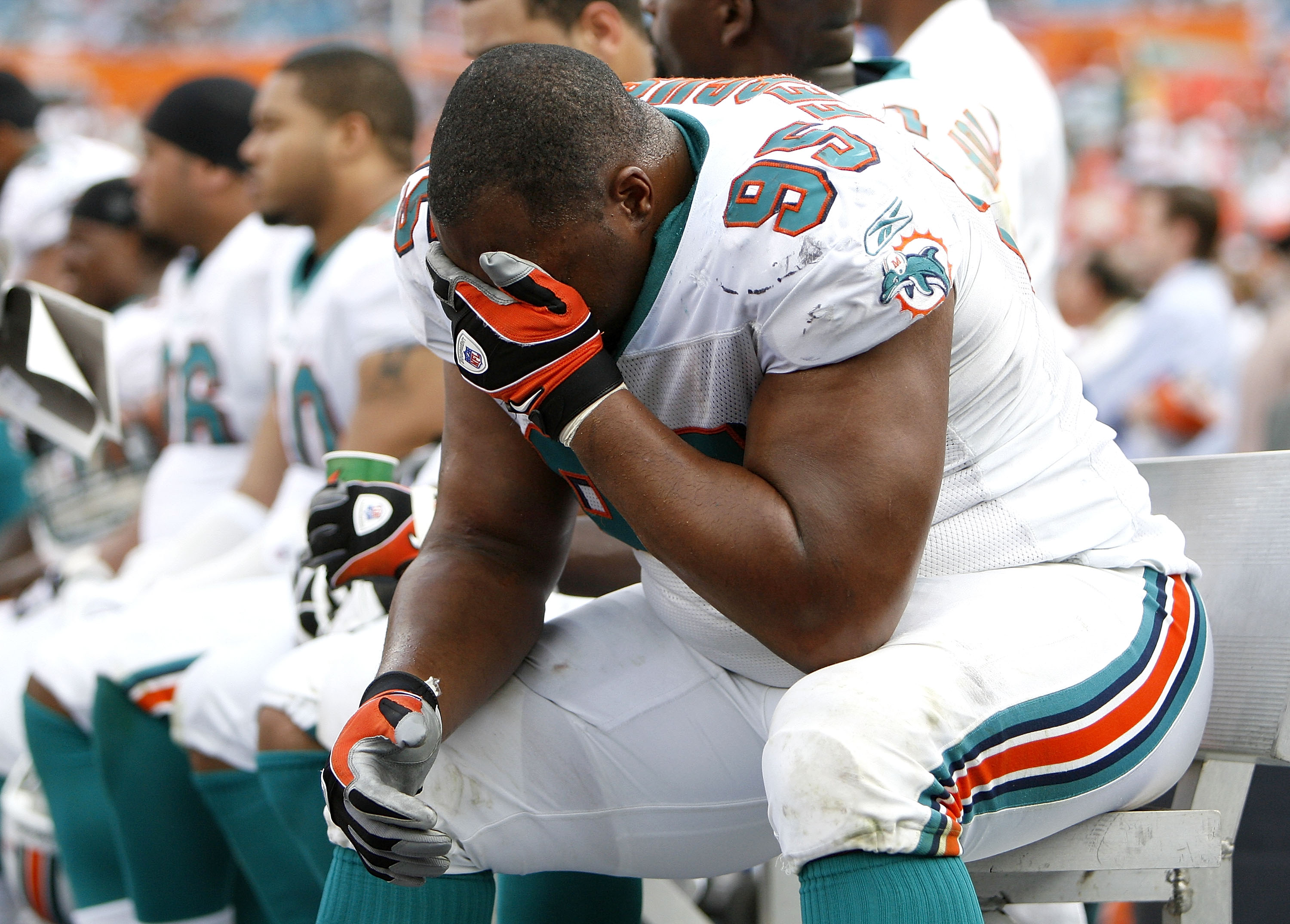 The Dolphins, which led the league in not giving the ball way, had only 13 takeaways and turned the ball over five times in this lopsided loss.

Chad Pennington threw a pick six to Ed Reed with one of the turnovers, an extra point was blocked and the turnovers just kept on coming.

The Dolphins didn't look anything like the team that made it to the playoffs and that was the end of their season. 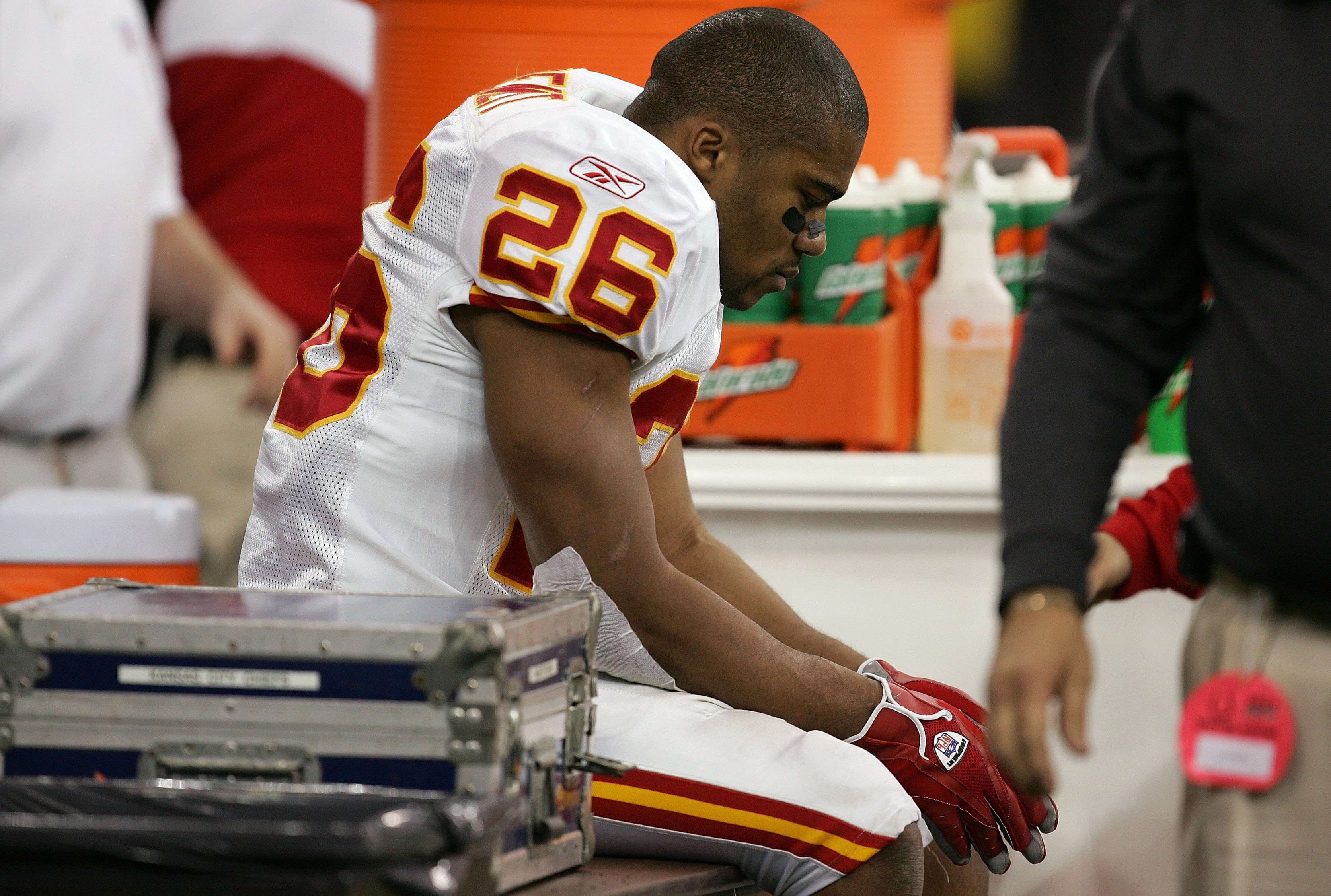 The Kansas City Chiefs came out against the Indianapolis Colts and gained only 126 yards on offense despite intercepting Peyton Manning three times.

Despite Manning's bad day, the Colts gained 435 yards on offense and the Chiefs just couldn't put anything resembling a consistent offense together. 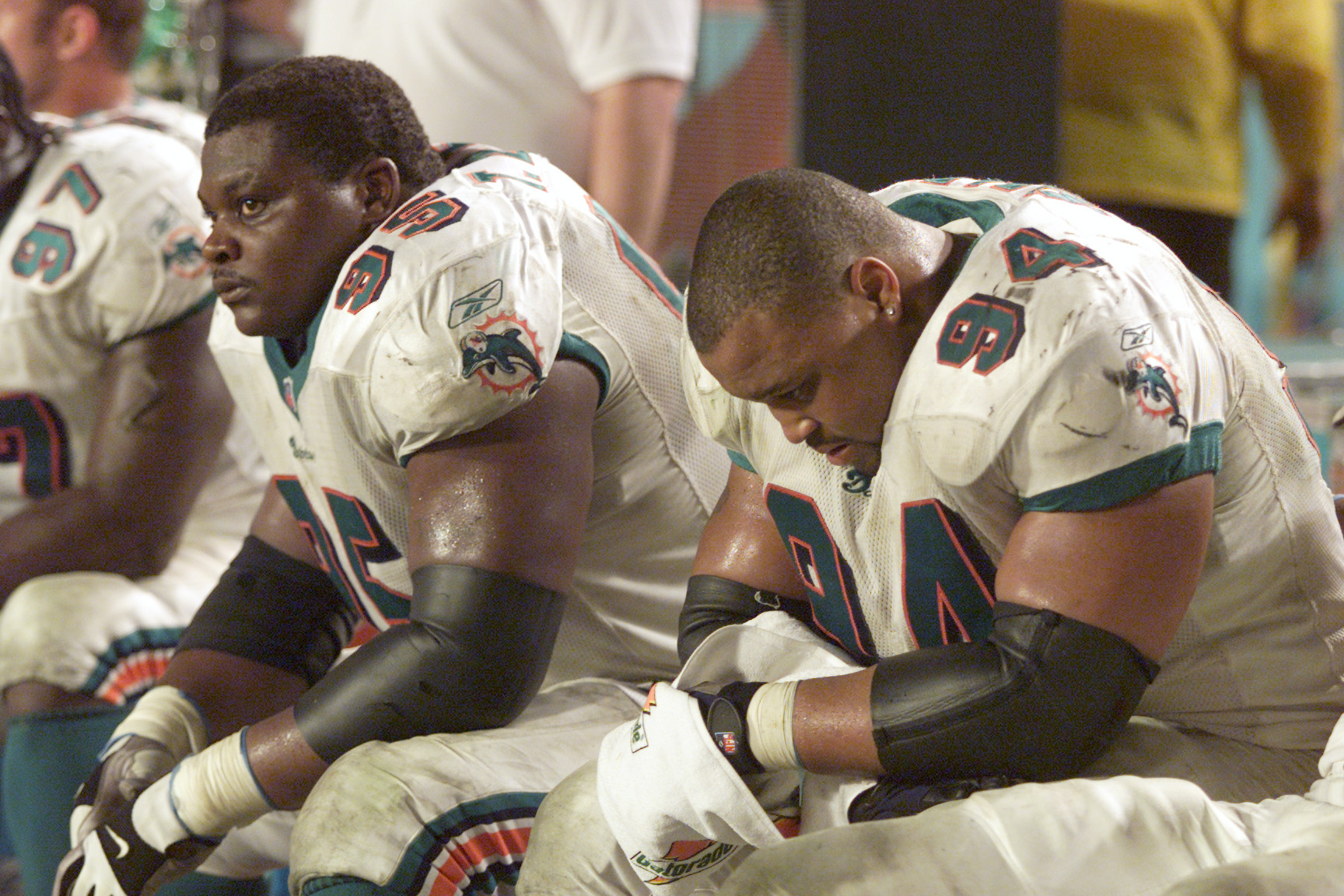 The Ravens ran all over the Dolphins, sacked Jay Fiedler three times and held the Dolphins running backs to a combined 20 yards on 11 carries. Fiedler was the lead rusher with 16 yards.

The Dolphins managed one field goal the entire game, which was kicked in the first quarter.

Their defense gave up 222 rushing yards and allowed a 99-yard touchdown drive. 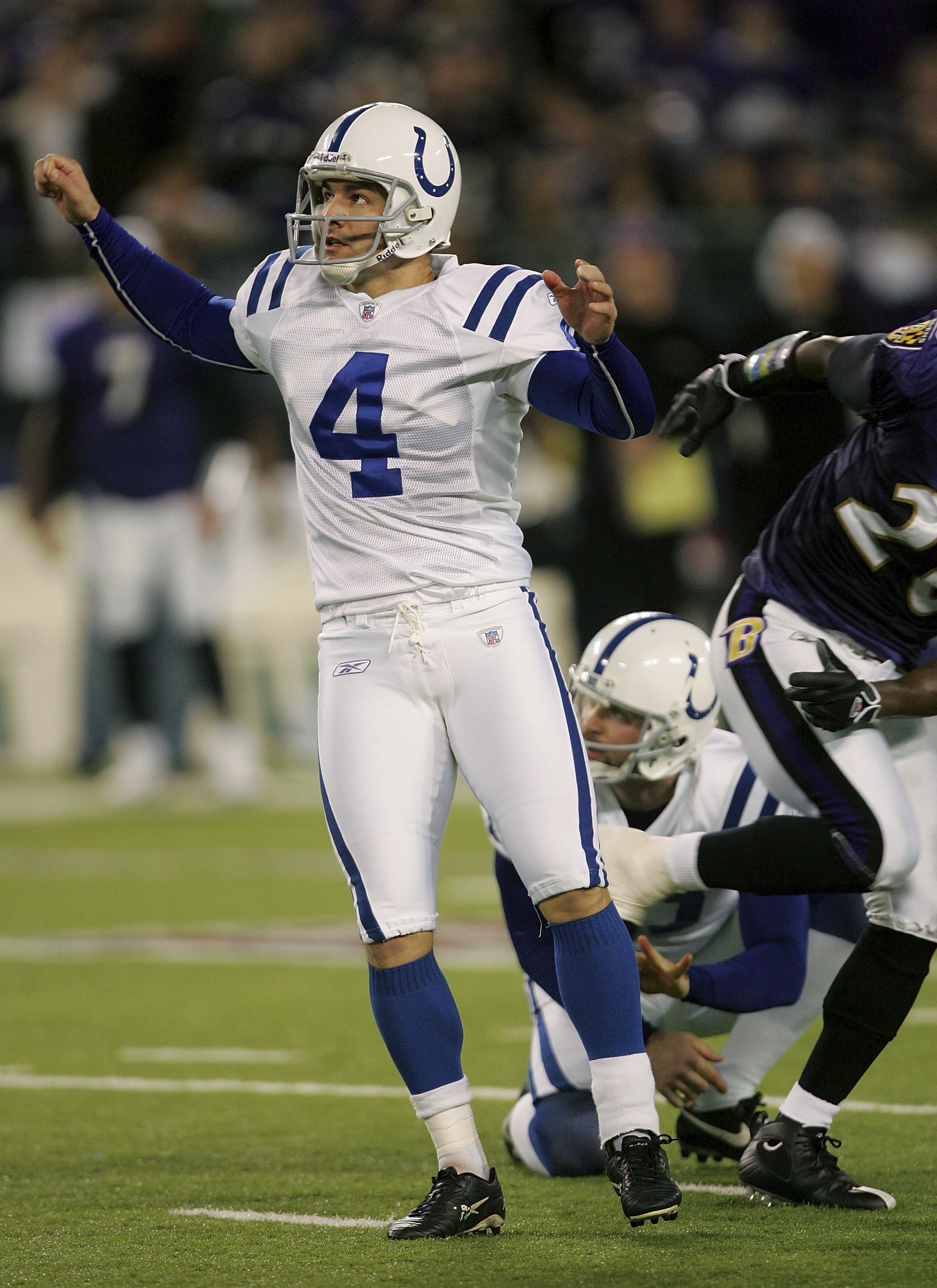 In only the second NFL playoff game in history to not have a touchdown, the Colts won the battle of field goals, 15-6.

The Ravens couldn't get anything going offensively, and had their defense not been so strong, the score would've been a lot more lopsided.

The first field-goal game was the 1979 NFC Championship Game, when the Rams beat the Buccaneers, 9-0. 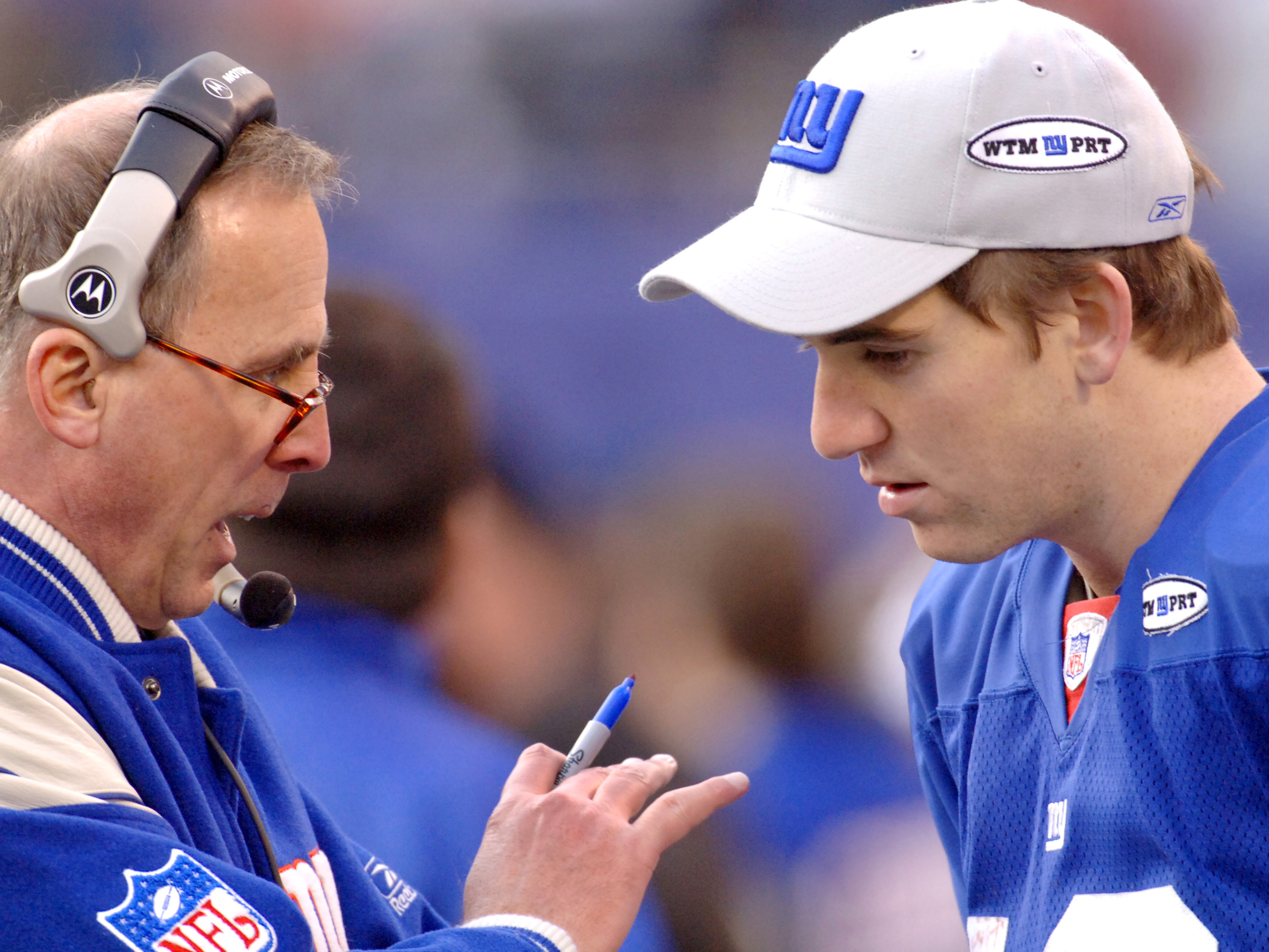 Tiki Barber, Pro Bowl running back for the Giants, may as well have stayed home in this game.

A very young Eli Manning threw three interceptions and the Panthers flat-out dominated the Giants in their own stadium.

The Giants got shut out and the Panthers eventually would advance to the NFC Championship, losing to the Seattle Seahawks. 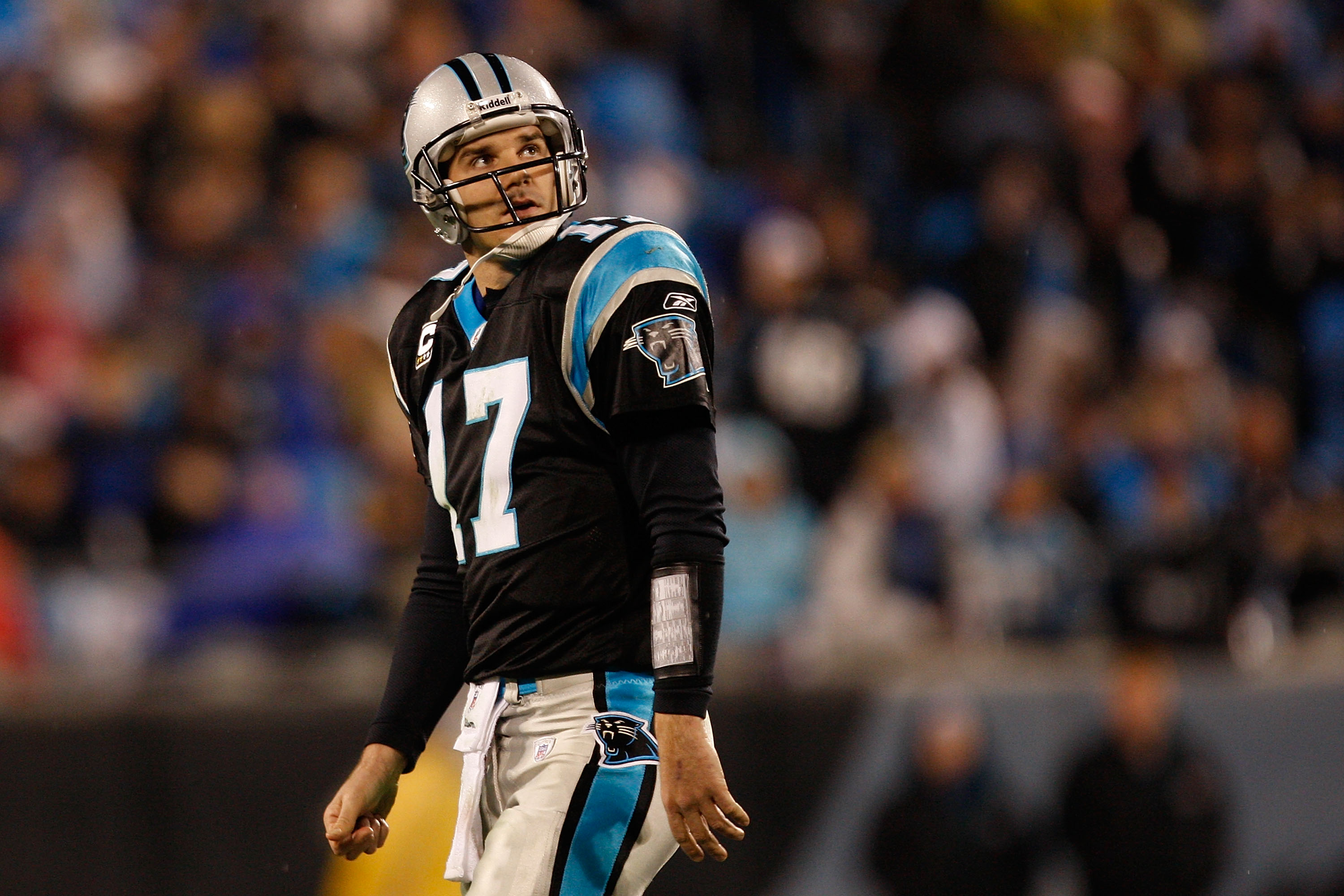 In this epic meltdown, Jake Delhomme threw five interceptions and lost a fumble against the Arizona Cardinals in a year when the Cardinals made the playoffs with a 9-7 record.

Delhomme's play was epic in its awfulness and the quarterback never really recovered mentally from this game.

His performance at the beginning of 2009 was so bad that he was eventually benched.

He spent 2010 with the Cleveland Browns mostly on the bench, injured in between bouts of playing and still not looking confident in anything he did. 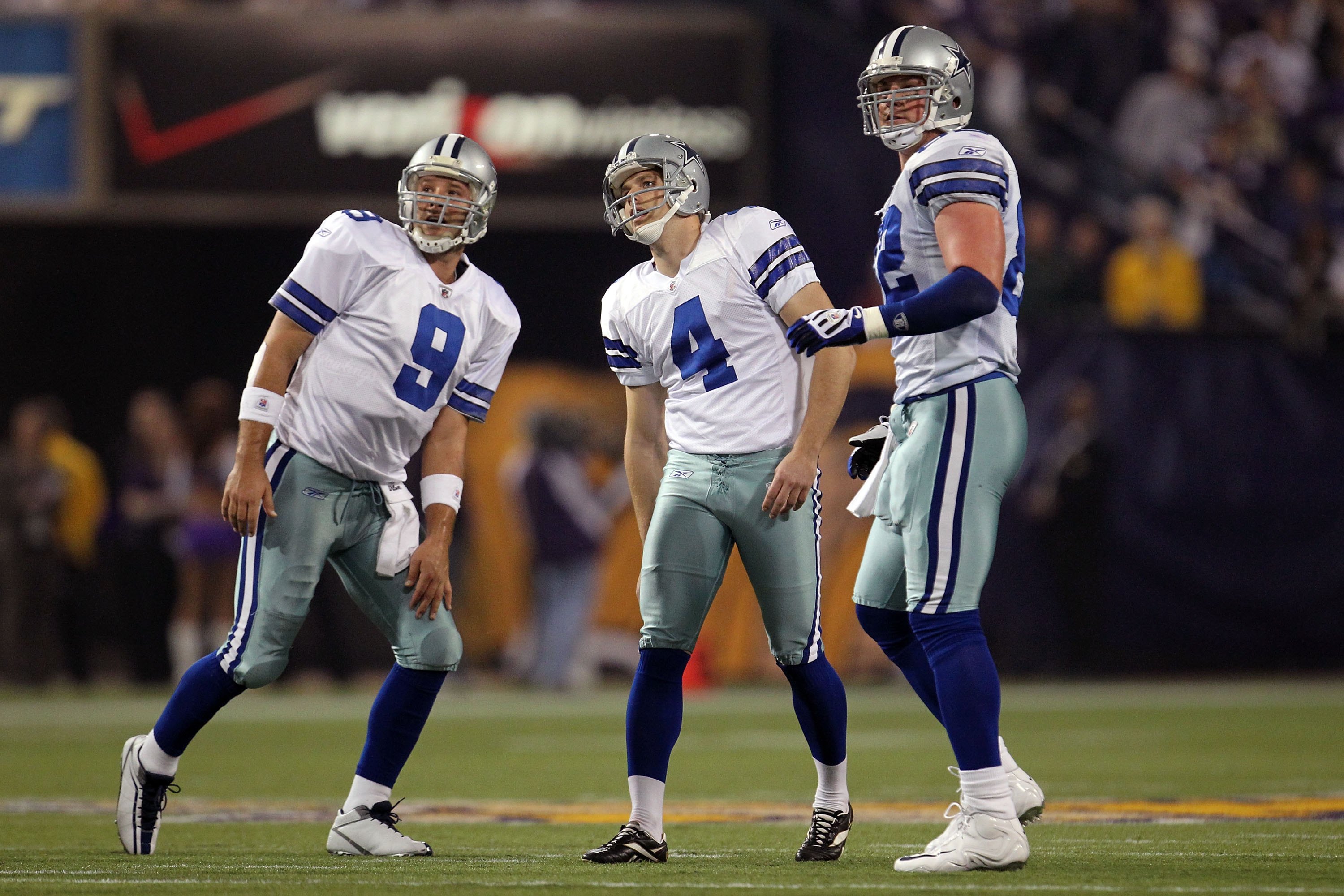 The Vikings destroyed the Cowboys in this divisional matchup in the 2009-2010 postseason.

The Cowboys offensive line, showing a preview of what was to come in 2010, could not stop the Vikings pass rush or hold a pocket long enough for Romo to do much of anything.

Romo made bad decisions under pressure and played poorly, and the Cowboys were done for the year. 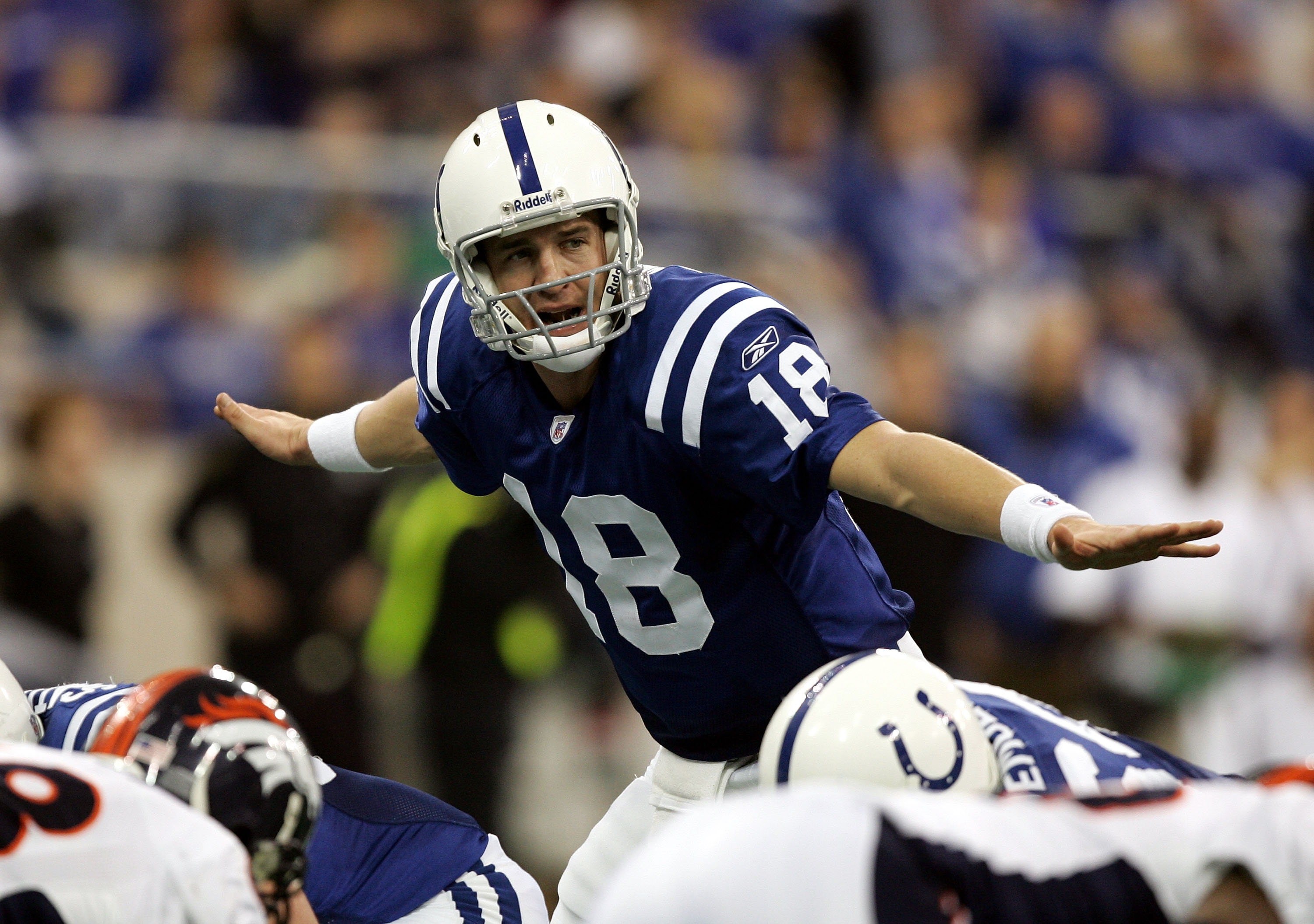 The Colts led 35-3 at the half of this Wild Card game and they scored a record seven touchdowns as they blew out the Broncos 49-24.

Peyton Manning threw four touchdown passes, had 457 yards through the air and he was just unstoppable.

The Broncos defense couldn't adjust to Manning's pace and the offense only showed a few signs of life in the third quarter, but it was too little, too late, as the Colts did whatever they wanted. 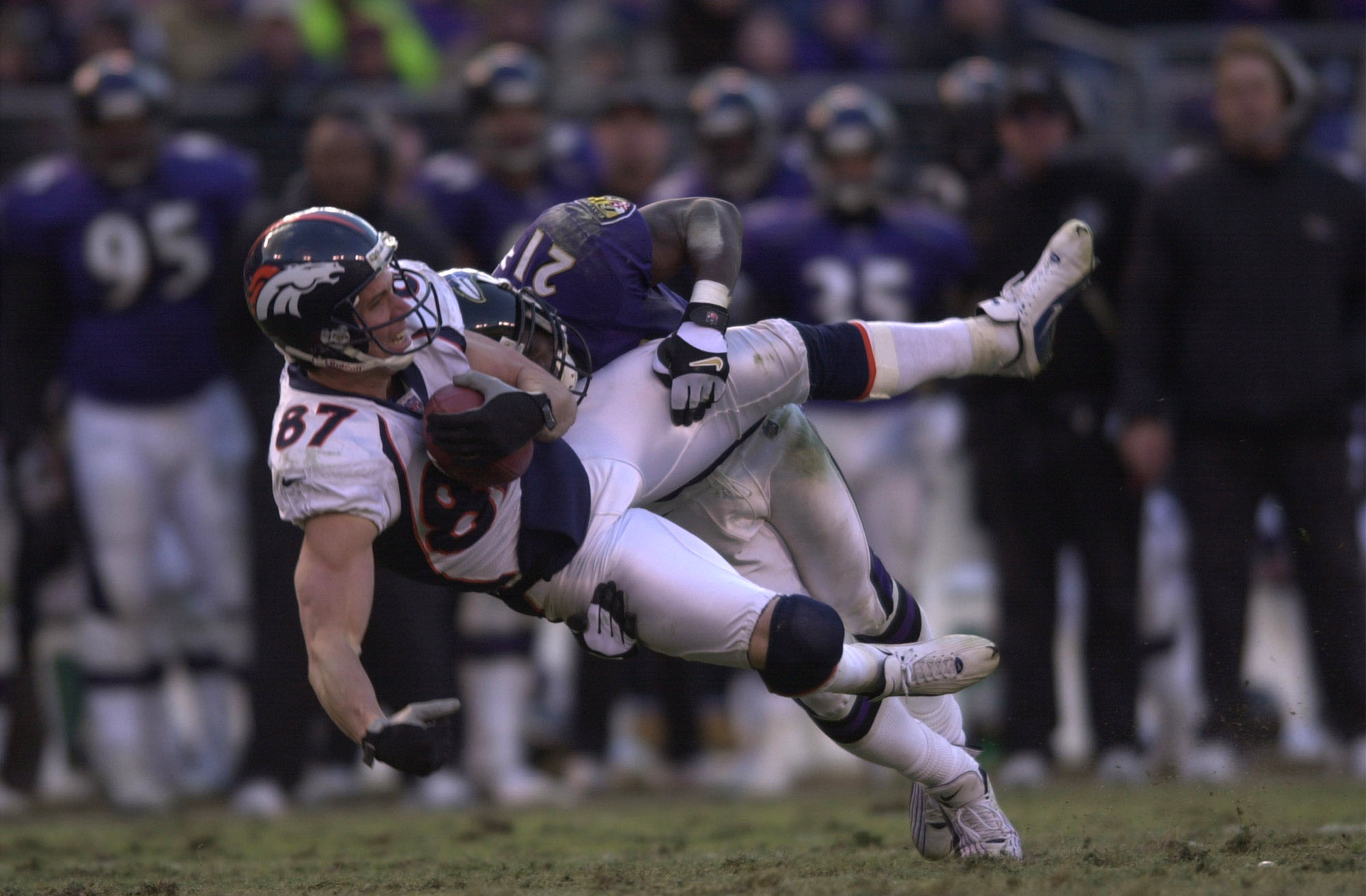 There's not a whole lot Broncos fans can say about the playoffs under Mike Shanahan once John Elway left, as there were a lot of bad losses.

This one, from 2000, wasn't the biggest blowout, but it was pretty ugly.

The Broncos offense managed only 177 total yards, nine first downs and one field goal. Gus Frerrotte was sacked five times and the Denver running game did not show up. 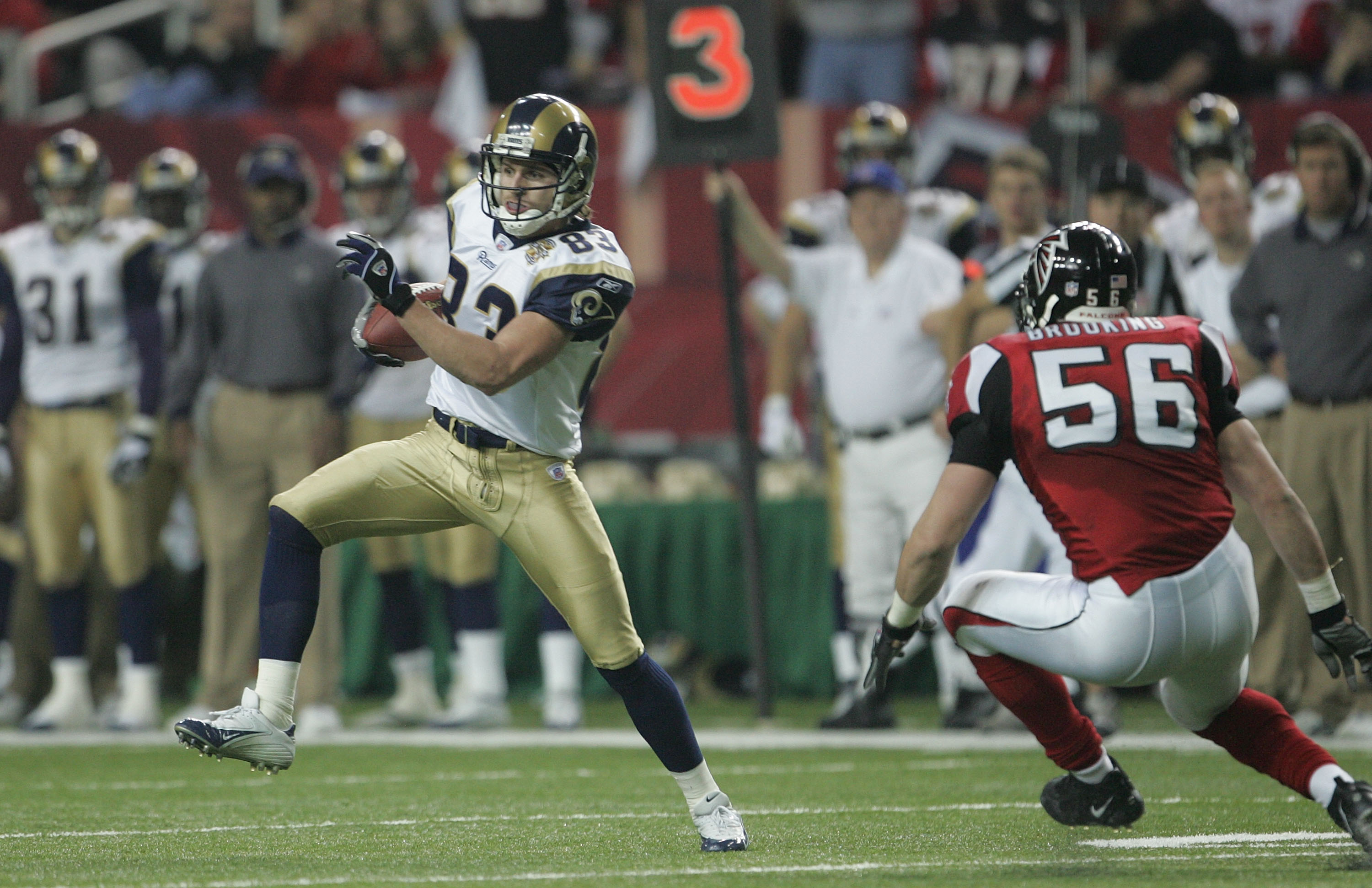 Michael Vick and the Falcons offense went nuts on the Rams, destroying them in a 30-point rout.

The Rams allowed 232 yards on special teams in addition to letting Michael Vick have a field day with the defense.

Marc Bulger was hounded all day and had an especially bad second half with a fumble, a pick and a sack in the end zone for a safety. 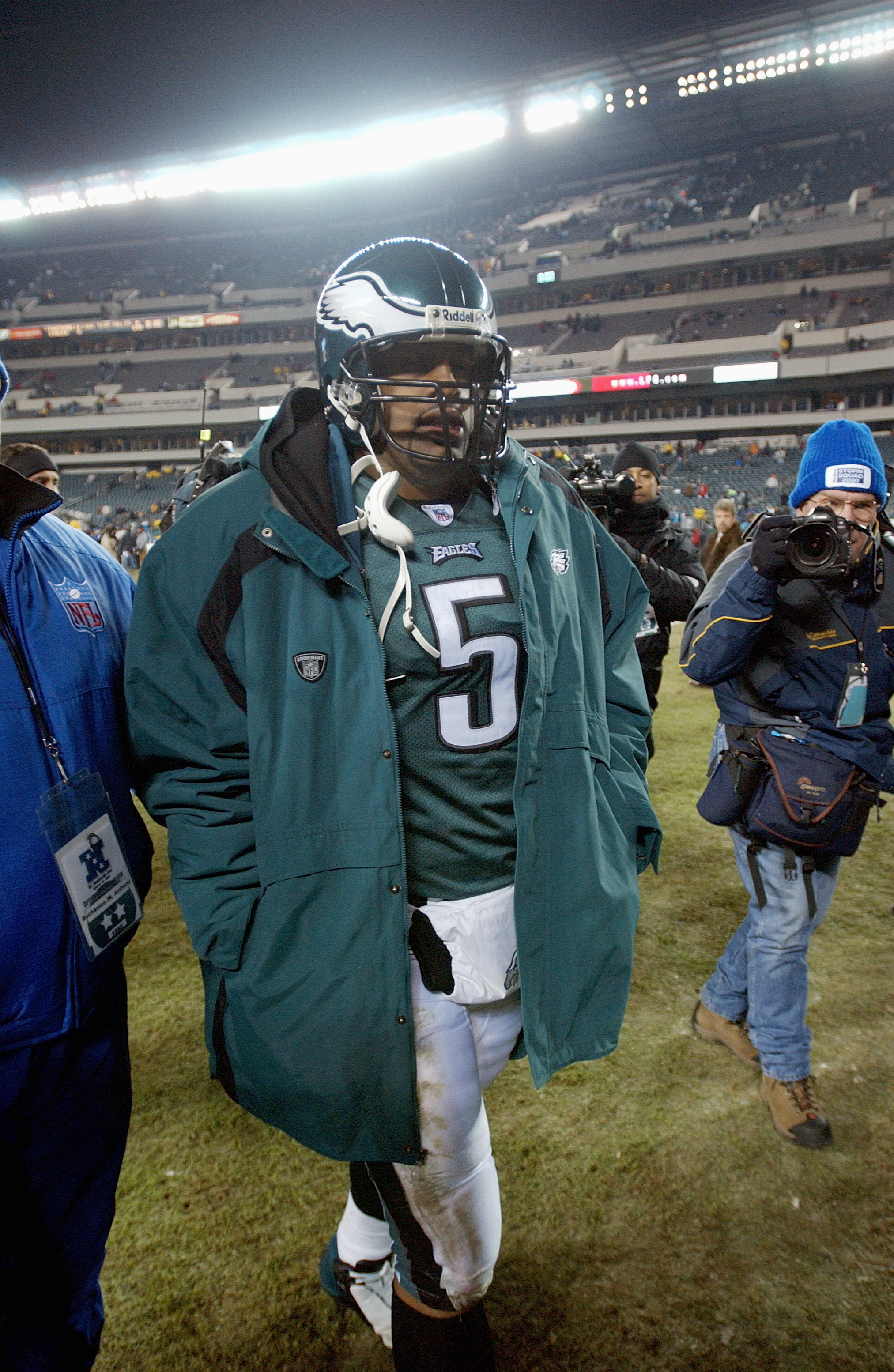 Donovan McNabb has built a legacy of choking in the playoffs. He may not do it in the first round—and one year he even made it to the Super Bowl—but sooner or later he chokes.

Since his choke in the Super Bowl is a matter of debate over whether he got sick or not, we'll leave it out.

Quite possibly his biggest choke performance, though, was Jan. 18, 2004, against the Carolina Panthers.

The Eagles held the Panthers to just 14 points, but McNabb could only muster 100 yards through the air, was picked off three times by rookie cornerback Ricky Manning Jr. and was sacked five times.

McNabb did sustain a rib injury in the game, but he's the one who decided to tough it out instead of admitting he no longer was mobile and probably wasn't as effective with his arm due to the rib injury.

Andy Reid finally replaced McNabb after the third interception, but it was too little, too late at that point for the Eagles. 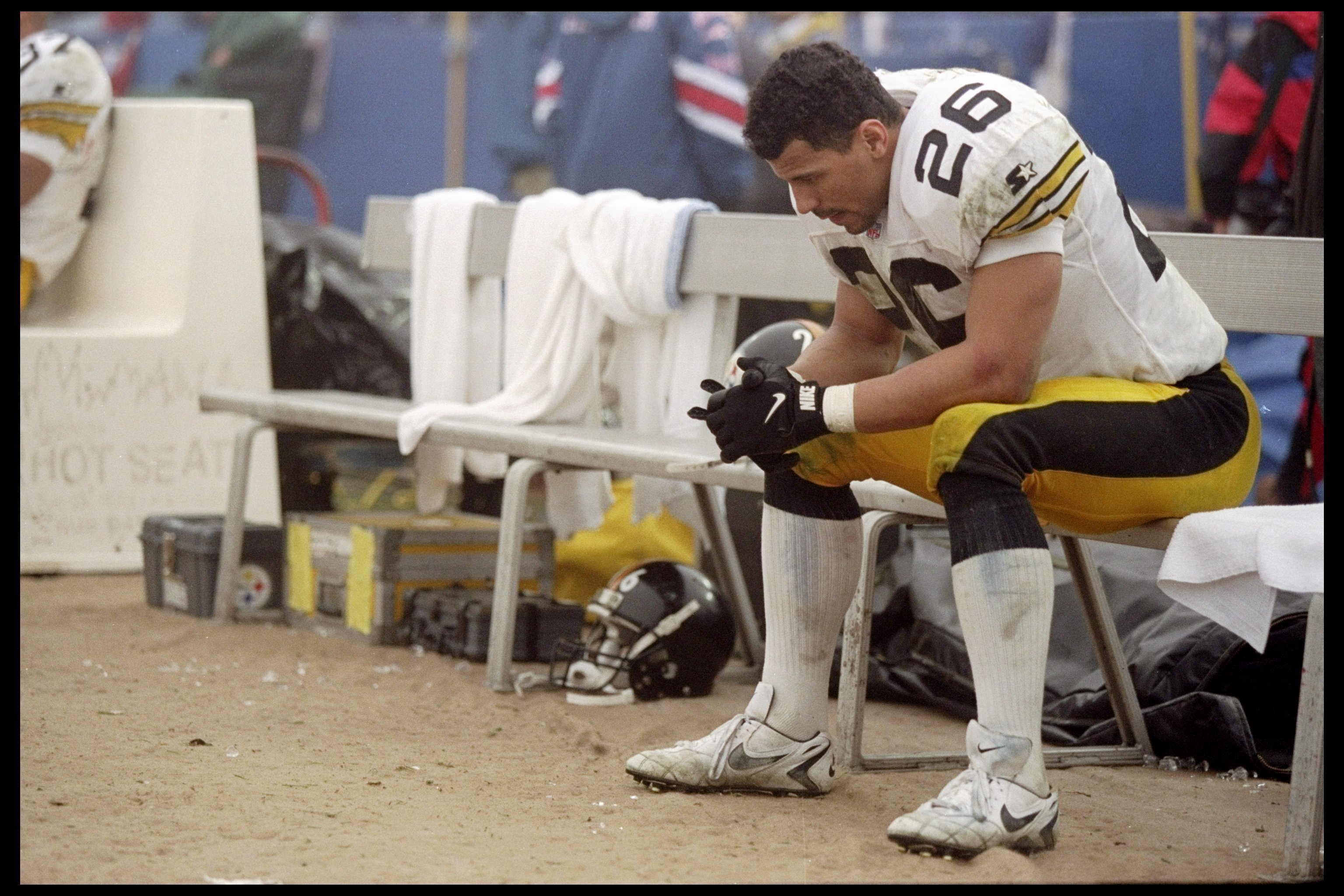 The Patriots took out the Steelers by beating them at their own game.

New England's defense kept the Steelers out of the end zone and held them to one field goal.

Steelers quarterback Mike Tomczak was held to 110 yards passing and was picked off twice during the game, while Patriots running back Curtis Martin scored three touchdowns. 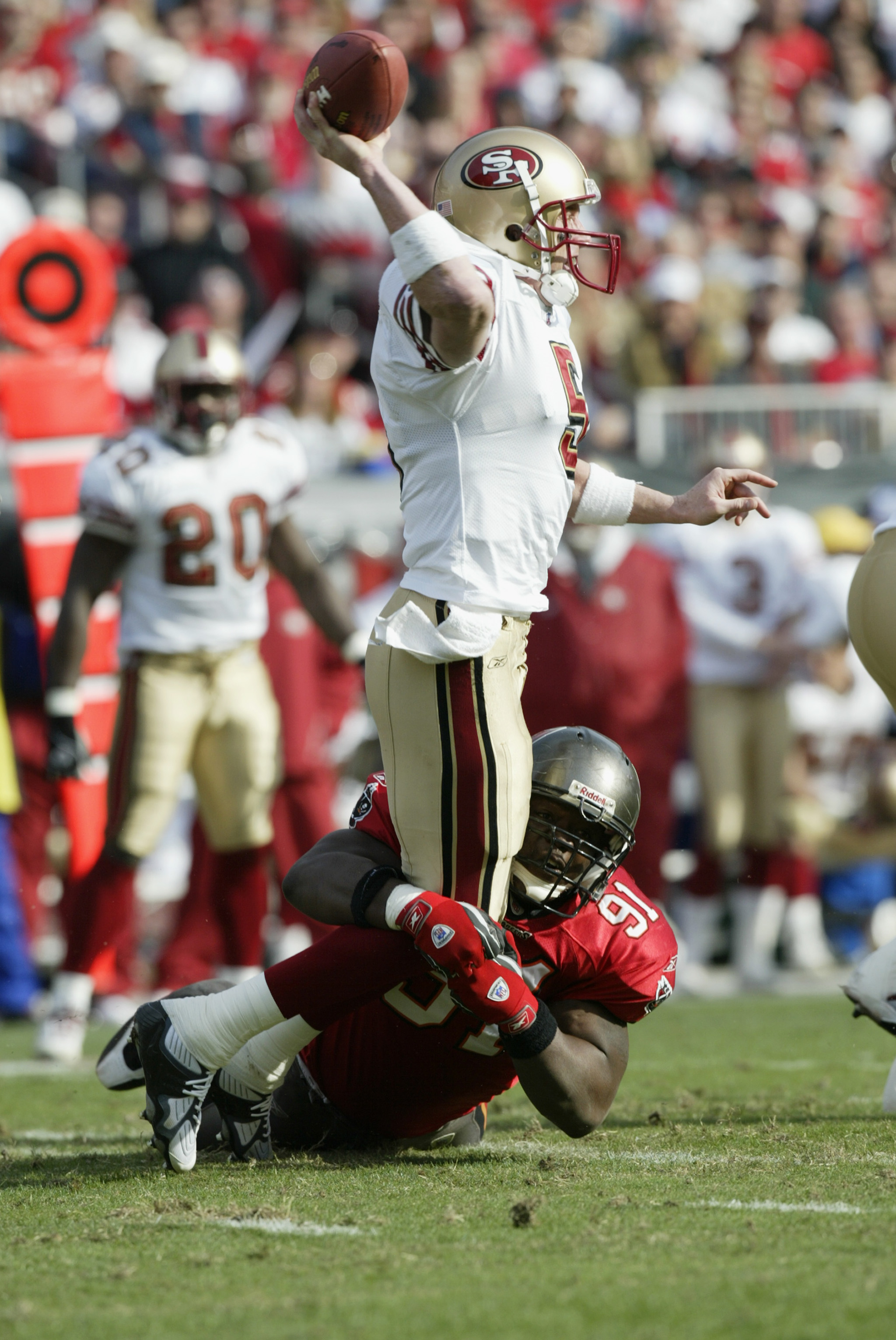 Jeff Garcia was sacked four times, the 49ers turned the ball over five times and the offense only managed to put up two field goals.

The 49ers defense was completely ineffective against Jon Gruden's Tampa Bay Buccaneers, and the Bucs would go on to win the Super Bowl that year. 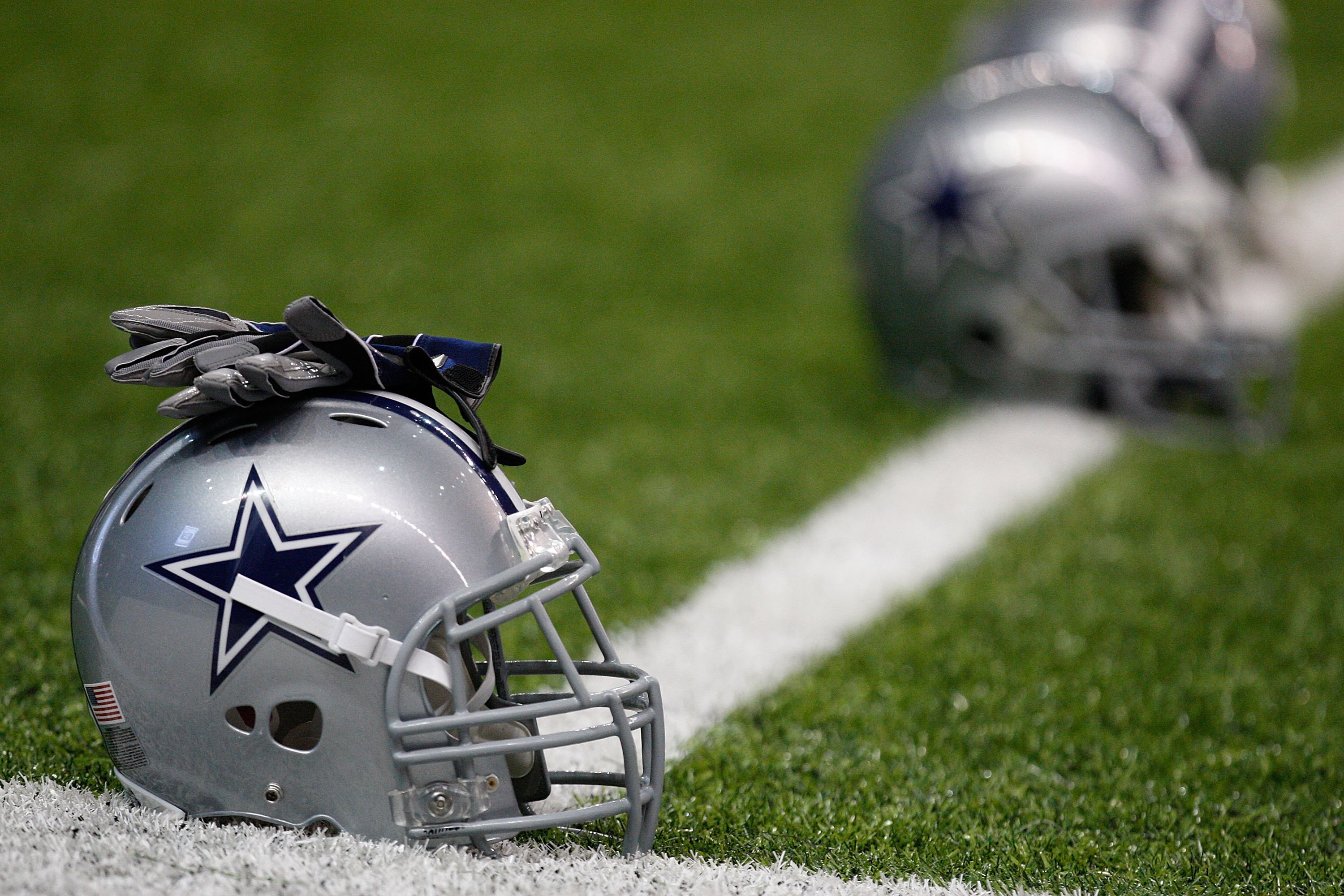 The Dallas Cowboys weren't quite ready for their run of Super Bowls after the 1991 season, and they got dominated by the Detroit Lions, which ended up winning their only postseason game since 1957 that year and they still have yet to win another one.

The Cowboys managed two field goals the whole game while quarterback Steve Beuerlein had just 91 yards passing with one interception. 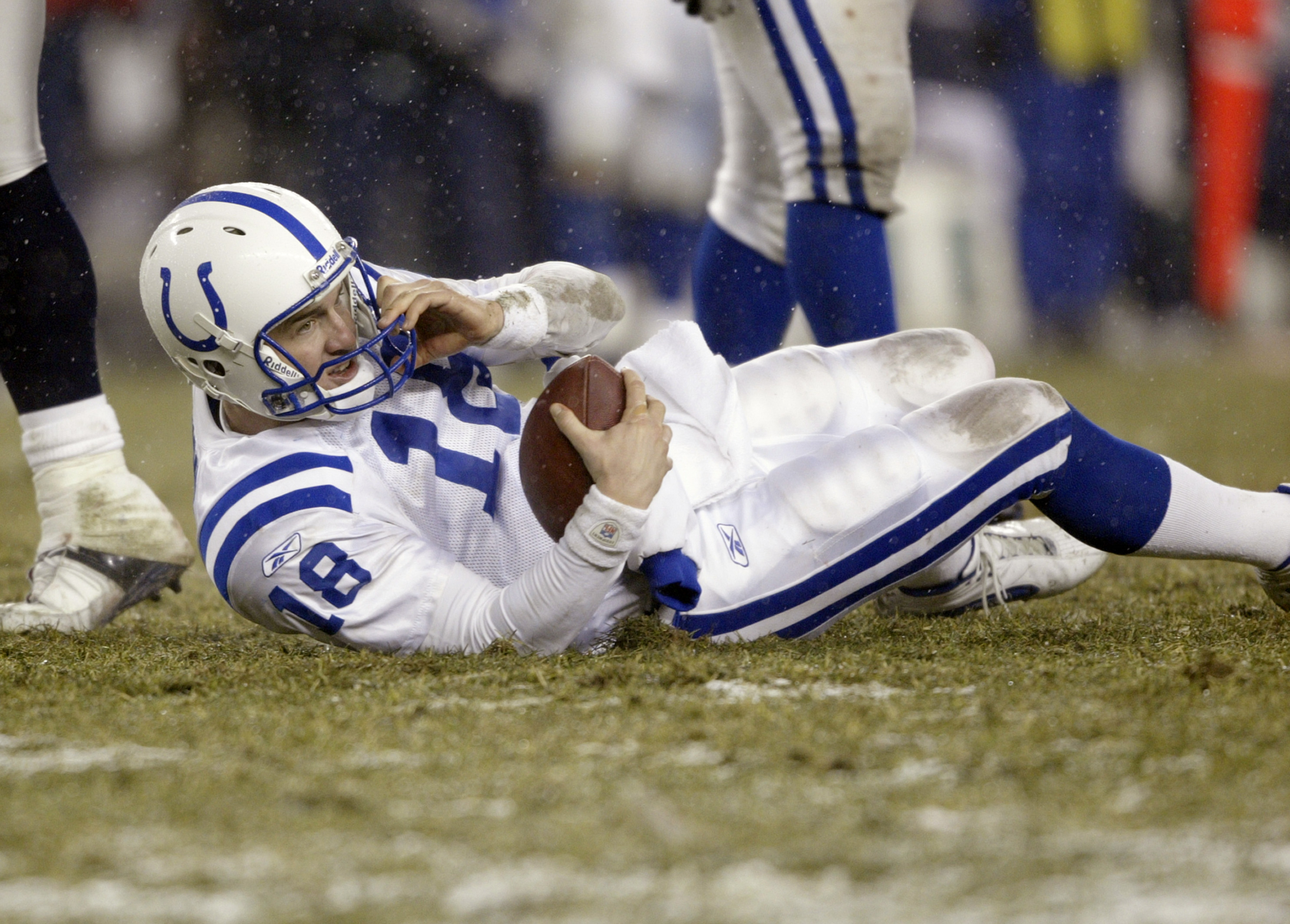 While the score was close, this was probably Peyton Manning's worst playoff game in his career.

Manning threw four interceptions, three of them to Ty Law, as the Patriots secondary seemed to know what Manning was going to do before the ball was even snapped.

The Patriots also were helped out by favorable officiating and this game comes up in the Spygate discussions concerning the Patriots' defense almost appearing to have the Colts playbook at times.

Those arguments aside, Manning had a bad day and Patriots fans love to bring this game up whenever a Patriots versus Colts matchup is brought up for discussion. 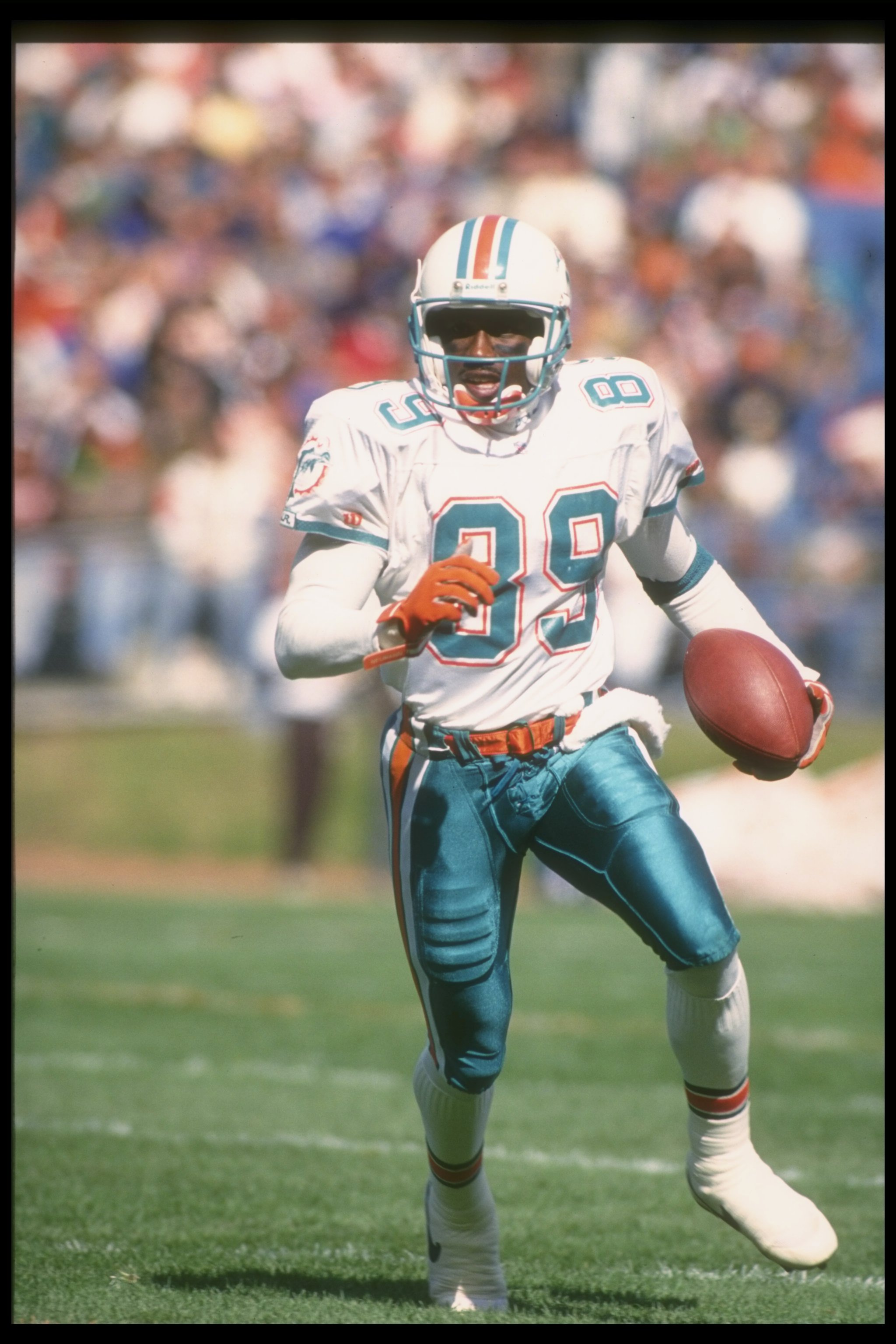 Humphries got limited to 140 yards in the game and the Dolphins completely dominated the Chargers.

However, the Dolphins would lose to the Buffalo Bills the next week in the AFC Championship Game. 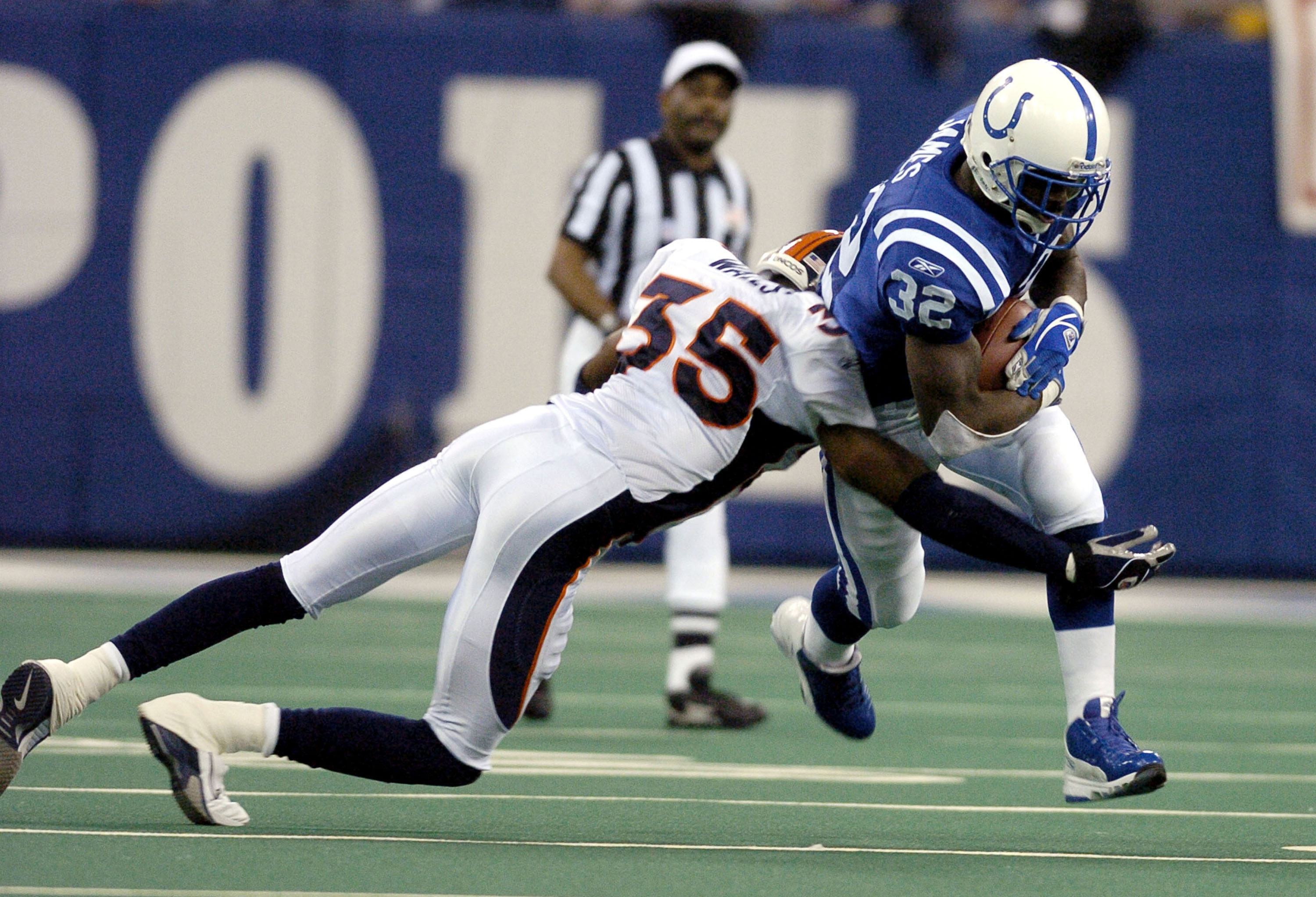 Peyton Manning had a perfect passer rating, throwing five touchdowns on a Broncos secondary that didn't even look like it belonged on the same field as the Colts.

One touchdown pass to Marvin Harrison came after Harrison fell down, but since no one touched him, he got up and ran into the end zone.

Broncos quarterback Jake Plummer had a bad day, throwing two picks and giving up a fumble. The Colts blocked a 46-yard field goal, and the Broncos didn't score their first touchdown until the middle of the fourth quarter. 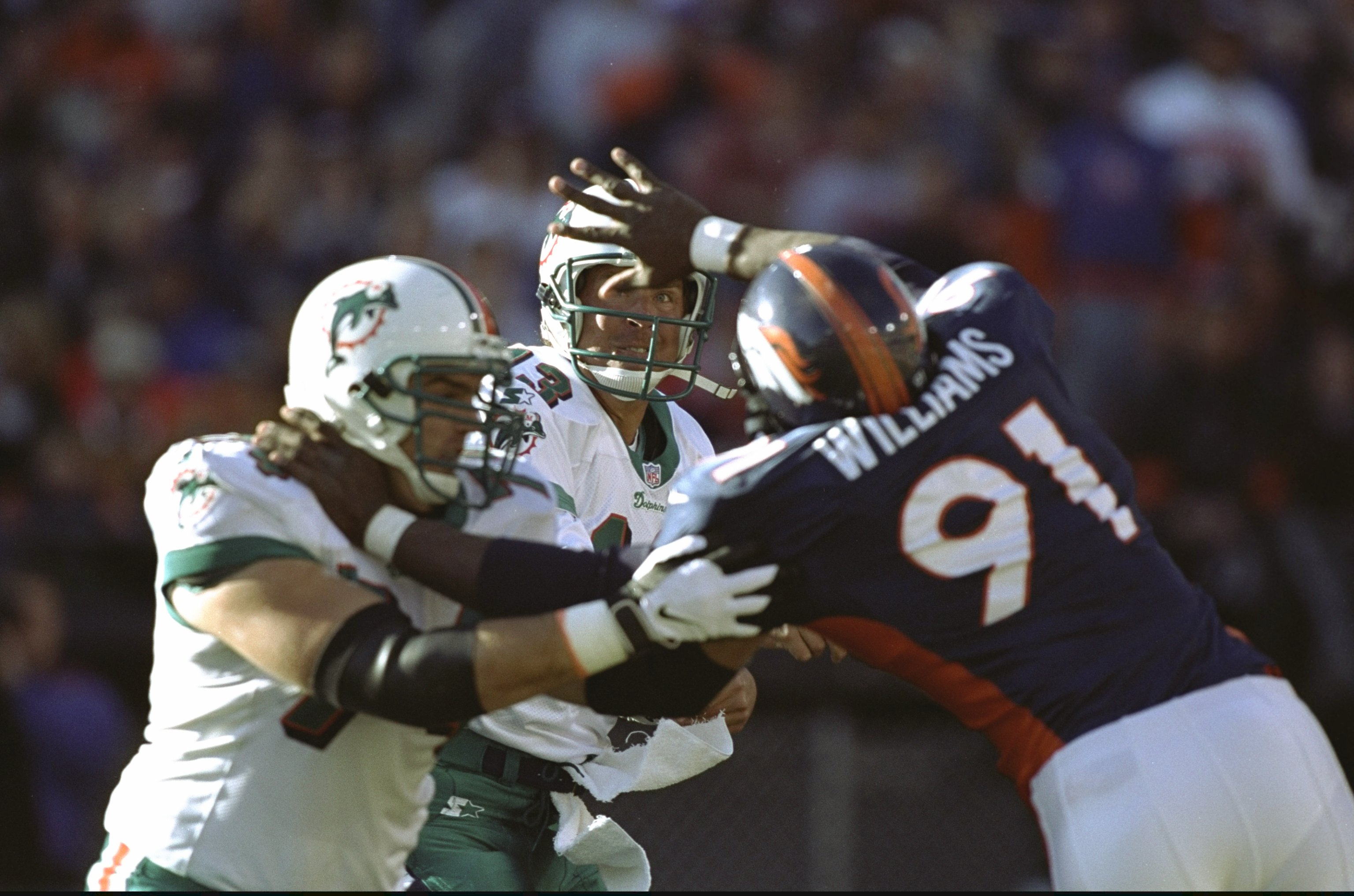 The first postseason meeting between Dan Marino and John Elway did not go so well for Marino. The Broncos outgained and outscored the Dolphins from the opening kickoff to the final whistle.

Kicker Olindo Mare gave the Dolphins their only points on the day.

Marino threw for 243 yards, but could not lead his team to a single touchdown and was intercepted twice. 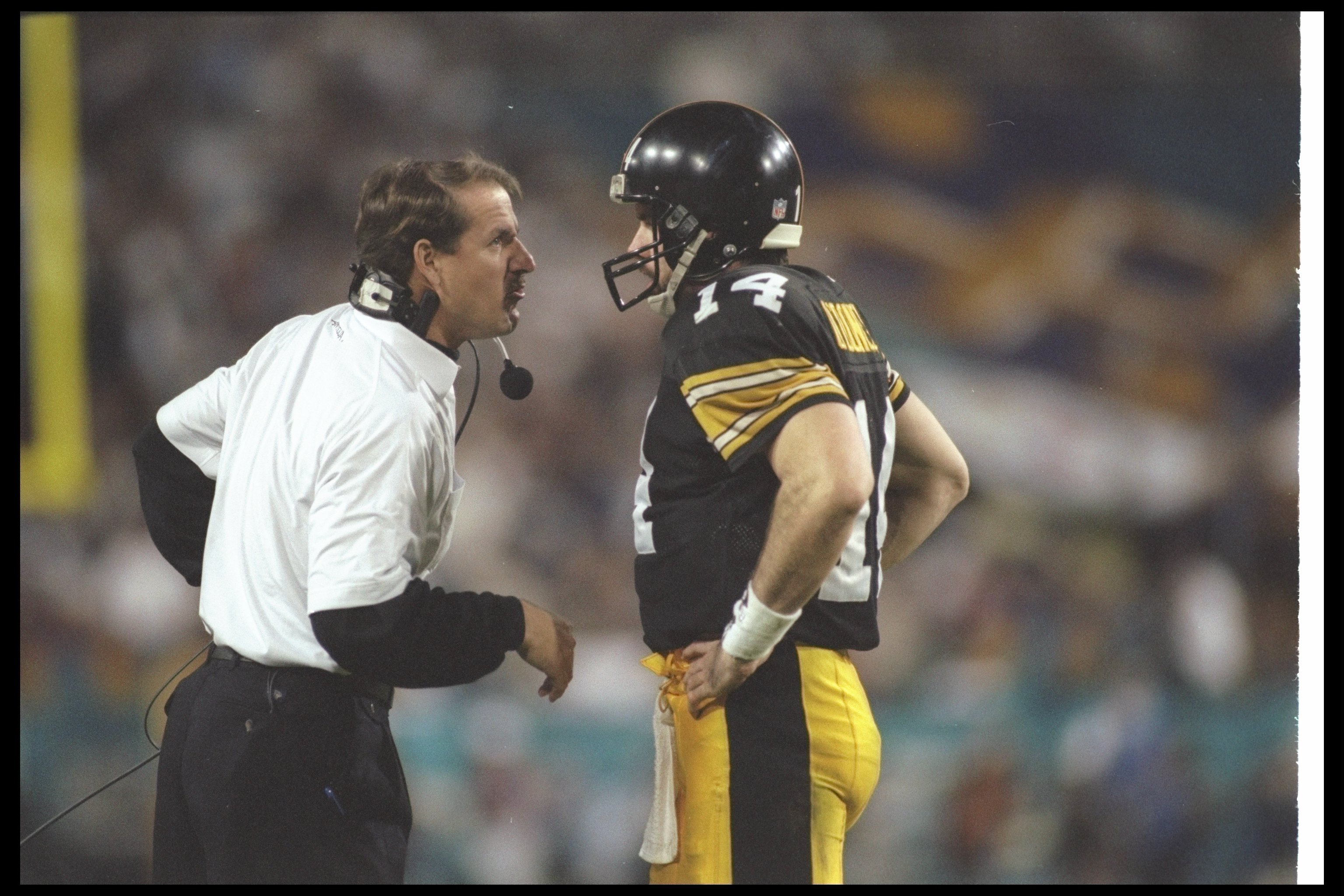 The Steelers took on the Cowboys for a third time in the Super Bowl, the first time since the 1970s, and the game was very competitive in the first half.

But then halftime happened.

Steelers quarterback Neil O'Donnell must have been traded to the Cowboys during the intermission, or at least that's what a lot of Steelers fans will swear happened, as he came out after halftime and threw three interceptions, two of which resulted in Cowboys touchdowns.

O'Donnell's second half meltdown still vexes Steelers fans today. His career in Pittsburgh was over as he was allowed to enter free agency, signed with the Jets, played poorly and pretty much never was heard from again. 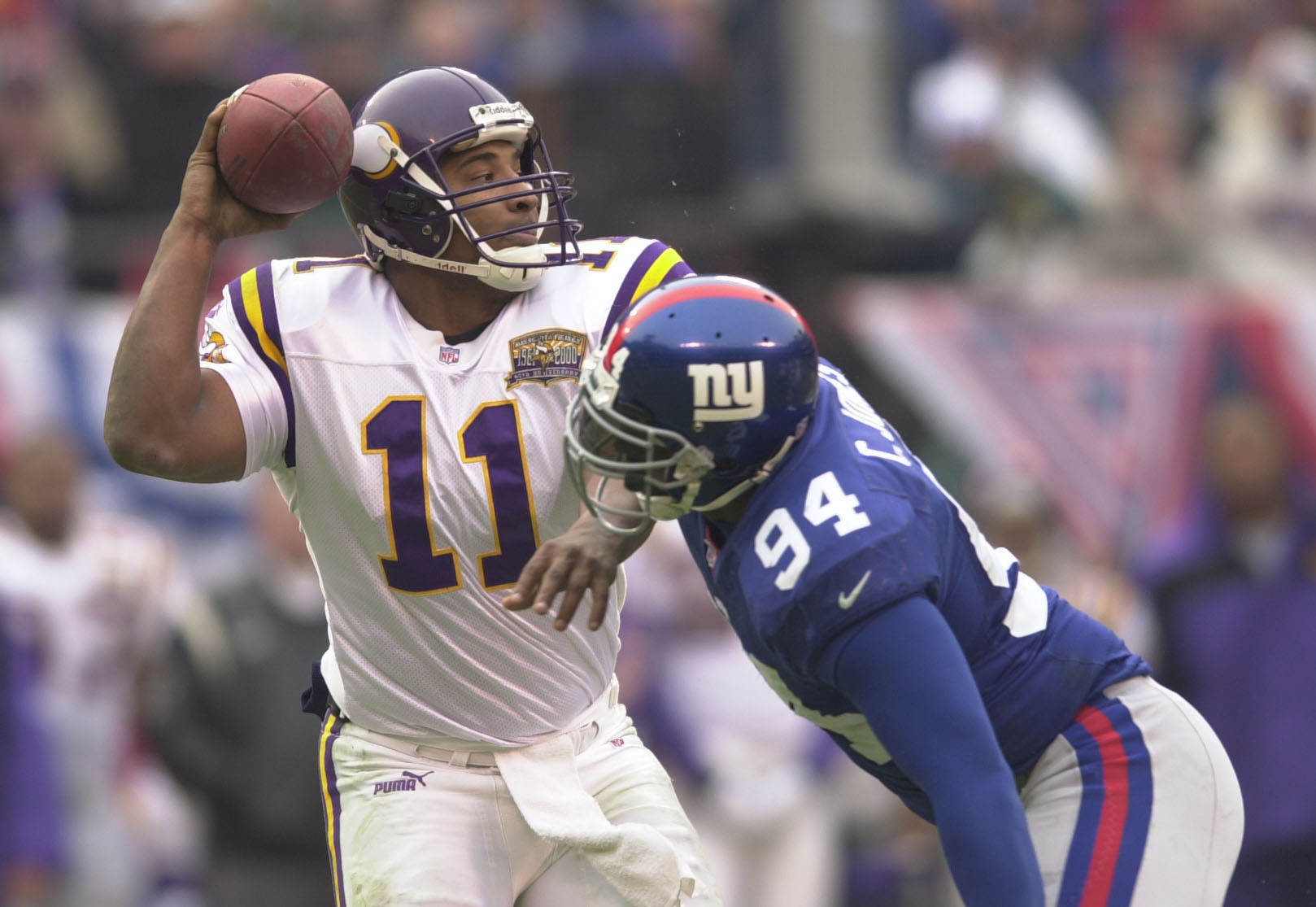 Kerry Collins, then quarterbacking the Giants, threw for 381 yards and five touchdowns as the Vikings defense rolled over and died.

The Giants were up 14-0 before the Vikings offense ever stepped on the field. Rookie Daunte Culpepper only found Randy Moss twice for 18 yards and couldn't get the Vikings into the end zone. 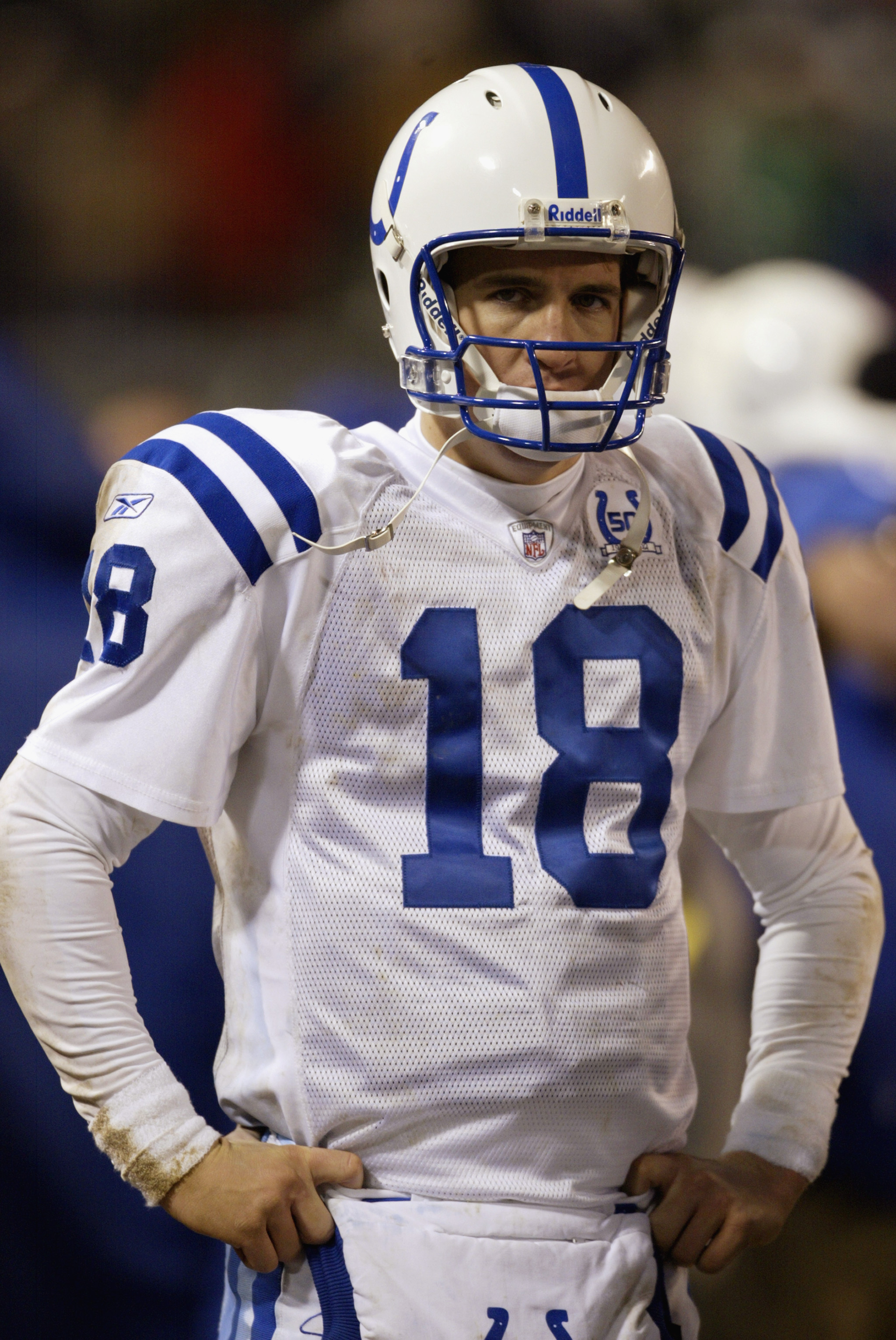 While this game wasn't all on Peyton Manning, the offense obviously failed to score.

But the Colts defense that day didn't get the memo about when the game started and the Jets proceeded to romp all over the Colts.

Chad Pennington had three touchdown passes and LaMont Jordan had 102 rushing yards on the day. 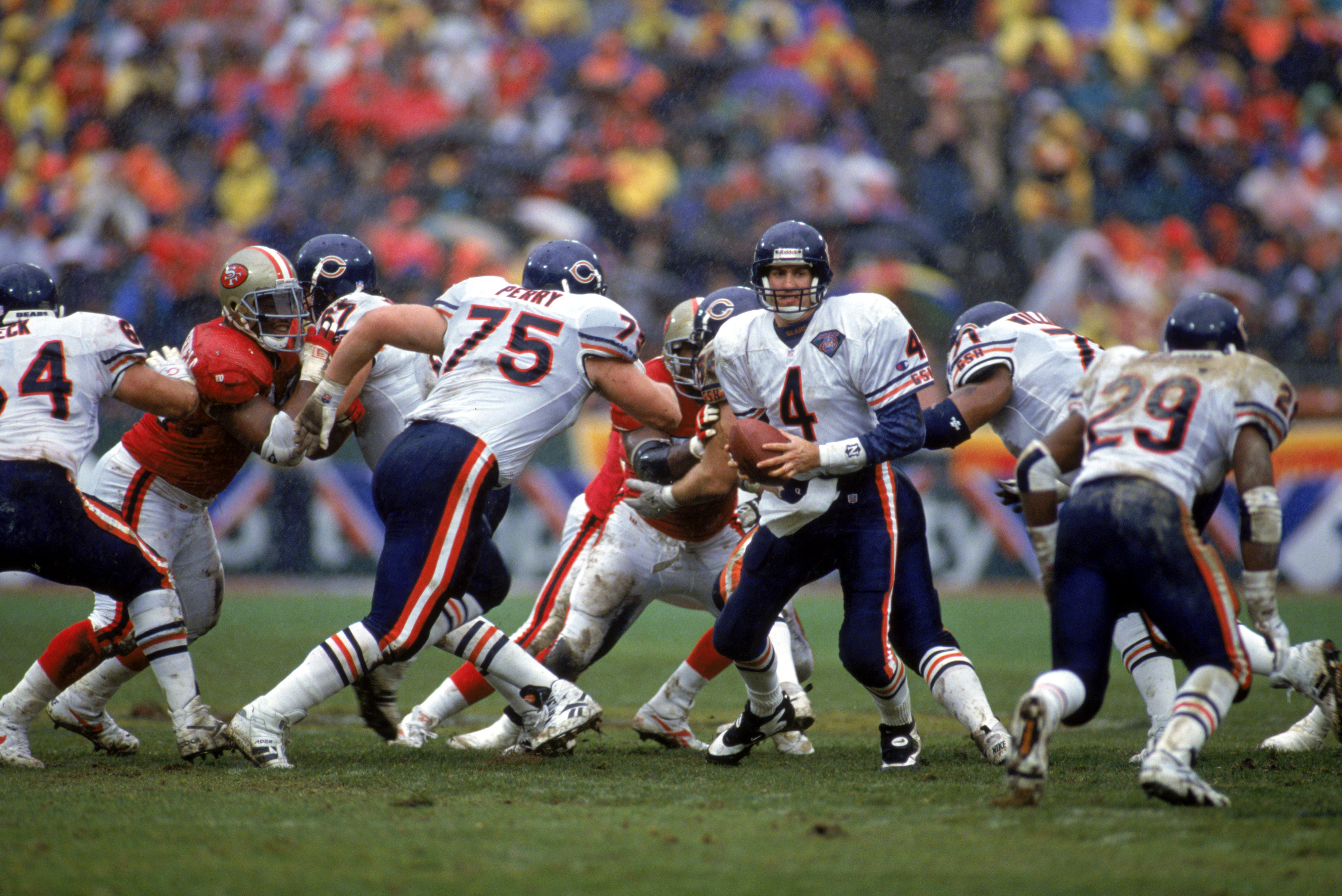 This game started out OK for the Bears after they scored first on a fumble recovery.

But the 49ers then scored 37 points without a peep from the Bears. The Bears' only other points came in the fourth quarter after the 49ers had pulled their starters.

Yes, the 49ers pulled their starters in a playoff game. It was that bad. 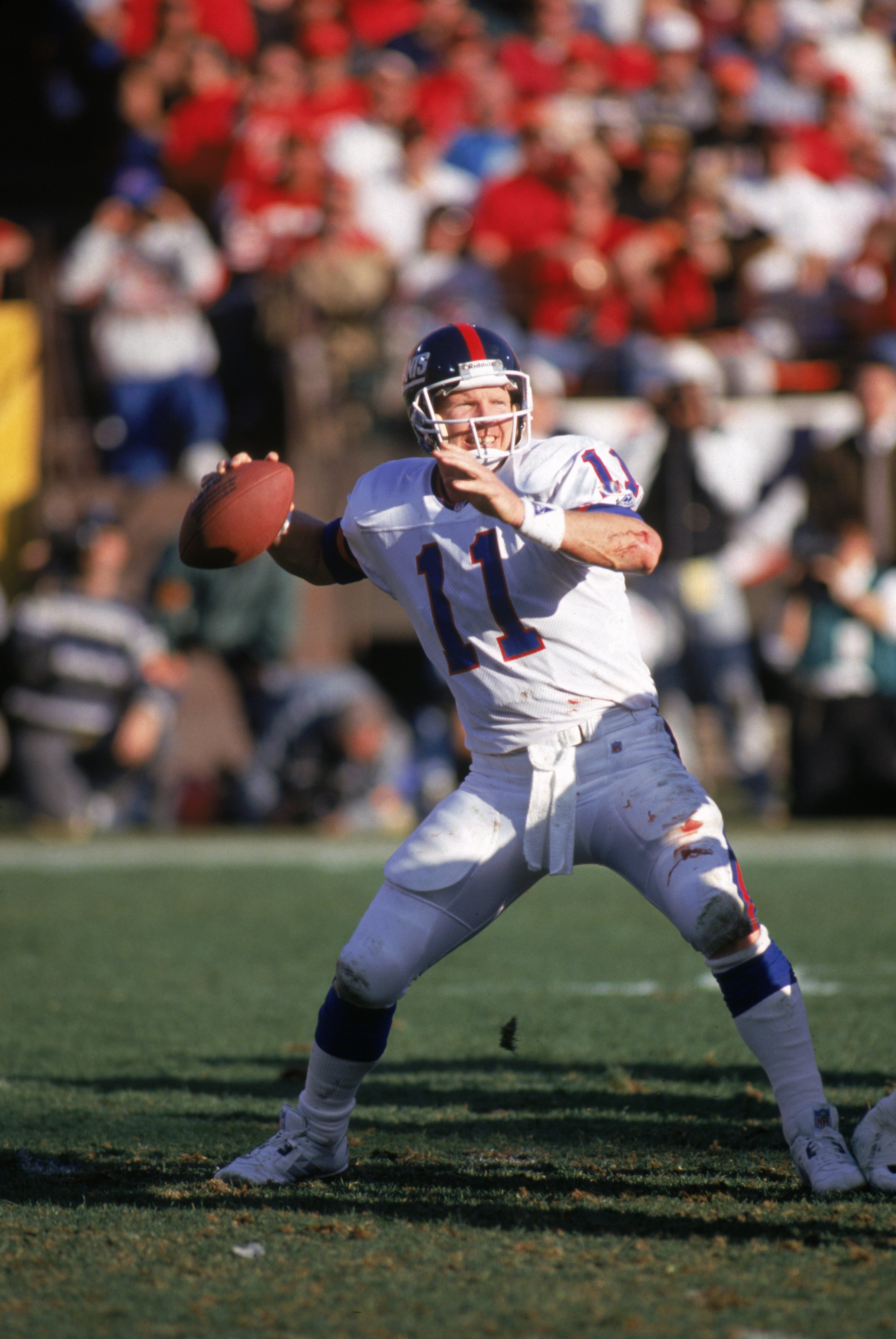 The Giants only could muster 41 total rushing yards and Phil Simms got intercepted twice in what would be the last game for both him and legendary linebacker Lawrence Taylor.

The 49ers' Ricky Watters couldn't be stopped, rushing for 118 yards and five touchdowns.

It was a bad end to two great careers. 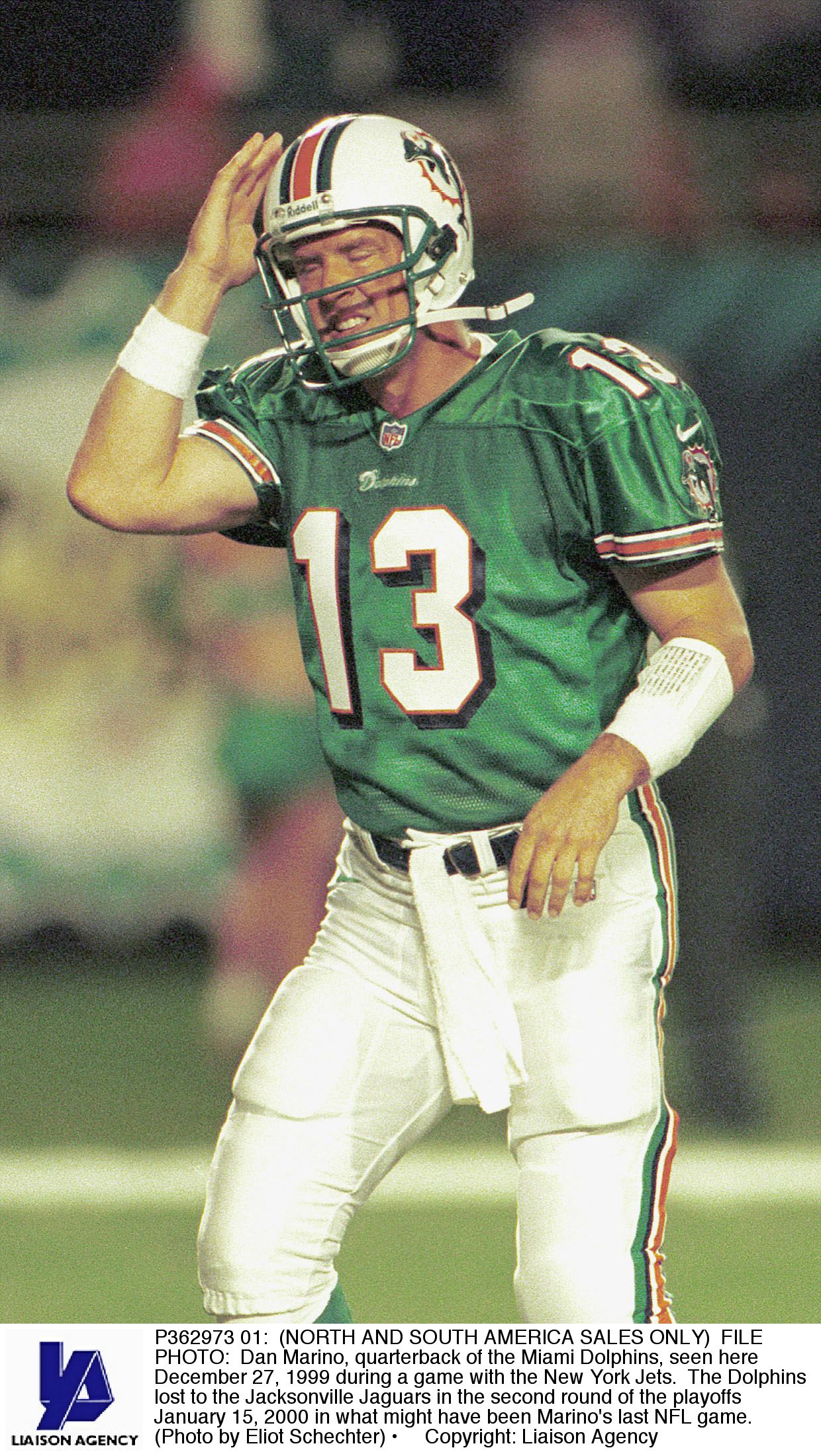 Dan Marino had one more chance to get that elusive Super Bowl ring and finish his career on a high note.

Marino went 11-for-25 for 95 yards and one touchdown, with two interceptions and a fumble that was returned for a touchdown. 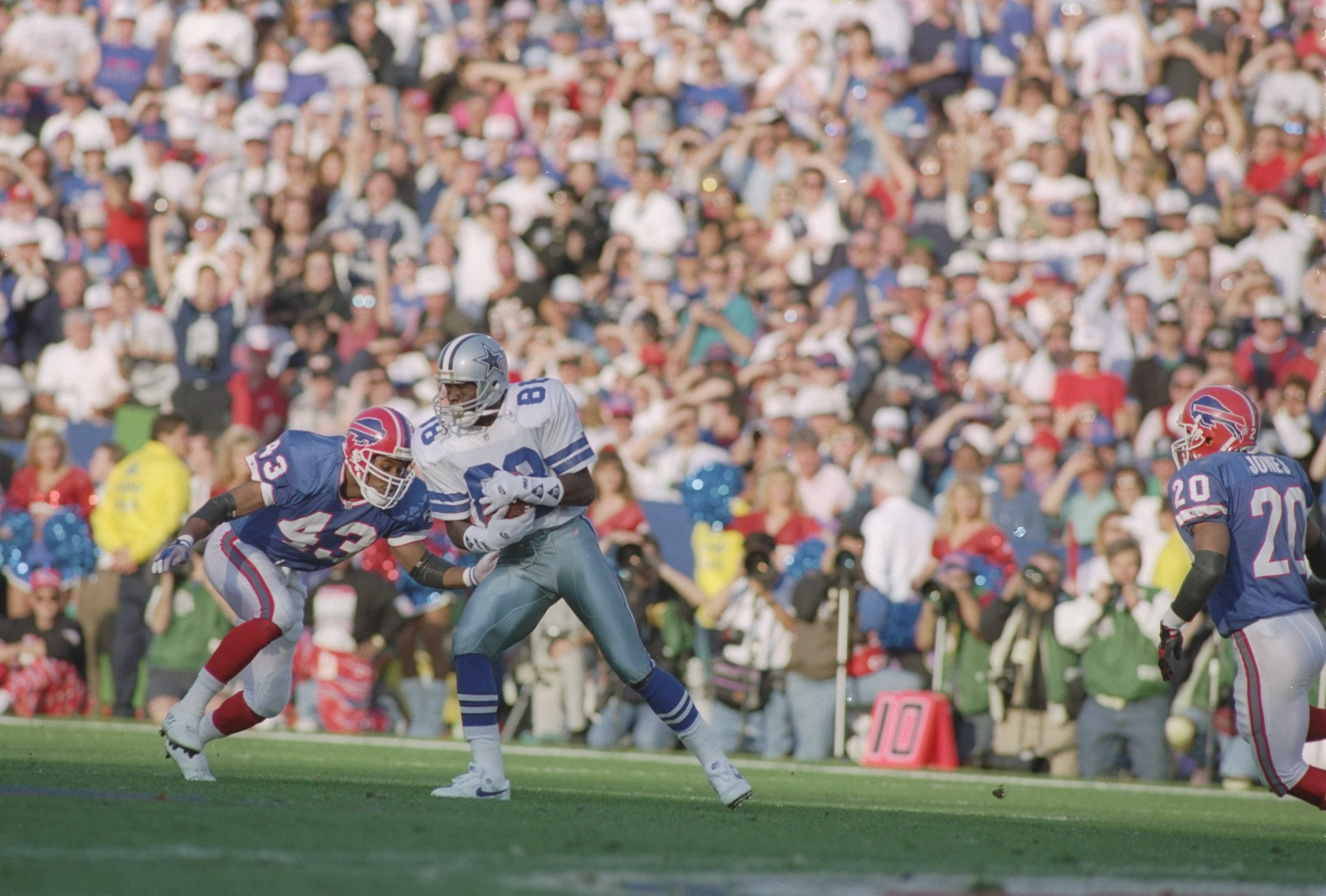 It was the third of four losses in the Super Bowl, and probably the worst of the bunch, as the Bills committed nine turnovers—a Super Bowl record—on the way to their humiliating defeat

The turnovers came by way of four picks and five fumbles and the Cowboys blew out the Bills 52-17.

However, this game is most remembered for Cowboys defensive lineman Leon Lett's fumble recovery, rumble down the field and subsequent showboating at the goal line before Bills wide receiver Don Beebe made a great play in batting the ball out of the defensive lineman's hands at the one-yard line and through the end zone for a touchback. Lett would have scored a touchdown had he not bragged.

It made no difference in the game, but Lett never lived that play down.