NHL: The Top 10 Worst Pittsburgh Penguins of the Last 10 Years 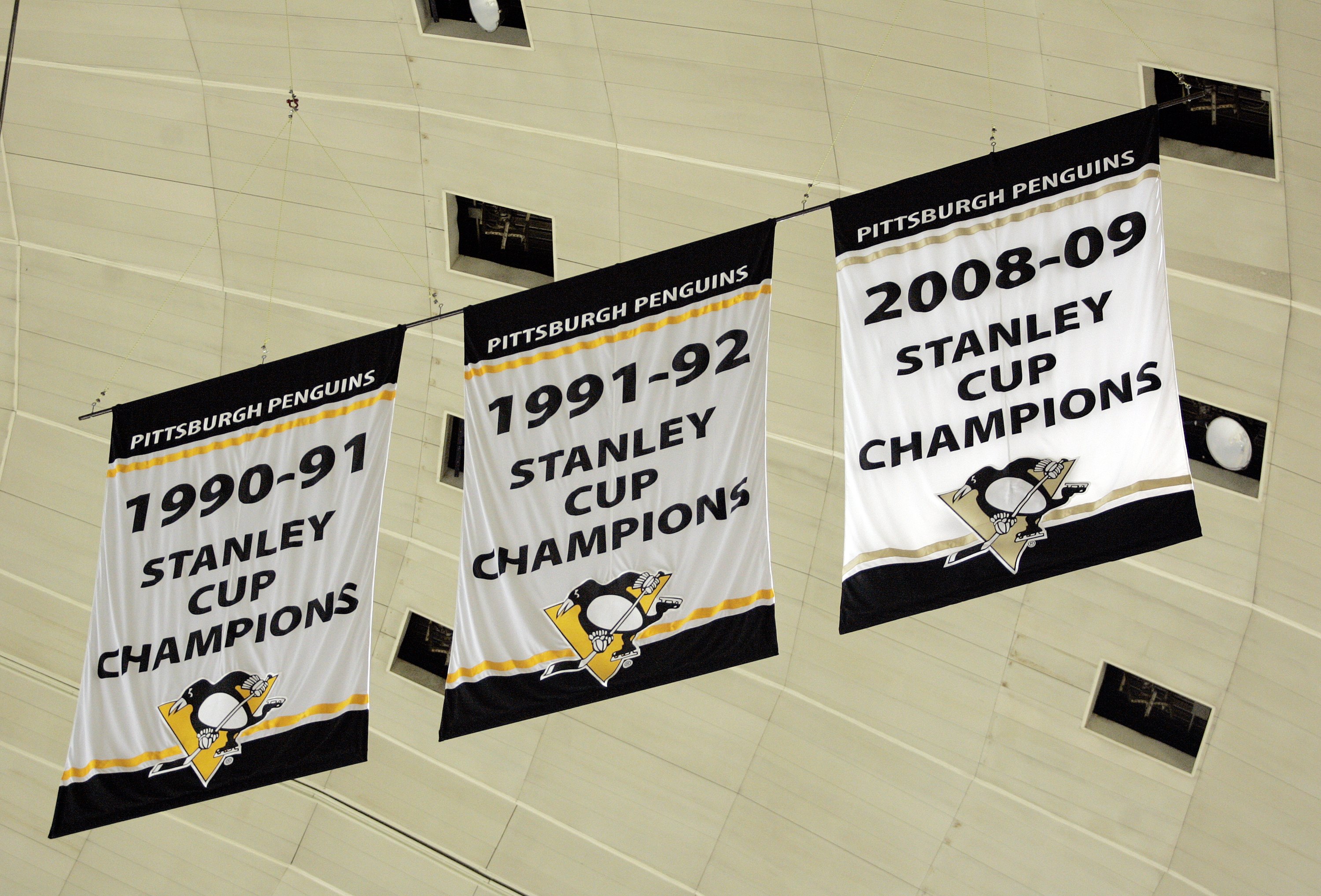 The Pittsburgh Penguins are only two seasons removed from their last Stanley Cup championship, have the greatest player in the world as their center, and have a supporting cast of Jordan Staal, Marc-Andre Fleury, and Evgeni Malkin.

Along with their new-found success has come a new generation of Penguins fans who don't know of the hardships long-time Pens fans suffered during the "dark ages" (2002-2006).

Well, fear not, because we are going to take a look at the worst Penguins since 2001... 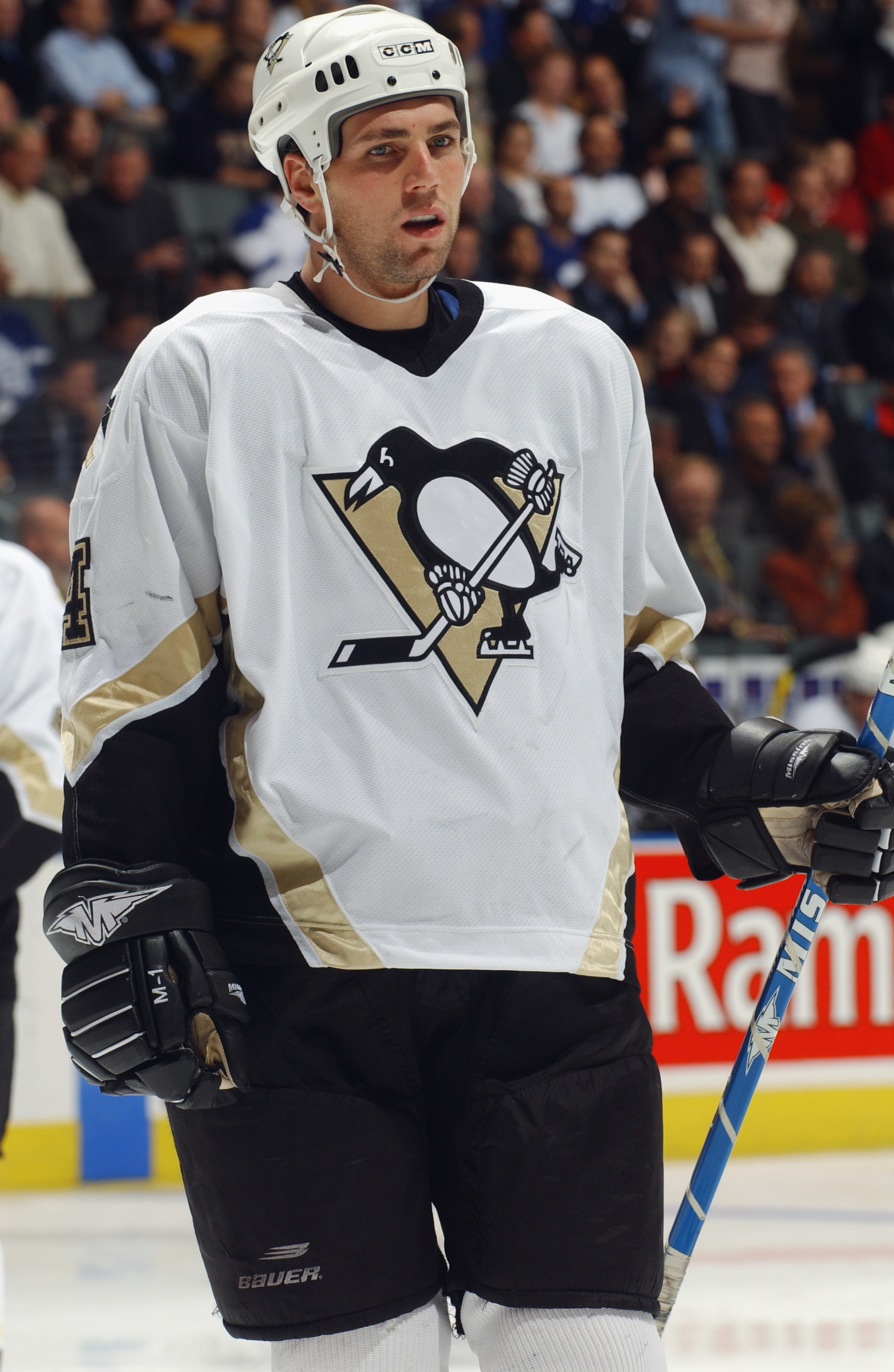 "Hey, how did that puck get in the net?"Dave Sandford/Getty Images

While most Penguins fans have blocked this defenseman out of their minds, a simple mention of his name is enough to send chills down their spine.

Notoriously bad with the puck, Focht made every single fan in the arena nervous when he handled the vulcanized rubber.  His lack of speed and positioning more than contributed to his -23 rating during 52 games with the club in 03-04.

Danny wasn't much of a passer, or hitter, or shooter, or shot blocker, but hey...I bet he tried really hard. 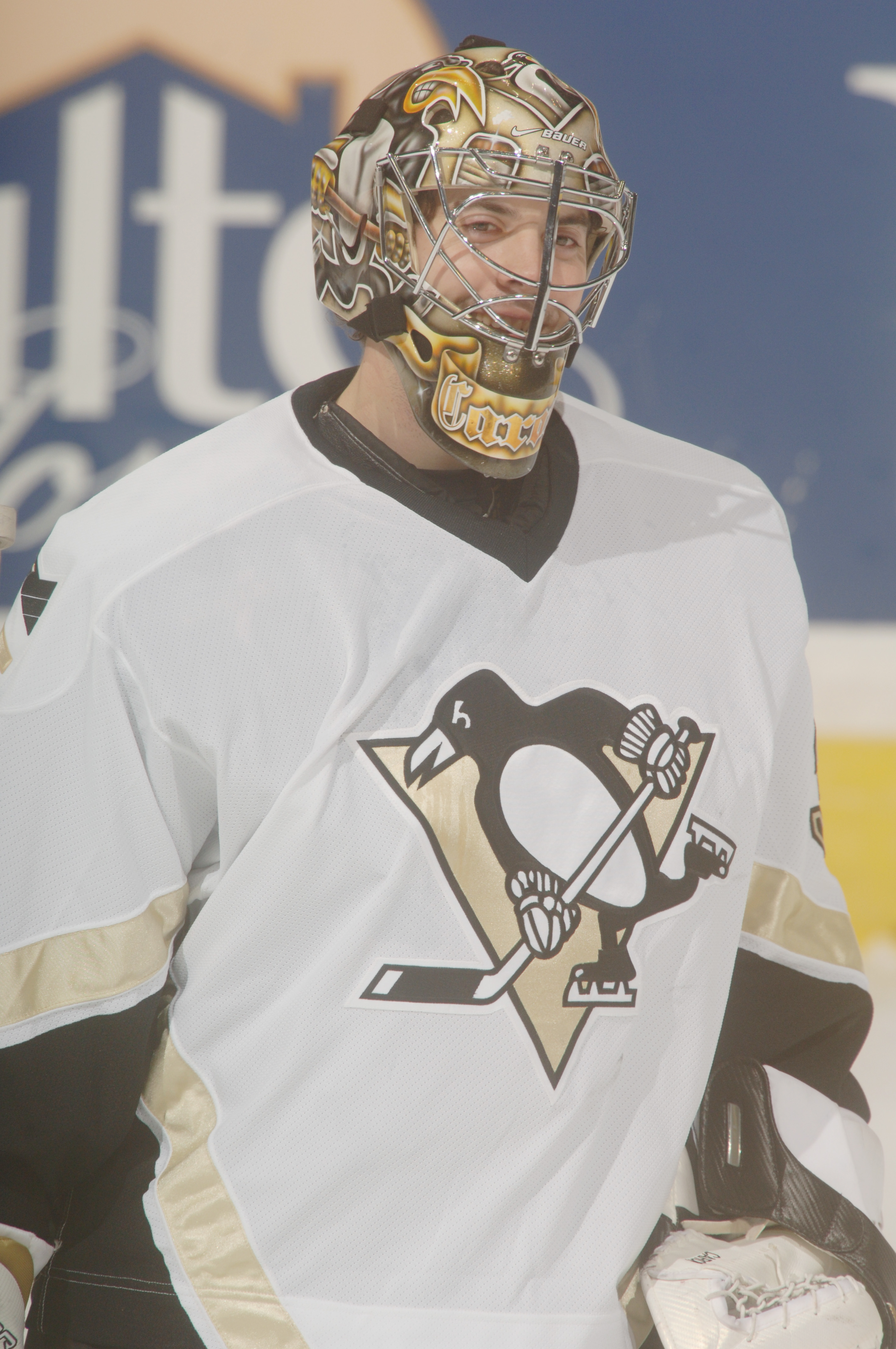 A goofy smile doesn't make up for those 4 goals you gave up in the first period, Caron.Mitchell Layton/Getty Images

While it's certainly not fair to blame Pittsburgh's failures during this time period on the goaltending, the group certainly did not help the situation.

Witness Caron, who is forever entrenched in Penguins highlight reels because of a beautiful save on Brian Savage of the hated Philadelphia Flyers.  Also witness Caron giving up a 170 foot goal to Captials defenseman Ivan Majesky, and you'll understand what his career was like.

Seabass posted 24 wins for the club to go along with 47 losses and a save percentage of .881 in his final year.

In one of the great miscarriages of justice, Caron won a Stanley Cup ring with the Anaheim Ducks in 2007, serving as a spare goaltender.

That crashing sound you're hearing right now is Vladislav Tretiak destroying every piece of furniture in his living room. 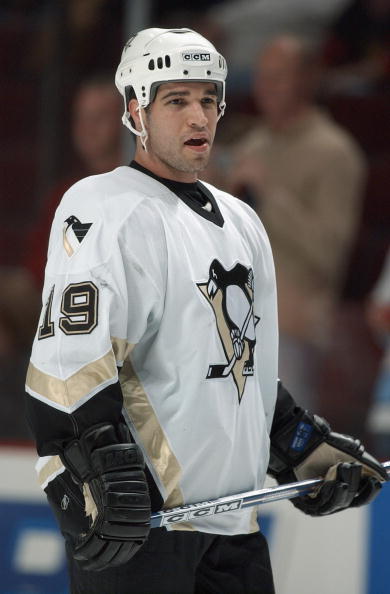 Acquired during the Penguins fire sale in 2002, Abid was the player the flightless birds got in return for solid center Jan Hrdina...needless to say, Abid never came close to achieving anything.

Abid appeared in only 19 games for the Pens, scoring a grand total of five points before having surgery on his ACL and only scoring one more goal ever in the NHL before shipping off to Switzerland (the nation of exile for failed Pittsburgh Penguins).

I wish there were more to say about Abid but, like his career, this entry is short and easily forgotten. 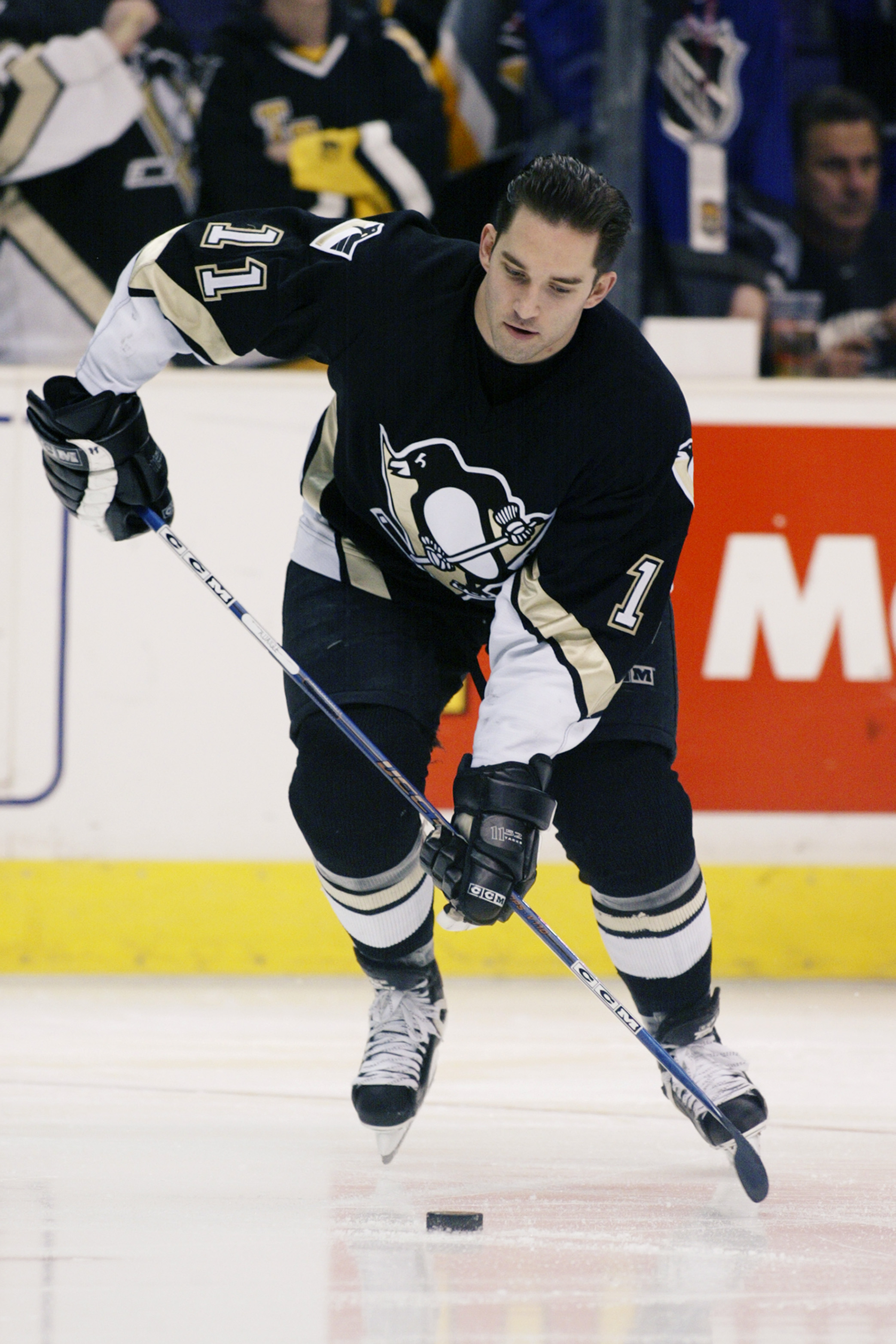 Drafted first overall by the Senators in 1993, Daigle became a poster child for someone who got all the hype in the world and lived up to none of it.  He was so hyped that rumors were flying before the draft that the Quebec Nordiques had offered Owen Nolan, Peter Forsberg, and Ron Hextall for the rights to the next big thing.

After being drafted, Daigle was quoted to have said "I'm glad I got picked first because no one remembers number two."

Rumors of all-night partying and drug use immediately started, and Daigle bounced around the league before being completely out of hockey at age 25.  While trying to become a celebrity, he played on a "celebrity" hockey team with Cuba Gooding Jr. and admitted he never actually wanted to play in the NHL but stuck with it because of his talent level.

Did all of this stop the Penguins from signing him after a two-year layoff?  Of course not.  In 33 games with the franchise, the next big thing scored seven points and was gone after one season.

While his lone season with the Pens did not set a new standard for suck, it did show what happens to someone when their heart is no longer in the sport they once claimed to love. 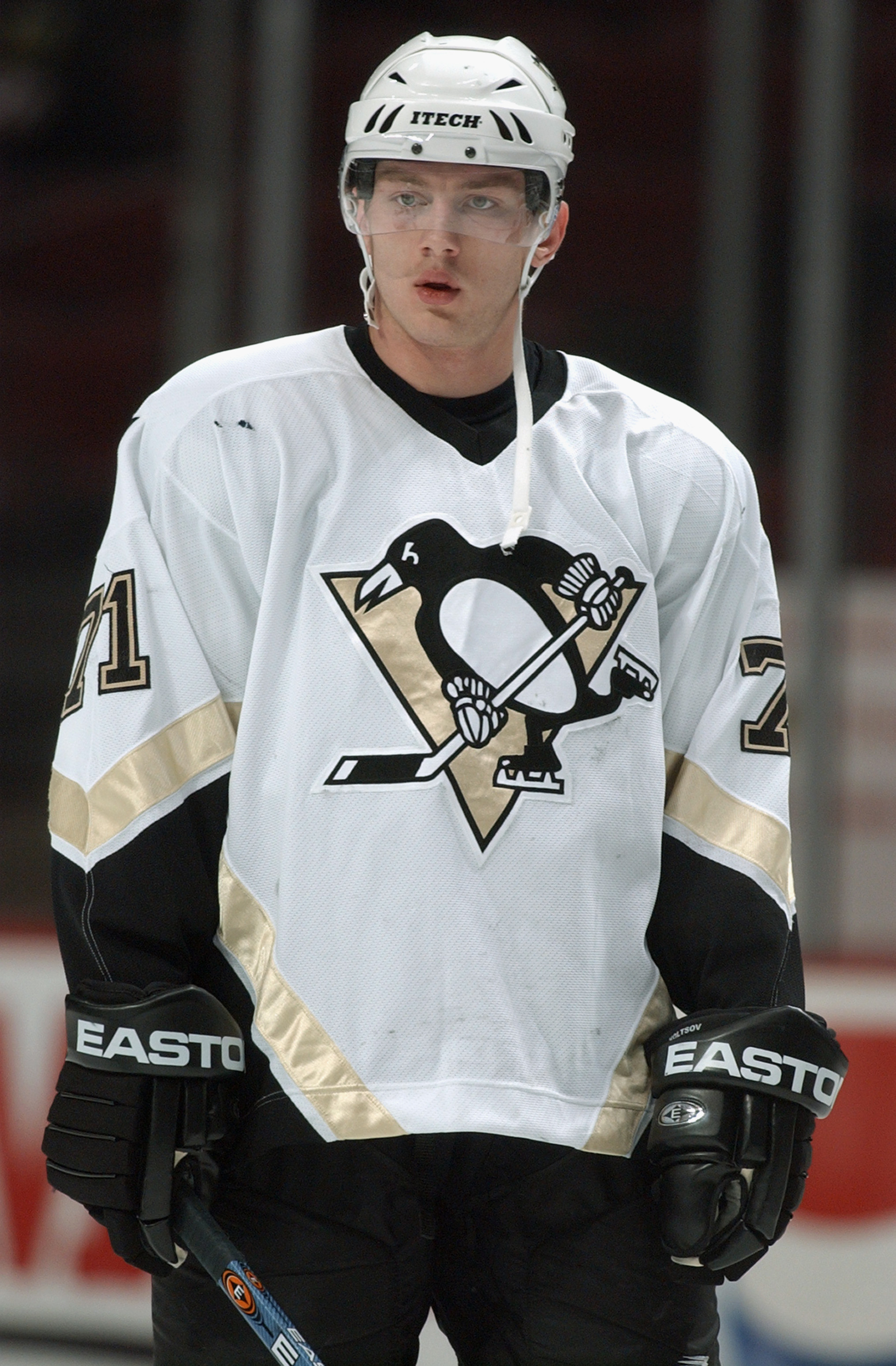 Drafted 18th overall in 1999, Koltsov was nicknamed the "Russian Rocket II" because everyone thought his play was similar to Pavel Bure...everyone was wrong.

Oh, he certainly looked like Bure when he was playing in the AHL, but the NHL level only yielded bad times.

Playing on a top line with Mario Lemieux, Koltsov scored only nine goals in 82 games in 2002 and holds the team record for "pucks fanned on in front of an empty net".  Known in thefan base as "Kolt-soft" because of his hesitance to go into the corners for loose pucks, good old Konstantin managed to contribute nine more points to the Penguins in following seasons until he fled to Russia to escape the boos. 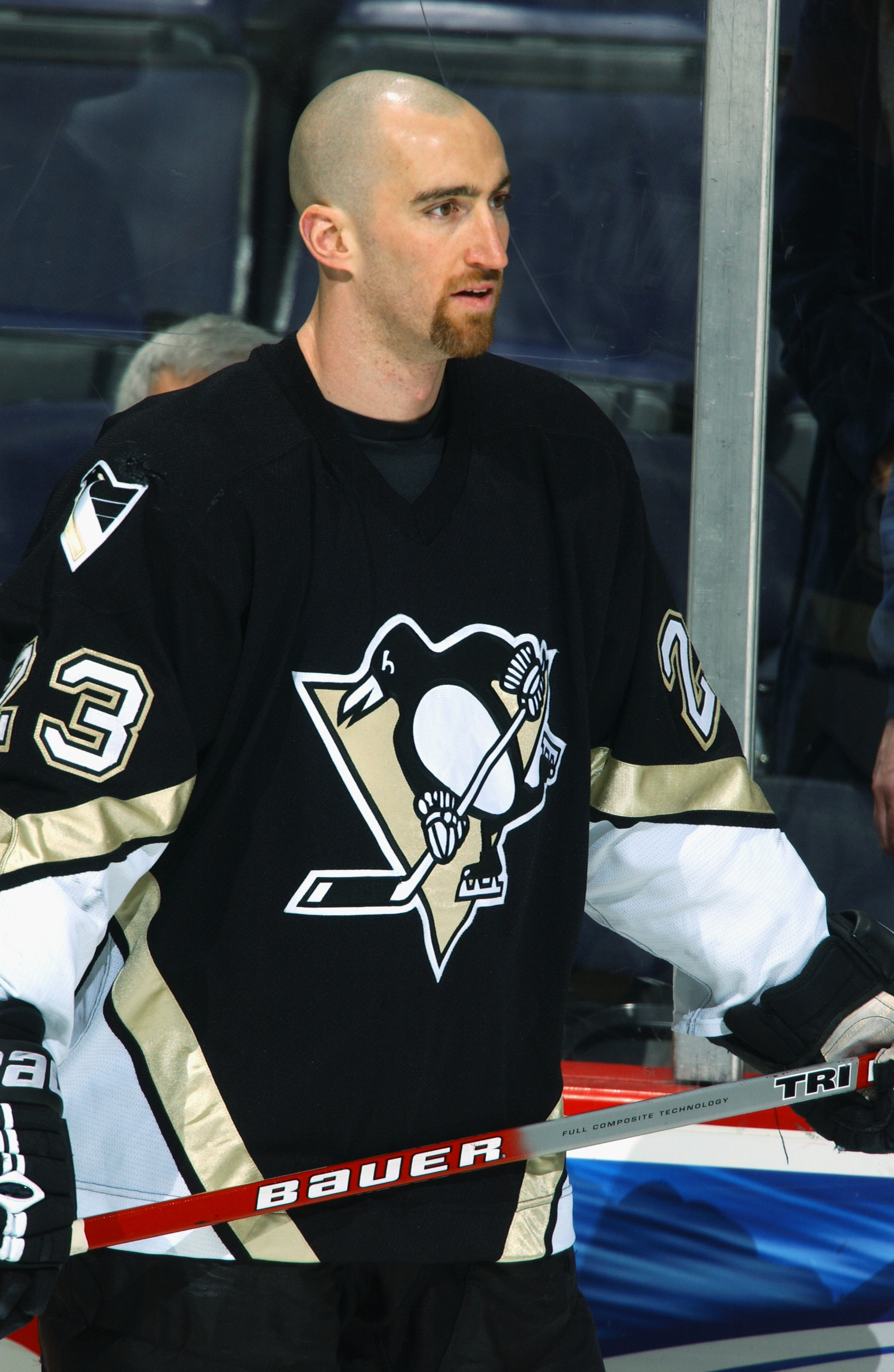 The second tallest player to ever play in the NHL, McKenna stood an imposing 6'8", and the Penguins thought he would take up a lot of space in front of the net and maybe score 20 goals.

They were half right because McKenna certainly took up a lot of space, but he had hands like frying pans and seemed to exist only to punch other players in the face.  Even playing on a line with the greatest player of all-time, Mario Lemieux, resulted in only nine goals during the 02-03 season.  For God's sake, Robbie Brown scored 49 goals with Mario, and the only talent he had was shopping for new hair plugs.

McKenna was also an alternate captain (because hell, why not?) and managed to log a grand total of 10 points during the 03-04 season.

But hey...he was really tall. 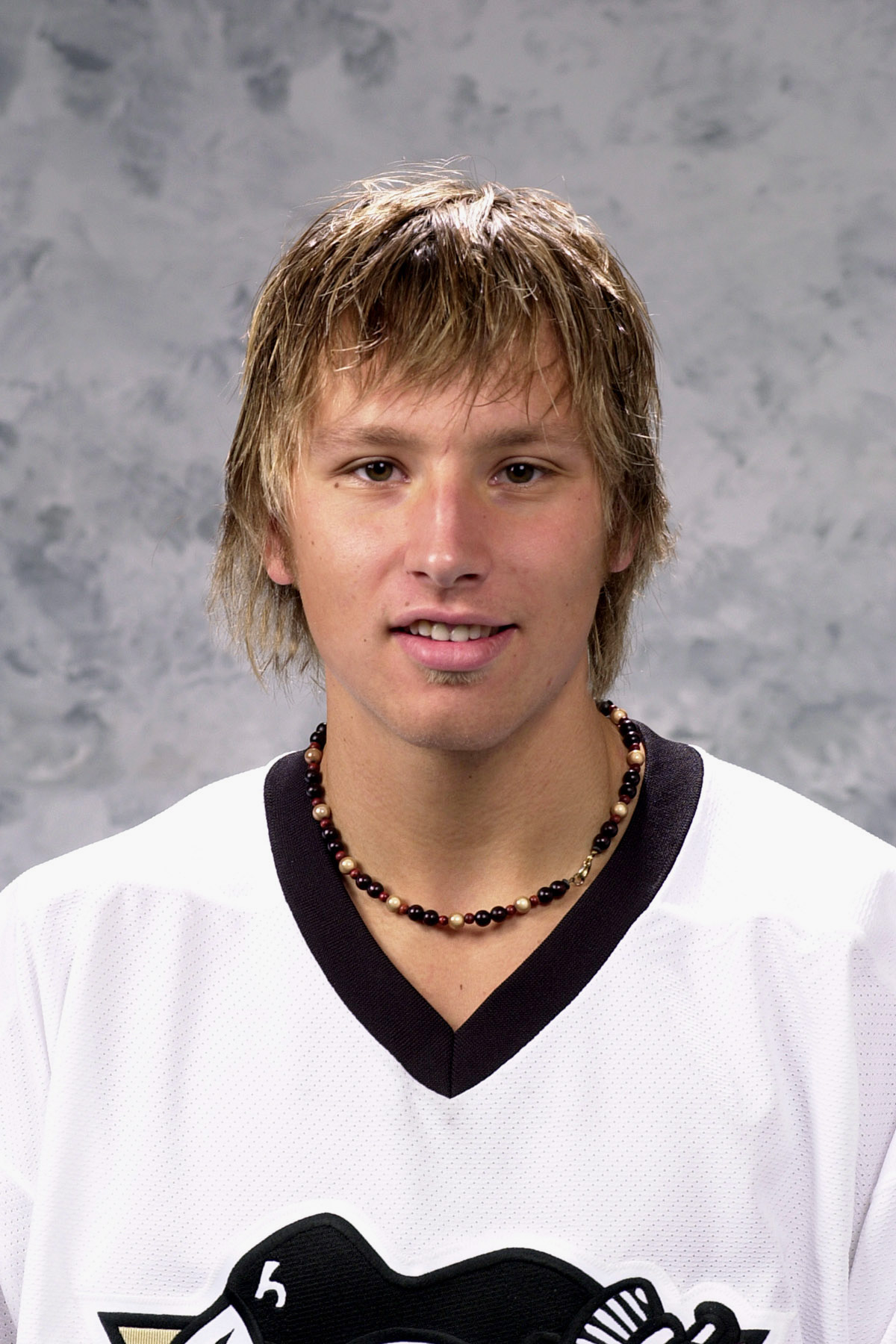 Endicott was picked 52nd overall in 2000, and the Penguins believed he had a very bright future ahead of him.  The future was indeed very bright for Shane; the only problem was that brightness was the other team's goal siren going off constantly while he was on the ice.

Scoring a grand total of two points in 41 games with the club, Endicott set a team record for most fans turning to each other and saying "Who the hell is Shane Endicott?"

Personal story:  While in college, three friends and I drove seven hours roundtrip in a blizzard to see the Penguins play the Minnesota Wild.  Seconds after the opening faceoff, Endicott turned the puck over to Marian Gaborik, who immediately scored to make it 1-0 about 30 seconds into the game.  In other words, it took longer to clean the snow off my car after the game than it did for Shane Endicott to ruin my night. 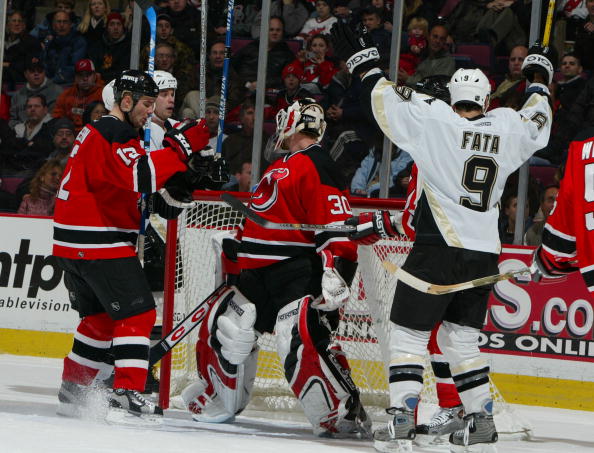 This was a VERY rare sightAl Bello/Getty Images

The 2003-2004 Pittsburgh Penguins season was one of the lowest points in the history of the franchise.  They had a record 18 game losing streak (0-17-1) and came into the final weeks of the season with an 11-42-5-4 record, which is an NHL mark for awfulness.  Also, a freaking defenseman led the team in scoring.

During this time, one of the fastest players on the ice was also one of the worst defensively.  Rico Fata topped out at 16 goals with the Penguins, a respectable number; however, that is not the stat for which he is remembered.  Fata, in his 73 games during the 03-04 season, managed to post a rating of minus-46.  That's so bad that even Rico's mom said "honey, you really need to play better that."

OK, I made that last part up. 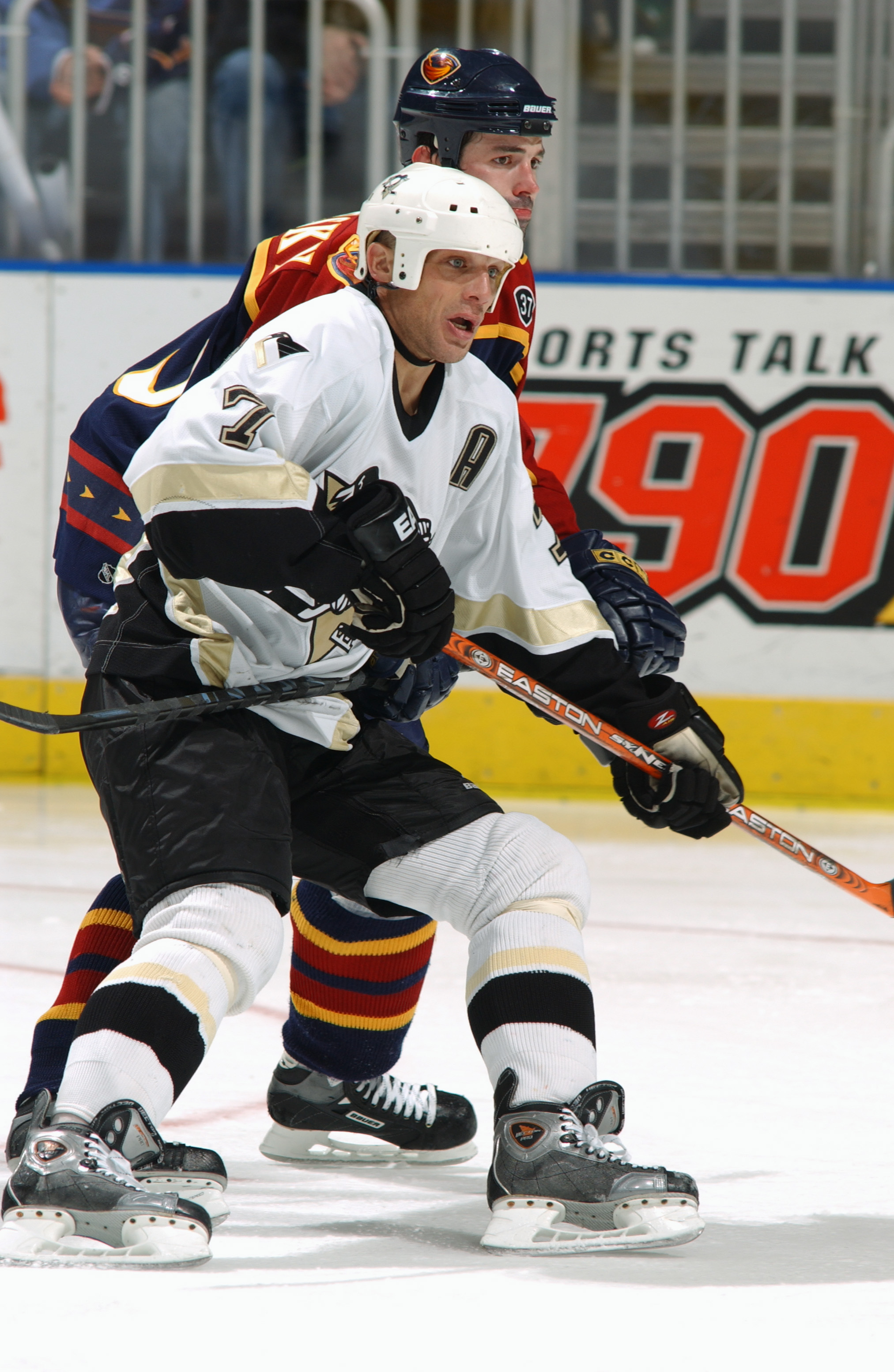 Trust me, this resulted in nothingScott Cunningham/Getty Images

A Stanley Cup champion with the Edmonton Oilers, Buchberger was brought in at the tail of his career to establish veteran leadership in the locker room.  I cannot speak for what he did behind the scenes, but I know the performance on the ice was God awful.

Kelly Buchberger did not record a point until March 9 during his only season with the Pens.  Go back and read that last sentence again, I beg you.  There were GOALTENDERS that scored more points than Buchberger.  Don't even think of blaming that stat on his games played either because he was in 71 that year (shaking head), some of them alongside Mr. Lemieux.

Look, I'm all for having roleplayers on a team and understand not everyone is a natural goal scorer or is even expected to score goals....but zero points for six months?  Come on. 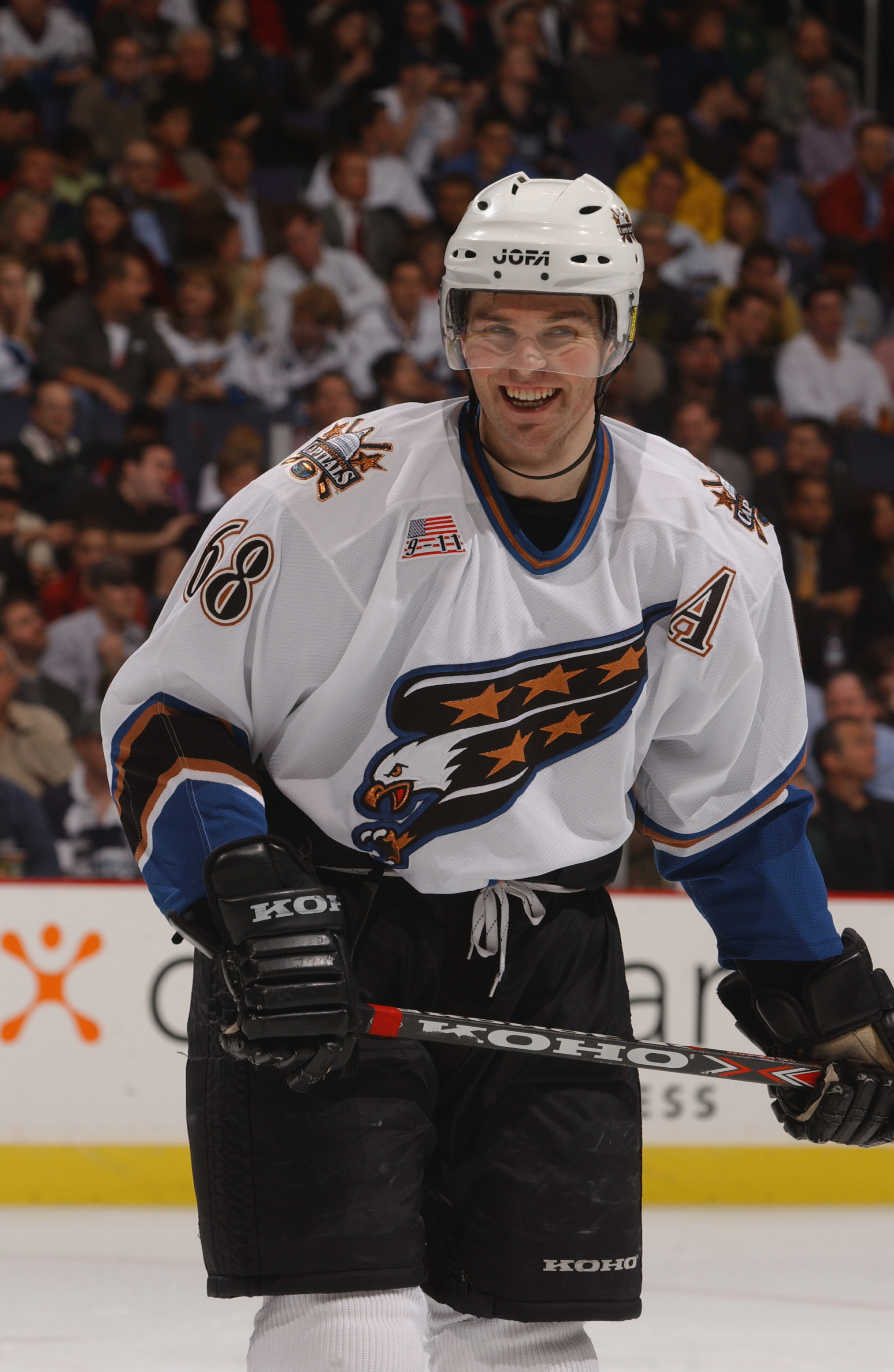 Laugh it up, ChucklesMitchell Layton/Getty Images

So, why are these three one entry?  My friend, because these were the three  "top prospects" acquired when the Penguins traded superstar Jaromir Jagr to the Washington Capitals.  Now do you understand why it was so hard being a Penguins fan during this time period?

Kris Beech was heralded as the "next Ron Francis" but was such an underachiever that I wouldn't even call him the "next" anything.  The future hall of shamer scored 10 goals in 01-02 and lasted in the minor leagues until 2005 when the Pens shipped him off for a conditional draft pick....Ron Francis, my ass.

Michal Sivek contributed a grand total of six points to the Penguins in 38 games and never even sniffed the pros again.

As a matter of fact, if you add up all the points these three scored in their entire NHL careers, you get 73 points.  Jaromir Jagr scored 79 points in his first year with the Captials.....sigh.  I think it's pretty obvious why these three are easily number one.