If Michigan State is the Wolverines' "little brother" than Notre Dame is Michigan's identical twin brother.

Ever since 1887, when Michigan stopped in South Bend on the way to Chicago to teach the game to Notre Dame students, the Fighting Irish have worked diligently to mirror itself in the Michigan image.

They've had great success in doing so. Notre Dame students and fans should thank Michigan every day of the year for how much success they've had.

OK that was a jab, but still. Both programs are regarded as the finest in college football history.

The Fighting Irish even used the same contractor that built Michigan Stadium and fashioned it after the Big House.

Yet the two schools hate each other. Passionately.

After Michigan had won the first eight games, Notre Dame finally put up a win in 1909. Fielding Yost was so mad about it, he boycotted playing Notre Dame ever again.

He claimed Notre Dame broke the rules by playing freshmen and players who had already used up their eligibility. The Notre Dame coach claimed Yost was biased against Catholics. The teams didn't play each other again for 33 years.

The 1943 matchup featured the No. 1 and No. 2 teams in the country, with the former being Notre Dame. The Fighting Irish won handily 35-12 in Ann Arbor and went on to win the national championship.

It was Michigan's only loss of the season and spoiled Fritz Crisler's run for his first national championship. Crisler refused to play Notre Dame again, and the series did not resume again until 1978, 35 years later.

Bo Schembechler hated playing Notre Dame. He didn't see the reason for it. To him playing that game meant that his team's chances of winning a title were hurt early in the season and took away from preparing for the grueling Big 10 schedule.

This is best exemplified by his "To hell with Notre Dame" quote. To add to that, he believed that we didn't need Notre Dame and that they need Michigan more than Michigan needs them.

God bless you, Bo, but the Michigan/Notre Dame series has been one of the best in college football since it resumed in '78. Even Lloyd Carr thinks so.

Michigan leads the all-time series 20-14-1 but since '78 Notre Dame holds a 12-10-1 advantage. This decade it's dead even at 3-3, with Michigan winning the last two and handing Notre Dame three of its worst losses in history.

Twice, Michigan has put a 38-0 beat down on the Fighting Irish in Ann Arbor and 2006's 47-21 was the largest point output by an opposing team in Notre Dame Stadium. It was also the first time Michigan had won in South Bend since 1994.

The 2002 game was controversial in which Notre Dame won 25-23 but Carlyle Holiday fumbled the ball on a 3-yard run to the goal line before he crossed and Michigan recovered but officials had already ruled it a touchdown.

Instant replay would be instituted in the Big 10 two years later and nationally in college football in 2006.

This year's meeting is the 36th all time and the over the last 16 meetings, the game was decided by a touchdown or less in 10 of them.

Ty Willingham and Charlie Weis each won their first-ever meeting against Michigan and with Weis's comments earlier this offseason it'll be interesting to see how Rich Rodriguez does in his first encounter with the rivalry.

ESPN: 'Michigan is a second-tier program'

ESPN: 'Michigan is a second-tier program' 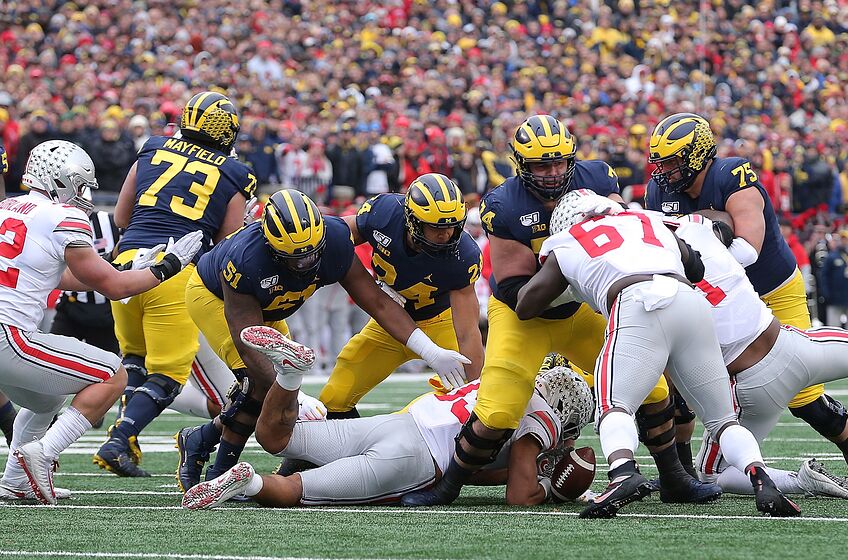