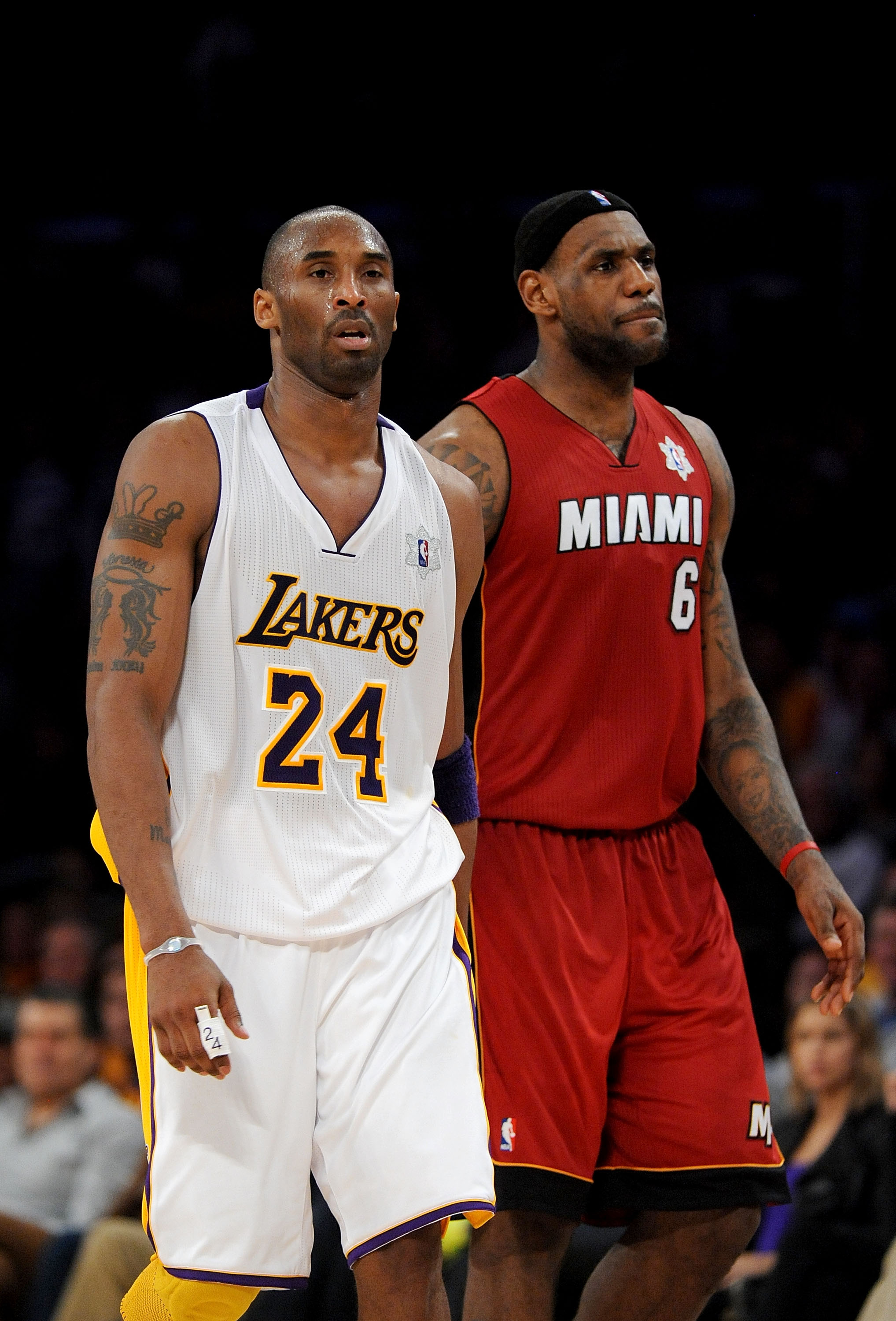 It was supposed to be the match-up of the season; Miami’s Big 3 of LeBron James, Dwayne Wade and Chris Bosh vs. L.A.’s Kobe Bryant, Pau Gasol and Lamar Odom in a Christmas Clash of basketball titans.  What it morphed into was nothing less than a good, old fashioned ambush and beat down by the younger, quicker, stronger Heat over the lackadaisical, uninspired two time defending NBA champion Lakers.

The final score, 96-80, didn't come close to telling the whole story. Miami came to Los Angeles and, before a sold out Staples Center filled with glitz and glamour and court side seats going on eBay for $20,000, took it to the Lakers in virtually every phase of the game.  James, Wade, Bosh and Company set out to prove they were the real deal and not just a conglomerate of mercenaries from South Beach.

Miami bested the Lakers in shooting percentage, rebounds, blocked shots and all around hustle and passion.  It’s only December and the second season (playoffs) is still four months away.  But as of today, it is crystal clear which Big 3 is the dominant force.  The Heat won this game with a smothering, tenacious defense and an unselfish persistence on offense that looked more like a Phil Jackson directed triangle than the perceived ball-hogging, ‘shoot first, pass later’ demeanor many critics expect of the Miami triumvirate.

Let’s take a closer look and see why the Heat trio was superior to Kobe and crew, and what the Lakers must do in order to right a listing ship that has left them limping towards the end of 2010 tied for the fourth best record in the West. 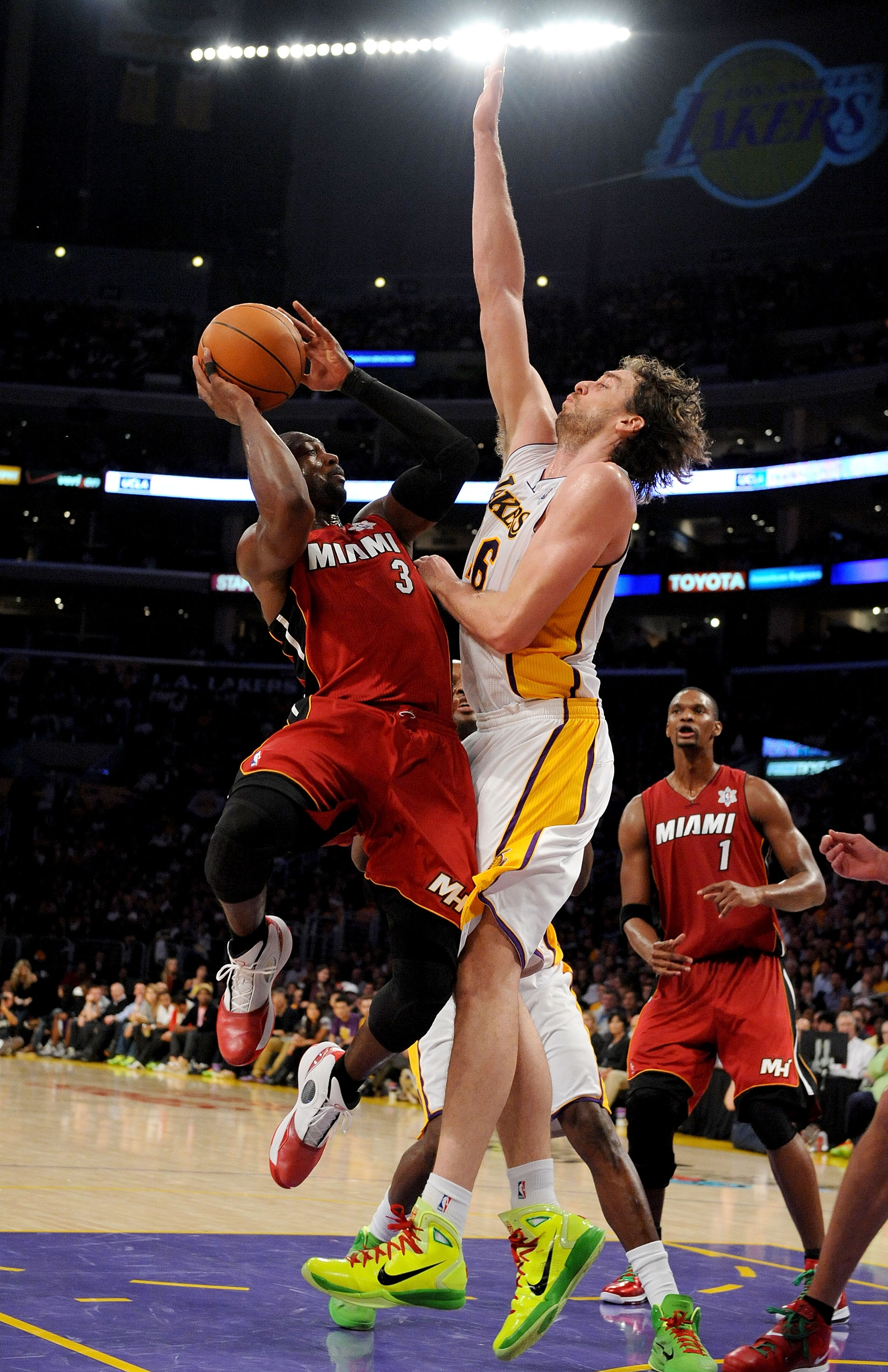 It would be an understatement to say that Pau Gasol and Kobe Bryant came up small.  Between them, they made one of 12 shots to start the game and neither had a single point in a 14 point first quarter that was the lowest of the season for L.A.   They both finished with 17 points on 14-33 shooting and were continually harassed into making bad decisions throughout the game, which led to air balls, steals, grimaces, glares and, in the case of Bryant, his third technical foul in two games.

Bryant always gets an A for Effort and this game was no exception.  But, Miami, which is ranked number one in the league in points allowed (90.8), played a swarming defense, never allowing Kobe to get on track and go off on a scoring binge.

After coming up empty in the first quarter, Bryant’s numbers were 8 in the second, 5 in the third and only 4 in the final period when the Heat took over the game.

A concept that is sorely lacking from the Lakers.

Gasol Misses Bynum, While Odom Has off Night 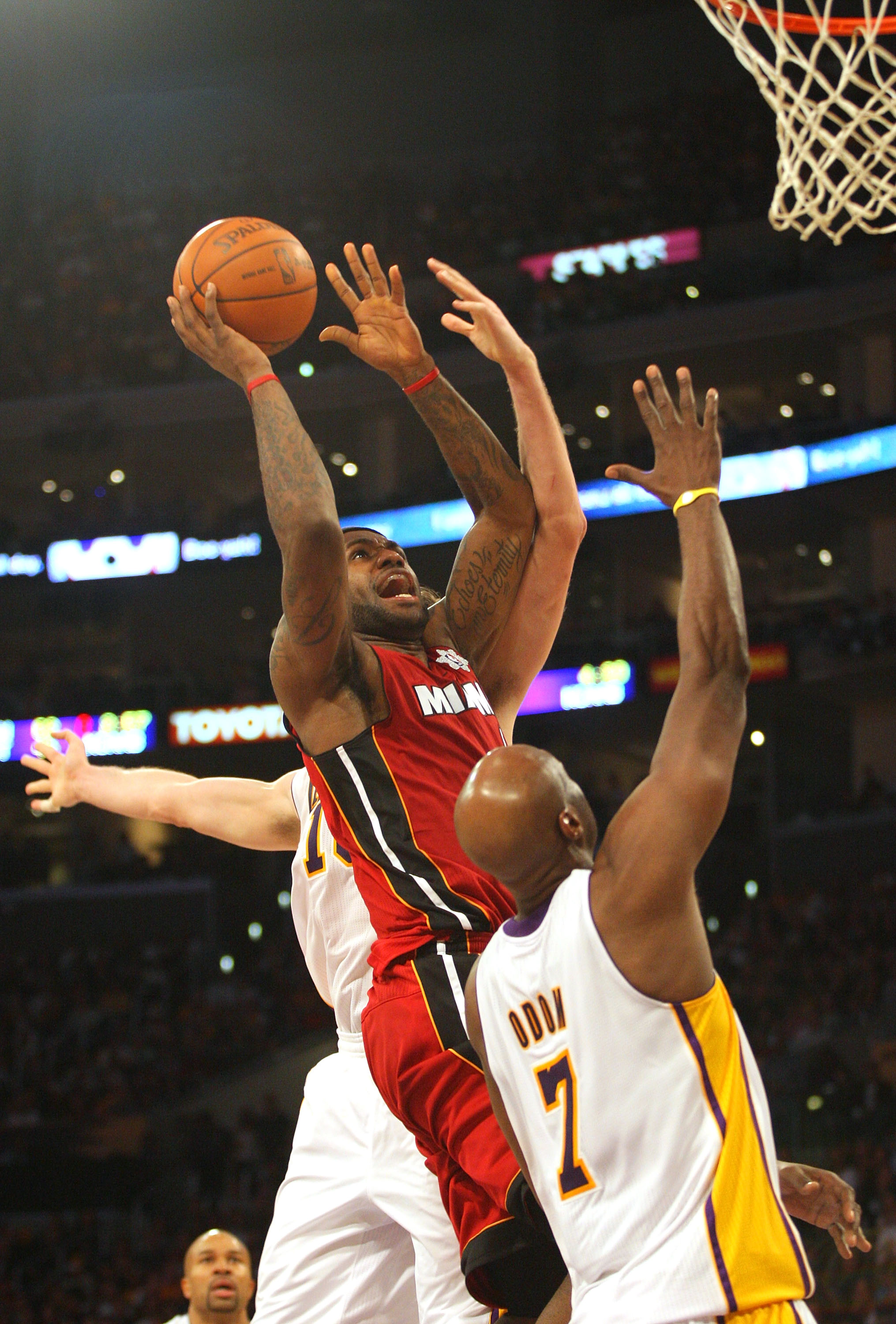 As has been the case in recent weeks, Gasol looked tired and flatfooted much of the game.  Without a healthy Andrew Bynum crashing the glass, Gasol was forced to play one on one against the veteran 7-3 hulk, Zydrunas Ilgauskas, who bothered him enough in the paint to hold him scoreless until midway through the second quarter when the Heat had established a lead they would never relinquish.

Between them, Gasol and Odom combined for just three offensive rebounds the entire game, meaning the Lakers rarely got a second look after a missed shot.  Gasol went to the charity stripe just once the entire game, another indicator of his rebounding ineffectiveness.

When healthy (and when was that?), Bynum creates all sorts of problems for the opposing team’s defense.  It was hoped he would be further along in his recovery from knee surgery but that wasn’t the case on Saturday.

Bynum played 17 minutes, had just one offensive rebound and scored six points.  Miami, which plays without a legitimate strong center, took advantage of Bynum's absence.  Wade and James consistently drove to the basket and went to the free throw line a dozen times, making all 12. 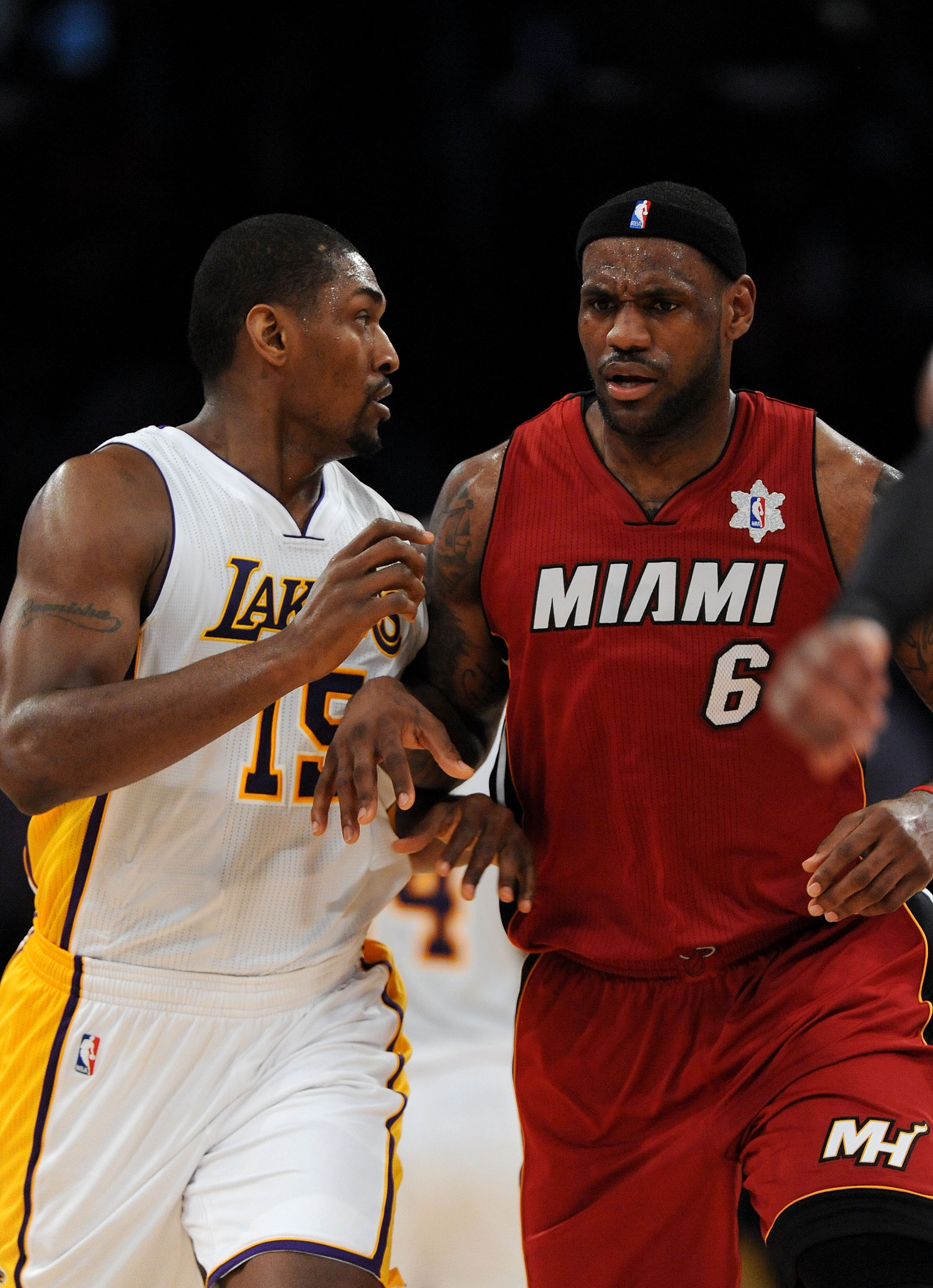 L.A. fans roundly booed the superstar when he was introduced and again when he customarily threw hand powder into the front row crowd.  After that, you could only admire him.  He was an artist focused on his craft–efficiently hitting on 8 of 14 shots, including 5 of 6 from three-point range.

It was another in a long line of triple doubles for King James—11 rebounds and 10 assists to go along with his 27 points.  Between direct scores and assists, James accounted for more than half of his team’s 98 points in what may have been his finest performance of the season.

Ron Artest of the Lakers was assigned to cover James–just 2 minutes 34 seconds into the game Artest picked up his second foul and went to the bench.  So much for that experiment.

Matt Barnes and Bryant didn’t have much luck either trying to guard the 6-8, 250 pound James.  LeBron played with a sense of purpose and clearly intended to make it a team effort, something he's not always been known for.  On this particular day, it was all about the team and not so much about LeBron.

Chris Bosh Comes Up Huge For The Heat 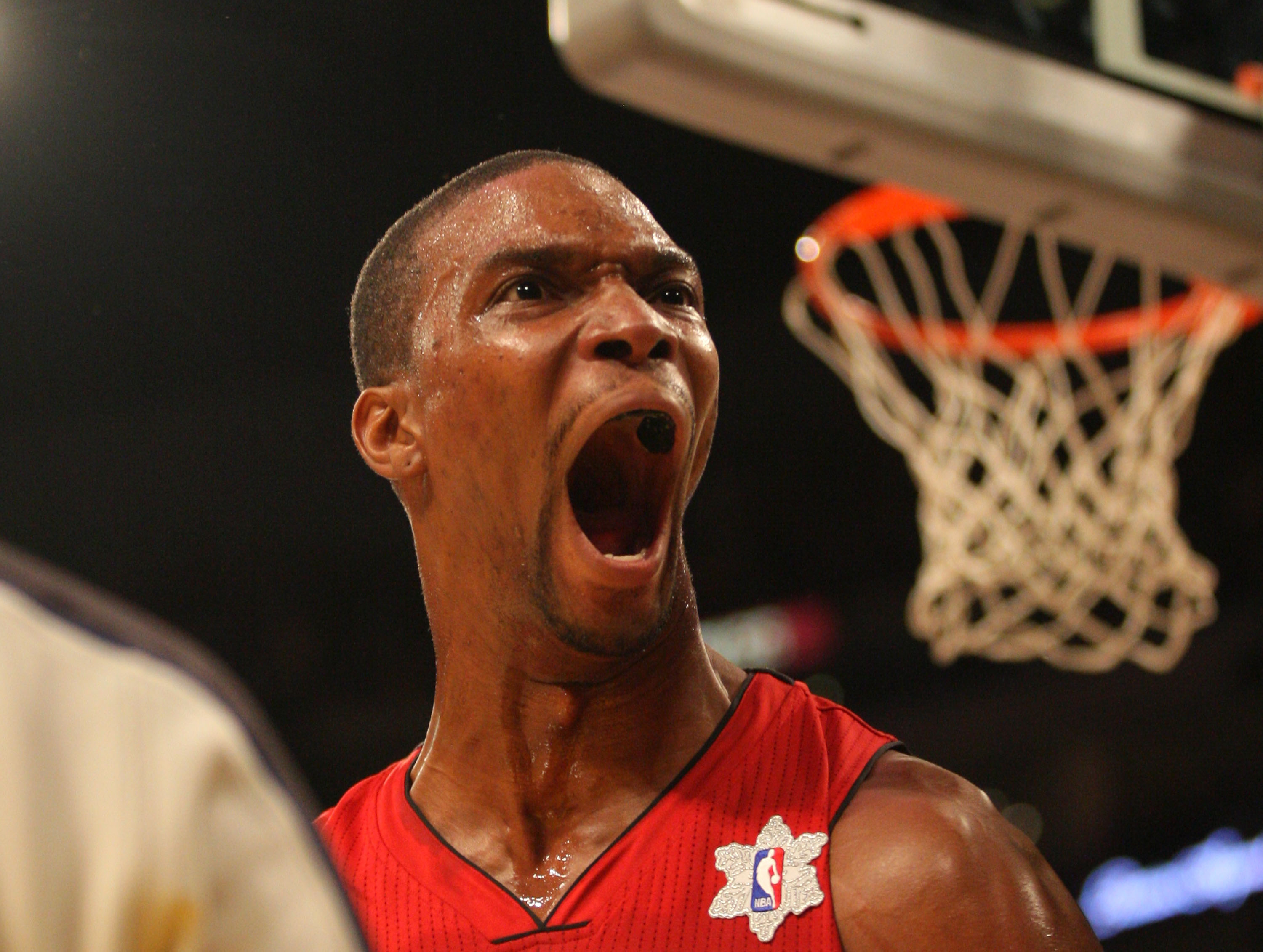 “We’ve showed that we could play together,” Bosh told the Miami Herald after the game.

Coming into Christmas Day, the lanky forward had been averaging about 18 points per game and is known for his ability to face the basket and knock down mid range jumpers with a quiet consistency.

Against the Lakers, Bosh unleashed his “inner paint” self, driving on numerous occasions directly to the hoop for easy dunks over and around Gasol and Odom.

Bosh finished with 24 points on 11-17 shooting and, more importantly, garnered 13 rebounds – 5 of those on the offensive glass to lead both teams in that department.  His all around performance helped trigger this victory.

Without Bynum in the middle to slow him down, Bosh had his way around the basket and was virtually unstoppable.

Christmas Has Not Been Very Good to the Lakers 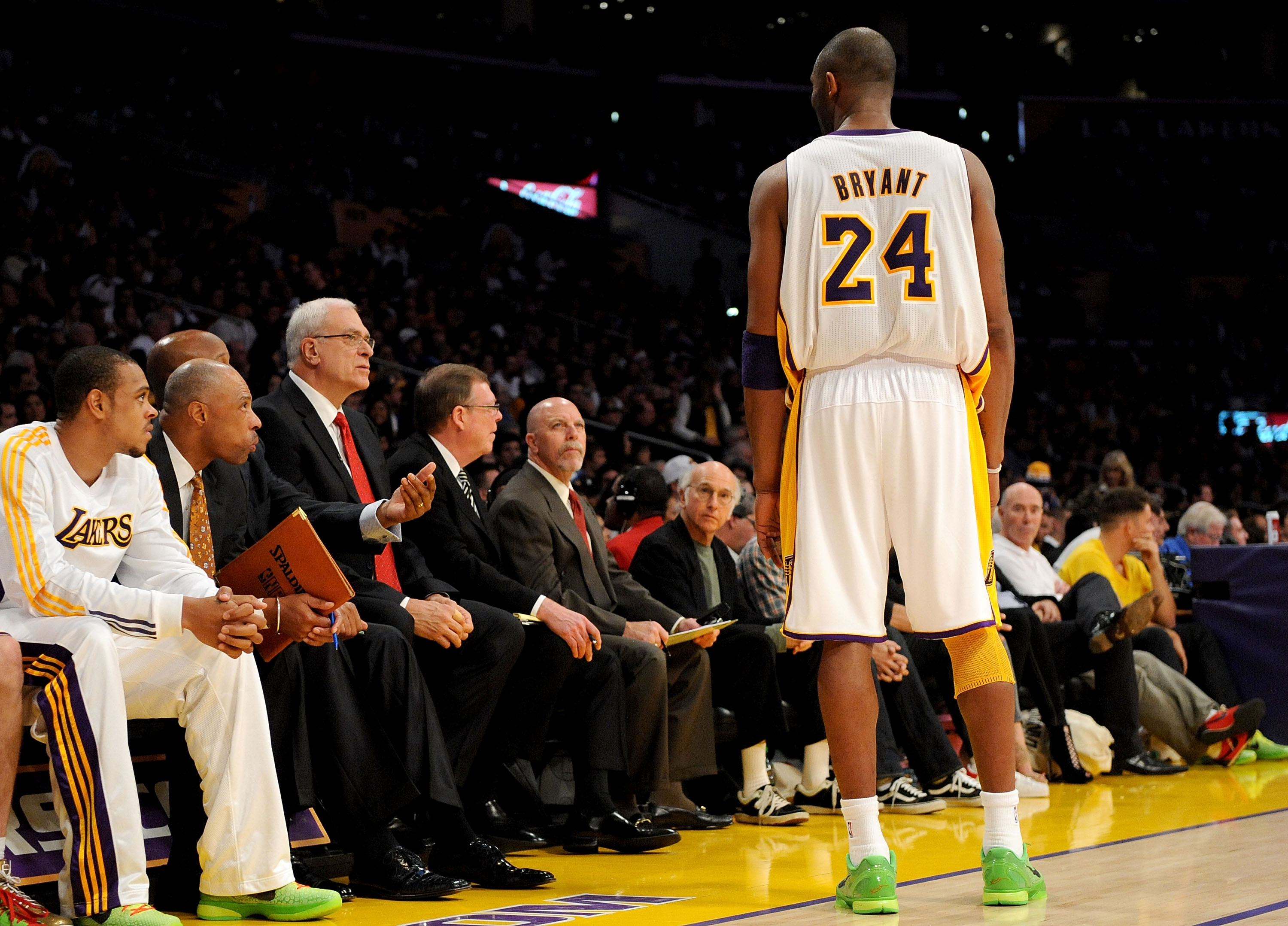 Phil Jackson and The Lakers abhor playing on Christmas.  This was their 12th consecutive appearance on Christmas Day and their record stands at 4-8.  This was the 11th time the team made such an appearance in a season following an NBA championship.  That record is now a paltry 5-6.

As good as Miami and its Big 3 were, the Lakers have enough talent to compete with them and win a championship again in 2011.  What they lack right now is the drive and sense of purpose to accomplish that.  They’ve been down this sort of road before during the regular season and have managed to find their way back.

Saturday’s game exposed one particular glaring weakness that a lot of fans have noticed.  Now, some of the players and coaches are echoing those sentiments.

“We’re cocky,” Odom told the L.A. Times following the game.  “We feel like we shouldn’t lose, can’t lose.  That’s been our problem, I think, this season.”

For one day at least, Miami and its Big 3 clearly stood out as kings of the court.  They still must go through Paul Pierce and the Boston Celtics to get to the title round.

But, if the Heat continues to play as it did against L.A., James, Wade and Bosh may very well end the season wearing the one crown that truly matters:  that of NBA Champions.