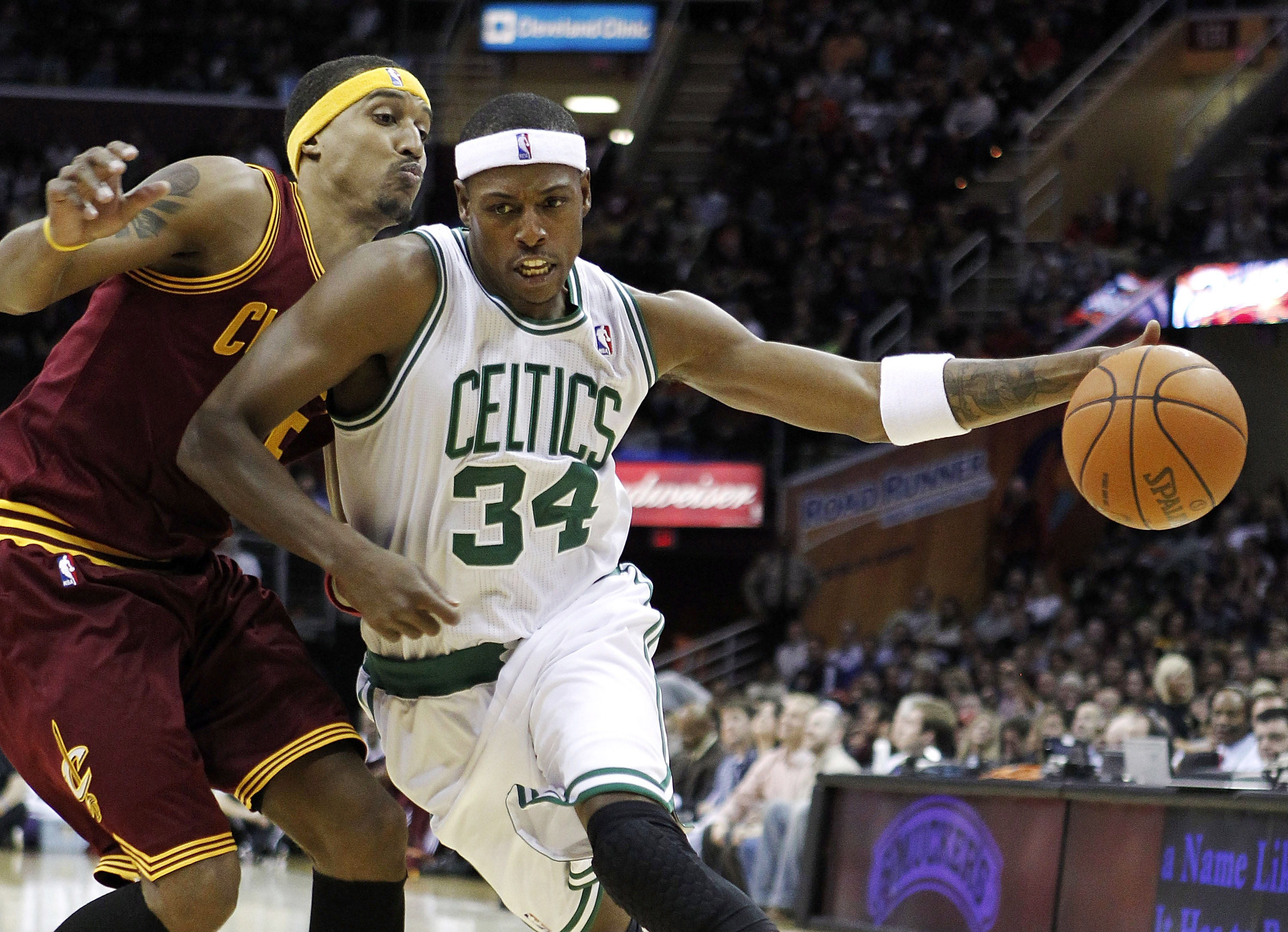 On November 3, 2010, Paul Pierce scored the 20,000th point in his NBA career. Not only has he scored 20,000 points, he's scored every single one of them with the Boston Celtics. After being drafted out of Kansas with the 10th overall pick in the 1998 NBA Draft, The Truth has spent over 12 seasons in Boston, wowing fans young and old in good times in bad. Even in the darkest of days, Paul Pierce was always there to be the lone bright spot in what became regular Celtic losses.

Yes, loyalty still has a place in modern sports.

Over the years, Paul Pierce has given us some pretty some great memories and huge wins. Let's take a look back at some of The Truth's finest moments.

5. 2001: Paul Pierce Scores 40 Against the Lakers and Earns His Nickname 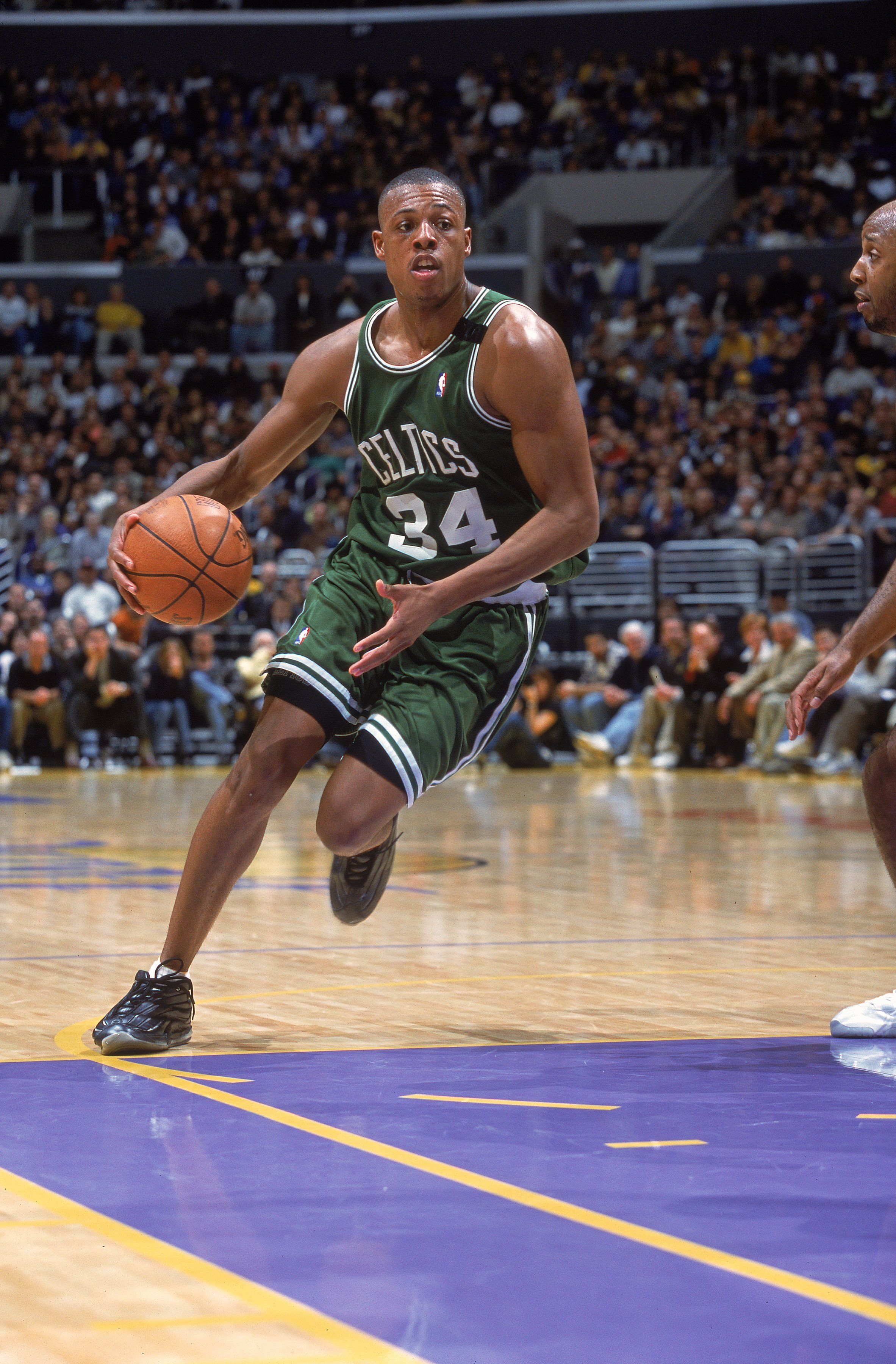 Paul Pierce entered the 2000-2001 NBA season under the worst of circumstances. In September 2000, a week before training camp began, Pierce and a few teammates went to a club in Boston for one last night of fun before another year of hard work. The night ended with Pierce suffering serious stab wounds. Reportedly, it was Pierce's leather jacket that stopped the assailant's knife from reaching his heart.

One might think a stabbing would stop a player from being ready for Opening Night, or cause the player to miss part of the season.

He started all 82 games that year. And it was during this season that Pierce would earn his now-famous nickname, "The Truth."

On March 13, 2001, the Celtics traveled to Los Angeles to take on Kobe Bryant, Shaquille O'Neal, and the defending champion Lakers. Although the Celtics would lose 112-107 that night, Pierce scored 42 points against a far-better LA squad.

And so it was that Paul Pierce made a name for himself, courtesy of the Big Aristotle (or whatever Shaq's nickname was at that time). 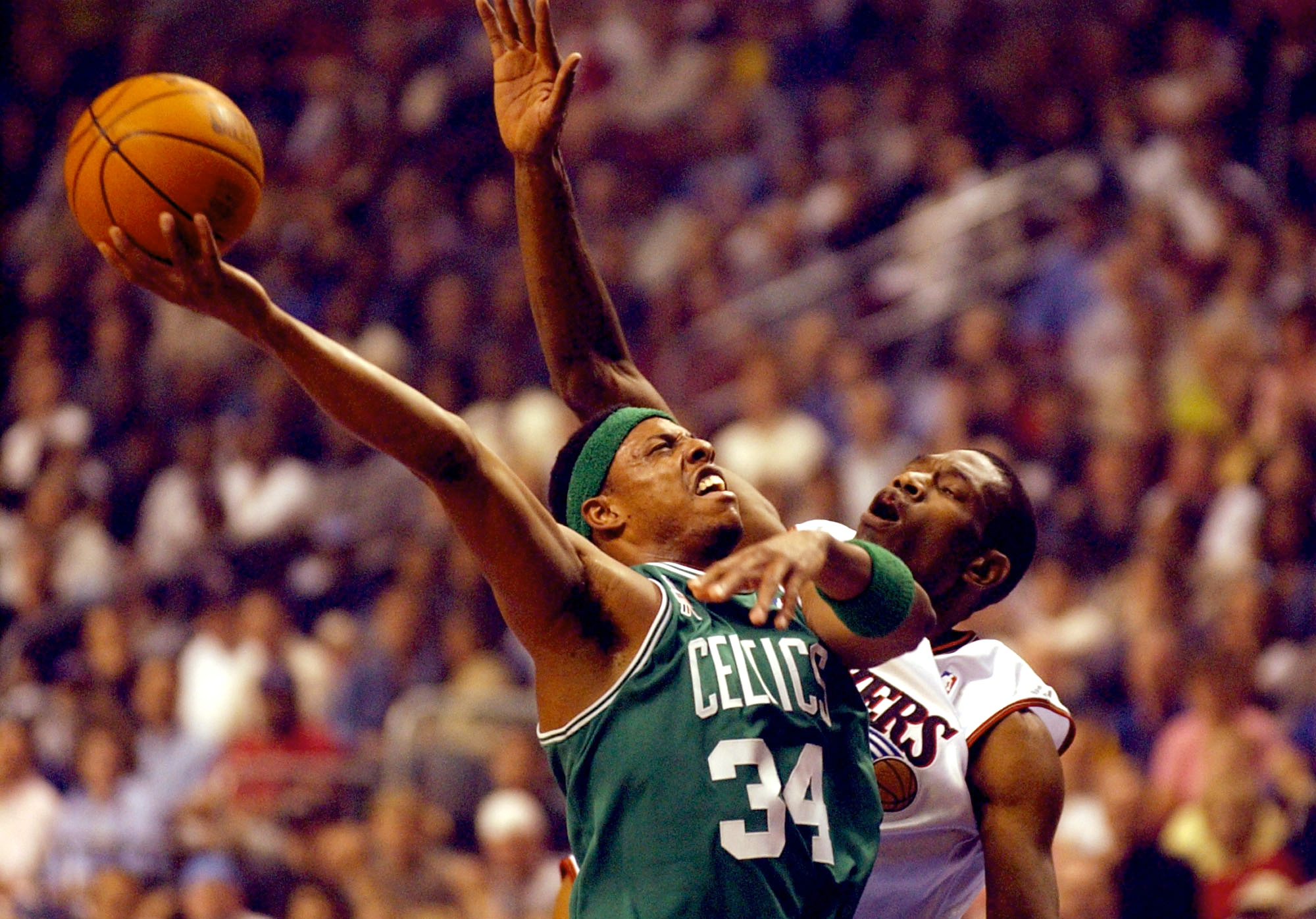 Although not really a single moment, it was a thrilling period in Celtic history, and it's the stuff that has made Paul Pierce a legend in Boston.

The Celtics entered the 2002 NBA Playoffs with a 49-33 record, with the third seed in the Eastern Conference. The season was one of the few winning seasons experienced by the Celtics during the woeful late-90's and early-2000's, as Boston had appeared to have lost its identity in the long winning drought brought on by the retirement of Larry Bird, Kevin McHale, Robert Parish, and others from the championship teams of the 80's.

After beating the Allen Iverson-led Philadelphia 76ers in five games to open the playoffs (giving rise to Iverson's notorious "Pratice?" rant), the C's took down the second-seed Detroit Pistons, also in five games. The Celtics would go on to face the New Jersey Nets in the Conference Finals (for those with severely short memories, the Nets were led by the great Jason Kidd and were the top seed in the East that year).

The Celtics would lose the series to New Jersey, who went on to lose to the Lakers, who won their third straight championship. However, it was what happened during the series that Boston fans will remember.

In Game Three of the series at the then-FleetCenter, the Celtics were trailing the Nets 74-53 at the start of the fourth quarter. With the Nets bench laughing at the lowly Celtics, something needed to be done.

This is where Paul Pierce leaves his mark on the parquet floor.

Pierce would score 19 of his 28 points in those riveting 12 minutes, and with a little help from Antoine Walker, the Celtics came back from a 21-point deficit to win the game 94-90 and take a 2-1 series lead. Although the Celtics would lose the series, Paul Pierce showed guts and determination and led the Celts to an improbable win. 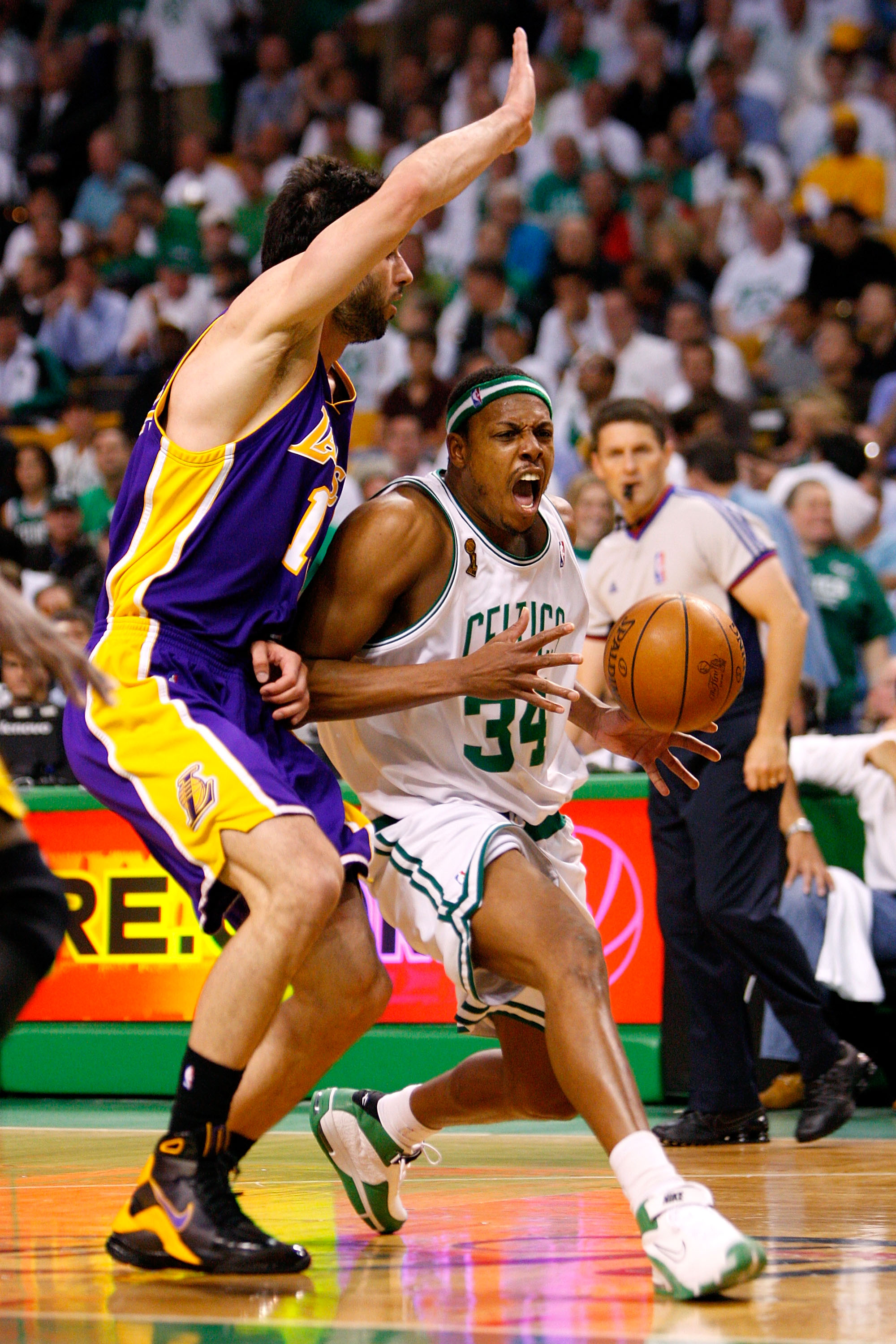 2008. What a magical year. The Celtics FINALLY ended their championship drought and took it all. And, of course, they did it against the hated Lakers. It's always epic when we can get a win over them, especially when they come into a series so cocky.

The Celtics, still led by Paul Pierce, who was almost traded the previous summer, would have none of that. Now with Kevin Garnett, Ray Allen, Rajon Rondo, and a deep, talented bench, the C's were ready to bring the O'Brien Trophy back to TD Garden.

In Game One of the Finals, Paul Pierce took a hard fall and appeared to badly injure his knee. The Garden fell silent as Pierce was carried off the court and wheeled away to the locker-room. It appeared that Boston would have to endure a hard Finals without their longtime leader.

But, as I said, it only appeared that way.

Within minutes, TV cameras cut to footage of Paul Pierce on his feet and walking down the tunnel to return to action. The Garden came alive as The Truth returned to set the Celtics free from the Purple and Gold Tyranny.

Pierce proceeded to hit three straight three-pointers, including one as he was going out of bounds, drawing the foul (which he made to complete the rare four-point play).

The intensity that Pierce showed in this game, as well as the rest of the Finals, let us know that even after ten years, he could still lead a team to glory. 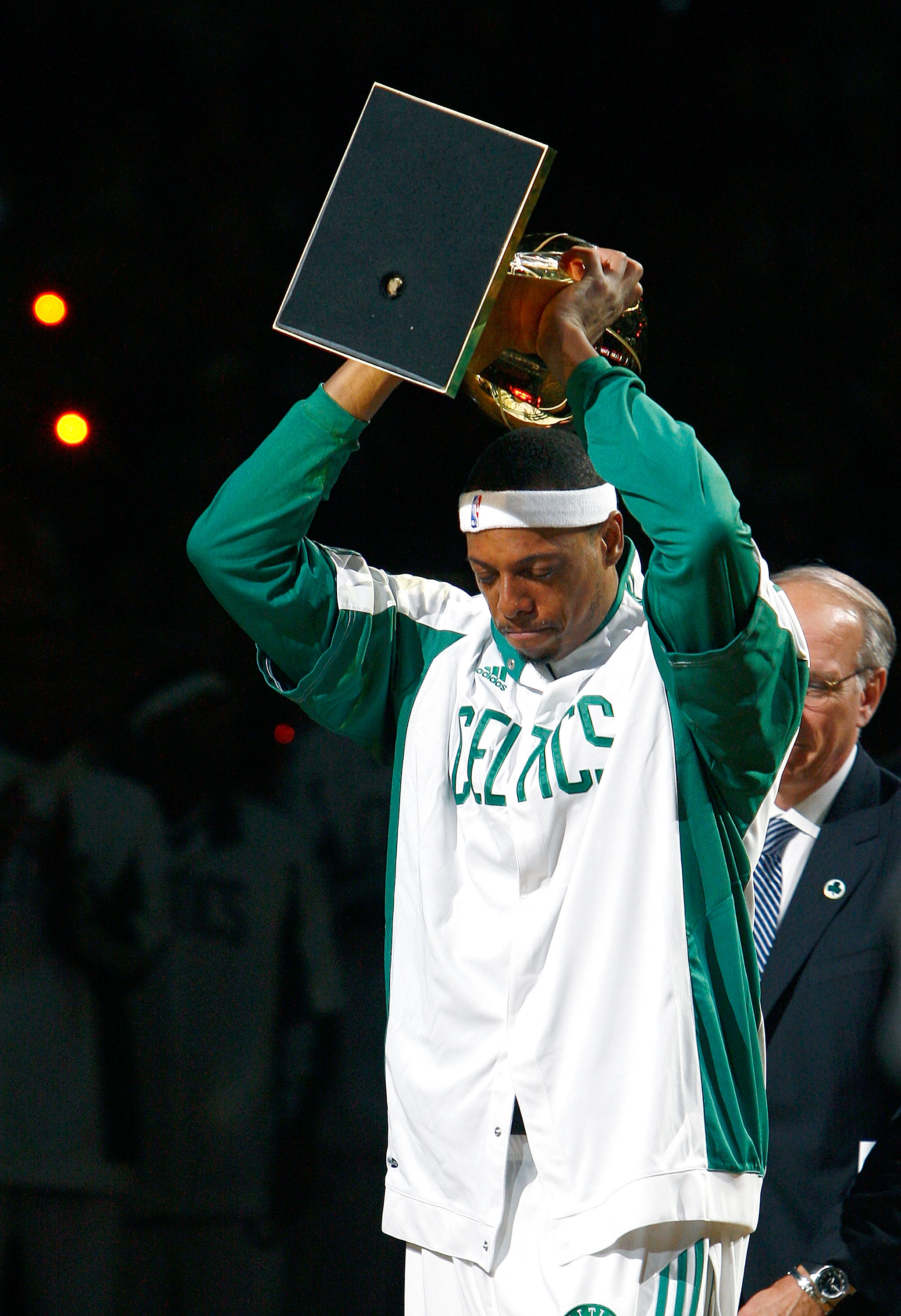 October 28, 2008. A night to remember for any Celtics fan. Especially those in attendance at TD Garden that night, including yours truly. That night, Boston fans everywhere watched the 17th Championship Banner rise to the rafters amid tears and cheers. The happiest tears shed that night were by none other than Paul Pierce.

At mid-court that evening, Pierce officially accepted his 2008 Finals MVP trophy. In a heartfelt speech, Pierce thanked teammates, family, and the legions of fans who had supported him throughout his years in Boston, especially during the hard times.

It was a great moment to experience, as team and fan-base alike redeemed themselves and returned triumphantly to the top of the NBA. It was especially gratifying for Paul Pierce, as he could finally see the permanent enshrinement of his NBA championship, something he worked so long and so hard for.

Thank goodness I was there to see it all. 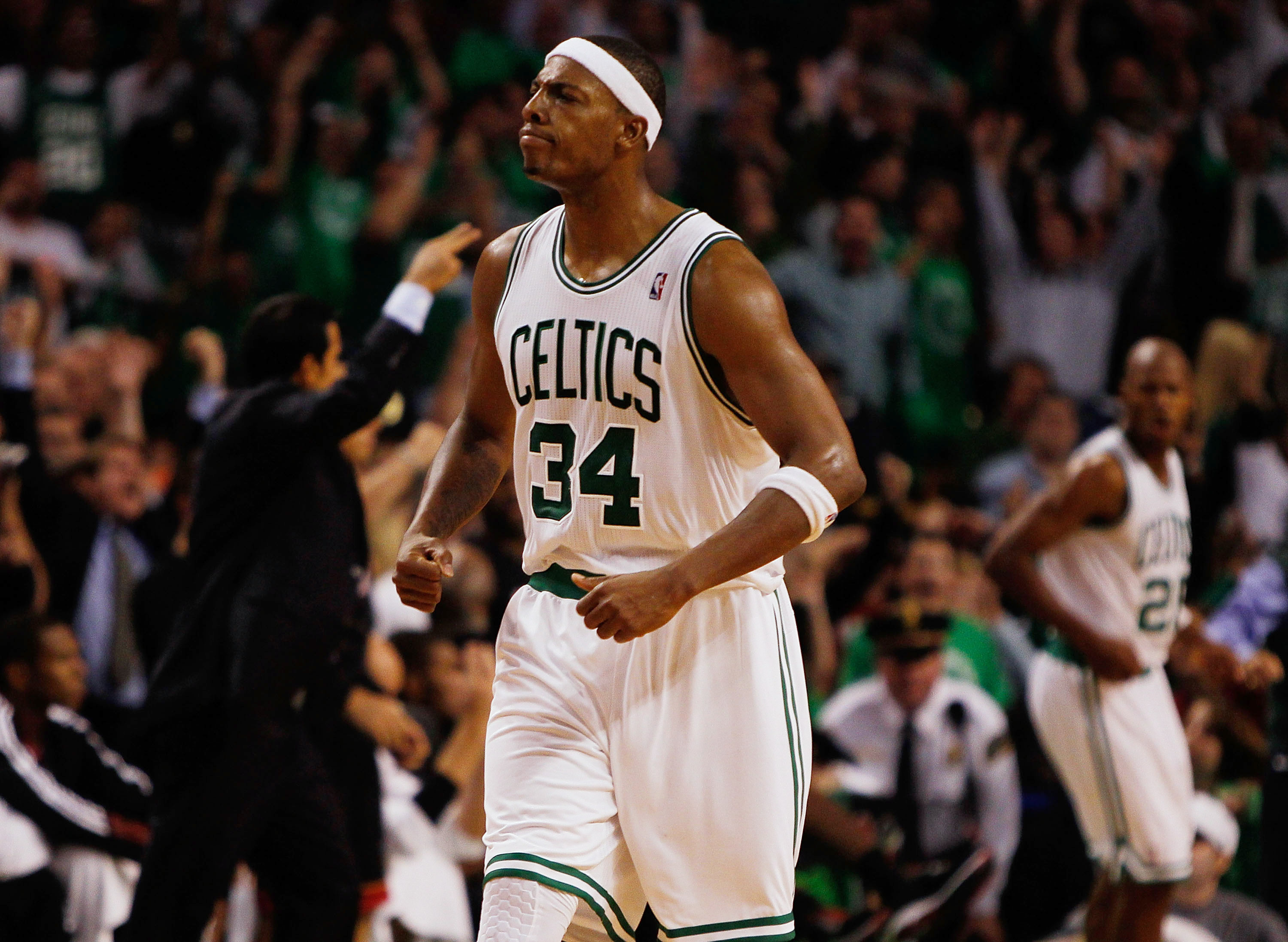 Yes, this one is obvious. But it absolutely has to be the biggest and best of Paul Pierce's illustrious accomplishments. With 28 points, Paul Pierce scored his 20,000th NBA point. Although not in fanciful or epic fashion (he sunk a free throw), Pierce reached a benchmark only achieved by 35 other players, and only two other Celtics (Jon Havlicek and Larry Bird).

Although he has some time left, this seemed to be the icing on the cake for Pierce's career. It appears that his number will hang in the rafters of the Garden someday. He may very well have a spot to himself in Springfield at the Hall of Fame.

As I said at the top of the article, I think the fact that all of them were scored in Celtic Green should count for something. After 12-plus seasons of ups and downs, Paul Pierce has been there for us, a team, a city, and a fan-base.

I have no problem with people changing teams to win, especially when your owner is dangerously incompetent (no names mentioned), but I have a traditional streak in me, thanks to my parents. They're from an era where a team picked you and you stuck with them, through thick and thin. Paul Pierce's career represents that old-time sports value of perseverance.

It's a little more personal for me, as he was the second Celtics player I learned about (after Larry Bird). For years I've been dazzled by his versatile play and his unending passion. It's his jersey that hangs in my closet, and it's that jersey I wear on game nights. It sounds corny, but it's because of Paul Pierce in large part that I watch the Celtics. Congrats, Mr. Pierce, and here's to many more successful years and another championship