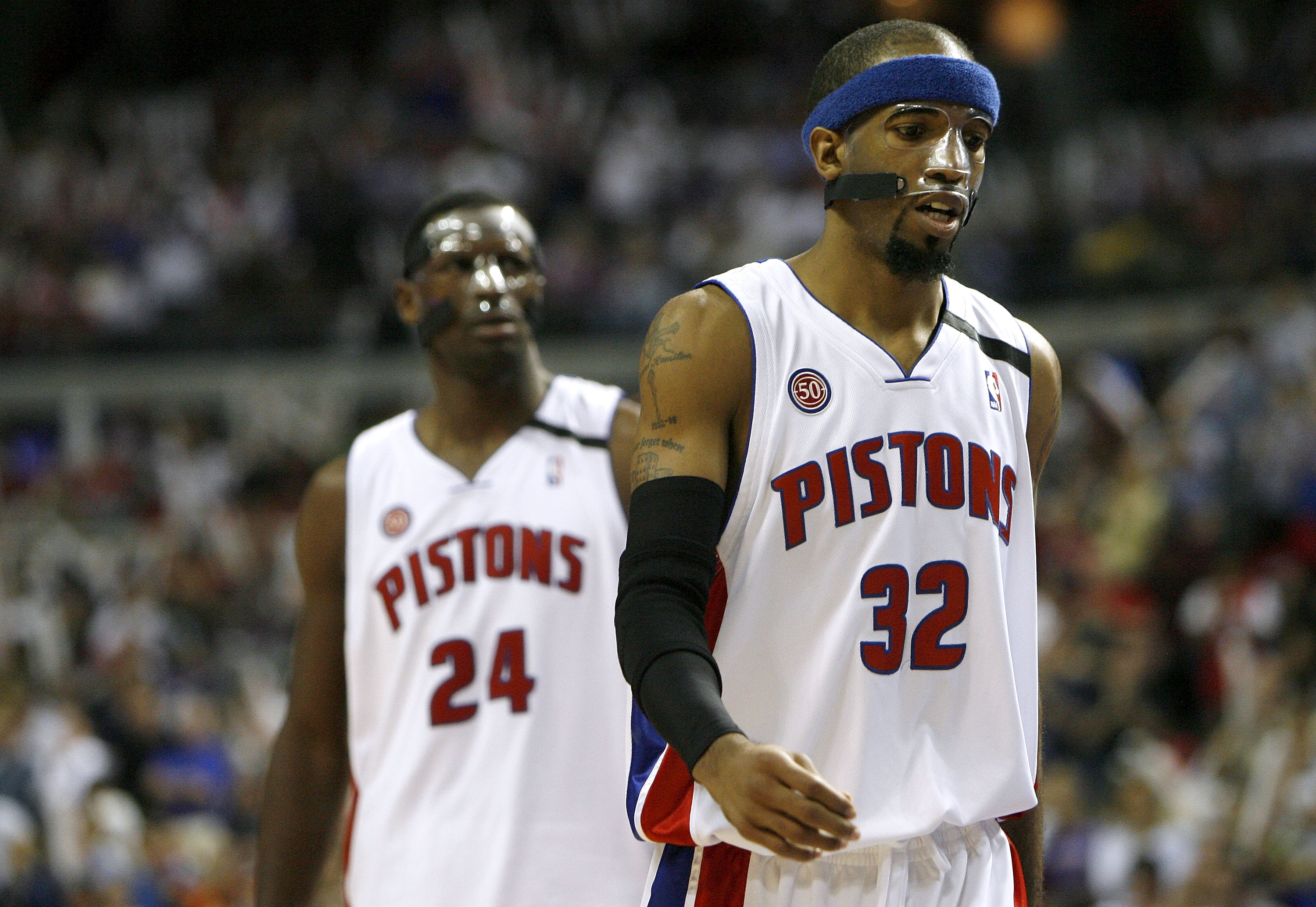 Throughout the history of the NBA, we have seen a variety of player accessories.

However, these professionals should be credited for not being distracted by having to wear goggles or masks on their face.

Accessories such as headbands provide some style on the court.  Other times, players definitely need a lesson in fashion.

Whether it is by tattoos or hairstyles, NBA players have the best chance to express their individuality compared to other sports.

In the NHL and NFL, players are basically covered from head to toe and are restricted from appearing unique.

Here are the top 25 player accessories in NBA history. 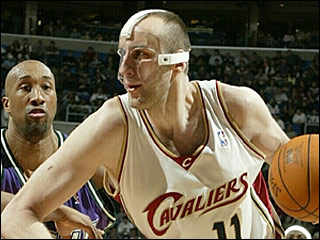 In March of the 2004 NBA season, Zydrunas Ilgauskas was forced to wear a mask after breaking his nose.

He looks like a very scary Russian from a James Bond video game.  Hopefully, the center gave advice to teammates who would later have to wear a mask. 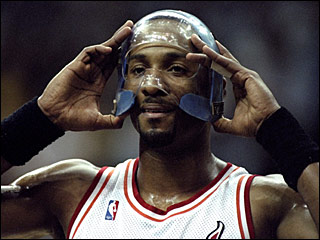 In 1998, Miami Heat big man Alonzo Mourning needed some protection for his face.

All of the battles that he had with the New York Knicks may have led to the need for a mask.

It is amazing how much better masks look 10 years later.  He could not be happy to wear it. 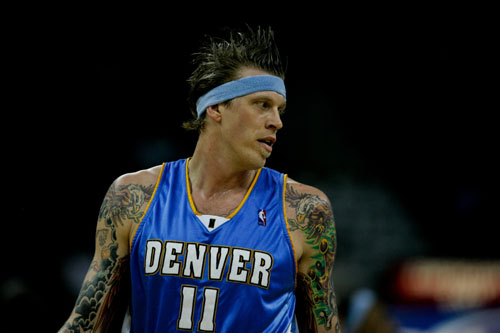 The Denver Nuggets' big man is easily recognizable on the basketball court.

Whether it is his hair or colorful tattoos, players know who it is when Chris Andersen is blocking them.

By the way, does anyone think "The Birdman" celebrates a little too much on mediocre blocks? 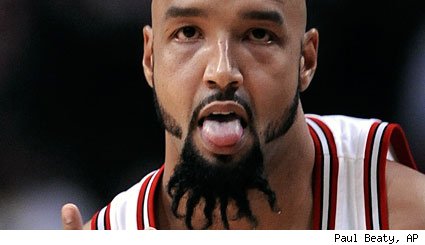 Drew Gooden will be remembered for his beards more than his actual performance in NBA.

Gooden may have started the trend of very large goatees among sports figures.

Previously his facial hair was a bit more clean, but the one featured is here is ridiculous.

Richie White writes that it is a "Eurotrash/reggae/octopus mash-up." 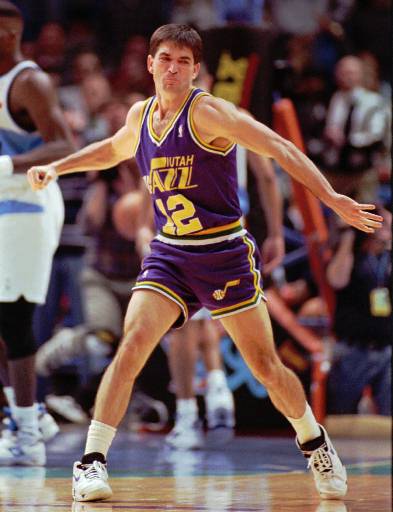 The Hall-of-Fame point guard was very talented in dishing out the ball to Karl Malone.  However, John Stockton needed a lesson or two in acceptable basketball fashion.

Stockton was about 10 years late with the height of his shorts.  However, it is really hard to hate on him since he may be the greatest point guard in NBA history.

Is he doing a fist pump, a weird stretch, or a crazy dance in this picture? 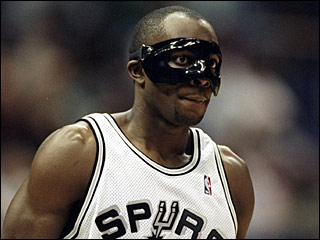 Brandon Williams only played 18 games in the NBA, but in that time he picked out a Batman-like mask to wear in 1998.

I wonder why Alonzo Mourning did not choose the black mask. 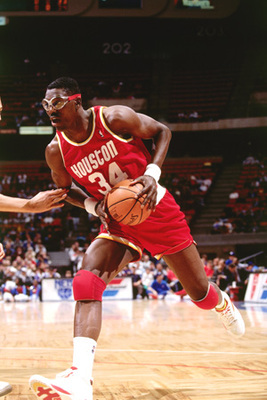 For a short time period in 1991, the great Hakeem Olajuwon wore goggles.

The kneepads in this picture are also worth mentioning.

The eyewear most likely did not affect his signature move, the "Dream Shake." 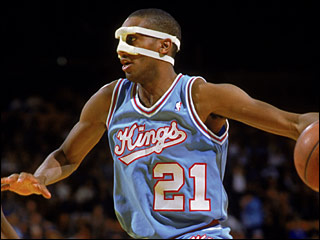 It looks like former Sacramento King player Harold Pressley forgot to remove the rest of his mummy costume.

The Kings jersey is pretty awesome though.

Pressley was a first-round pick in the 1986, but he did not have a very long career in the NBA.

However, he was a member of the 1985 Villanova championship team and also was the first player in Big East history to record a triple double. 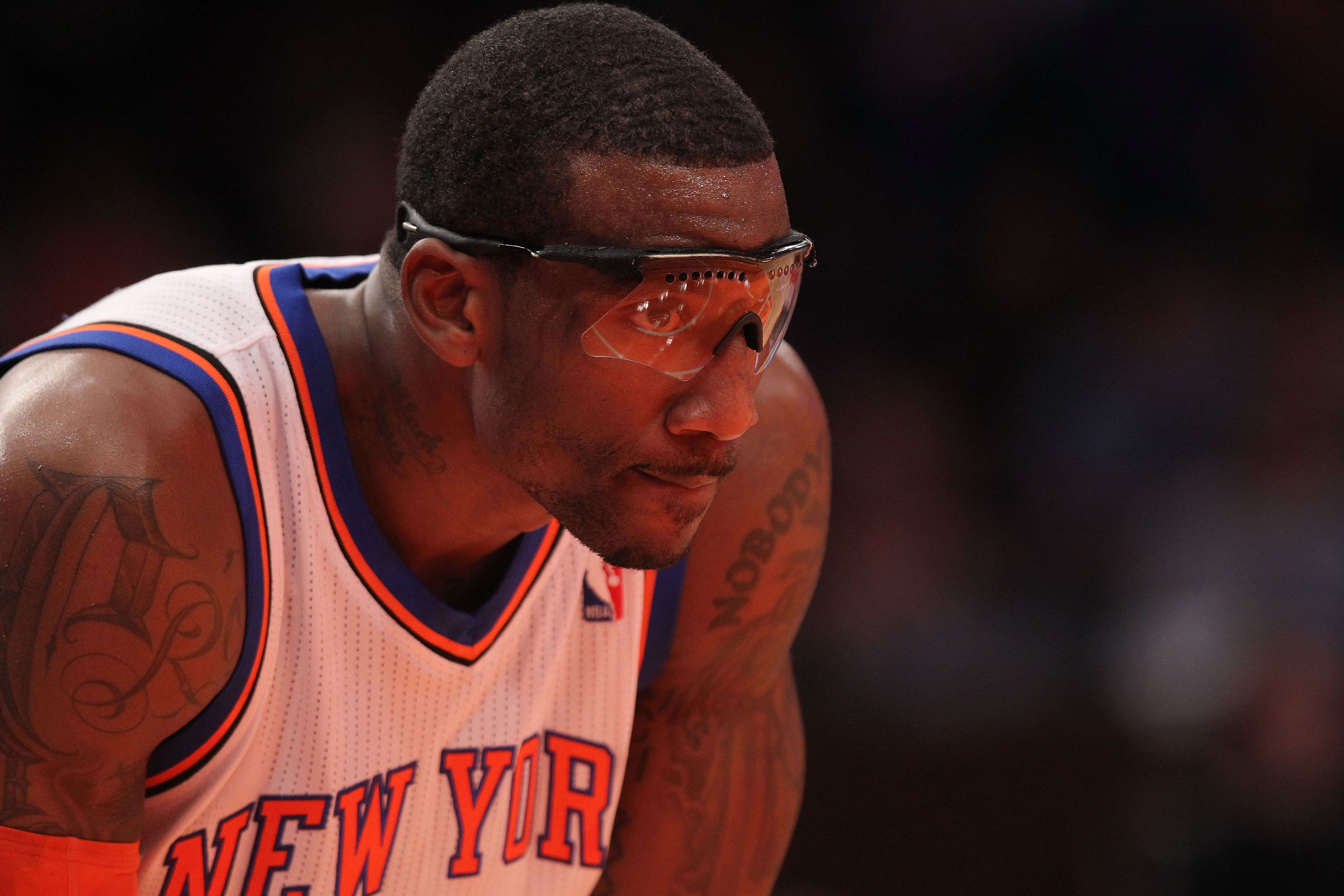 Amare Stoudemire's glasses/goggles with the New York Knicks look much better than his old purple ones with the Phoenix Suns.

After getting eye surgery, he sports protective eyewear made by Oakley. 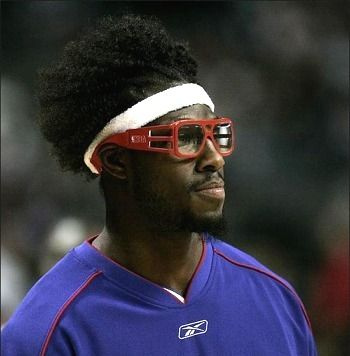 The Detroit Pistons defensive specialist wore these goggles for part of a game in 2005.

He does not really compare with some of the other players who wore goggles consistently, but he gets some points for style.

Ben Wallace is better known for sporting a different accessory. 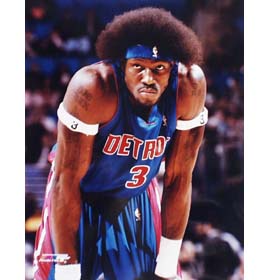 The former NBA defensive-player was an absolute beast for a few years.

Ben Wallace showed off his strength by being the first player to wear headbands, not wristbands, around his arms.

His Afro is also worth mentioning.

Has anybody else pulled off this look? 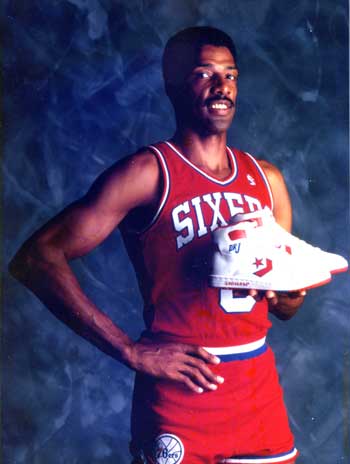 In an attempt to win the basketball shoe market, Converse created the "All Star" shoe in 1908.

The shoes were later named Chuck Taylors after the basketball player made it his preferred shoe.  He actually became the shoe's leading salesman.

Players such as Dr. J, Magic Johnson, and Larry Bird all sported Converse shoes.  For the majority of NBA history, it was the most popular shoe and it can still be purchased today. 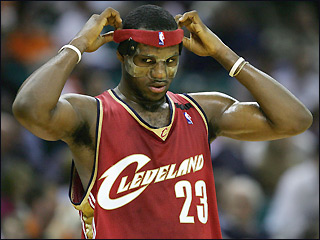 In January of 2005, LeBron James was forced to wear a protective face mask.

In his first game wearing the mask, he went 11-of-19 from the field and scored 26 points.

James pulls off the look pretty well, much better than his teammate "Big Z."

The only reason he ranks so high on this list is because of popularity. 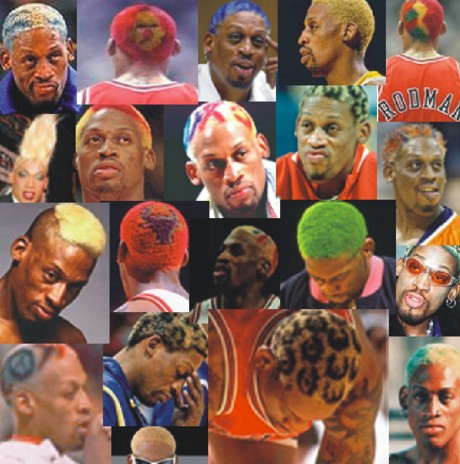 Dennis Rodman was one of the greatest players at rebounding the basketball in the NBA.

He won titles with both the Detroit Pistons and Chicago Bulls.

He quickly became maybe the craziest athlete to ever play in the NBA.

Really, what was he thinking sometimes?  What would a conversation between him and John Stockton be like? 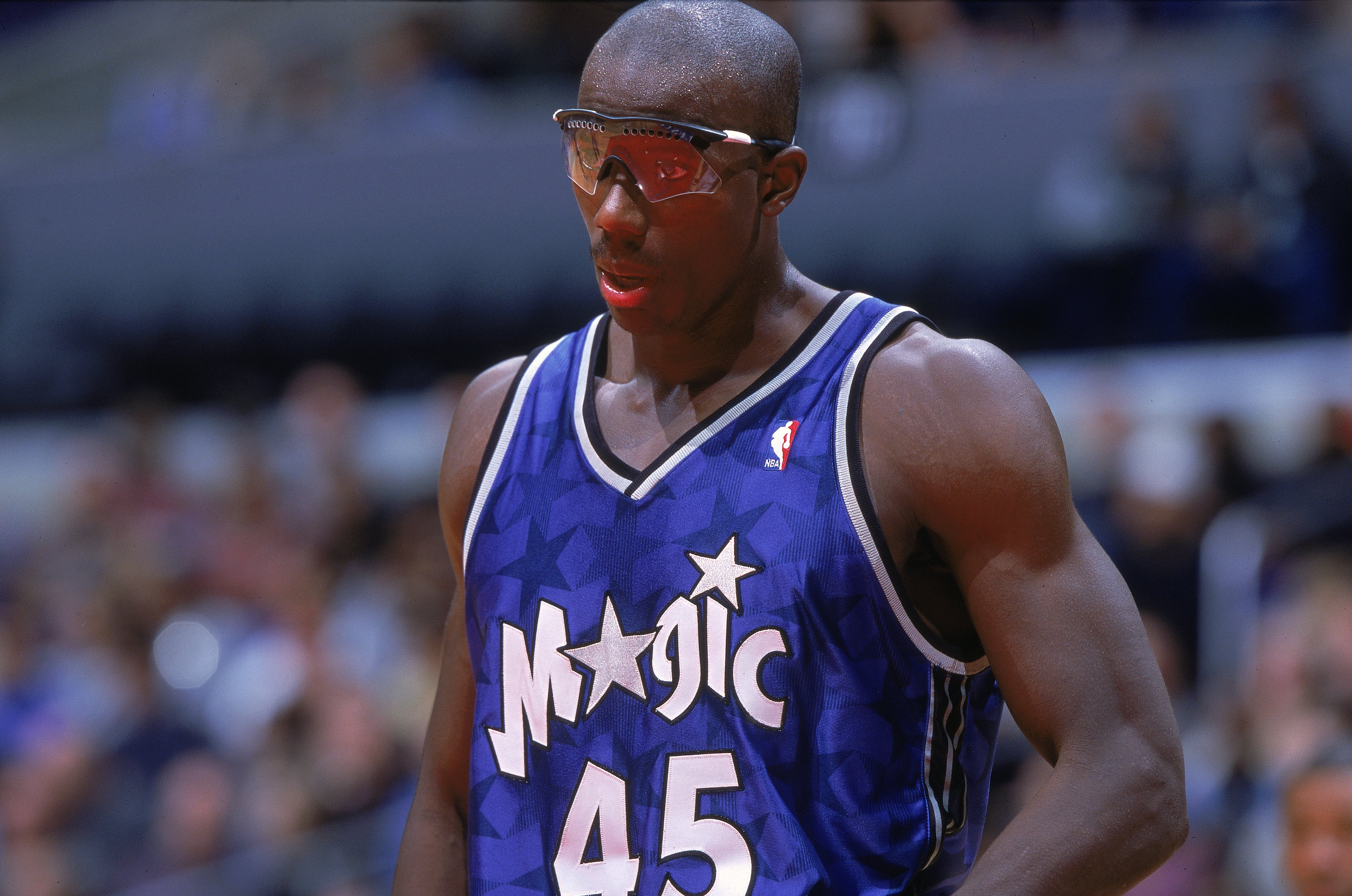 Bo Outlaw may have been the guy that instructed Amare Stoudemire to wear the protective eyewear when they were teammates on the Phoenix Suns.

Outlaw was very good defensive player for several years in the NBA.

When asked a question after a game where he scored a triple-double, the former Orlando Magic and Phoenix Suns player responded, "What's that, some kind of hamburger?". 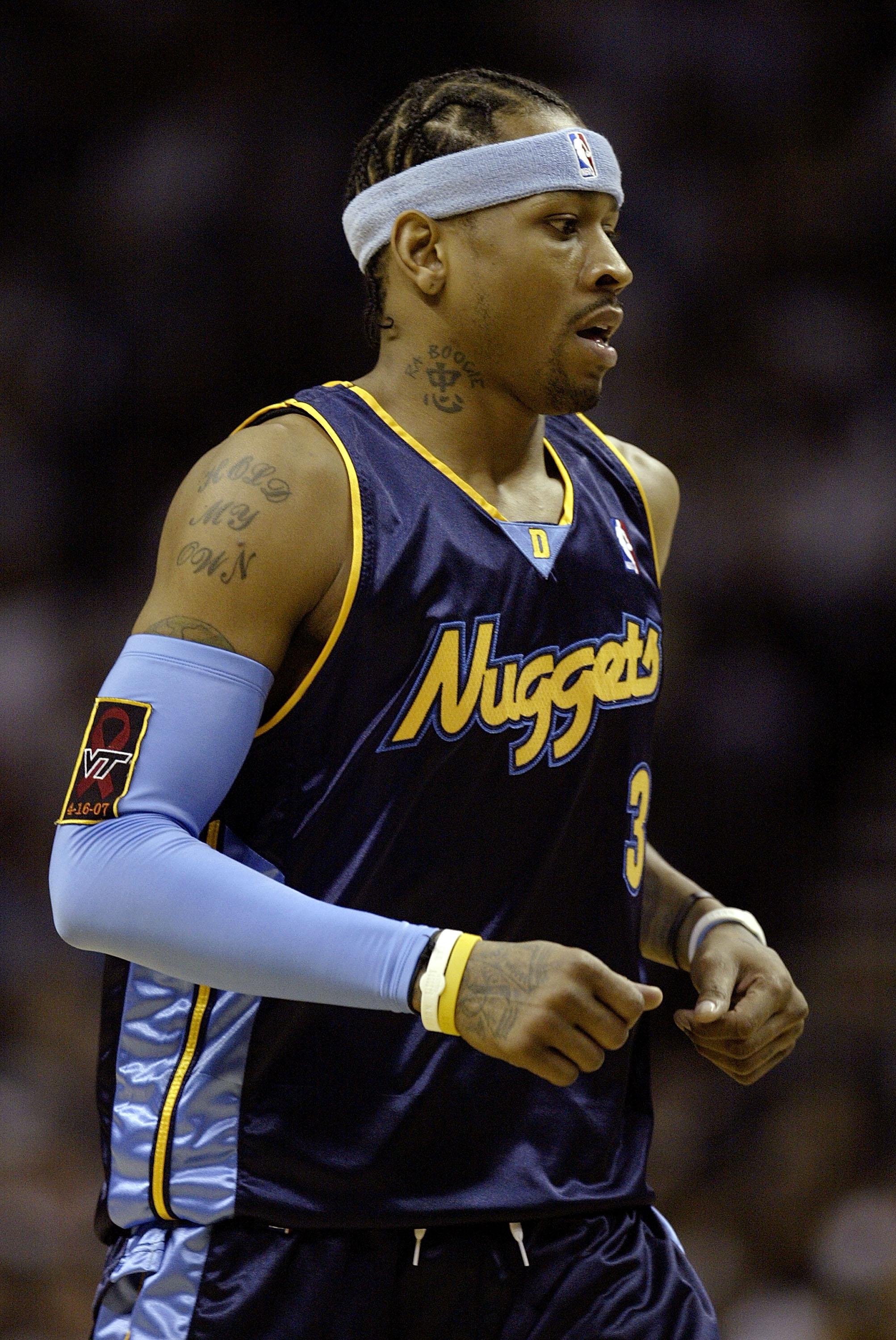 Allen Iverson starting wearing an armband after injuring his elbow.  It started a new trend in the NBA.

Stars such as Carmelo Anthony also started sporting the armband.

In this picture, the accessory features a patch dedicated to those who lost their lives in the Virginia Tech shooting.

It was a very nice gesture made by Iverson, who grew up in Newport News, Va. 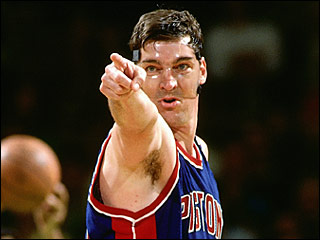 Bill Laimbeer, who started on the Detroit Pistons during the "Bad Boy" era, often had to wear a protective mask.

In this picture, he seems fine with wearing and is almost pointing to his opponent like, "you are the next one to have a broken nose." 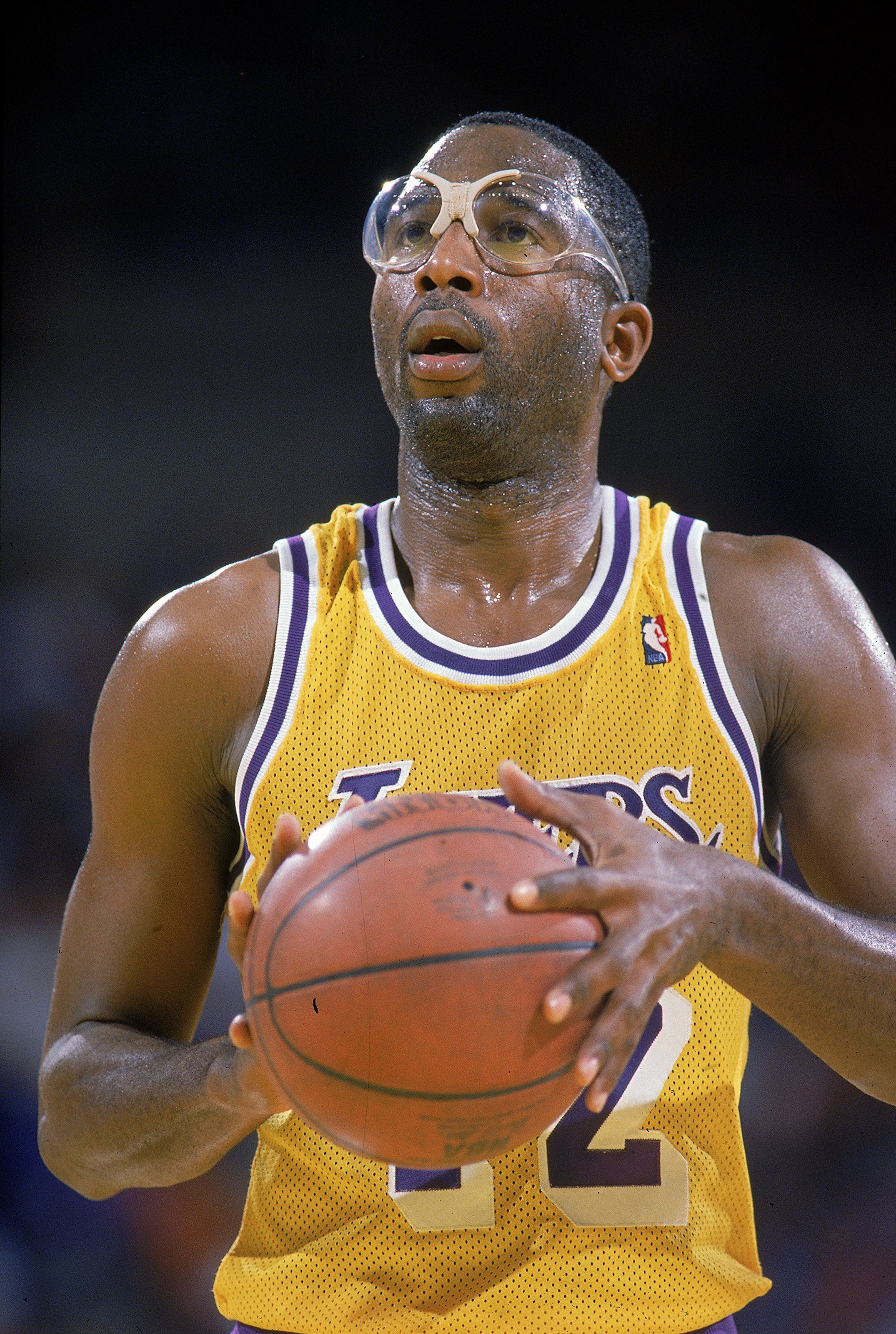 James Worthy is the first of the Los Angeles Lakers trio to be mentioned on the list.

Then he was lucky enough win multiple NBA titles by playing with Magic Johnson and Kareem Abdul-Jabbar on the Los Angeles Lakers.

The seven-time All Star was named MVP in the 1988 NBA Finals. 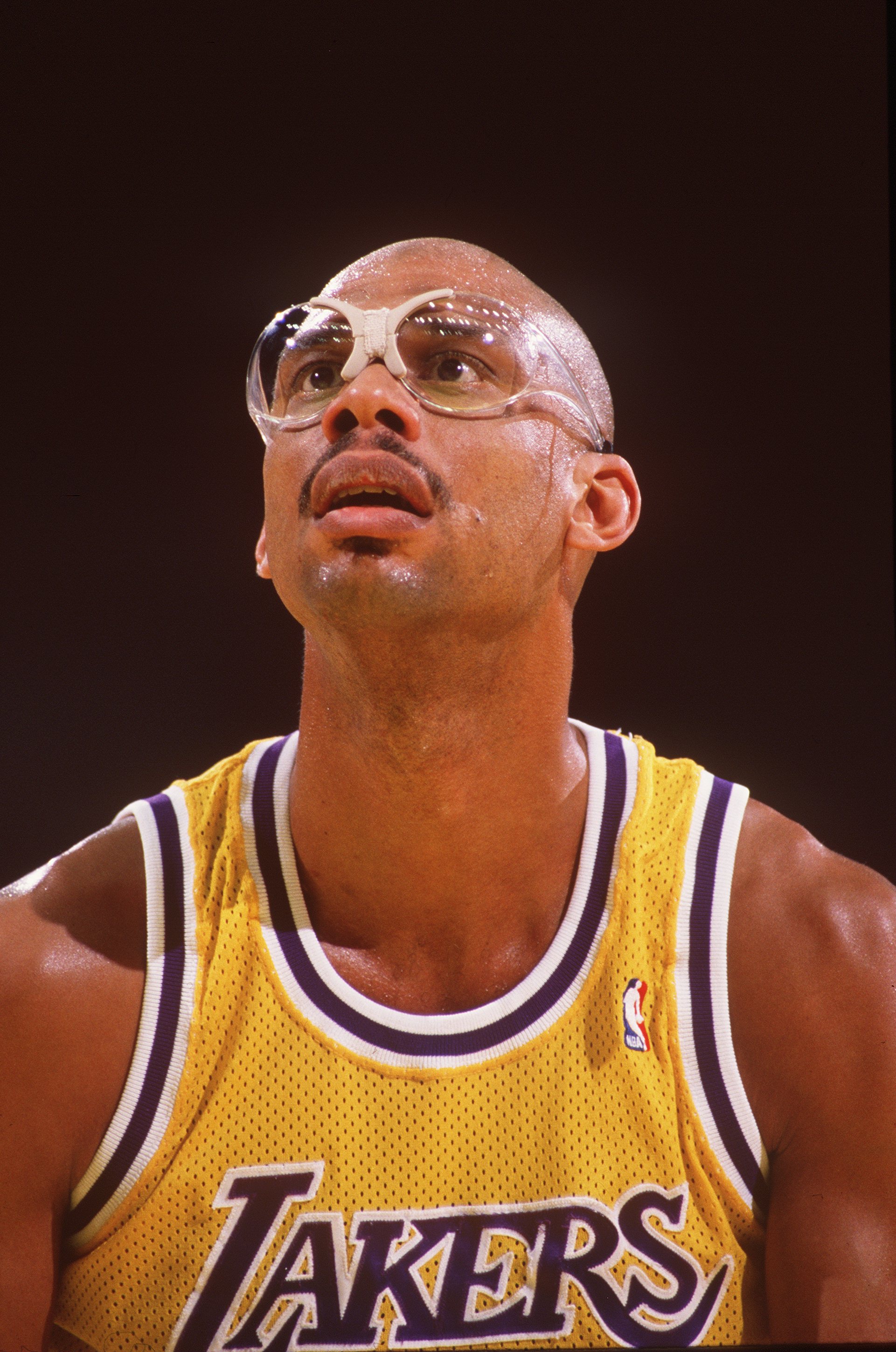 The second member and greatest player of the Los Angeles Lakers trio who wore goggles is Kareem Abdul-Jabbar.

Here are some of his accomplishments:

- NCAA Player of the Year 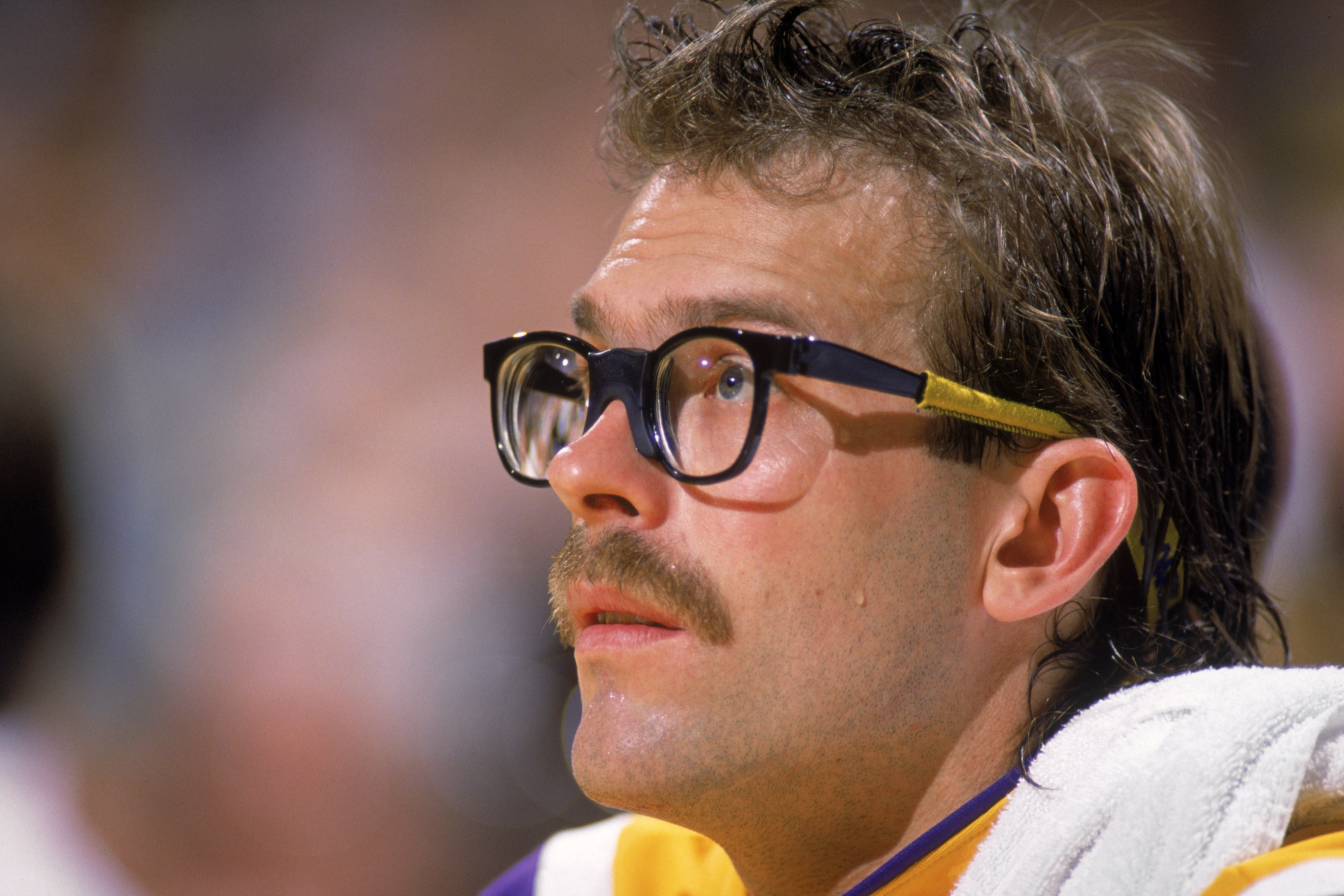 Kurt Rambis definitely had the coolest glasses on the Los Angeles Lakers.

He won four NBA titles in L.A. and became the head coach of the Minnesota Timberwolves in August 2009.

Another member of this list, Bill Laimbeer, is an assistant coach for Rambis. 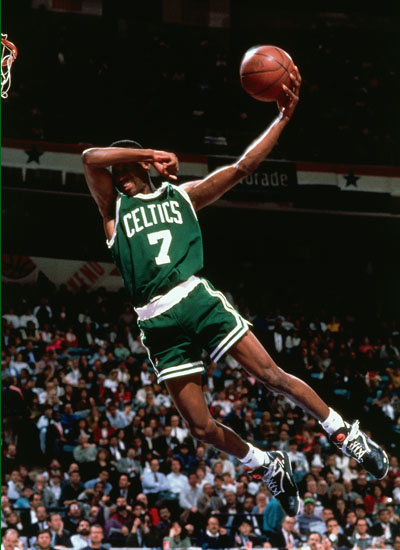 Here is a great video dedicated to his dunk and the shoes.

His "no-look dunk" won him the contest.  In 12 seasons, he played for the Boston Celtics, Toronto Raptors, and Orlando Magic. 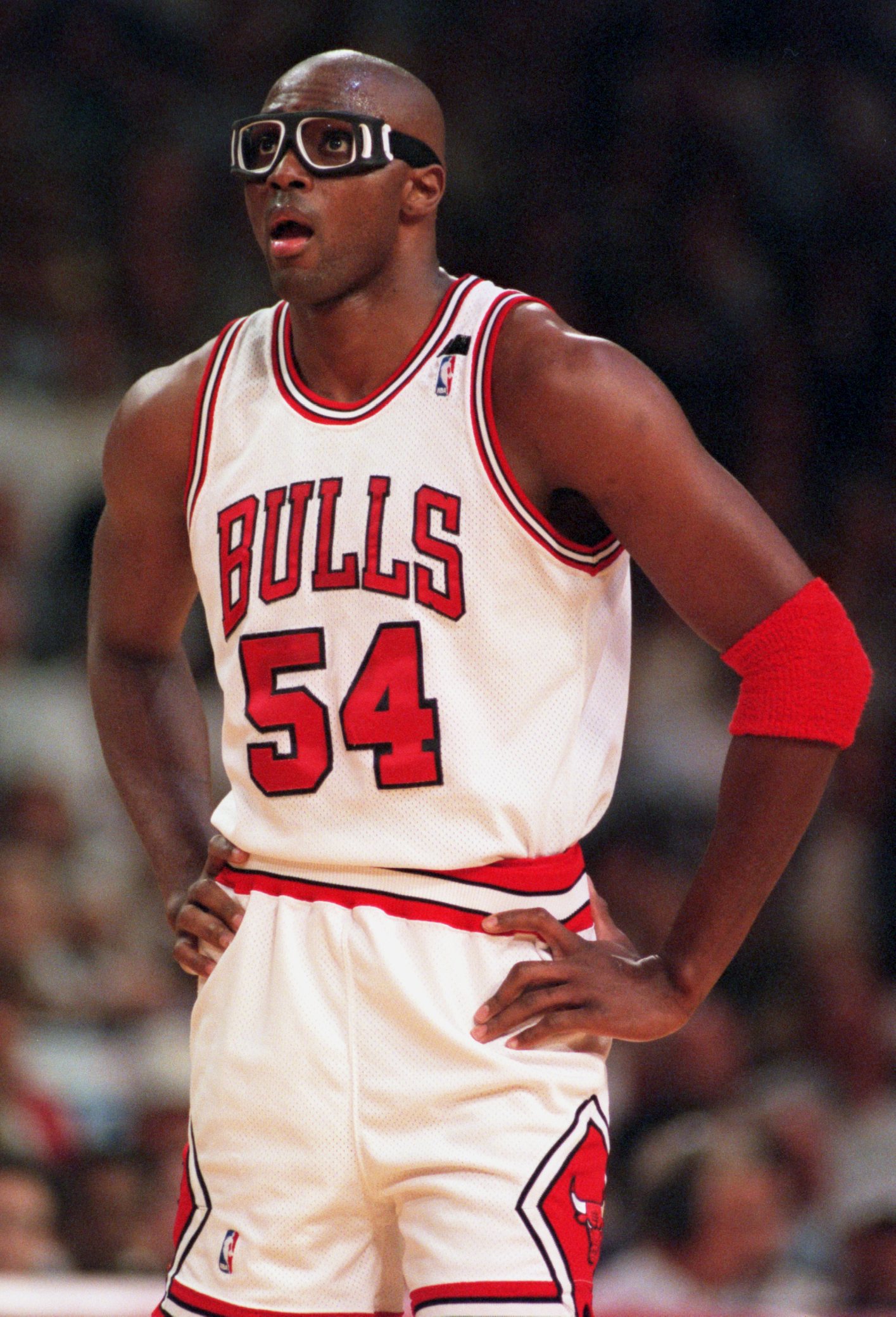 When asked what NBA players wore goggles, Horace Grant may be the first name that pops up.

Grant was member of four championship teams.  He won three titles with the Chicago Bulls early in his career and one title with the Los Angeles Lakers.

Horace also had an identical brother named Harvey Grant, who also played in the NBA.  However, Horace was a much better all-around player. 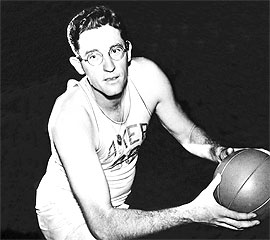 George Mikan is arguably the first and greatest basketball player to wear glasses.

He was on seven championship teams in eight years across three different leagues.

The center played in the NBL, BAA, and NBA.  He led the Minneapolis Lakers to six championships.

Some say he is the NBA's first true superstar.

2. Wilt Chamberlain and The Headband 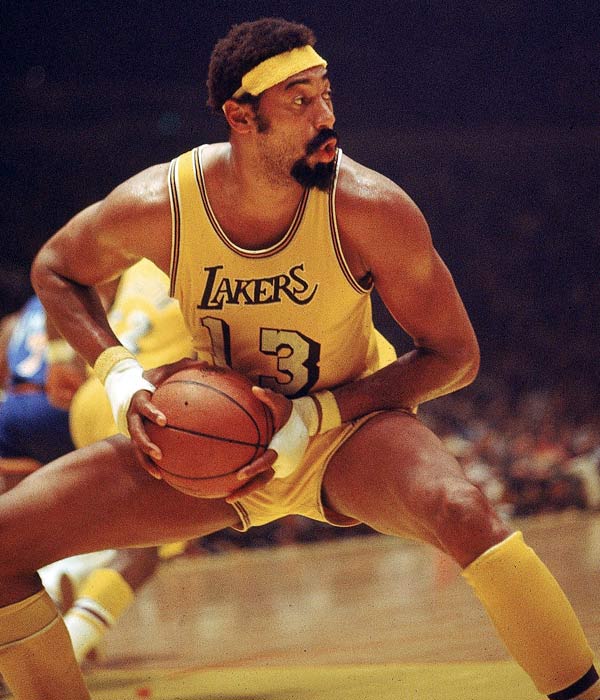 Wilt Chamberlain and Donald Earl Watts were the first basketball players to ever consistently wear a headband.  A fashion that was once criticized is now very common in the NBA.

Watts, who spent most of his career in Seattle, did not wear the headband as a fashion statement, but instead to prevent sweat from dripping into his eyes.

After trying to create one with tape, Watts saw Chamberlain wearing one and decided to buy a headband.

Clifford Robinson was also well known for wearing a headband and often got laughed at for wearing it. 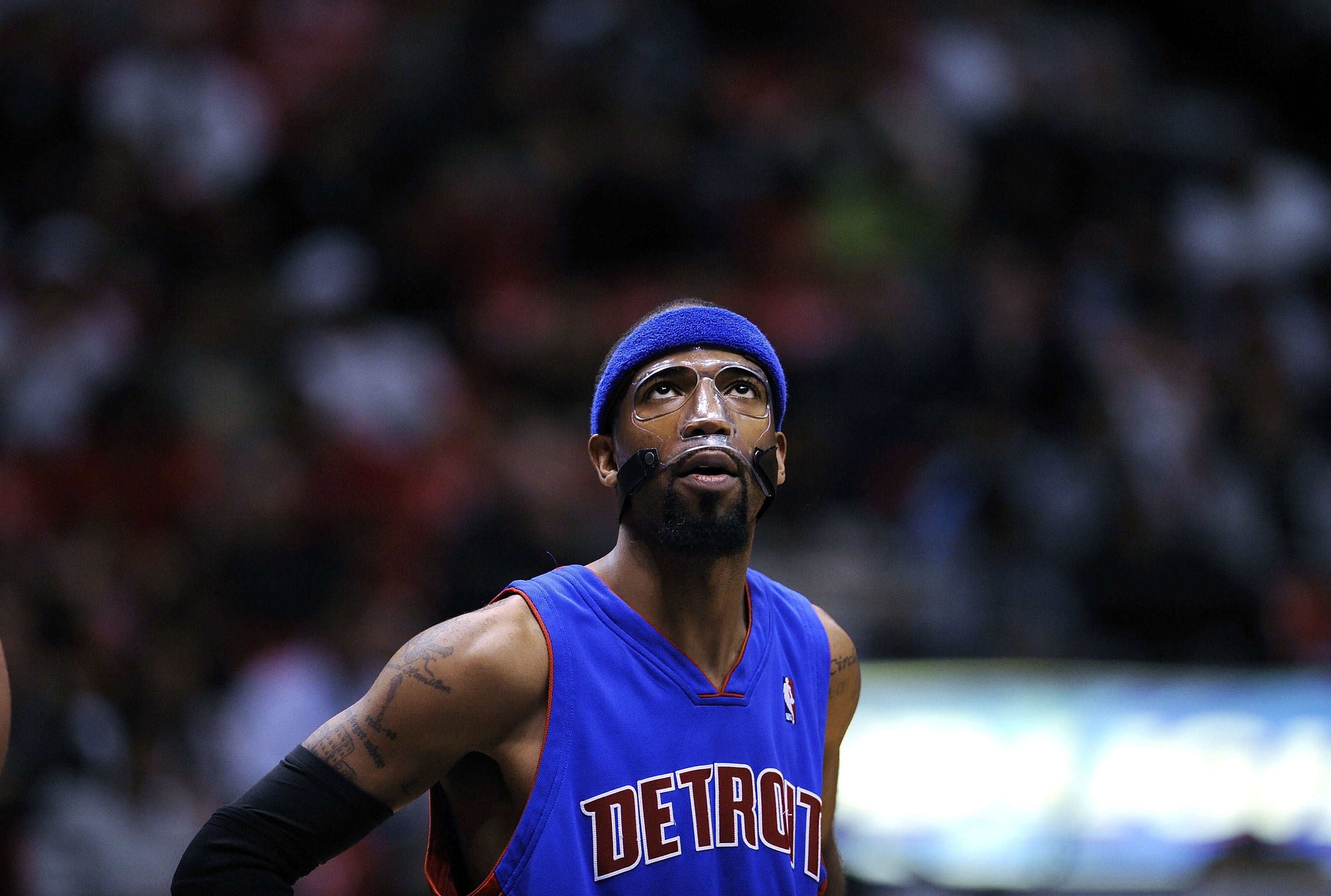 Richard Hamilton was not the first NBA player to wear the mask, but he will forever be associated with the protective headgear unlike any other player.

Hamilton fractured his nose three times in the 2003-2004 season.  That same season the Detroit Pistons went on to win the NBA Finals.

Ever since, he believes that the mask is a symbol of strength and says that, "It's like my Superman cape."

He has worn the mask for the last seven years and will continue to for the rest of his career.