The Yankees are in the postseason for the 15th time in 16 years.

It was based on a novel by Stephen King, in which an obese family man commits a hit-and-run, only the victim is the daughter of a witch, or a wizard, or a gypsy. Listen, 1996 was a long time ago.

Anyway, the witch/wizard/gypsy casts a hex on the fatty—"You keeel my daughter, and I curse you, thinnnnnnnner"—and the obese family man wastes away to nothing and (I think) eventually dies.

It wasn't a family movie.

I bring this up because I've been worried that Joe Girardi has a pretty horrible secret he's been hiding from us. It may involve his Jeep Wrangler and a dimly-lit street in Westchester.

Giardi is looking gaunt. Like, Lindsay-Lohan-on-a-Columbian-getaway gaunt. Of course, if you're not an idiot, you've probably deduced that his weight loss isn't the result of the plot line of an awful 14-year-old horror movie that nobody saw, but instead the struggles of the team he manages.

The Yankees headed into Wednesday's game in Toronto with a 11-14 record in September, by far their worst month of the season. A.J. Burnett—4-13 with a 6.67 ERA since the end of May—crapped the bed fantastically on Tuesday, and Girardi decided to all out a day later with his 20-game winner, CC Sabathia, on the mound and his full arsenal loaded into the lineup.

The result was a tidy 6-1 win that served as the clincher of the Yankees' 15th postseason appearance in 16 years. Hate all you want, talk about payroll all you wish, but that's quite an achievement.

Full disclosure, I may have spoke too soon last week when I said Sabathia's Cy Young chances were shot by his flameout against the Rays. His 8 1/3 innings of one-run ball on Wednesday was the epitome of an ace performance.

The Yankees don't sniff the playoffs this year without him. That's as strong as an endorsement I can give to the Big Man.

With one potential crisis averted, Girardi now must decided whether it's more important to give his regulars extra rest ahead of the ALDS and potentially settle for the wild card, or push through the weekend in an attempt to win the division and secure home-field advantage throughout the postseason.

It's a tricky dilemma with no clear answer. Girardi said after Wednesday that he would "pick his spots," which makes me believe he's going to play this conservatively.

If I were him, I would a) drink several milkshakes and eat many large bowls of Mrs. Girardi's pasta and b) rest the regulars on Thursday, then go for it in Boston.

I've been surprised by how many people believe the wild card is actually a preferable situation to winning the division. To those of you who think that, please note: Home-field advantage is a huge advantage in the postseason.

And if your logic is that you'd rather face the Twins than the Rangers in a short series, remember 2006, when Yankees fans were ecstatic they got the free-falling Tigers over the Twins in the ALDS. Four games later, the season was over.

Obviously, Sabathia shouldn't be involved in the Boston series, and I'm inclined to rest Mariano Rivera, who seems to need a breather. But I think everyone else should be involved. Well, except for Burnett. Did they even allow him to celebrate in the clubhouse last night?

- Having recently moved back to Los Angeles and forced to survive off the MLB.com package until next week, I was cut out of the postgame celebration coverage. This angered me, mostly because of the perverted joy I continue to get out of watching Kim Jones be doused with champagne and beer.

- Andy Pettitte thinks this Yankees team is as good as last year's version. 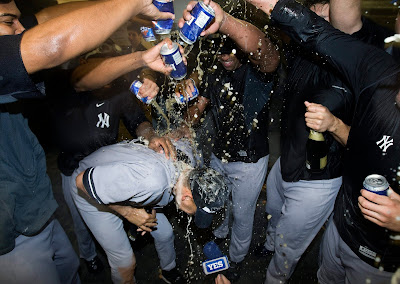 Pettitte is a very nice man, and his journey to comfort is well documented, but I think that statement tells me too much alcohol seeped into his pores last night.

- The LoHud Blog also had this line from A-Rod, who wasn't seen much during the clubhouse celebration and didn't have a drop of champagne on him at the end of the night.

“Nobody messes with the old guys any more. It’s all about the young guys.”

Obviously, the picture of Jeter to the right backs up Rodriguez's statement 110 percent.

Dan Hanzus writes the Yankees blog River & Sunset and can be reached via e-mail at dhanzus@gmail.com. Follow Dan on Twitter @danhanzus.

Taillon: Trade to Yankees Has 'Kind of Lit a Fire Under Me'

Taillon: Trade to Yankees Has 'Kind of Lit a Fire Under Me'

Report: 'Informed Speculation' Has Kris Bryant Most Likely to Land with Mets or Jays

Report: 'Informed Speculation' Has Kris Bryant Most Likely to Land with Mets or Jays