New Jersey Devils: Five Reasons Why They Are More Dangerous Than Ever in 2010-11 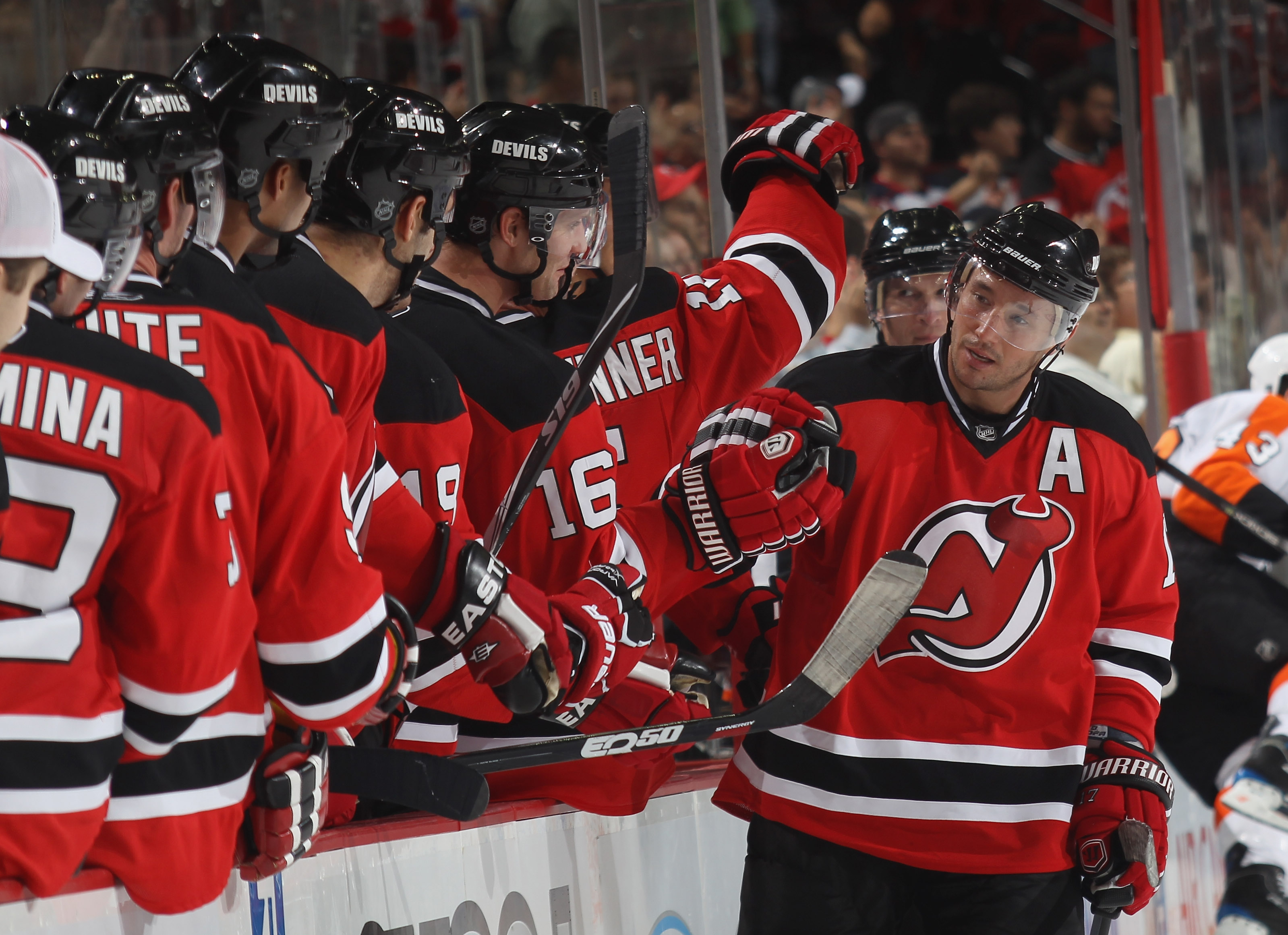 Excellent regular seasons have been rather common in the past decade and a half for the New Jersey Devils.

Over the past few seasons, first-round playoff exits have been just as frequent. Jersey's Team hasn't made the second round since the 2007 playoffs after being eliminated from the first round in the past three postseasons.

And all three have been excruciating: 2008 against the archrival New York Rangers; 2009 against the Carolina Hurricanes, where the Devils gave up two goals in 50 seconds to lose by a score of 4-3 in Game 7; and 2010 against the Philadelphia Flyers, a team that was less talented but looked like...well...it just wanted it more.

New Jersey retooled and brought in some key pieces this offseason, but the biggest piece is probably the one they brought back in Ilya Kovalchuk, who signed a 15-year, $100 million deal after about six weeks of that pesky NHL collective bargaining agreement getting in the way.

The Devils will enter the 2010-11 season hoping to avoid their fourth straight first-round exit, but fortunately this may be shaping up to be their best team in four years.

This slideshow will explain five reasons why the Devils will be one of the best teams in not just the Eastern Conference, but all of the National Hockey League.

1. Martin Brodeur Has a Solid Backup and Should Receive More Rest 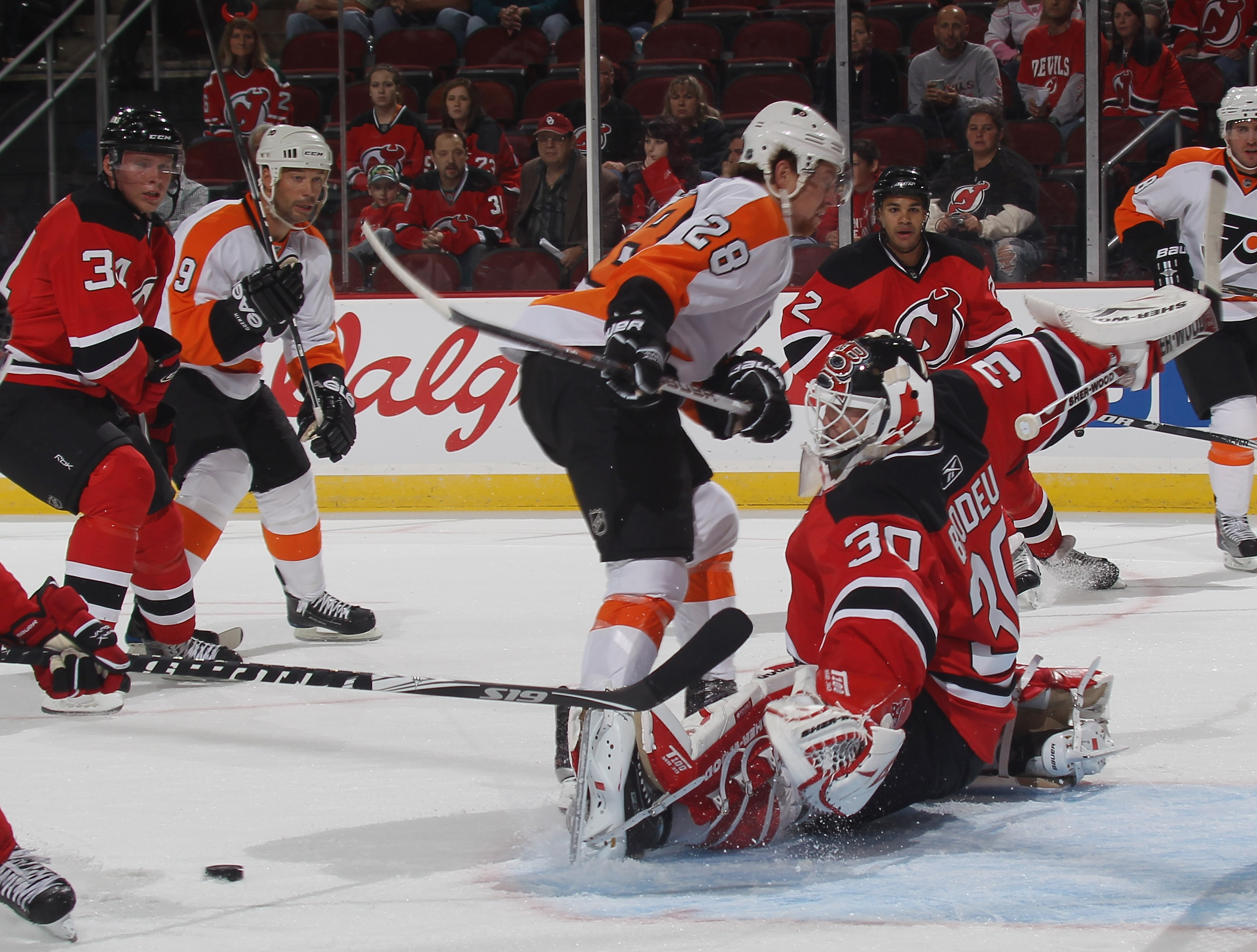 The Devils signed goaltender Johan Hedberg on the first day of free agency, which should give a glimpse into the Devils' plans.

There's a notion around the league that part of the Devils' first-round failures have been due to Brodeur's heavy workload before the playoffs, when the games are more physical and taxing.

Hedberg will give the Devils a veteran goaltender whom they should be able to count on for as many games as necessary. He won 21 of his 43 starts with the Thrashers last year with a respectable 2.62 GAA.

If the plan is to rest Brodeur more often holds true this year, you can probably expect Hedberg to start anywhere from 15-20 games. And a rested Brodeur is more than likely a better Brodeur.

The Devils lost defenseman Paul Martin to the Pittsburgh Penguins via free agency, but gained Anton Volchenkov and Henrik Tallinder.

Volchenkov has a reputation as one of the most physical defensemen in the league, something the Devils have been missing ever since Scott Stevens departed in 2004.

Tallinder had been a Buffalo Sabre mainstay since making his debut in 2001. He's noted for being a big, imposing defenseman with improving physical play. He was often given the role of shutting down the opposing team's No. 1 scorer.

Add those two to the already physical Colin White and Mark Fraser, and the Devils might have one of their most intimidating defenses in recent years.

3. The Leadership Has Improved with Jason Arnott's Return

The 2000 Stanley Cup hero has returned to try and bring home another one.

There was some news made during the playoffs that captain Jamie Langenbrunner's attitude was not that of a captain's. This stemmed from Langenbrunner being benched in a late regular-season game by then-head coach Jacques Lemaire.

When asked if he was still captain after being benched, a position held in high regard among hockey players, he responded, "No comment."

There have been rumors of Langenbrunner being on the move, possibly to Colorado according to this article.

While the loss of their captain would not be a positive thing, it's completely reasonable to see Zach Parise or Ilya Kovalchuk step in to the captaincy role.

Arnott, who served as a captain in Nashville, could help ease Parise or Kovalchuk into the role. If Langenbrunner stays, it's just icing on the cake because Arnott would be one of the better assistant captains in the game.

This has the possibility of being one of the most dynamic lines in all of hockey. You can count on both Parise and Kovalchuk to score around 40 goals, and Travis Zajac has shown enough promise where you can expect 30 goals.

The key word in that paragraph above is "possibility." If the other three lines aren't scoring, first-year Jersey head coach John MacLean probably won't hesitate to spread the wealth.

Fortunately, with forwards such as Patrik Elias, Jamie Langenbrunner, and Jason Arnott all worthy of scoring 30 goals, and supporting forwards such as David Clarkson, Brian Rolston, and Dainius Zubrus capable of scoring at any time, it's quite possible we could see the Parise-Zajac-Kovalchuk roaming the ice more often than not.

The offense may wind up being one of the best in Devils history if it can come to its full potential—to the point where it could even compete with the Capitals offense. That's an exciting thought.

5. John MacLean Finally Has the Reigns 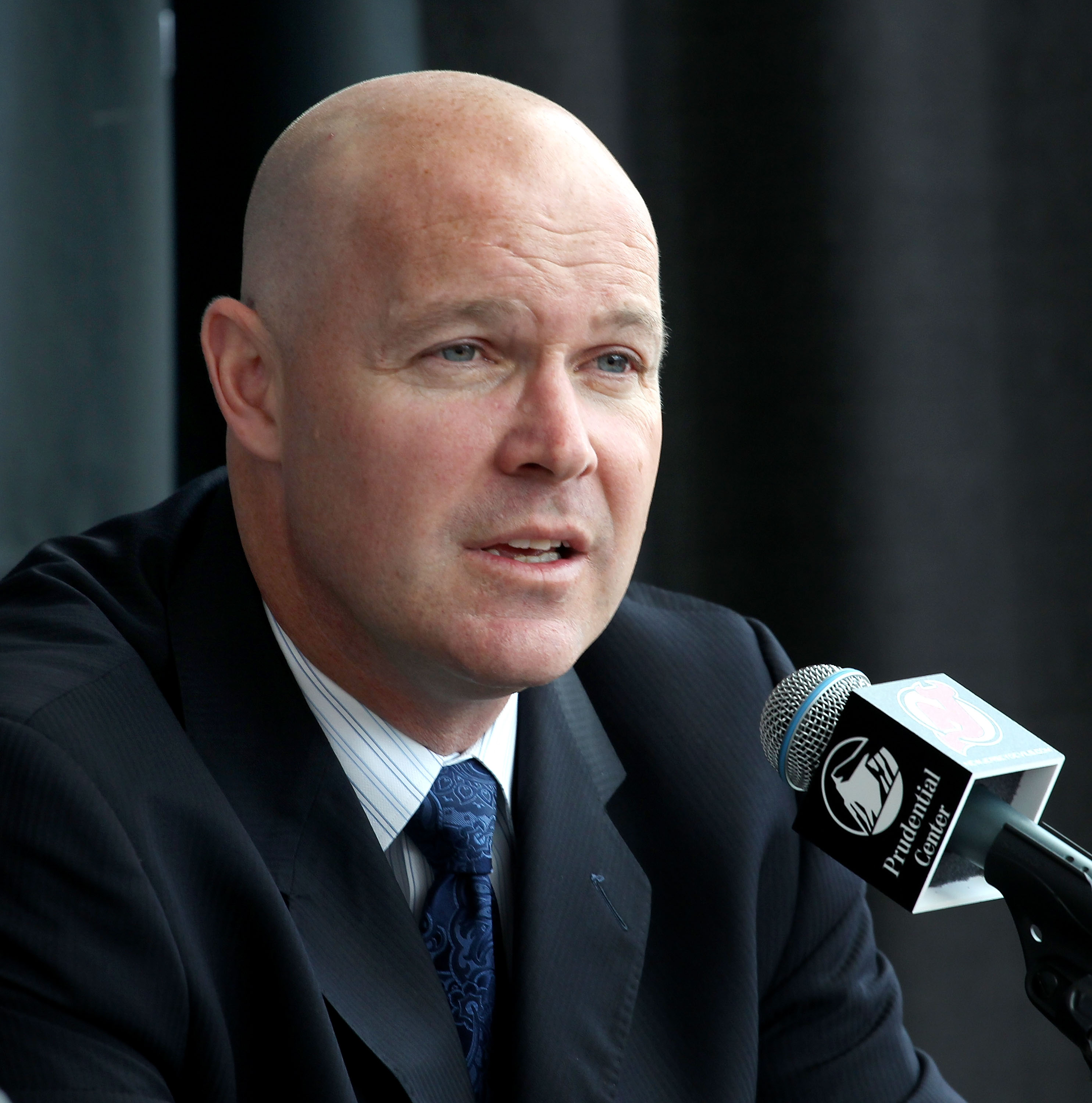 Anyone who follows the Devils will tell you that John MacLean has paid his dues to get to the head coaching position.

He was an assistant coach for the Devils from 2002 until 2009, where he was reassigned to the head coaching position of the Devils' AHL affiliate in Lowell. After leading those Devils to the playoffs, MacLean was named head coach after Jacques Lemaire stepped down.

MacLean has been around the Devils long enough to know how the system works and was in the minors last year, so he knows the potential of some of the younger players. There wasn't a candidate out there that was more familiar with the Devils' playing style than MacLean.

Make no mistake: Lamoriello hired MacLean expecting him to be here for the long haul—and into the days when Martin Brodeur is gone.

Expect MacLean to stay true to the Devils' defensive system, but also expect him to be more than willing to experiment with the many offensive toys with whom Lamoriello has stocked the roster. 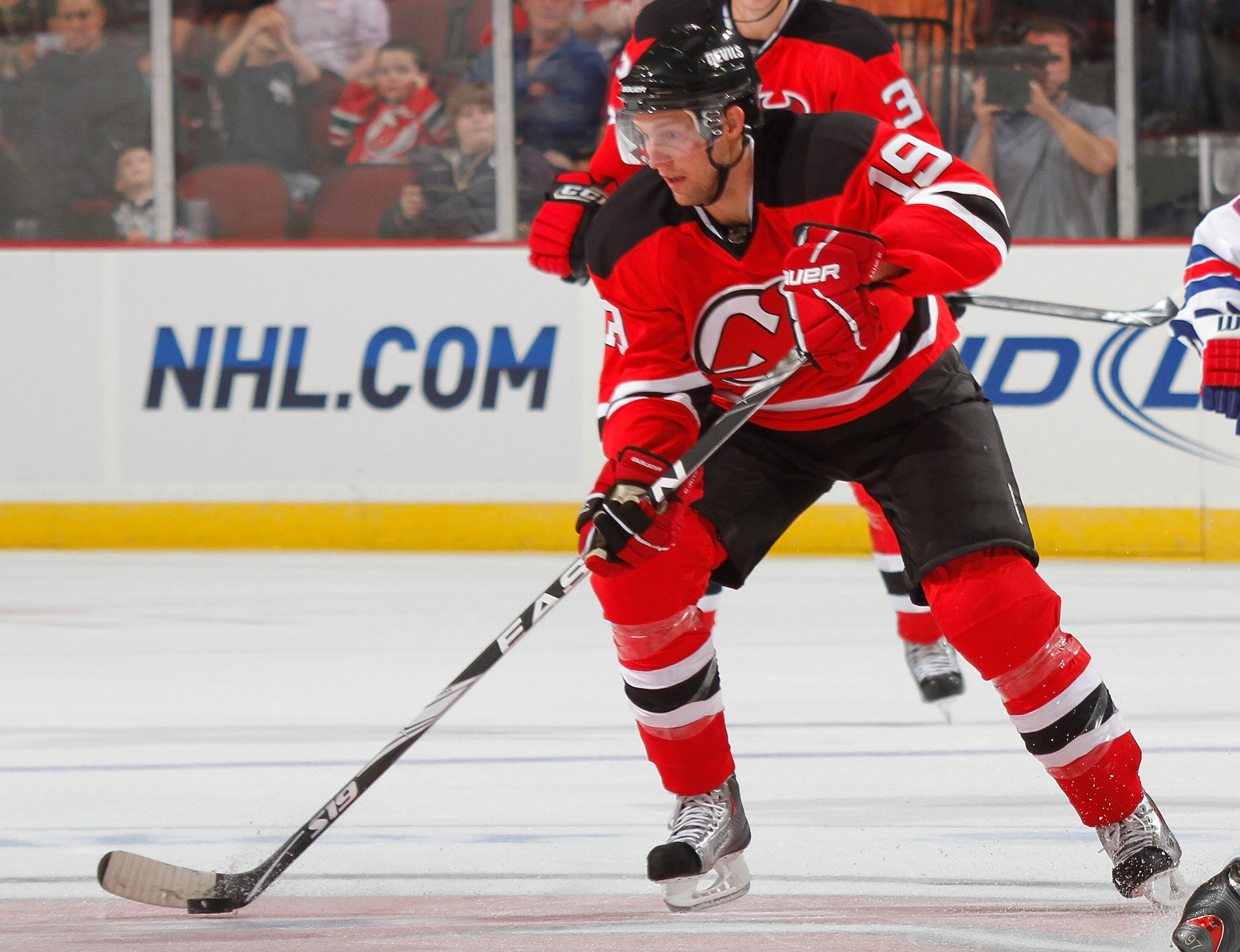 Do you think some reasons are more important than others? If so, why?