Jacoby Ford: Oakland Raiders Receiver Ready to Break Out in 2011 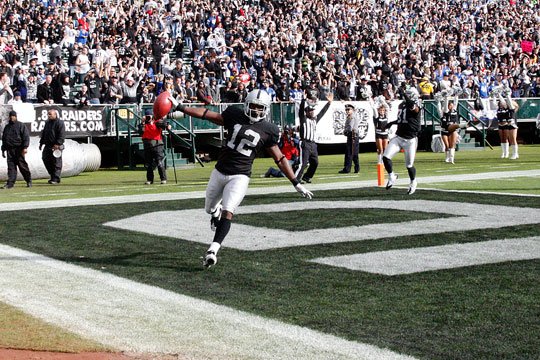 It seems like all I'm hearing these days is how the Oakland Raiders need a veteran, playmaking receiver. I don't believe that to be the case because there is plenty of receiver talent currently on the roster ready to go.

One of them is this little guy named Jacoby Ford who exploded onto the scene in the second half of the 2010 season.

Barring injury, Ford is sure to break out in 2011.

Turn the page to see why. 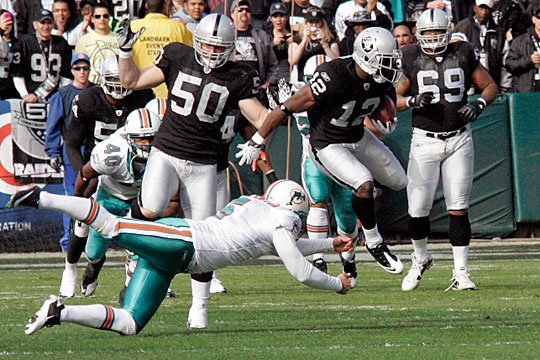 Jacoby Ford started his rookie season as a kick return specialist and a great one at that. He racked up a total of 1,280 yards in returns and tied for the league lead with three touchdowns.

He also tied for the league for longest touchdown return with a 101-yard touchdown return. As a receiver, he didn't have a chance until midway through the season and ended up with 470 yards on 25 catches for a 18.8-yard average with two touchdowns.

Pittsburgh Steelers' speedy wideout Mike Wallace led the NFL with every two catches being over 20 yards and every six over 40 yards. That's pretty good company for the young, speedy Ford that has a pretty good rookie season to build on. 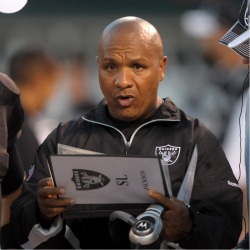 Why does his encore look so promising?

Ford struggled to get on the field as a receiver in his rookie year mainly because offensive coordinator Hue Jackson wasn't sure what he could do. Jackson is now the head coach and knows what he can do now, so he is sure to dial up more plays for Ford.

More targets should have his totals somewhere near there in 2011. 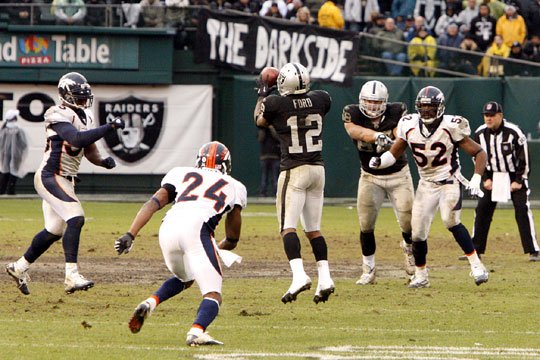 The main part of any receiver's skill set is hands and Ford's hands improved tremendously throughout 2010. He had five drops in 25 five catches which puts him around the bottom of the league with a 16.7 drop percentage.

But if you watch him play, you can see he is a natural pass catcher that probably dropped balls because of focus or comfort in the offense. If you look at Ford down the stretch of the season, you can clearly see that his focus and comfort improved by miles.

That's because he got more reps in practice too.

Raider Nation looks forward to seeing a whole lot fewer drops out of Ford in his second year. 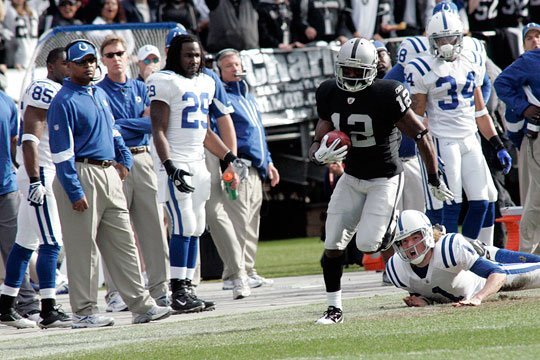 Speed has always been a prerequisite to be an Oakland Raider receiver and Ford has plenty of it. Ford ran a 4.28 40-yard dash to be the fastest man in the 2010 combine.

He plays to if not faster than his clocked speed as I have not seen a corner that can run with him. His speed is also on display during kick returns as his aforementioned 101-yard kick return for a touchdown would indicate.

Ford creates big plays and his feet creates those big plays for him. 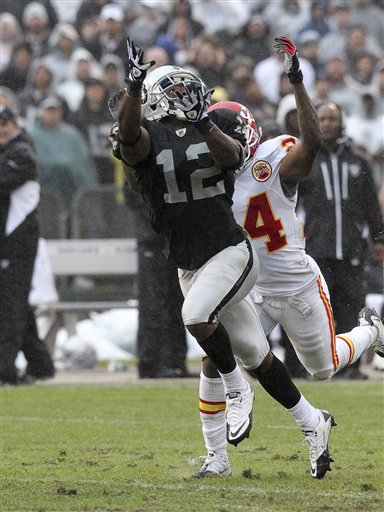 He's just as quick as he is fast.

His quickness gives him a step on a defender while his speed allows him to continue running away. This makes Ford almost impossible to keep up with as this combination will continue to get him keep open.

Getting open will obviously get Ford more targets in 2011. 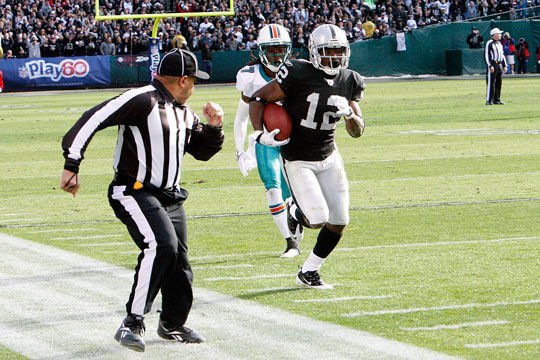 Ford is a kick returner, and that skill easily translates to his running after the catch. There will be times that the deep ball simply isn't there and the Raiders will have to throw underneath.

Ford has the ability to make people miss to go with his speed and that will enable him to take a short pass to the house. Hitting Ford underneath is about the safest thing a quarterback can do on the football field.

But the result can be the same as a risky deep ball. 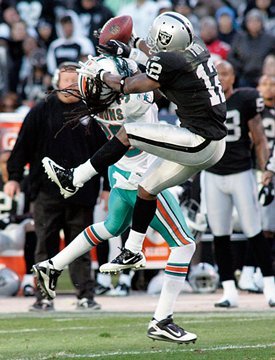 Yet he will go up and take the ball from a defender in any type of jump ball situation as if that ball belongs to him and him only. One has to wonder how high he can leap in a football game oppose to jumping just to jump.

This is where heart, determination and desire come in.

Ford wants the ball and will come down with it if you give him a smidgen of a shot to get it. It doesn't have to be a perfectly thrown ball nor does he have to be wide open.

Ford will not let a ball get intercepted if given a chance to make a play.

He will simply turn a ball thrown into coverage into a completion. 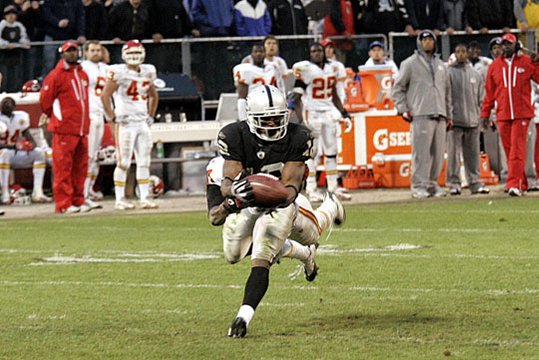 WHO CAN MAKE THAT PLAY?

Ford certainly can as that oversized heart he has doesn't pump fear through his veins in big moments. It doesn't look like there is a single solitary moment that's too big for Ford.

How about the Week 9 matchup the Raiders had against the Kansas City Chiefs?

The Raiders were down 10-0 at halftime and Ford takes the openning second half kickoff for a touchdown. If that isn't enough, he took and 29-yard pass away from a defender to set up a game tying field goal in the closing seconds of regulation.

To top it all off, he cooked supposed Chief shut-down corner Brandon Flowers for 47 yards to set up the game winning field goal. 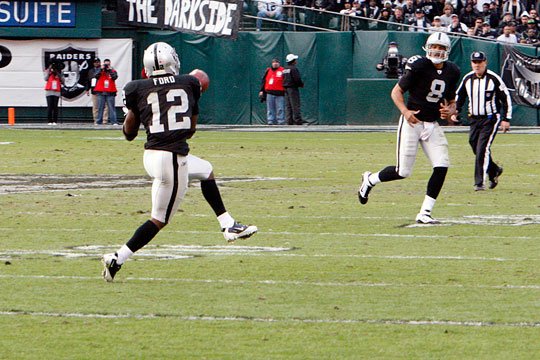 Oakland Raider quarterback Jason Campbell struggled early in 2010, trying to learn and trust new receivers. Campbell seemed to try too hard to be perfect instead of just giving his guys a chance to make plays.

Campbell gave Ford a chance to make those plays in Week 9 vs the Chiefs and Ford rewarded him. From that point on, Campbell seemed to have developed a trust in him and was successful throwing his way for the rest of the season.

This connection is working together as I write this, so I expect it to be that much stronger in 2011. 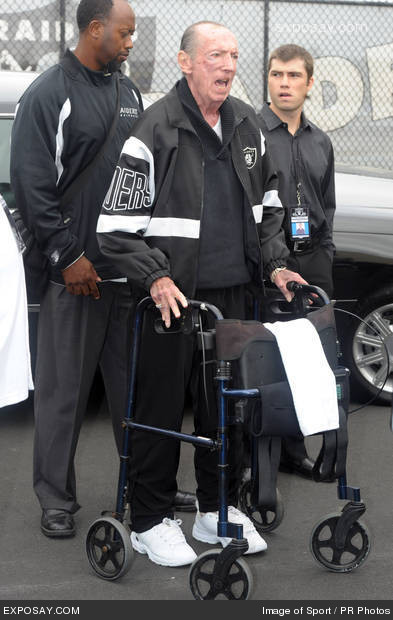 The leash on fellow receiver Darrius Heyward-Bey just go that much shorter. Heyward-Bey was drafted early in the first round in 2009 because Davis has been looking for the next Cliff Branch for decades.

Heyward-Bey has worked as hard as one can work but he just isn't a natural pass catcher. Heyward-Bey has one more year to prove he's not a bust but also has a faster receiver that did more in a half a season in his rookie year than he did in his first two years.

The stats during that time frame are pretty even but Ford has a huge edge in the way of impact. Having a guy like Ford will make Davis a little more willing to count his losses with Heyward-Bey and sit him if Heyward-Bey's lack of production continues.

It's a lot like the trade for the big-armed Campbell making it easier to let go of Jamarcus Russell. 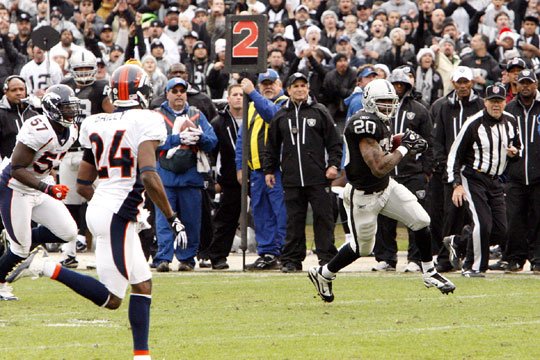 Darren McFadden was finally able to show his ability in 2010.

As a result, all eyes will be on him in 2011 with opposing defenses stacking the box with eight men. This leads to a single high safety that can't cheat over to Ford's side because there will be speed on the other side.

Fords vertical game will flourish because of it. 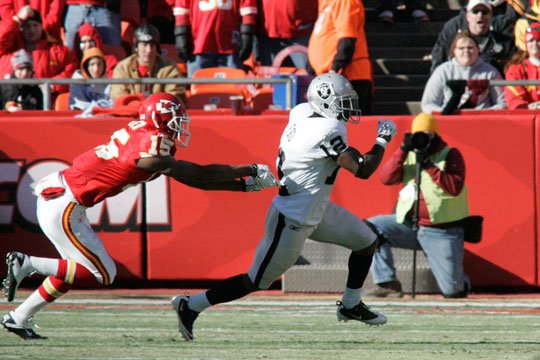 The Raiders have so much speed that their possession receiver (Chaz Schilens) even runs a 4.33 40-yard dash. This means the Raiders have plenty of speed to run deep routes to clear things out for Ford underneath.

Ford can then use his aforementioned ability to run after the catch to make plays. Tight end Zach Miller, fullback Marcel Reece and McFadden will also be underneath options, so Ford shouldn't see much underneath, bracket coverage.

Ford is a dangerous man to leave without extra attention anywhere. 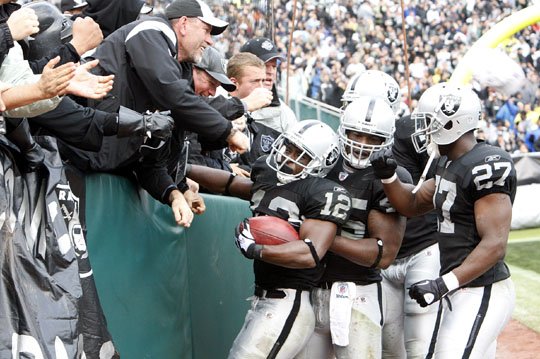 With every ablility a receiver could ever need, everything is right there for Jacoby Ford to have a breakout season. The running game the Raiders have will take most of the opposing teams attention.

Campbell, his other teammates, and the rest of the organization now know what they have in this man. They also have one of the best tight ends in the game with speed to spread all over the field (Muphy, Schilens and Heyward-Bey).

This will make it easier for Ford to sneak in the back door for a breakout season.