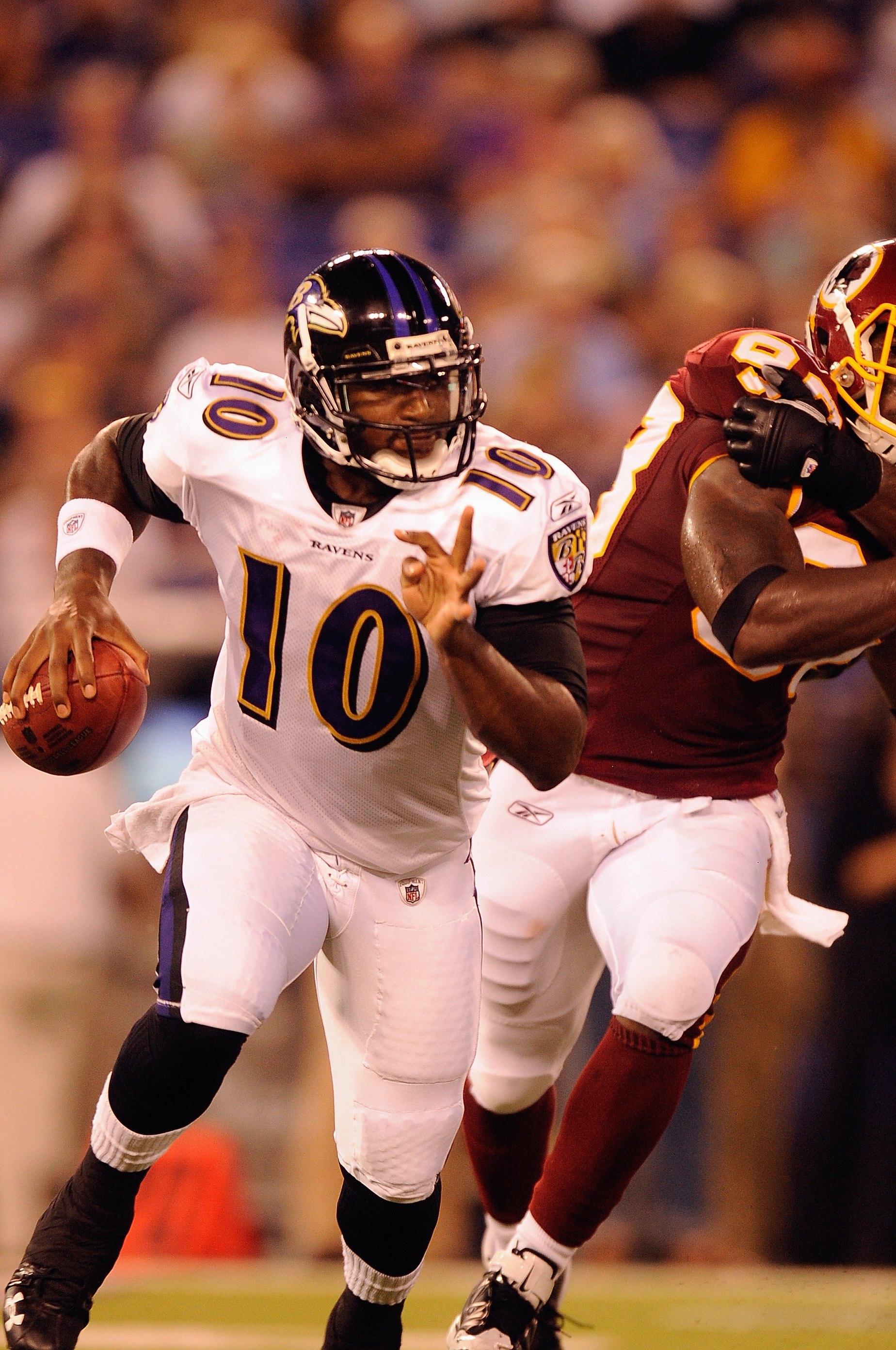 It's preseason week two, which means the Ravens are headed down I95 to visit the Washington Redskins.

Predictions on the outcome of a preseason game are like predicting the weather  - a lot of people making a lot of money being wrong a lot of the time.

Instead of focusing on who wins, here are 10 things Ravens fans should watch.

How does Fabian Washington Look? 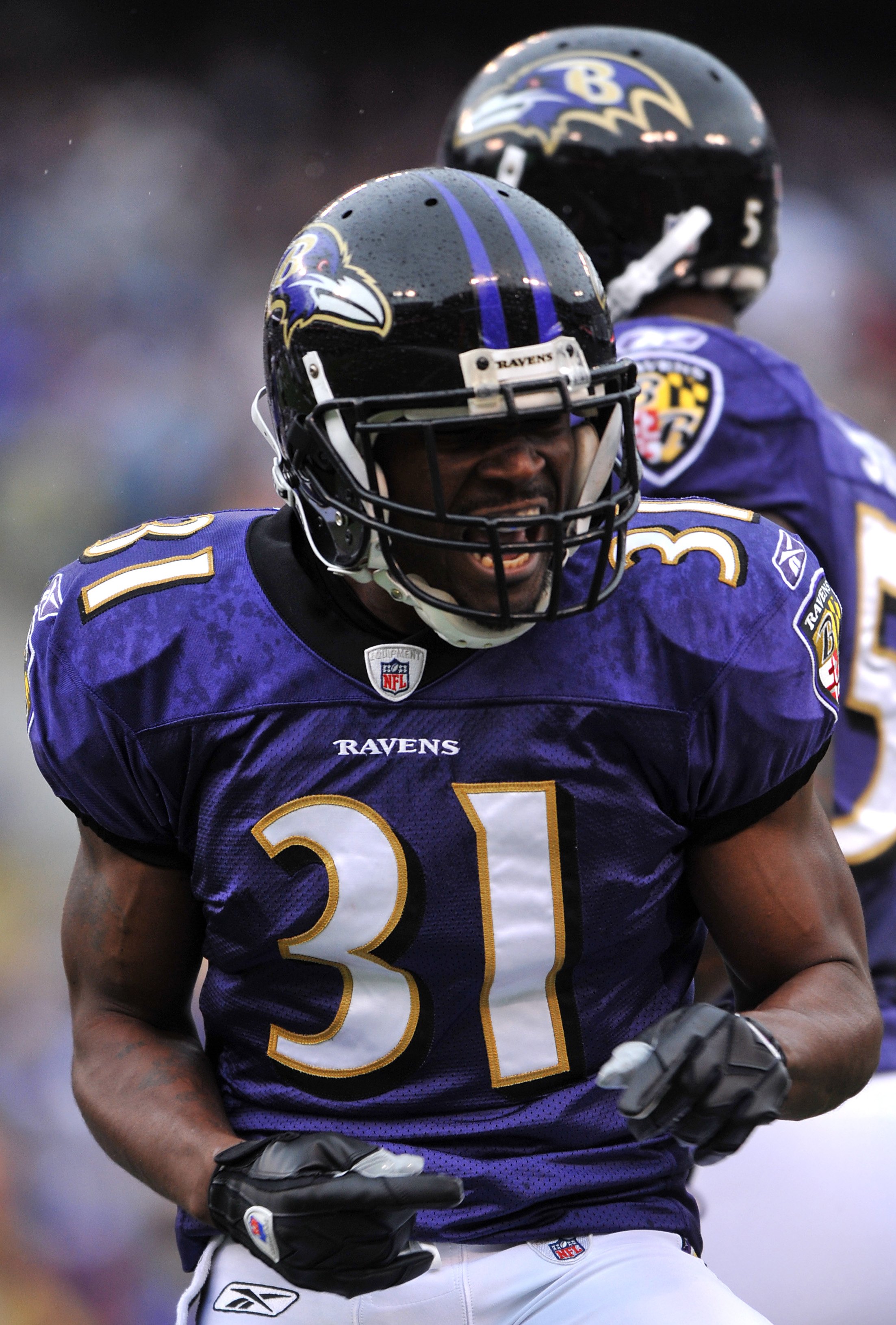 According to reports out of training camp, Fabian Washington is ready to play, and will be on the field against the Redskins.

While Washington showed sparks of brilliance in 2008, his inconsistent play in 2009 frustrated some fans.  When he tore his ACL in late November against Indianapolis, we noticed, and he was missed.

Fans should watch to see how comfortable he looks covering the likes of Moss, Randle El, and Thomas.  If he's full speed, the concern about the secondary subsides a little. 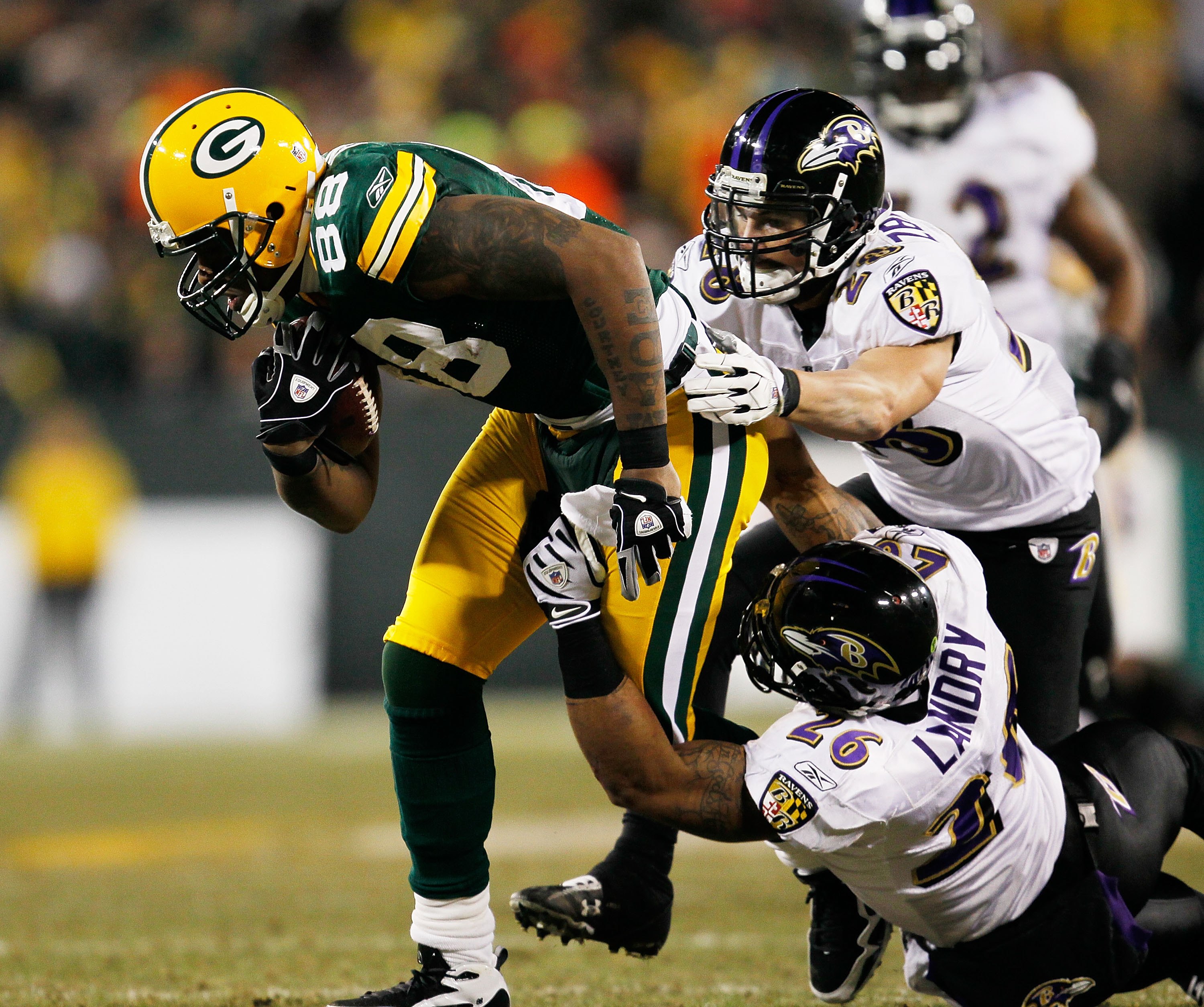 While we are on the subject of the Secondary, Ravens fans should consider who will step up to fill the void still left by Ed Reed, Lardarius Webb, and the loss of Dominique Foxworth at the beginning of camp for the year.

Webb's rehab is ahead of schedule, and some are predicting he could be ready to play opening day.  Based on what's normal for the injury he suffered, the Ravens need to prepare for him to be unable to play until Week 7.  Likewise, the MNF gang thought Reed would be back for Week 1, it is more realistic he will remain on the PUP until later in the season.

While those three are out, who will step up and perhaps be the next superstar in the secondary?  Cary Williams looked great against the Panthers, but he's out for the first two games as well.

Chris Carr is also suffering from a hamstring injury, although it sounds like he should be OK, even though he may not play this weekend.

Behind them, who will make plays and stand out?  Prince Miller?  Travis Fischer?

It's a key concern for the team.

Cousins As A Fill In 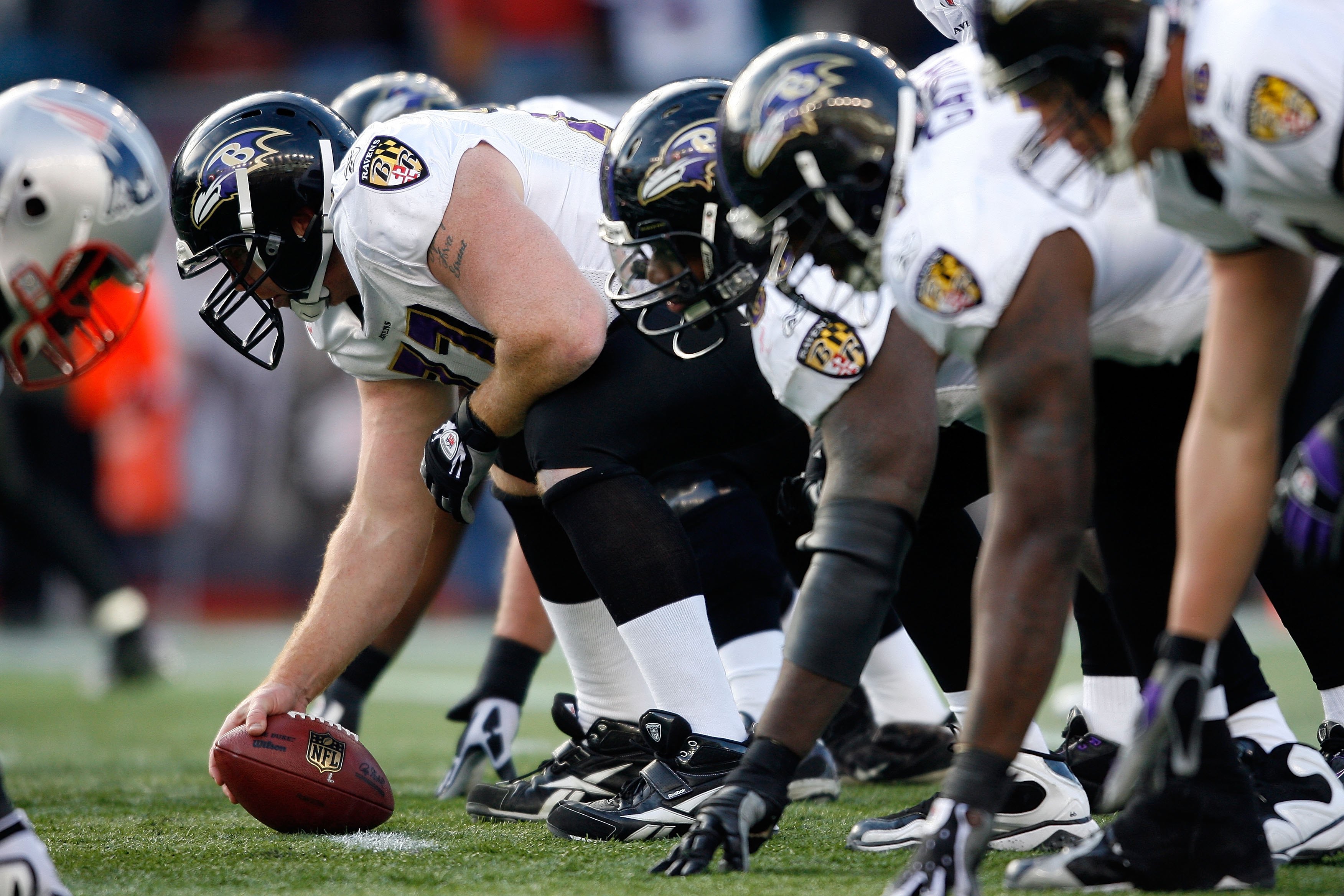 With Jared Gaither out for the rest of the preseason (at least, possibly more), Oniel Cousins will start at Right Tackle.

Can he fill those shoes?

Cousins went down with a headache on Thursday, to be replaced by Yanda, who is a natural Guard.

How will the Tackles behind him look?

Left Tackle might get all the glory, but Cousins needs to rise to the challenge and live up to the talent everyone thinks he has.

What everyone thought could be one of the best Offensive Lines in the AFC now creates a big question mark.

Who Will Start Next to Ray Lewis? 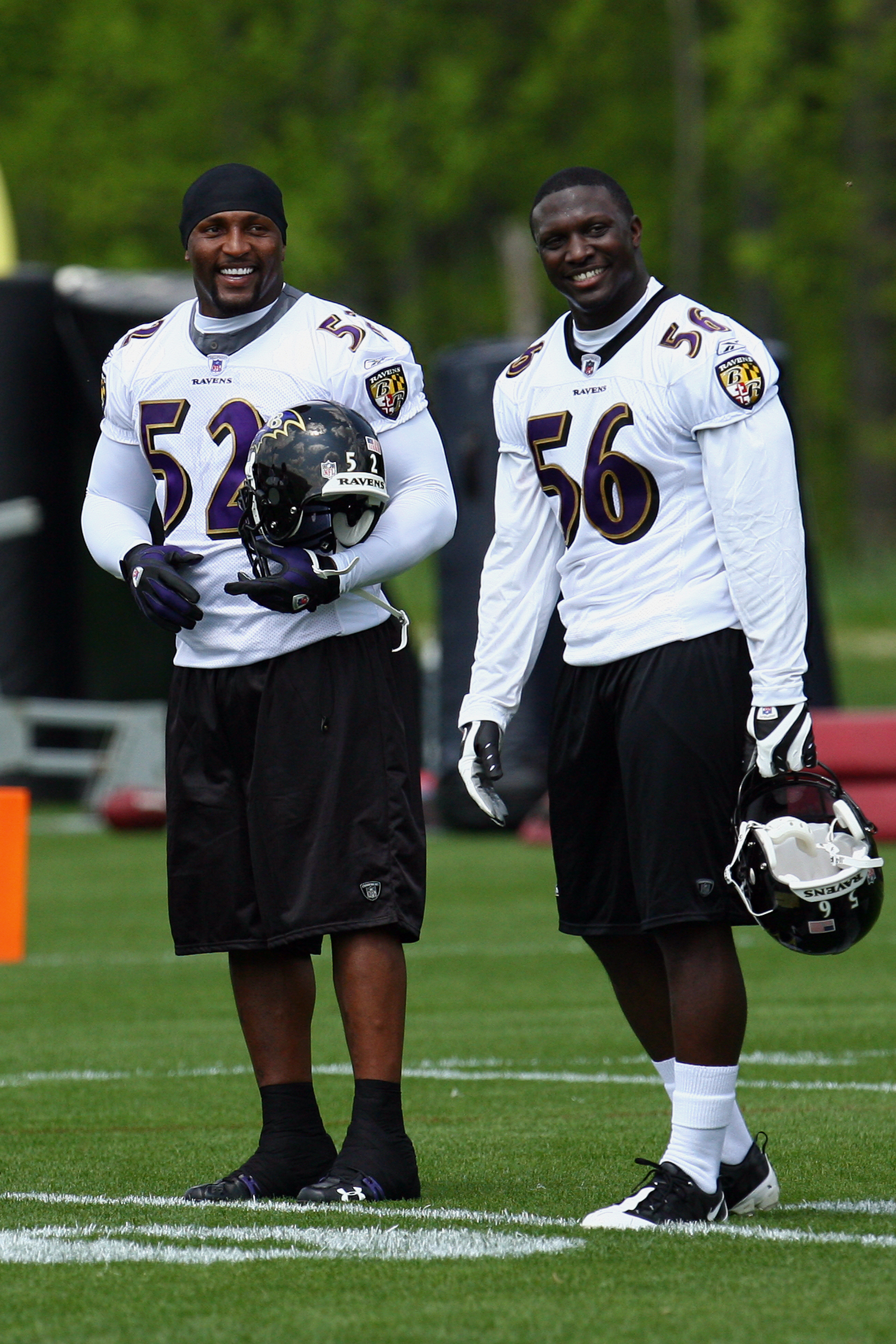 At the beginning of camp, I think the smart money was on Tavares Gooden as the man who would start next to the legendary Ray Lewis.

Coming in to the game against the Redskins, I think the battle is closer between Gooden and McClain than expected.

The Ravens have outstanding depth at the ILB position, and the second starter may remain a question until opening weekend. 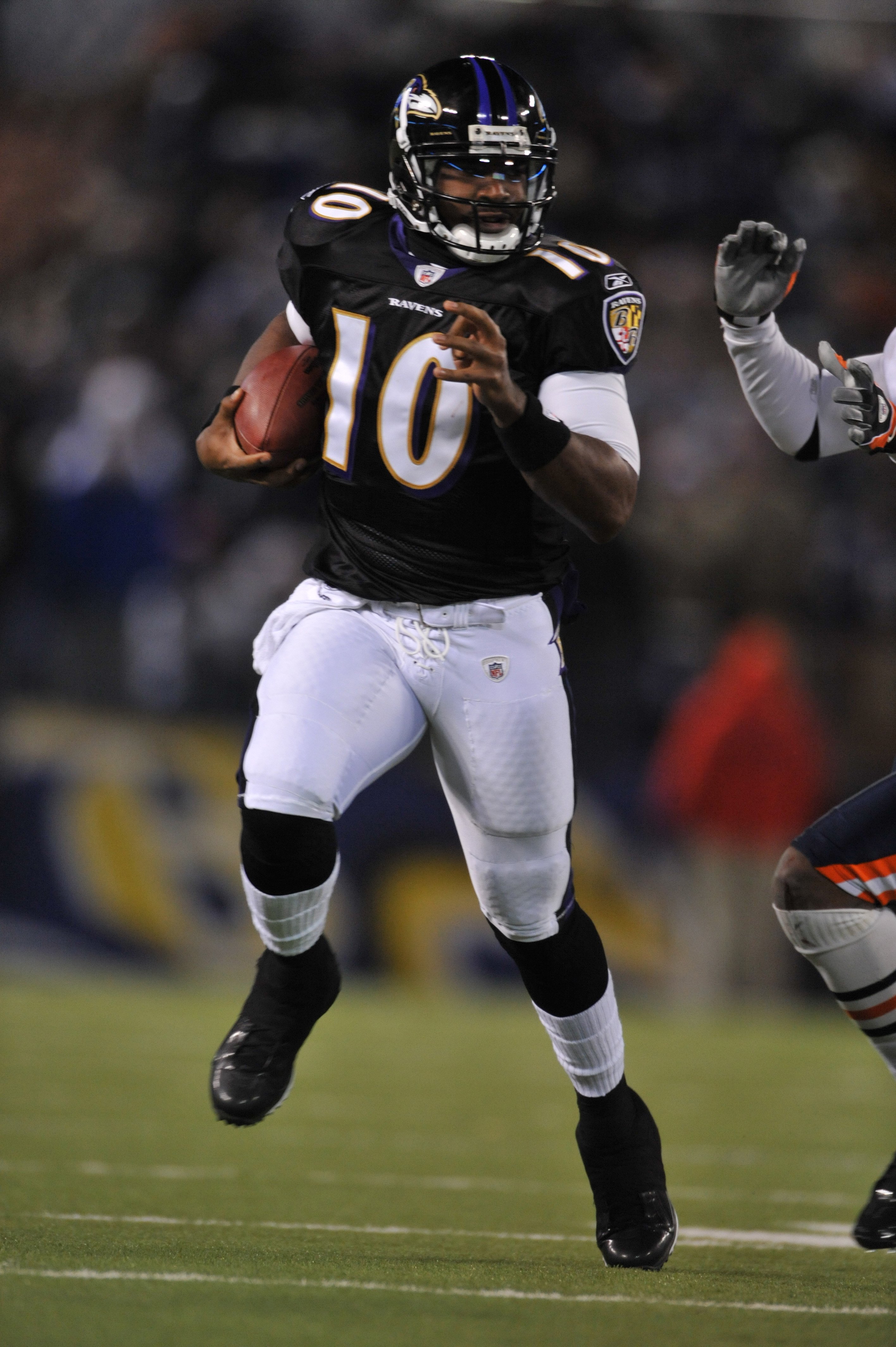 When the Ravens signed Marc Bulger in the offseason to a pretty big contract, it seemed obvious he would back up Flacco.

Troy Smith had expressed a desire for a trade, and I expected he would get that wish, and the Ravens would go with Bulger and John Beck.

After the Beck trade to (coincidentally) the Redskins for CB Doug Dutch, the competition becomes a bit muddier.

Troy Smith is an outstanding athlete, and brings the ability to run a 'wildcat' style offense if he's the second stringer.  Bulger brings experience and is the pocket passer that is a better replacement for Flacco should the need arise.

Neither really impressed in the Panthers game; word out of camp is that Troy Smith has not played well.

Will Bulger create some separation this weekend?  Will Smith show his talent? 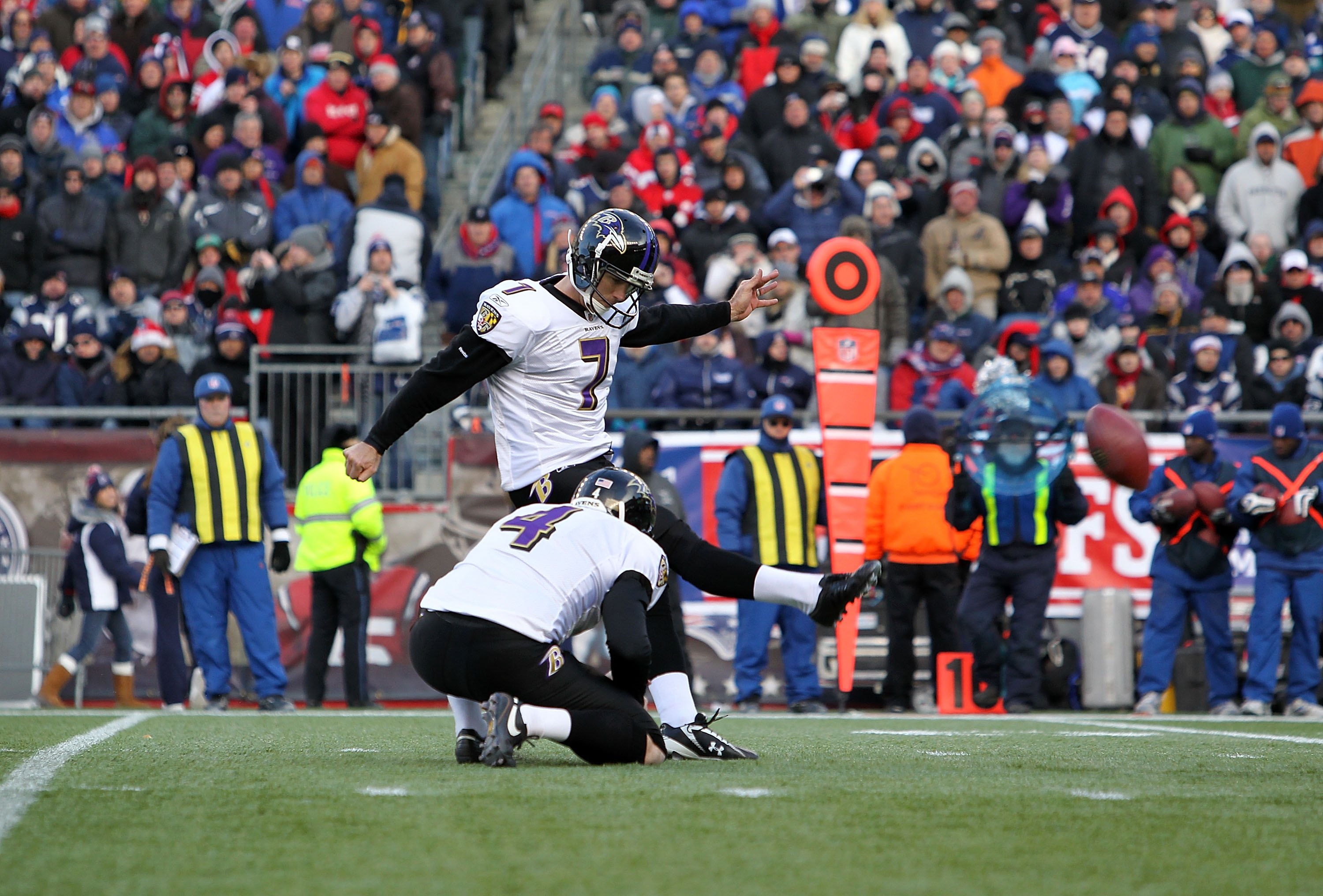 Both looked solid in the Panthers game.  From the sounds of things, Graham has a slight edge right now.

Much like the backup QB battle, which one of the kickers will create some separation in the competition? 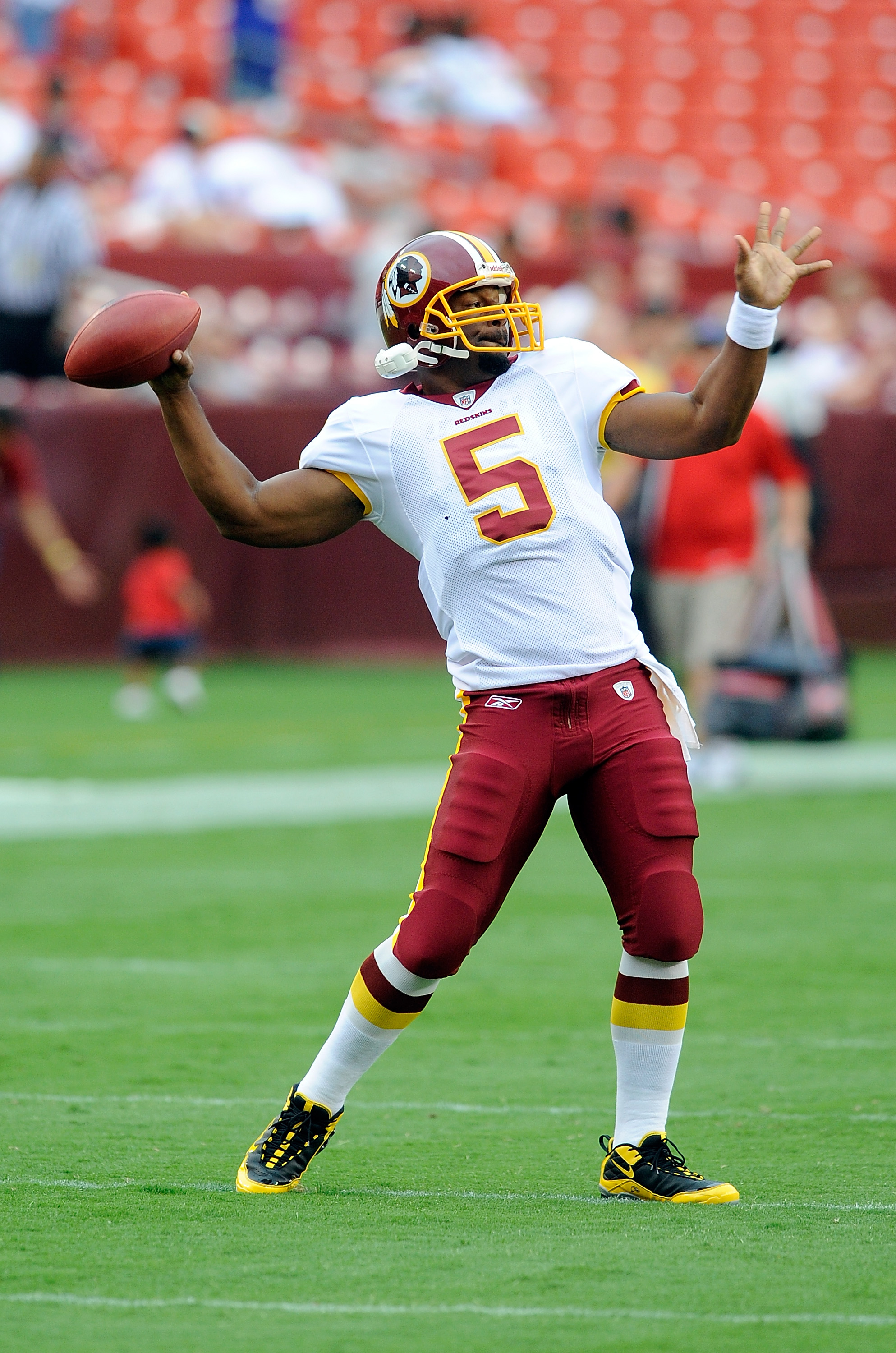 This game isn't all about the Ravens, even for Ravens' fans.

There's the story of Donovan McNabb, and the offseason move from the Eagles to the Redskins.

How well is he fitting in to the system?  How much better will he make the Redskins?  Does he still have what it takes to get into the postseason? 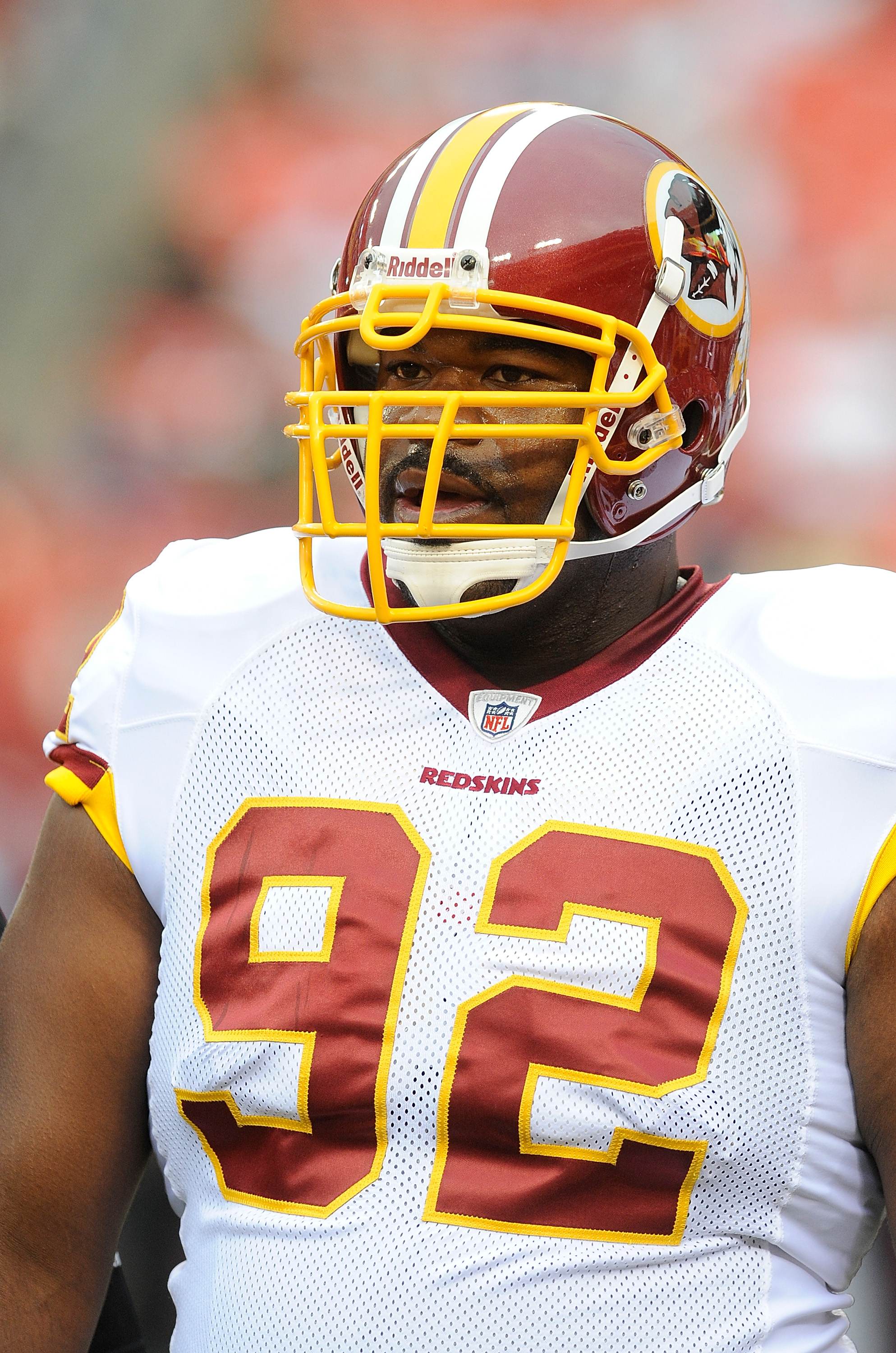 Albert Haynesworth showed up for camp out of shape after suggesting he didn't want to play for the team that is paying him $100 MILLION.

He passed his conditioning test, but has only participated in about a third of all practices, and missed Wednesday and Thursday of this week with either migraines or dehydration, depending on who you ask.

Haynesworth may not even play on Saturday, giving Ma'ake Kemoeatu a chance to shine, and frankly win the starting spot. 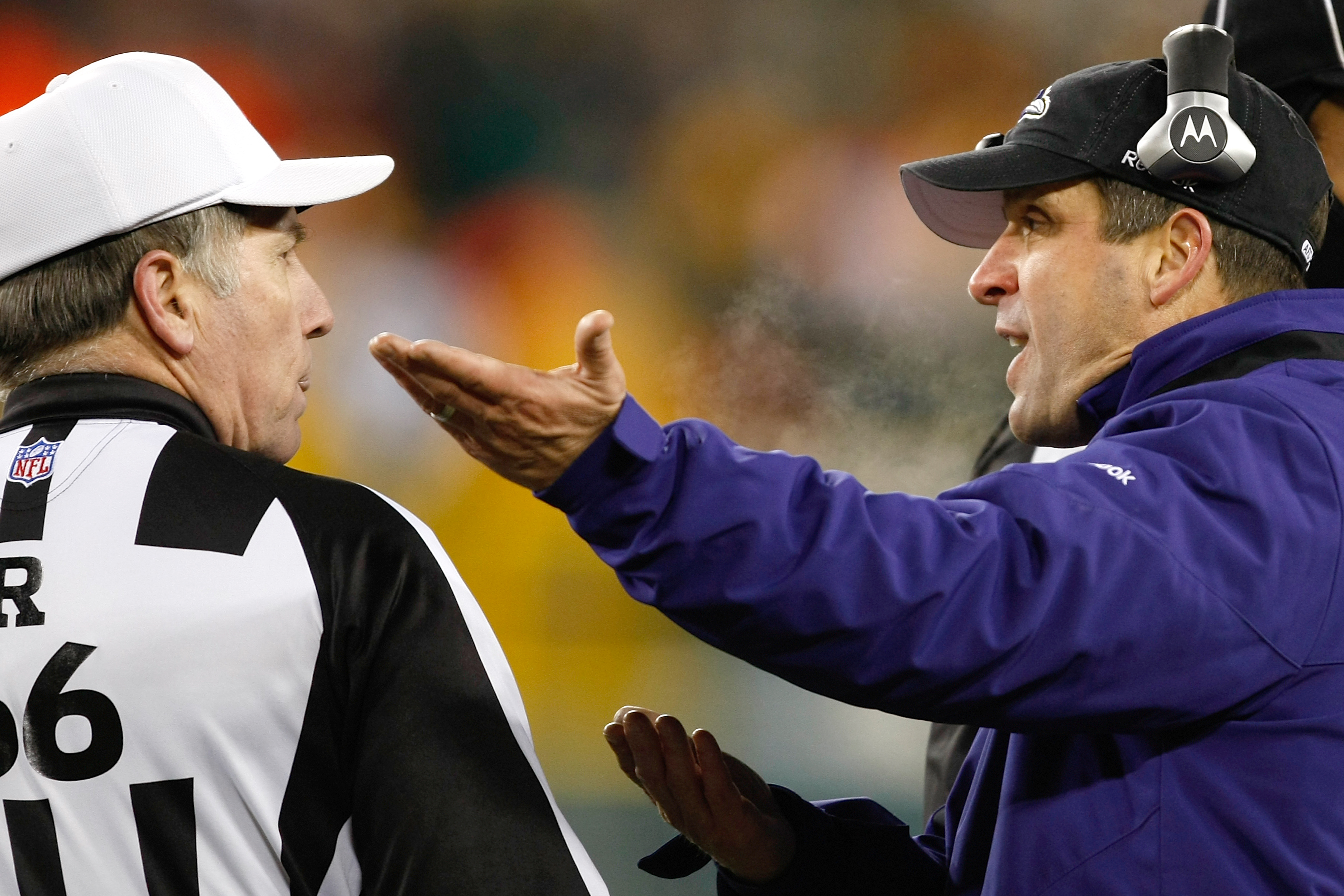 The Ravens came in to camp this year knowing they must reduce penalties if they expect to make a deep run in the playoffs.

Against Carolina, they had 8 penalties for 55 yards.  While that's not horrifying for a preseason game, given how many of the penalties were either false starts or offside, but the concern remains for this team.

Has their discipline improved, or will we see another season of the Ravens looking more like the Raiders? 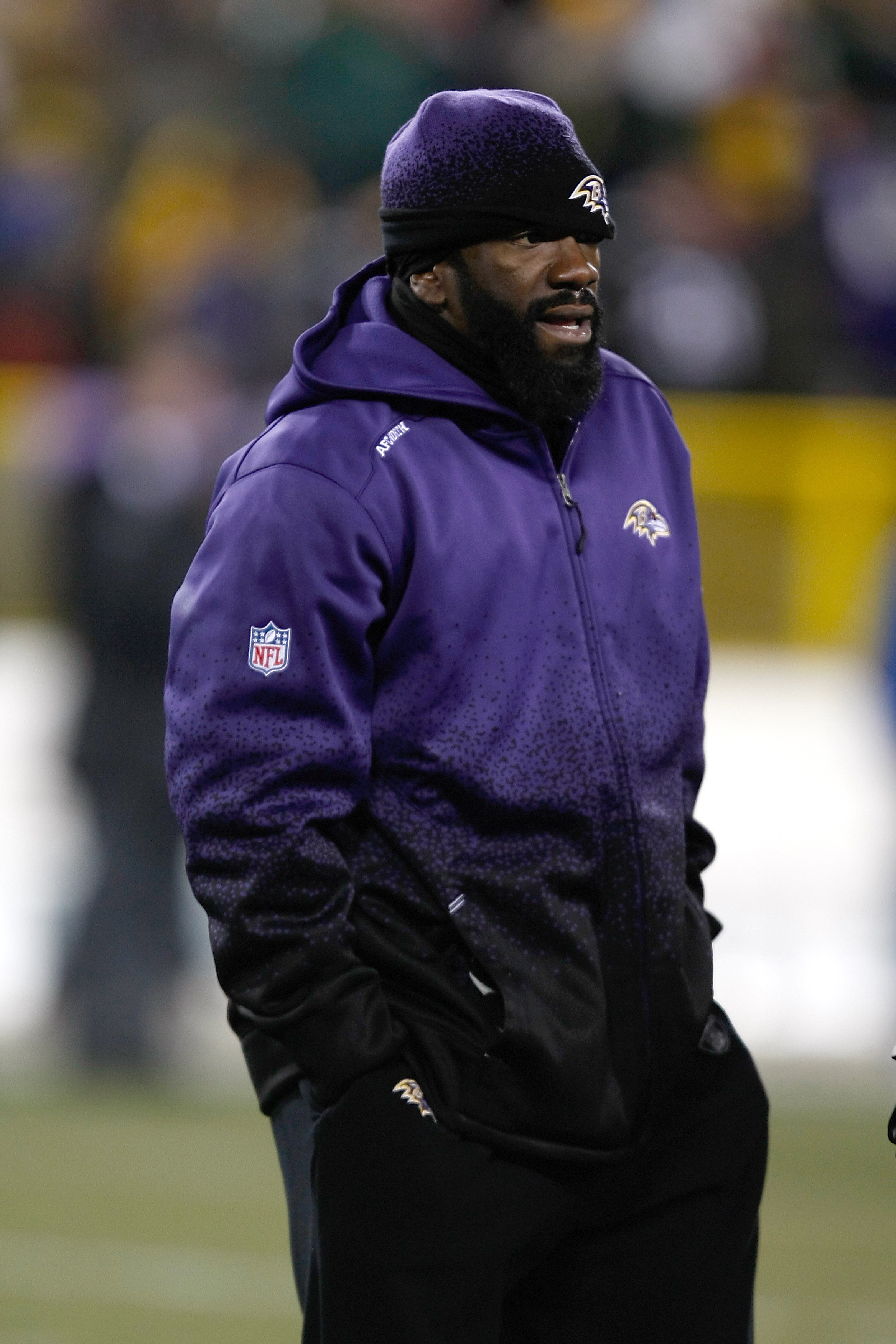 The Ravens have a depleted Secondary and Offensive line, and many players coming back from serious injuries last year.

If they can stay healthy through this game and get a couple of guys back, they will be in great shape for the beginning of the season.

But one or two more key injuries could mean the difference between an 12 win season and a 9 win season.

We'd all rather see the 12 win season.

Likewise, the Redskins can ill afford to lose any players in a game that doesn't count.

So here's hoping both teams come out of this game at least as healthy as they go in. 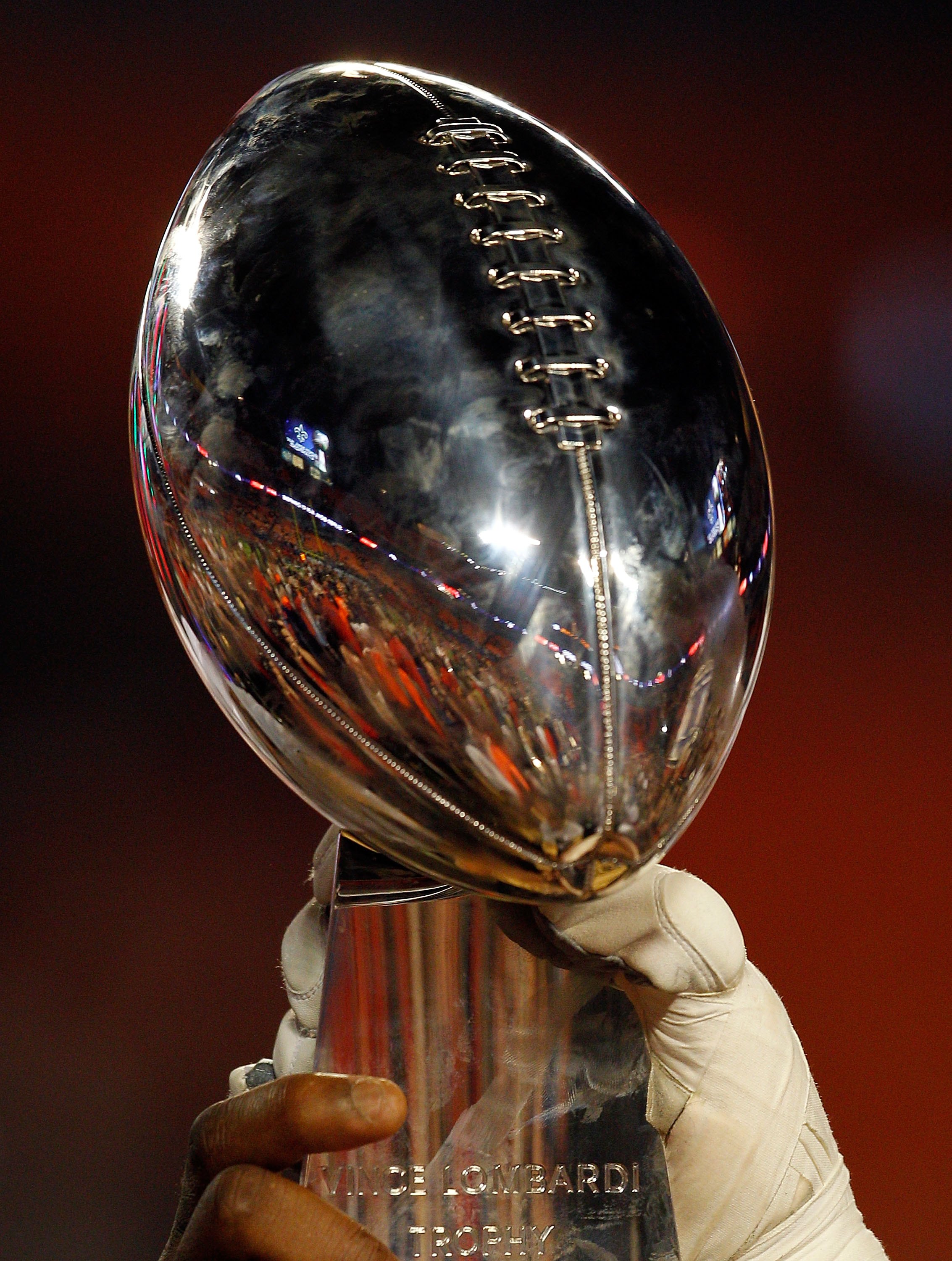 The Ravens have a great shot at winning it all this year.

If the Ravens can sort out the Secondary, get the Offensive Line back to full strength, and keep everyone healthy, this weeks' game against the Redskins will represent one small step towards that goal.

And that's why we watch.