Oakland Raiders Preseason: Reasons For Excitement and Concern in Win 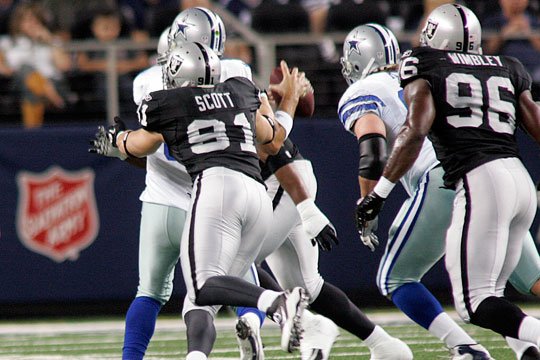 Football is finally back!

This off-season has brought more positive press for the Oakland Raiders than at any time I can remember. Most of it, if not all of it, is well deserved. The Raiders have made up a lot of ground on the rest of the league.

The Raiders kicked off their preseason schedule at the "Jones Mahal" against the Cowboys. They won the game and learned a lot about themselves. There were moments of greatness, and moments of great concern for Raider Nation.

Overall, the Raiders proved that they are a pretty deep team. The second and third string out-played the Cowboys backups fairly handily.

What follows are my observations about who stood out and what aspects of the game still need some serious attention and work.

Let's start with the reasons for excitement... 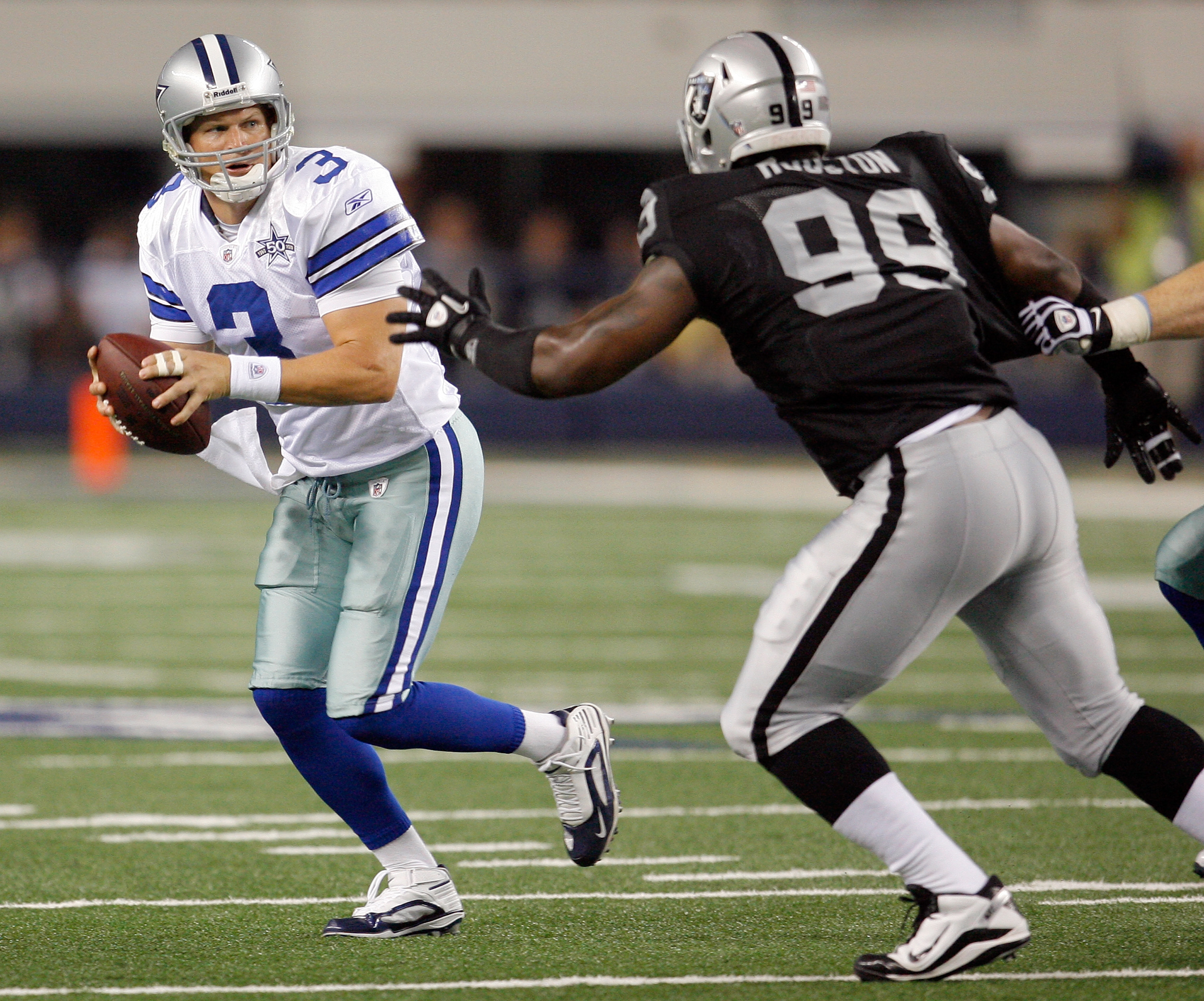 This rookie has been making news in the Raider Nation with his fire and ruthless playing style in camp. Apparently, he's capable of carrying that intensity into game day as well.

Lamarr Houston recorded two sacks against the Dallas starters and held the point of attack very well the rest of the time. It is obvious that Houston is out to prove that he is for real.

I will continue to watch this young player develop and mature. I'm sure Raider Nation will too.

Raider fans all over the world were elated to get rid of "that other guy" and add Jason Campbell to the team.

Campbell didn't have a spectacular day, but he didn't make any mistakes either. He managed the offense, moved the chains fairly well, and didn't turn the ball over. This is the making of a good start for the Raiders new quarterback.

Once he gets comfortable with the new system and his new receivers, Campbell is bound to improve upon his seven of 13, 49 yard performance in Dallas.

Raider Nation is sure to have their collective eyes on Campbell as the preseason progresses. 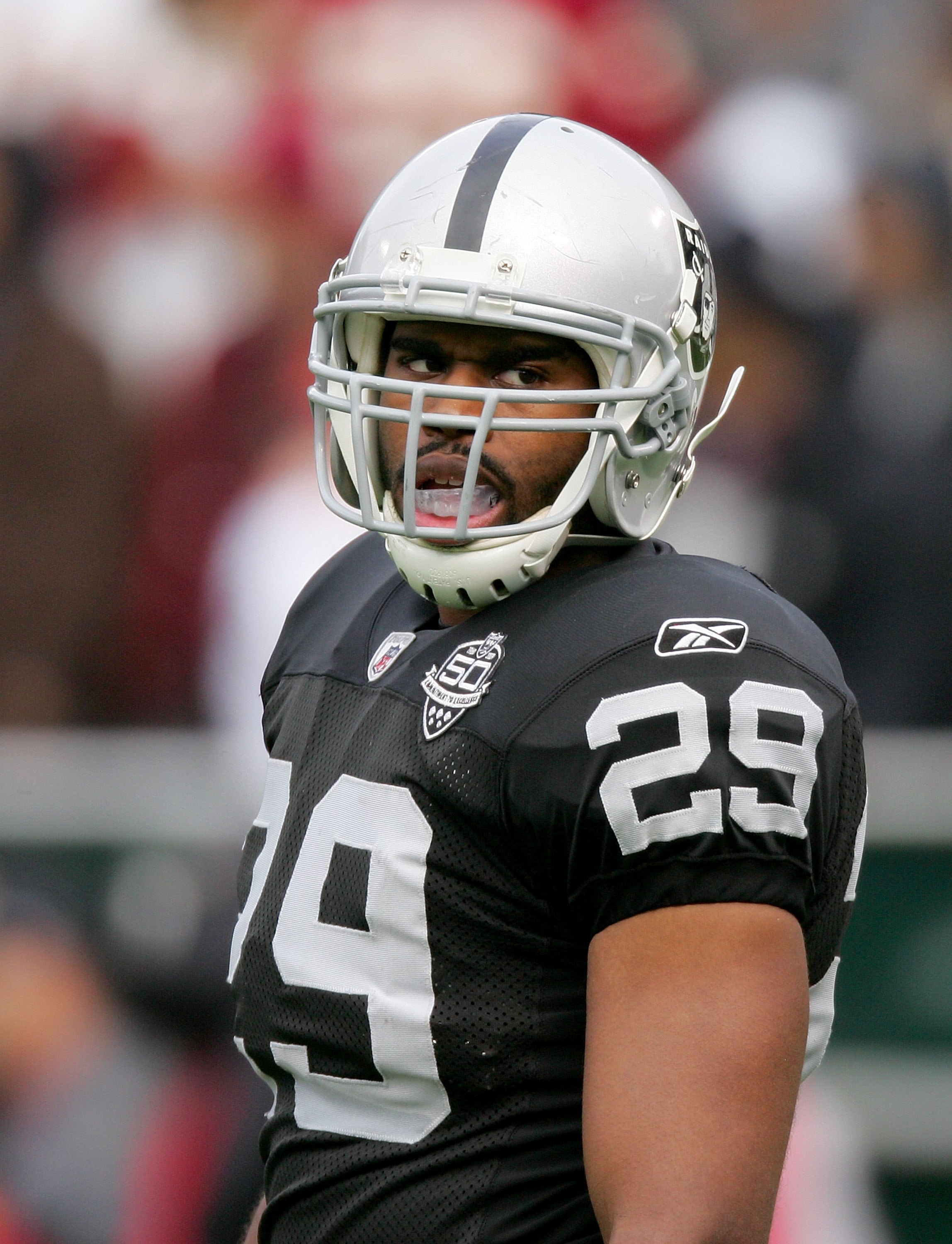 Coming off a season in which he only got 129 carries, Michael Bush ran hard against the Cowboys first team defense. It's almost as if he has something to prove.

Seven carries for 31 yards equals an average of 4.4 yards per carry. I'm sure the Raiders will take that all day long.

Bush looked very solid and finished every run with a desire to move the chains. He delivered more punishment than he received. This is a good sign for Raider fans.

As the regular season approaches, Raider fans should be excited of what Bush can do in Hue Jackson's new power running game. 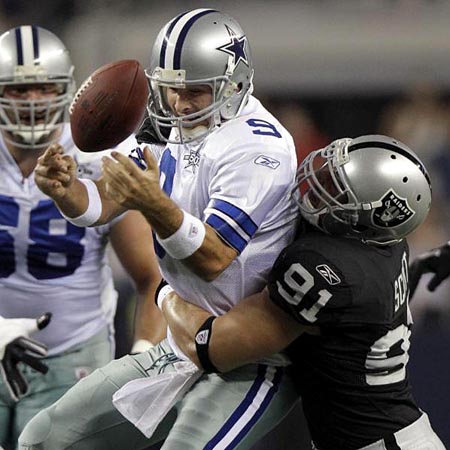 Trevor Scott gets to Romo

Poor tackling fundamentals have been of serious concern for the Raiders over the last several years. Missed tackles and big gains by the opponent on plays that should have stopped at the line have plagued the silver and black.

This issue seems to be getting addressed as there were very few missed tackles by the Raiders on Thursday. Players swarmed to the ball, and the ball carriers were stopped in their tracks consistently. Whatever John Marshall, Mike Haluchak, and Greg Biekert are teaching is soaking in.

Raider fans should watch to see if this trend continues in the coming weeks.

Excitement For The Redzone Defense 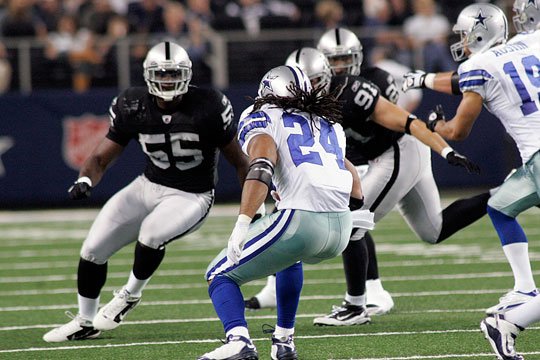 In 2009 the Raider were one of the worst redzone defenses in the league. This is an area head coach Tom Cable specifically targeted in the offseason. It appears to be paying off.

The Cowboys had four opportunities inside the Raider 20 yard line and failed to break the plane on any of them. This, more than any other defensive stat, speaks volumes about the new-look Raider defense.

Assuming this progression continues as it has thus far, the Raiders will have a very stingy redzone defense in 2010.

Raider Nation should be hoping this becomes the norm, rather than an anomaly.

Excitment For The Depth at Key Positions 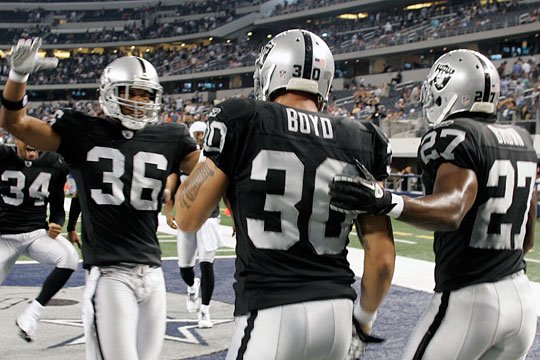 Once Campbell and the first team left the field, the second and third string players got their chance.

Kyle Boller, Nick Miller, Michael Bennett, Yamon Figurs and Johnnie Lee Higgins all looked very good on offense. They moved the ball, scored a touchdown, and won the game for the Raiders in the fourth quarter.

Chris Cooper, Jeremy Ware, Walter McFadden, and Jerome Boyd all looked solid on defense. They picked up right were the starters left off. They put pressure on the Cowboy's quarterback, stopped the run, and kept the Cowboys out of the end zone.

Stevie Brown got an interception, and Boyd made the game clinching interception return for a touchdown. These performances bode well for the future of the Oakland secondary.

If the play of the back ups continues to be as good as it was on Thursday, Raider fans can rest assured that they can step up and play if called upon to do so.

Now, for the concerns...

Concerns On The Offensive Line 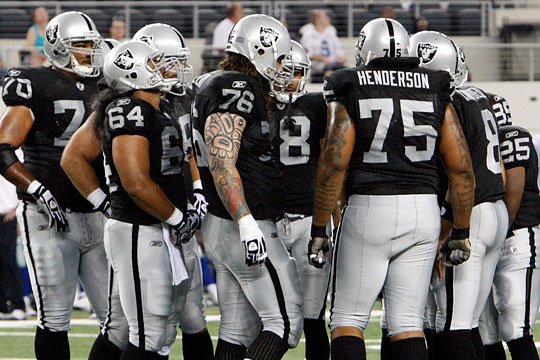 The Raiders offensive line in the huddle on Thursday night

From the start of the game, the Raiders were facing one of the best front sevens in the league. It showed. Jason Campbell had time on some plays, but for the most part, felt the pressure.

The center and guard positions did not play well in pass protection. Sampson Satele and Chris Morris were not able to consistently hold up against the solid Dallas pass rush causing Campbell to eat the turf once and feel pressure regularly.

It wasn't a horrible performance from the offensive line, but there are still some serious concerns heading into the regular season.

Although the offensive line looks improved from last season, that isn't saying much and it must be further improved. 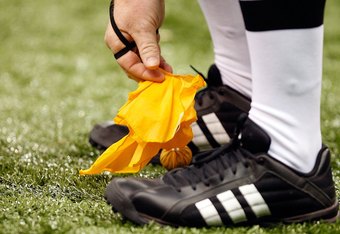 As has been the Raiders' modus operandi, penalties appear to be a continuing problem.

The most penalized team in the NFL over the last 50 years got called for nine penalties for 63 yards. This is an area the Raiders must improve upon if they wish to compete in the 2010 season. Nothing kills a team like turnovers, but penalties are a close second.

I feel like this is more a symptom of it being preseason, rather than an all-out problem for the future. Players are all jacked up to hit some one in a different jersey, they are looking forward to showing what they can do, and sometimes mental discipline falls by the wayside.

I realize that this is the way "Raider football" has been played for decades, but it simply doesn't work in the "new NFL."

Raider fans should pay attention to this problem to determine if it sorts itself out.

Concerns For The Starting Wide Receivers 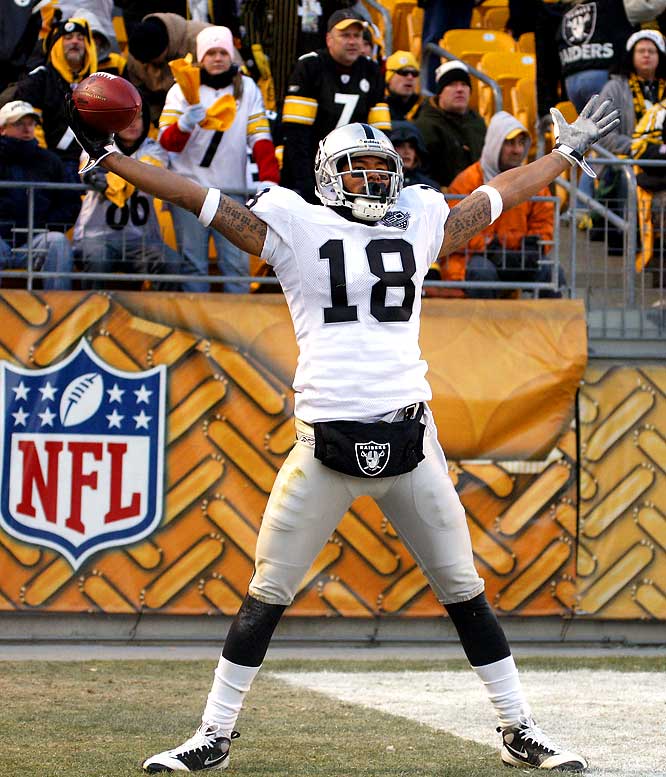 This is a touchy subject among Raider Nation. There is a lot of solid young talent at this position, but as yet it is unrealized.

In Thursday's game, several of the Oakland receivers were virtually unseen. Chaz Schilens didn't even play due to a foot injury, Louis Murphy had but one catch for 14 yards, and Darius Heyward-Bey was completely shut out.

I realize that it's only preseason, and that Schilens is injured. It was also partly due to the offensive line not playing all that well. Campbell didn't get enough time to survey the field and deliver the ball. Murphy's catch was nice, but one catch does not a starter make.

Raider fans should be paying close attention to the starting wide receivers to see if they can pick their game up and shine in the new Raider offense.

Concerns For Poor Third Down Efficiency 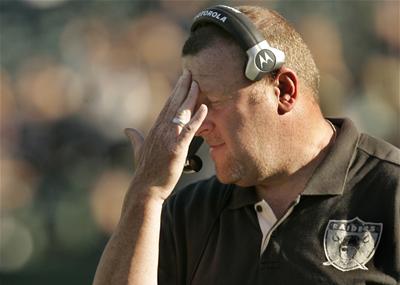 Against the Cowboys, the Raiders converted just two of 12 third down opportunities. This is not conducive to winning on a regular basis.

It seems like this lack of production stems from poor interior offensive line play. The quarterback never really has enough time to read the defense, plant his feet, and throw the ball. Its difficult to know if this is the case, or if it's just due to a lack of game planning in the preseason.

Either way, it must be remedied if the Raiders want to be successful in the regular season. Converting third down opportunities is one of the most important factors in controlling time-of-possession and resting your defense. We all know what failing to control the clock did to the defense in 2009. It wasn't pretty.

Watch for the Raiders to work on third down situations in the coming weeks at training camp. 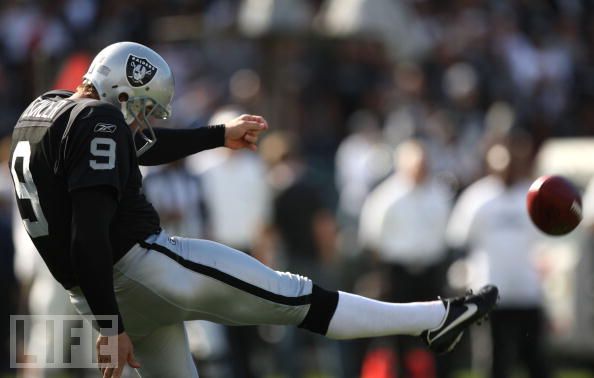 While the Raiders' kick return and kick coverage look to be improved from 2009, the punt coverage hasn't made the same jump.

The Cowboys return man, Bryan McCann returned five punts for 54 yards, including one for 28 yards. That's an average of 10.8 yards per return. Punt return numbers like this give the opponent an advantage in the area of field position.

Sometimes games are won and lost based on this aspect of the game. Not to mention, improving punt coverage will improve the already great numbers on Shane Lechler's resume.

The Raiders have to improve their ability to hem in, and tackle opposing punt returners in the future.

Let's watch the next few games to track the Raiders' progress in punt coverage.

Concerns For Having to Play From Behind 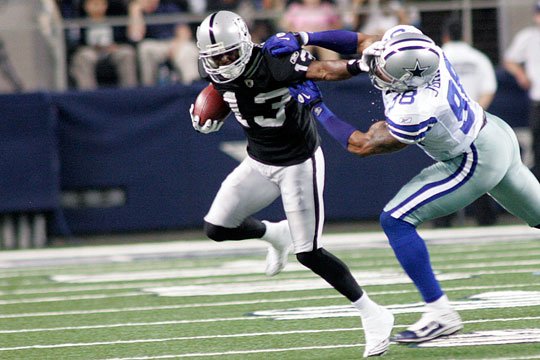 Momentum is a big deal in the NFL. When you have it, you need to keep it. If you lose it, you could lose the game.

There have been a lot of changes in Oakland this offseason. To make all the new players and coaches successful, they must come out strong early on in the course of a game. Take control, take the momentum, and "take it to them!"

The offense started very slow on Thursday and never really got rolling until the back ups were playing in the fourth quarter. The Cowboys didn't get much done on offense either, but most teams will not be so generous.

I'm sure the slow start had a lot to do with new players trying to learn to play together, first game jitters, and a very solid Cowboys defense. Whatever the case, the Raiders have to plow through it and make something happen earlier.

So many new players, new coaches, and a new scheme will make it more difficult to come from behind in the regular season. Therefore, this team has to be productive and get the lead so the defense can bring home the win.

We should see how the Raiders start out on offense to see if this tendency to start slow can be remedied. 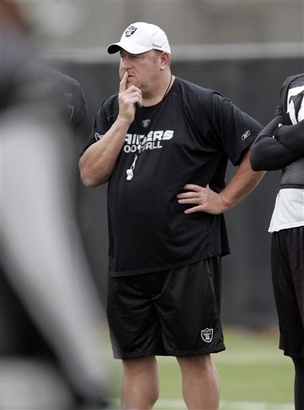 As a Raider fan, I believe the total reasons for excitement outweigh the reasons for concern. As I've laid out, the depth of this team is very good at some key spots, the running game looks solid, the run and redzone defenses, as well as the kick coverage look much improved.

There are also some concerns. The offensive line needs to drastically improve at the guard and center positions, the wide receivers need to get healthy and work on getting open, the team needs to show more discipline, and the they need to improve on third down and start more quickly.

You can add great play from young players like Nick Miller, Jerome Boyd, Mike Mitchell, and Jared Veldheer to the "excitement" category, and chemistry, depth at the offensive line, the coverage skills of the outside linebackers to the "concerns" list.

I hope the excitement supersedes the concern aspects of this team.

What do you think? Am I right on this stuff? What excitement or concern did I forget? Which of these do you feel is most important?