There is no question, the Eagles had a thorough meltdown in their most important game of the regular season with the NFC East title and the No. 2 playoff seed on the line.

Every player and coach shares responsibility for the lopsided loss that was ugly from all possible angles. Flawed game plans, failed execution, uninspired play, etc. were all apt descriptions of the Eagles body of work in Dallas on Sunday.

Nothing escapes scrutiny. Of course, this comes with the territory, especially in possibly the most passionate, knowledgeable and opinionated sports towns in America. Eagles fans (including those who cover the team, but have to cloak their loyalty) are frustrated by the regrettable performance and the dangling carrot being pulled away yet again. And, strong, polarizing opinions help drive up ratings for sports radio hosts, sports writers and bloggers alike.

This brings us to Donovan McNabb—the most successful, but much-maligned Eagles quarterback. From the beginning to the end of Sunday's game, systemic failure in every phase of the team was abundantly clear, yet fans, talk show hosts and sports writers have tended to fixate on McNabb.

His transgressions ranged from overthrowing a 60-yard pass to DeSean Jackson to firing a bullet to the back shoulder of a wide open Jeremy Maclin to his body language on the field to his post game comments. Of course, the discussions involving McNabb typically digress to include indictments on his ability to win big games, his demeanor and his lack of accuracy.

Did McNabb have his best game? No, certainly not, but it would have looked pretty good statistically without the dropped passes, most likely upwards of 70 per cent completion percentage and 300 yards with no interceptions. On the flip side, McNabb did misfire on a couple passes, fumbled a low snap, may have thrown away a couple balls before being sacked and never got the team into the end zone.

Of course, statistics are just that and often do not tell the whole story or can be misleading. However, it is interesting to see that McNabb's numbers would have been almost identical to Tony Romo's (who is being praised) and would have computed to a 97.0 rating. Lets take a closer look at the specific criticisms, though.

Yes, McNabb overthrew Jackson, who was a step or two ahead of the Cowboys defender and would've likely scored a touchdown. He had time and a completion could have been a game changer.

That said, this must be tempered with acknowledgement that the ball was being thrown 60 yards down the field with large, muscle-bound defenders racing in to plant him in the turf. There is a reason that the 2009 NFL average completion percentage for long range throws (26 yards or more) is roughly 25 per cent—it simply is not that simple, even if the guy has a step or two. And, rightfully Jackson gets a great deal of accolades for his array of long scoring plays this season, but lets not forget that this also required McNabb to make some nice reads and throw some pretty passes.

Regarding the pass to Maclin that could have resulted in a large gain, it is true that the ball was thrown to his back shoulder and was a laser. It is a pass, though, that should be caught by an NFL receiver, albeit a rookie.

Overall, Maclin has been a very good addition to the Eagles offense and has a bright future, but it is surely reasonable to expect a first round draft pick to make this play in the final game of the regular season. And, it is interesting that critics deploy a double standard as they argue McNabb should be able to flawlessly handle a low, knuckle ball snap, yet also pin the blame on him for not making a perfect pass to Maclin.

Many critics have taken exception to McNabb's body language and facial expressions during Sunday's one sided contest. As the game wore on and McNabb continued to try to ignite the offense to get them back in the game, players continued to drop passes and make mistakes that thwarted any momentum—and the frustration showed.

This was true of McNabb, and surely Jackson as well. The same critics who took issue here, also praise players like Tom Brady, Peyton Manning and Philip Rivers for similarly animated unhappiness with their teammates when they do not execute. I have no problem with McNabb displaying frustration and would actually like to see him provide some more firm encouragement.

Once again, it is interesting that not a word has been said about Brian Westbrook screaming at his teammates after the lackluster first half—because it was appropriate and needed.

Along similar lines, many jumped on McNabb for "throwing his teammates under the bus" by saying the team showed its youth in the game. First off, he had first taken accountability himself and then was answering this specific question. It was not as if he had introduced this concept on his own, but it is important to note that it appeared that Jackson and Maclin were not playing with the same level of confidence and were possibly even a little rattled.

Jackson is obviously a big part of the Eagles retooled offense and did not have the usual swagger that has propelled him to the Pro Bowl in his second season. Both receivers were looking a little wide eyed, and if the Eagles want any chance to advance, they will need to get their mojo and make plays.

When it comes to post game questioning, it is interesting to note that the media is highly critical of Andy Reid's vague, pat answers to their inquiries. In this case, McNabb provided an honest answer to a direct question that was neither overly harsh or inaccurate.

It is also implied within McNabb's comments that he also takes responsibility as the field general for the team "showing its youth" on Sunday. As the leader, he needs to encourage them, gently or more forcefully, to put any big game jitters aside and play to their full potential.

Think back to a similar scenario in the Eagles first Super Bowl appearance, where the team appeared to be suffering collectively from a major case of stage fright. After finally shedding demons with a huge NFC Championship win over the Cowboys, the same players who were flying around the field making plays two weeks earlier, were now playing not to make a mistake.

I can recall desperately wanting some of the leaders to bark at their teammates to stoke their adrenaline to move them past the nerves and instill the intensity that got them to the game. There was no time to worry about feelings or appearances- the clock was ticking away.

After Sunday's dismantling, many are minimizing the Eagles record and six-game winning streak saying that they played mediocre teams down the stretch and squeaked out some wins.

Conversely, what I saw was McNabb doing some of his best work by more overtly asserting himself as the team leader and shouldering the load to overcome a depleted Eagles defensive unit. More simply put, he led the offense to outscore opponents and make the big plays in the fourth quarter to pull out victories.

Overall, critics want perfection from McNabb, essentially some hybrid Madden Football super hero. They want the best of Brady, Manning, and Brett Favre all combined. Folks, these caliber quarterbacks are few and far between. The three named that are often used as the measuring stick are arguably three of the top 10 in the history of the NFL.

Rather than acknowledge and enjoy that McNabb has been the best and most successful quarterback in the history of the Eagles organization, so many want to find fault with everything he does on and off the field.

Personally, I see the Eagles as fortunate to have McNabb behind center. It is also fortunate that both Reid and Jeffrey Lurie recognize this as well and do not succumb to sentiment to make a change.

Is McNabb perfect? No, of course not, but he has been a huge part of the success that the team has had over the past decade. And, in this age of self promoting athletes and sometimes misguided behavior, I would be remiss not to recognize that McNabb has been a model citizen throughout his career.

Lets put it into perspective. The Eagles have made five of their six NFC Championship games and one of their two Super Bowl appearances under McNabb. In the Super Bowl era, they have a post season record of 9-6 with McNabb versus 5-10 in the 34 years prior to his career beginning. Take away the two years he was injured and did not complete the season, the Eagles have made the NFC title game five out of eight seasons under him.

By my estimation, that is remarkable, especially when considering that most of those seasons he was surrounded by one of the lower echelon receiving corps in the league. And, although they each have one Super Bowl victory, it is worth noting that both Manning and Favre have worse postseason records and career statistics than McNabb. You can look it up.

It is inevitable human nature to view the grass as greener on the other side of the fence. However, it seems clear to me that in this case, the grass is greener on McNabb's side of the fence. I do not know if the Eagles can get everything righted and pull off a dramatic reversal of fortune in Saturday's rematch, but they probably would not even be in this situation if not for McNabb. The team's chances are much better with him behind center.

It sure would be great, and much more of a boost to the Eagles's chances, if instead of piling on as the team heads into the postseason, fans would show McNabb the love.

Why Eagles Should Hire Josh McCown as OC 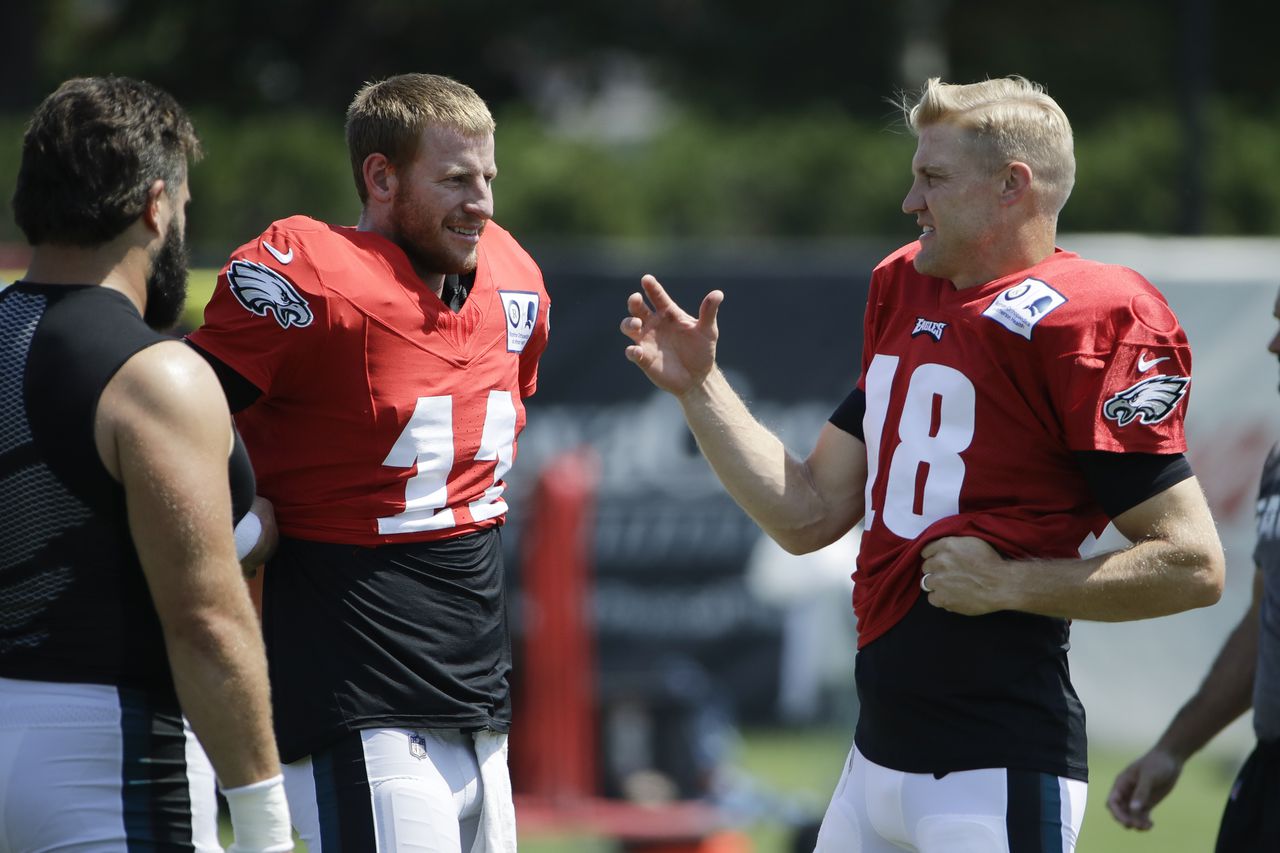 Why Eagles Should Hire Josh McCown as OC