The Knicks allowed a season-low 84 points Monday night in a 93-84 victory over Portland at The Garden.

Larry Hughes scored double figures for the third straight game, and topped 20 points for the second time in as many nights, finishing with 21.

David Lee put in another solid effort for the front court, recording his ninth double-double of the year with 17 points and 10 boards.

The former Florida Gator fell just a minute short of playing 40 minutes for the third consecutive game after averaging less than 33 minutes a game in November. 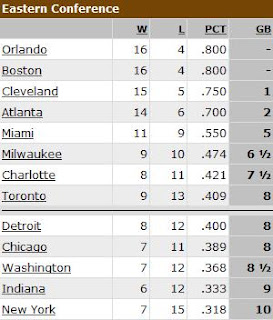 The Knicks are now 3-1 in the second prolonged Robinson benching of the season.  He played just 11 minutes in his last appearance on Dec. 1.  The Knicks won that game as well.

Portland was without many key players, as a rash of injuries have hit everyone from center Greg Oden (out for the season) right down to the coaching staff.

Bench boss Nate McMillan did not make the trip as he was having surgery on a torn patella he suffered in practice.  He took the floor with his squad at Friday's practice due to the lengthy disabled list and lack of available bodies.