As the Utah Jazz prepare to resume their season Thursday, All-Star center Rudy Gobert is doing his best to silence any questions about his relationship with Donovan Mitchell.

Speaking to reporters after Saturday's scrimmage against the Miami Heat, Gobert said "it's time to put it behind" and wants to move forward.

Gobert was the first NBA player to test positive for the coronavirus, on March 11, with Mitchell's positive test result being reported by ESPN's Adrian Wojnarowski the following day.

Per Sports Illustrated's Chris Mannix, Mitchell was "extremely frustrated" with Gobert's cavalier attitude about the virus in the days before his diagnosis.

During a March 9 press conference, Gobert left the podium by touching all of the microphones and recording devices in an attempt at humor.

There didn't appear to be any issues between the two during the Jazz's 101-99 win over the Heat on Saturday.

Mitchell even recreated an infamous LeBron James moment when asked by reporters how many Defensive Player of the Year awards Gobert would win: "Not one, not two, three times!" 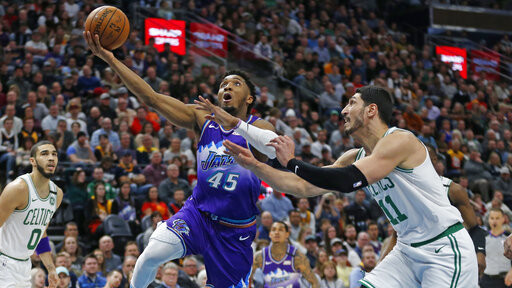 If nothing else, the Jazz need Gobert and Mitchell to coexist for a few months as they pursue a championship. They will play the New Orleans Pelicans in the first game of the season restart Thursday at 6:30 p.m. ET.