Every year, the NBA draft is full of uncertainty and intrigue. This is especially true when there is no consensus top prospect, as Zion Williamson was last year. Perhaps no recent draft has demonstrated this better than the 2017 edition.

With no "safe" prospect at the top three years ago, the Philadelphia 76ers decided to take a chance on Washington's Markelle Fultz. He was traded to the Orlando Magic last February, while players taken after him like Lonzo Ball and Jayson Tatum have become budding NBA stars.

One player who hasn't quite become a star but is emerging as a solid contributor is De'Aaron Fox. The Sacramento Kings point guard is perhaps the most underrated product of the 2017 draft, having averaged an impressive 20.4 points and 6.8 assists this season.

Unsurprisingly, Fox and the Kings could be working on an extension in the not-too-distant horizon.

"The Kings and Fox already have had conversations regarding an extension, according to a league source," James Ham of NBC Sports Bay Area wrote. "There is no word on the specifics, but salary-cap uncertainty due to the pandemic could make things a little crazy."

As Ham noted, there is some financial uncertainty surrounding the NBA right now because of the potential impact of COVID-19 on the salary cap. However, according to John Hollinger and David Aldridge of The Athletic, the league has a plan in place to "smooth" out the cap over the next couple of seasons: 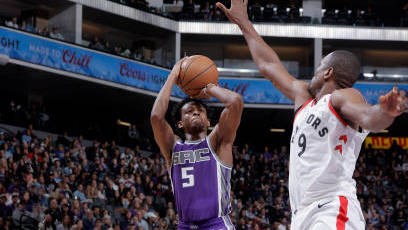 "As far as the actual cap projections, though, teams are not as worried. The expectation is that the NBA will set the cap at roughly the same level as this year—$109 million, with a tax line of $123 million—and separate it from Basketball Related Income, the mechanism by which the split of money between players and teams is achieved, like the league did coming out of the 2011 lockout, and make up any potential difference that arises by increasing the escrow withholding from players."

The reality is that Fox shouldn't stand to lose out on long-term dollars by waiting to sign a contract extension. He'll be eligible for that extension this offseason, and it would be a mild surprise if he doesn't get it.

While Fox has panned out for the Kings, things have been a bit different for 2018 ninth overall pick Kevin Knox. The New York Knicks forward has shown glimpses of promise but little else.

Like a lot of things surrounding the Knicks these days, the future for the 20-year-old is a bit on the cloudy side. According to Shams Charania of The Athletic and Stadium, he is far from a franchise centerpiece for New York.

"Kevin Knox, for whatever reason, has failed to gain traction within the Knicks, and his future could very well be up in the air going into next year," Charania said, via Stadium.

The Knicks are in the process of yet another rebuild and are currently looking for a new head coach. There's a strong possibility that whoever takes the job in New York views Knox as an expendable piece.

While Fox's place in Sacramento is secure, Knox could be on the move sooner than later.

Cleveland Cavaliers forward Kevin Love wasn't acquired through the draft, though the Cavaliers did trade 2014 first overall pick Andrew Wiggins to get him.

Regardless, there has been plenty of uncertainty surrounding Love's future in Cleveland, largely because he hasn't been good enough without LeBron James to make the Cavs relevant.

He is also a 31-year-old on a roster in the middle of a rebuild.

However, the Cavaliers are interested in keeping Love around for the long term, according to Chris Fedor of Cleveland.com:

"While his name remains at the center of trade rumors, the Cavs still want him around, believing he can be a positive influence during this rebuild. And despite two rough years, the Cavs still view him as their best—and most impactful—player. The league sees him in a different way—an oft-injured 31-year-old forward with a bloated contract whose best basketball is in the past and may become unhappy in certain situations."

Love can be a veteran guiding force for young players such as Darius Garland, Collin Sexton and whoever the Cavaliers pick at the top of this year's uncertain draft. For that reason—and the fact that he can still be an offensive force—it makes a lot of sense for the Cavs to let Love play out his four-year contract.