April is usually known as lying season when it comes to the NFL draft. It's a pretty accurate sentiment.

In the past 10 Aprils, I've been lied to a ton—Ronnie Stanley a lock to the Chargers (in 2016), the Giants wanting Dwayne Haskins (in 2019) and the Chiefs trading up for a linebacker (in 2017) are just a few—but you learn over the years who to trust and what information is being handed to you too easily. Or at least you hope so.

With transparency a huge part of what we do in this space every week, we're going to take a look at some of the biggest rumors around the league that are legitimate buzz—no Odell Beckham Jr. to the Minnesota Vikings here—and could impact Round 1 of next week's 2020 NFL draft.

Rumor 1: Georgia's Andrew Thomas the first offensive tackle off the board

This one has gained steam in the last few days, with the idea that Thomas, a starter in the SEC at left tackle, is more pro-ready than his counterparts. In a world rocked by pandemic and with the league facing uncertainty over when training camps or practices will happen, Thomas' NFL traits and readiness are more valuable than the projected ceilings of the other tackle prospects. 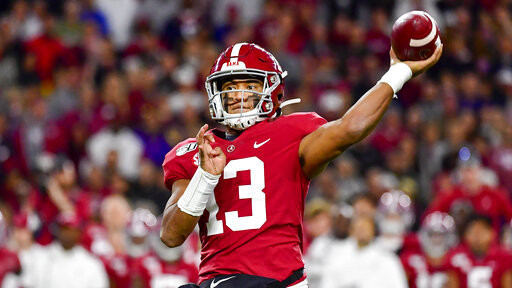 Thomas could absolutely be the first tackle taken given that logic, but it would be a surprise if he's selected over Jedrick Wills (Alabama) or Mekhi Becton (Louisville).

This column might be the leader of the C.J. Henderson fan club, but this one is more difficult to see unless the Carolina Panthers (No. 7 overall) or Jacksonville Jaguars (No. 9) either select Henderson or trade the pick to a cornerback-needy team, such as the Atlanta Falcons. Those are the only realistic scenarios in which Henderson gets into the top 10.

He's valued as my No. 13 overall player in the class and is a big-time prospect at a premium position, but the top 10 might be rich, barring one of the 1994 expansion franchises going all-in on a cornerback.

I believe there is a contingent in the Dolphins front office that likes Justin Herbert over Tua Tagovailoa, but there is growing buzz that Herbert is Miami's man.

Here's a wild theory thrown out this week: What if Miami drafts an offensive tackle at No. 5 and then uses pick Nos. 18 and 26 to trade up for Jordan Love?

It wouldn't be the best value we've ever heard of, and it's a brave move for sure, but if they're not sold on Herbert or Tua, this allows the Dolphins to fill the team's second-biggest hole at left tackle and still get a quarterback of the future.

Rumor 4: Atlanta Falcons and Denver Broncos want to trade up

There is a ton of smoke that these two teams are desperate to get into the top 10—the Falcons for a cornerback or defensive tackle and the Broncos for a wide receiver. It's believable that both teams could want to move up.

The Falcons should call the Jaguars and get to No. 9 for Henderson. The Broncos should trade to No. 10 (Browns) for Jerry Jeudy. Both teams would be instantly better, and the draft capital they'll have to give up wouldn't be that great.

Rumor 5: Tua Tagovailoa falling in Round 1

Fans don't want to hear this, but Tua could absolutely fall in this draft because of injury concerns.

He's QB2 in my rankings and one of my favorite people and players in this class, but a broken hand (plus surgery), two ankle surgeries and the major hip injury are huge question marks that are tough to check off your list of worries when you can't get him in for physicals and have your own doctors evaluate his medicals.

Should Tua fall? No, but he could find himself outside the top 10 perhaps with an Aaron Rodgers- or Teddy Bridgewater-like drop to the end of Round 1 and into what ends up being a better situation for him.

—An important note the week before the draft is the status of players who finished the 2019 season with injuries that must be cleared. Piecing together information from agents and scouts, a few notable updates are below:

*Texas Tech linebacker Jordyn Brooks was cleared by teams after suffering a shoulder injury that cost him the end of the season. He's ready to go and is getting late-first- to early-second-round buzz.

*South Carolina wide receiver Bryan Edwards (foot) is progressing and will be ready to go should there be training camps in June.

*Bryce Hall (CB, Virginia) saw his season ended with a nasty ankle injury, but he's been cleared for football activities.

—Could Ohio State cornerback Jeff Okudah be slipping? There has been buzz in the last week that Florida's Henderson is the preferred top cornerback for some teams, but the belief around the league is Okudah will still be the first cornerback drafted and a top-10 pick.

—There's talk that Boise State offensive tackle Ezra Cleveland will be a first-rounder, something that could happen but in my view should not. Cleveland has a ton of experience and good athleticism, but he lacks the power needed to handle NFL pass-rushers as a rookie starter. He's a fine developmental player, but if a team drafts him in Round 1, I'll be in disagreement with that value.

—The interior offensive line class doesn't get much talk, but there are good starters who will be coming off the board in the late first and early second round. One such starter is Temple's Matt Hennessy, who could be a favorite to reunite with former college head coach Matt Rhule with the Carolina Panthers.

—The race to be TE1 in this year's draft order is heating up. Notre Dame's Cole Kmet has long been thought of as the sure-thing first tight end off the board, but this week I've heard quite a bit of buzz for Dayton's Adam Trautman as the top tight end.

Draft week is always a crazy time, with a ton of content coming out that can be hard to keep track of, so you're getting a handy-dandy schedule posted here that lists where all my content will be next week.

Tune in to our 2020 NFL Draft Show for live, in-depth analysis on what each pick means for your team, with hosts Adam Lefkoe, Matt Miller and Connor Rogers. No fluff, no B.S. Download the B/R app and watch starting Thursday, April 23, at 8 p.m. ET.

A popular theory making its way through NFL circles is that general managers could punt on the 2020 draft, especially in the middle rounds, by attempting to trade those selections for picks in next year's class.

It isn't that the 2021 class is expected to be better, necessarily, but that NFL teams will have a better picture of the players available in a predraft world not affected by a pandemic. It's just a theory thrown out there by teams, but if we see more trade activity than normal in the middle rounds, it's something to keep in mind.

The early portion of Round 1 is expected to be dominated by quarterbacks, offensive tackles and wide receivers, but most league insiders expect the latter half of the round to be equally dominated by linebackers and cornerbacks.

Linebackers Patrick Queen, Kenneth Murray, Zack Baun and Brooks are all projected to be selected between pick Nos. 20 and 40, and at cornerback there is a cluster of players like A.J. Terrell, Jaylon Johnson, Trevon Diggs and Jeff Gladney who are also projected in that same 20-pick range.

The first 15 selections will be dominated by offense, but the last 17 picks of the round could largely be spent on defense.

This might be a deep sleeper for the casual draft fans, but Auburn safety Daniel Thomas is one of the best under-the-radar players in the class after not receiving an invite to the 2020 Senior Bowl and then putting on a decent showing at the NFL Scouting Combine.

What stands out about Thomas isn't his testing times, it's his impact playing in the box for the Tigers defense. In big games against Alabama and other top SEC opponents, he was often the guy who shadowed the quarterback or made big plays in the backfield.

On a defense that will have three linemen drafted, Thomas was often the shining star on defense. Keep his name in your mind on draft weekend and as the season gets here.

Anyone who had Joe Burrow ranked as a first-rounder before the 2019 season is either a psychic or really, really optimistic. Based on 2018 tape, Burrow looked like a late-rounder, and that's where he ranked on my board when the season began.

The hope with Burrow heading into the campaign was that he could build on a strong finish to his 2018 season—notably a win over UCF in a hard-fought bowl game—and develop in an offense that would be modernized by little-known assistant Joe Brady.

Everything clicked for Burrow, with Brady's offense proving to be a perfect fit for him and his cast of pass-catchers, and his stock climbed weekly. Starting with an impressive win over Texas in early September, Burrow dominated every defense on a tough schedule on his way to a record-setting 60 touchdowns and just six interceptions, a Heisman Trophy and a national championship.

Burrow started as a late-rounder, but his tape in 2019 was undeniably good. He's the legitimate best quarterback in the draft.

Grant Delpit entered the season as the No. 3 overall player on my watch list after a dominant 2018 season that showed him primed for a big jump. That jump never happened, though, with Delpit failing to make the same impact in his final season in Baton Rouge.

Some LSU contacts have said Delpit dealt with an ankle injury that affected his play last year, but my issues with his tape are more about effort and pursuit angles. And if the ankle injury was bad enough to affect his play, why are his same missed-tackle problems also on the 2018 tape?

There's a lot to unpack here, including the fact that Delpit is a fantastic athlete with surefire NFL potential if he can get back to playing with the tenacity and speed we saw from his sophomore tape. But on grade alone, he's the biggest faller of this year's draft class, with a drop from No. 3 to No. 63 overall.

1. Stick to Football is live three days per week in the B/R app, with shows every Monday, Wednesday and Thursday at 5 p.m. ET. This week, we talk to Houston head coach Dana Holgorsen, play Cash or Trash with the latest NFL rumors and give you our dream landing spots for the best players in the 2020 class.

How the Raiders Can Shock the NFL

How the Raiders Can Shock the NFL