Bridges had 20 points on 8-of-12 shooting, five assists, five rebounds, three steals and some highlight-reel dunks in Team USA's 20-point win. He helped his side outscore its opponents 44-24 in the third quarter and 80-50 in the second half overall after trailing 81-71 at halftime.

Bridges put on a show in the second half, perhaps never more than on this pass off the backboard to himself a la ex-Orlando Magic forward Tracy McGrady:

He also went coast-to-coast for two following a steal:

Bridges wasn't done yet, though, as he unleashed a windmill dunk in the closing minutes of the game. 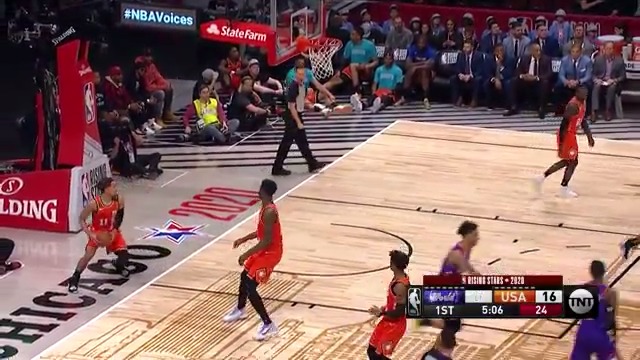 The ex-Michigan State star did more than hold his own personal dunk contest, however, as he amassed three steals and hit 3-of-7 three-pointers.

Bridges brought the house down in the second half after tweeting this at halftime:

The Athletic posted video of Bridges explaining the tweet postgame:

Miles Bridges talks about his halftime tweet tonight but he doesn't think players should be allowed to tweet during halftime... https://t.co/edNx90wyVD

A bet on Bridges would have been quite lucrative. Per B/R Betting, Bridges was listed at 33-1 at Caesars Palace to win the game's MVP award.

Williamson literally tilted the backboard on a second-quarter dunk:

He also teamed up with Morant on a half-court alley-oop as well as this one-handed throwdown:

Williamson put on a 360-degree windmill show at the end of the game, which developed into an unofficial dunk contest. None of the shots went in, but the attempts still got the crowd buzzing regardless:

If only these Zion dunk attempts went in 😦 https://t.co/JecdYK5hPX

It was an off-night for Doncic and the World team for the most part, but the Mavs superstar still provided a moment to remember by casually pulling up behind half-court and nailing a bank shot before halftime:

New York Knicks wing RJ Barrett led the World team with 27 points on 11-of-17 shooting. It was a great effort overall and a solid bounce-back performance after Atlanta Hawks point guard Trae Young hit him with the nutmeg in the early going:

Trae wastes no time breaking out the nutmeg 👀 https://t.co/stjYNqOgj6

Barrett led all scorers and also had 15 at halftime.

Team World and Team USA are now tied at three wins apiece since the Rising Stars Challenge format changed in 2015.

Kevin Durant says he will not play when season resumes in Orlando: 'I don't plan on playing at all'