LOS ANGELES — The Big Blue Empire crumbled in the most stunning of ways: Los Angeles was leading at home, with Dodger Stadium at ear-splitting decibels, six outs away from eliminating the Washington Nationals.

The Empire crumbled in the most expected of ways: Clayton Kershaw, whose postseason ghosts will torment him for the rest of his life, threw six pitches. Two landed for home runs. Then the bullpen—well, namely, Joe Kelly—went into full-on collapse mode.

It was swift, it was horrendously ugly, and it was final: Washington 7, Dodgers 3. Game 5, set, match.

"Everything people say is true right now about the postseason," said Kershaw, whose career postseason numbers now are 9-11 with a 4.43 ERA over 31 appearances, 25 starts. "I understand that. It's a terrible feeling."

Kershaw took full responsibility for this latest dagger. "I let down the guys in this clubhouse," he said. "That's the hardest part every year when you lose the last game of the season. When you're to blame for it.

"It's not fun. It's a terrible feeling. I had one job to do, to get three outs. And I got one, and it cost us the game right there."

It was just six days earlier, before Game 1 of this series, when he so eloquently spoke of the fleeting concept of time in this game, of missed opportunities and the ever-present chance at redemption.

As you might have heard, the Dodgers haven't won since 1988. And following two Miss Congeniality finishes in 2017 (the Houston Astros won) and 2018 (the Boston Red Sox), this juggernaut that won 106 games in the regular season and won the division by a franchise-record 21 games (yes, even the Brooklyn Dodgers never had it that good) was sure it was headed to a third consecutive World Series. It was sure that things would be different this time.

In the clubhouse, there were red eyes and hushed voices. It was as if nobody could believe what had just happened.

"It's tough thinking we're supposed to still be playing," Kenley Jansen said. "You just don't know what to do right now."

The sound of water from the showers slapping the tile floors wafted into the clubhouse. The occasional rip of packing tape closing up boxes to send home pierced the silence.

They had this one.

And then they didn't.

Muncy had ambushed Nationals starter Stephen Strasburg for a two-run homer in the first, and Enrique Hernandez landed another blow by drilling a homer in the second to put the Dodgers up 3-0. Strasburg was fighting his curveball, falling behind hitters, surviving with his fastball and changeup. It wasn't until the fourth that Strasburg finally tamed his curve and it began working for him.

In no small part because of that, the Dodgers, who ripped five hits in the first two innings, managed only two hits the rest of the game. Strasburg, surviving on the guts that some had questioned earlier in his career, departed after six innings with the Nats still trailing 3-0.

Meanwhile, Dodgers starter Walker Buehler was dominant. The Nats didn't touch him until the sixth, when Anthony Rendon yanked a double into left and Juan Soto followed with an RBI single. Buehler regained his balance, finished the inning and then obtained the first two outs in the seventh before leaving with the tying runs aboard at first and second.

Buehler didn't give it a second thought.

"We're home free," he said of what flashed through his mind as he walked off to a roaring, standing ovation from the sellout crowd.

Enter Kershaw, who needed only three pitches to strike out Adam Eaton to end the inning.

Dominant as Kershaw appeared, that's where the trouble started. Because instead of calling for Kenta Maeda to face the heart of the Nationals order in the eighth, manager Dave Roberts sent Kershaw back out.

Roberts explained that he "really liked" Kershaw against the right-handed Rendon, who now, including this Division Series, was 11-for-29 lifetime against Kershaw with five walks, and "with the success that Clayton's had against Soto with the two-run lead, I'll take Clayton any day in that situation."

Soto, against Kershaw, was 0-for-5 with three strikeouts.

"I just think it's one of those [things] where it was easy for me to get Clayton, with the low pitches, to get Rendon and to go out there and get Soto," Roberts said. "And to have Kenta behind him. That was my thought, and not to have Kenta go through Soto."

So it went. Kershaw did keep the ball low to Rendon, but the Nationals' heart and soul slugged the second pitch he saw, a not-far-off-the-ground 89 mph slider, over the left-field fence.

Rendon had barely crossed the plate to make the score 3-2 when Soto attacked the next pitch Kershaw threw with the gusto of a hungry dog. This one was a sloppy, looping 89 mph slider that hung belt-high over the plate. And Kershaw paid.

Well, that's not quite true. There's always room for questions, and Roberts faced several that will last into the winter.

One: Why the over-reliance on Kershaw, who is no longer in his vintage form and maybe should have been excused after blowing away Eaton to end the seventh?

Two: Why didn't Maeda stay longer after cleaning up Kershaw's two-homer mess in the eighth by striking out, in order, Howie Kendrick, Ryan Zimmerman and Yan Gomes?

Three: Why tempt fate by bringing back Kelly after he worked a brilliant 1-2-3 ninth inning? Tenth-Inning Joe Kelly was to ninth-inning Joe Kelly what fool's gold is to the real stuff. And if you do send Kelly out for the 10th, why stay with him after he issued a leadoff walk?

He walked Eaton, surrendered a double to Rendon and, after the Dodgers ordered an intentional walk to Soto, Kendrick crushed a grand slam over the center-field fence.

"I mean, if the blame falls on me, I've got no problem with it," Roberts said when pressed afterward. "I feel that my job is to put guys in the best position to have success, and if it doesn't work out, there's always going to be second-guessing. And I've got no problem wearing the brunt of that. That's OK."

As is increasingly the case in today's game, how many of the pitching moves were the product of a blueprint drawn up by the Dodgers' analytics gurus as opposed to how many were the manager's alone, it is impossible to say. Roberts said his eyes told him that Kelly was so dominant in the ninth inning that he was comfortable leaving the right-hander in for the fatal 10th.

Among those left out on this night were lefty specialist Adam Kolarek, veteran Pedro Baez and whiz-kid rookie Dustin May.

At his locker, Muncy sat alone in his chair, staring at the floor. Lefty Rich Hill made the rounds, quietly saying goodbye to each player. Bench coach Bob Geren passed through saying his goodbyes.

This was a team that led the NL with a +273 run differential, their pitchers led the majors in ERA (3.37), WHIP (1.10), opponents' on-base percentage (.282) and opponents' slugging percentage (.379). Offensively, their hitters slugged an NL-record 279 home runs this summer. They dominated everybody for six months.

And then poof. Gone.

"This one stings," said Cody Bellinger, who probably will be named as the NL MVP in November.

Someone asked Buehler how stunning this night was.

"I'm not going to talk about that s--t right now," Buehler said, ever the brash kid who takes on all comers.

What the Dodgers would have none of is blaming their future Hall of Famer, their ace, their organizational rock, Kershaw. Even if he insisted on shouldering all of the blame himself.

Hill's voice trailed off as the lump in his throat grew. Tears filled his eyes. He choked up. He took a minute, maybe longer, to compose himself.

"Ultimate respect," Hill said, continuing, of Kershaw. "This means so much to everyone in this locker room. That's the tough part.

"People say it's just a game. It's a lot more than that."

As the stunned Dodgers said their goodbyes and prepared to scatter into the winter, that much was clear.

Someone asked Kershaw how long it would take him to flush away this heartbreaker of an evening and move on.

"And it feels really bad to be in the middle of it tonight." 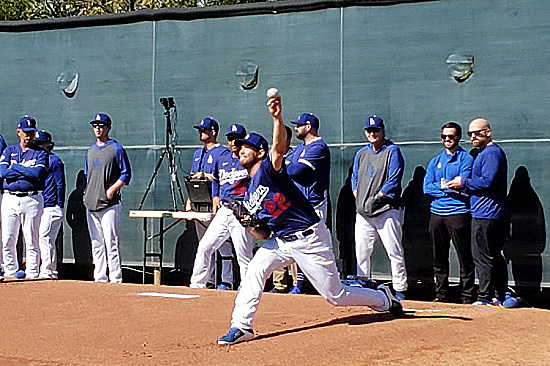