Barca's reserve team, Barcelona B, has a new home: the Estadi Johan Cruyff. Going back as far as 1982, the team used to play its home games at the Mini Estadi, a 15,000-seater stadium across the street from the Camp Nou that will be demolished later in October.

The newly minted Estadi Johan Cruyff is situated on the outskirts of the city in Sant Joan Despi, a bland suburb sprinkled with industrial parks. The club's Sant Joan Despi sports complex is the base for Barcelona's training facilities and La Masia, the club's famed youth academy and residences, which relocated there in 2011.

The image of Cruyff—possibly the club's most iconic figure, even above the celestial Leo Messi, because of the impact his teachings have had on Barcelona and the game generally—is everywhere around the stadium.

There are, for example, murals of the Dream Team he managed from 1988 to 1996 and of Cruyff in legendary poses (scoring a famous kung fu-kick goal against Atletico Madrid, sitting on a ball in his training gear), as well some of his famous epigrams, which have become part of Barca's ideology: "I would prefer to win 5-4 than 1-0" and "Football is a game you play with your brain."

There are murals, too, of the club's most famous recent stars: Messi, Xavi Hernandez and the unforgettable image of Andres Iniesta swinging his jersey in delirium after scoring the injury-time goal against Chelsea at Stamford Bridge that secured Barca's place in the 2009 UEFA Champions League final—and also resulted in a spike in Barcelona's birth rate nine months later.

The memory of Messi, Xavi and Iniesta, who each played a couple of seasons with Barcelona B as young players on the way up, still lingers among the thoughts of the older fans gathered in the Johan Cruyff stadium to watch Barcelona B's most recent home match, a league game against Atletico Levante.

Throwback to Lionel Messi's Barcelona B debut at the age of 16. Source: @fcbarcelona It's #KamPThrowbackThursday guys! #KSC #SFS https://t.co/T5QVjs9FrA

Alex Molins Vila, 46, has been going to watch Barcelona B games since he was a nine-year-old back in 1983. The team's results aren't important, he says. It doesn't matter if the team wins or loses. A good season is not if the team wins its division but fails to provide a player for the club's first-team squad; better to finish mid-table and provide a few players for the senior ranks.

The great joy for Molins Vila is when he gets to spot a young player before he fully flowers.

"There is nothing to beat when you see a player you really like—in my case, a Xavi or Iniesta—and you're sure that they will triumph in the first team," says Molins Vila. "And you explain to your friends: 'Hey, last Sunday I saw this kid playing with Barca B. A guy called Iniesta. He's fantastic. You gotta see him.'

"Afterwards, when he makes it to the first team, and the world discovers him, you can know that you noticed him four or five years beforehand. You've seen him play loads of times since he was in the club's under-age teams. It's very satisfying—very few people have enjoyed this era of the player because very few people go to Barca B's games. For the majority of the public, he's an unknown until he makes it to the first-team squad."

Of Barcelona's present first-team squad, 10 of the 24 players are homegrown. Seven of them have spent time playing with Barcelona B: reserve goalkeeper Inaki Pena, Sergio Busquets, Moussa Wague, Carles Alena, Messi, Carles Perez and Sergi Roberto, who played more than 100 league games for Barca B, more than any other current Barca star.

Two more La Masia graduates, Gerard Pique and Jordi Alba, never played with Barcelona B because they left the club—for Manchester United and local Catalan club Cornella, respectively—before making it on to Barcelona's reserve team. Both returned after several years away.

The squad's 10th homegrown player, 16-year-old sensation Ansu Fati, jumped straight from the youth ranks into the first team without ever appearing for Barcelona B when he made his La Liga debut against Real Betis in August.

The game against Atletico Levante—the reserve team of Levante, a rival of Barca's in Spain's premier division—is only Barcelona B's third time playing at the Johan Cruyff stadium. When I ask one of the security guards on the way into the ground if there will be many Barca ultras at the game, he laughs derisively.

"There might be about 10 or 12 hardcore fans cheering the team, but they'll leave at half-time to go to a bar nearby," he says. "There's no matchday culture yet because the stadium is so new."

Molins Vila, who goes to 80 per cent of Barcelona B's matches, clarifies that there's no grupo de animacion (hardcore fans) who support Barcelona B. There used to be a grupito (a little group) of about 20 at the old Mini Estadi, but no such fans come out to watch the games at the Estadi Johan Cruyff.

The matchday attendance is impressive, however: more than 3,000 people, a high turnout which Molins Vila attributes to "the novelty factor" of it being a new stadium. The attendance figures will revert to the old mean next season, he reckons.

At Barcelona B games at the old Mini Estadi, only about 500 to 1,000 fans used to turn up. Although when the team played in the second division (they were relegated to Spain's third tier in 2018), glamour ties against big, historic clubs such as Real Zaragoza or Deportivo La Coruna attracted larger crowds.

The atmosphere is unmistakably family-oriented. Fathers and mothers trundle into the ground holding the hands of their young sons and daughters. During the game, the odd parent can be seen scuttling around the terraces after wayward toddlers. I pass one boy—about eight years old—who is bouncing a ball. I'm not sure they'd let you into the Camp Nou carrying your own football.

There are a lot of emigrants attending, too. Some of them tell me it's too expensive to go regularly to the Camp Nou for first-team games. You can get a ticket to a Barcelona B game for €9. Ecuadorian Alex Yagual, who has been living in Barcelona for 20 years, has come along with his nine-year-old son, who plays with Cornella, and some friends.

When the players run out on to the pitch before kick-off, there is a polite smattering of applause. During the match, there is no coordinated singing—except a few short, abortive "Barca! Barca!" chants. There is the odd racist haranguing of Barca B left-back Sergio Akieme from fans when he loses possession. They call him "El Negro" (The Black Guy).

When club staff circumnavigate the perimeter of the pitch chucking free Barcelona T-shirts into the crowd, it probably generates the most animated movement from the fans all evening—except for the two goals scored by Barcelona in the 2-0 victory. Groups of children trail around after them in pursuit of the freebies.

"I'm not a Barca fan—I'm a Messi fan," Katty, a young supporter from the Dominican Republic, cheerfully tells me as she parades around the terraces largely oblivious to the match unfolding in the background behind herself and her three friends.

Katty (second from the left) with her friendsRichard Fitzpatrick

Robert Cros, 63, plays the role of the playfully disgruntled fan to a tee, providing a running commentary to proceedings. He's part of a group of about 12 fans from the Badalona penya (supporters' club) called Barcelonista Pep Ventura, who take their name from the 19th-century Catalan composer who devised the modern Sardana (a choreographed dance famous in Catalonia).

They watch the game close to the halfway line. They're one of the only penyes—along with some Ecuadorians who sport a large Ecuador flag—to bring along banners, which they've unfurled along the hoardings.

Cros is disillusioned with Ernesto Valverde's handling of the first team: "He doesn't have the personality to manage those players. The heavyweights in the dressing room rule the roost. He's the mentality of a coach of a minor team, not a great club like Barcelona."

Cros goes to all manner of Barcelona matches, supporting some of the club's other sports teams like their hockey, handball and basketball teams. His €800-per-year membership ticket affords access to all the club's home games.

One of the shortcomings of the new Johan Cruyff stadium is that multi-sports fans like Cros can no longer hop from one game to the next because of its remote location. Last season, for example, a Barcelona B fan could watch a game at 6 p.m. in the old Mini Estadi and cross the street to watch, say, a Barcelona basketball game in the Palau Blaugrana (which is in the same complex as the Camp Nou stadium) at 8 p.m.

That is no longer possible.

The sun settles during the game so it finishes under floodlights, decorated by a cheeky goal from Alex Collado in the final minute of normal time. The goal, which became a viral sensation, came at the end of a mazy run through several defenders that brought everyone to their feet. "What a goal. ¡Un escandelo! An outrage," screams Javier, who is at the game with his 12-year-old son.

💥 How's that for some #MondayMotivation? What a goal from Barcelona B's Alex Collado 👏 🔵🔴 @FCBarcelona https://t.co/uv9pGqXubO

The sight of Collado, whom Molins Vila tips to possibly make it as a first-team player along with Puig, scoring that wondergoal in the flesh makes the trip out to see Barcelona B worthwhile. It might be something I can tell my friends about in years to come if Collado turns into a crack. 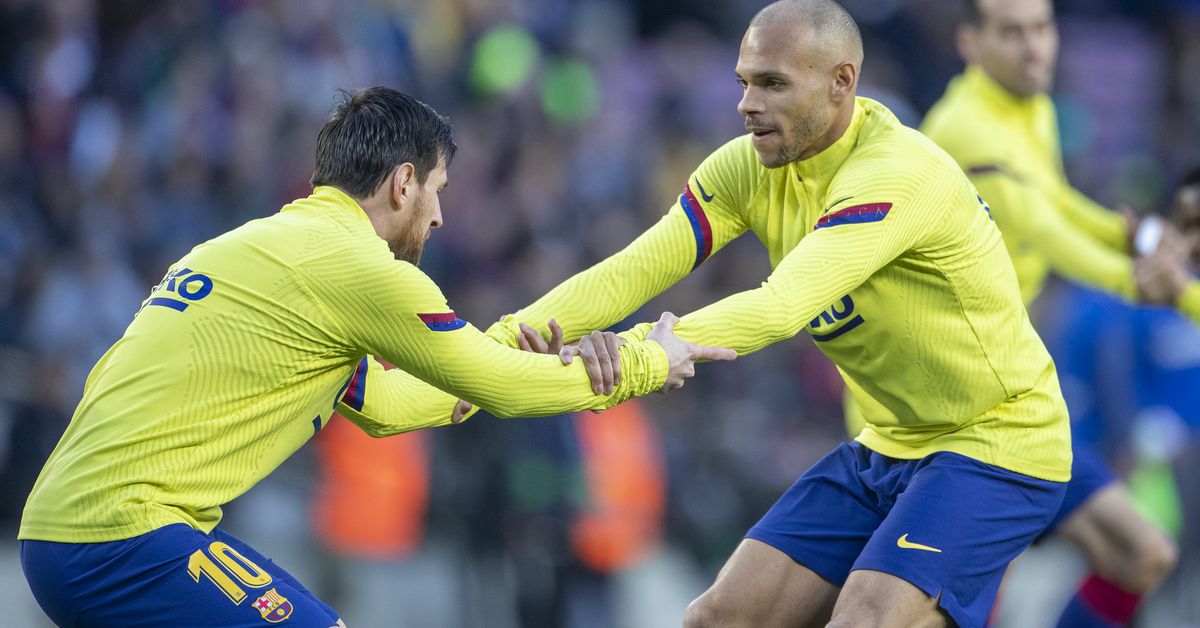 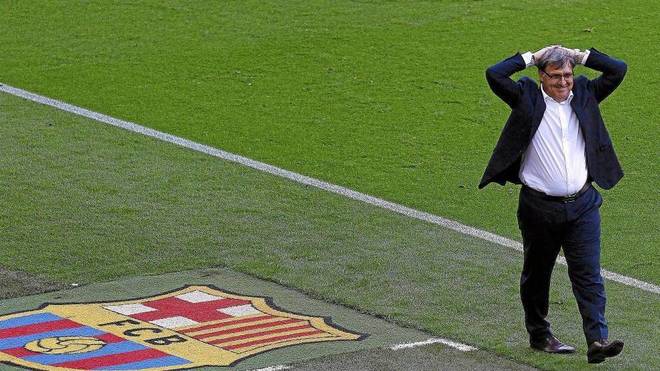