It took the full first half, but the avalanche finally came.

The Warriors scratched out a victory with an impressive comeback effort in the second half against the Trail Blazers in Game 2. And the play that spearheaded their 114-111 win, particularly down the stretch, was the Stephen Curry-Draymond Green pick-and-roll.

The offense stagnated in the first half, and it reminded you why the Warriors aren't better without Kevin Durant. Their beautiful motion offense can put extreme pressure on a defense, which requires equal parts mental focus to combat. The Blazers are fully aware of it.

"They move around a lot quicker, they know they have to be sharper as a team when they don't have [Durant] on the floor," Blazers guard Seth Curry told Bleacher Report. "A lot of times when he's on the floor, they run one action. Steph gets the matchup he wants, Klay gets the open shot, whatever. If not, they end up throwing it to KD and he goes to work. Without KD on the floor, they have to work harder without the ball. Steph will come off three, four screens, Klay comes off more screens, so you gotta be locked in, all five guys for longer periods of the shot clock."

Without Durant, the Blazers don't have it all that much easier. Though the game breaks down and isolation KD is a more reconcilable outcome for both the Warriors and their opponent, the Curry-Green pick-and-roll is still the most unsolvable puzzle in the NBA—six years after it first befuddled defenses.

The Trail Blazers came into Game 2 with a better defensive game plan. Rather than dropping their big defender the way they did in Game 1, forcing Curry to beat them with the long ball (whoops), coach Terry Stotts had his big press up to the three-point line to force a more contested look on Warriors' high pick-and-roll.

Pretty significant difference in where the Blazers big was showing out to on Steph PnR. Game 1 left, game 2 right https://t.co/6XMO4q5Tlg

Pressing up does make life harder on Curry as a pull-up shooter, though he still got up 14 threes and scored 37 points. But the trade-off is allowing Green to attack in four-on-three situations, where his skill set and basketball IQ shine. Pick your poison.

"It's what you see them do all the time," Damian Lillard said. "It's not different than anything they have always done. When they got Draymond with the ball in his hands and Steph and Klay moving around, coming off those screens, you got to go the ball because those guys shoot so well and once Draymond gets it, somebody has to step up, and he's great about making the next play."

The Splash Brothers always get the credit, but Green unlocks the Warriors offense just as well. The Warriors patented pick-and-roll threat highlights his ability to make split-second decisions with the ball and attack downhill at full speed, which is critical to sustaining the Warriors' offensive success without Kevin Durant on the floor.

"He's a big part of the team as far as playmaking," Blazers wing Rodney Hood told B/R. "He knows those guys [Curry and Thompson] get a lot of attention. He's good at throwing the lob and skip pass. Our attention is still going to be on Steph and Klay coming off the ball screen, but I think he does a great job of reading the floor."

"He just makes the simple play," Seth Curry added. "When he's got an advantage, he throws it to the open man. It's pretty simple. Nothing too crazy. Steph gets it out of his hands quickly when he gets trapped, and [Green] either lays it up or hits the open man."

Green's plays may seem simple, but it's a big responsibility—the success of perhaps the best team of all time hinges on it. Other teams can't execute to this level because their roll man isn't as good.

"Just trying to take what the defense gives me," Green said. "They're really committing two to Steph, which means there's a four-on-three on the backside. They're putting a guy on Klay's body, so at that point, there's a three-on-two on the backside. Just try to take whatever's there and make the right read."

Curry's earth-shattering off-the-dribble three-point shooting is no secret. If you allow him to attack you one-on-one, you're toast, as evidenced by game one. So, down the stretch, the game bogs down, and the motion offense that makes the Warriors special isn't always available to them, they need someone to create efficient offense when Curry gets doubled. Without Durant, the ultimate bailout, the Warriors turn to the Curry-Green high pick-and-roll time and time again. If it ain't broke. 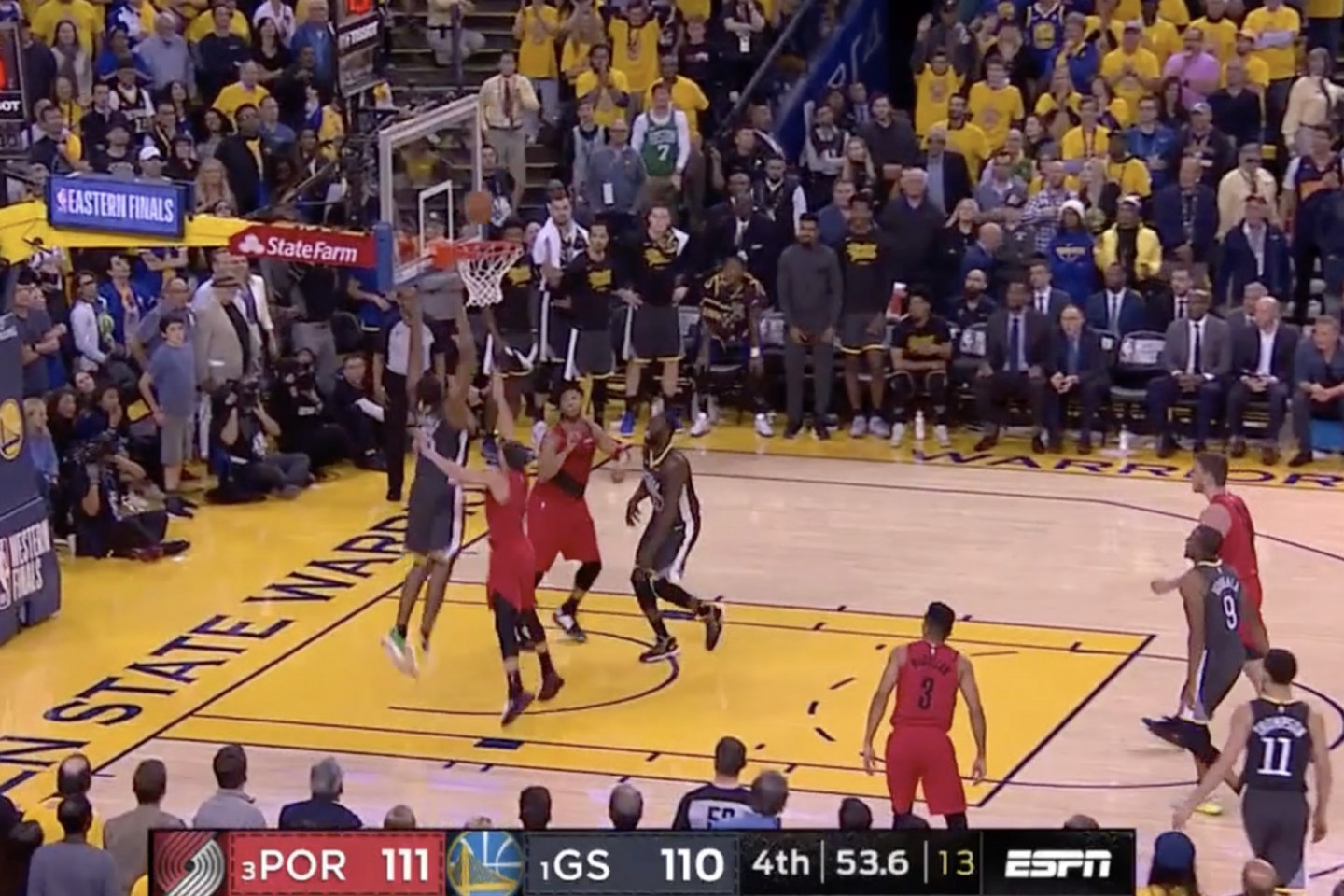 "One thing Coach [Steve Kerr] told me during the game, 'Draymond, they're taking the lob away; you might just be able to get all the way to the basket.' Once I started coming out with the mindset of attacking and looking like I was going to attack, then you force the defender to make a decision."

The Trail Blazers are left with an impossible decision: let Curry torch you or help high and let Green pick you apart down a man. Good luck.