The Tennessee Titans organization can't rely on Marcus Mariota. For all of the quarterback's natural ability and athleticism, he hasn't stayed healthy—which severely hampers his and the Titans' long-term potential.

Mariota left Saturday's 25-16 victory over the Washington Redskins during the second quarter after being slung to the ground by defensive lineman Jonathan Allen. The team designated the quarterback's injury as a stinger, according to Jim Wyatt of the Titans official site.

Another injury. Another disappointment. So much hope rested on Mariota's hampered shoulder, yet the Titans don't have any indication the 2015 second overall pick can withstand the physical demands necessary from the game's most important position.

To make matters worse—for Mariota, this is—Blaine Gabbert came into the game with the Titans trailing 10-6 and led them to a victory that kept their playoff hopes alive.

"It's huge. That's why [Gabbert] is here," head coach Mike Vrabel told reporters after the game. "That's his job to be ready, to go and prepare like a starter, and if his opportunity comes, to make the most of it." 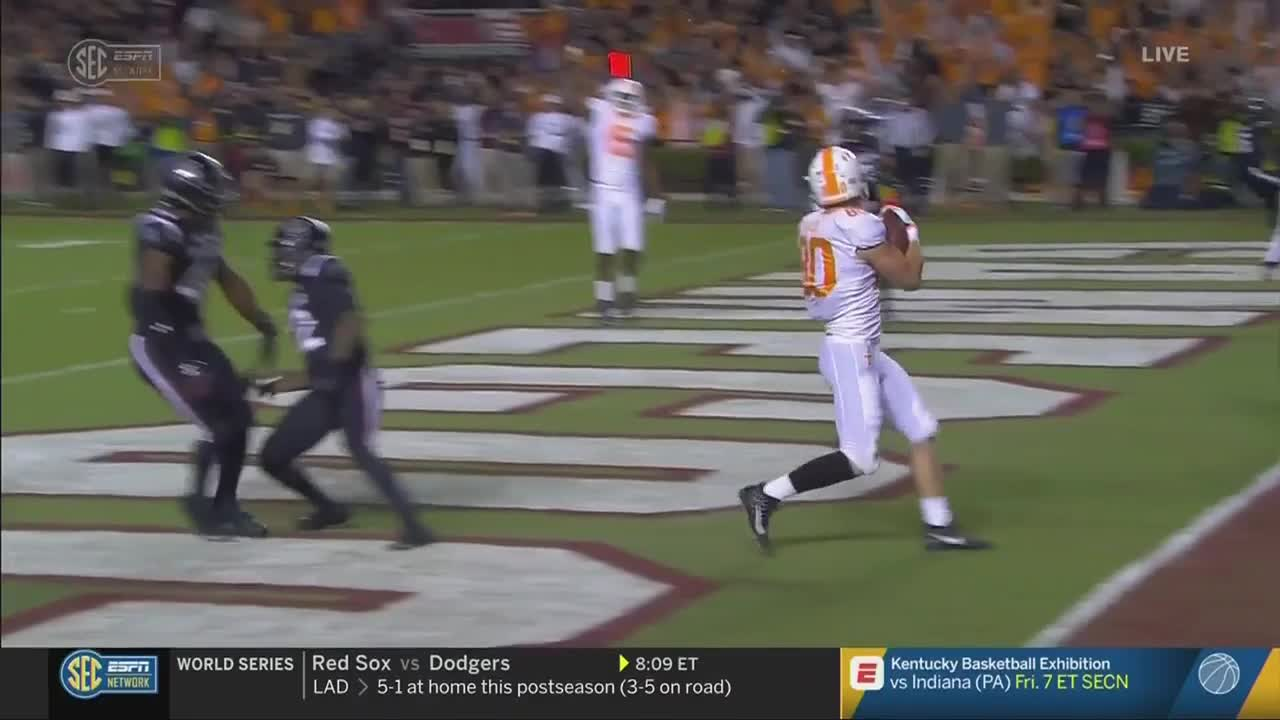 Any difference between the two quarterbacks didn't even register. Mariota completed 10 of 13 passes for 110 yards, while Gabbert completed seven of 11 for 101 yards and the game-winning touchdown pass.

To make something crystal clear, Gabbert isn't the Titans' solution. He's a failed first-round pick with a rather extensive history of average-to-subpar play. His performance does say something about the state of the franchise, though.

The Titans aren't built around the quarterback position. Tennessee's best chance of winning each week depends on a smashmouth offensive approach behind a physically imposing offensive line and running back. Derrick Henry has developed into a true workhorse with 71 carries for 492 yards and seven touchdowns over the last three weeks.

To compete on a consistent basis with a ball-control offense, a team needs to have a stout defense. The Titans were tied for first overall in points allowed per game with 18.1 before improving their average by allowing just 16 points to Washington.

Essentially, the Titans franchise resides in no man's land where the postseason remains a possibility but a legitimate Super Bowl run is far-fetched.

Teams need quality quarterback play to consistently win. The Titans haven't received that even when Mariota has been healthy this season. The front office must decide whether the 25-year-old quarterback is worthy of a $20.9 million fifth-year option on his rookie contract—also taking into account the possibility of not being in a position to significantly upgrade the position this offseason.

There is no good solution to this quarterback conundrum.

Mariota's injury history could be the driving force behind any long-term planning. Vrabel wouldn't elaborate on the quarterback's status after the game and didn't mention if it's related to his previous elbow injury, according to ESPN.com's Turron Davenport.

Nearly every player suffers stingers at some point. But a stinger is more concerning when it happens to a quarterback who suffered nerve damage in his elbow earlier in the season, didn't start two games afterward and may have lingering issues in his throwing arm.

"The way that they explained it to me is like when you strum a guitar string; when that string settles down, that's similar to how my nerve is," Mariota said after sitting out Tennessee's Week 2 contest against the Houston Texans, per the Tennessean's Erik Bacharach. "My nerve has kind of been strummed, so it's going to take it's time to settle down."

Peyton Manning finished his career after suffering nerve damage in his neck and without being able to feel his fingertips, but he was in his late 30s. The Indianapolis Colts' Andrew Luck considered retirement during his recovery from a significant shoulder injury. These kind of injuries aren't to be taken lightly.

Mariota's current status is merely a part of a much bigger picture.

Since entering the league, the native Hawaiian had his rookie season ended by an MCL sprain. The quarterback fractured his right fibula during his sophomore campaign. He dealt with nagging hamstring and knee issues during the 2017 season. In total, Mariota has missed seven games in four seasons, yet the severity of those injuries is far worse than the missed-game total indicates.

When an organization has to hold its collective breath every time its quarterback takes a hit, the team's brass should question whether he's the right person to lead the team. Talent and respect are wonderful traits to have at the quarterback position, but those two qualities mean next to nothing if reliability isn't factored into the equation.

The Titans quarterback hasn't exactly lit the world on fire when he's been on the field. He's provided a 24-to-23 touchdown-to-interception ratio over his last 29 regular-season games. His development from spread phenom hasn't gone according to plan even when the staff attempted to build the scheme around his unique skill set. Instead, offensive coordinator Matt LaFleur went a different route in recent weeks, leaning on his exceptional running back to get the team's offense back on track.

A franchise quarterback is supposed to elevate the play of those around him. Mariota hasn't. He still needs to show he's more than a product of a system, especially if the Titans are going to make a significant investment in him.

"We're excited to have him around here for the next couple of years, and hopefully after the next season we can start to figure something out to keep him around even longer," general manager Jon Robinson said after revealing the Titans planned to pick up Mariota's fifth-year option, per the Tennessean's Jason Wolf.

Robinson may want to rethink those plans and consider alternatives. First, the general manager should ask himself an important question: Is Mariota the right quarterback to lead the Titans? The answer used to be obvious, but it's not anymore.

The Titans can pursue a veteran in free agency at a lesser price to replace Mariota and/or serve as a bridge for another prospect. Teddy Bridgewater, Tyrod Taylor, Joe Flacco (once released) and Nick Foles (after the Eagles turn down his 2019 option) are starting options. The organization could then double-down by drafting another quarterback to develop.

Neither Robinson nor Vrabel is tied to Mariota. This regime didn't draft him. No reason can be given for them not to consider every available option in search of overall improvement.

If Mariota's season ends prematurely again due to an injury, the Titans' plans for him should as well.