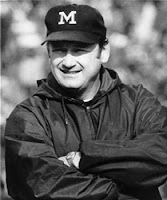 November 17, 2006: The morning began with anticipation since it was the eve before the only No. 1 vs No. 2 game in the storied rivalry between Michigan and Ohio State.

I had just made the road trip with some friends and my son to watch Michigan beat Indiana at IU the weekend before. I thought Michigan had a good chance to win but was worried about the new grass and of course with the game being in Columbus.

Still, it was a beautiful sunny fall day and I was heading to meet some clients for a one o'clock meeting. Before I left I checked Brian Cook's blog at Mgoblog to get any last updates before the big game.

Brian has just gotten a report that Bo had again collapsed at the local Detroit ABC station just like he had done a couple of weeks before. I will never forget Brian's last words on his post.

I got into the car not too worried, since Bo had done this before and had always gotten through it. I turned on the radio to listen to some national radio for views on the game. Jim Rome was talking about in the NFL, when he got the news brief that legendary Michigan coach Bo Schemblecher had died of a heart attack.

I was stunned. But why? I knew he had collapsed and I also knew he wasn't in good health. Why was I surprised?

I also was taking this very personally. Bo was not a relative, he was a Michigan football coach that I thought ran the ball way too much in his final years of coaching. Why did this have such an effect on me? Why now before the most important rivalry game that he helped build with Woody?

I started thinking about my interactions with Bo. I had met Bo a couple of times, he was always nice and had something nice to say for the few seconds I had with him. The last time I saw him was in the Michigan golf course parking lot maybe five or six years before he died. I was putting on my shoes and Bo walked by my car. I said hello and he said hello and Go Blue.

One of my fondest memories of Bo has to do with the play on the right hand side bar of the blog. A good friend of mine ran the MDen at Briarwood mall for many years. Bo would often come to the MDen for book signings. So my friend Dave got to spend a lot of time with him.

I had always loved the play on the right, not for the long last second touchdown pass the AC to win the game but the play before. Having the Michigan running back throw the ball out of bounds, right to Lee Corso was one of the funniest plays I had ever seen. He was trying to stop the clock and knew he couldn't make it to the sideline, so he threw the ball right to Lee, who was IU's head coach at the time. I'm sure they changed the rule that next year.

Dave had taken in a laminated front page of the Ann Arbor News that I had on the day Bo had retired (December 14th, 1989) into work with him on one of the book signing days. Bo signed it for him. It reads; To Bob - The Designer of the Lawrence Reid Pitch Play. Go Blue! Bo Schembechler. (I'm taking that in today to get framed)

It's funny how someone like that passing has an affect on you. I first called my wife, who was in a store dressing room. She thought I was kidding her. I then started calling friends at work (Michigan and non-Michigan fans) to let them know what had happened. To this day, I'm not sure what moved me to do that.

I thought about the game and how Bo had such an impact on it. How could Michigan play to it's fullest ability knowing about him passing? After the news of Bo the game didn't seem as important as it had just a few minutes before. But the game must go on and Michigan and Ohio State played an epic battle with OSU winning the shoot out.

What did I learn that day? I learned that people can have an impact on your life no matter if you know them like a brother or maybe you have never met them. Bo had an impact on me and probably every other Michigan fan as well.

I will bet Bo is looking down at the current Wolverines thinking. Damn! We pass way too much and what the hell is wrong with our defense?! Go Blue Bo! (and as Lloyd Carr elegantly put it) may "The Michigan Man" rest in peace.

BTW: I hope your leveling the playing field up there with all the ND fans! :-)