The one question I'm asked most by readers, Twitter followers and prospective writers is, "How do you break down NFL prospects?"

It is also one of the toughest questions to answer in a tweet or quick email exchange.

Each position requires different criteria for scouting, but the method of scouting remains the same. Tape study, background checks and pre-draft workouts are all a part of the puzzle that makes up a player's scouting report. But what goes into a deeper study of each position and each player at that position?

Want to see the other breakdowns? Check them out below.

When scouting most positions, scheme is of the utmost importance. It's important to know what type of defense the player will be in, and what the requirements are of those different defenses. Not only are there variations between a 3-4 and 4-3 defense, but differences among the different types of schemes within those alignments.

3-4 Defense MIKE: The "MIKE" name stands for "middle linebacker," but in a 3-4 defense it's used to designate the central point of the defense. Even in a 3-4 defense, with two inside linebackers, one player is always called out as the MIKE by the offense.

It used to be, and in some schemes still is, that the MIKE linebacker would be more athletic, a little smaller and a better sideline-to-sideline player. With the evolution of the 3-4 defense, it's more common now to see both inside linebackers in the mold of the former MIKE 'backer standards. The San Francisco 49ers run a double-MIKE defense with Patrick Willis and NaVorro Bowman.

4-3 Defense MIKE: A base 4-3 defense has a middle linebacker set up behind and between the defensive tackles. This "MIKE" linebacker is the captain of the defense and the anchor for the unit. He must be strong, fast and instinctive. This player is the primary tackler on defense. Bobby Wagner of the Seattle Seahawks is a great example of today's style of 4-3 MIKE linebacker.

Cover 2 MIKE: The Tampa Bay Buccaneers made the Cover 2 defense famous, but it has been used in Chicago and will be used in Dallas this year.

The difference between a 3-4 and 4-3 inside linebacker isn't large—and many players show the scheme versatility to play in either system without a major drop-off in production or ability.

For me, the biggest difference comes in the player's ability to shed blocks.

A linebacker in a 3-4 defense doesn't have two space-eating defensive tackles in front of him, so he must be better equipped to come off blocks and fight through traffic to make tackles. On the flip-side of that, a 4-3 linebacker must be quick enough to play in coverage and attack the run. Where you might be able to hide one of your 3-4 'backers in coverage, a 4-3 MIKE linebacker is on an island.

Previous "How to Scout" articles have featured athleticism as the top trait needed, but when looking at middle linebackers, it's second to instincts on the field.

You can call this "football IQ" or "read-and-react," but at the end of the day it all comes down to how well the player puts himself in a position to make the tackle and stop the offense. A great inside linebacker must be quick enough to get to the ball, but he has to first see the ball and know where to attack.

NFL players will tell you that seeing the play—that ability to diagnose what the offense is doing before it does it—is the most important aspect to the middle linebacker position. A hobbled Ray Lewis was able to stop the run in the Super Bowl because of his instincts and ability to see the field. Being quick and strong is necessary, but knowing where to apply your athletic ability is most important.

Scouting a player's instincts isn't as tough as it might sound. When watching film, how long does it take the middle linebacker to identify the play after you have, or does he beat you to it? If you have experience watching game film from the All-22 view, this is a fun way to gauge yourself and the player.

In person, you want to see a linebacker in perpetual motion. When I coached high school football, we told our linebackers to be sharks—always moving, always hunting. That's what I look for in NFL prospects.

And, like Patrick Willis recently said, “I learned this camp that you don’t have to move as fast if you’re smarter. It almost looks like you’re not moving at all but you’re making the plays."

Now that you've found the ball, how quickly do you get to it?

A middle linebacker—in any scheme—must show the quickness to close on the ball-carrier. The job of a linebacker, put simply, is to stop the football. Finding the ball and then shutting it down are the two biggest criteria I look for when coaching or scouting players.

Athleticism is a broad term, so what are we looking for in a middle linebacker?

Change of Direction: There are few plays in an NFL game where a player runs in a straight line, which is why the 40-yard dash is a poor test for non-ball-carriers. A linebacker must be able to change directions quickly without stalling at the top of his cut.

You can teach a linebacker to chop his feet to change directions and chase the ball, but the flexibility and hip movement needed to cut, change direction and explode to the ball are keys to scouting a player.

You can see this on display at the scouting combine during positional drills, but you can watch it in a game too. How well does the middle linebacker explode out of his stance to attack the outside run? Does the player stall when dropping into pass coverage and then breaking on a checkdown throw to the flats?

Strength: An effective inside linebacker must be able to fight through traffic to get to the ball-carrier. That requires strength—both upper- and lower-body—to fend off blockers and to get through subsequent blockers protecting the ball.

We call this "scraping" or "stacking and shedding," and what you want to see on film or in person is a linebacker who can consistently win battles against blockers. If a guard attacks the inside linebacker, he must be able to either beat the blocker to the ball-carrier or be strong enough to get the blocker's hands off of him to make the play.

There are three positions in the NFL that when scouting, I look at leadership: quarterback, center and middle linebacker.

A middle linebacker is the captain of the defense, both literally and figuratively. The greatest middle linebackers of all time were also great leaders. Ray Lewis, Mike Singletary, Dick Butkus...these men inspired the other 10 men on the field to follow their lead.

You can see leadership on the field, especially if you're able to evaluate the player in a losing situation during a game. Does he rally the troops—either verbally or not—and motivate them to play better, or does he wilt under pressure?

Traits and characteristics allow the linebacker to make plays, and that's ultimately what we are scouting—traits and production.

With NFL offenses becoming more spread out, and with more tight ends being introduced into the route tree, linebackers must be able to cover on passing downs. How do we keep track of this and study it?

In a game situation, I keep track of where the middle linebacker goes in coverage with a simple sketch of the field and where the player goes to attack the football. I also like to keep a tally of complete and incomplete passes to the player's area of the field.

This doesn't paint a complete picture of coverage ability—that involves traits highlighted above—but it does show experience, comfort and where a player may need to improve.

It's easy to look at stats on Sunday morning and see which college players had the most tackles, but what was the quality of those tackles? Should a tackle made 10 yards downfield be held in the same regard as a tackle at the line of scrimmage?

Of course not, which is why watching and charting tackles is key to truly knowing if the player can read and react to the offense and put himself in a position to stop the play. 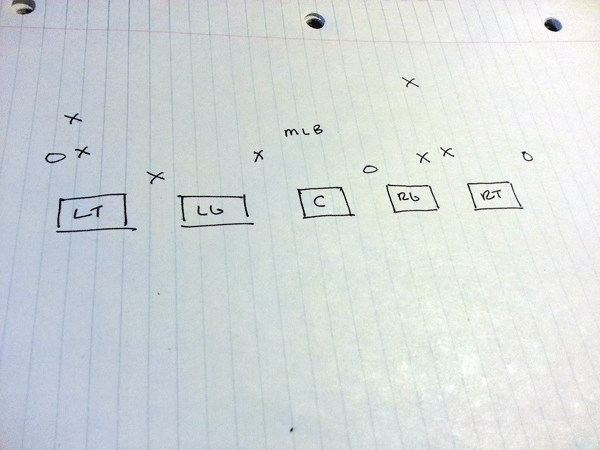 Just like with the other positions, I like to keep this simple. When evaluating game film of linebacker prospects, I have a pen and paper with the basic offensive line drawn. I then put an "X" for every tackle the player makes and an "O" for every missed tackle. This gives me a count of tackles made and missed, but also a picture of where on the field the linebacker is making his plays.

Production is important, but traits are too. Too many college middle linebackers fail to make plays because of poor defensive line protection, but once in the NFL they blossom and begin producing. This is why traits and production must be scouted together.

The middle linebacker is one of the most important players on the football field at any given time. His responsibilities for getting the play call in, getting his teammates lined up correctly and his post-snap duties as a spy, tackler and cover man all show why the inside linebacker is called a "field general."

Finding a great inside linebacker may seem easier thanks to the success of Patrick Willis, NaVorro Bowman, Bobby Wagner and others in recent years. It's not quite that easy, but the above scouting notes will help you on your quest to find the next great middle linebacker.