They both stood there waiting as NBC milked the moment. Gabrielle Douglas on one corner of the floor exercise, Jordyn Wieber at the head of the vault runway. One of these two young women would win the 2012 U.S. Olympic Gymnastics Trials on Sunday night.

Finally, the judges told Wieber to go. She hammered the vault home, scoring 15.800. Now, it was Douglas' turn.

But it was only good enough to beat Wieber on Sunday. Make no mistake—Wieber is still the most likely American to win the gold medal for the all-around in London. 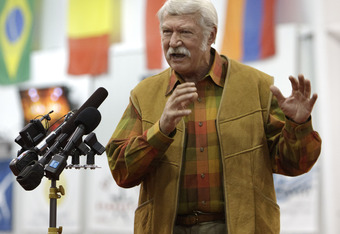 No less an authority than Bela Karolyi said so. He was asked if Douglas could be as good as she was on Sunday at the Olympics.

“I don't see anybody from our team beating Jordyn,” Karolyi said. “Jordyn is sturdy. She's like a machine.”

Officially, Karolyi isn't involved in the U.S. team anymore, although his wife and partner in coaching Marta still is. His hair looks exactly as it always has, just gray, not brown. He famously coached Nadia Comaneci and Mary Lou Retton to Olympic gold medals.

And he is not buying stock in Gabrielle Douglas, or any other American, finishing ahead of Wieber in London.

Don't believe Karolyi? You should have seen the difference between Wieber and Douglas in the media room. Douglas was all smiles, enjoying her first win over Wieber in a major competition. Douglas said her tears of joy mixed with her mascara and that her eyes were burning.

Wieber's eyes also were, but for a different reason. She was stone-faced, or at least as stone-faced as a gymnast can be, patiently answering questions with a smile, yet with a look in her eyes that practically screamed, “This shall not stand!” 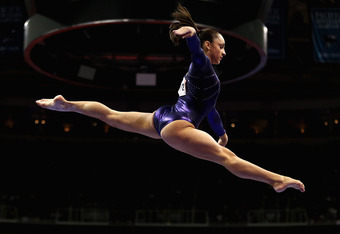 Her words betrayed none of that.

“I think having that little bit of friendly rivalry in the competition is really important,” Wieber said “It just keeps us pushing a little bit more.”

Douglas, 16, is from Virginia Beach, Va., but moved to West Des Moines, Iowa, two years ago to work with coach Liang Chow, who coached Shawn Johnson in 2008.

Douglas has been breathing down Wieber's neck for a while now, having come within a fall on the balance beam of beating Wieber at the U.S. Championships in St. Louis.

She said after that meet, people told her, “It's a good thing you didn't win because you would just be relaxed. Now you're hungry, you have that fire in your eyes. That really came out tonight. All of that hard work has finally paid off.” 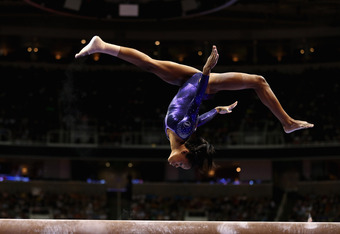 However, implicit in that statement is the idea that Douglas could slack off after having finally beaten Wieber. She said she wouldn't. But first place at the Olympic Trials is something that nobody will remember. This was a warm-up meet, a practice. It's the Olympic gold medal that matters. It's the only thing that matters.

Just ask Johnson. She beat Nastia Liukin at the 2008 Olympic Trials, hammered her in fact, by 1.800 points. Liukin ended up winning the gold medal in Beijing.

The question is whether Douglas has it in her to win the Olympic gold medal. We know Wieber does—she's the defending world champion.

Damin Esper is a contributor for Bleacher Report. Unless otherwise noted, all quotes were obtained first-hand.

Tokyo Olympics Won't Be Cancelled or Postponed Due to Coronavirus

Tokyo Olympics Won't Be Cancelled or Postponed Due to Coronavirus