Maria Sharapova is back and better than ever.

The tennis star’s career has been the definition of a roller coaster. But she’s overcome the lows and will be in position at the 2012 Wimbledon to fly higher than ever before and distance herself from the rest of the women’s field.

Sharapova’s career didn’t take long to take off. She defeated Serena Williams at the 2004 Wimbledon Championships at the young age of 17. One year later, Sharapova had risen to No. 1 in the World Rankings and she followed that up with a victory at the 2006 U.S. Open.

Her historically fast start didn’t last, though. Until she triumphed in the 2012 French Open, Sharapova had only won one grand slam in the previous five years. Shoulder problems and a loss of confidence looked like they would derail her potentially legendary career. 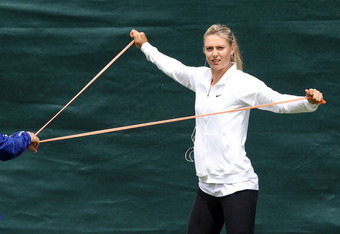 But Sharapova is healthy, confident and ranked No. 1 again and when she wins in London, she’ll claim supremacy over the world of women’s tennis. According to the Daily Mail, Sharapova talked about her hunger for another grand slam victory heading into Wimbledon. She said:

As far as the success I had at the French Open is concerned, my first time getting to the finals and winning it and coming here, I think it's not really what has been achieved before, I think it's going out there and trying to achieve something that you want to do. I'm certainly very happy with what I achieved, but that doesn't make me less eager to want to achieve more.

Sharapova has been a household name for so long that it seems like she should be nearing 30 years old by now. Despite her extensive experience, she just turned 25. She’s in the prime of her career and right now, there isn’t a more talented player in the world.

No women has won the French Open and Wimbledon in the same season since 2002, but it’d be a surprise if Sharapova didn’t pull off the rare feat this year.

David Daniels is a featured columnist at Bleacher Report and a syndicated writer.

Breaking down the men's draw

Breaking down the women's draw

Predictions for the 2020 Australian Open Draw

Predictions for the 2020 Australian Open Draw