As always, if you like what you read here, check out my blog Ballin' is a Habit.

Our friends (yes, we consider them friends) over at Rush the Court had a great article on Sunday poring over and breaking down Steph Curry's numbers over the last two-and-a-half seasons. They came up with these numbers:

The first chart shows Curry's career numbers against four different levels of competition. Notice the drop off against the BCS+Gonzaga.

This chart shows his performance against the BCS+Gonzaga in a year-by-year breakdown.

This is how they interpreted the numbers:

While Stephen has been able to continue to increase his scoring against BCS-level teams each year, his field goal percentage has dropped precipitously this year. This could merely be the result of a couple of off shooting nights (even MJ had his bad games), but it is more likely related to the increased load being placed on Curry as the team’s new point guard with the departure of Jason Richards, who led the nation in assists per game last year. However, despite having Richards shouldering the ball-handling load last year, Curry’s shooting percentage was significantly lower in BCS games than it was in his games against non-BCS games.

What does all this mean? Aside from the obvious, that BCS teams are better than non-BCS teams, it raises the interesting (and controversial) argument that Stephen Curry may not be good as the hype suggests. He is certainly capable of putting up big numbers, but so were many other great college players who never were able to translate their game to the NBA.

Now if you read this blog, you know we enjoy stats and number crunching, but only to a certain extent. We've said this before, but at some point you need to actually watch the games and the players to see what is really happening.

Back to the point: I don't want to say the guys at RTC are wrong for questioning Curry, but, well, maybe I am. Hear me out. 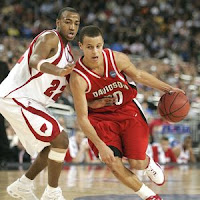 Davidson is not supposed to beat the likes of a Georgetown, or a Wisconsin, or an NC State. Why? Because they simply do not get as much talent into their program as those big time schools do. Calling the Southern Conference even a mid-major conference could be a stretch. The past two years, Davidson has had at most three guys that you could make a case for as high-major talents: Jason Richards, Andrew Lovedale, and Curry. This year, it is just Lovedale and Curry.

When Davidson plays other teams on their level, the rest of the guys on their roster become a threat. Will Archambault, Bryant Barr, Steve Rossiter—these guys are good Southern Conference players. But when they are going up against a team like Purdue, the Boilermakers really don't have to worry about the rest of the roster doing much damage.

In other words, Southern Conference teams need to factor in the Wildcats' role players when they game plan against Davidson. BCS schools do not need to. They can game plan entirely around how to stop Steph, knowing that they will be able to slow down the rest of the Davidson team by putting one guy on them playing help defense.

So not only is Curry going up against better coaching, better teams, and better athletes when he faces the BCS schools, he is facing a defense that can gear entirely towards stopping him. Purdue might be the most well coached team in the country defensively, they might have the best defensive player in the country (Chris Kramer), and they had a week to prepare for Davidson, knowing they didn' 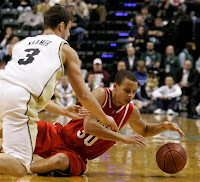 It shouldn't really be a huge surprise that they were able to keep Curry in check (I'd be willing to put a large sum of money that Bobby Riddell, the senior/former walk-on that has been getting minutes with Chris Kramer slowed by injury, spent at least four or five practices playing the role of Steph Curry).

To make matters worse, this year he is playing out of position. Let's get this straight: Curry is not a point guard. Plain and simple. He can play the point, but that doesn't mean he is a point guard. He is a scoring guard that is at his best when he is coming off of screens and either looking for his shot or looking to drive. He just happens to also be a very good passer.

This problem gets magnified when you consider the lack of talent around him. If you put Curry on, say, Oklahoma, he could be an effective point guard. All he would need to do is get the ball up the court (which he can do) and then get the Sooners into their offense (which he can do).

But playing for this Davidson squad without Jason Richards, he needs to be able to bring the ball up and get the Wildcats into their offense, but he is their entire offense. What Davidson does offensively is have Curry bring the ball up and then let him create, either 1-on-1 or using a ball screen, without giving the ball up. Or they have him pass to a wing and then run him off of a number of different screens.

Regardless of what they do, it is rare that Bob McKillop calls a play for someone other than Curry.

So when Davidson faces the better teams in the country, not only is Curry playing out of position, facing better players, and facing defenses that focus more on him, he is acting as the entire Wildcat offense for 40 minutes. No matter how good of shape you are in, that is going to take a toll on your legs by the end of the game, which is just about the worst thing that can happen to a shooter.

So the question remains: Is Steph Curry overrated? Actually, I believe he is. That's not to say that I don't love him or don't think that he is a first team All-American (I think he may actually be the best player in the country). But the media has been blowing him up and talking about him nonstop ever since he went on that tear in the NCAA tournament last year.

It is the Tyler Hansbrough effect—when a player becomes a media darling and spends a significant amount of time in the spotlight, the worldwide leader and other media moguls will beat it to death. 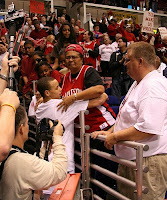 Don't get me wrong, Curry deserves all the attention he is getting. He really is a great story. The son of one of the best NBA shooters of all time gets looked over by all the high-majors, goes to a small school in North Carolina, and proceeds to torch everyone in the country from the first day he sets foot on campus. Add to that the fact that he genuinely seems like a good kid and a nice guy, and you have the worldwide leader's dream.

No matter how good of a player Curry is, at some point (and we have reached this point) his hype is going to surpass his skills as a player.

So the next logical question is, will he be a pro? I actually think he will, although I doubt he will be a star. RTC compared him to J.J. Redick, which is a fair comparison, although I believe Curry has more pro potential than everyone's favorite poet. Redick was more of a pure shooter in college than Curry. J.J. did develop a little bit of a penetration game, but he still relied heavily on coming off of screens for a catch-and-shoot three.

Curry, on the other hand, is a much better all around player than Redick was. He is more athletic, he has a better handle, he is a much better passer, and he is better at getting to the basket. He is also a better defender than J.J.

That doesn't mean, however, that Curry is going to be a great pro. He is not a point guard, and although he has grown since he's been at Davidson and is now listed at 6'3", he is still not near the ideal size for an NBA two. But the kid is a smart player, understands the game so well, and is as good of a shooter as you will ever see.

I can see him having the type of career that Jannero Pargo or Eddie House is having. He's never going to be a star, but I can absolutely see him being an instant-offense kind of guy off someone's bench.

I love watching Curry play as much as LeBron does, and I really am rooting for the kid to make it in the league, I just don't see him having the physical tools to become a star. But hey, Eddie House just won a ring with the Celtics, and Pargo is making $3.5 million a year over in Russia right now.