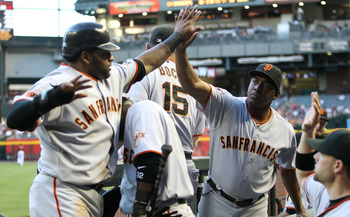 The 2010 San Francisco Giants won the World Series on the strength of their excellent home-grown starting pitching, lights-out bullpen and clutch (if not overwhelming) offense.

This year, as the champs do their best to stage a repeat, they're going to have to step it up even further, facing the likes of the Phillies Big Four pitchers, the surging Diamondbacks and the always-dangerous Rockies.

Still, tell any Giants fan that Tim Lincecum or Matt Cain are having good years, and they'll shrug and say "yeah, what else is new?" Mention that Brian Wilson has converted 20/22 saves this year, and hasn't given up a run since May 18th, and they'll yawn.

We're truly spoiled this year, so I'd like to mention five players who managed to fly under the radar, but whose great play on the field has helped keep this team in first place. 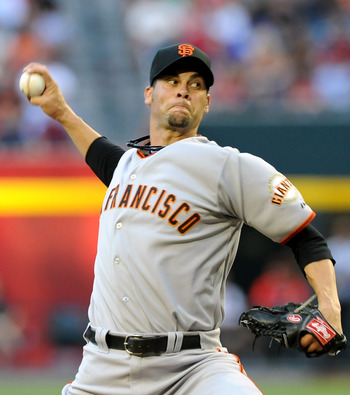 No player on the Giants is having more of a standout season than Ryan Vogelsong. He originally came up through the Giants' system. He made just 17 relief appearances for the Giants, before being traded to Pittsburgh in 2002, in the deal that brought Jason Schmidt to San Francisco.

His 2011 season, however, is like night and day. Since taking over for the injured Barry Zito, Vogelsong has pitched seven quality starts (six or more innings pitched, three or fewer earned runs allowed) in his 10 starts. His ERA on the year is a stellar 1.92, which would lead the majors if Vogelsong had thrown enough innings.

While it seemed impossible to think that the Giants pitching staff could improve from last year, Vogelsong looks like a legitimate and completely unexpected star. 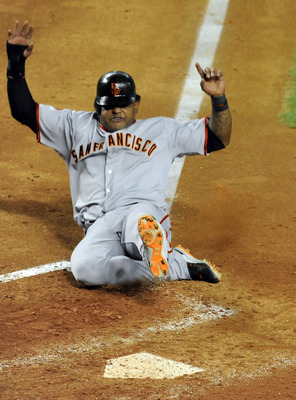 While the infamous "Operation Panda" failed to get Sandoval in fighting shape before the 2010 season, his well publicized weight loss this past offseason seemed to actually do the trick. Giants general manager, Brian Sabean, and manager, Bruce Bochy, sat down with the Panda last year and had a tough-love talk. They told Sandoval that he could actually begin the 2011 season in the minors if he didn't, literally, shape up.

Well he did, and he's looking great. According to Andrew Baggarly of the San Jose Mercury News, Sandoval lost almost 40 pounds and put on a lot of muscle. Sandoval also admitted that he'd never really lifted a weight before in his life, which makes his 2009 season even more remarkable.

While it's easy to be swayed by these small samples, you can bet that these struggling Giants hitters are looking forward to having that bat in the middle of the lineup. 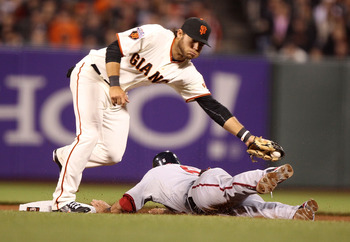 While most people remember Brandon Crawford for his grand slam against the Brewers on May 27th—Crawford's first hit in the majors—his primary value comes from his defense. Crawford was originally projected not to make the team for another year or two, but injuries to Pablo Sandoval and Mike Fontenot forced his early promotion, and he's done his best to make a case for a starting job.

While, again, it's easy to fall into the small-sample argument, advanced fielding metrics show that he's a well-above-average defender.

Projecting his stats across a whole season (150 games), his Ultimate Zone Rating (which tries to show defensive range, unlike errors and fielding percentage) sits at 16.6, which is very good. Compare that with Rich Aurelia (6.1), Derek Jeter (-5.0) or Miguel Tejada (-3.7 lifetime, -20.2 in 2011), and you see that Crawford fills the shortstop spot pretty well.

While his hitting numbers certainly don't make him a terror at the plate, he handles himself well and could easily be the shortstop of the future for this team. 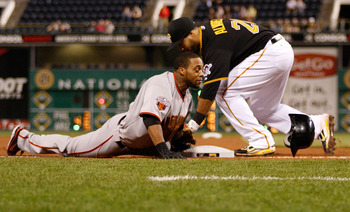 Darren Ford, a man who has only had 12 plate appearances in the past two years in the majors, has still had a very profound effect on the Giants in 2011.

Ford, who earned a promotion to the majors when center fielder Andres Torres went on the DL, serves just one function on the team. His speed on the basepaths, combined with the Giants' propensity to one-run games, gave Ford an important role on the team: coming in as a pinch-runner, stealing his way into scoring position and scoring the game-tying or game-winning run.

While Ford may never really make it as a batter, his presence on the lineup gives Bochy many more options for late-inning heroics, and Ford will almost certainly make the cut when the rosters expand in September, if not sooner.

Ford is currently on the DL after spraining his ankle against the A's in May. 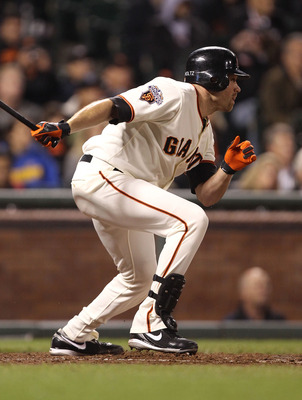 While Nate Schierholtz may not have the stats to back it up, it's hard to find a fan who doesn't recognize how much he's contributed to the success of the team. Though he was primarily used as a late-inning defensive replacement for Pat Burrell in the latter part of 2010, he has earned more starts in 2011 and has been a key figure in the Giants' late-inning comeback wins.

His speed and defensive abilities rank among the best NL right fielders, and his cannon of an arm has led fans to make highlight reels of Nate gunning down opposing baserunners.

What's remarkable, though, is how often he seems to come through in clutch situations. He's batting .346 in "high leverage" situations (Fangraphs.com), with a .896 OPS. He has seven come-from-behind hits in 2011, in which he's either tied or put the Giants ahead in games that they were losing.

While I've always loved having his glove and speed in right field, he's also quickly becoming the guy that I want to see come up to bat when the Giants are losing.