Ranking the Most Blinged-Out Championship Rings in Sports

There are many athletes who claim to want to win a championship in order to cement their names in the history books and others who want the feeling of ultimate victory.

However, there is truly only one reason...

With the Mavericks having won one of the most epic championships in recent memory, one would expect the team to receive gaudy pieces of jewelry.

"Rings are old school. Rings are done. It's time to take it to the next level and do something different," he said in a USA Today article.

While he may have a point, let's look back at the best rings in history and why he may want to reconsider.

Here are the 30 most blinged-out championship rings in sports. 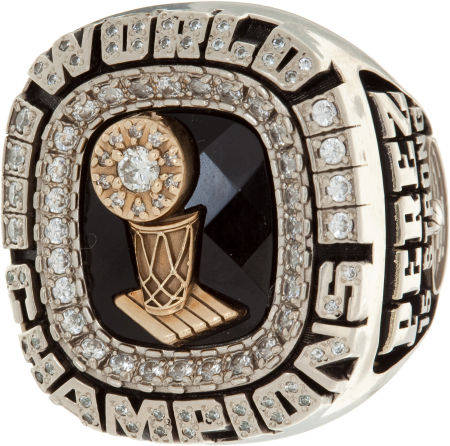 Dwyane Wade's first-and-only title thus far, this was a time when most people rooted for the Heat as the underdog youths trying to bring pride back to a beleaguered city.

With the help of an aging Shaq, Wade did everything he could and got that ring.

The Heat became Wade's team after the epic series. 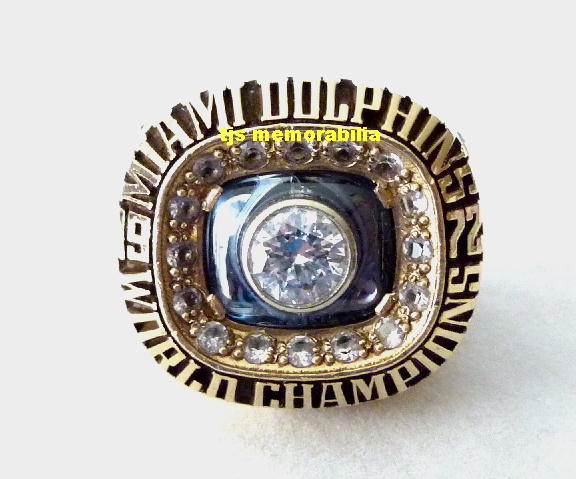 With the only perfect season in NFL history, the Dolphins still may be remembered most for being in the epic comedy Ace Ventura: Pet Detective.

Led by head coach Don Shula and stars Bob Griese and Larry Csonka, the Dolphins trampled through the league with ease. 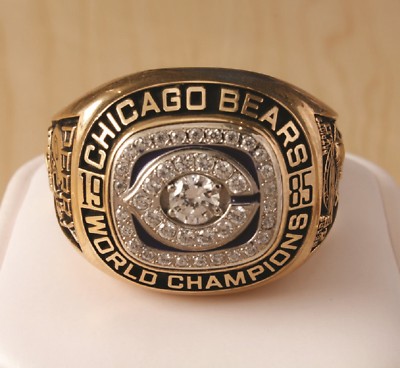 Almost the second perfect season in NFL history, the Bears finished the year at 15-1.

Super Bowl MVP Richard Dent played out of his mind. The defensive end had 1.5 sacks, forced two fumbles and blocked a pass in the Super Bowl.

Perhaps Julius Peppers can reach that plateau at some point for the Bears. 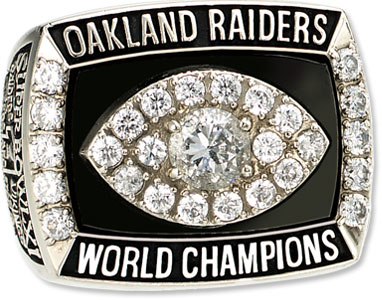 The ring says it all.

Oakland gained a Super Bowl-record 429 yards, with 288 in the first half.

Wide receiver Fred Biletnikoff had four catches for 79 yards and was named MVP, becoming the only wide receiver ever to win Super Bowl MVP and not have 100 yards receiving (there have been six receivers named Super Bowl MVP). 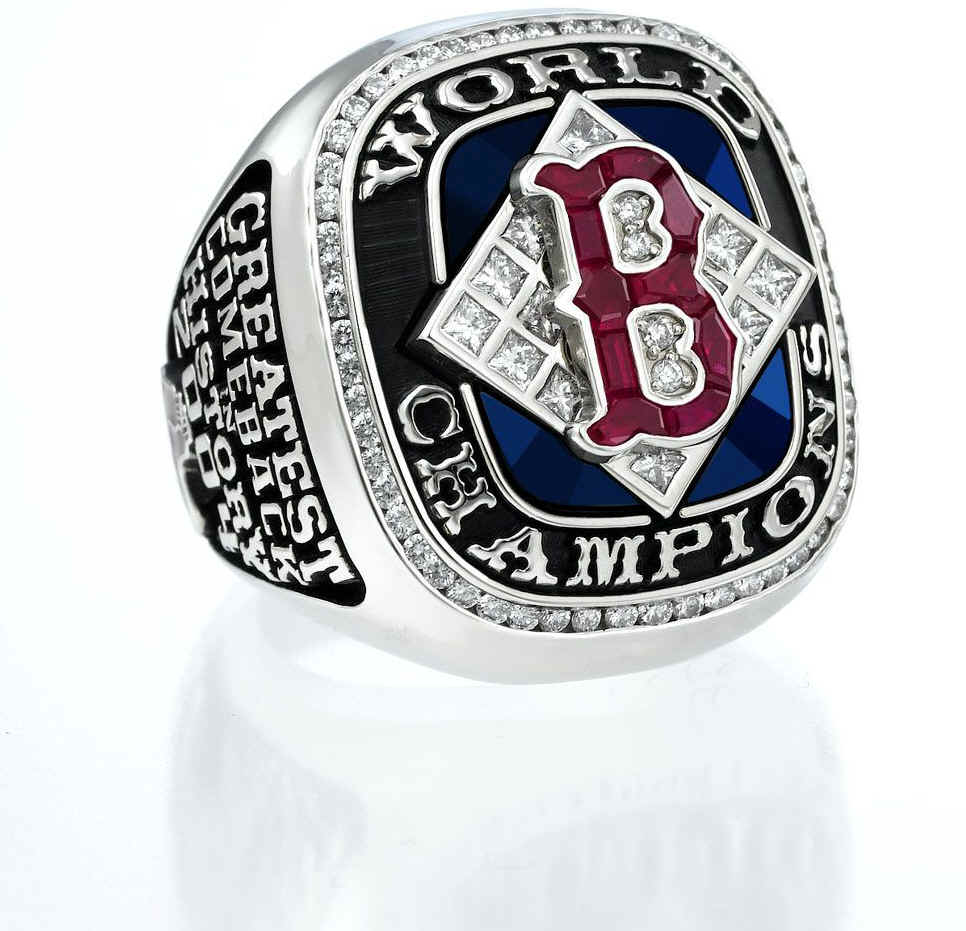 While this series was memorable in that the Sawx finally ended "The Curse," it was the ALCS that caused jaws to drop. 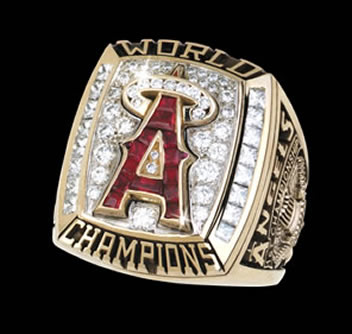 Jarrod Washburn, 18-6 with a 3.15 ERA, led a stellar pitching staff that allowed the fewest runs in the league. 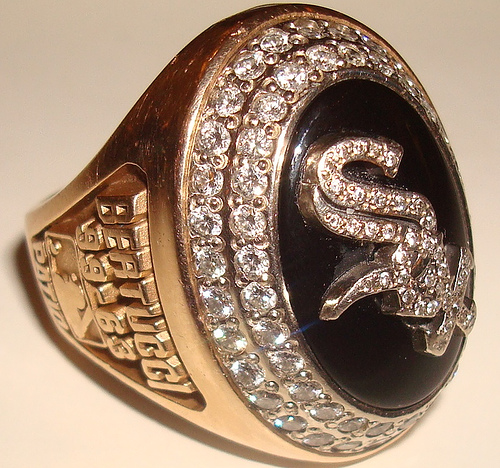 Circular and straight to the point, just as Guillen is, this ring exemplifies determination and pride.

Led by fiery coach Ozzie Guillen, the White Sox swept the Houston Astros and went on to receive one of the more unique championship rings in World Series history. 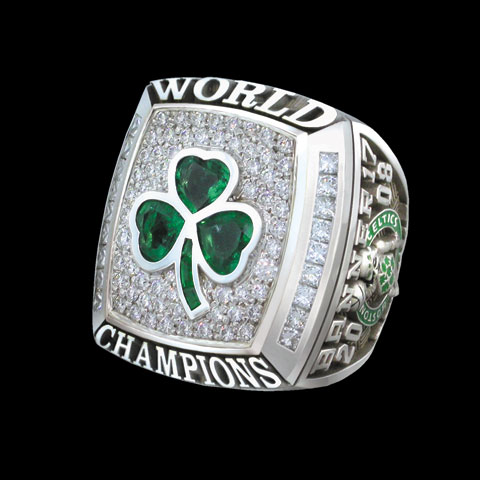 After establishing the first "Big Three" of this era, the Celtics were expecting annual domination and were thrilled with the initial influence that the team laid on the league.

Bereft of another ring after that magical year, Kevin Garnett, Paul Pierce and Ray Allen have instead seen their careers snowball towards irrelevance.

It's only a matter of time before they become fully mortal. 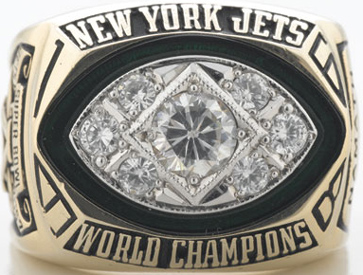 The first Super Bowl victory for the AFL, Super Bowl III featured one of the greatest upsets of all time.

Joe Namath was known for guaranteeing a victory before the game as well as not throwing a touchdown or a pass at all in the fourth quarter.

Nonetheless, he was named MVP. 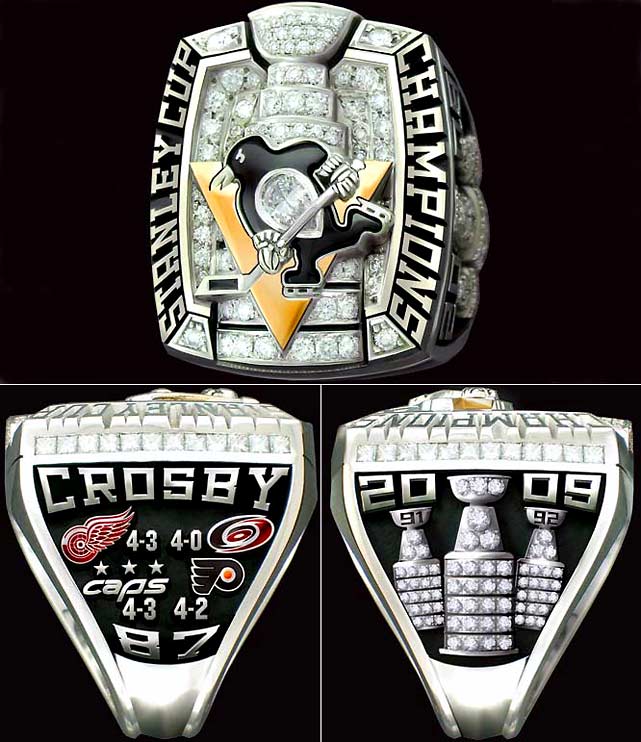 Something about this ring screams promise and future success.

After winning his first title, Sidney Crosby seemed ready to overtake the NHL and continue to excite the hockey world with annual championship victories.

Well, it hasn't exactly worked out that way, but Crosby still has become arguably the most potent player in the league.

Fans are still waiting for that next piece of glamour. 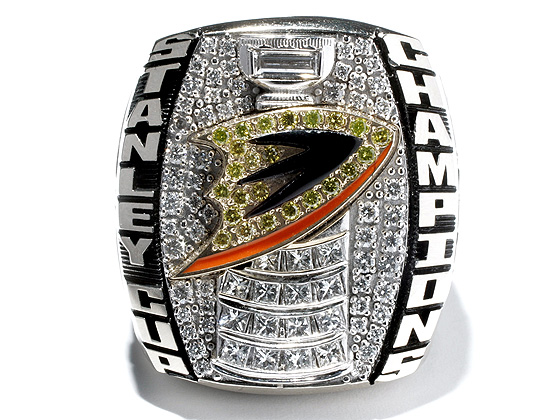 In a brutal match, the Ducks beat the Ottawa Senators in five games.

Favored to be in the finals, the Ducks had the most penalties of any team in the playoffs and even had a suspension, but still were the best penalty-killing team, led by Scott Niedermayer and Chris Pronger.

A dominant performance translated to a gaudy piece of jewelry. 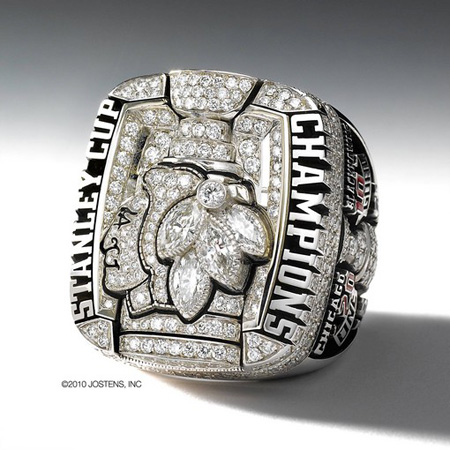 With the longest active Stanley Cup drought at the time, the Blackhawks were clearly motivated.

This was the first Stanley Cup championship for Chicago since 1961, and the Hawks, led by Patrick Kane and Jonathan Toews, got it done.

It was a memorable year, as Patrick Kane joined Brett Hull and Chris Chelios as the only players to win both the Olympic silver medal and Stanley Cup in the same year. 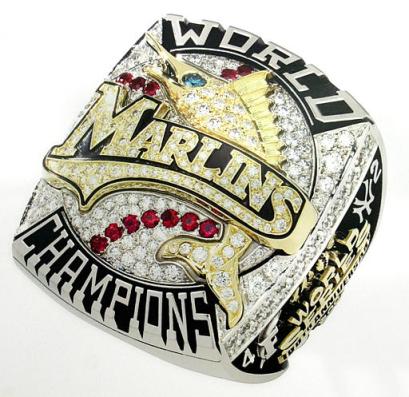 David and Goliath at its best.

With the MVP of the series, Josh Beckett, pitching lights out and a young-and-promising hitter, Miguel Cabrera, tearing the baseball apart, nobody could stop this hungry squad.

A once promising team would soon lose all its stars and have to rebuild through the draft.

Only time will tell if their new crop of youngsters, featuring Hanley Ramirez and Mike Stanton, can bring a winning way back to Florida. 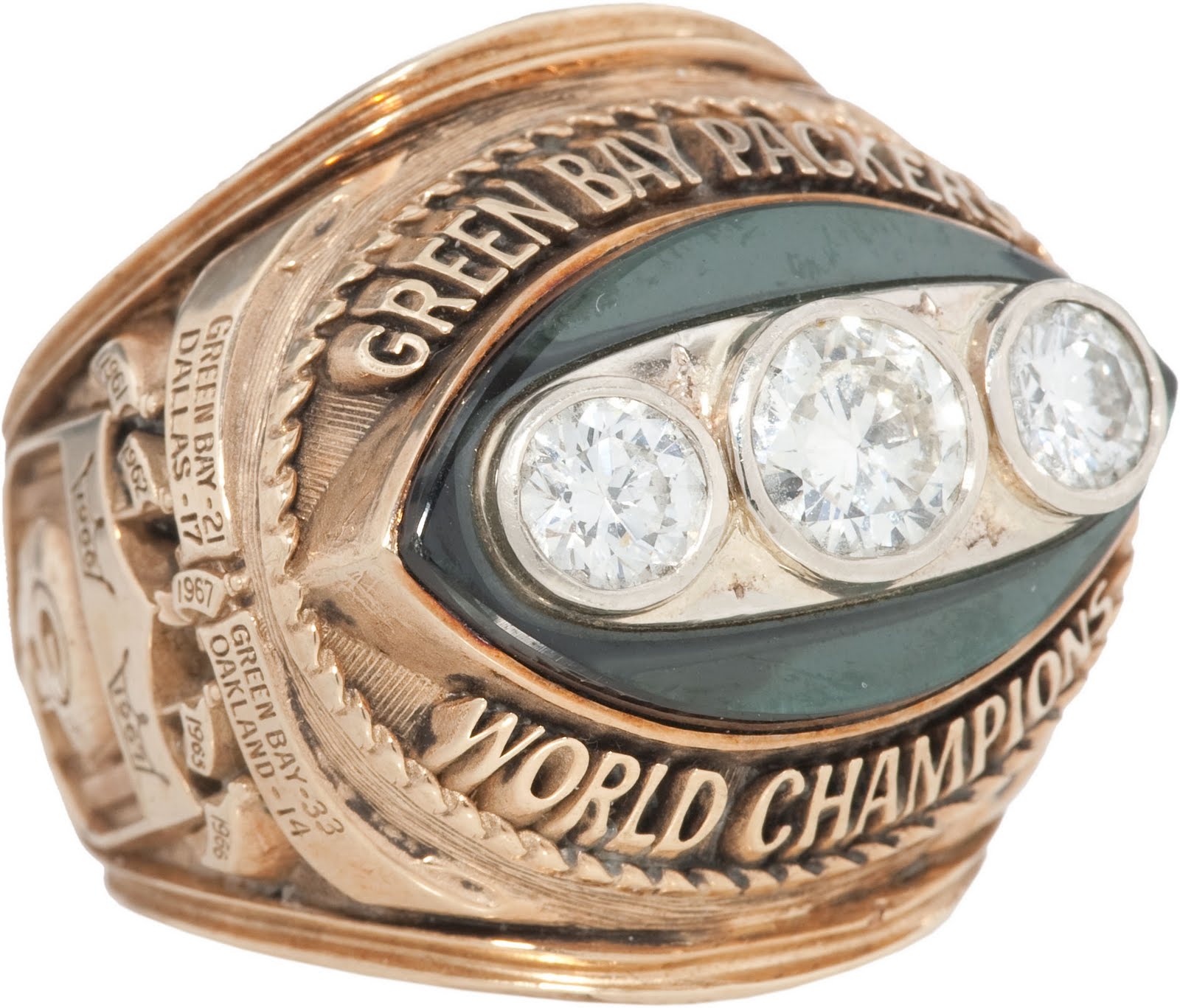 The Packers, led by Hall of Fame quarterback Bart Starr, won the first two Super Bowls to establish themselves as the earliest dynasty.

While some of the new rings may be bigger, this one established early on that flash was necessary to celebrate championship victory. 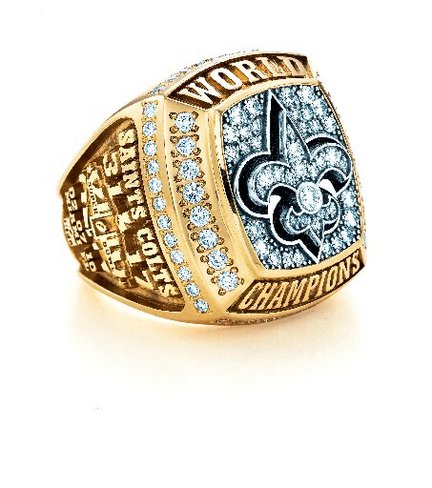 One crucial interception in the final seconds changed the fortunes of New Orleans forever.

A society that was in need of hope and something positive after suffering from Hurricane Katrina, New Orleans watched its feisty team march behind its exciting and motivational signal caller, Drew Brees. 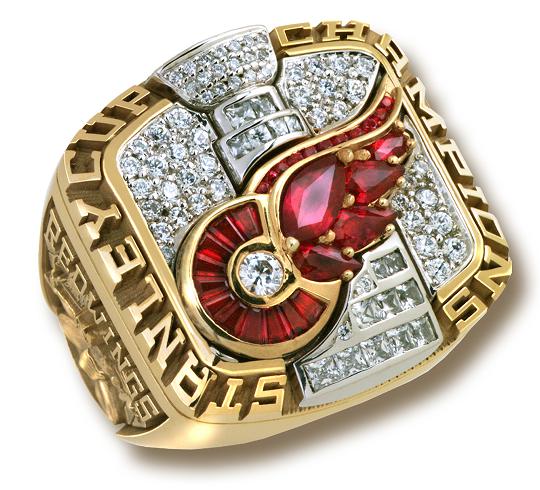 The Red Wings became the first team in NHL history to win the Cup after starting the playoffs with two losses at home, winning 16 of 21 games en route to their third Cup for coach Scotty Bowman. Bowman's ninth Cup overall became a new coaching record.

Experience was evident in this series, as the opposing Carolina Hurricanes were making their first appearance in the Stanley Cup Finals. 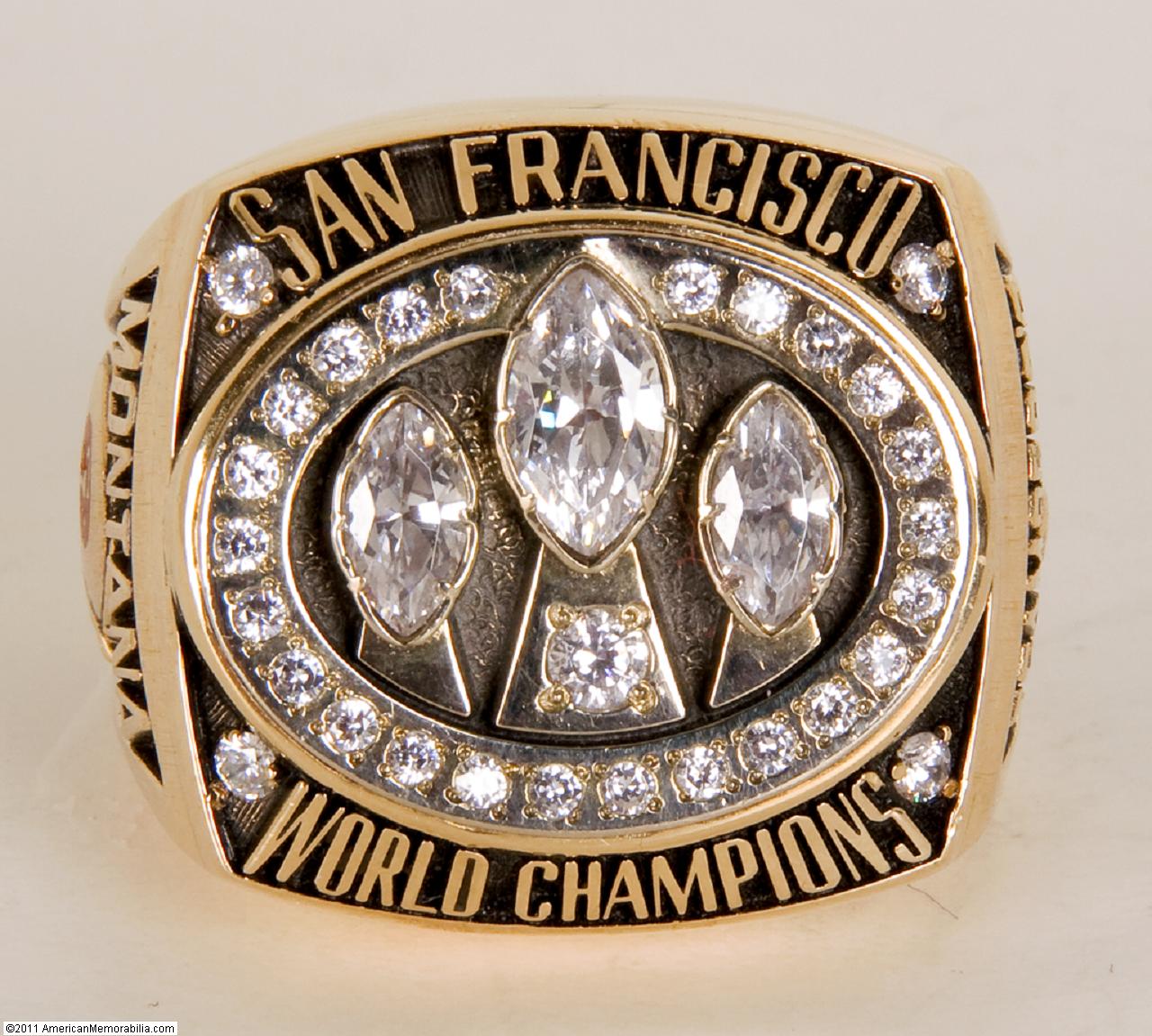 Back in the 49ers heyday.

The 49ers became the first team to win five Super Bowls, while the Chargers were making their first Super Bowl appearance. The combined score of 75 and the 10 total touchdowns both remain Super Bowl records, and it was the first time that both teams scored in all four quarters of a Super Bowl.

This was the game in which Steve Young emerged out of the shadow of Joe Montana. 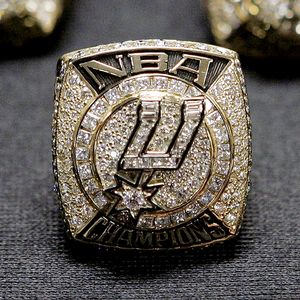 This was Cleveland's first trip to the NBA Finals in franchise history and San Antonio's fourth. It clearly showed, as the Spurs swept the Cavs 4-0 in the series.

We all miss those days when Eva Longoria roamed the stands in San Antonio. 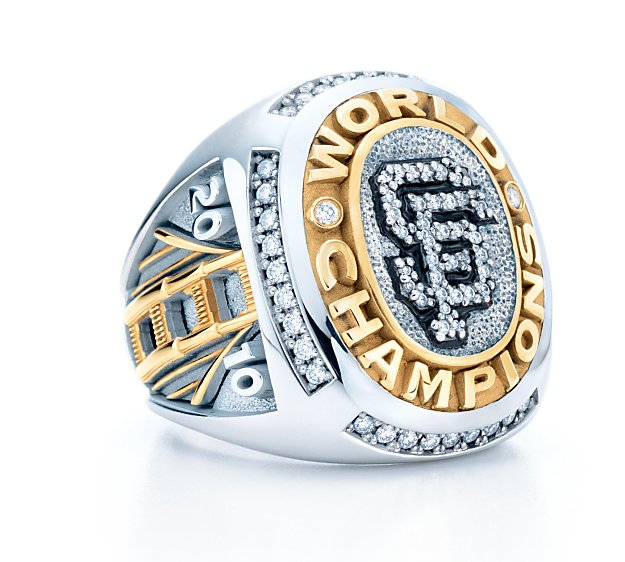 This ring exemplifies youth, which is exactly what the Giants used to win the 2010 World Series against the Texas Rangers.

With Tim Lincecum, Jonathan Sanchez and Matt Cain leading a dominant pitching staff, the offense didn't need to do much. However, with promising catcher Buster Posey leading the charge, they scored enough and closed it out easily with the bearded freak, Brian Wilson, shutting down the Rangers' lineup. 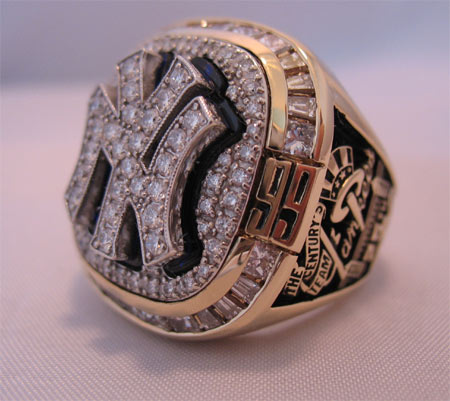 This Yankees victory was their second title in a row, third in four years and 25th overall.

Mariano Rivera established himself as perhaps the best closer ever after winning the MVP of the series. 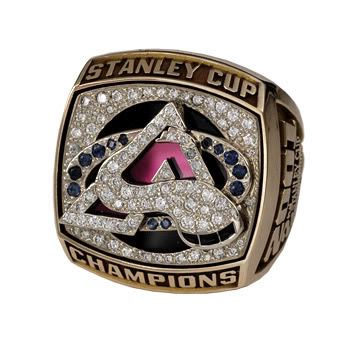 Back when goaltenders dominated the league.

After a record 19 shutouts by goalies during the 2001 playoffs, the Avalanche defeated the New Jersey Devils to win their second Cup. Patrick Roy naturally won the MVP award. 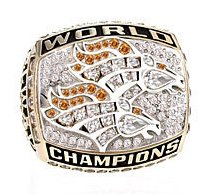 Qualcomm Stadium would also host the 1998 World Series, becoming the only stadium to host both events in the same year. 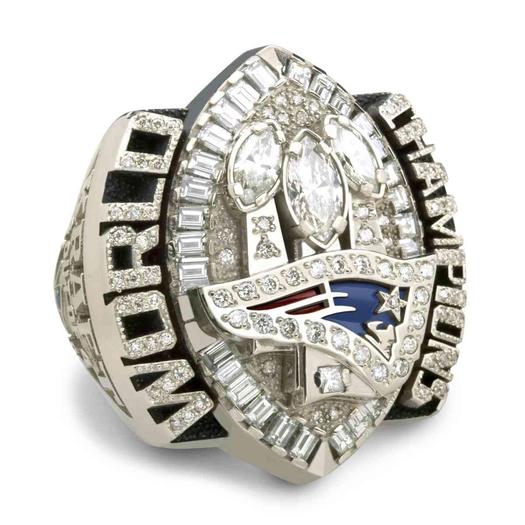 The Patriots became the second team after the Dallas Cowboys to win three Super Bowls in four years, their third in a row by a margin of three points.

This was the Patriots' first-ever outdoor Super Bowl and established their mark as an official dynasty.

So did their ring. 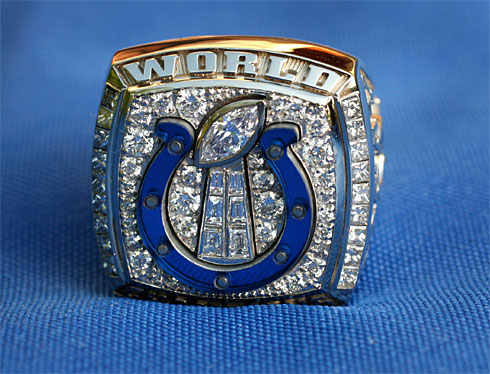 A true match of wits.

Peyton Manning finally got his ring and won the MVP, going 25-for-38 for 247 yards, with a touchdown and an interception.

He got the job done, and his brother would follow suit the following year. 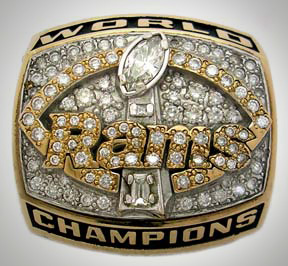 This game was defined by one yard.

After two quarters dominated by defense, the Titans were driving down on the final drive to potentially tie the game. Rams linebacker Mike Jones tackled Tennessee wide receiver Kevin Dyson one yard short of the goal line to end the game.

Titans fans still cringe when reminiscing about that fateful game. 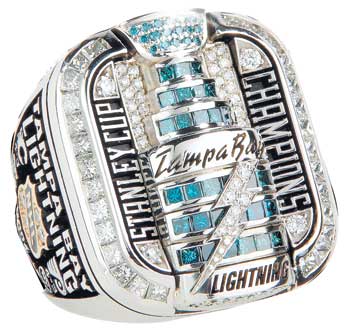 It may be simple and straight to the point, but this ring exemplifies beauty and hard work with a bulky confidence surrounding it.

Led by young studs Martin St. Louis and Vincent Lecavalier, Tampa Bay made its first Stanley Cup appearance ever and, with the help from physical winger Dave Andreychuk, was able to stifle the potent offense of Calgary's Jarome Iginla.

An epic series produced an even sexier piece of hardware. 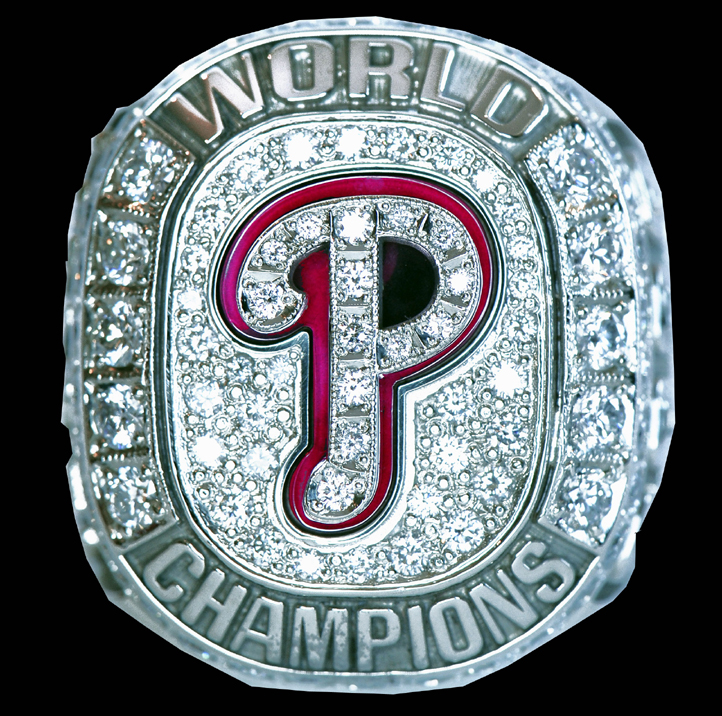 Diamonds are forever in this ring.

With pictures of this hardware used as motivation in the Philadelphia locker room, this squad has struggled to find the championship form they had in 2008.

However, after earning this one, what else do they really need? 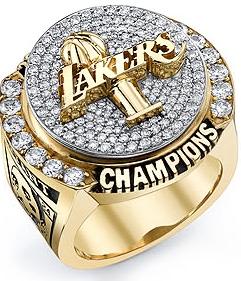 People wonder why the Lakers seemed to play with no enthusiasm during the sweep against the Mavericks, but it's clear that they had no more motivation to win.

As the first of back-to-back rings for the Lakers, this 2009 championship ring surely opened many eyes.

Maybe Andrew Bynum faked his injuries so that he could stay home and cuddle with his two rings. 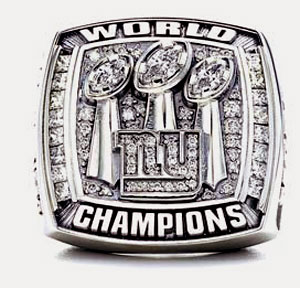 Ballin' was the motto of the Giants during their postseason run, and the ring represents that thoroughly.

Eli Manning had his moment to shine and grabbed it by the horns, although he can thank David Tyree for helping him out.

In one of the most epic underdog performances ever in a Super Bowl, the Giants ruined the New England Patriots' undefeated season with a second-half surge that ubiquitously caused jaws to drop: 18-1, that's all that needs to be said. 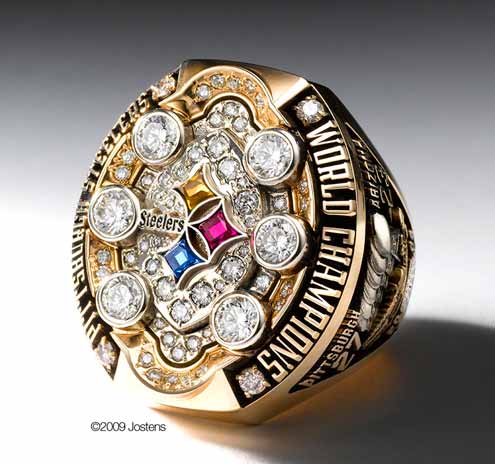 Bruce Springstein performed at halftime just to get a chance to witness this epic ring.

While one side is personalized with the player’s name and number, the other has six round diamonds carved around the Steelers logo to celebrate six Super Bowl victories. The 14k yellow-gold ring weighing 104 grams (approximately 3.7 ounces) has 63 round diamonds totaling 3.61 carats.