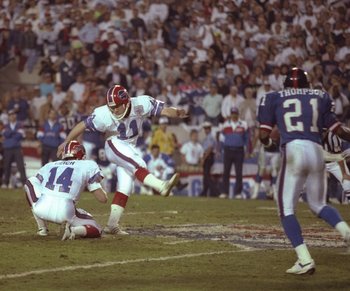 Wide right: The mention of those two words causes a deep pain to emerge from a not-so-deep place in every tried and true Bills fan's heart. If you rewind 20 years you can relive that instant. But it is perhaps the moments since then that have defined the Buffalo Bills' existence over the past two decades. It seemed the hope for Buffalo was eerily dampened on that sad night. Here are eight of the most significant moments in the past twenty years of Buffalo Bills football.

This was perhaps the most painful moment in recent history. The Bills were on Monday Night Football for the first time since 1994. They did the unthinkable and scared the heavily favored Cowboys, who then decided to do as they had always done against the Bills in big games: win. The 25-24 final score saddened many Bills fans.

For the first time since Jim Kelly, the Bills were able to get a former Pro Bowler under center. Long before Donovan McNabb, Drew Bledsoe took the march of shame, from the friendly confines of a Super Bowl-contending team to its dysfunctional division rival. While he came to Buffalo with less fanfare than McNabb did in Washington, Bledsoe actually had much more success and less run-ins with his head coach.

Music City Miracle: I reference this term lightly because as is the case in most events in history, it is often one that is used by the victors. Any Bills fan would likely dub this play the Music City Machete to the Heart, or something along those lines. This play would end what turned out to be the Bills' last playoff appearance. Think about this for a second: since this play happened, an entire generation of Bills fans, have never seen their team rise above mediocrity.

Bruce Smith, was perhaps the greatest defensive player in Buffalo Bills history. He spent over 14 years in a Bills uniform, but left to join the Redskins in a Daniel Snyder splurge. One list has Smith as the fourth-greatest pass rusher of all-time. It's hard to imagine four guys in Bills history having a more profound impact on the team than #78.

Doug Flutie without a doubt is one of the most endearing sports figures in Buffalo Bills history. He was basically the cult hero similar to what Ryan Fitzpatrick is today. They carry a similar background as both played their college football in the state of Massachusetts. Both lack the ability to be thought of as the franchise guy despite exceeding all expectations for themselves. Think about it: Fitzmagic = Flutie Flakes?

This would be the beginning of the end for the Bills, a team that had watched its window of opportunity quickly close after four years of dominating the AFC. It was this year that the Bills would be knocked down unexpectedly by the upstart Jacksonville Jaguars led by Mark Brunell, among the long list of former Brett Favre back-ups to find success in the NFL. This loss would bring to an end the long and successful Jim Kelly era in Buffalo.

In sports there is perhaps no greater moment of pride than when a team with all the odds stacked against it somehow wills its way to victory. Fans fall in love with these types of stories that go down in the history books, and the players' careers can be defined by their very participation in such a moment. Frank Reich goes down as the de facto greatest back-up quarterback in Bills history based on his ability to rally the team from unbeatable odds. One has to wonder what chance the Bills might have had if Reich had suited up during one of their Super Bowl trips.

Scott Norwood's epic miss would go on to set the course for two decades' worth of futility  In other countries, far worse things happen to players who fail in big moments than what happened to Norwood. But suffice it to say, the miss essentially ended his career, never giving him the chance to make up for and redeem himself.