Boise State Football: The 20 Most Beloved Figures in Team History 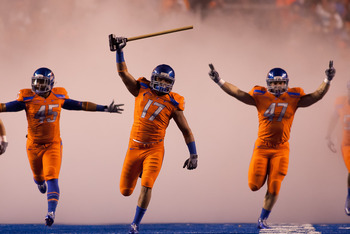 You either love 'em or you hate 'em.

Either way you look at it, the program has been shaped by a number of memorable coaches and players.

Even marriage proposals as well!

From Dan Hawkins to Ian Johnson to Jared Zabransky, there have been so many distinguished people who have donned the blue and burnt orange.

Follow along as we count down the 20 most beloved figures in program history. 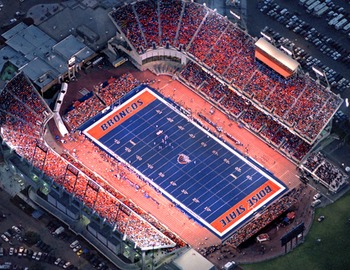 Readers of this slideshow may be wondering, "Who the heck is Dusty Kline?".

Kline was the first head coach of the Boise State Football team all the way back in 1933.

Fans of every major college football team have to give credit where credit is due.

Kline can certainly be credited with heading the birth of Bronco Football. 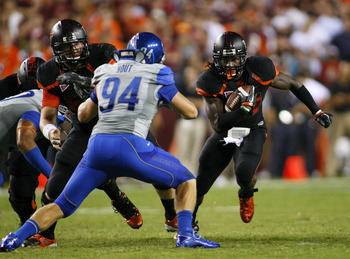 Byron Hout will forever be remembered for being on the receiving end of a punch from then Oregon running back LeGarrette Blount.

Hout hasn't necessarily been an outstanding player for Broncos, amassing only 81 tackles in three full seasons.

However, he will live on in Boise State lore because of the incident with Blount. 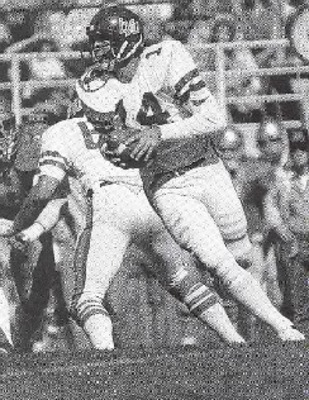 Joe Aliotti was a 1st team All-American quarterback in 1979.

He is currently the Dean of Students, as well as offensive coordinator, at De La Salle High School in Concord, CA.

Doug Scott played defensive tackle while at Boise State, and earned a spot on the AP All-American first team in 1979.

He was also a part of that same I-AA national championship squad.

Terry Hutt was member of the 1977 AP All-American first team as a wide receiver. 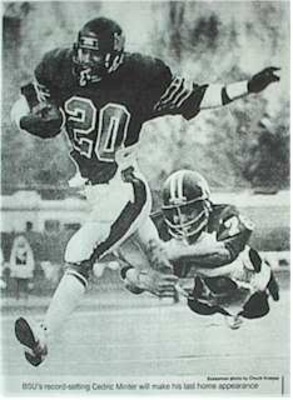 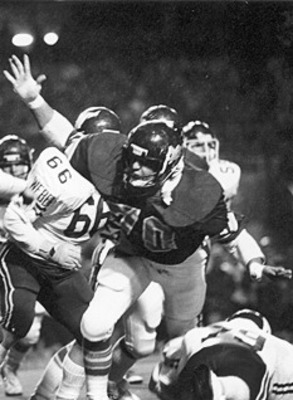 Randy Trautman is one of the finest defensive players to ever play a down at Boise State.

He was the anchor of the defense during the run to the 1980 I-AA national championship. 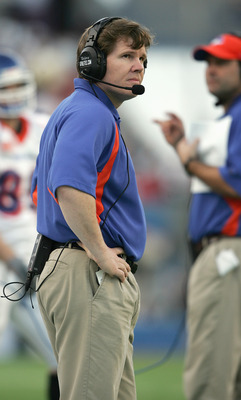 Following the 2005 season Hawkins left to take the head coaching position at the University of Colorado. 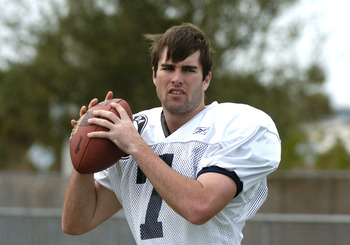 The argument can be made that Ryan Dinwiddie is the greatest quarterback to have ever played for Boise State.

That debate comes down to the choice between Dinwiddie or current Broncos quarterback Kellen Moore.

During his senior season, Dinwiddie passed for 4,031 yards along with 28 touchdowns and only 5 interceptions.

He was, at one point, the career FBS leader in passing efficiency at a 168.9 clip.

That record was broken by Hawaii's Colt Brennan in 2007.

Dinwiddie is currently playing for the Saskatchewan Roughriders of the Canadian Football League. 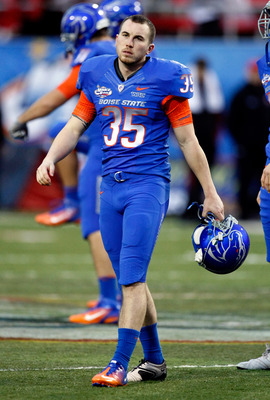 Kyle Brotzman recently finished his career as Boise State's kicker, with his last game coming in the Las Vegas in December.

During his senior season in 2010, he was the leader for total points scored among all active FBS players.

He will be most remembered for missing a kick in overtime against Nevada that inevitably pushed Boise State out of BCS contention. 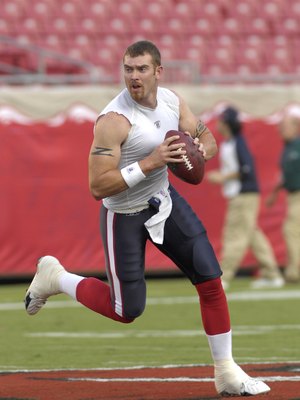 He lead the Bronco's first ever appearance in a BCS Bowl Game, a 43-42 triumph over Oklahoma.

Zabransky was named the offensive MVP of the game.

Because of that accomplishment, he was placed on the cover of EA Sports' NCAA Football '08.

He's currently a free agent in the Canadian Football League. 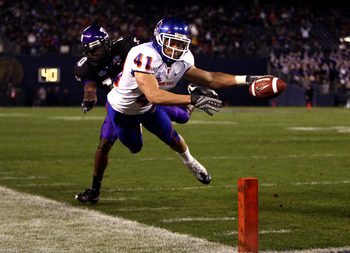 Ian Johson was the starting running back for the Broncos from 2005-2008.

He is a Boise legend, having rushed for 4,184 yards and 58 touchdowns in his career.

Johnson will forever be remembered for scoring the winning touchdown against Oklahoma in the 2007 Fiesta Bowl.

Immediately after getting into the endzone, he rushed over to his girlfriend, Chrissy Popadics, and proposed to her on national television.

Johnson is currently playing for the Detroit Lions. 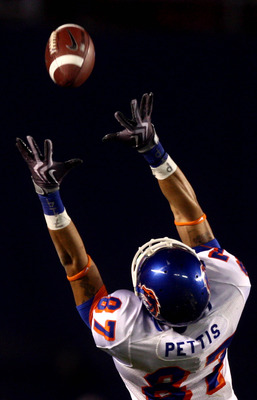 He was selected by the St. Louis Rams in the 2011 NFL Draft. 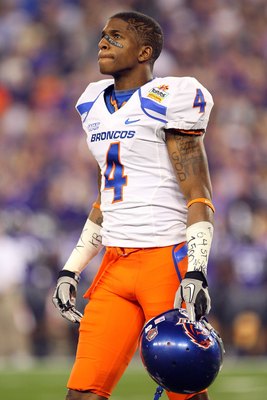 The two formed one of the best receiver duos in college football history.

He was drafted by the Detroit Lions in the 2011 NFL Draft. 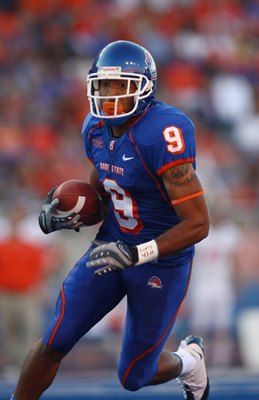 Maybe one of the most gifted athletes to ever play football at BSU, Jeremy Childs really left his mark at Boise.

He ranks second all time in receptions at Boise and is one of the only players in program history to leave school early for the NFL.

He is currently a free agent, having most recently played for the San Diego Chargers in 2009. 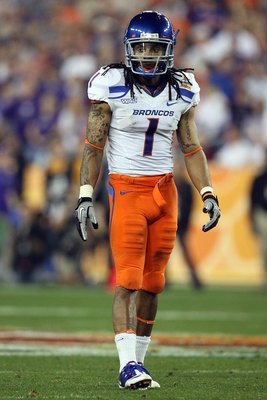 Kyle Wilson will be remembered as one of the best defensive backs in program history.

He is also one of the only BSU players to have been drafted in the first round of the NFL Draft, going 29th overall to the New York Jets in 2010. 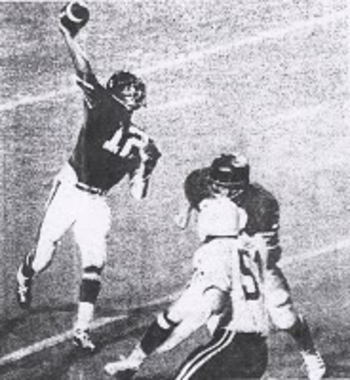 Jim McMillan is the only player in program history to have his number retired.

He is considered to be the first in a long line of great quarterbacks at Boise State.

McMillan played for the Broncos from 1971-1974 when Boise State was a Division II school. 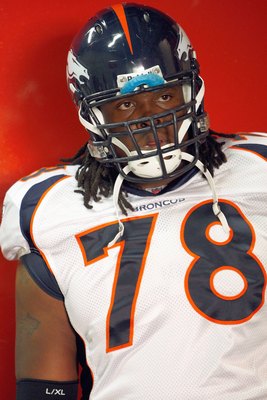 The argument can be made that Ryan Clady is the best player to ever play at Boise State.

He was a crucial part of the Boise's offense in 2006 when the team made a run to a victory in the Fiesta Bowl.

During that game, he had the key block for Ian Johnson in the winning statue of liberty play.

Clady was a first-round pick in the 2008 NFL Draft, going 12th overall to the Denver Broncos. 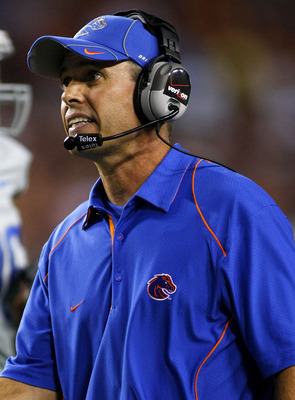 Chris Petersen is arguably one of the best college football coaches in America.

He is loved by the Boise Community and is set on staying as the head coach at BSU as long as he is welcome. 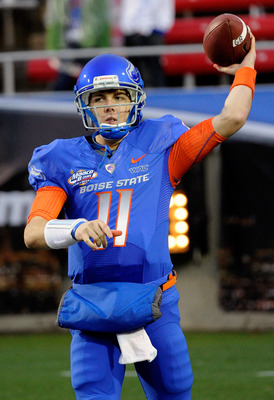 Kellen Moore is the most revered player in program history and he still has a season of eligibility remaining.

He was a 2010 Heisman Trophy finalist as well as a member of the AP All-American 3rd team that season.

Moore has amassed a 38-2 record as the Broncos' starting quarterback.

He has also lead his team to two straight bowl victories, including a 17-10 victory over TCU in the 2010 Fiesta Bowl.