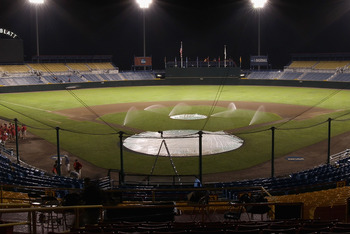 Over the last decade, the Georgia Tech Yellow Jackets have been known as a team that is a regular season power and postseason pushover.

Don't get me wrong. They are a great program. they have hosted more than their share of regional and super regionals in recent years. They also made the College World Series in 2002 and 2006. You just expect more when you are talking about a perennial top-10 team.

For every year like 2002 or 2006, there is a year like 2009 when Tech lost a home regional to upstart Southern Miss, a team that nearly missed the NCAA field altogether.

The 2011 regional they have been given is a tough one. Southern Miss is back, but this time they are solidly in the field and have their eyes on another run to the College World Series. They have also been stuck with Mississippi State, a team from the powerful SEC and the Ohio Valley Conference champion, Austin Peay.

Let's go team by team and preview the regional this weekend.

The Yellow Jackets are one of the more well-rounded teams in the entire field. As a team, they have a .304 average, an incredible feat when you consider the toned-down new bats they are using in college baseball.

Offensively, they are led by table-setters Kyle Wren and Brandon Thomas, who both get on base at a great rate and can steal bases. Once they are on base, they are often driven in by Daniel Palka and Matt Skole who came in first and second on the team, respectively, in home runs and runs batted in.

Historically, finding consistency on the mound has been the biggest issue for Tech. That's not the case this season as they have a team ERA of 2.84.

Best case scenario- The Yellow Jackets get great starts out of Mark Pope, Buck Farmer and Jed Bradley and the offense holds up its end of the bargain as Georgia Tech goes undefeated and heads to the Super Regionals.

Worst case scenario- The Yellow Jackets drop their winners bracket game against either Southern Miss or Mississippi State and end up losing the regional as they will have to beat one team twice on the last two days, a tough task for any team.

The Golden Eagles had regional hosting hopes of their own until they stumbled a little bit down the stretch in conference play. They will provide a very strong two seed for the Yellow Jackets.

Southern Miss can hit with anyone as they have a .302 team average. The pitching is where they are a little suspect. The staff is top-heavy as closer Collin Cargill and ace Todd McInnis are as good as they come. Their depth is less than ideal, though, as there is a steep drop off after their top three or four guys.

Even their ace, McInnis, has been banged up with some injuries late in the season. They need him at full health to have any real hope of working their way out of this regional. Several guys on this team, including top home run hitter B.A. Vollmuth, were on the Southern Miss team that went to Omaha in 2009 and they will surely be anxious to get back.

Best case scenario- The Golden Eagles get a pair of great starts from McInnis and whoever else they choose to throw to get into the championship round where they patch the last game or two together with several pitchers to move on to the Super Regionals.

Worst case scenario- For whatever reason, the Eagles don't get a good start out of McInnis and they fall to the loser's bracket where even a team like Austin Peay could overcome the soft underbelly of the Southern Miss pitching staff.

The Bulldogs battled through an up and down season in the powerful Southeastern Conference and were rewarded with an at-large bid even though their overall record wasn't all that impressive. Their inclusion was likely at the expense of LSU, widely regarded as the last team left out of the field.

Nothing really pops out at you when you look at Mississippi State. They have a few hitters that had great seasons, but none that set the world on fire. Outside of star Jarrod Parks, no one hitter is hitting above .310.

If you had to pick their collective strength, it would be their pitching staff, but that strength is more about their depth that runs 10-deep rather than any one or two overpowering pitchers.

The Bulldogs are hoping their battle-tested personality will lead them through to the Super Regionals.

Best case scenario- The gauntlet that is the SEC season works well for the Bulldogs as they prove to be the toughest and most resilient team. They make it to the championship round of the regional where their depth in the pitching staff pays off as they can outlast their opponent (who may have had to play three or four games at that point) and move one step closer to Omaha.

Worst case scenario- The lack of a true ace in their starting rotation hurts the Bulldogs and they end up in the loser's bracket. Once there, they don't have the big boppers in their lineup to win high scoring games that inevitably occur in regionals once the pitching runs thin.

Austin Peay certainly seems like the latter. The Governors were the best team in the Ohio Valley Conference all season and then proved it again in the conference tournament.

They hit .306 as a team and have five different pitchers with ERAs at or around 4.00. Like with all teams seeded fourth, the question is always if they have enough talent to hang with the other teams for more than five or six innings.

Best case scenario- I think a loss to Georgia Tech in the opening game is inevitable, but after that, the Governors could get just enough starting pitching to allow their offense to compete and steal a win from whatever team falls to them in the loser's bracket.

Worst case scenario- The Governors get pasted in their opening game against the Yellow Jackets and don't have enough pitching to keep them from going 0-2 and exiting the tournament early.

Georgia Tech will roll through this regional relatively easily. The teams around them aren't going to be easy, but they have two or three real stars on the mound that should allow them to save the bullpen for the regional final against whoever navigates their way there.

Austin Peay will give someone a scare. I don't know that they win a single game, but they have way too much offensive talent to not play someone close.