MLB Power Rankings: The 20 Most Famous Fans of Baseball 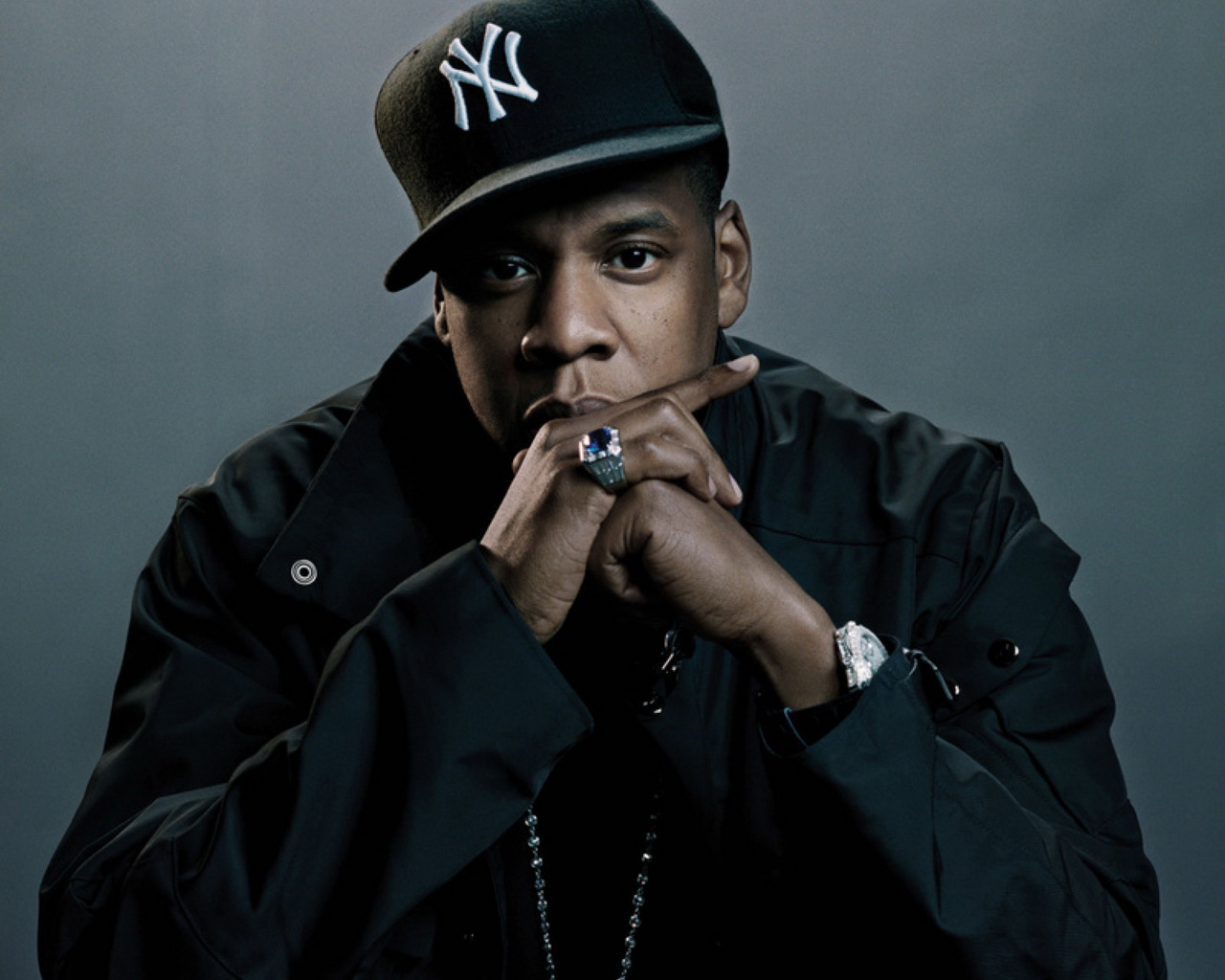 As America's favorite pastime, baseball has drawn a lot of fans.

Some of these fans are more dedicated to their team than others, however, and that's where this list comes in.

The following 20 fans are all some of the biggest, wildest, craziest fans out there.  From members of the famous Bleacher Creatures and Red Sox Nation, to well-known celebrities who have an undying passion for their teams, these 20 fans are the most famous in baseball.

Without further ado, here are the 20 most famous fans in baseball today. 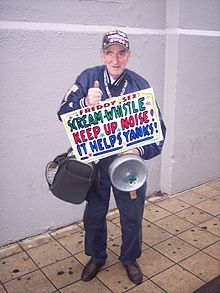 As an unofficial promoter, Schuman was famous for his bringing a frying pan with a shamrock on it, saying that it gave the Yankees luck.  Schuman would bring this pan and encourage other fans to bang on it.  One of his many pans is now in the Baseball Hall of Fame.

Schuman was also famous for his hand-crafted signs, which almost always began with: "Freddy sez."  The signs usually were saying something along the lines of: "They Yankees prove they are great again and again."

Schuman could be seen moving around the stadium during games, and he was one of the most famous fans of all time. 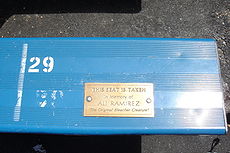 The Bleacher Creatures are the most famous fans in baseball, and Ali Ramirez is credited as their founder.

Ramirez died on May 8, 1996, but he was given tribute by the Yankees less than a week later, in a game when Yankees' pitcher Dwight Gooden pitched a no-hitter.

Ramirez was famous for his bringing a cowbell to Yankee games, similar to Freddy Schuman and his frying pan. 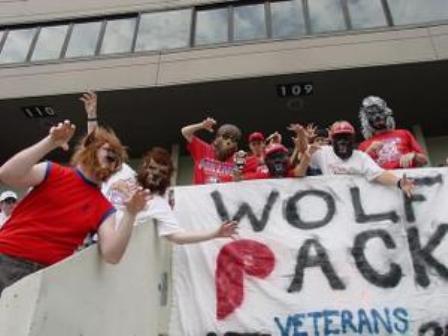 Randy Wolf built up quite a following in Philadelphia, where the Wolf Pack was born.  As you can see, several fans put on masks at games and howled whenever Wolf struck out a batter, retired a batter in anyway, ended an inning or whenever they felt like it.

The Wolf Pack has not completely dispersed now that Wolf is gone.  There is still a smaller pack that shows up for some of his games in LA, and whenever he pitches in Philly, the original Wolf Pack unites.

In Philly, the Wolf Pack assembled in the upper deck above right field and decked out their area in signs, banners, etc.  During their "glory days," the Wolf Pack even followed the Phils when Wolf was due to pitch.  The Wolf Pack was a big group in Philadelphia, and they still play a minor role.

Ryan Howard is the best power hitter for the Philadelphia Phillies, and he has built himself a following too.

Howard's Homers is a group of people who show up to Phillies games with Homer Simpson masks on.  This group can be seen at many games in Philadelphia, although they have not traveled around as the Wolf Pack did.

Howard's Homers is currently the most famous group of Phillie fans. 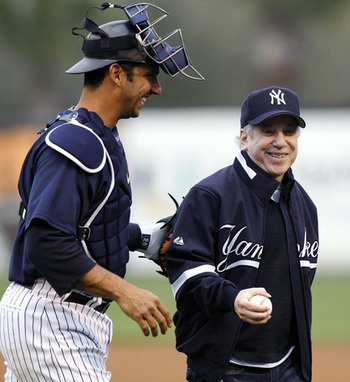 Paul Simon is famous for his work in Simon and Garfunkel in 1965.  Simon is also a huge Yankee fan, and he has publicly shown his enthusiasm for the team multiple times.

Simon proposed to his second wife at a Yankee game.  He has rooted for the team his entire life, and Simon is definitely a diehard Yankee fan. 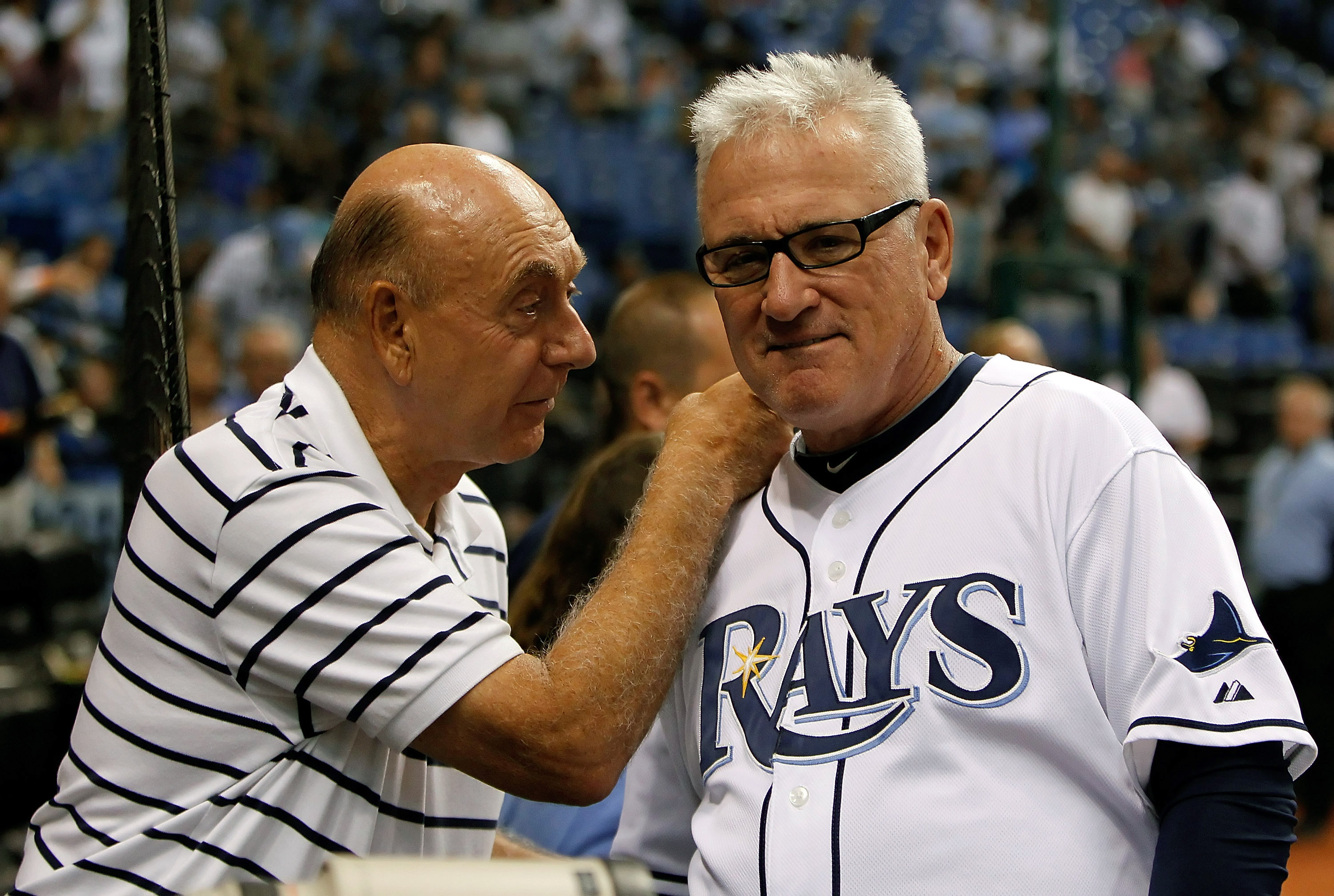 Dick Vitale thinks the Rays are "awesome baby!"  Vitale is arguably the most famous college basketball expert in the world, and he is also a Tampa Bay Rays fan.

Vitale reportedly has season tickets to Tampa Bay's games.  Vitale has loved the Rays for quite a while now, and he remains a fan, despite being hit hard in the ribs by a foul ball.

While other fans are content to just watch the games, Dickey V also leads cheers, and he has done this in the postseason many times, including in Game 7 of the 2008 ALCS against Boston. 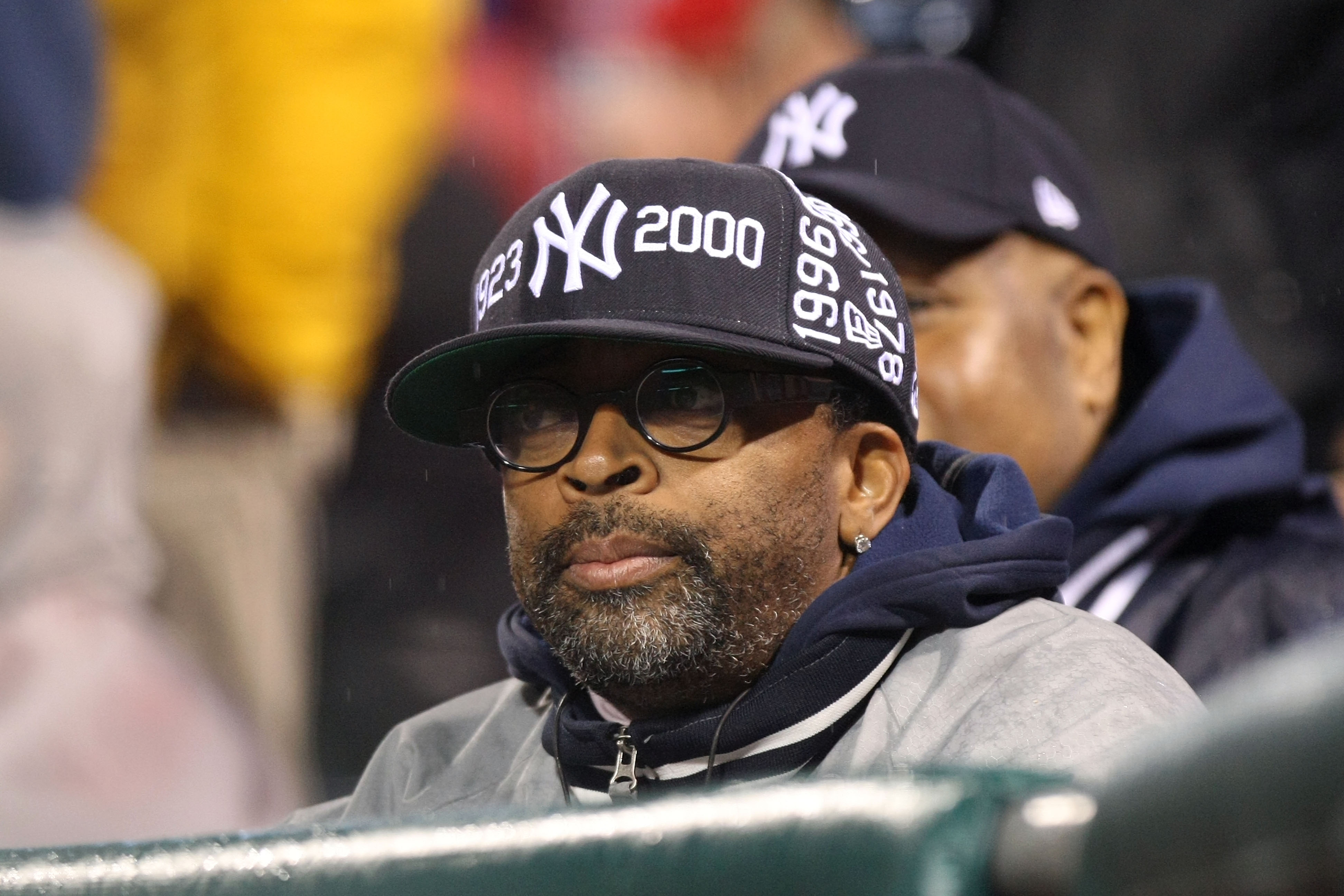 Lee follows all New York teams (besides the Mets) passionately, and the Yankees are no exception.  Lee even created a New York Yankees hat, listing the years of their World Series wins (pictured). 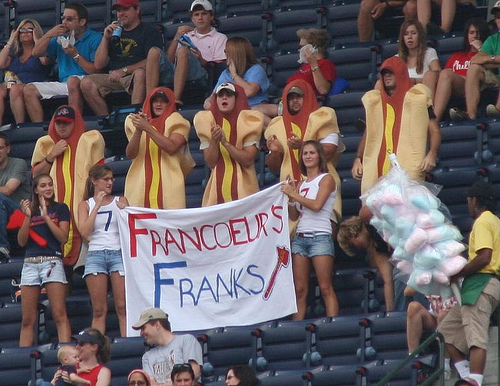 Jeff Francoeur built up his own following in his time in Atlanta, the Francoeur's Franks.

Dressed in hot dog costumes, these fans were a big attraction at the ballpark for obvious reasons.  Francoeur was beloved during his time in Atlanta, and most Braves fans will forever remember his fan club.

These fans are still awaiting Francoeur coming back, and they will not give up hope. 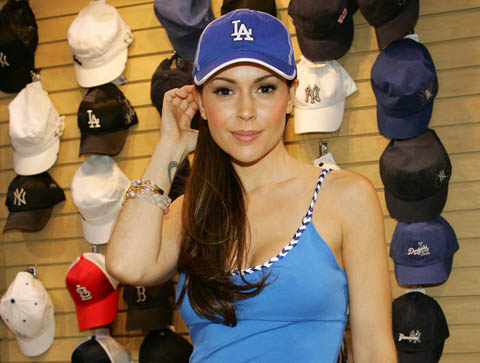 The famous actress of Charmed, Alyssa Milano is a huge baseball fan.  Milano's family is made up of New York Met fans, and she roots for them, but she also loves the Los Angeles Dodgers.

Milano supposedly has season tickets for the Dodgers, and she has loved the game since she was a young girl.

Believe it or not, Milano has even published multiple books on baseball, including “Safe at Home: Confessions of a Baseball Fanatic.” 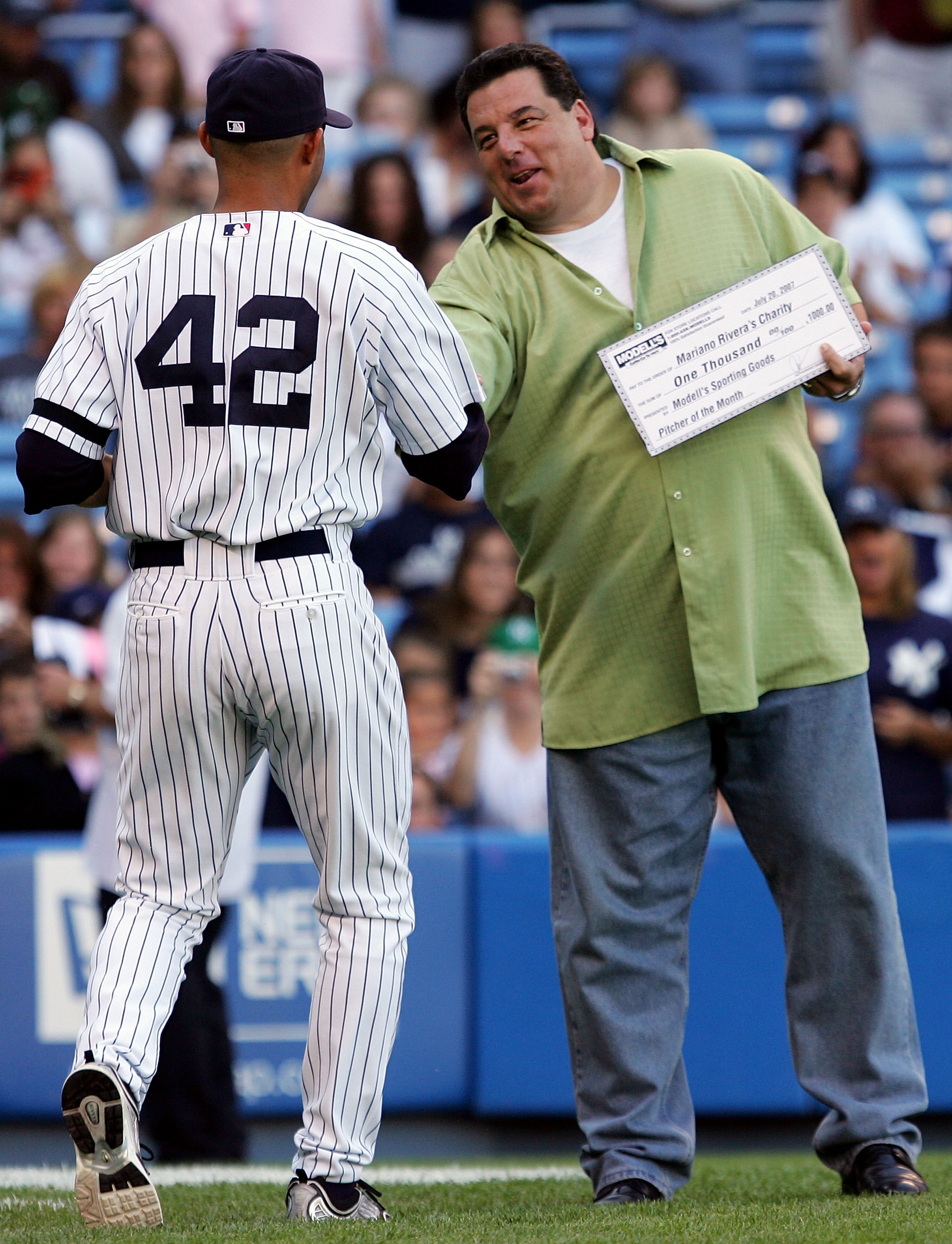 Steve Schirripa, actor featured on many television shows including his series, Nothing Personal, is a true Yankees fan.

Schirripa is often seen at Yankees games, and he is becoming a well-known face behind the plate.  Schirripa has repeatedly shown his dedication to his beloved Yankees, and he continues to do so. 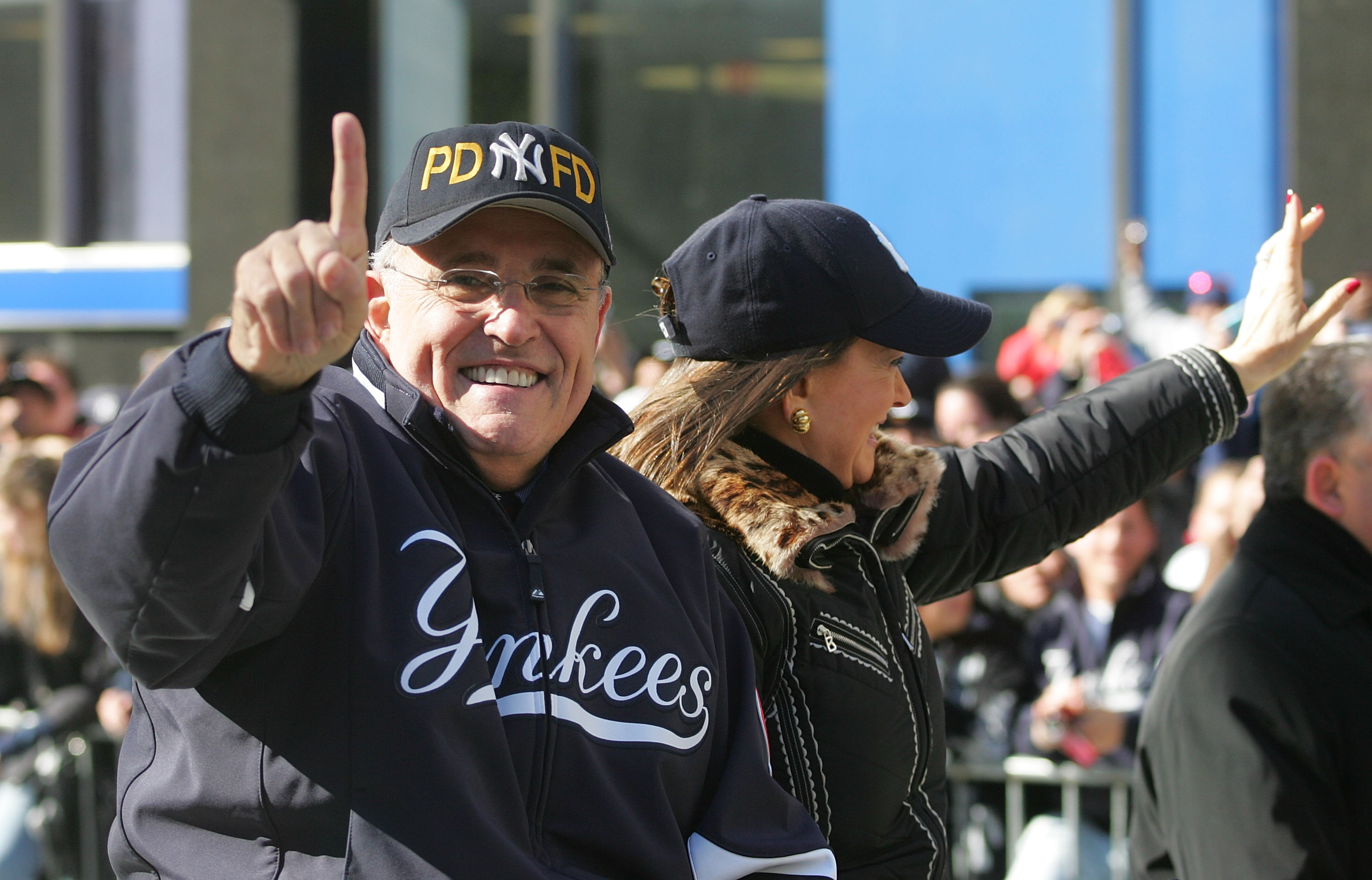 America's Mayor's blood bleeds blue for the Yanks, and he is one of the most well-known fans of the Yankees.  Giuliani has tickets right beside the Yanks' dugout, and he is still in attendance for games now that he is in office.

Giuliani makes time in his busy schedule for his beloved Yanks, and he is one of New York's biggest fans. 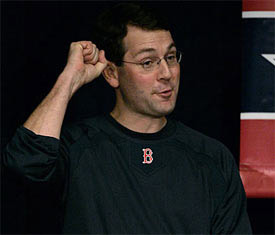 Crawford is the official Vice President of Red Sox Nation.  As a true group, even selling membership and having requirements for "citizens," Red Sox Nation is the most organized group of fans in the country.

Next to the head of this group, Crawford is known by most Red Sox fans, and he and the current President have already changed the face of Red Sox Nation. 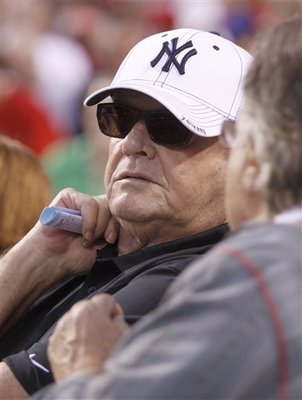 Jack Nicholson is an outright Yankee fan for sure.  Nicholson has said on multiple occasions that he is a big fan of the Yanks.

Nicholson may be known best for being an LA Laker fan, but he is almost as big a fan of the Yankees, landing him in the top 10. 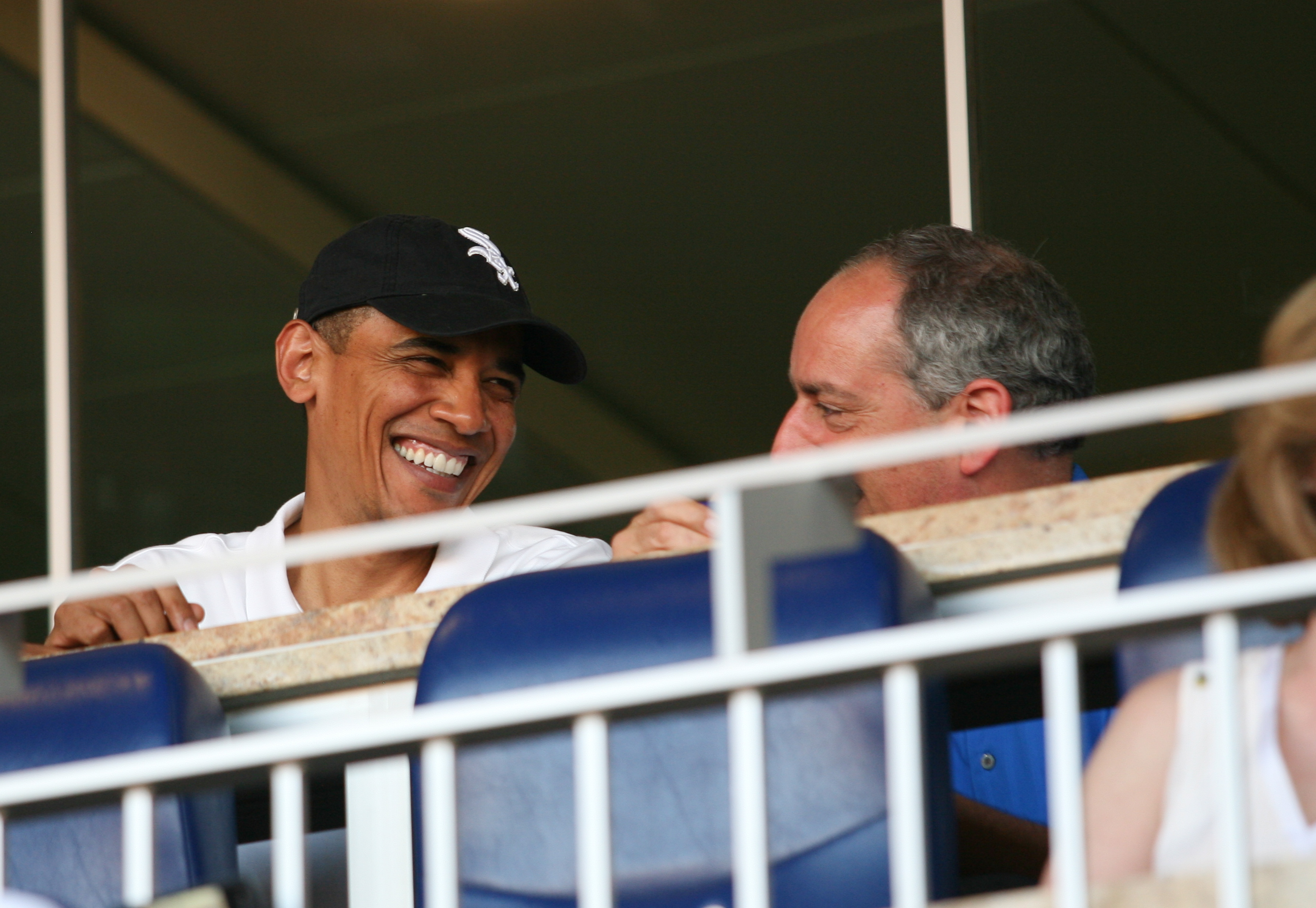 While he is known more for his love of college basketball, the Commander in Chief is also a White Sox fan.

Barack Obama has been seen at many White Sox games, and White Sox fans brag about having the most well-known fan in all of baseball rooting for their team.

While he has not been able to attend as many games as of late, there's no denying the fact that he has loved the South Siders since he was just a boy. 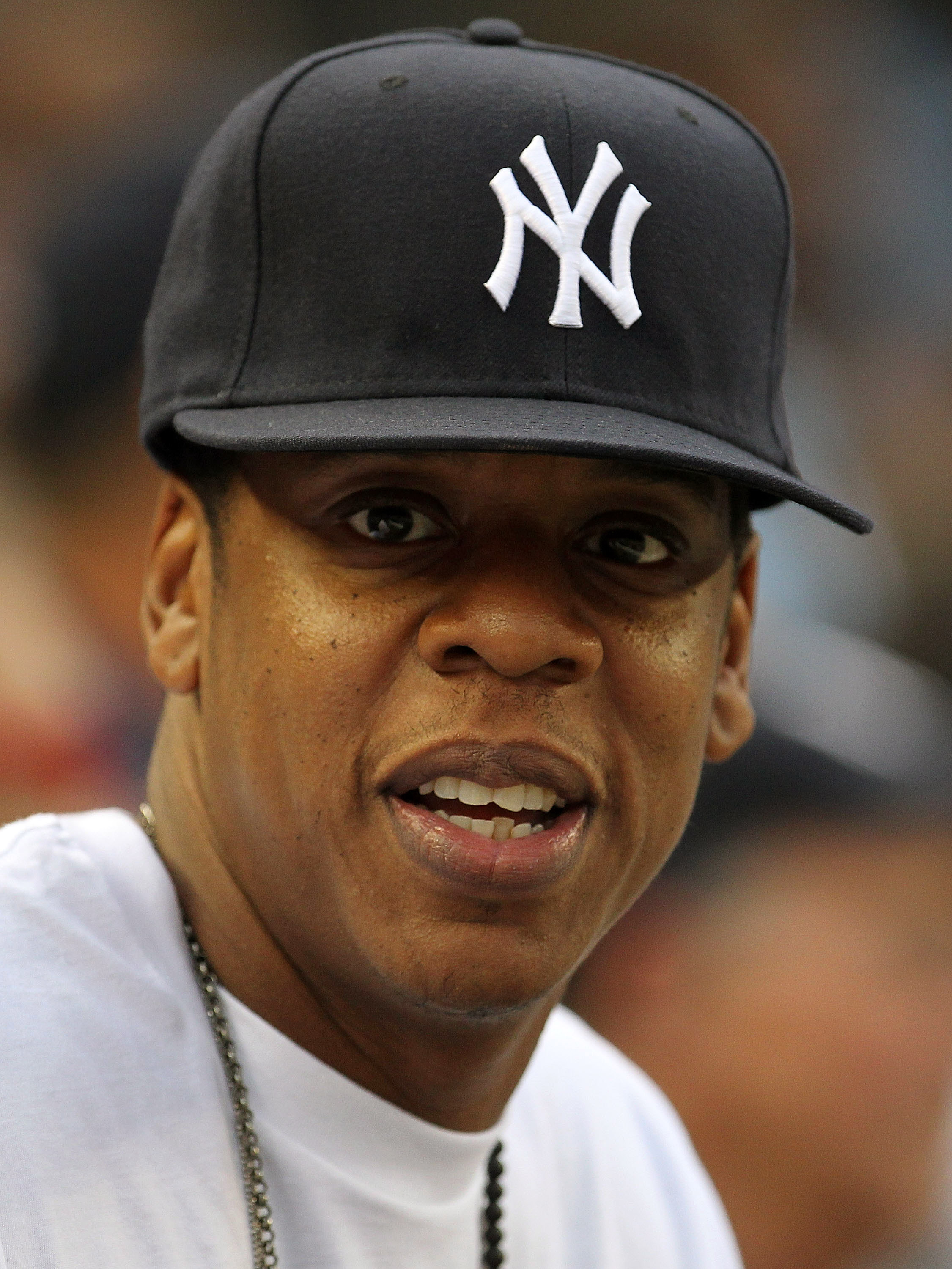 Jay-Z is a huge Yankees fan, and we all know it.  Jay-Z has been seen at innumerable Yankee games over the last few years, and he even wrote their unofficial theme song in 2009, Empire State of Mind.

Jay-Z has "made the Yankee hat more famous than a Yankee can," and he has always been a huge fan. 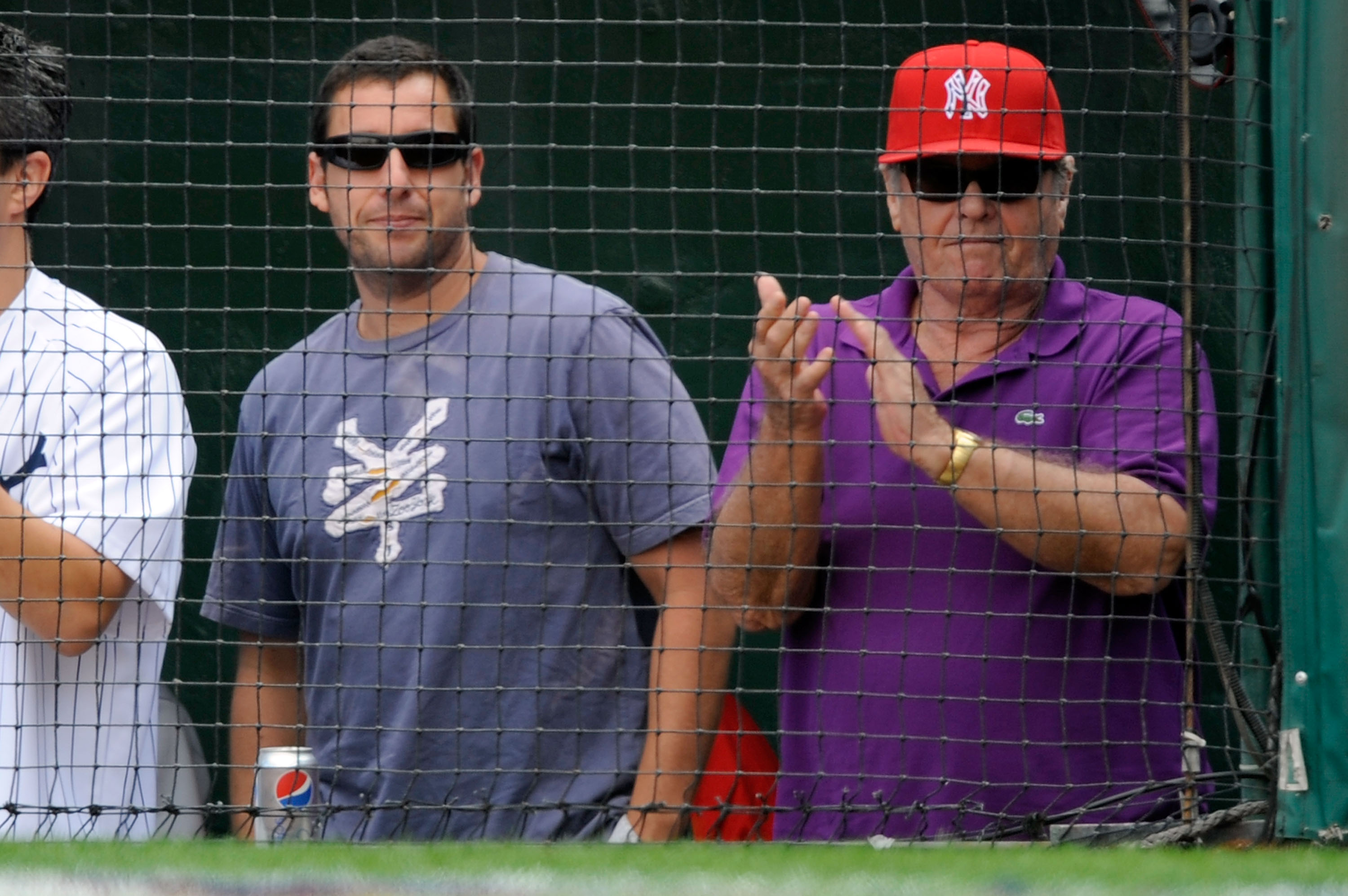 Adam Sandler is a huge Yankee fan.  The second half of Anger Management has made the list, and he is a good one.

Sandler has mentioned hi love of the Yankees in many of his movies, and he continues to root for the Yanks both in real life and in his movies. 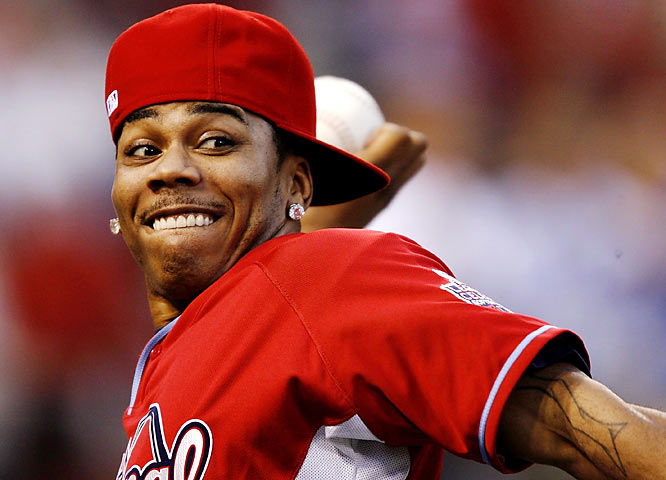 Nelly is the biggest Cardinals fan out there.  Nelly was born and raised in St. Louis, and he can usually be seen with some sort of Cardinals apparel on.

Nelly's love of the Cards brought him to film one of his music videos at Busch Stadium, which included a Cardinal player in it (Fernando Vina).

Nelly always has and always will love the Cards, and through thick and thin, he has stuck by them his whole life. 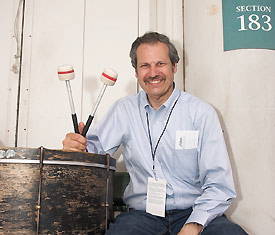 John Adams work for AT&T, but he is known best for being the drummer of the Cleveland Indians.

Adams brought a bass drum to a game in 1973, a game in which the Indians won.  Ever since that day, Adams has played the drum at every game he can attend all the way up in the bleachers in left field.

In his 37-plus seasons of drumming for the team, Adams has only missed 34 games.  To put that in perspective, in well over 6,000 games, Adams has missed less than one-half percent of the games. 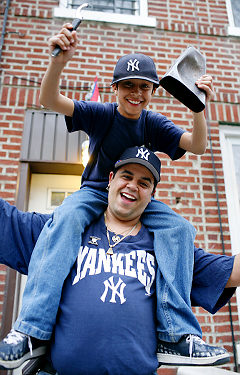 After the death of Ali Ramirez, the bell was given to Milton Ousland.  As the "official" cowbell man, no one else may bring a cowbell to the game.

The cowbell is primarily used to initiate a chant during a Yankees rally.  Ousland will hit the cowbell until he is given attention, and he will then play a few notes, during which the Creatures will pick up, joining in with claps.

The "official" cowbell man is important during any game with Bleacher Creatures and is therefore in the top five on this list. 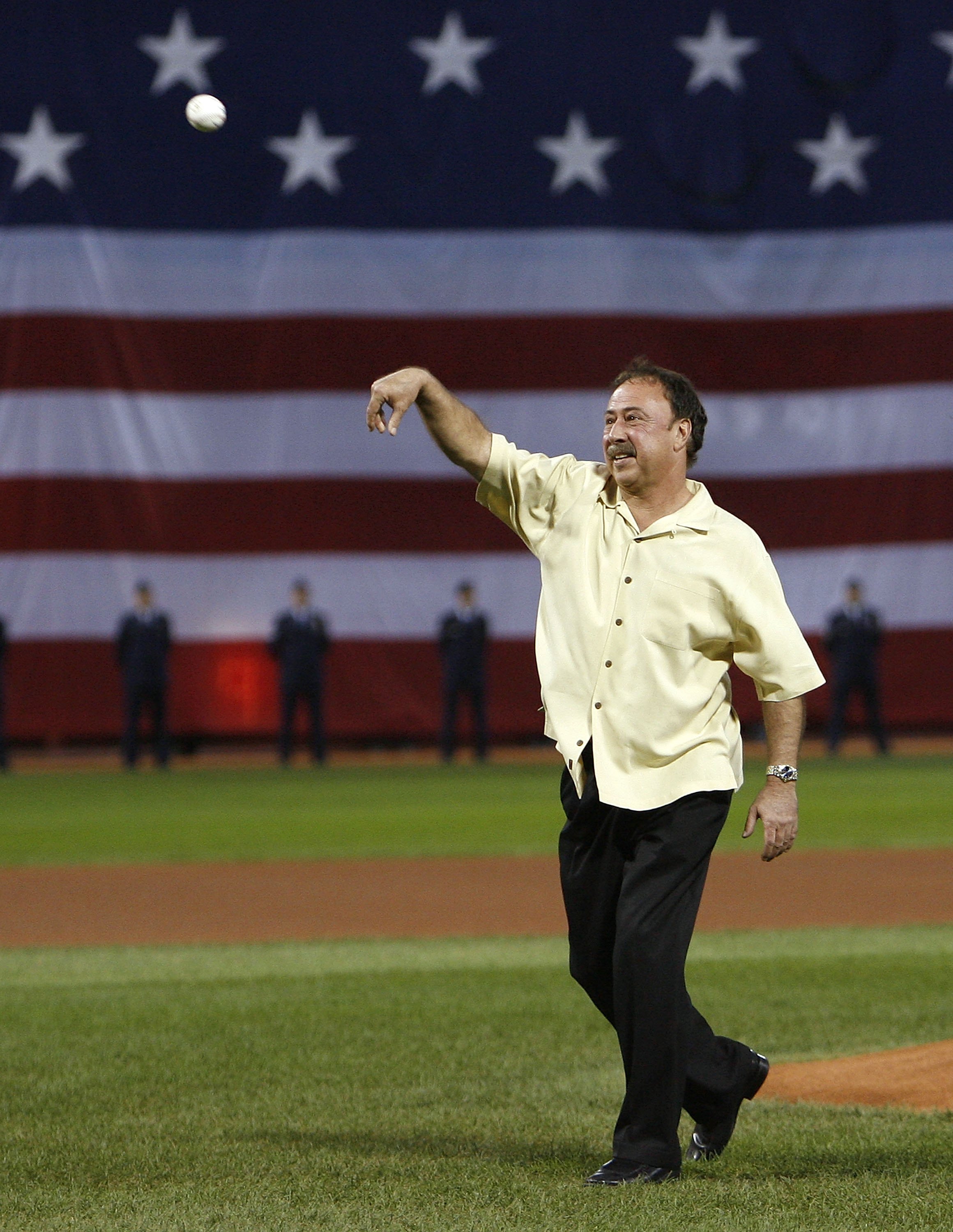 Jerry Remy is the official President of Red Sox nation.  Remy was elected into office in early October of 2007, and was then given the chance to throw out the first pitch in the Red Sox' playoff series (pictured above).

Remy and his VP "Regular Rob" Crawford established a five-point plan after being elected into office to guide their first year.  While I won't go into detail about the plan, I can say that it worked well, and the two are still in office today. 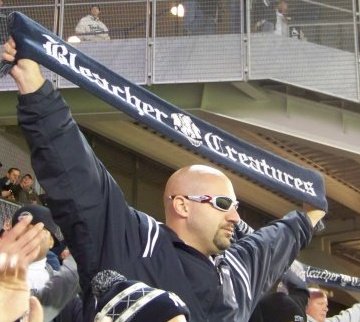 Milano will somehow settle down the Creatures, and then he will shout to a player, starting with the center fielder.  The Creatures then join in until the player acknowledges them.  Some acknowledge them with a point, others like Nick Swisher salute them.

The Roll Call was called the best thing in baseball by Jason Giambi, and there could not be one without Bald Vinny. 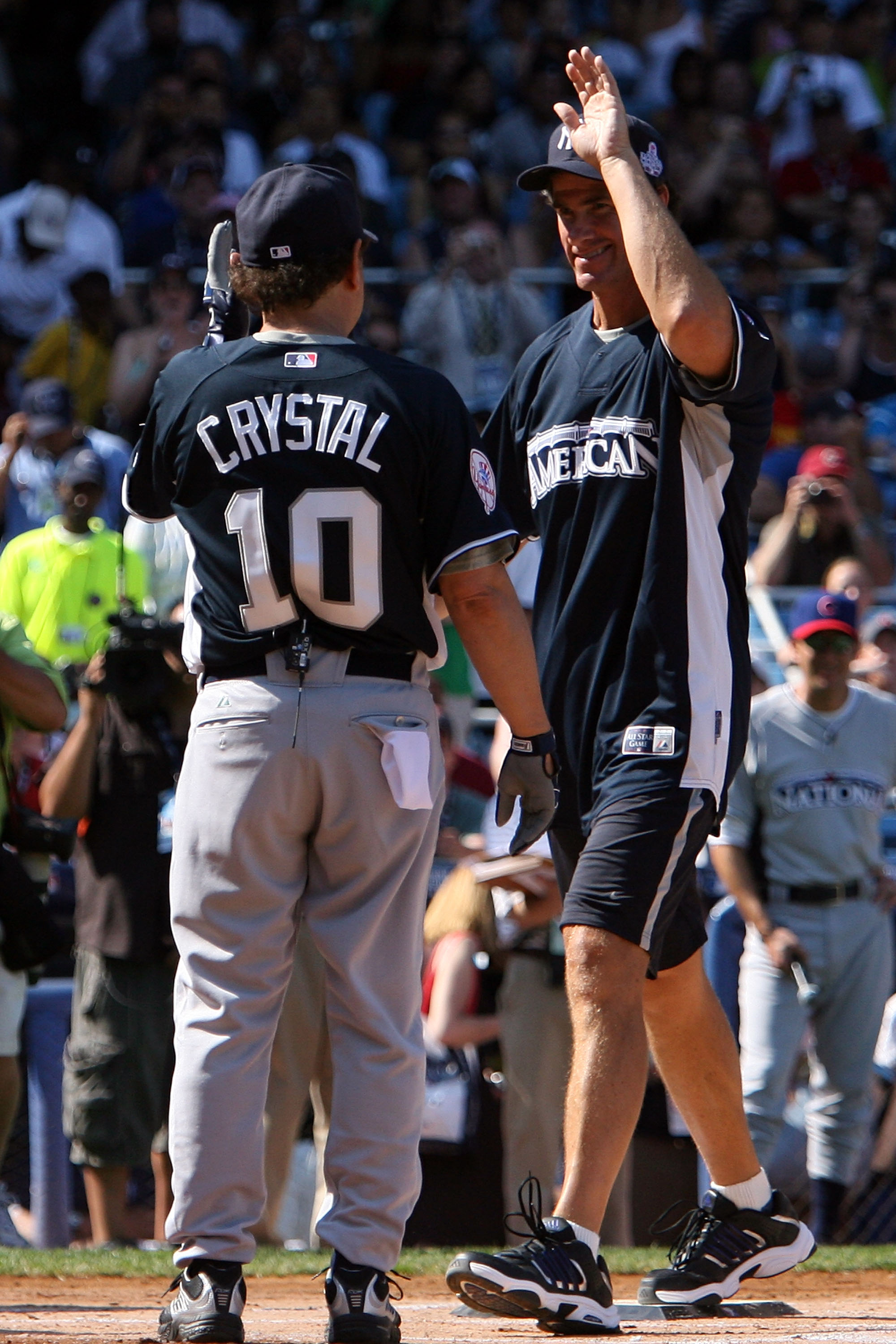 The well-known actor and comedian is arguably the most famous, devoted Yankee fan on the planet.  Crystal has loved the Yankees his entire life, and he has taken his love of the team one step farther than any other fan.

Crystal's love of the team led to sign a one-day contract for a Spring Training game with the Yankees.  Crystal's dedication to the Yankees is unheard of, and he is well-dereving of the number one spot on this list.