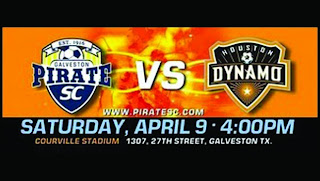 A few times in a lifetime, an opportunity presents itself to prove you have what it takes to compete with the big boys. Saturday is one of those occasions for the players of Galveston Pirates as they face up to MLS Houston Dynamo Academy side.

As the MLS side gets the new season off and running, their Academy side is like any other in the world of football, bringing through the best young stars from around the state in the hope of providing the senior squad with players to improve the playing 11 on the field.

As Galveston prepare themselves for the HFA season ahead, this is an excellent test of their metal and an expertly timed morale boost for coach Brendan Keyes and his players.

The more competitive and professionally run HFA will prove to be a stern test for the Pirate side as they look to keep improving as a team and increase their fan base within the Galveston Island area.

This match will help increase awareness of the soccer side in the area and hopefully build a larger fanbase for the Pirate side as they look to increase visibility of soccer in the city.


Pirate coach Brendan Keyes sees this as ideal preparation for the forthcoming HFA season and after already defeating them once in their short lifespan, the coach will be hopeful of a similar result.

"This is a great chance for our players to prove their worth against a top class side. We have recently joined the HFA leagues which will prove to be a much better test for us than the SPSL we were playing in previously. This match against the Houston Dynamo Academy side will prove just how far we have came in a very short space of time."

Speaking of his short tenure in charge of the Galveston soccer team he said, "We have came a long way in a very short space of time, and it has had its ups and downs along the road. After losing our top scorer half way through the season to long time rivals, Regals FC, we bounced back and as we transgress through the uncertain soccer ocean, we find ourselves stronger at every turn. This matchup against the Dynamo is just another step in the right direction for us."

Dynamo Director of Youth Development James Clarkson said, "Galveston is a strong club. They are a good, organized team, who have done well in their league. This is a good opportunity for our team to play against a strong club, especially with the competition we are going to face shortly in the Dallas Cup."

The game kicks off at 4 p.m., Courville Stadium, Galveston. be there or miss out on the biggest soccer game in the City to date!