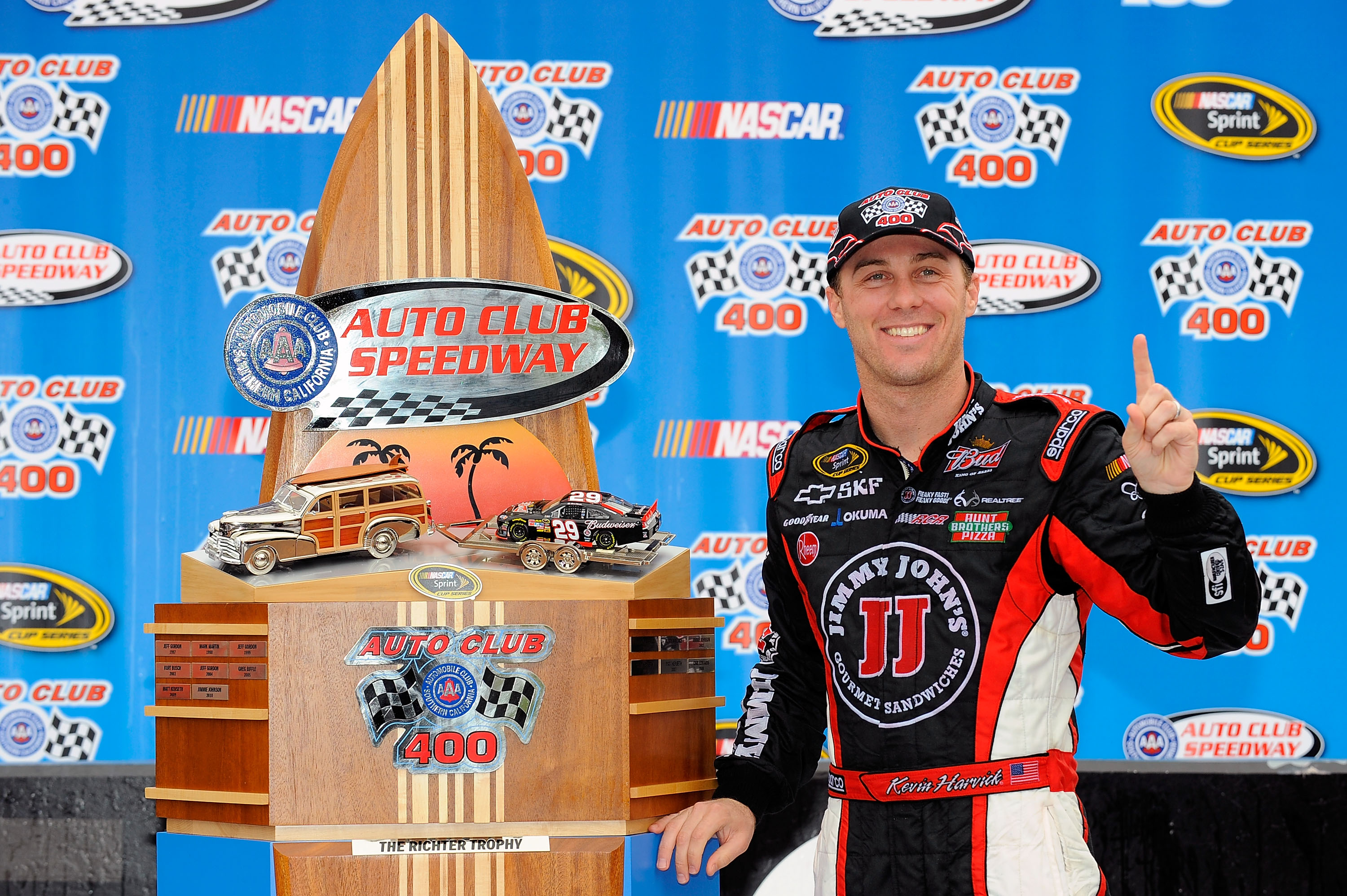 I've never been a fan of NASCAR racing at the Auto Club Speedway. The 500-mile races are too long and the weather is, for some reason, always terrible. That may work for some racing series, but it sure doesn't for Sprint Cup.

But with his last-lap pass of five-time defending series champion Jimmie Johnson, Kevin Harvick brought some badly-needed excitement to a racetrack that's still struggling to find its niche in the sport.

The cars and stars of Sprint Cup now head out of the super speedway at Southern California to the polar opposite of both: the paper-clip short track of Martinsville. Who's hot heading to NASCAR's oldest track? Read on. 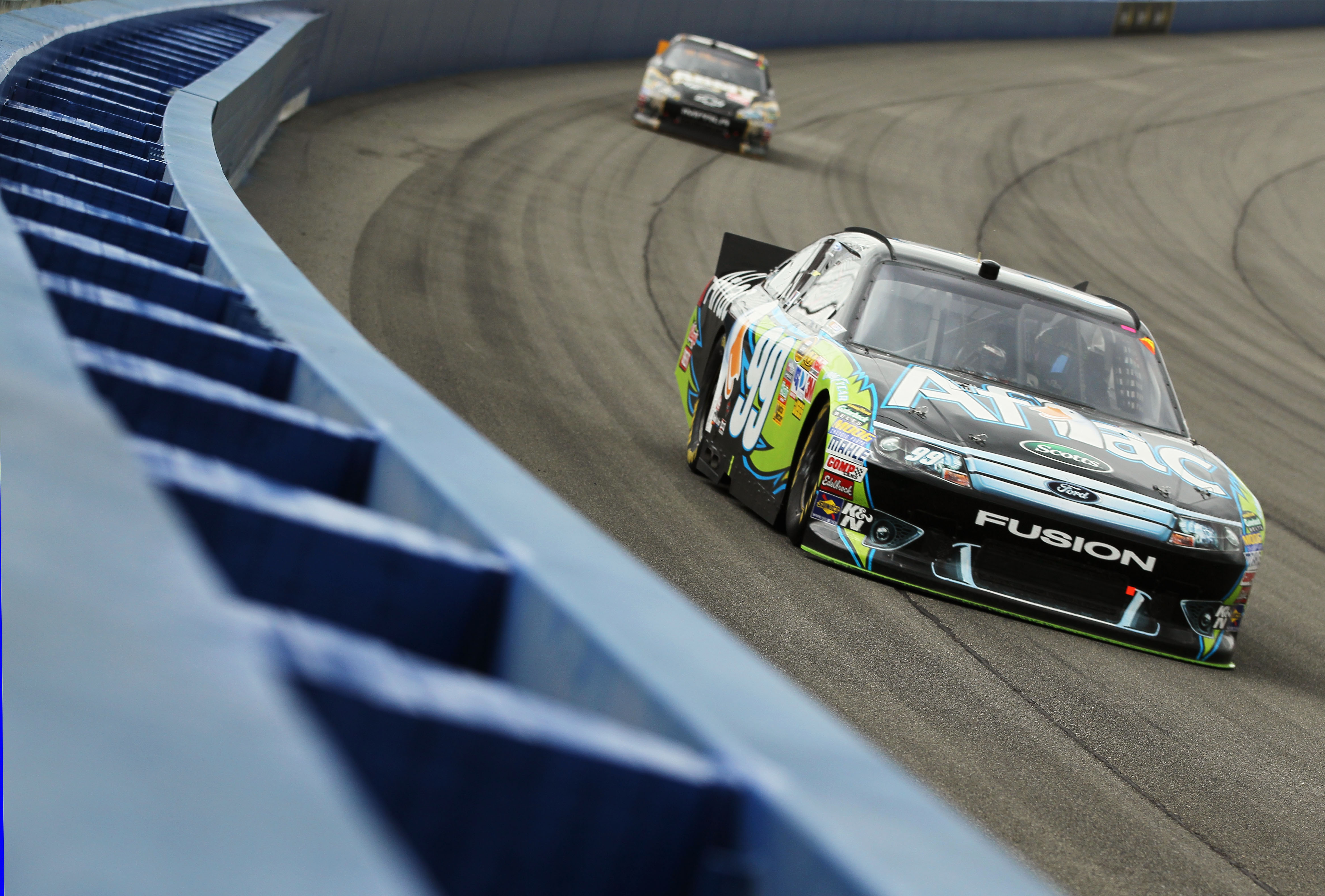 Edwards is starting to get into the double digits with his lead right now. That means that folks are either going to need to finish 10 or more positions ahead of him, or win and take a lot of bonus points. And if he keeps finishing where he has, that's not too easy to conceive. 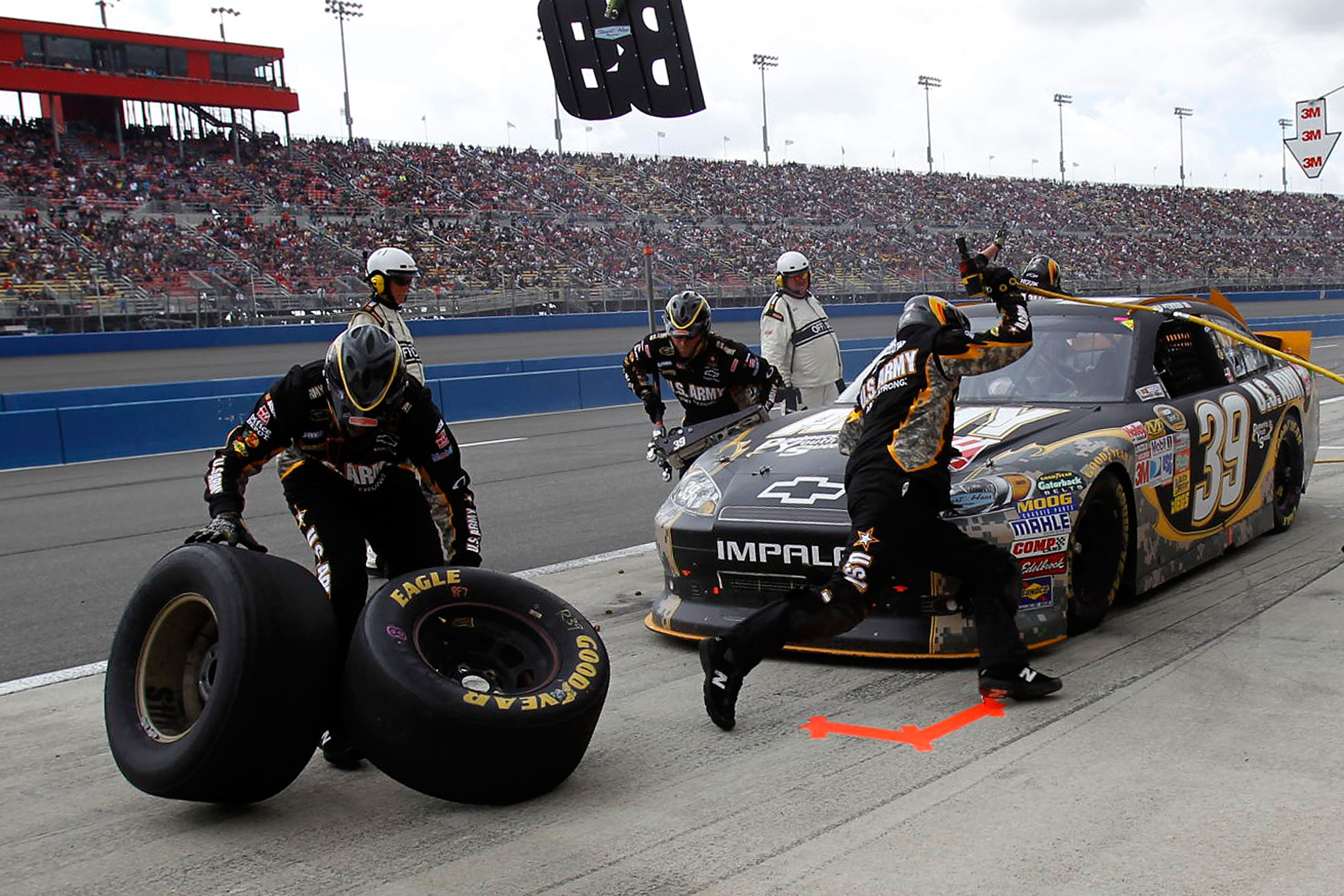 Remember in 2003, when Newman won eight races but lost the title to Matt Kenseth, who won only a single event very early in the season? Well, Newman looks to be trying out the Kenseth strategy this year. It could very well work if a certain someone slows down. 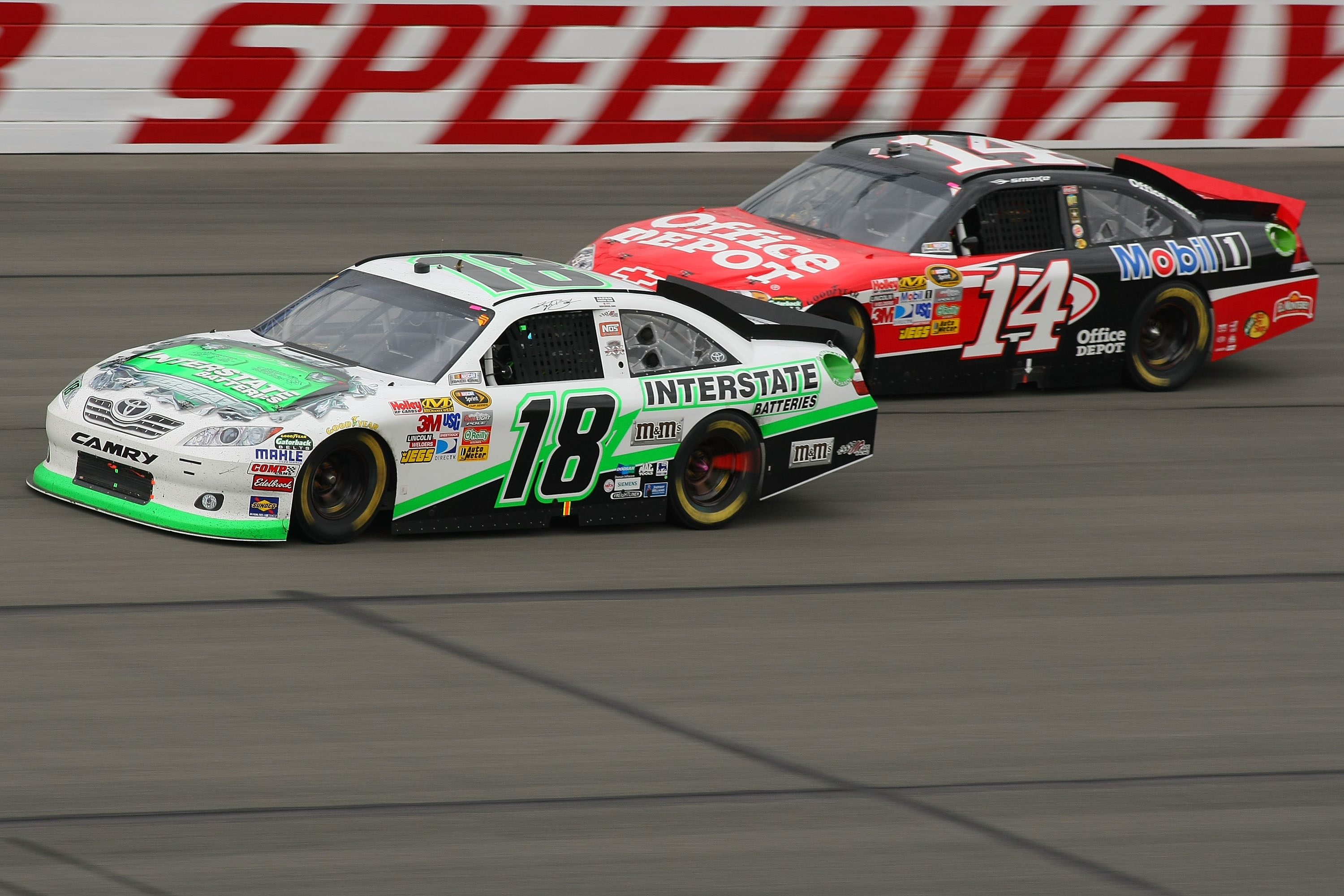 Folks are saying that Rowdy still lacks the maturity to win a championship. I'm not so sure. His change in demeanor this season has been nothing short of mercurial, going from a bad boy to a media darling. The married life must be calming him down. 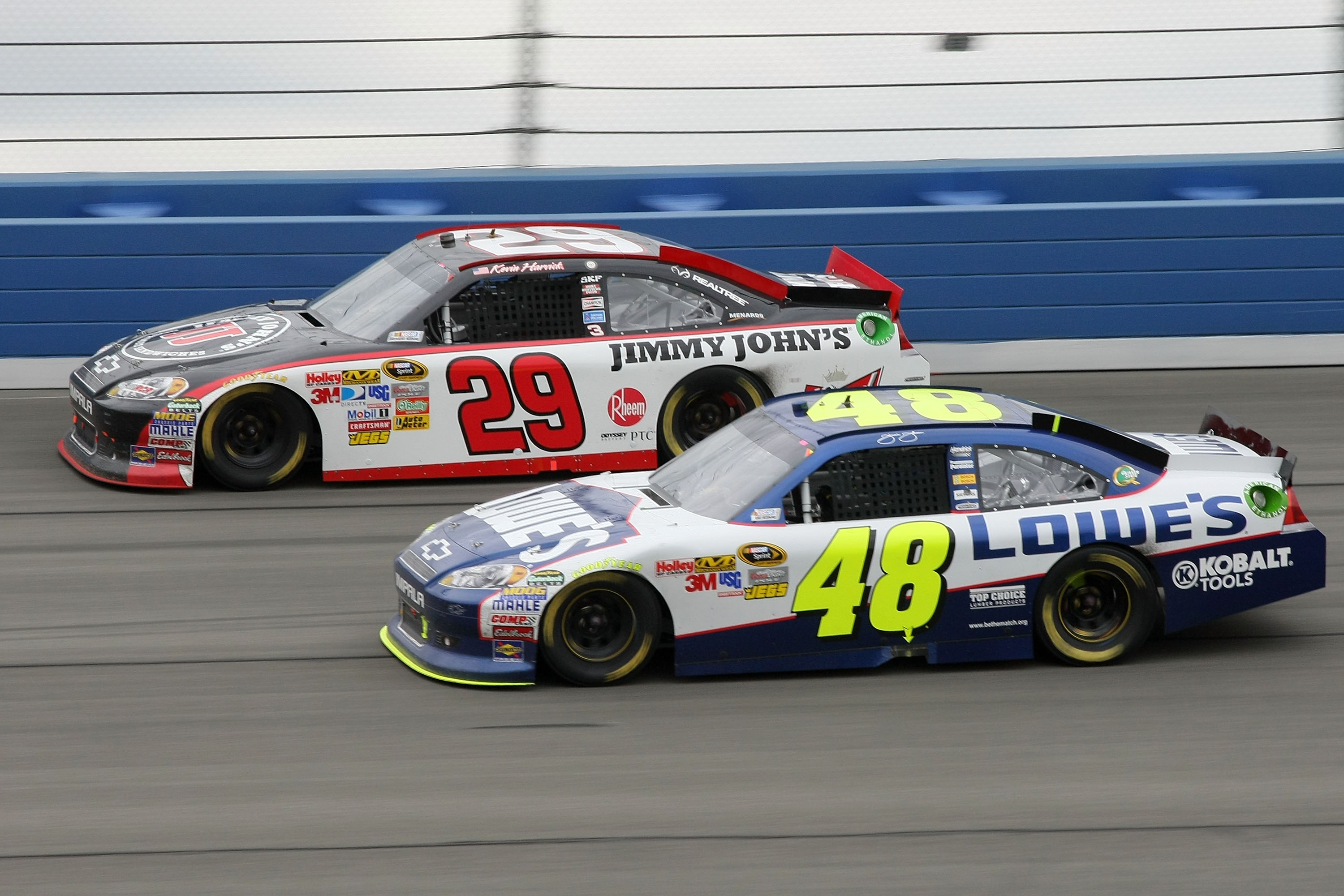 I used to think that Johnson owned this track. Now I'm not so sure. Kevin Harvick just might have dislodged the horseshoe from JJ's rear bumper on the backstretch during that last lap. 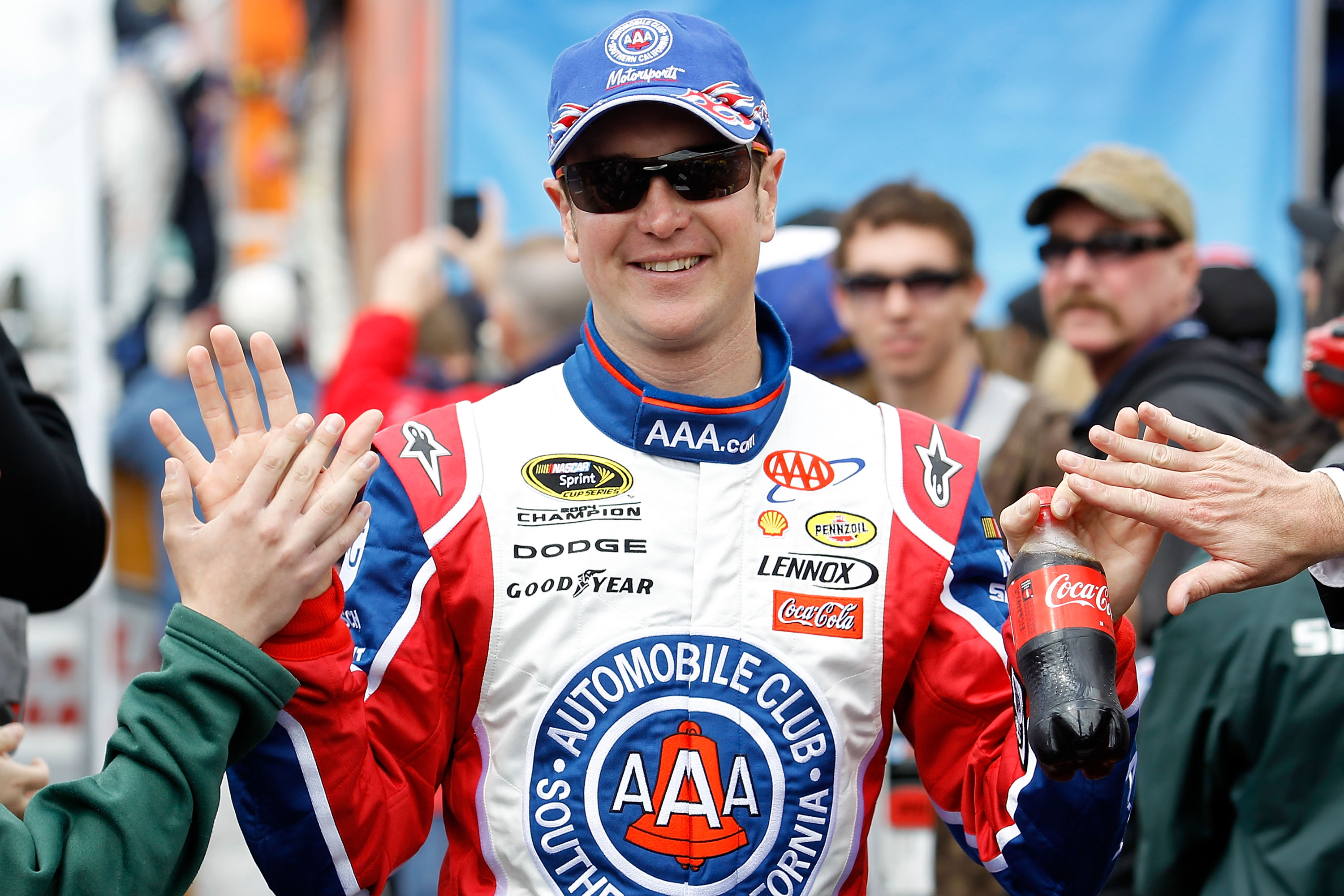 Consistency is key. Like last year, Busch seems likely to start hot and drop down the standings the further he goes, given the 17th place finish on Sunday. But he's been consistent enough to maintain a top-three points position for most of the season. 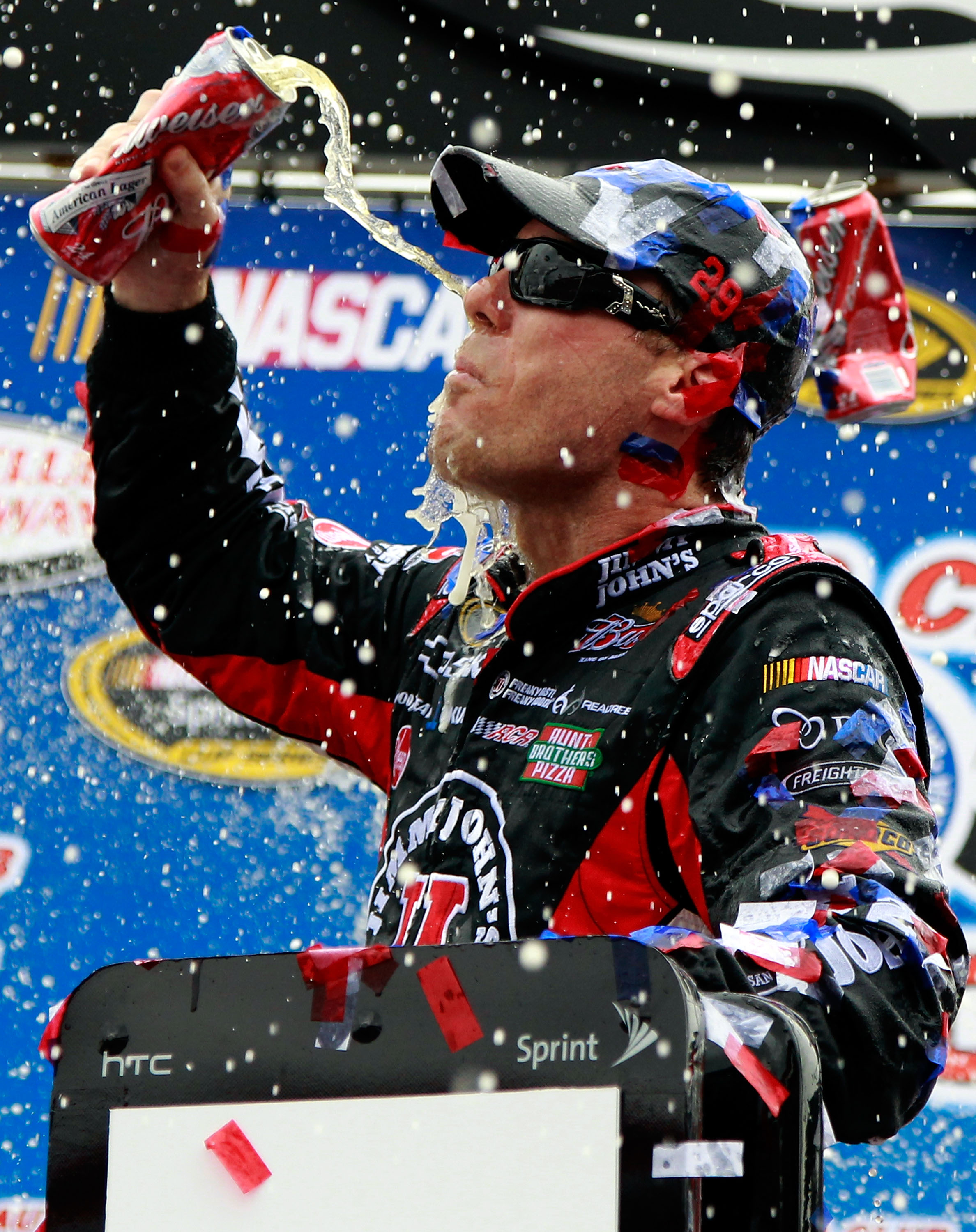 Pundits have been calling Harvick "the best closer in the business." I wonder if San Francisco Giants closer Brian Wilson, whose team was once affiliated with the minor-league squad in Harvick's hometown of Bakersfield, was paying attention to that. I also wonder if Harvick is a baseball fan. 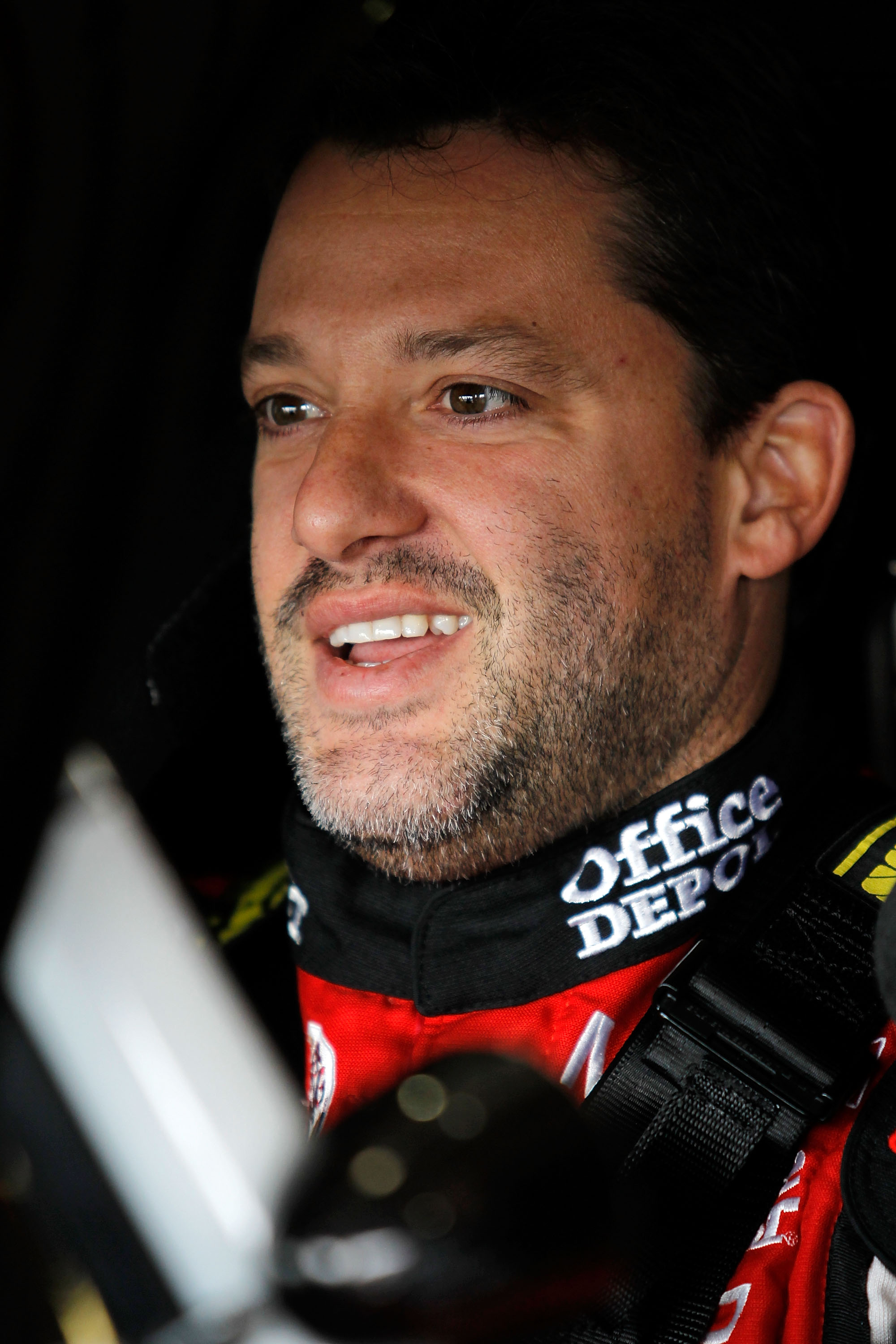 After slipping from second to 13th in the late stages of the race, and then refusing to talk with any reporters after getting out of the car, this may have been the only happy photo taken of Smoke all day. No doubt, he thought he could win that race. 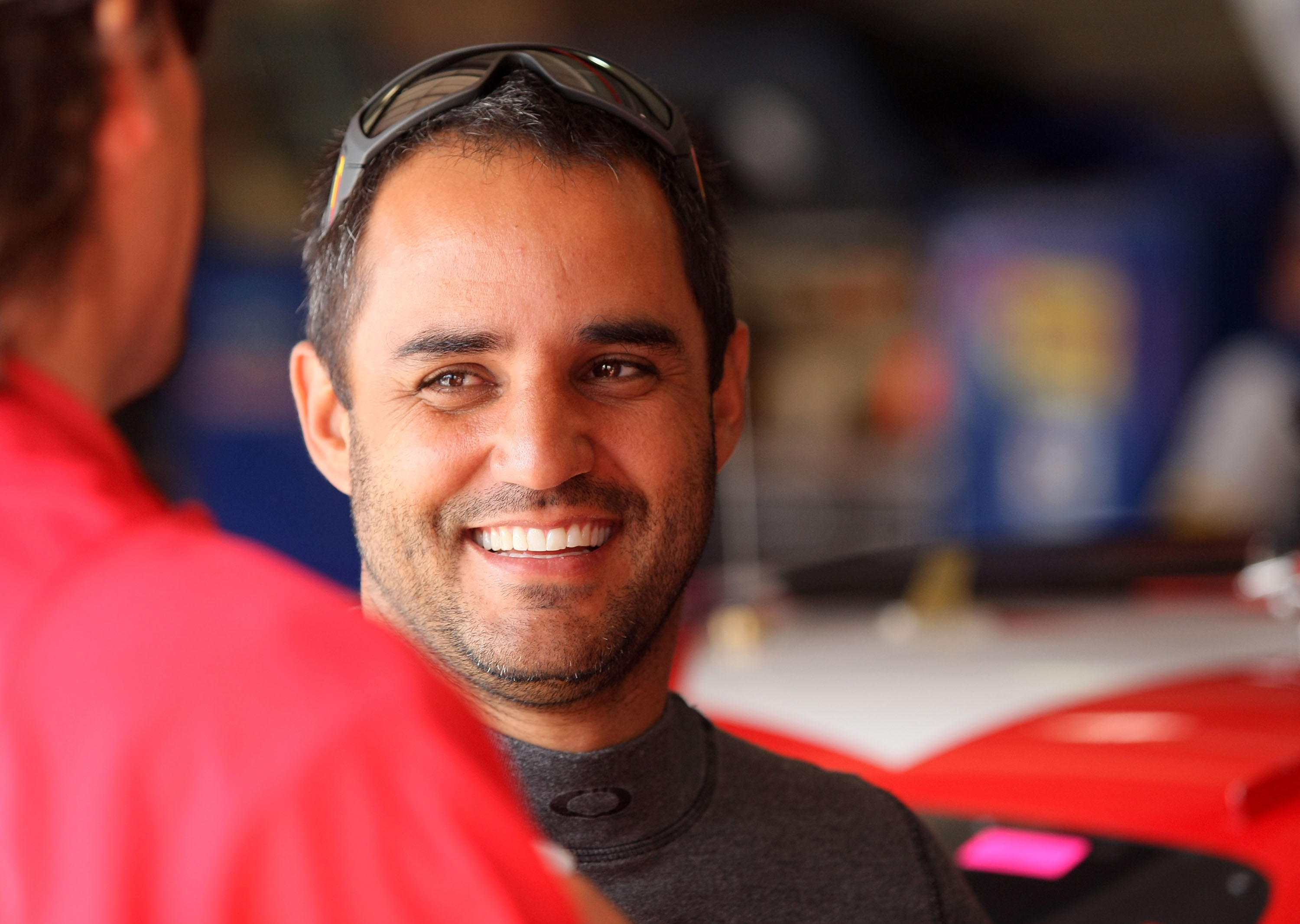 With the level of consistency he's been showing thus far this year, think of Montoya as your Chase-sleeper candidate. Remember, he's done this sort of thing before, and when he finally made it there, he started tearing the circuit up. Don't be surprised if it happens again; staying cool and collected early may be the recipe for success for the normally fiery Montoya. 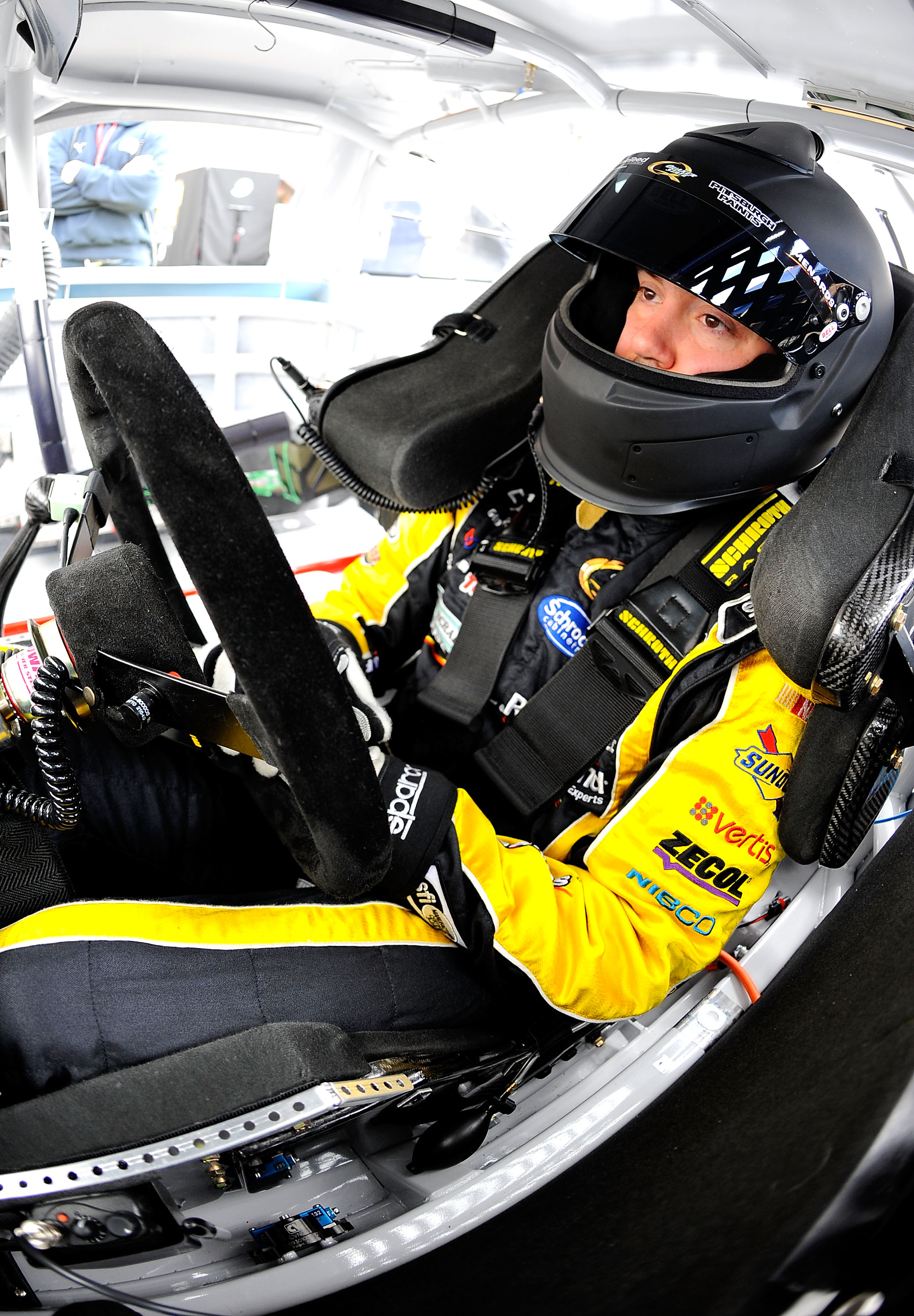 It finally looks like Richard Childress Racing got the four-car concept right. Menard's really been surprising thus far this year. Then again, we said that at this point last year, when he drove for Richard Petty Motorsports, and look what happened. 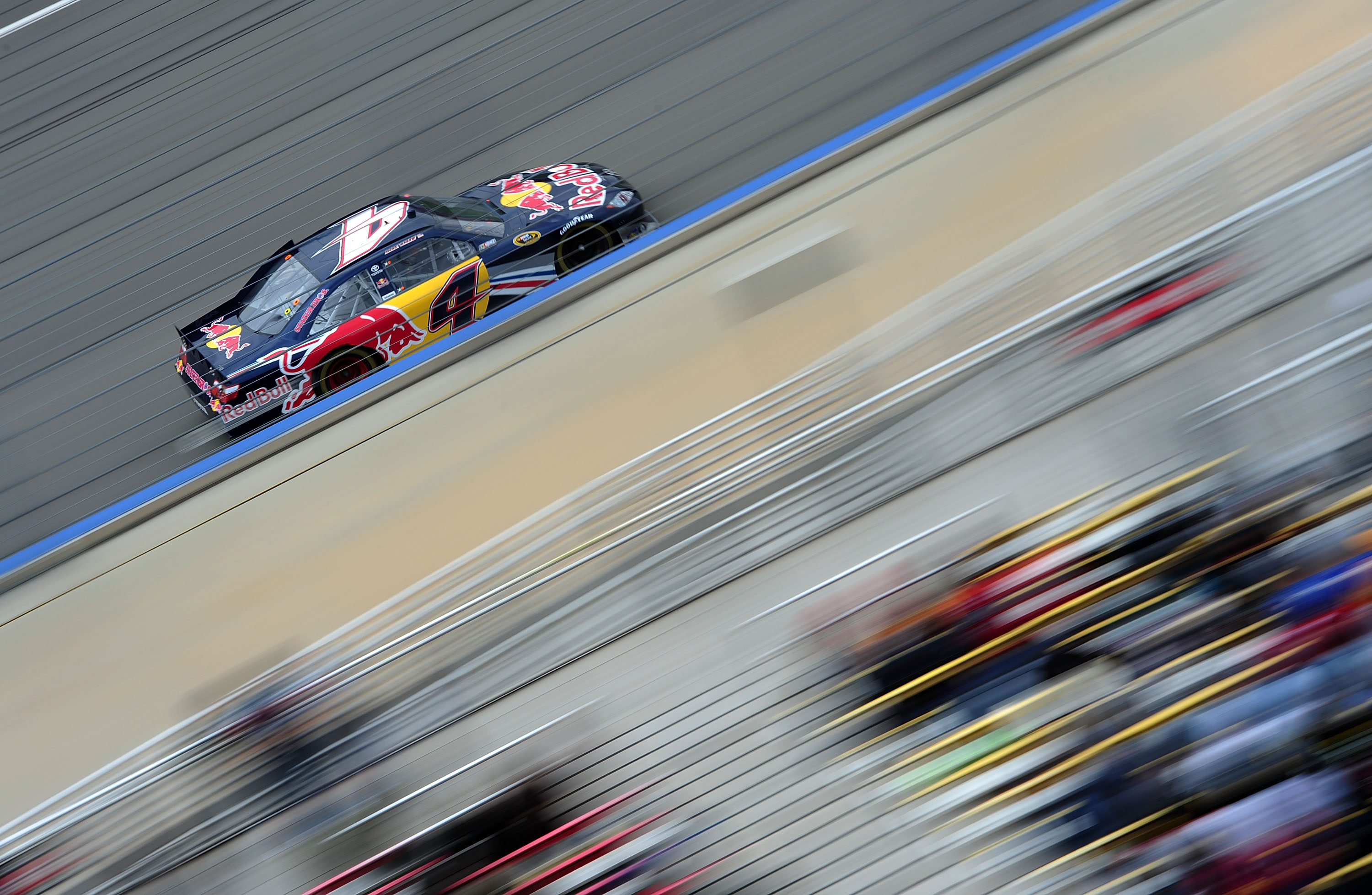 I wonder if Team Red Bull is going to ask corporate to send money from Austria so they have a shot at buying out Kahne's contract with Hendrick Motorsports next year. Stranger things have happened. Remember the whole Jamie McMurray-signing-two-years-in-the-future fiasco of 2005? 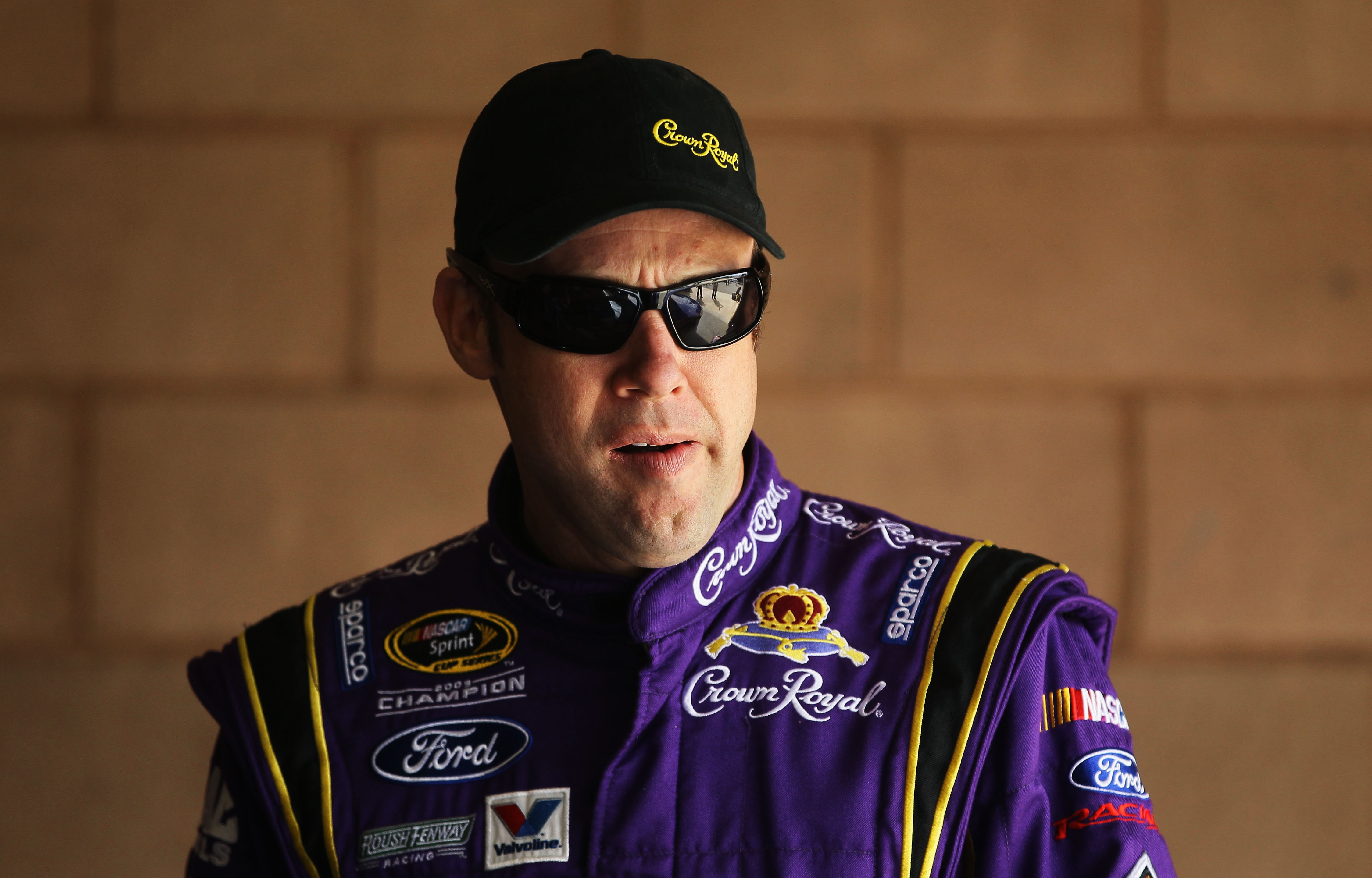 Hey, uh, Matt, anytime you want to lead laps and win a race, I'll start moving you up the rankings. Sure, two top fives are nice, but you remember what Ricky Bobby said: "If you ain't first, you're last." 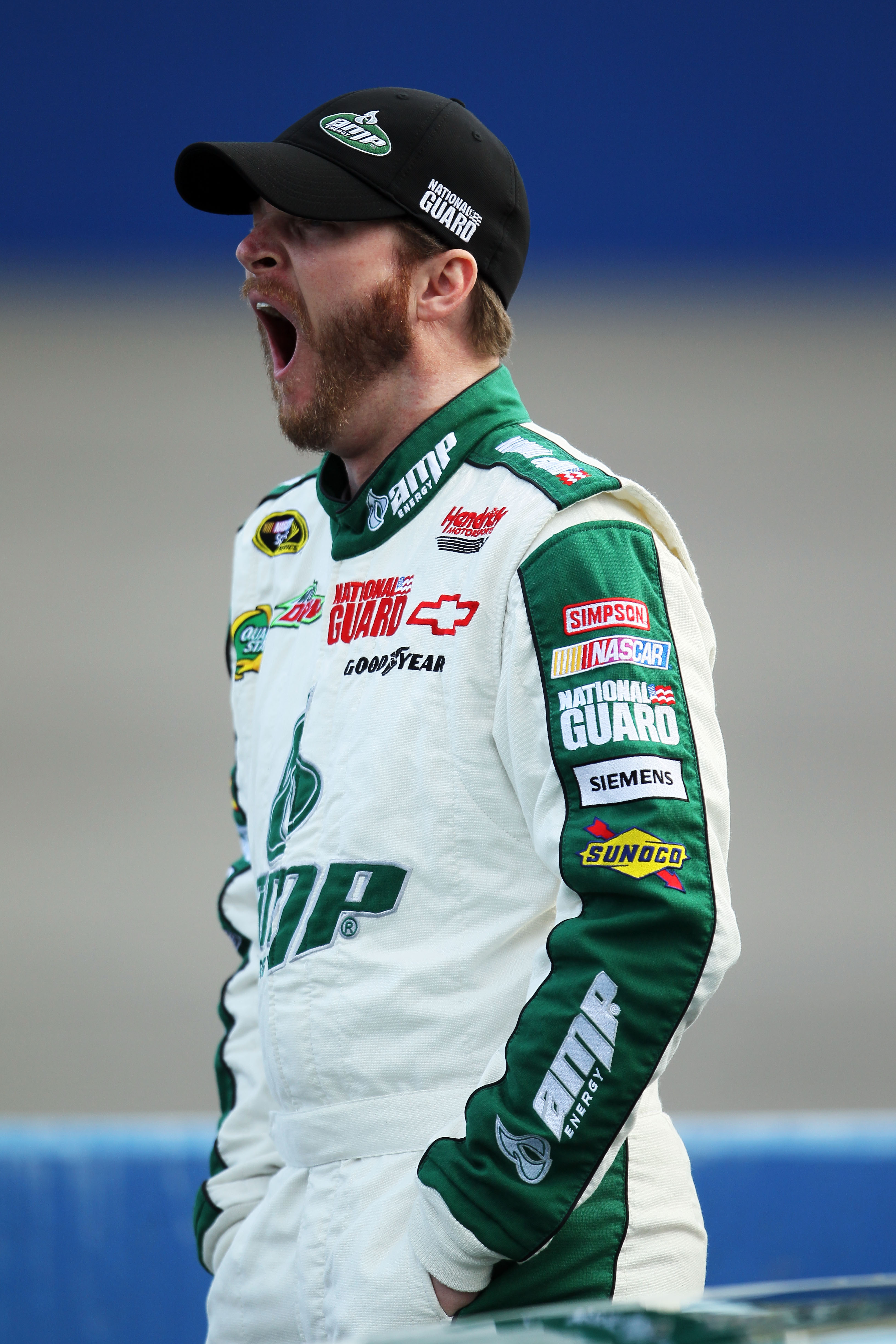 Qualifying 30th? No big deal, we'll just finish a respectable 12th...and lose three spots in the standings. That's the one thing I dislike about this year's points. I feel like we're going to see these position changes more frequently than ever. 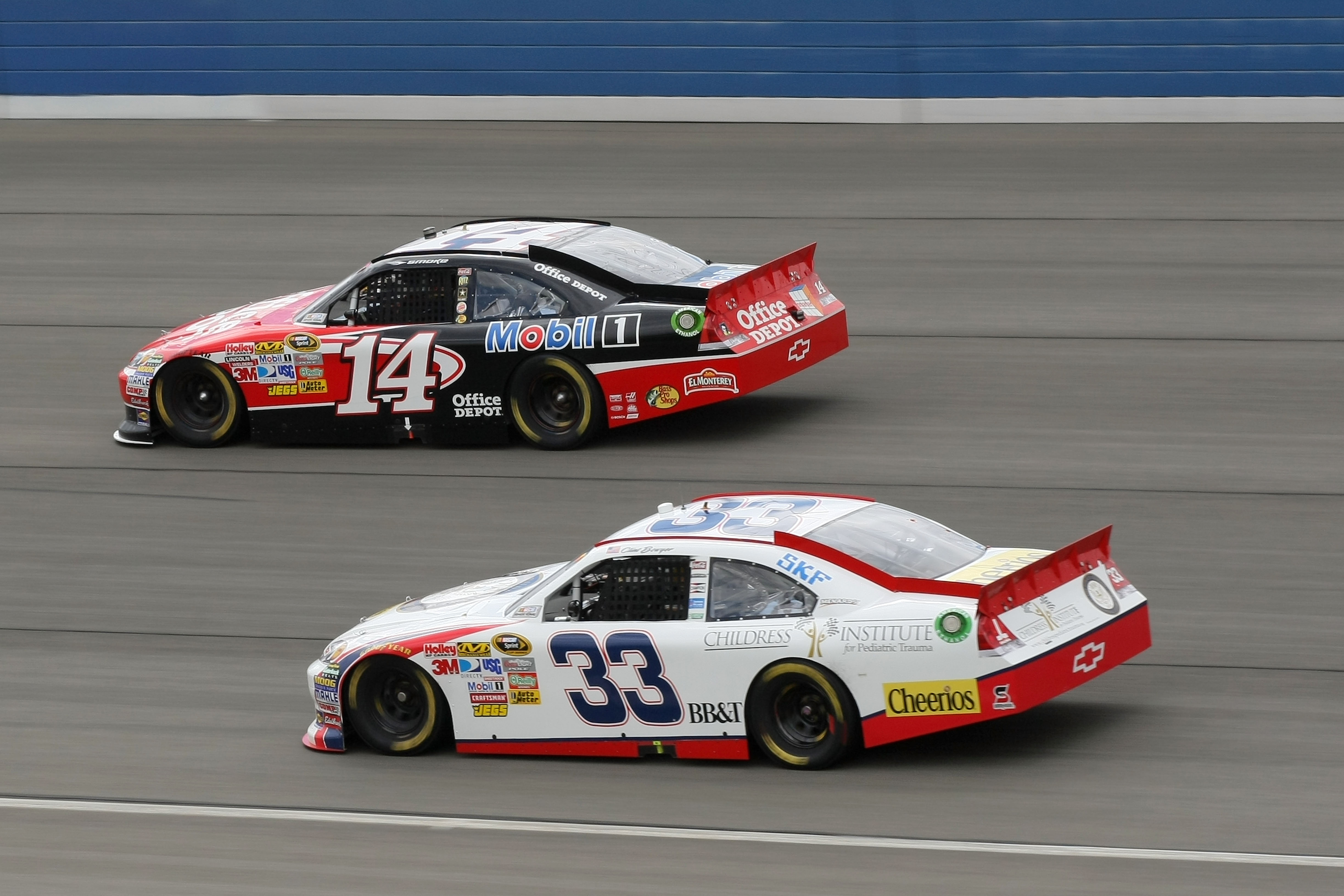 Clint had the Ronald Reagan Presidential Foundation Centennial on the hood this weekend and the Childress Institute for Pediatric Trauma on the quarter panels. The same organizations will pair to sponsor owner Richard Childress' grandson, Austin Dillon, in his Sprint Cup debut later this season. One piece of advice: Please make the quarter-panel decals legible next time. It looks to me like Clint's driving for free. 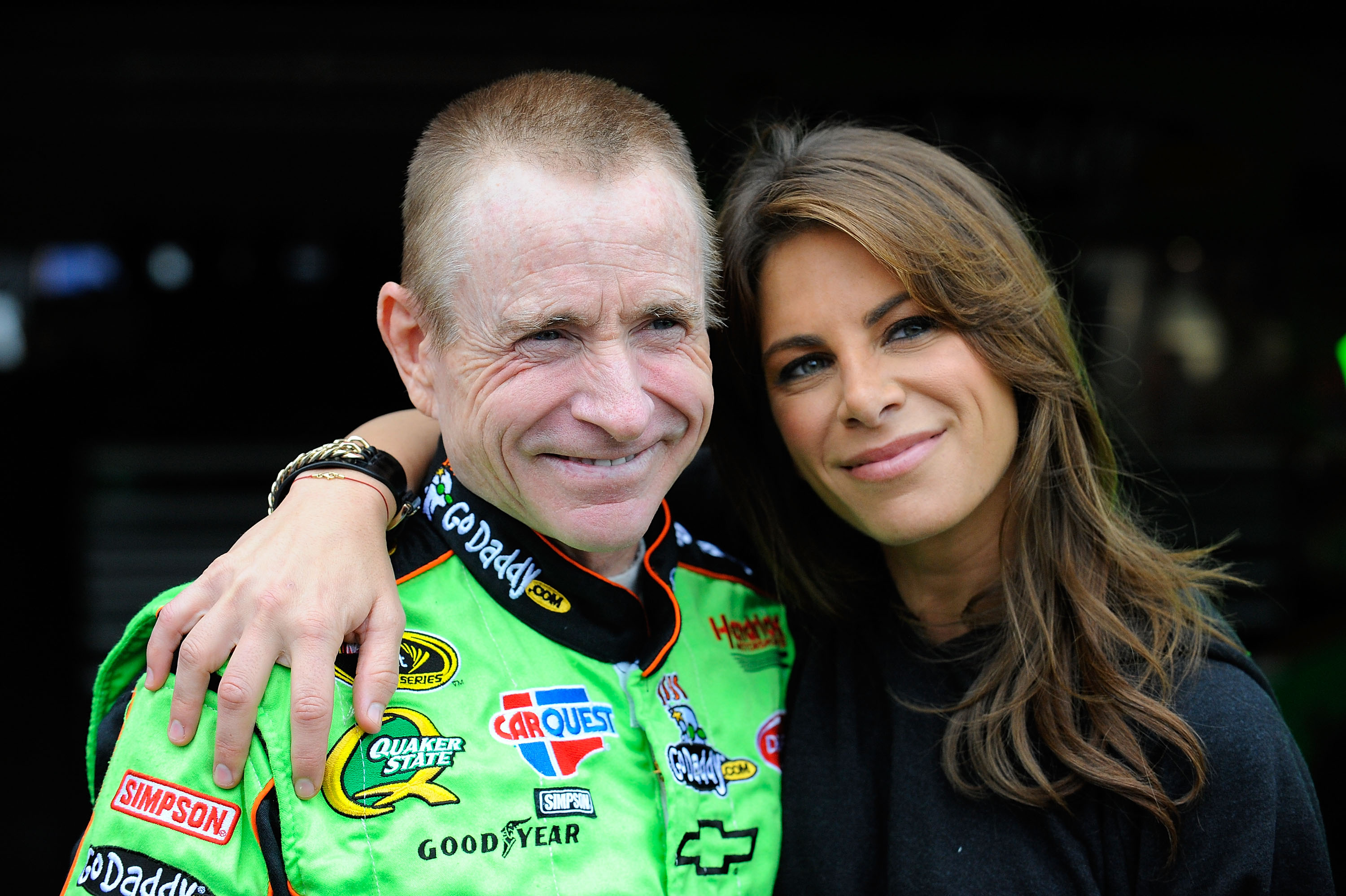 Mark got to meet fellow GoDaddy.com spokesperson Jillian Michaels at the race this weekend. I think the two would make a great pairing for an ad, Michaels as a famous TV physical trainer, Martin as a well-known fitness buff. It'd be better than simply putting together Martin and Joan Rivers simply because they're both old. 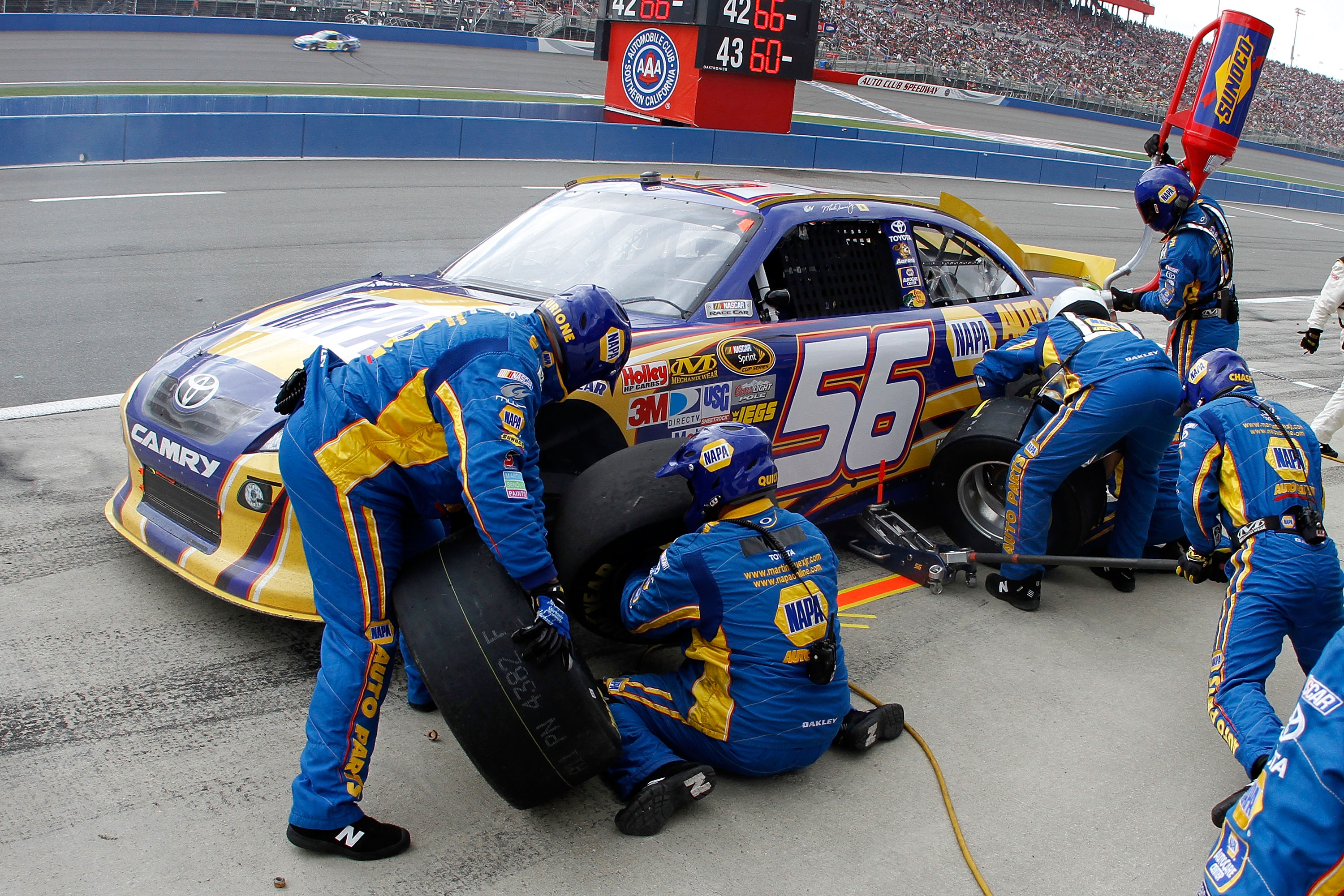 Fly the blimp? Too much hot air. Race announcer? Same thing there...oh, sorry. I have no idea where Truex finished on Sunday.

I decided that the more important thing to take from the race was that I've now seen this year's NAPA Know How commercial 100 times. You know, if he gained a position in the race results every time they showed that, he'd probably be outrunning Carl Edwards. 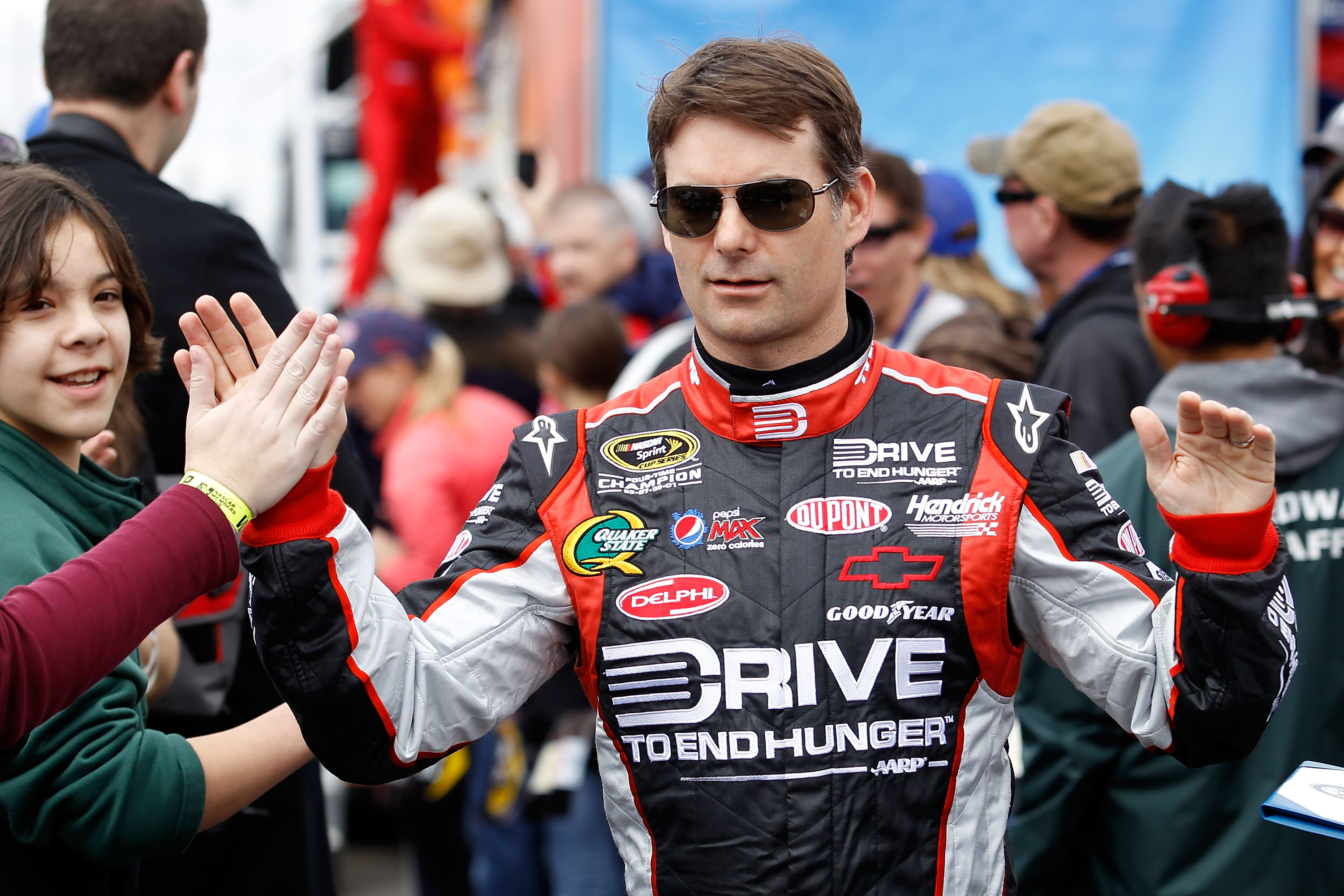 We found out this week that Ella Gordon, Jeff's young daughter, wants to be a race car driver. OK, we're at least 10-to-15 years too early to put any real thought into this, but how cool would that be? As for the current racing Gordon, he hasn't had a top 10 since winning at Phoenix. Hmmm. 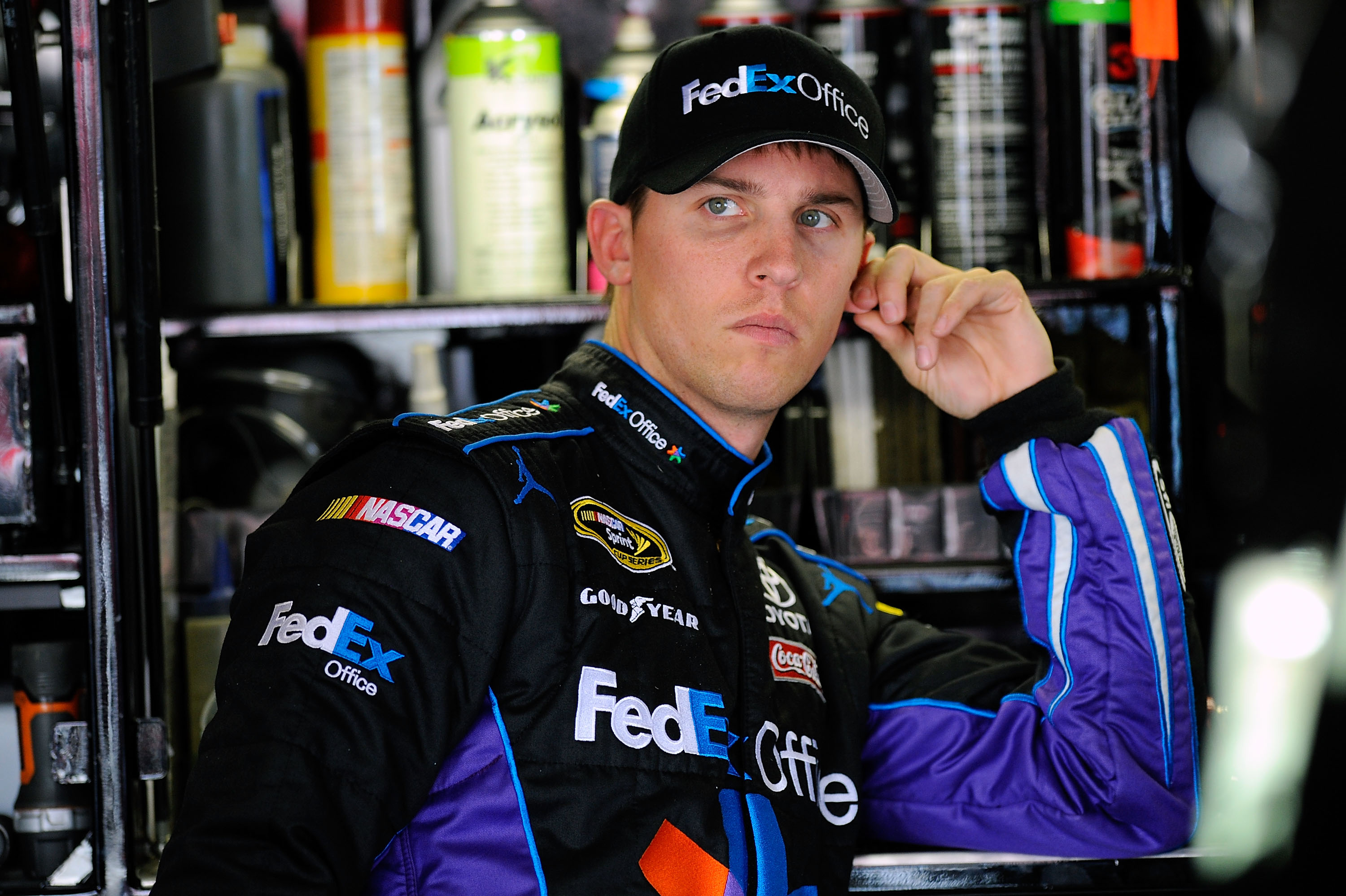 That Joe Gibbs Racing engine department has some serious work to do this season. Hamlin is not performing like he did for the majority of last season. You know the ability is there. It's just a matter of when everything comes together. 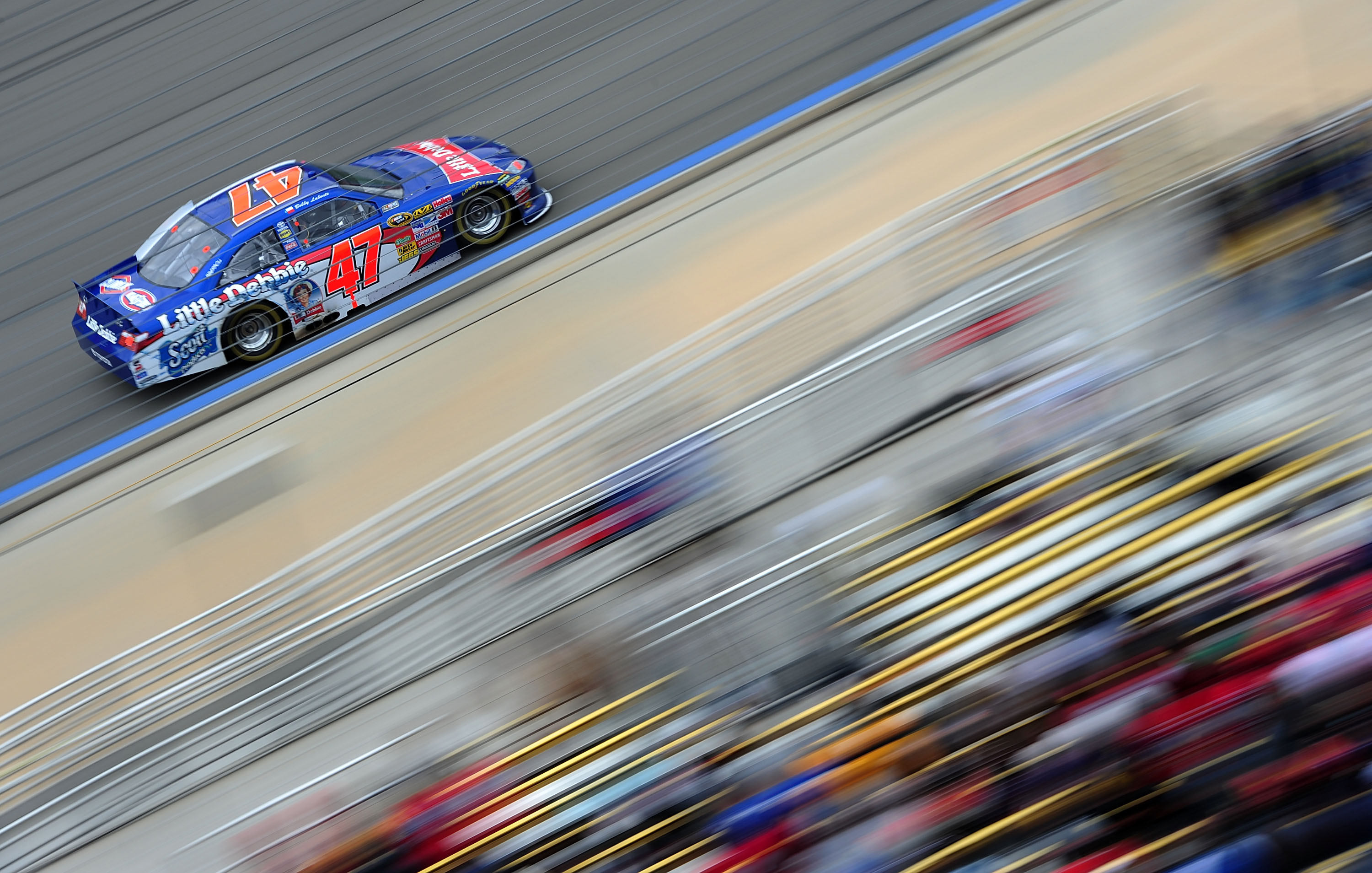 He may have crashed out on Sunday, but you have to admire what Labonte has done with JTG Daugherty Racing. Here's a former champion whose career has been somewhat left for dead and a team that lost its rising star in Marcos Ambrose.

Right now, Ambrose's move looks lateral, as the two are even in points, but for Labonte, it's been a huge step forward. 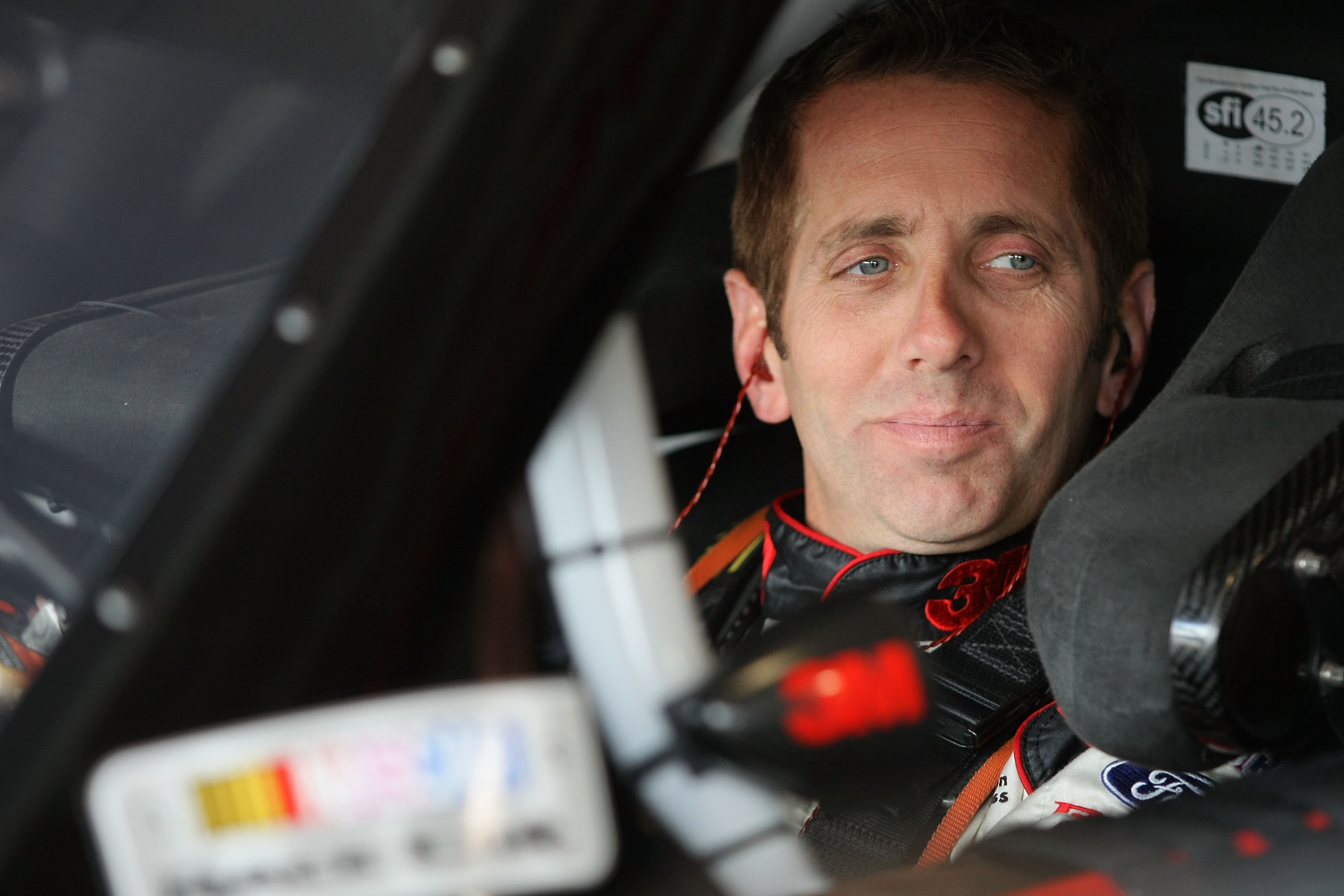 Biffle hasn't done much smiling this season. He had a rough start at Daytona and he spent time in the 30s in points. While the former Fontana winner didn't do much to assert himself with an 11th place run on Sunday, he did propel himself up the standings three positions to 20th. One good finish, plus a few bad ones for the right opponents, could have him in the top 15 next week. 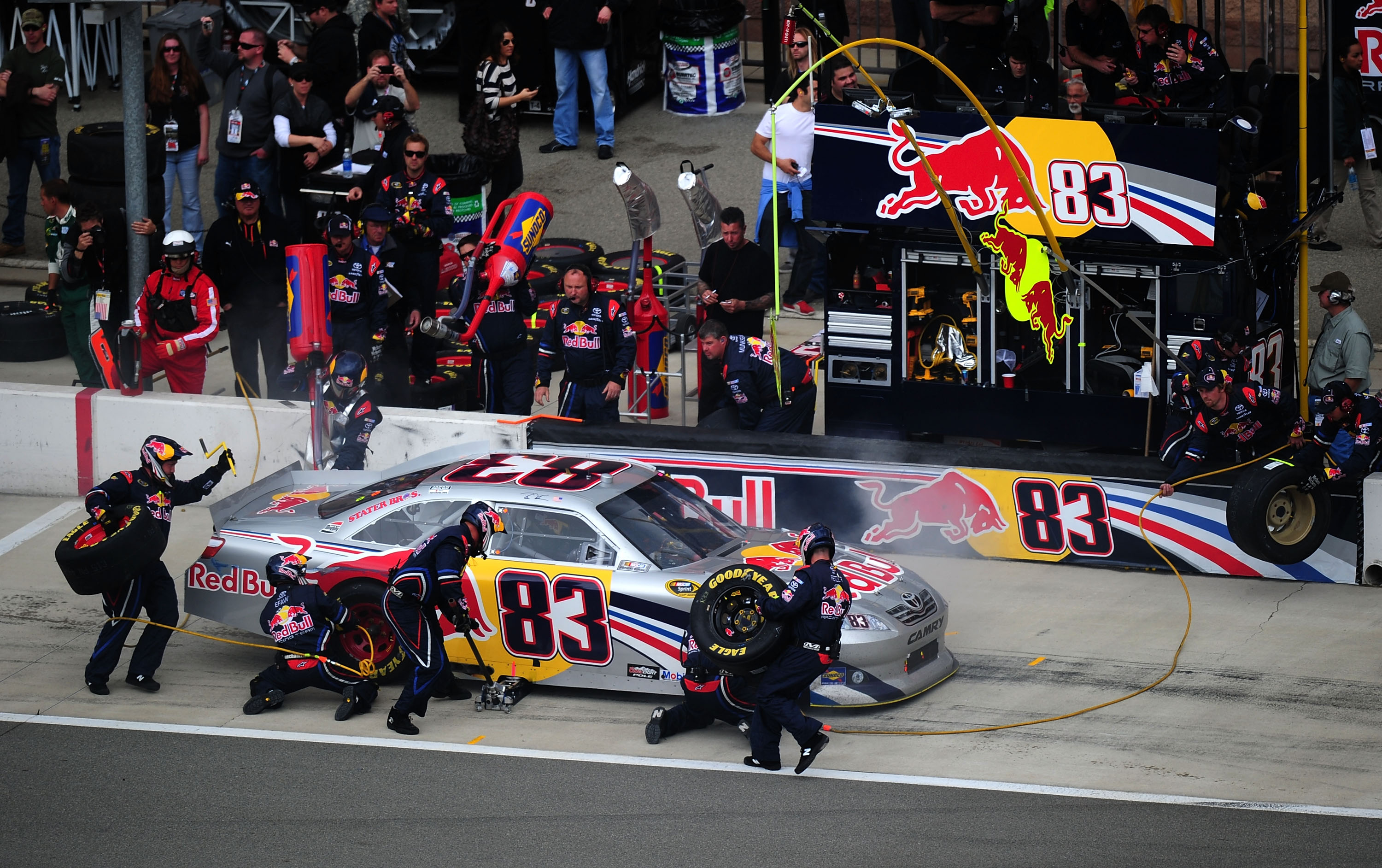 That eighth-place finish marked Vickers' second top 10 of the season, the most of any driver currently out of the Chase.

It also facilitated a seven-spot jump in the standings to 24th, the best jump of any full-time driver (tied with Clint Bowyer). Is he all the way back? Not yet. Is he getting there? No doubt.