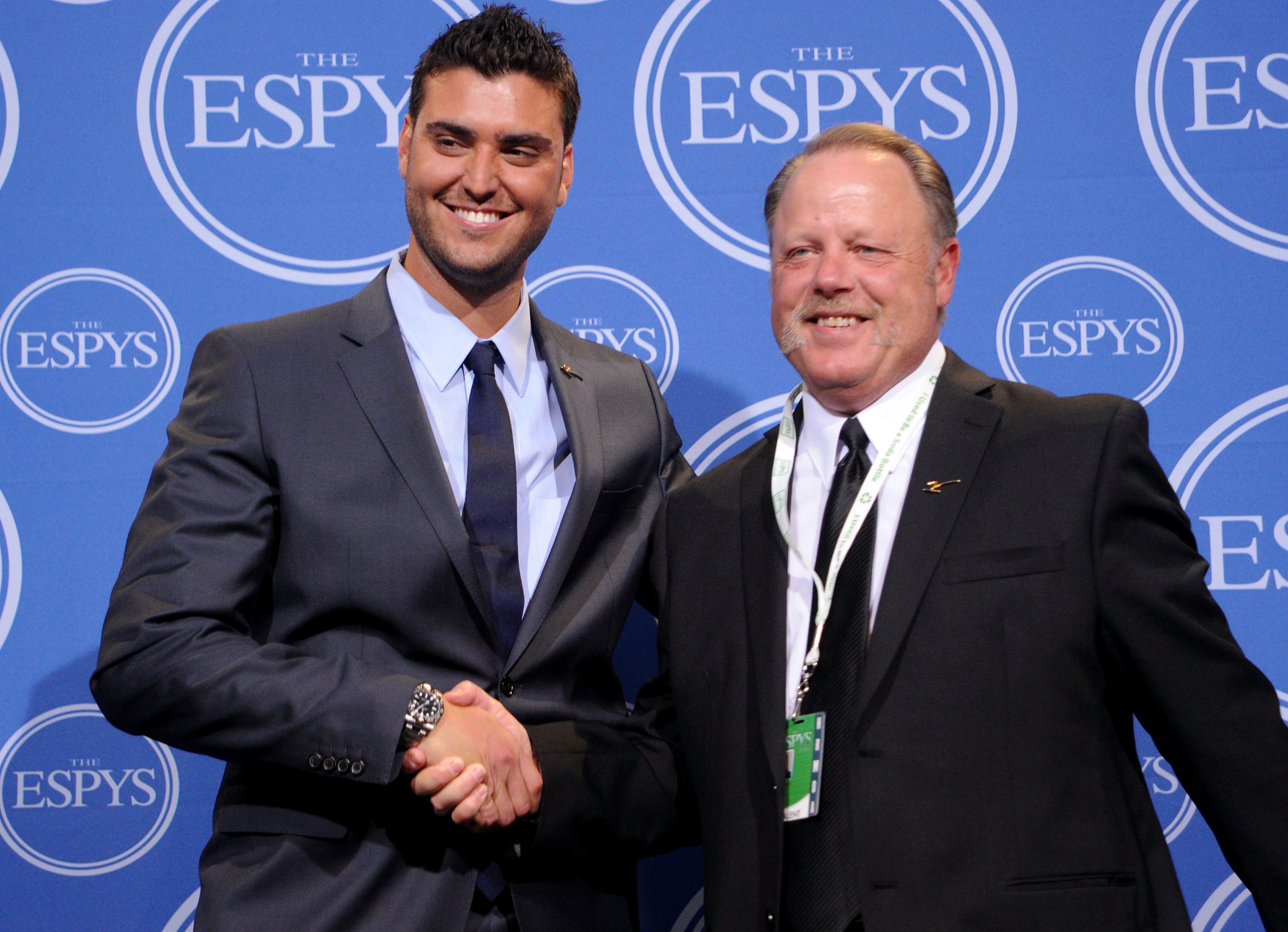 The Indians witnessed perhaps the best-pitched game of 2010, when Armando Galarraga dispatched the Tribe with great haste.  Had Jim Joyce gotten the call right, Galarraga would have completed a perfect game in just 83 pitches. Even if every Indians hitter had looked at three straight strikes, they would have spared Galarraga only two pitches of effort.

Tribe hurlers were rarely so commanding or efficient last season, but they had their moments.  Here are the top nine pitching performances by Indians of 2010. 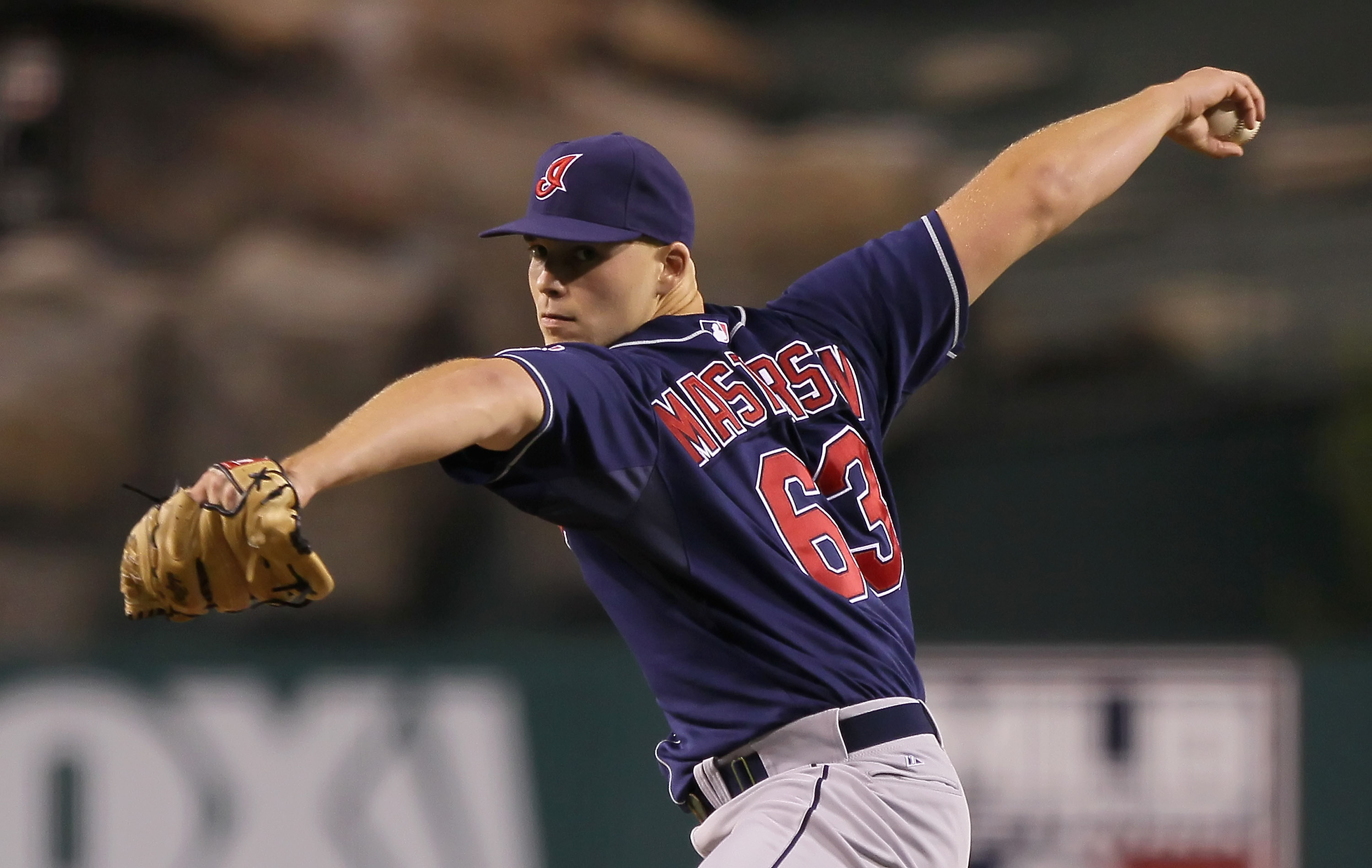 Facing eventual Cy Young Award winner Felix Hernandez, Masterson was effectively wild.  In six wobbly innings of work, Masterson allowed the leadoff hitter to reach four times and twice allowed a second hitter to reach base before recording an out.  But Masterson battled to escape each jam without surrendering a run, a task made easier by a historically punchless Mariners offense.

In the first inning, with Ichiro Suzuki and Chone Figgins on base, Masterson struck out Russell Branyan, retired Jose Lopez on a fly to short center field, then coaxed a grounder from Franklin Gutierrez to end the inning.

Easy as 1-2-3, Masterson shut down the M's in the second and third innings. Then, in the fourth, Shin-Soo Choo doubled Branyan off first on Lopez's fly out to right and Gutierrez struck out.

Masterson saved his best work for the fifth inning.  A double by Casey Kotchman began the inning, followed by a walk to Adam Moore.  With the game still scoreless, Michael Saunders attempted to bunt the runners to second and third, but Masterson wheeled and threw to third to force Kotchman.  Chris Woodward walked to load the bases, bringing up Ichiro, who lined out to Matt LaPorta at first.  Figgins improbably tried to bunt for a hit with two out, but LaPorta made the play unassisted and Masterson escaped unscathed.

For the game, Masterson pitched six scoreless innings, allowed just one hit and walked six while throwing just 49 of 100 pitches for strikes.  If not for his poise with runners on base, his fielding,  and his ability to induce ground balls, Masterson would surely have given up one or more runs.  Ironically, these traits are often cited as evidence that his true calling lies in relief.

Hernandez, for his part, showed a rare lack of poise, melting down in the seventh inning of a still scoreless game after Luis Valbuena reached on a two-out error by Figgins.  Seemingly shaken, Hernandez surrendered consecutive singles to Lou Marson and Michael Brantley to plate Valbuena.  Asdrubal Cabrera followed with a double, scoring Marson, and Hernandez walked Choo intentionally, then served up a grand slam to Travis Hafner.

Daren Brown, the M's interim manager, mercifully pulled King Felix after this barrage.  But because of the error, Hernandez didn't "earn" any of the six runs that scored, and his case for the Cy Young looked a little bit stronger. 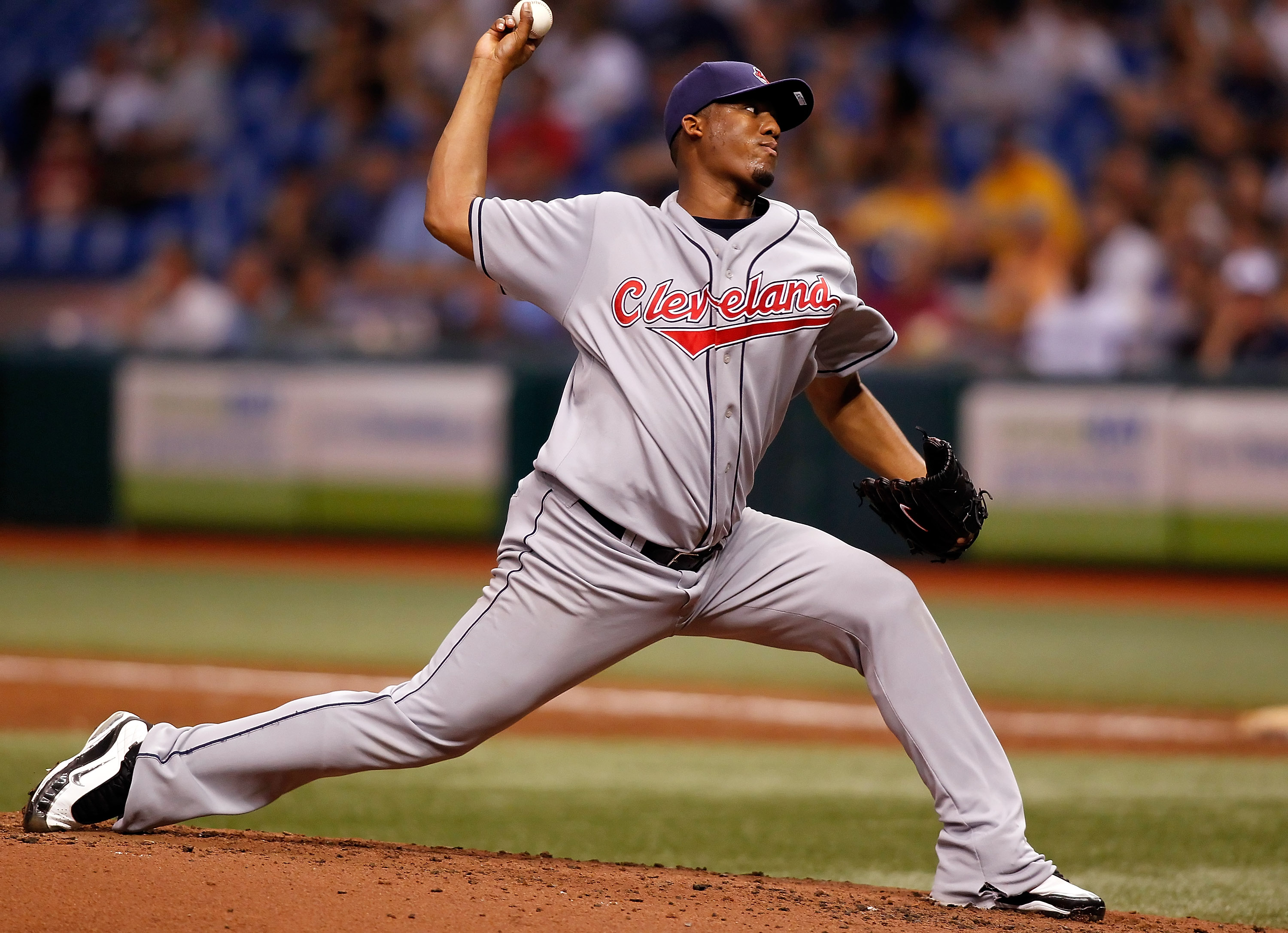 The Mariners no doubt made many teams' pitching highlight reels in 2010, but in this game at least, they had the last laugh.  A single, a walk and another single, and the Mariners had the only run they would need—or score—against Carmona, who limited Seattle to four singles and five walks in eight innings.

Nothing about this start was especially remarkable for Carmona. He pitched efficiently, throwing only 103 pitches; his sinker tempted the Mariners to hit 13 ground balls, resulting in two inning-ending double plays; and he allowed one baserunner or fewer in every inning but the first.

On this day, however, journeyman lefty Luke French was simply better.  The Tribe mustered just one hit and three walks off French before he gave way to the bullpen in the eighth, and a desperate ninth-inning rally off David Aardsma was defused by Trevor Crowe's caught stealing, Choo's foul fly to left and a Shelley Duncan strikeout. 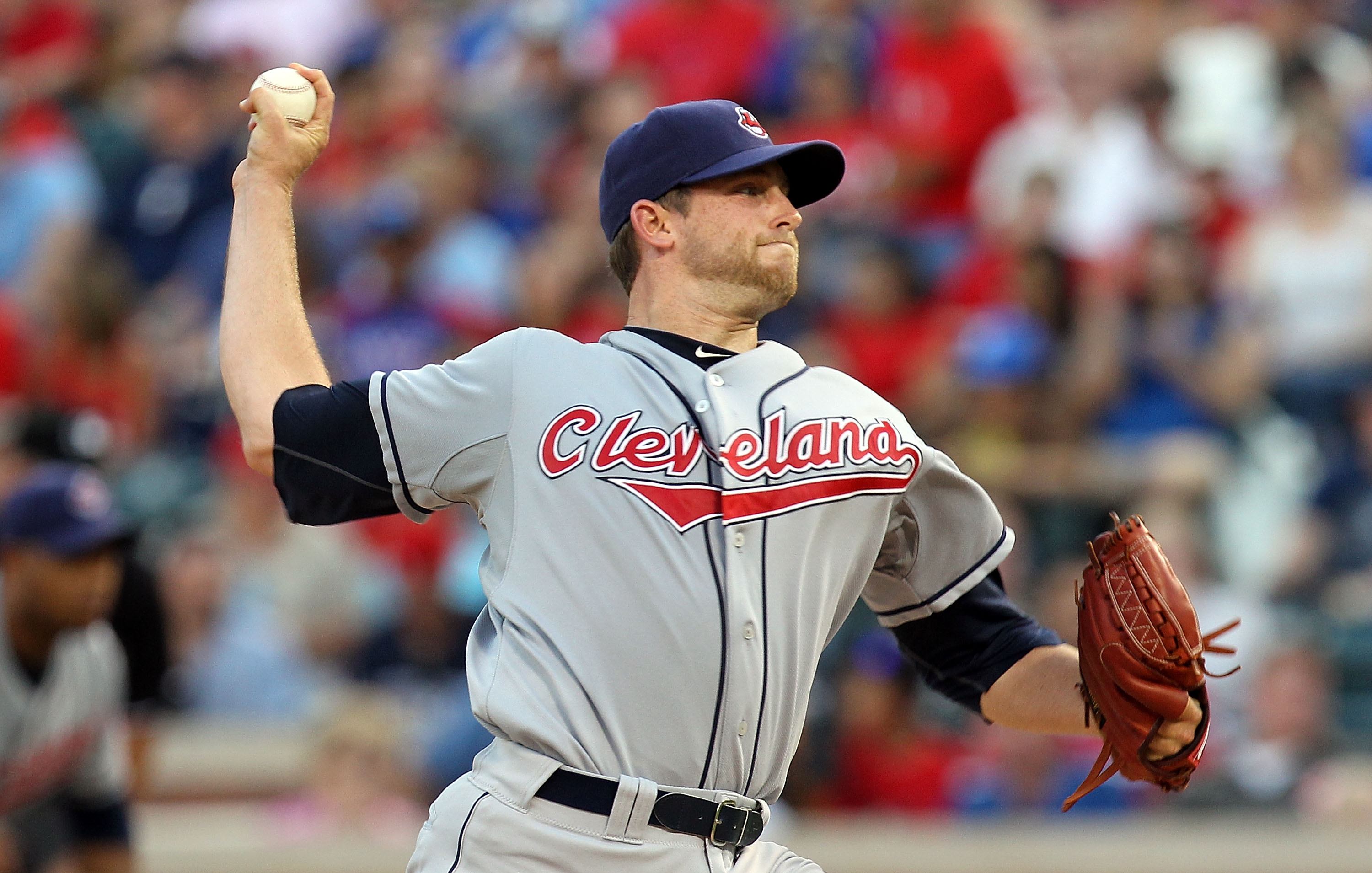 Just one day later, Mitch Talbot shut down the M's on five hits and one walk in six and two-thirds innings.  Cabrera's throwing error in the seventh led to an unearned run, the only blemish on Talbot's record.

Talbot, acquired from Tampa Bay for Kelly Shoppach in December 2009, seized the role of fifth starter in the spring and never really let go.  He made 28 starts, threw 159 innings and provided league average performance for the minimum salary.

Shoppach, who was at one time considered the heir apparent to Victor Martinez, signed a two-year deal with the Rays that will pay him $5.55 million, then proceeded to lose the starting catcher job to unheralded rookie John Jaso.

I'd have to call that a win for the home team. 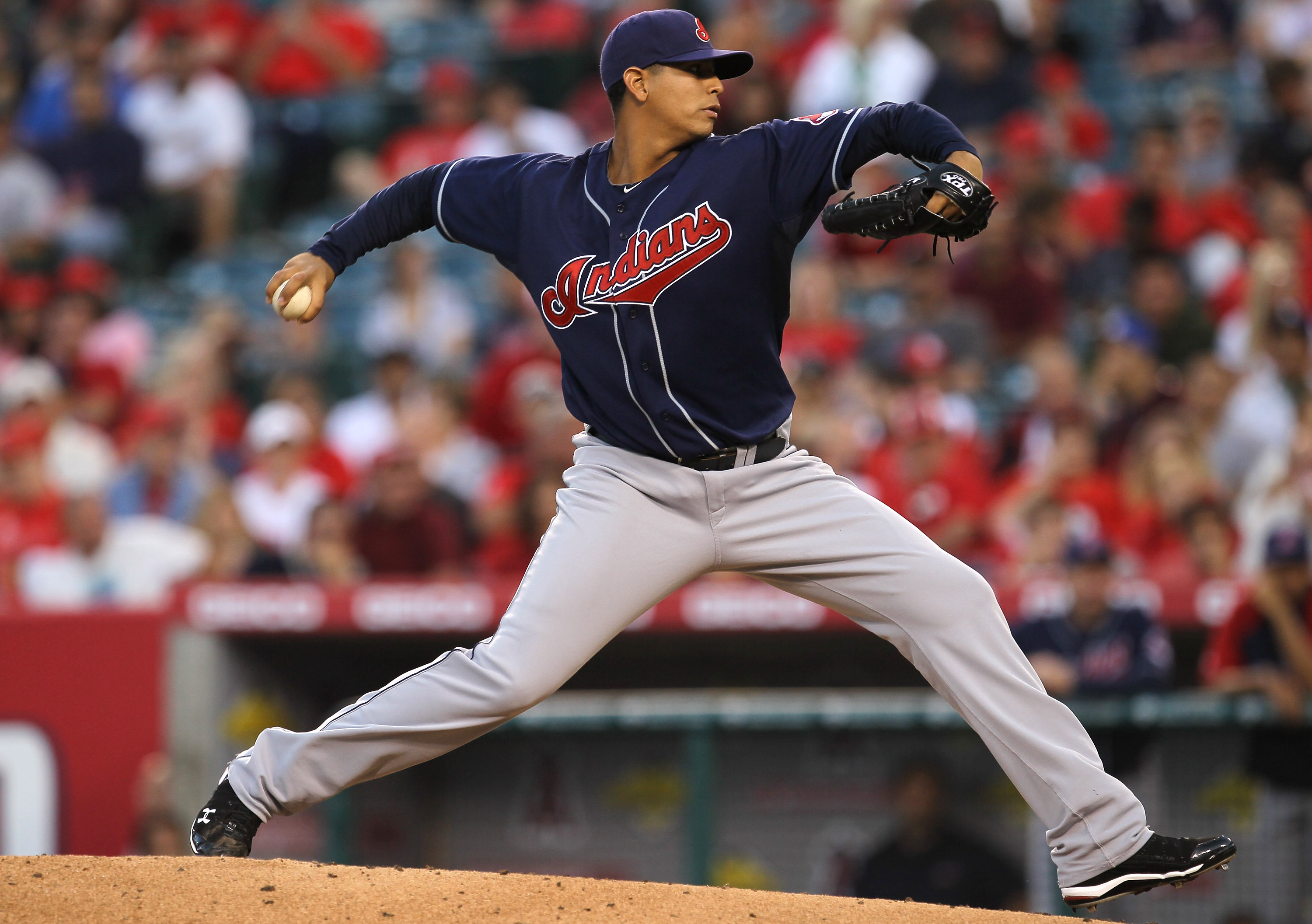 Carrasco earned a reputation for giving up the untimely hit, often a home run, in his five 2009 starts, all of which ended with an Indians loss.  But no Indians pitcher made greater strides in 2010: Carrasco recorded quality starts in six of seven outings, and his ERA fell from 8.87 to 3.83.

This start against the playoff-bound Twins was his strongest. Carrasco scattered five hits and three walks, twice inducing double play grounders to get out of a jam.  He left a scoreless game with one out in the eighth, but Jim Thome homered off Justin Germano in the 12th to win it for the Twins.

Nick Blackburn, Minnesota's starter, continued his mastery of the Tribe with eight shutout innings. Blackburn has six wins and three losses with a 2.51 ERA and a 1.102 WHIP in 75.1 career innings versus Cleveland.  In 496 innings against the rest of baseball, his numbers are 26-33, 4.81 and 1.443.

He also throws the most hittable stuff in the majors : Hitters made contact with 91.0 percent of Blackburn's pitches last season, worst among regular starters.  And yet, he owns the Indians.

Can someone please explain this to me? 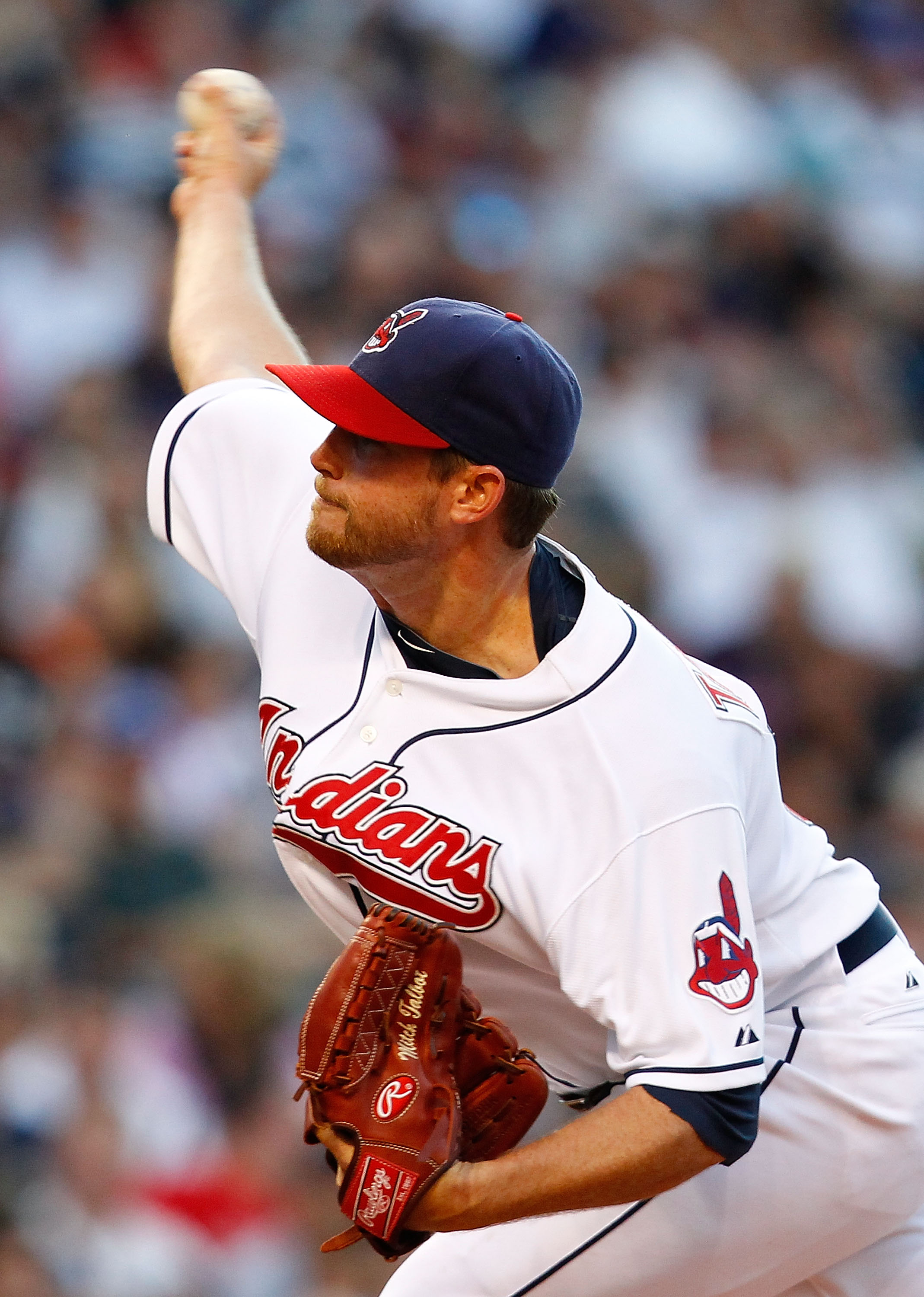 Talbot saved his best start of 2010 for his last, holding a Tigers lineup without Miguel Cabrera or Magglio Ordonez to just five singles in seven innings.  Neither team had much to play for, and the Tigers' 3-4-5  of Johnny Damon, Ryan Raburn and Don Kelly scared no one that day.

Nevertheless, Talbot breezed through seven innings in just 93 pitches.  Indians starters were bolstered in September by a bullpen that combined for a 2.11 ERA, 89 Ks and just 28 BB in 98 innings.  Jensen Lewis and Vinnie Pestano closed this one out to preserve Talbot's tenth victory. 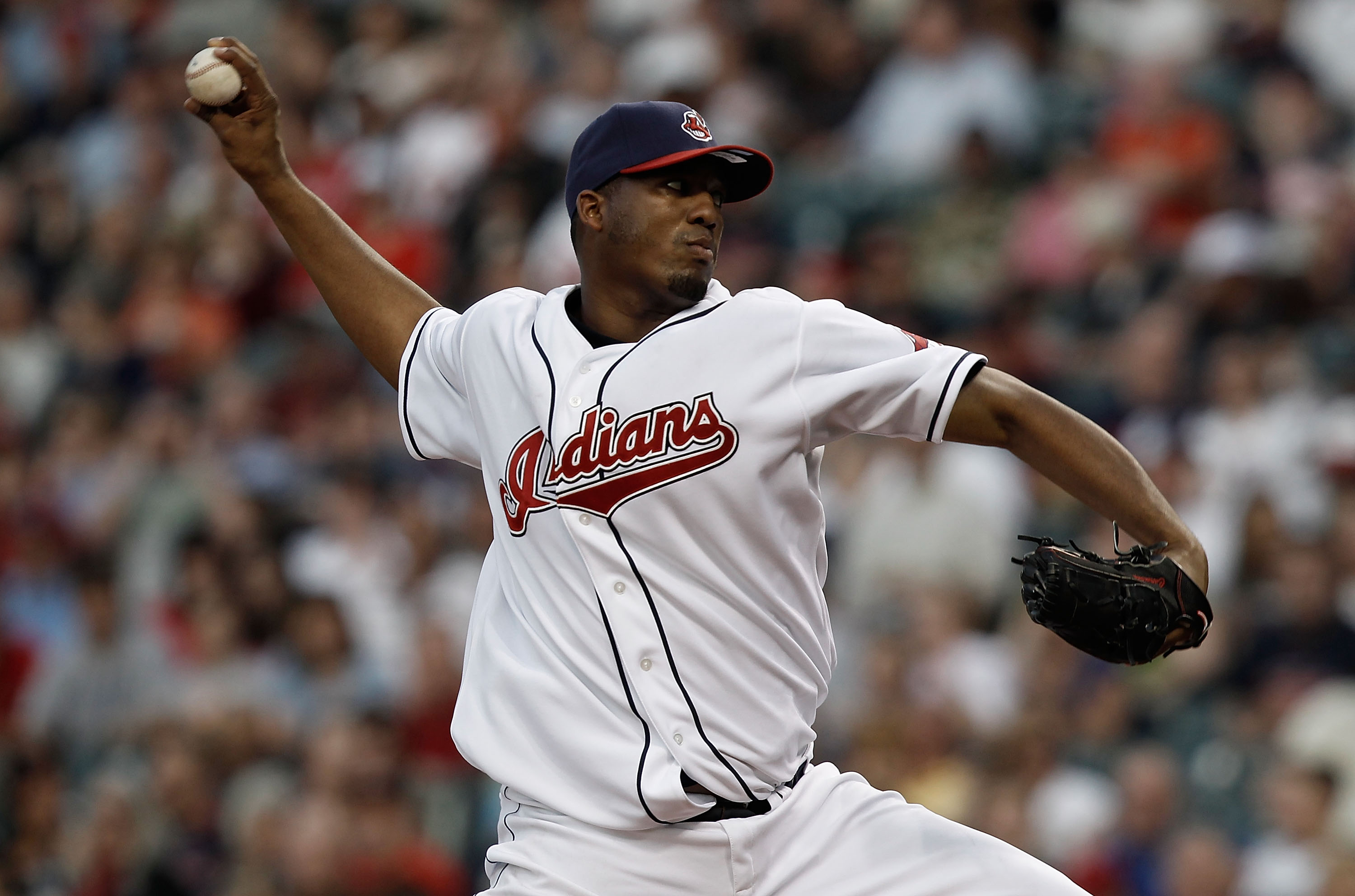 One day before Stephen Strasburg made his much-anticipated AL debut, Carmona reminded fans that he was pretty good too.  Through seven innings he was nearly perfect, allowing only singles to Adam Kennedy and Roger Bernadina before erasing both with double play ground balls.  Ryan Zimmerman's eighth-inning leadoff home run prevented the shutout, but didn't deter Carmona from closing out the Indians' fourth consecutive win.

Strasburg's win the next day sent the Indians into a tailspin of 11 losses in 12 games, but for one night, Tribe fans could revel in Carmona's ace performance.

3. Jake Westbrook, May 16 at Baltimore 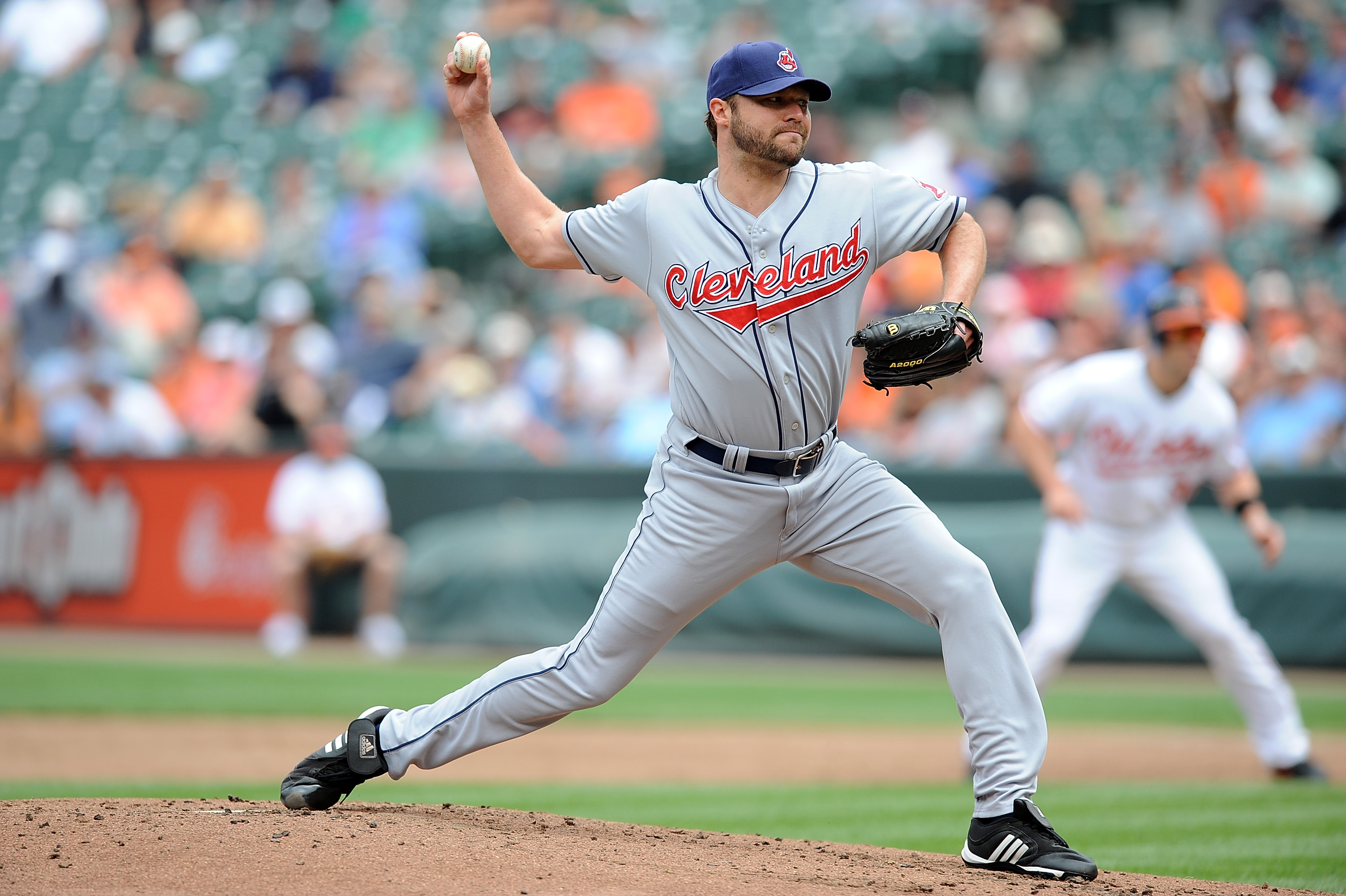 Rewriting the old proverbs, the right-handed Westbrook craftily maneuvered through nine innings against the Orioles, scattering eight singles and just missing a shutout when Luke Scott homered with two out in the ninth.  The win was just Westbrook's second—and his first complete game—since undergoing elbow surgery in June of 2008.

The three-year, $31 million extension offered to Westbrook in April 2007 ranks among the worst decisions of Mark Shapiro's time as GM, primarily due to Westbrook's injury. But from 2004 to 2006, Westbrook won 44 games and pitched nearly 640 innings with an ERA+ of 108.  Fangraphs values his contributions for those three years at $41.8 million, yet Westbrook made only $8.1 million, exactly the kind of return that small market teams depend on to contend.

Westbrook, with his low strikeout rate, was always a bad bet to continue performing at the level.  But he had beaten the odds and pitched reliably for three seasons, and the contract extension Westbrook received was considered market value at the time (see Gil Meche).

You can argue that the Indians should not have paid the going rate for league average performance, or that the money invested in Westbrook could have been used better—say, to extend C.C. Sabathia's contract.

But I don't think that you can argue—given the deals offered to Westbrook, Hafner, Sizemore, Martinez and Lee—that the Dolans were unwilling to spend money to retain the team's stars. 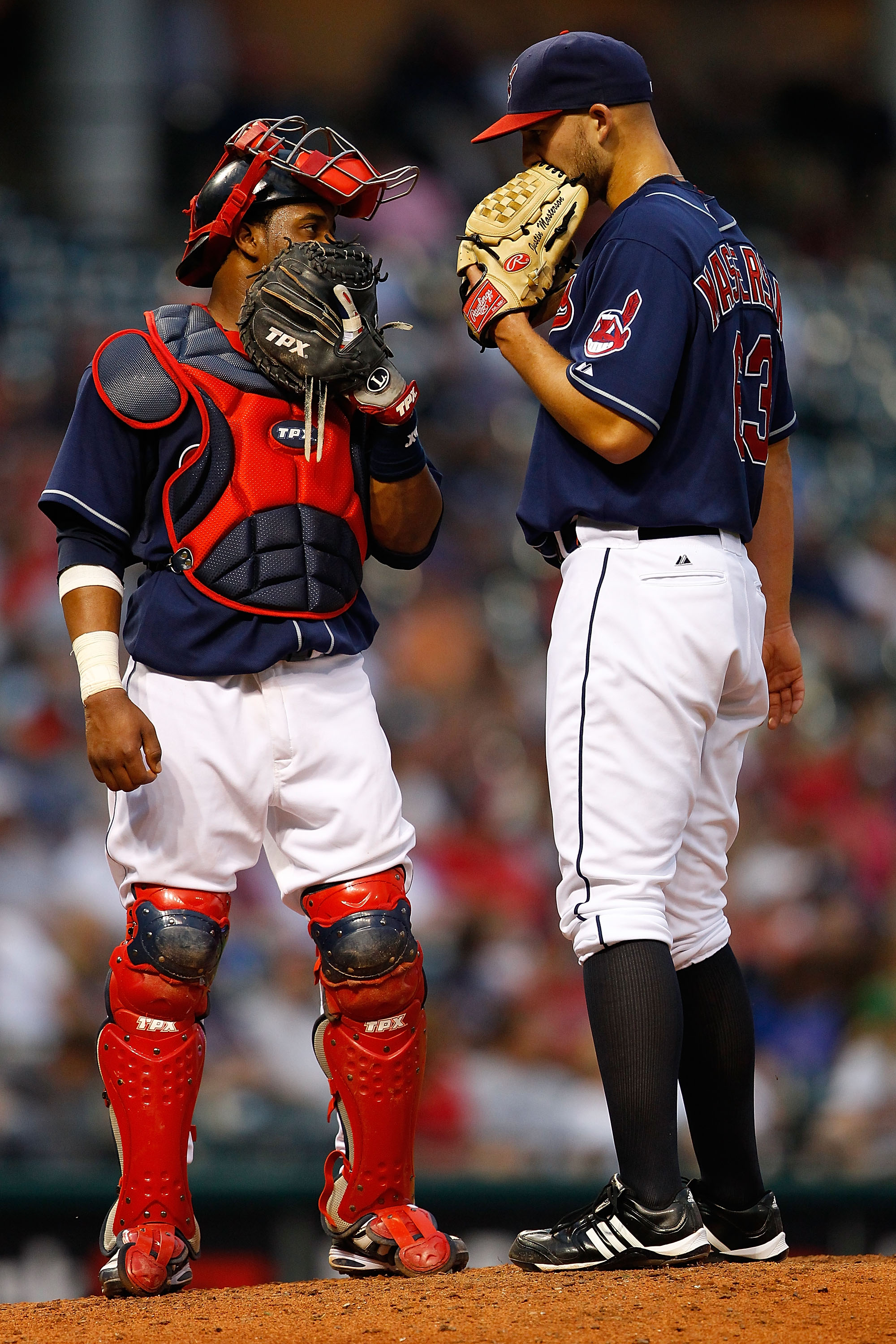 Masterson, who is improbably the greatest Jamaican pitcher ever, showed his potential as a starter in this game against his former teammates. Two singles and two walks were all the Red Sox could muster in support of their eventual Cy candidate Clay Buchholz.

If you feel yourself succumbing to the calls to move Masterson to the bullpen, remember this game.  Because, despite his maddening inconsistency—in his next start, he gave up 10 hits and seven runs to the Mets—Masterson has more value to the Indians in the rotation.

And when he starts pitching like this on a regular basis, you'll thank me. 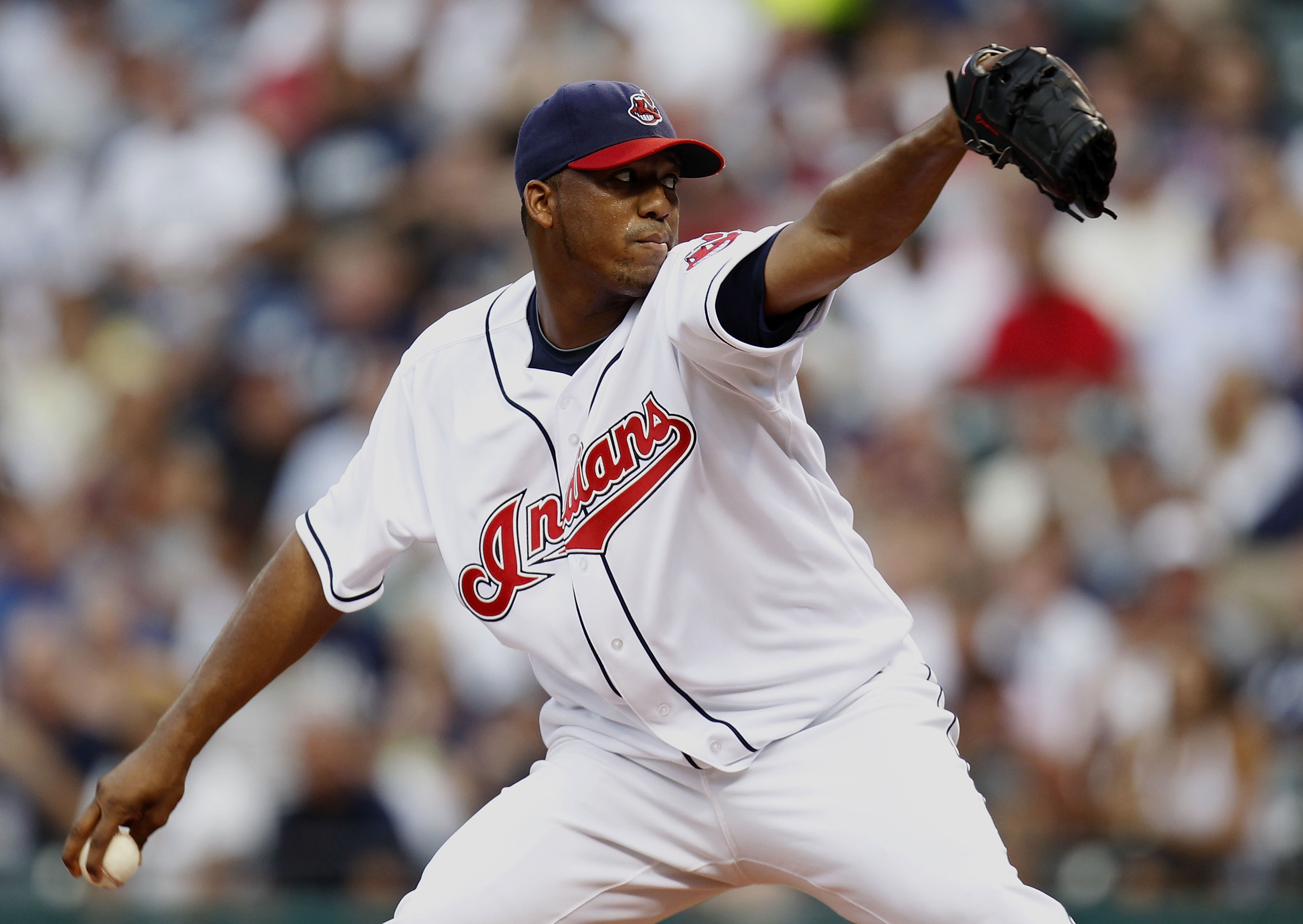 Fully six of the starts on this list happened in August or September, which would be an incredibly good omen for 2011 if only, like this one, they had all occurred against teams like the playoff-bound Twins.

Carmona's start on September 10, a three-hit shutout of Minnesota, provided the best evidence that he can return to his 19-win form of 2007.  He struck out seven batters, including four of his last six, and retired the last 16 men he faced.  Denard Span laced a two-out triple in the third for the only extra-base hit off Carmona.

The Indians control Carmona through 2014 if they choose to exercise club options worth a total of $28 million.  Should he improve again in 2011, Carmona will be well worth his $7 million club option for 2012.

Read more about the Cleveland Indians at tribescribe.wordpress.com and on Twitter @tribescribe.