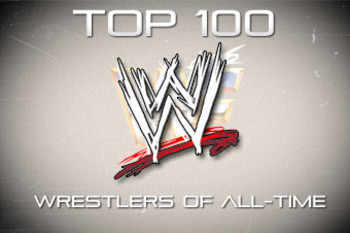 Time spent with other organizations, even if they were an affiliate of the WWE, is not being considered on my list. 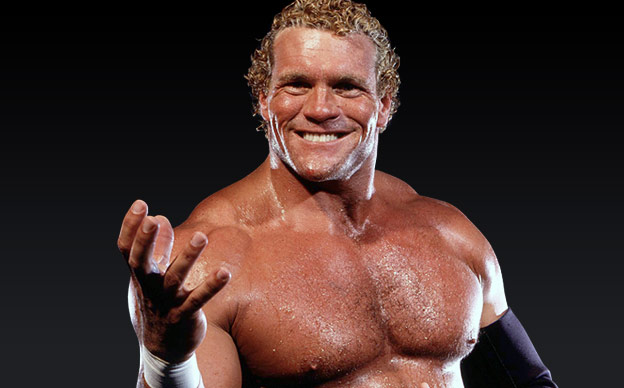 Coming in at number 50 on my list is the self-proclaimed "Master and Ruler Of The World", Sycho Sid.

In the early 90's, Sid spent a few years in the WWE, but didn't have much success.  He left for a few years to go to WCW and another independent circuit known as USWA.

His return to the WWE in 1995 is where the success came.

Sid came back to the WWE when Shawn Michaels was red-hot.  However, Sid was Shawn's kryptonite, as he defeated Michaels at Survivor Series 96' for his first-ever WWE Championship.

Sid was originally brought back to the WWE as Michaels bodyguard, but ended up taking the championship from him.

Sid would drop the title back to Shawn Michaels at the 1997 Royal Rumble, but would win it once more on an episode of Raw in February, defeating Bret Hart.

At WrestleMania 13, Sid would become one of Undertaker's streak victims, losing the title to him in a No DQ match. 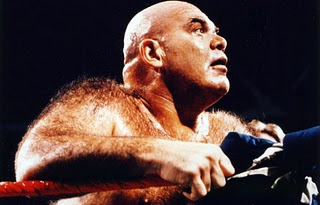 No turnbuckle was safe for the next wrestler on my Top 100, George "The Animal" Steele.

Steele never won any titles inside of the WWE, but was still inducted into the Hall Of Fame in 1995.

Steele was actually brought to the WWE by Bruno Sammartino.  Steele would eat "Green Clorets" breath mints to give his tongue the green effect.  He would eat up turnbuckles and use the stuffing as a weapon against his opponents.

Steele didn't accomplish much on paper during his wrestling career, but his promos were some of the best and he was a fan favorite, and deserves to be on this list. 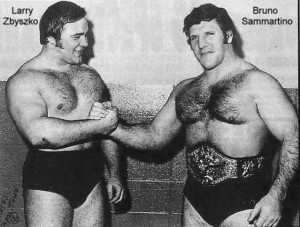 Larry Zbyszko wasn't just an announcer for WCW, he is a "Living Legend" and has done a lot of wrestling in his past to prove it.

Zbyszko actually started out in the WWE, wrestling with Tony Garea, they would win the Tag Team Championships in 1978.

In his eight years inside the WWE, Zbyszko would step out of champion Bruno Sammartino's shadow by challenging him to an exhibition match, which would leave Sammartino in a pool of blood.

Sammartino was often addressed as "The Living Legend", which Zbyszko still uses today.

Their feud would eventually come to an end at Shea Stadium in 1980, where Sammartino defeated Zbyszko in a steel cage match.  Shortly thereafter, Zbyszko would leave the WWE for good. 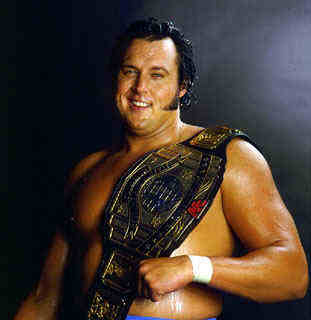 The Honky Tonk Man is one of, if not, the greatest WWE Intercontinental Champion of all-time.

You could also consider him one of the best mid-carders of all time, because he never got the chance to stand under the big spotlight.

The Honky Tonk Man, also known as Wayne Farris in the real-world, would only win the Intercontinental Championship once.

However, his run as Intercontinental Champion, is still the longest ever, spanning over a year, 454 days to be exact.

Farris won the belt from Ricky Steamboat, and didn't lose it until he faced The Ultimate Warrior at Summerslam 1988, who came out as a mystery opponent, and beat Farris in under a minute.

While this was the only championship success Farris had in the WWE, his work as a heel that no one could stand helps his cause on this Top 100 count down. 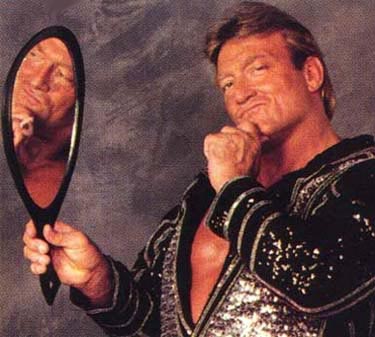 "Mr. Wonderful" Paul Orndorff, was inducted into the WWE Hall Of Fame in 2005.

Orndorff would take part in the famous match at the first WrestleMania against Hulk Hogan and Mr. T, with Roddy Piper as his partner.

"Cowboy" Bob Orton would interfere in the match, but would accidently hit Orndorff with his cast arm, allowing Hogan to grab the pinfall on Orndorff for the victory.

Orndorff would turn face shortly afterwards, and start teaming with Hogan, which would lead to a feud with Adrian Adonis, calling Orndorff "Hulk Jr" and going soft for turning face and teaming with him.

Orndorff would turn heel again, turning on Hulk Hogan after a match.

A weight lifting injury would shorten the career of Orndorff, not giving him much of a chance to succeed. 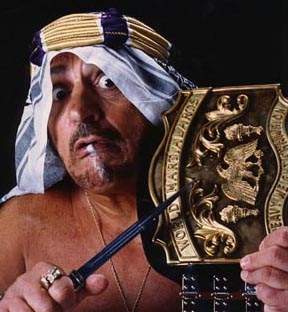 Not to be confused with The Iron Sheik, Ed Farhat, is known to most as "The Real Sheik".

Farhat's character was based off of a rich man, from Syria.  He actually used hidden pencils to cut opponents faces, as well as an illegal fireball he would throw at his opponents.  Sounds crazy, but it really happened.

Farhat would never speak on camera during his wrestling career, instead, using his managers to cut his promos.

Farhat feuded with, and defeated the likes of, Bobo Brazil, Bruno Sammartino, and even Andre The Giant, but would never win any major championships with the company.

His only gold, was the WWWF United States Championship.

His nephew, Sabu, would learn a lot from Farhat, and would base his hardcore character, closely resembling the same person.  Sabu would accept Farhat's Hall Of Fame induction on his behalf in 2007, due to Farhat's death in 2003 due to heart failure. 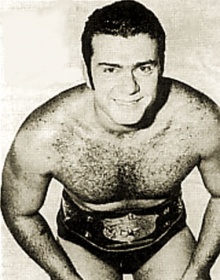 Spiros Arion entered the WWE in 1966, and was an instant star.

Arion would team up with Sammartino, and defeat several opponents, including the team of Gorilla Monsoon and Toru Tunaka.

It is really odd that Arion didn't win any singles gold.  His popularity reached the same heights some believe, as to that of Bruno Sammartino during his title runs.

Much of Arion's success came overseas, but it is unclear why Arion wasn't more successful in the US with the WWE.

Arion has also, yet to be inducted in the WWE Hall Of Fame, expected to be around 71 years of age, Arion is still living today and should be considered for the Hall of Fame. 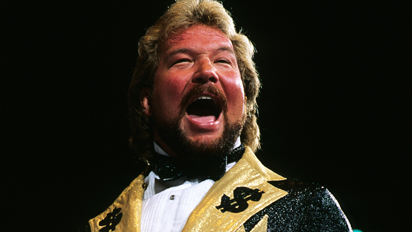 "Everybody's got a price, for the Million Dollar Man!"

The Million Dollar Man Ted DiBiase was the man you loved to hate, but wanted to be walking in his shoes.

With the way some fans cheer heels more often today, this character would be loved and would be hard to keep heel.  Who doesn't want to be rich and make fun of other people?

DiBiase would also be the second-ever King Of The Ring in 1988, defeated Macho Man Randy Savage in the finals.

He headlined the WWE Hall Of Fame inductions in 2010, and had money reign down on fans as he was inducted. 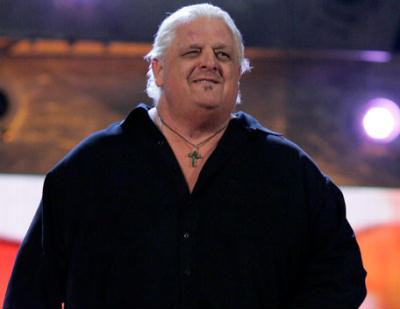 In 1989, Rhodes would wrestle in the WWE as the "Common Man" Dusty Rhodes, wearing a black and yellow polka dotted outfit to the ring.

Rhodes would be managed by "Sweet Saphire" and they would win the first ever mixed-tag team match against Randy Savage and Sensational Sherri at WrestleMania VI.

His son, Dustin Rhodes, would debut at the 1991 Royal Rumble, around the same time his father, Dusty, called it quits on the main stage.

Rhodes and his innovative Bionic Elbow would be inducted into the WWE Hall Of Fame in 2007. 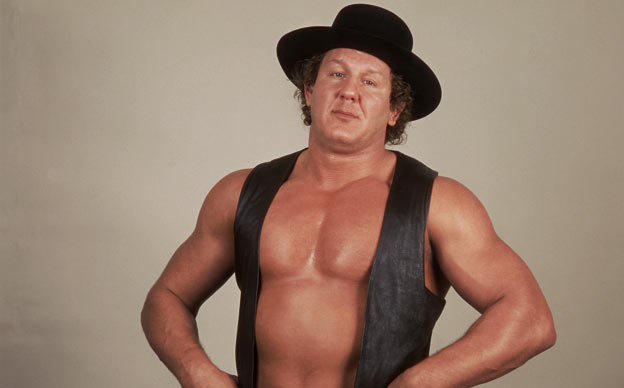 In case you couldn't tell by the last name, or the strikingly same looks, "Cowboy" Bob Orton is the father, of current WWE Superstar, Randy Orton.

Bob Orton, is actually the son of Bob Orton Sr., making Randy a third-generation star, like The Rock.

Unilke his son Randy, "Cowboy" wouldn't have quite the success in the WWE, but was still a hated heel.  He would act as Roddy Piper's bodyguard and would be referred to as "Ace" Orton by Piper.

Orton's broken arm at War To Settle The Score in 1985, led to him using his cast as a weapon in the coming months, which also came into play at the first WrestleMania.  Orton hit Paul Orndorff by mistake, causing Hulk Hogan to score a pinfall and win.

On an episode of Piper's Pit, where Adonis had Orton where a pink cowboy hat on his competing show, The Flower Shop, Orton would help Adnois attack Piper, and tear down his set.

Orton was inducted into the WWE Hall Of Fame in 2005.