Jarome Iginla Trade Rumors: 5 Things He Would Bring to the Philadelphia Flyers 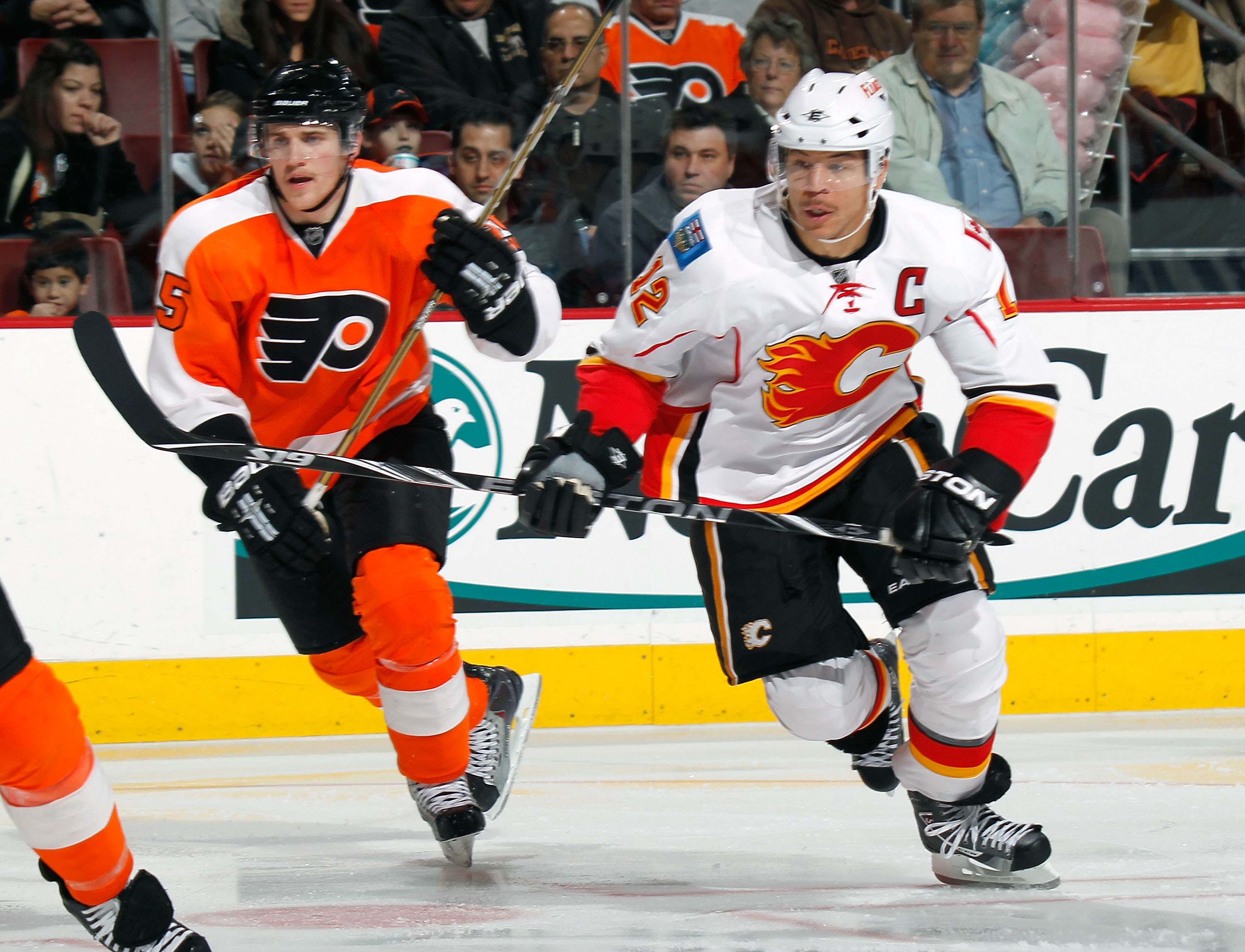 One of the many rumors that have been circulating now that Darryl Sutter has resigned as GM of the Calgary Flames is that Jarome Iginla might be sent to Philadelphia.

Assuming that new Calgary GM Jay Feaster and Flyers GM Paul Holmgren can hammer this deal out, and that’s a HUGE if, it would be a great move for both teams.

The Flyers would have to give up players like Scott Hartnell and Matt Walker to alleviate cap room and they would most likely have to add some prospects and picks.  Rumors have swirled about Andreas Nodl and Eric Wellwood, but nothing is confirmed.

Philadelphia would also have to cut ties with one of their goalies.  Depending on how they handle this situation, the Flyers may choose to send Bobrovsky down to the Adirondack Phantoms for more experience and to help with cap space.

Iginla would bring a lot to the Flyers and his addition could be the last piece in Stanley Cup puzzle.

Jarome Iginla brings the offense—and then some.

Iginla has scored 50-or-more goals two times in his career, and both times he was the league’s leading scorer (in 2004, he tied Rick Nash and Ilya Kovalchuk for the league lead).

If Calgary does move him, they would be sending Philadelphia a player that averages almost 35 goals a season, as well as almost 40 assists and over 70 points per season.

The addition of Iginla to the powerplay would also help fix the situation of not being able to take advantage of the man advantage.

In losing Scott Hartnell, the Flyers' “Power Forward," they would be getting back one of the greatest power forwards to ever play in the NHL.

Jarome Iginla is one of the best two-way forwards in the game, and he doesn’t mind getting his hands dirty at either end of the ice.

Iginla’s style of play would fit in perfect on a hardnosed Flyers team, and he would be a welcomed addition to a penalty kill unit that thrives on opportunities.

Along with his defensive abilities, Iginla would join Richards as one of the best tandems on the forcheck.  They both can be puck hounds and maybe the inspiration of playing with a team as desperate as the Flyers will shake Jarome to his core and make him play his best.

Jarome Iginla has experience, to say the least; in good ways and bad.

He has seen the ups and the downs of playing in the NHL, but has managed playing into his 14th season with Calgary.

Iginla brings another presence that not only has done it before, but thrived.

In the 54 games Iginla has played in the playoffs, he has 49 points and was a huge part of Calgary’s Stanley Cup Finals appearance in 2004.

When Jarome Iginla came into the league, he was thought to be too slow to create his own space and physically, he was too small build-wise.  It was get tough or get out the NHL for Jarome, and he decided to get tough.

Now, he is a force no matter where he is on the ice.  He has learned to pick his spots to fight (Ask Bill Guerin about breaking Iginla’s hand with his face), and finishes his checks with force.

Iginla has learned to clear his space in front of the net for his opportunities and doesn’t take no for an answer.  The idea of Jarome Iginla clearing people out in front of the net at both ends of the ice makes my eyes glow like a child on Christmas.

Jarome Iginla took the “C” in Calgary in 2003-2004.  He then helped lead the Flames to the Stanley Cup Finals that year before losing to a tough Tamp Bay Lightning team.

The Flyers organization is one of the strongest from the top down, and the Flyers don’t need his leadership.  That’s not a negative, but the team is stacked with personalities that don’t mind leading the charge.

With that being said, he’s going to bring his leadership anyway!  His ability to use the energy of the young core in Philadelphia to energize himself will be a big part of the trust he builds and the role he will take as one of the top guys.

Iginla would be another calming force when things got rough and his voice would be welcomed in the Flyers' locker room. 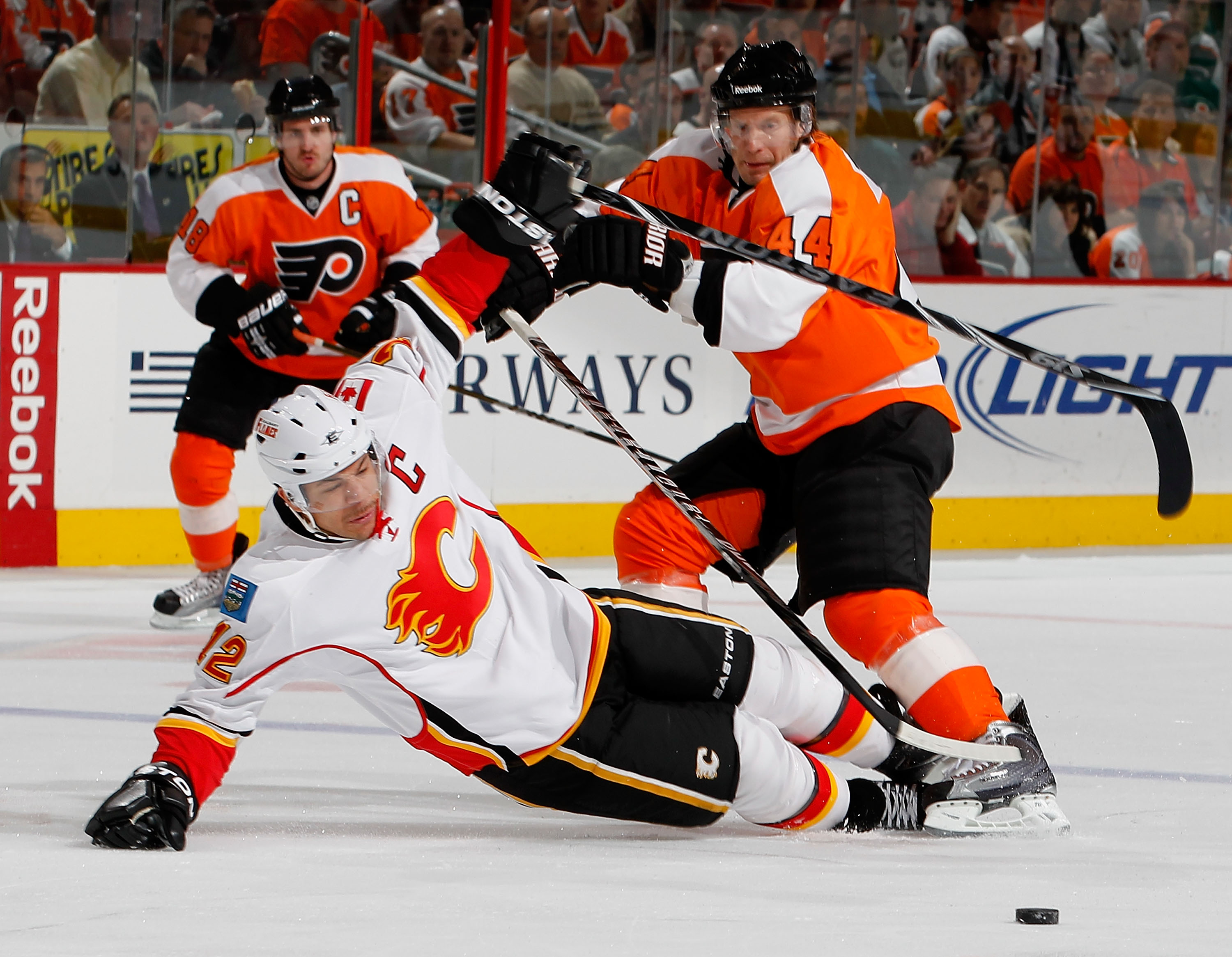 Bad Blood: The 20 Most Hated Players in NHL History (With Video)

NHL Trade Rumors: 10 Deals That Would Be Fun to See Go Down