Mariano Rivera is 3-for-3 in save chances during the 2010 playoffs.

In the 1999 movie Unbreakable, the character played by Samuel L. Jackson explained that the incredible fragility of his bone structure, the reason he was derisively known as Mr. Glass, was directly tied to the fact that Bruce Willis' character was seemingly invincible.

It made Jackson and Willis natural foes, and their relationship served as the crux of one of the last decent movies M. Night Shyamalan made before people started exiting theaters saying things like, "Hey, how long do you think M. Night has been hiding his brain injury?"

I bring this up because if you caught the camera shot of Nolan Ryan after the Yankees rallied to go ahead of the Rangers on Friday night—rotten scowl, arms folded, chin melded to his chest—you know that I was 1,500 miles away with the exact opposite expression.

If you've been caught off-guard by this resourceful, tenacious side of the Yankees, you're not alone. This was a championship-caliber win, the type of victory I never thought this team had in them as recently as 10 days ago.

CC Sabathia gets knocked out of the game after four innings, you expect to lose. Your offense goes silent for six straight innings to begin the game, you figure you have no shot. Fall down five runs, on the road, in a playoff game, you should probably pack it in. And yet, the Yankees will wake up on Saturday morning with a 1-0 lead in the best-of-seven ALCS.

It couldn't have been done without the following people:

Dustin Moseley: The casual Yankee fan sitting next to you at the bar had no idea who Moseley was when he entered the game. Even you may have only known the right-hander as the guy who is (slightly) better than Chad Gaudin. But Moseley's two scoreless innings turned out to be huge for a Yankee team that trailed 5-0 by the time Sabathia was pulled from the game. Moseley was credited with his first postseason victory. It was much deserved.

Brett Gardner: He's gritty, he's gutty, and now he has his signature moment as a Yankee. Gardner's hustle infield single leading off the eighth inning — including poorly thought-out headfirst slide! — seemed harmless at the time, but it became the spark that ignited the Yankees' winning rally. Bonus points are in order for Gardy giving Craig Sager the "You don't expect me to take you seriously?" look throughout his postgame interview.

Derek Jeter: I wrote on Wednesday that I thought that Jeter would rise to the occasion in the ALCS; his usual October brilliance melding with a final opportunity to gain leverage in upcoming contract negotiations. So far, so good for Jeter, who doubled twice in Game 1. His first two-bagger drove in Gardner, sending New York's classic rally into overdrive.

Alex Rodriguez: A-Rod was having a night to forget until the top of the eighth (0-for-3, error), when his bases-loaded double quieted the Arlington crowd and drew the Yankees within one run. It was type of hit that Rodriguez regularly delivered during the 2009 postseason, and it proved No. 13's flair for the dramatic remains intact.

Ron Washington: I don't want to be too hard on Washington, who was betrayed by his bullpen and probably would be a great dude to listen to old jazz records with. But his decision not to turn to Neftali Feliz as the game unraveled in the eighth was ripe for first-, second- and third-guessing. Having a lefty come in to face Marcus Thames in a tie game wasn't the wisest move, either.

Ian Kinsler: Can't get picked off there, bro. Just can't happen. This is the playoffs, meat. 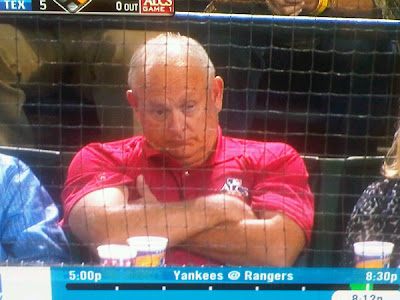 President George W. Bush: In fairness, Dubya wasn't really to blame for the Rangers' mess, but his attendance at the game did lead to the tweet of the night by ESPN the Magazine senior writer @jorgearangure: "I bet George W Bush authorized a sign that read "Mission Accomplished" after the 7th inning." Ouch.

Mariano Rivera: You can gauge how big a win is by how Mo reacts after getting the final out. In this case, it was both a passionate fist pump and shout. That's a 9/10 on the Mo Scale. Allowing the leadoff single to pinch-hitter Mitch Moreland led to some tense moments, but Rivera got it done like he has so many times before. Beating Michael Young and Josh Hamilton to end it was no easy feat, the G.O.A.T. just made it look that way.

Dan Hanzus writes the Yankees blog River & Sunset and can be reached at dhanzus@gmail.com. Follow Dan on Twitter @danhanzus.

The Yankees Are Terrible Right Now

The Yankees Are Terrible Right Now