NFL Now or Never: 10 Players Who Need a Good Week 5 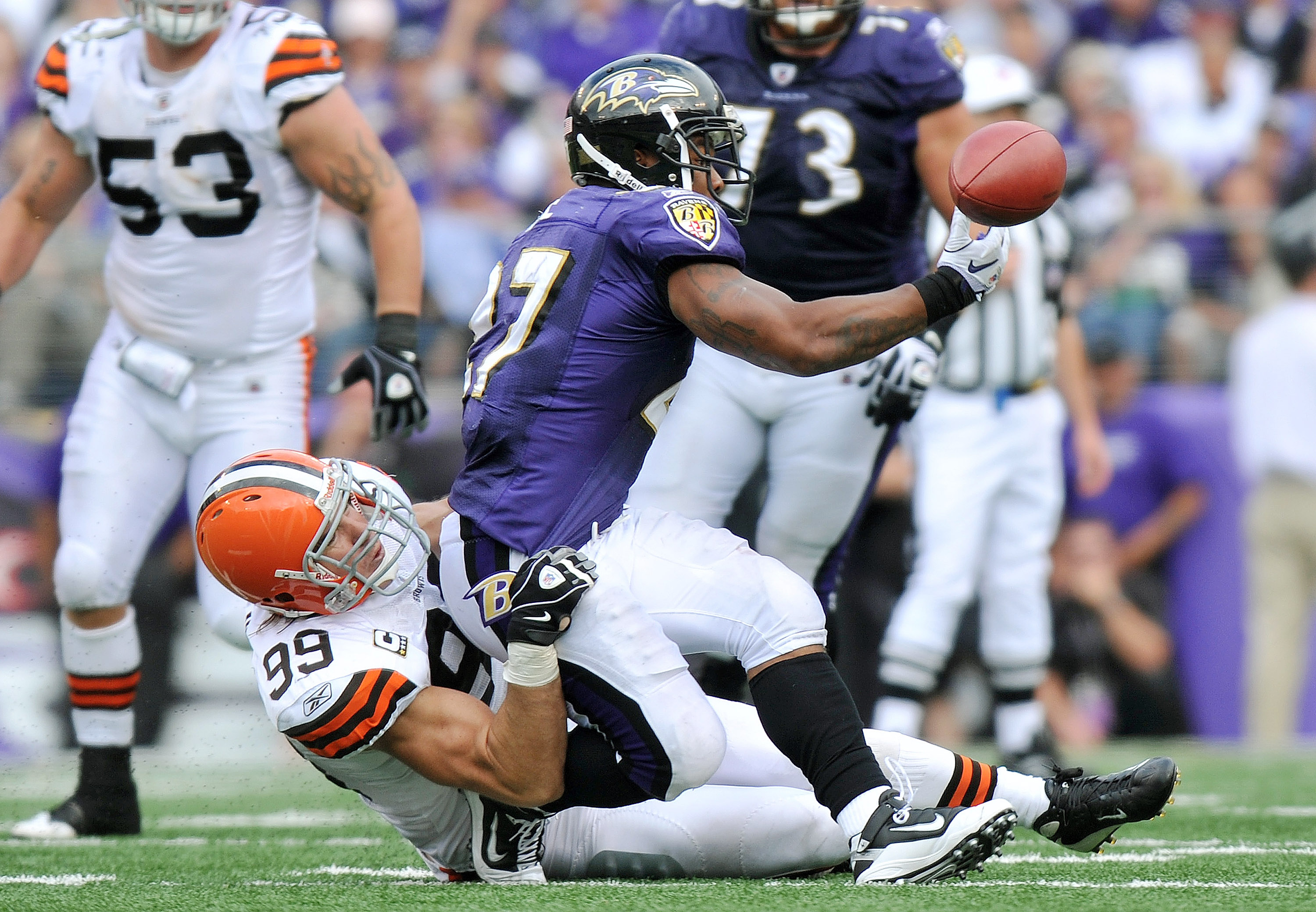 With Week 5 descending upon the NFL, there are those who have performed above what was expected of them (see Arian Foster) and there are plenty who have yet to show off a good week.

This far into the season it becomes dangerous to rack up the bad weeks, as you risk your team missing out on a precious win, or worse, getting benched.

Here are 10 players who need to step up this week before the murmurs turn into shouts, and people start calling for their heads. 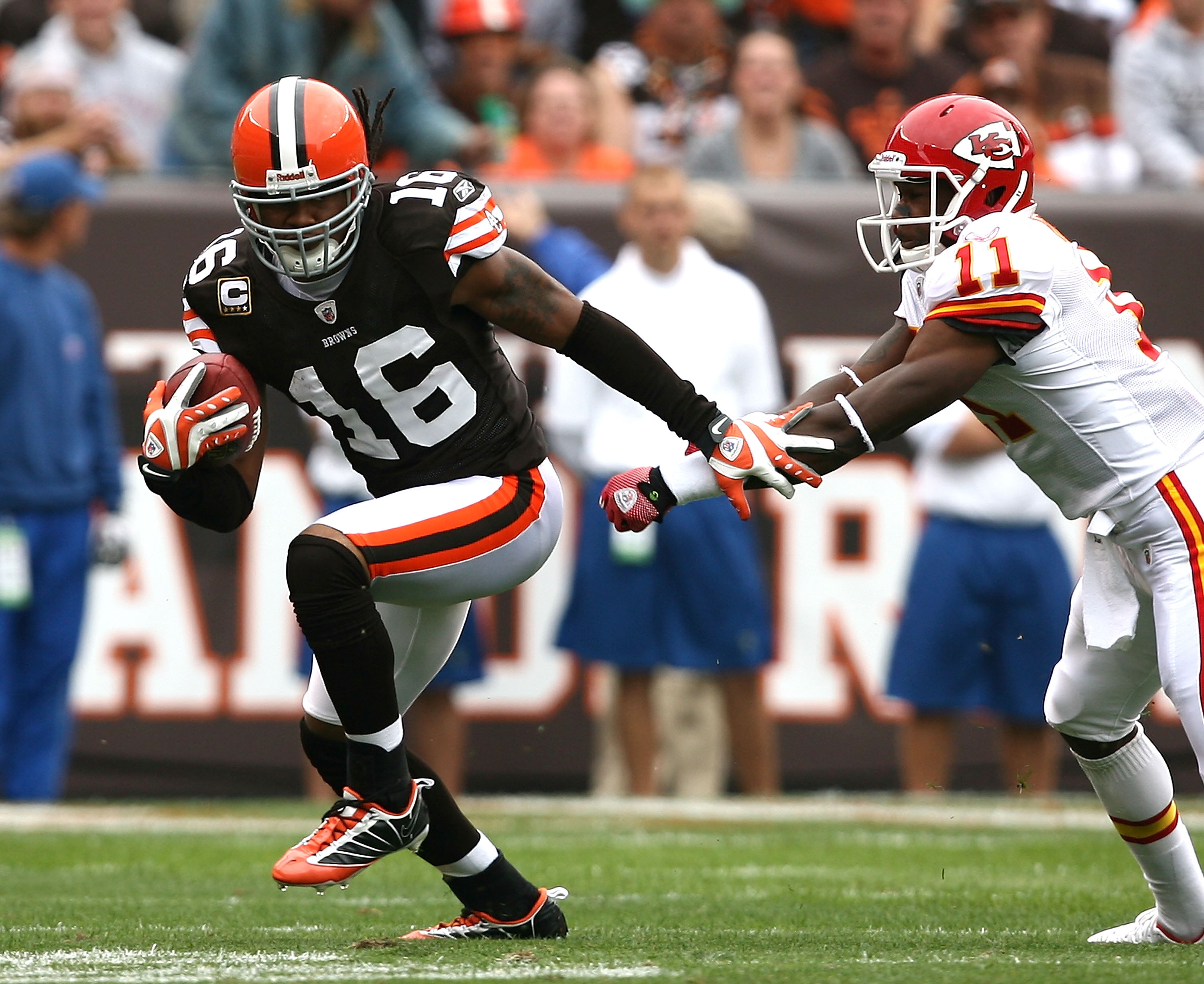 Could it be that opposing kick return teams have finally figured out how to stop Cribbs from running wild in the return game?

His longest kick return this year is 27 yards, pretty much his career average, and his longest punt return of the year is only 15 yards.

It could be that one of the best special team guys in league history has finally been figured out, but I still wouldn't sleep on him. 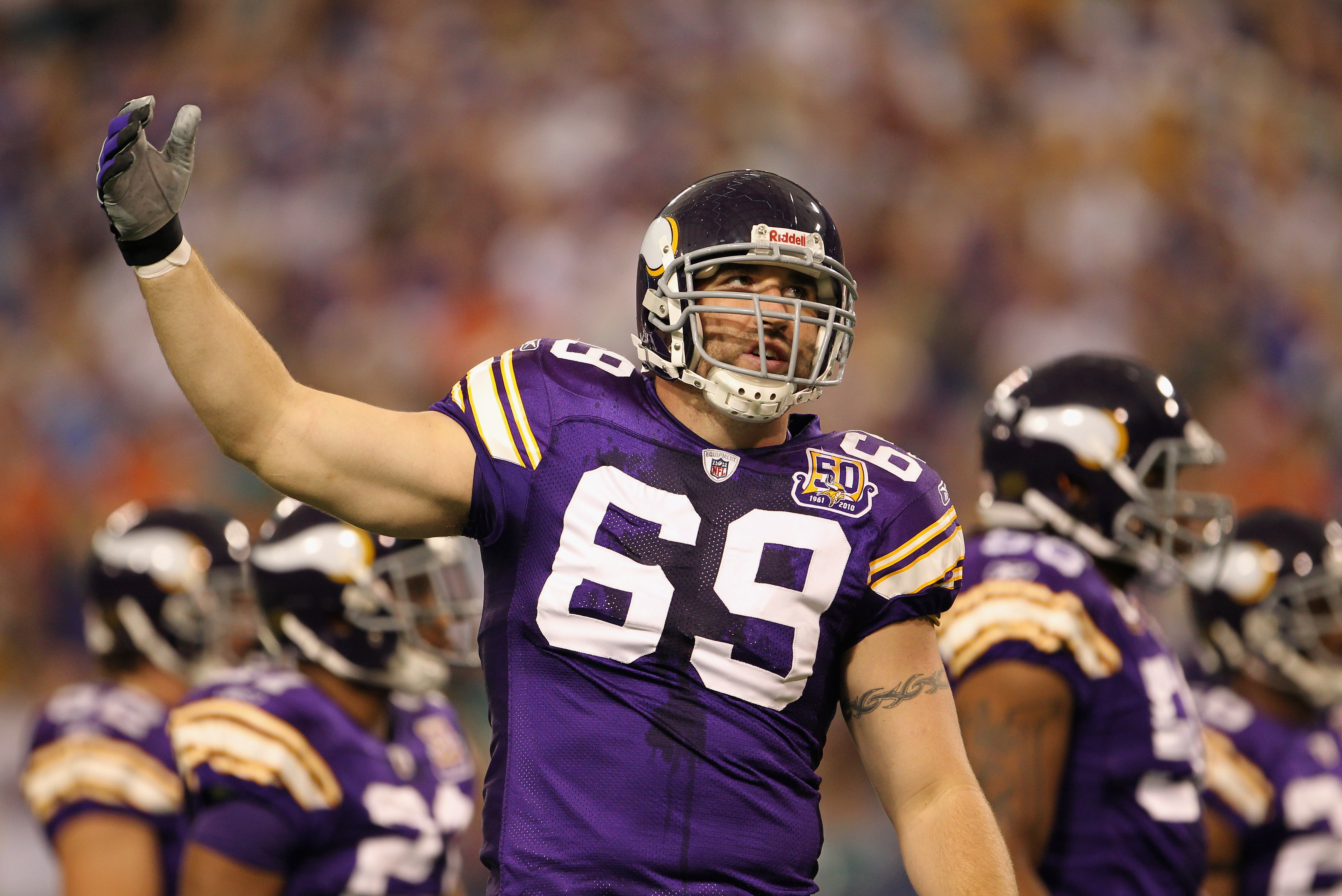 OK, so the Vikings defense has been excellent against the pass so far this year, with only 189 yards per game allowed, but where is the thrilling and exciting pass rush of Shock and AWE from last year?

After annihilating quarterbacks with a staggering 31 sacks last season, the Vikings dominating starting defensive line has a combined two sacks this year.

Jared Allen, Pat Williams, Kevin Williams, and Ray Edwards, after being such a dominating force a year ago, have had very little of the excitement and electricity of last season. 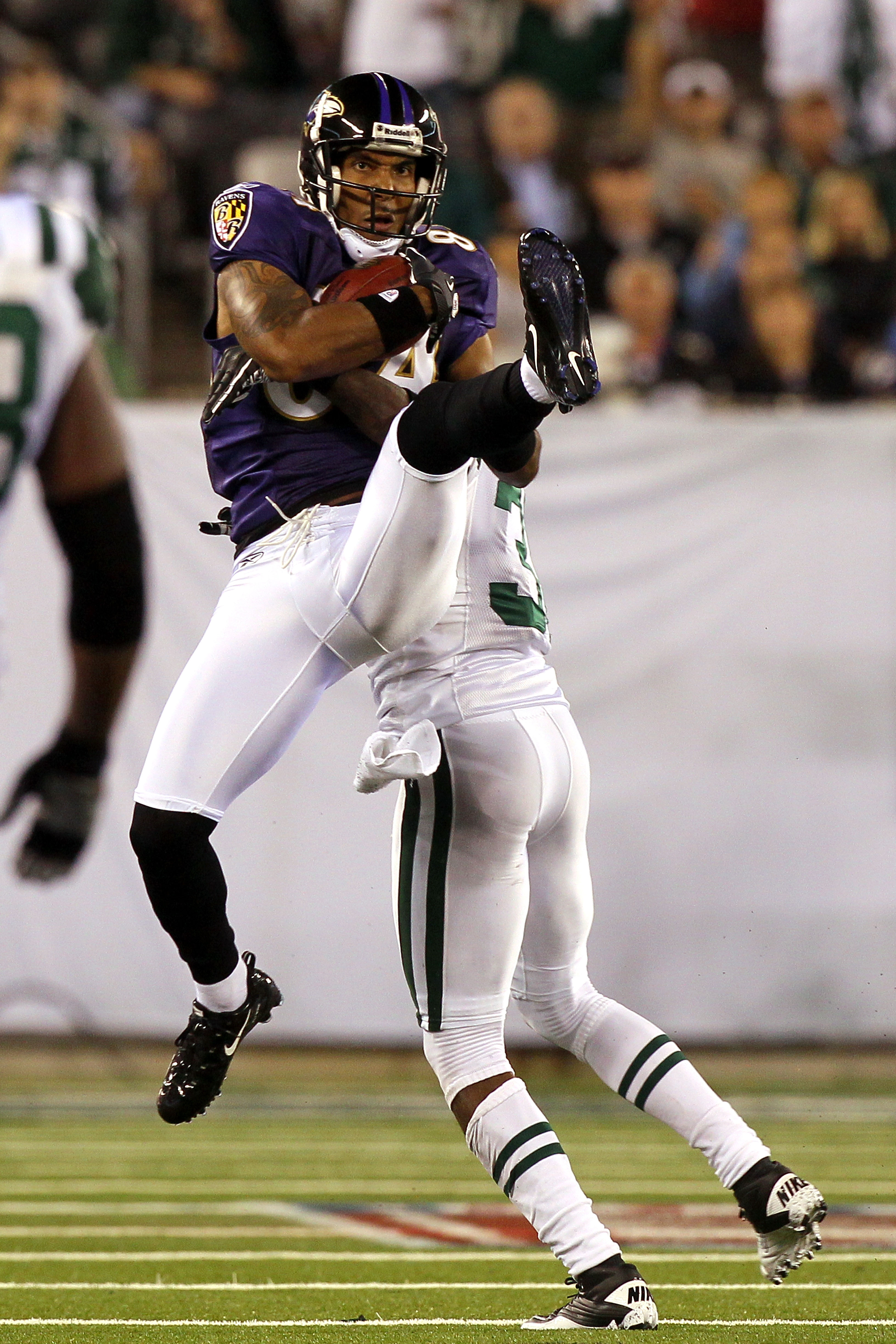 We all remember when Houshmandzadeh was the pass catching machine for Cincinnati in 2007 with 112 receptions and 12 touchdowns. Now, I kind of forgot that he was even still in the league.

In four games this year he has five catches for 80 yards, not exactly near what he has put up in the past.

Even in obscurity with Seattle last year he caught 79 passes for 911 yards. So it's not as if he has been in a steep decline for years now.

With Baltimore seemingly in a two-team race for now (unless Palmer can return to old Palmer form, then it's anybody's game in the AFC North) and Ray Rice slacking a bit, Housh needs to be the man he was in the past to help his team gain a playoff spot. 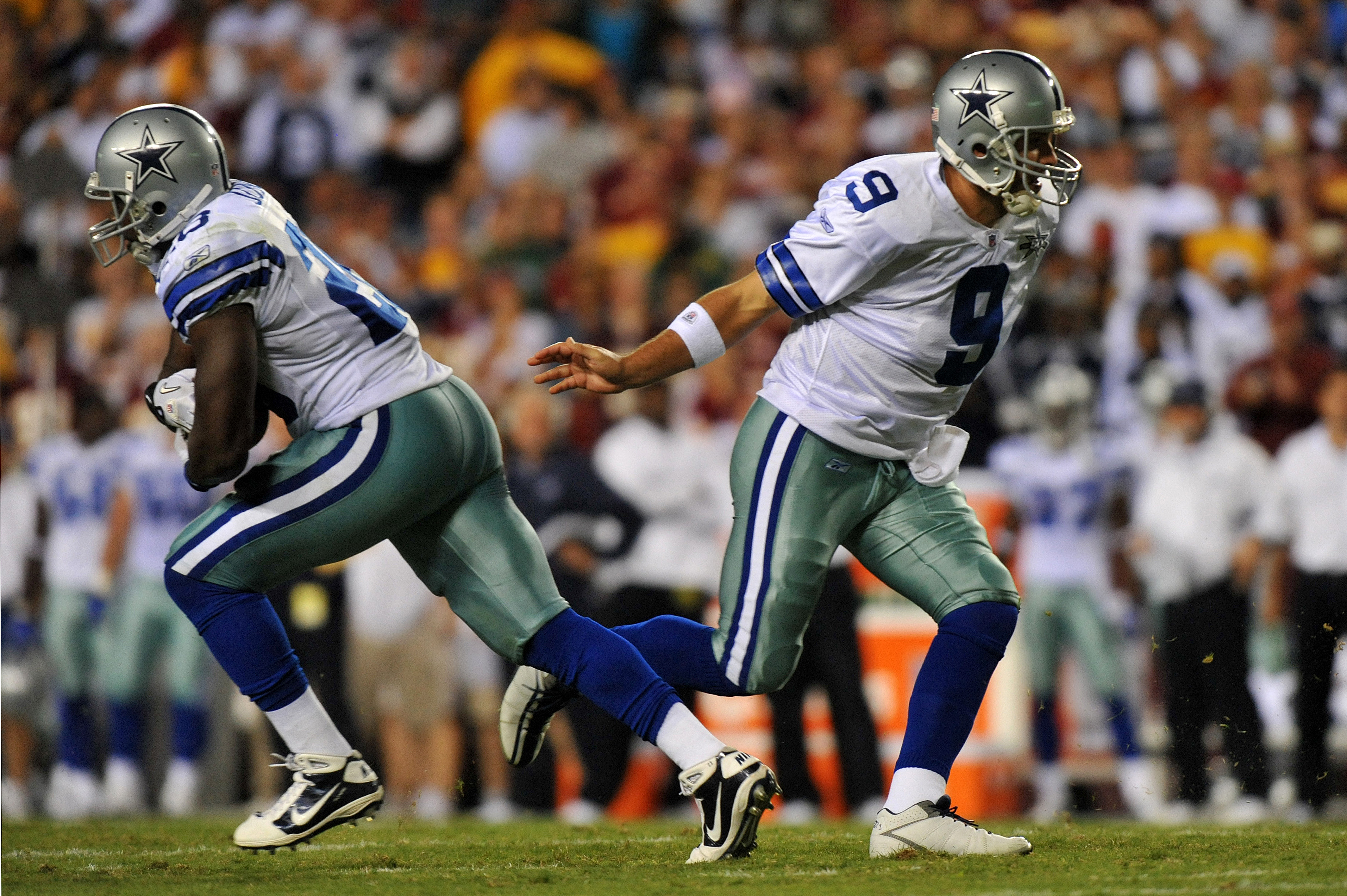 The Dallas rushing game has been out of sync to say the least so far this year.

The team ranks 26th in yards per attempt this year with a measly 3.5 per.

If they don't find a way to start running the ball like they did last year, each win could be a struggle for this Cowboys team, and they could find themselves on the outside looking in come playoff time. 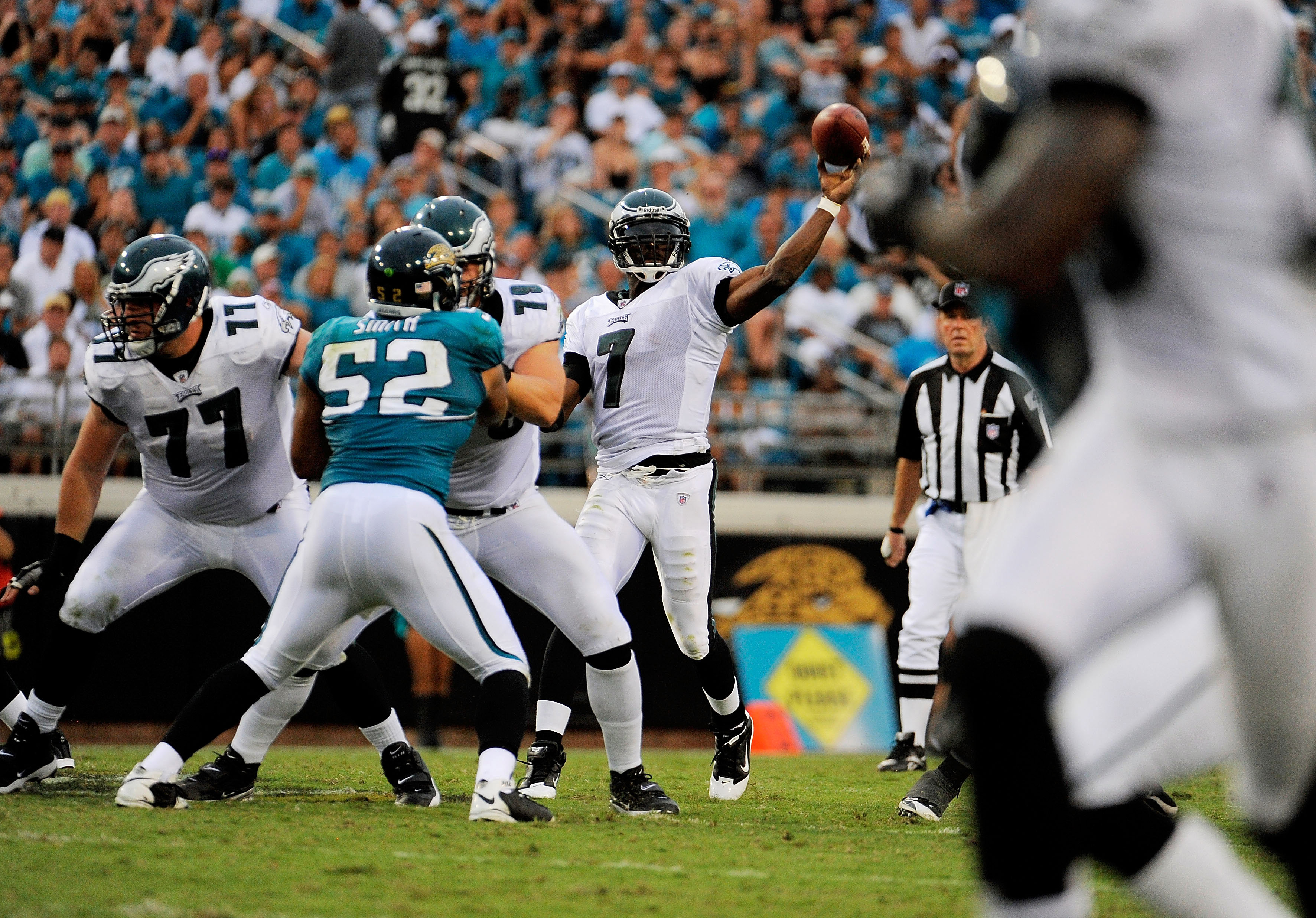 Seriously guys, your team has had every opportunity to take off in this division and you're racking up more sacks than a potato factory.

If it wasn't for the Bears O-line, which looked absolutely helpless against the Giants while allowing 10 sacks Sunday night, Philadelphia's line would be in first, with 15 allowed in four games.

The bad news, the Eagles have two games to play against those same Giants who manhandled the Bears.

Even worse news, their quarterback already has one concussion under his belt this season, and another could be a huge blow to the team.

The worsetnews, their other quarterback is out with bruised ribs, and if he comes back to the lineup still sore and gets hit hard, it could be bad news to his breakout season.

So un-sack up Eagles O-Line, unless you want to have Mike Kafka to protect for the rest of the season. 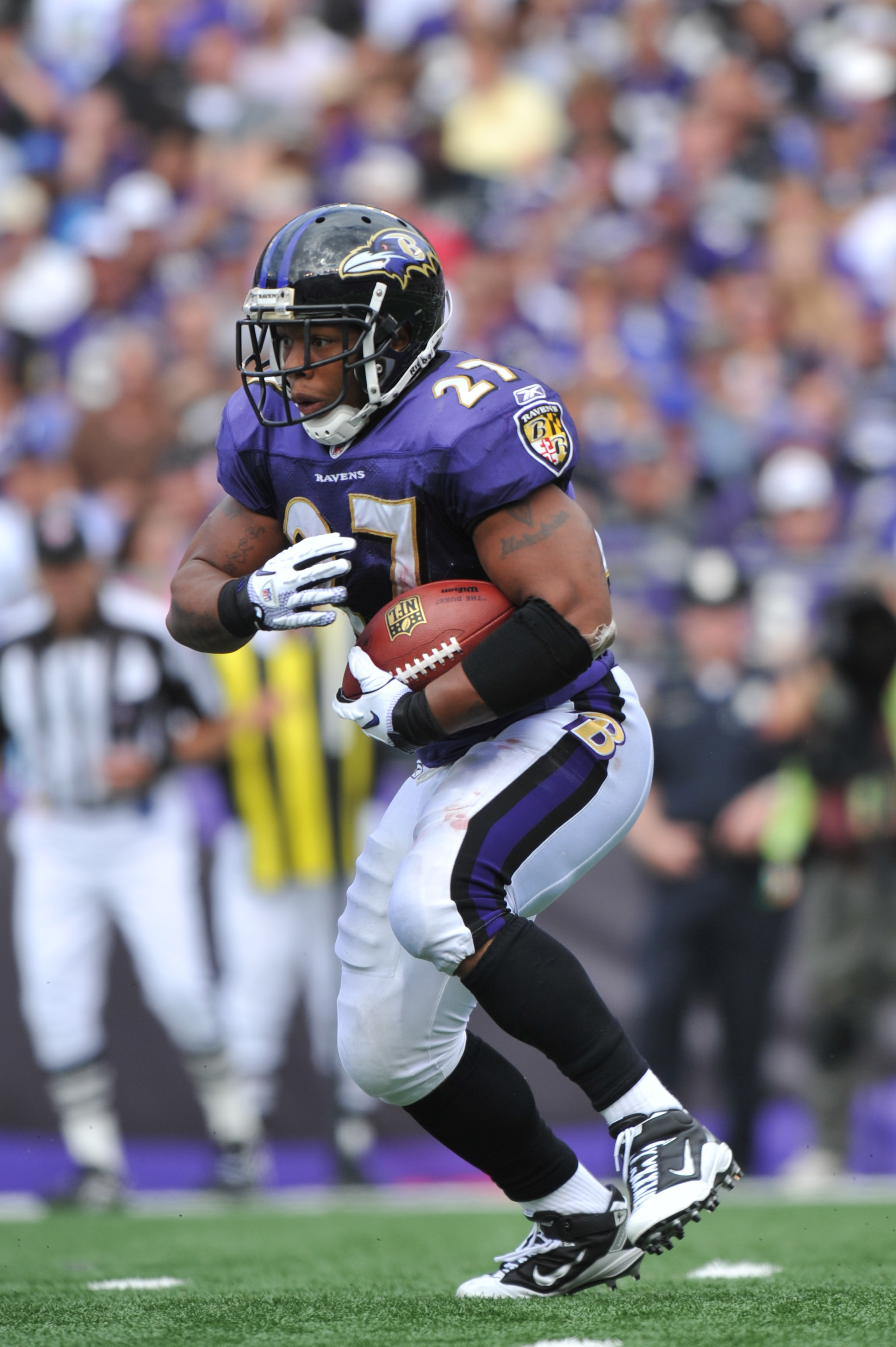 The little running back in Baltimore is having a tough year so far.

He suffered a bruised knee two weeks ago against the Browns and last week was limited to only 20 yards on eight attempts.

Rice has yet to surpass 100 yards rushing in a single game and, after his breakout year last season has been a pretty big disappointment.

Rice is averaging just 3.8 yards per carry and has no touchdowns, rushing or receiving, so far this year.

If he isn't careful, he could end up splitting even more time with veteran Willis McGahee. 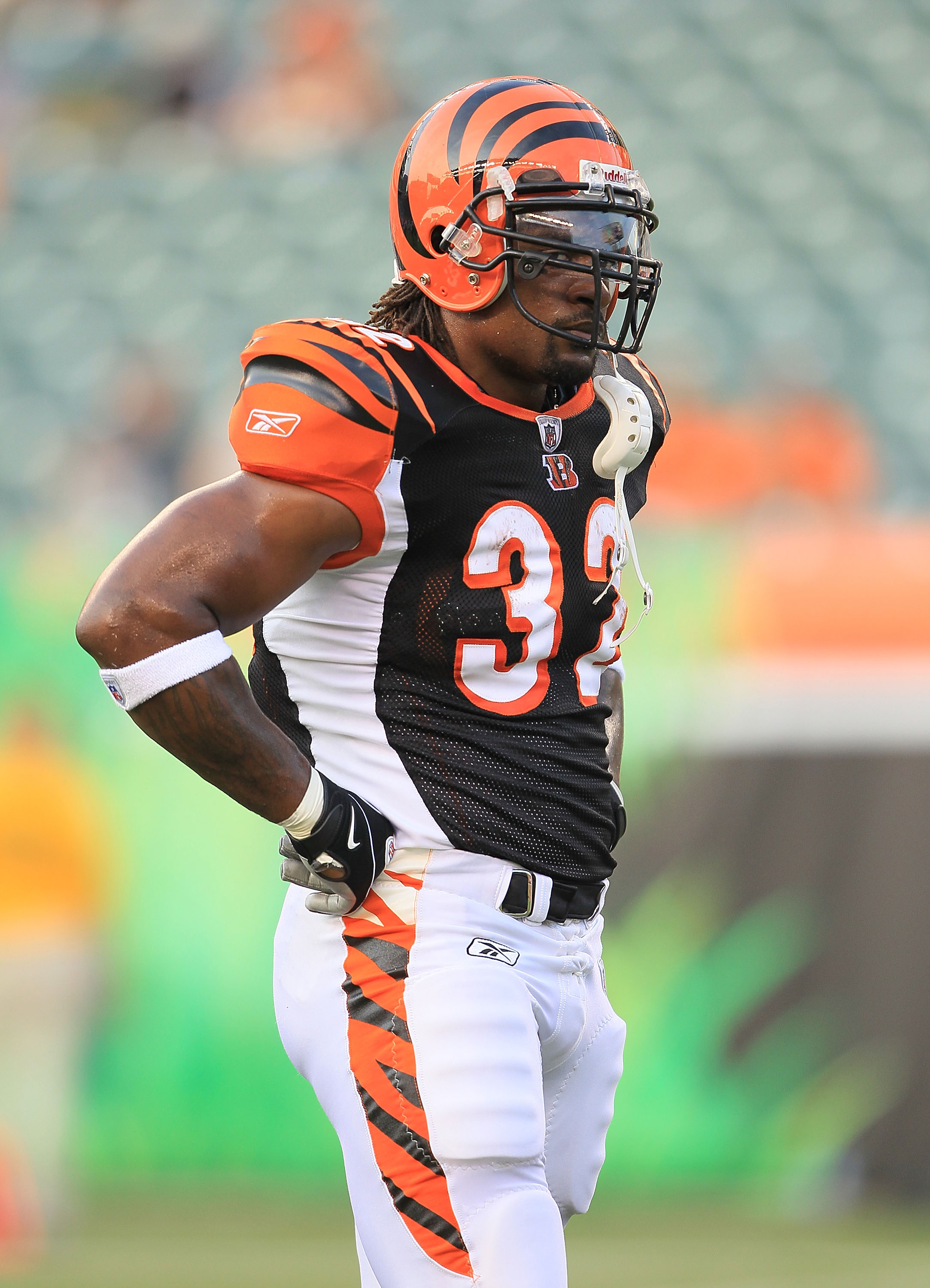 Benson is another AFC North back like Ray Rice who has been underwhelming this season.

After a breakout last season, Benson is averaging 3.3 yards per carry, yet he is still getting the ball 20 times per game.

He has a longest run of only 13 yards this year and has almost no receiving yards to speak of.

Benson is a huge part of the Bengals getting back on track offensively.

He has recently complained that he isn't happy with the way the offense is being run, but until he starts picking up his production, he can't really complain too much. 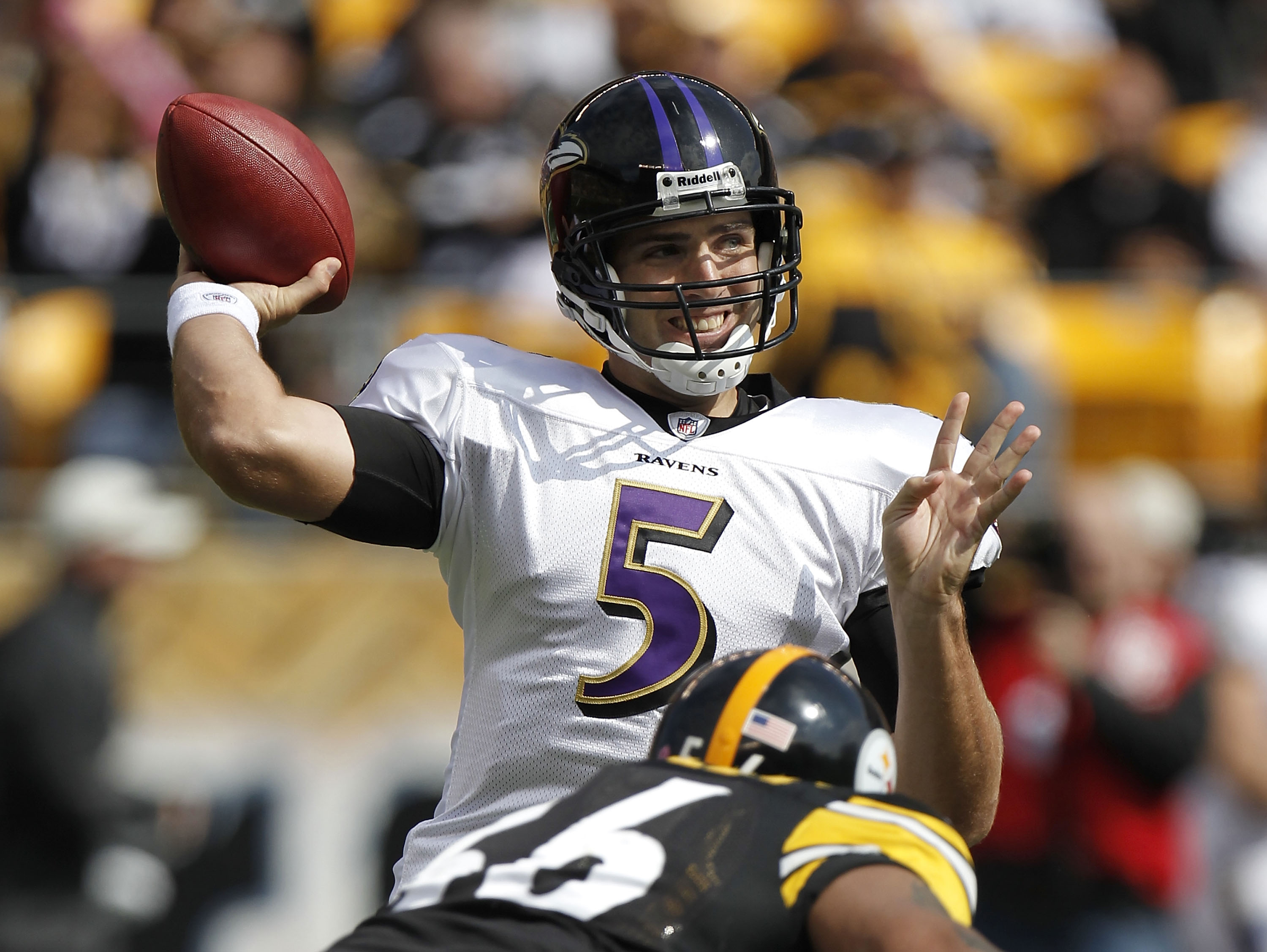 Joe showed last week that he could still lead his team on a game-winning drive, as he threw a touchdown to beat the Steelers with 34 seconds left in the game last week. Otherwise he has been pretty underwhelming.

Despite the offensive struggles of the team this season they are still 3-1, and in true Ravens fashion have relied on their defense to win games.

But who knows how long they can keep that up and still win games. 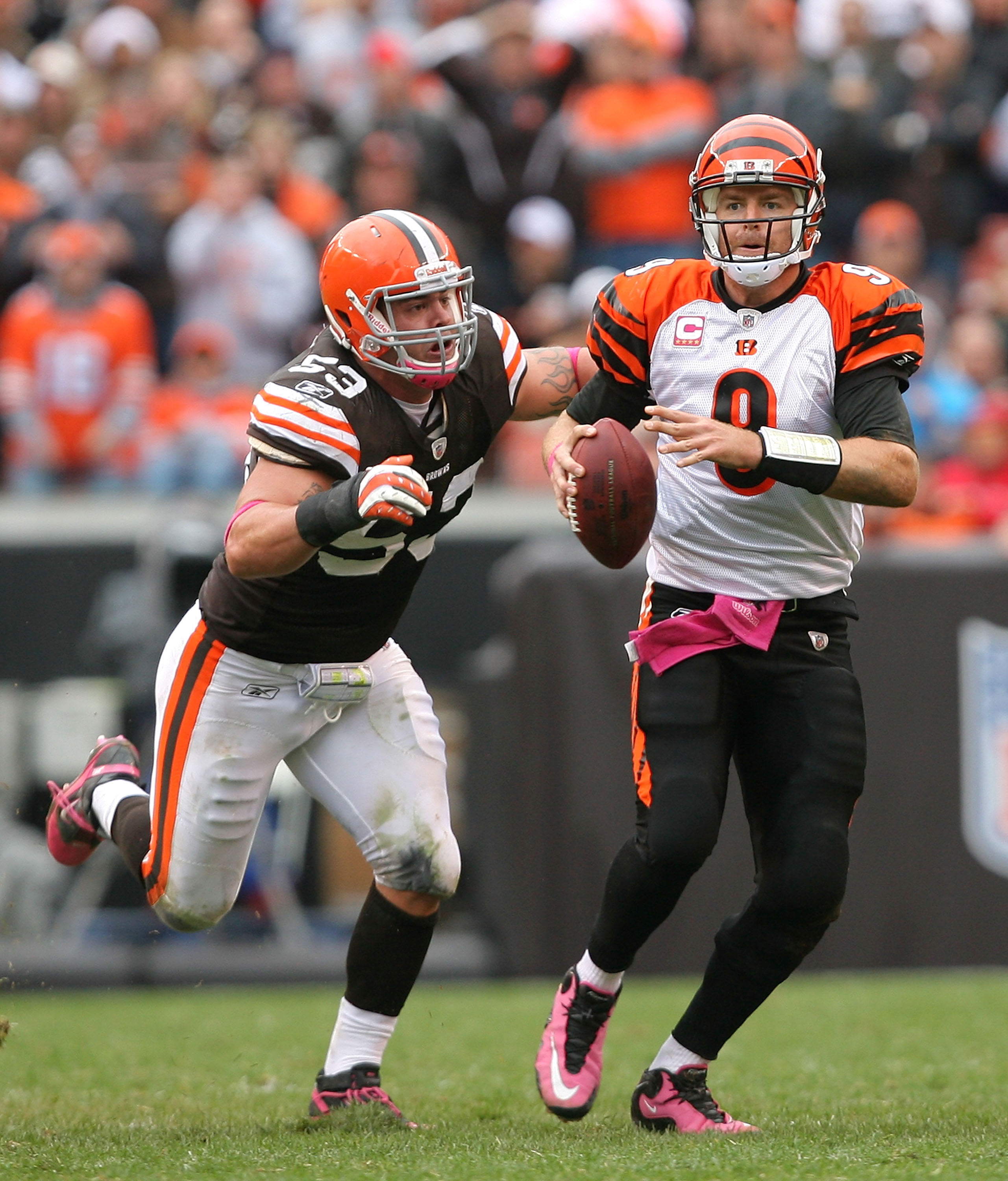 The Bengals made the playoffs in 2009, which masked many of the struggles that Carson Palmer encountered. He posted his fewest passing yards, touchdowns, lowest completion percentage,and lowest QB rating since his rookie year (not including 2008 in which he had a torn elbow ligament).

The main reasons the Bengals made the playoffs last year was a weak AFC North—which they went 8-0 against—a surprisingly good defense that allowed only 18.1 points per game, and their running game, which surpassed the 2,000 yard mark.

This year, their defense is still working for them, but Cedric Benson is playing nowhere near the level that he played last year and the Steelers and Ravens are 3-1 and they just lost their first division game with Palmer in the lineup since the first week of 2008.

It's time for Palmer to step up, or people in the Queen City could start calling for his head. 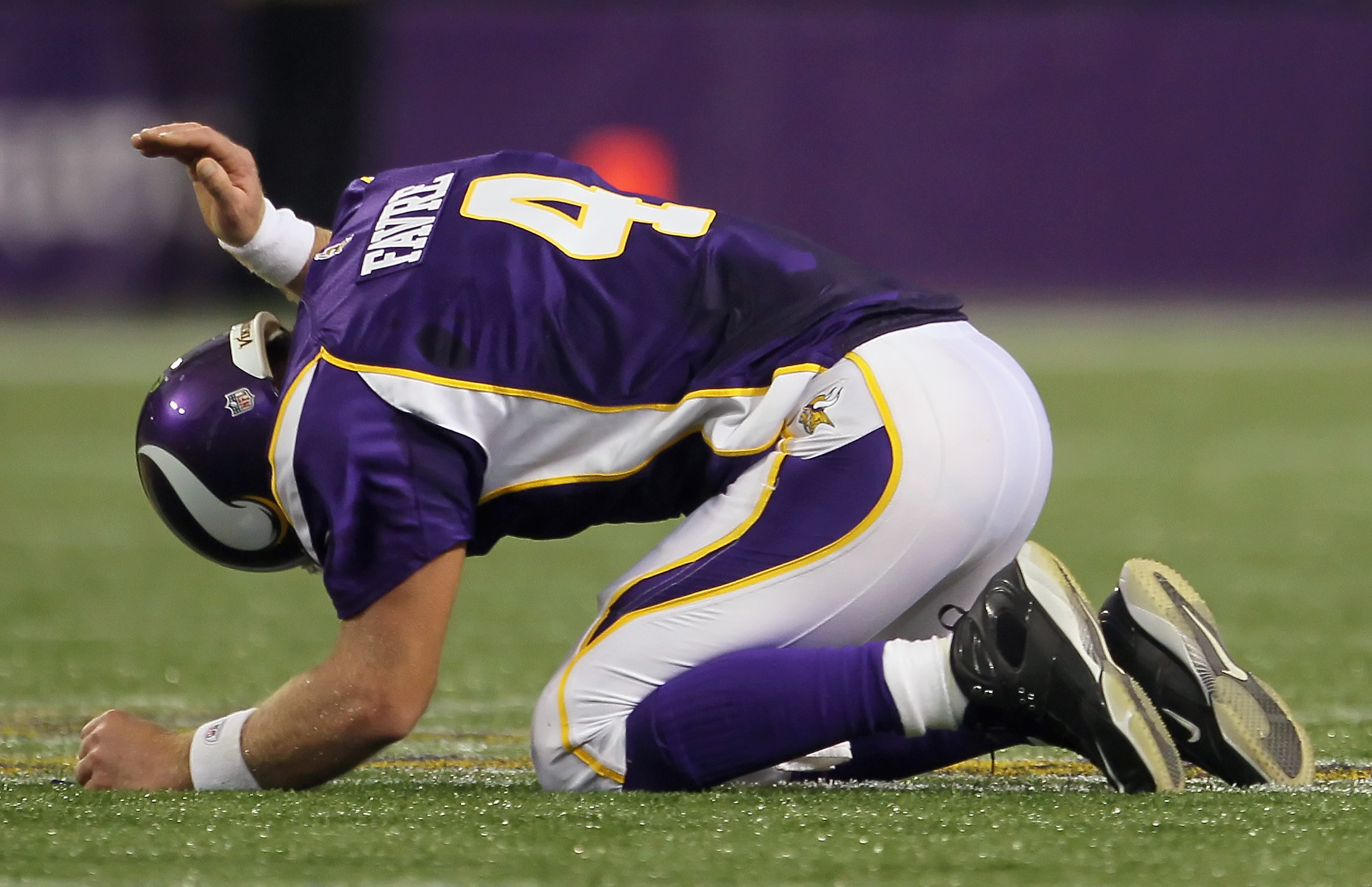 It's time for Favre to either put up, shut up, or retire.

He has been an absolute disaster thus far for the Vikings, with only two touchdowns and six interceptions. This is not the guy they thought they were bringing into Week 1 this year.

His shortcomings are forcing Adrian Peterson to rush for 130 yards a game just to keep them in each game. And with the Bears and Packers both looking to build upon their impressive starts, more bad news arises for the Vikings, who sit at just 1-2.

With the addition of another target in Randy Moss, Favre may be able to shake off the old man rust, because if not, it may be time for him to find another reason to retire.