Mike Lowell Receives Red Sox Send Off: A Look Back on His Storied Career 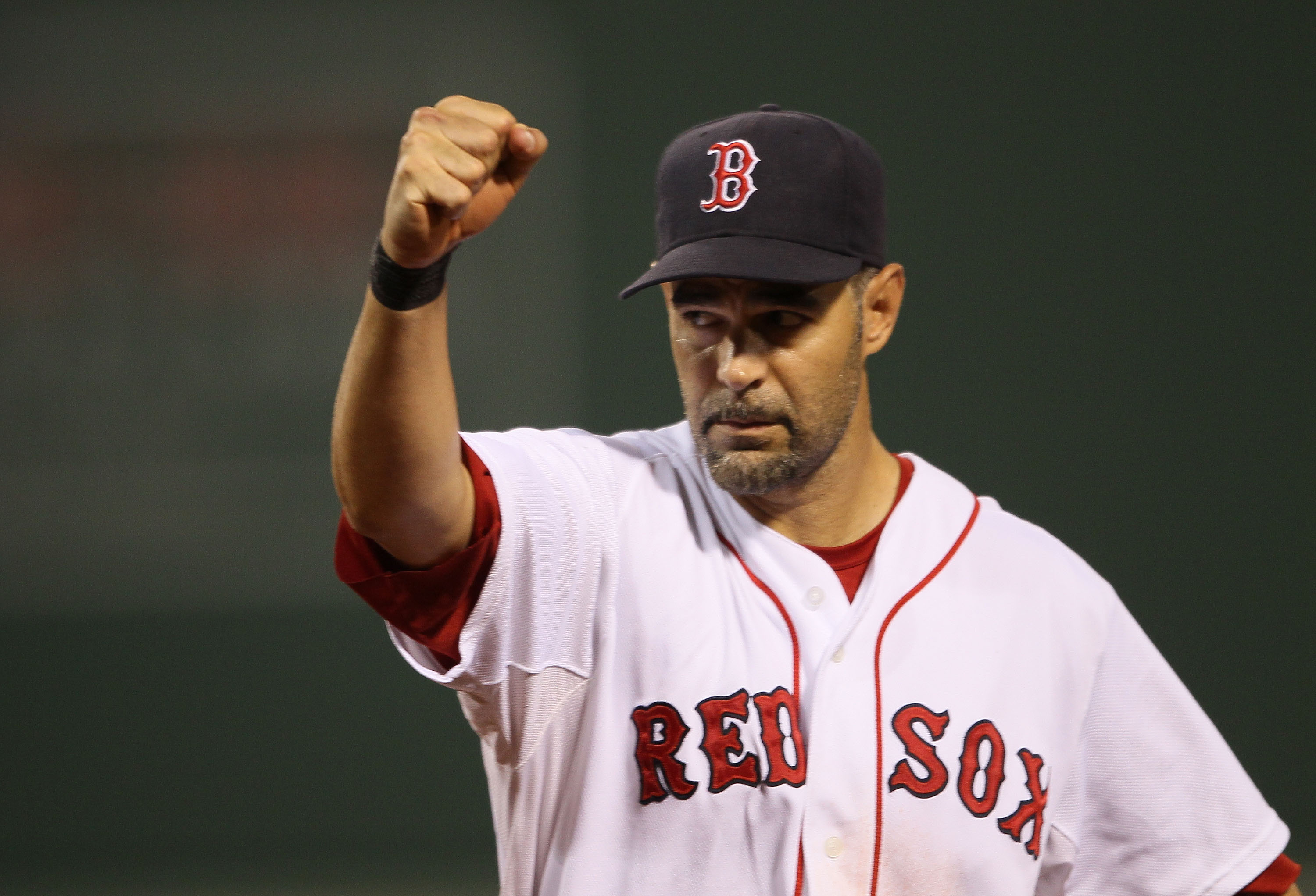 Mike Lowell will be honored tonight by the Boston Red Sox with "Thanks, Mike Night", as we say goodbye to the consummate professional after 13 remarkable seasons. Lowell has announced that he will retire at the end of this season.

It's been a tumultuous year for the once slick-fielding third baseman. Lowell has been on the verge of being granted his outright release multiple times throughout the season, and has had to endure being relegated to the bench for the first time in his career.

But good things come to those who wait, as Lowell will finish his major league career this weekend against the New York Yankees as the Red Sox starting third baseman. Adrian Beltre, Boston's regular third baseman and Lowell's replacement in 2010, has left the team to witness the birth of his third child.

So with Lowell at the plate and bat at the ready, let's take a look back at the career of one of the most humble athletes to every play the game.

Mike Lowell, we honor you. 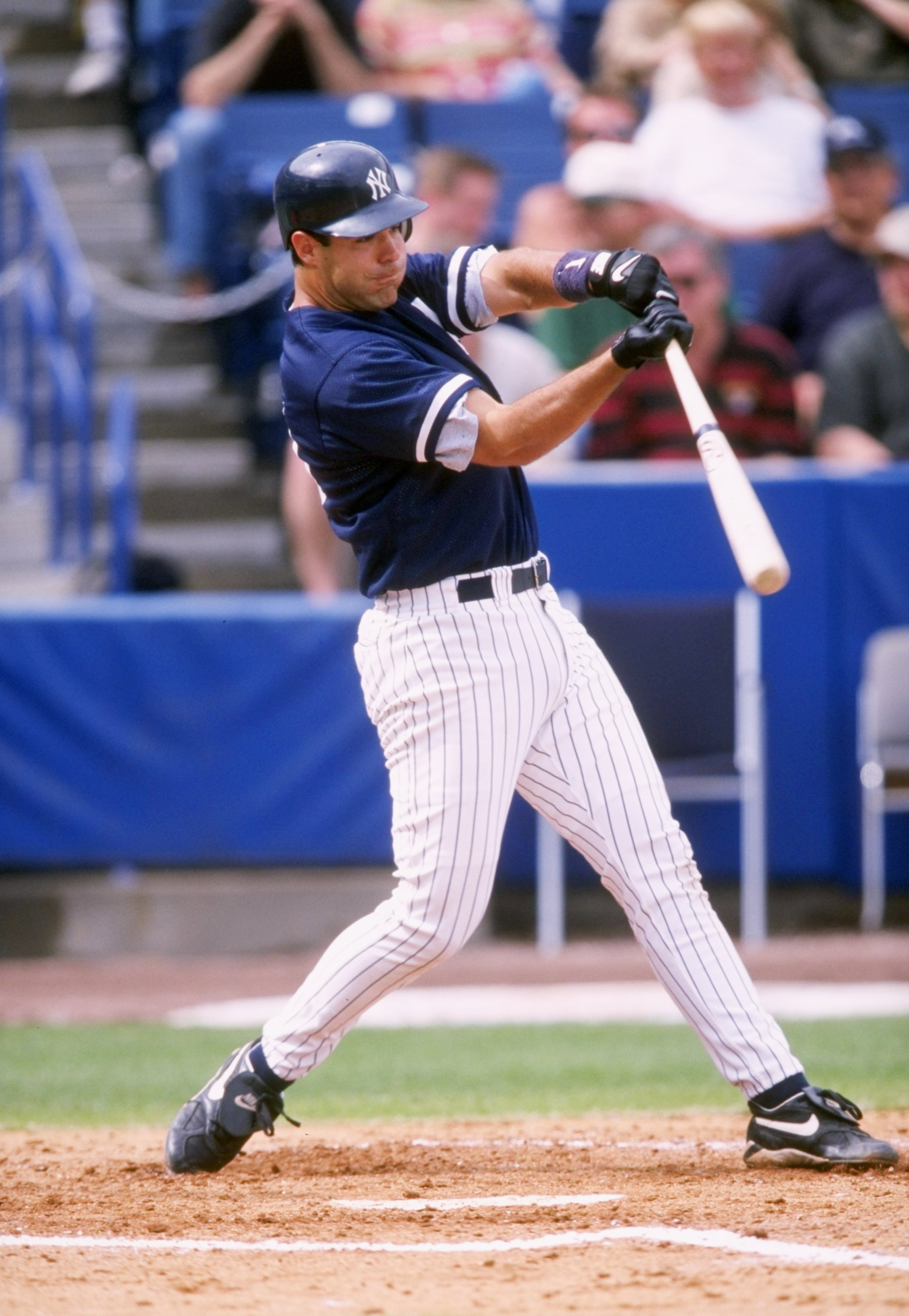 Mike Lowell was drafted in the 20th round of the 1995 MLB Draft by the New York Yankees out of Florida International University, where he was a three-time All Conference player.

He toiled away in the minors for a few years before finally making his big league debut with New York in 1998 as a wide-eyed 24-year old. He singled in his first at-bat and played eight games that season, but was stuck on the depth chart behind someone named Scott Brosius (though he still got a World Series ring).

So the Yankees traded him in the offseason to the Florida Marlins for the pu-pu platter package of Todd Noel, Mark Johnson and Ed Yarnall.

It would become one of the worst trades in Yankees history.

Not The Ball He Was Hoping For 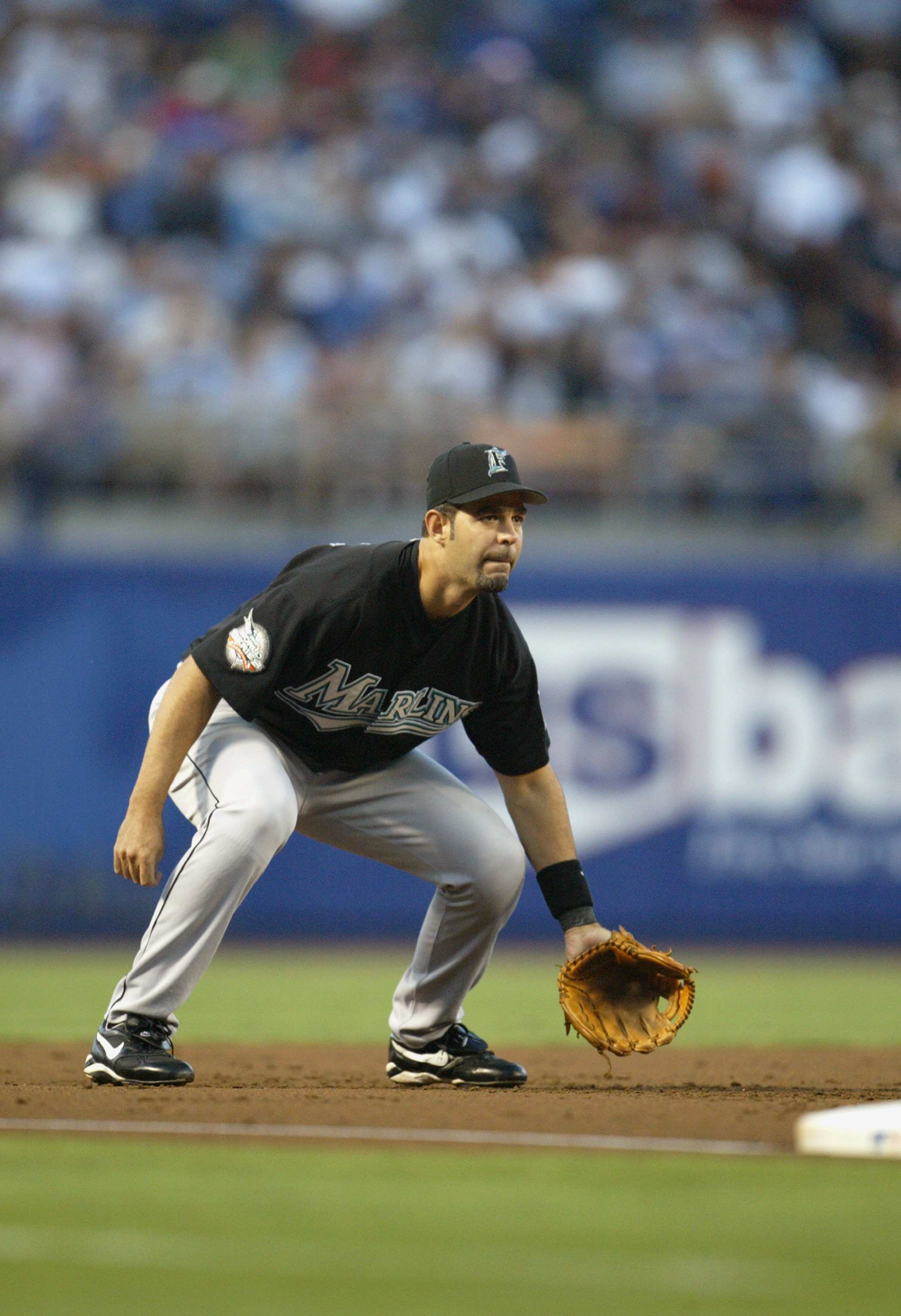 Lowell's career with the hapless Marlins got off to a terrifying start.

Just a few days before spring training, Lowell discovered that he had testicular cancer. He had surgery on Feb. 21 and missed the first two months of the season.

Still, Lowell managed to hold his own.

Despite only playing in 97 games, Lowell managed to hit 12 home runs and drive in 47. He batted .253 with a .419 slugging percentage as he cemented himself as a regular in the Florida lineup.

It's Pretty Nice In Florida 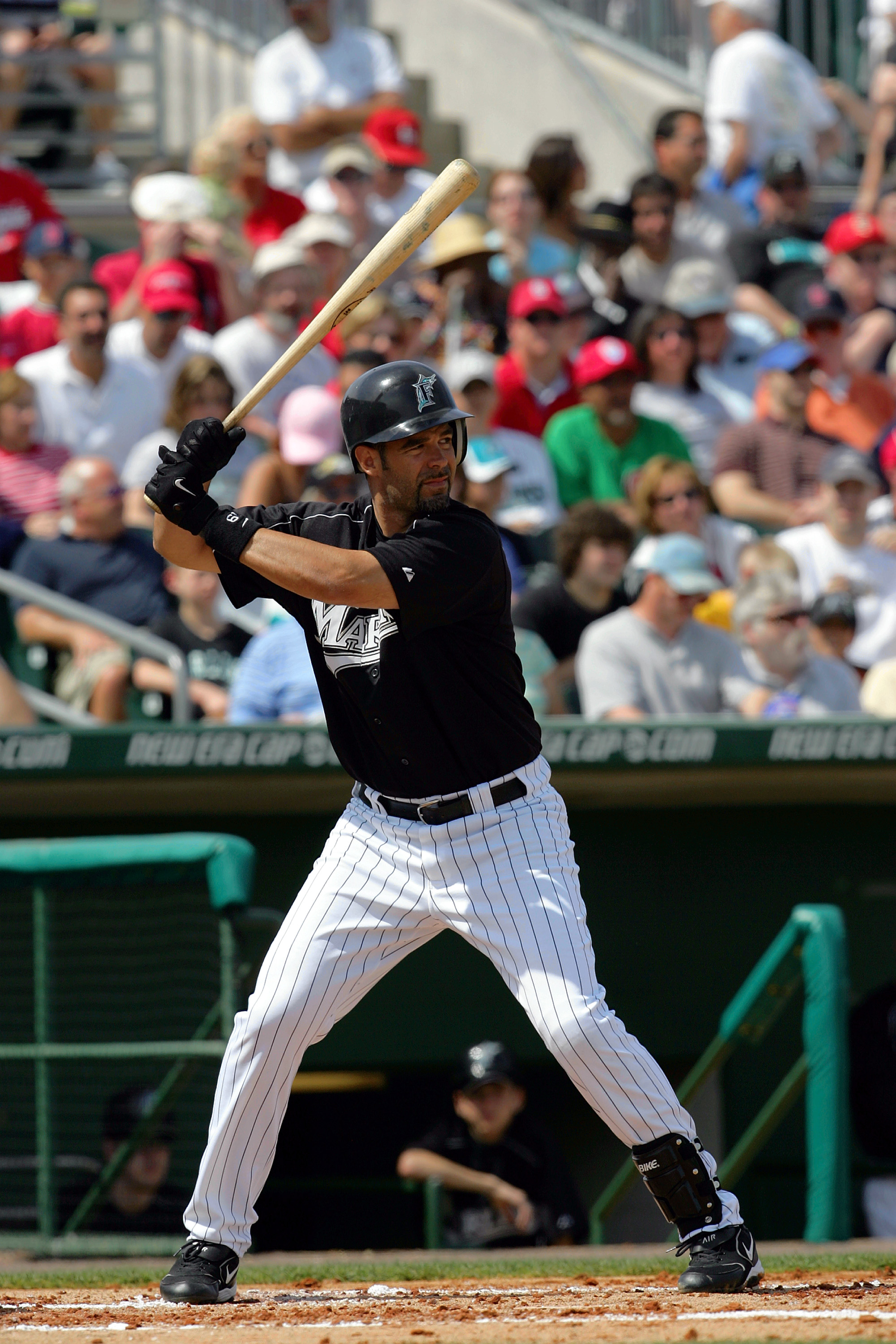 Lowell's career finally took off after the shortened 1999 campaign.

His success continued and in 2003 he had his best season ever.

Despite missing 30 games because of a broken hand, Lowell still managed to slug 32 homers with 105 RBIs and an .881 OPS. Lowell made the NL All-Star team for the second time that season and finished 11th in MVP voting.

He also won his first, and only, Silver Slugger award as he helped lead Florida to their first World Series championship.

The Marlins rewarded Lowell with a four-year, $32 million contract that offseason. 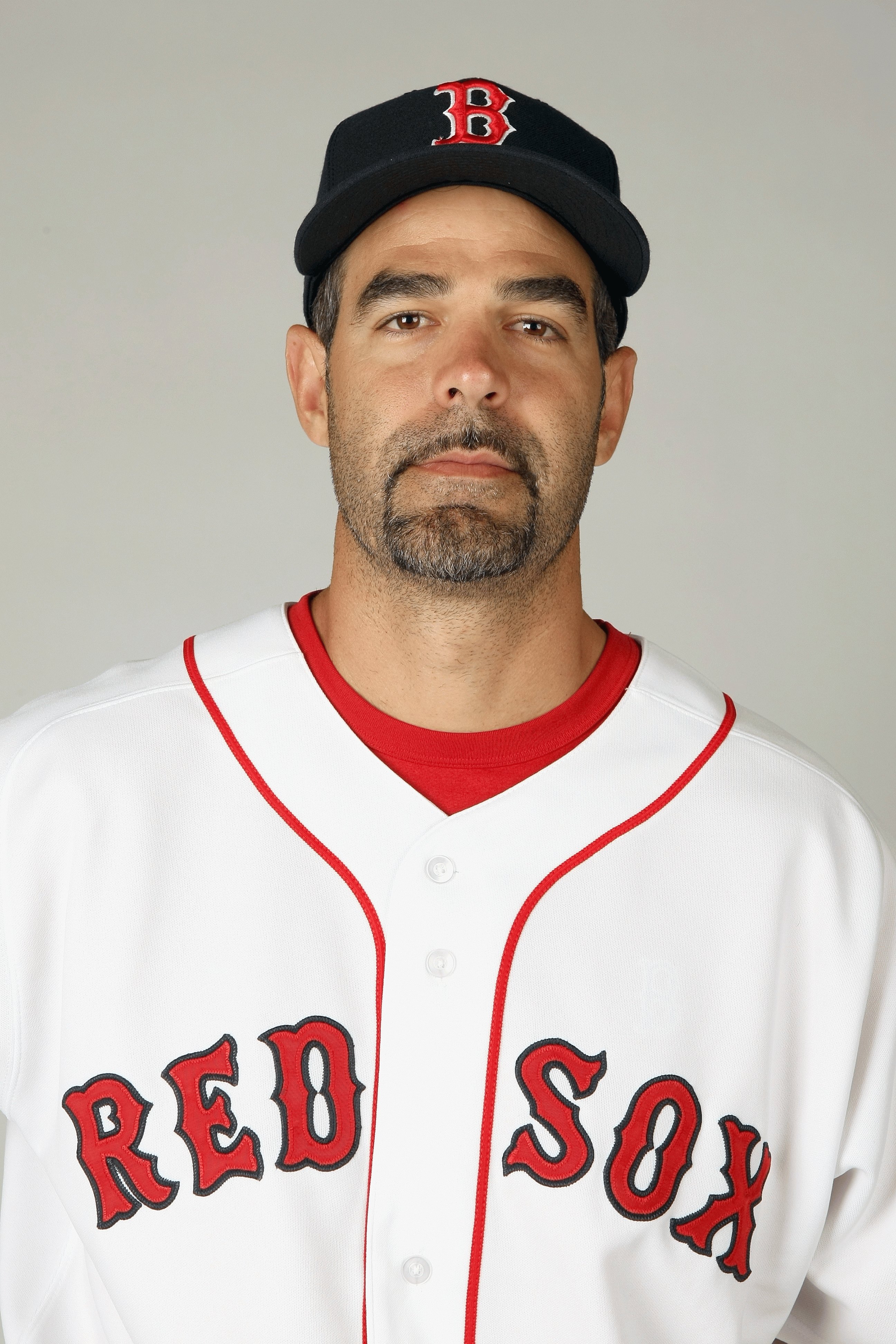 The Marlins thought they were getting one of the game's best third basemen for a good value. Mike Lowell thought so too. Unfortunately, neither party was right.

Lowell followed up his 2003 campaign with another stellar season in 2004, and another All-Star selection. But in 2005 Lowell couldn't have hit a beach ball if it was sitting on a tee in front of him.

His power completely disappeared. He finished the year with only eight bombs and struggled to get the ball out of the infield all season, managing only a .360 slugging percentage. The only thing he did do well was field his position, winning his first Gold Glove.

The financially strapped Marlins, who still owed Lowell $18 million through 2007, panicked and tried desperately to get Lowell off the payroll. That offseason they found a trading partner in the Boston Red Sox.

In one of most heavily debated trades in recent baseball history, the Red Sox sent future franchise player Hanley Ramirez to Florida along with Anibel Sanchez, Jesus Delgado and Harvey Garcia in return for Lowell, Josh Beckett and Guillermo Mota.

The trade was essentially Ramirez for Beckett, with Lowell thrown in as a salary dump. Red Sox GM Theo Epstein, who was on hiatus at the time of the trade, never wanted to trade away Boston's best prospect in Ramirez. Neither GM wanted Lowell.

But much to everyone's surprise, Lowell wasn't nearly done yet. 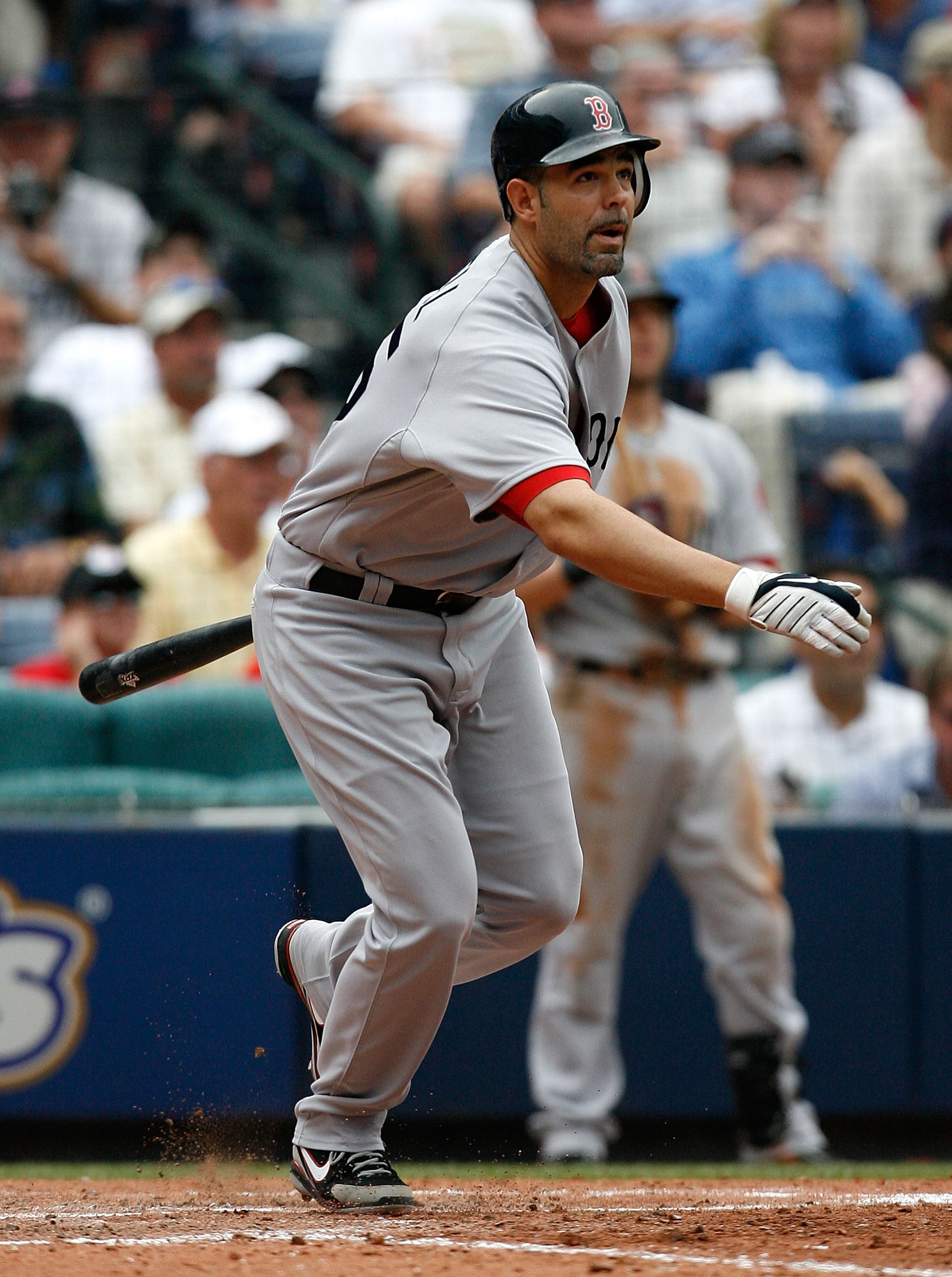 He hit 20 home runs and 47 doubles as his slugging percentage sky-rocketed to .475. He was also tied for the league lead in defensive fielding percentage with Gold Glover Eric Chavez.

He drove in a career high 120 runs and batted a career high .324 as he earned his fourth career All-Star selection and substantial MVP consideration. More importantly, he was named the World Series MVP as he helped the Red Sox win their second World Series in four years.

He was worth every penny the Red Sox paid him over those two years. But by 2007, Lowell was 33 years old and the Boston front office wasn't very optimistic about how much he had left in the tank.

They wanted to bring him back, but only at the right place.

Although Lowell reportedly received a four-year, $50 million offer from the Philadelphia Phillies, he decided to take less money and stay in Boston for three years and $37.5 million. 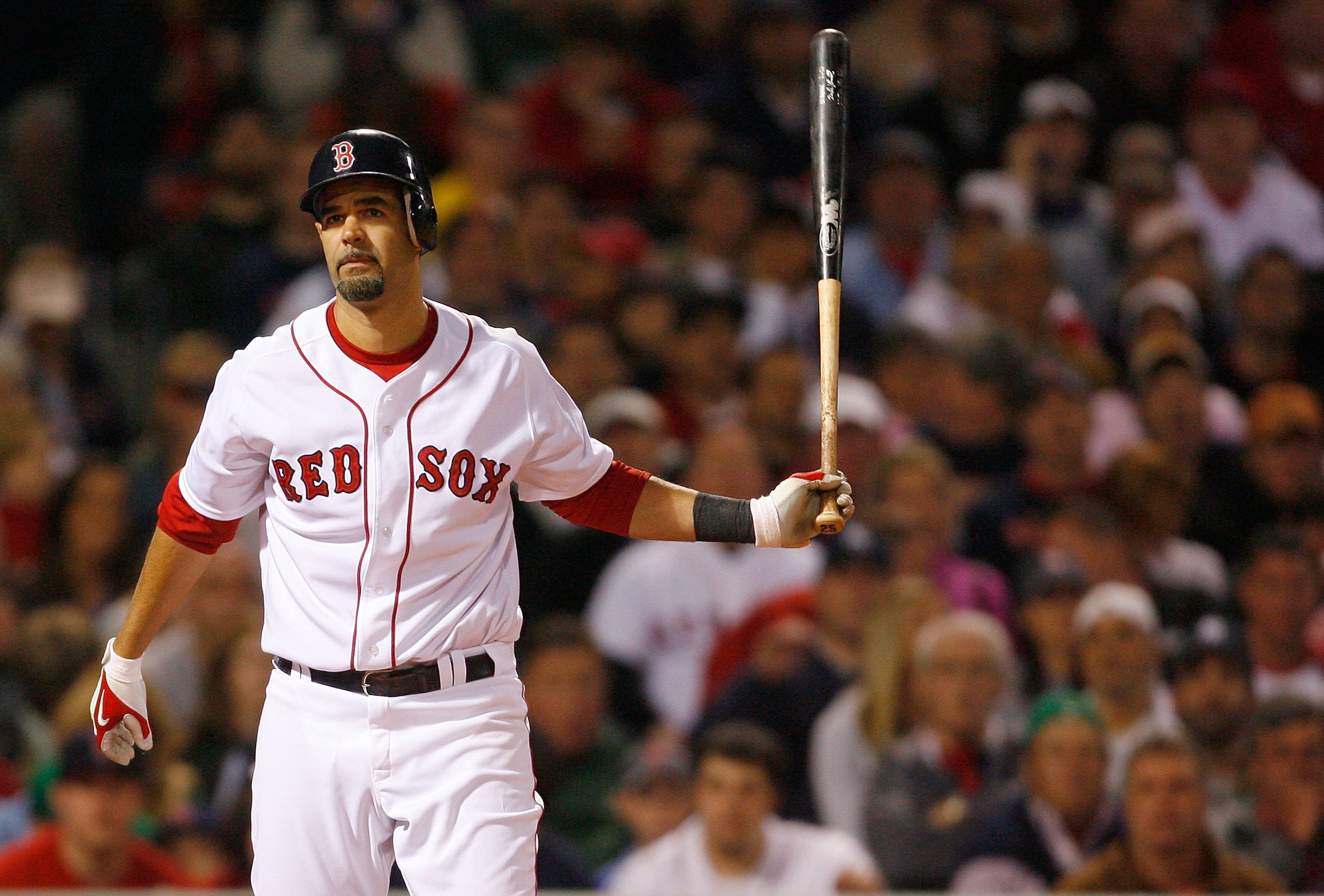 Lowell was still good in 2008. He hit 17 home runs and batted .274 with a .798 OPS. But he had lost a step or two defensively and missed several games with a bad hip, appearing in only 113 games for the season and missing the entirety of the playoffs.

He had surgery on the injured hip in the offseason, but his 2009 numbers were virtually the same (17 HRs, .290 BA, .811 OPS). Lowell also appeared in only 119 games, largely because the acquisition of Victor Martinez midseason made him into a part-time player.

He wasn't bad. But he certainly wasn't good enough to warrant being paid $12 million a year.

With Manny Ramirez gone and David Ortiz in rapid decline, the Red Sox needed a third baseman who could be a force in the lineup alongside Kevin Youkilis, Martinez, and Dustin Pedroia.

Lowell was clearly not that man. 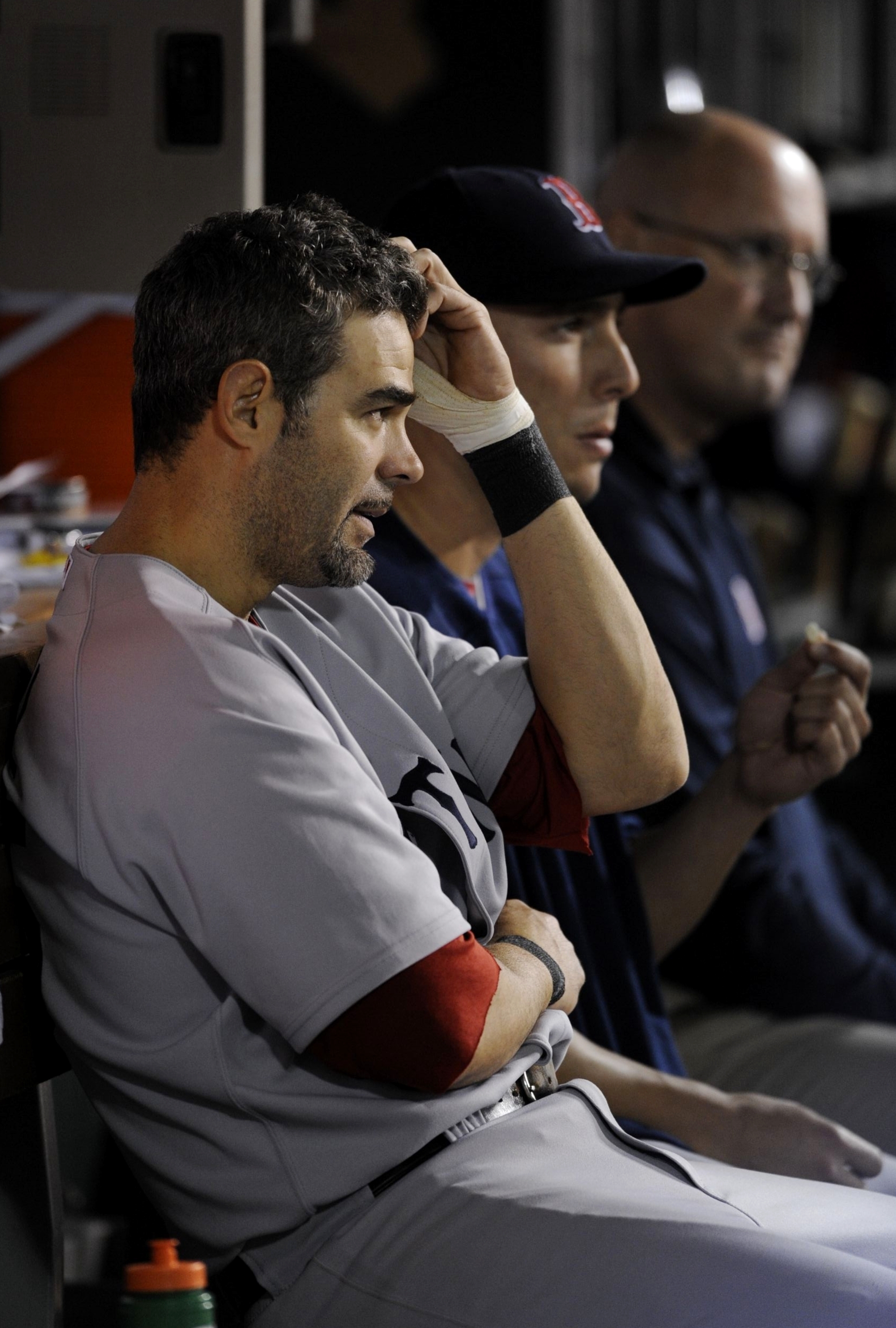 The Red Sox signed Adrian Beltre in the offseason to be their regular third baseman, meaning that there was no place for Lowell.

Boston tried to trade him and had agreed to a deal with the Texas Rangers for catcher Max Ramirez. But Lowell failed the physical when the Rangers discovered that his right thumb needed surgery, and so he was sent packing back to Boston.

But the Red Sox didn't want him, either. Playing Lowell would mean having to sit one of Beltre, Youkilis or Ortiz, neither of whom manager Terry Francona could risk taking out of the lineup.

So Lowell became the odd man out, sitting at the end of the bench quietly waiting to hear his name called, but knowing it would never come.

He recorded only 32 at-bats in April, 35 in May, and then 13 in June as Lowell was placed on the disabled list to open up a roster spot for another player.

There was speculation that it'd be the last time anyone would see Lowell in a Red Sox uniform. Would he be traded? Would he be released? Who would want a 36-year old utility infielder with bad knees? 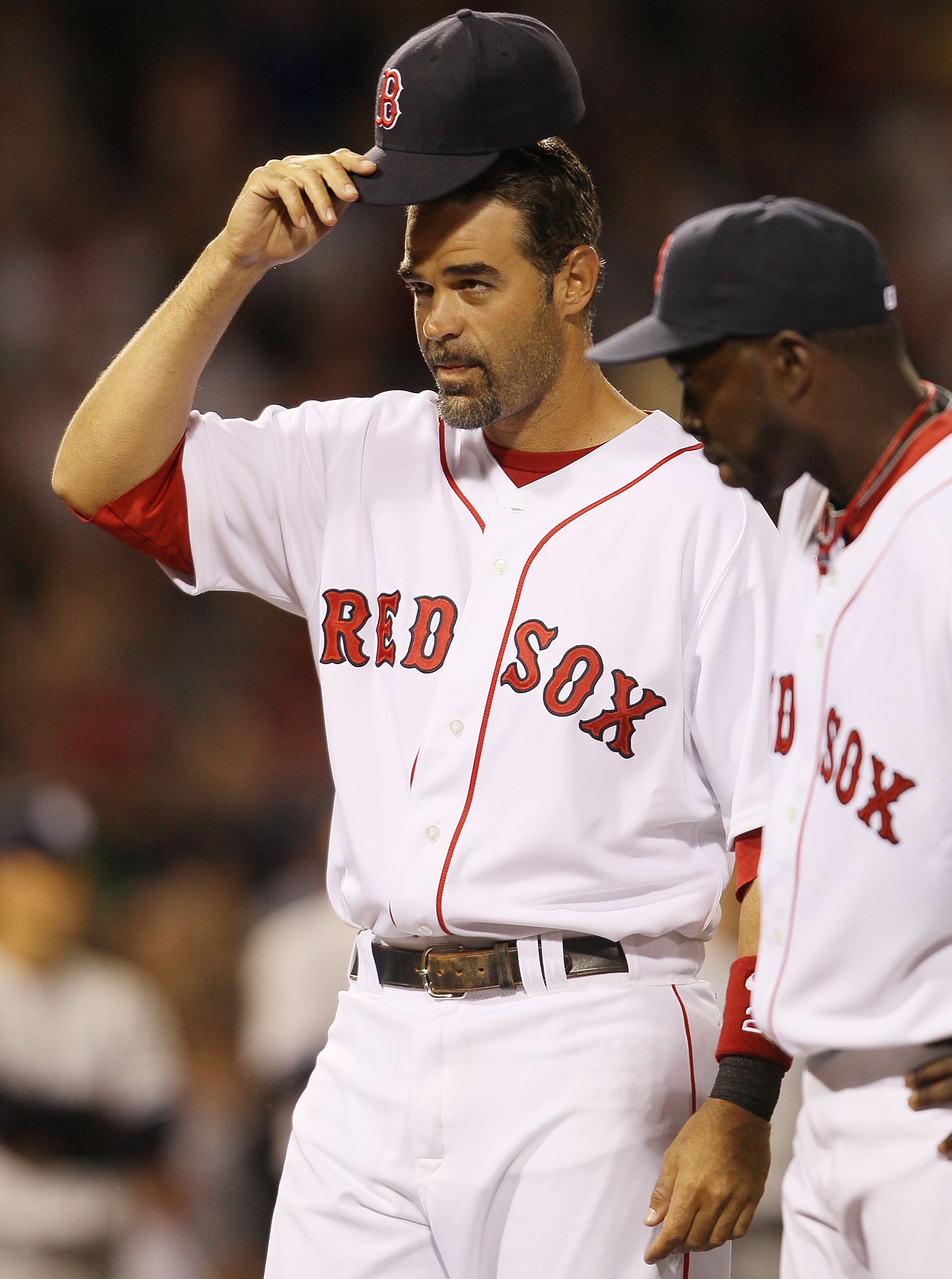 To everyone's surprise, however, the Red Sox weren't done with Lowell yet. Ravaged by injuries, Boston called on Lowell to replace Youkilis as the first baseman.

Lowell made his return to the Boston lineup on Aug. 3 to a standing ovation from the Fenway faithful. He smashed the first pitch he saw for a two-run home run. The Red Sox won 3-1.

Lowell became a regular again, totaling 82 at-bats in August. He didn't have his power anymore or the lateral quickness to field third base, but he could play a competent first base.

Unfortunately for Boston and for Lowell, it didn't matter. The team was in too deep of a hole to reclaim a playoff spot and was officially eliminated last week.

But what Lowell couldn't do at the plate or on the field, he made up for in the clubhouse.

On a team stuffed with rookies thrust into action, Lowell served as the guiding veteran. It is a role he's performed admirably most of his career.

When it would've been easy to complain or demand a trade, Lowell was silent. He waited his turn and now in the twilight of his career, he finally gets the opportunity to contribute to the team. 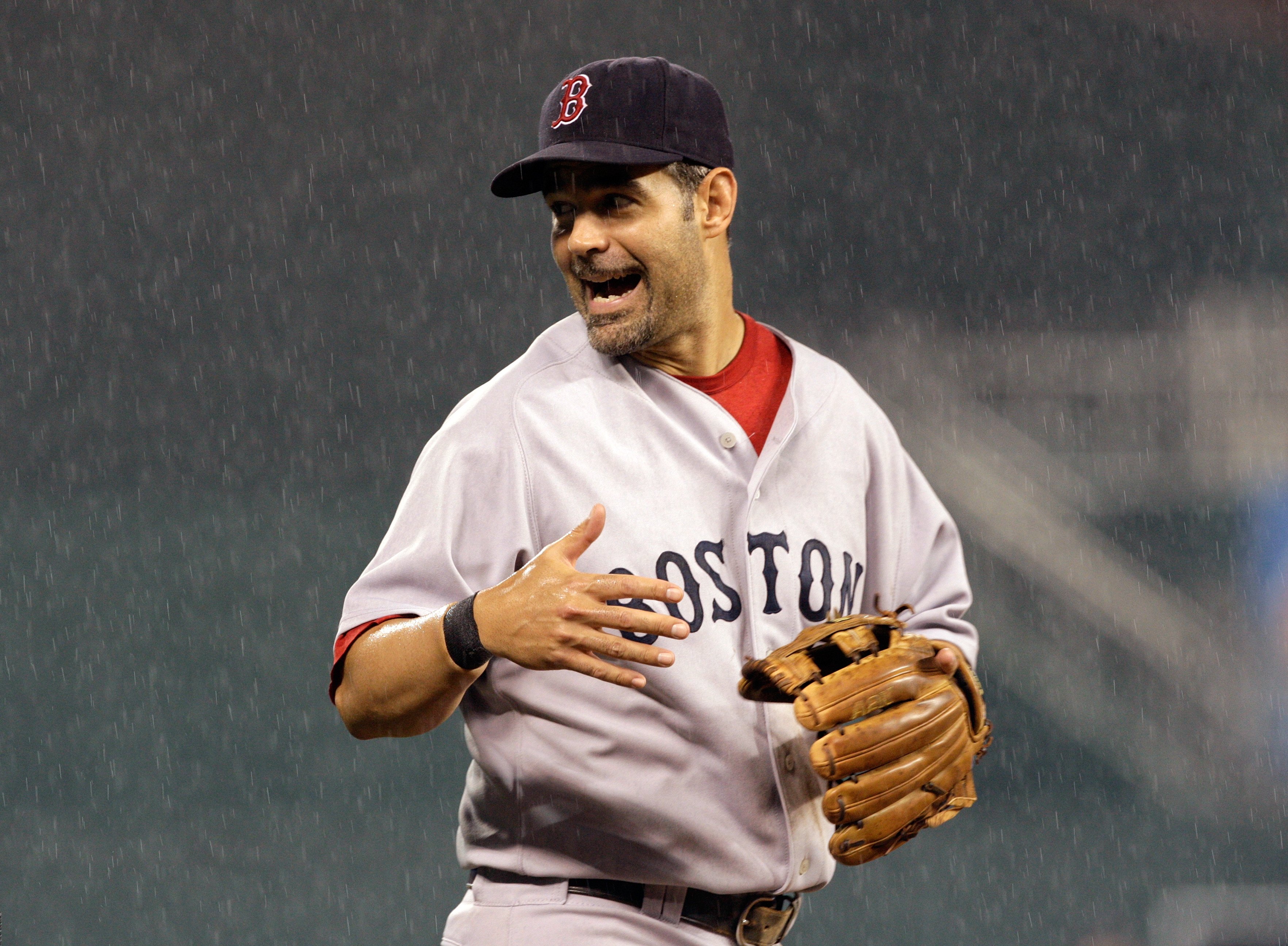 Lowell will never make the Hall of Fame. But that doesn't mean he wasn't great. Here's a quick look back at his career accomplishments.

Tonight, we witness the beginning of the end. Lowell will finish his career playing against the same team that he made his major league debut with. Here's hoping he can finish it the same way he started it—with a hit.