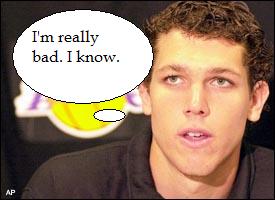 The Los Angeles Lakers are known as one of the most successful franchises in NBA history. They are one more championship away from tying the Boston Celtics for the most NBA Championships. The Los Angeles Lakers have boasted superstars such as Jerry West (he's the NBA logo for crying out loud!), Wilt Chamberlain, Elgin Baylor, Magic Johnson, Kareem Abdul-Jabbar, James Worthy, Shaquille O'Neal, and Kobe Bryant. Pretty impressive, huh?

However, the Los Angeles Lakers, despite being the greatest NBA franchise of all time, have had their fair share of bad players on their team. Now let's take a look at the top 10 all-time worst L.A. Lakers. 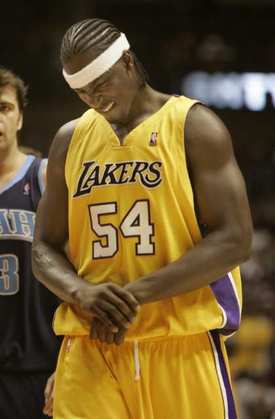 Yes, I believe that Kwame Brown is the 10th worst Laker ever because he actually wasn't all that bad. I kind of like how he played defense. He was able to disrupt players like Yao Ming, KG, and Tim Duncan during the "post-Shaq era." However, his offense was probably the worst I have ever seen. Brown missed wide open dunks, tip-in dunks, just plain regular tip-ins, and even alley-oops!

I respected his defense, but this guy plain out annoyed (and even angered) me when he had the ball. 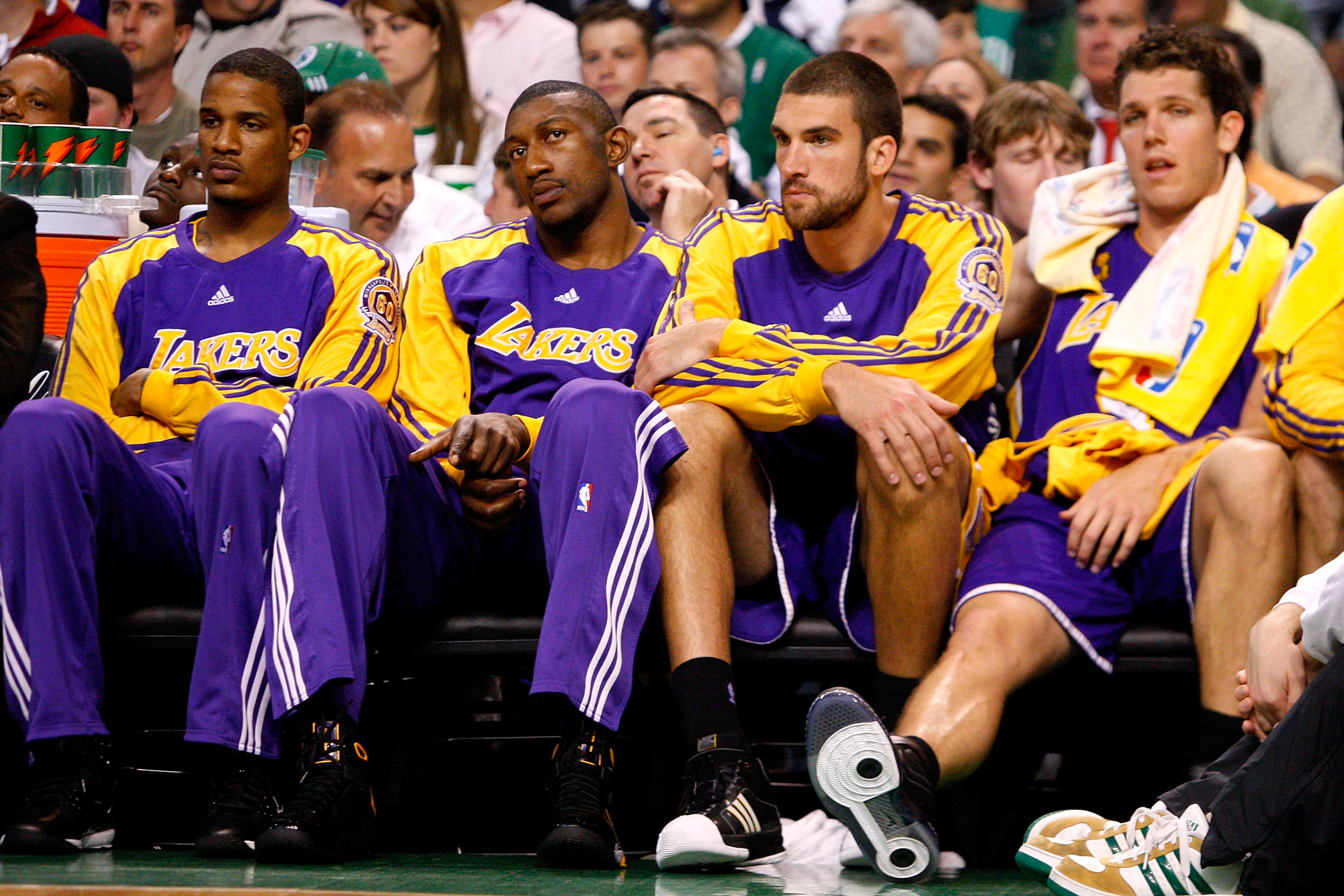 I have a friend named John who is just as big a Laker fan as I am. For some reason he thinks Chris Mihm is a good player. I remembered seeing him having a couple of good games, but whenever he starts getting his rhythm, he gets injured out of nowhere. Chris Mihm wasn't so bad, but I put him on this list because he got my hopes up and then shattered them the second he drops on the floor with a grimace on his face. 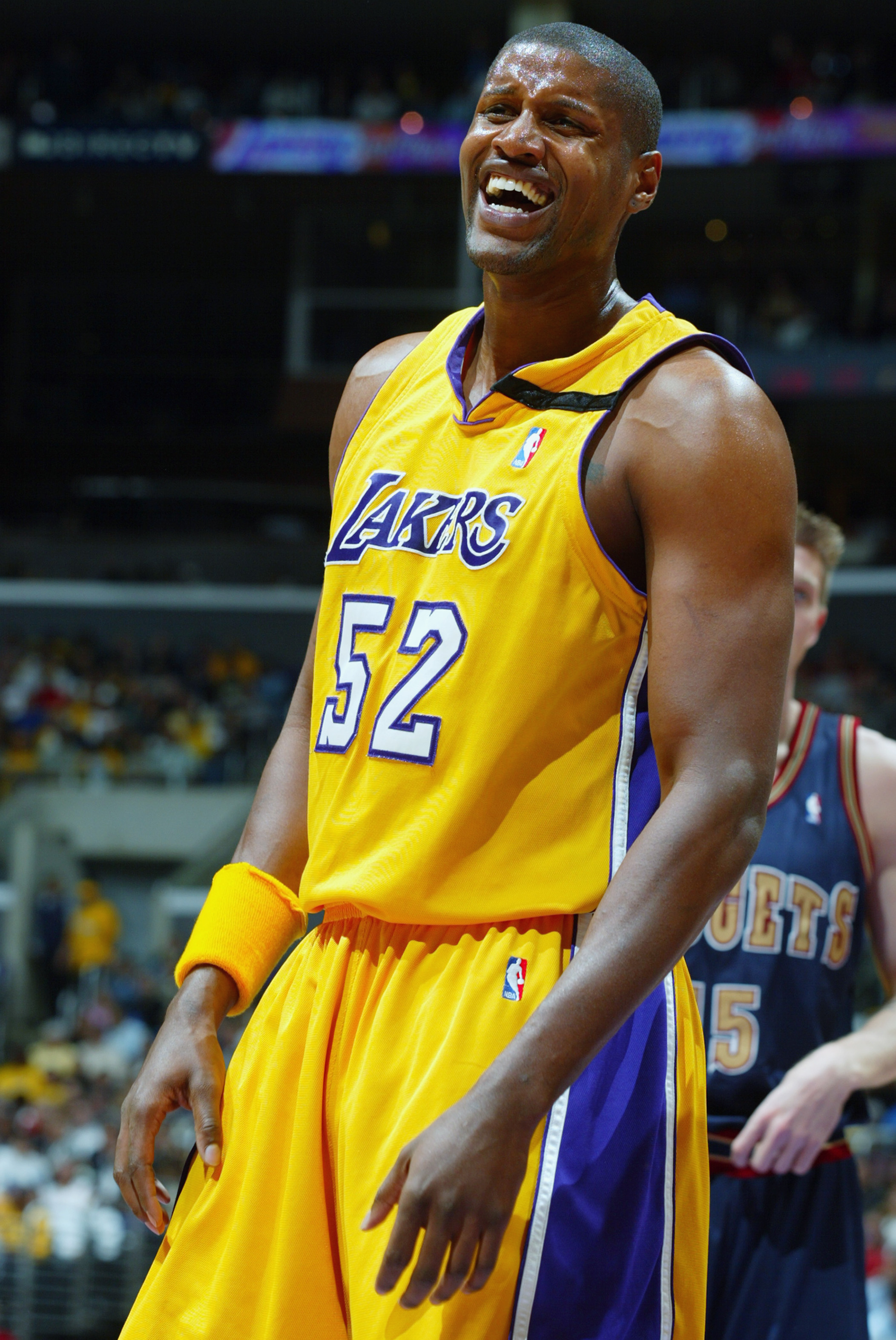 Samaki Walker was a starter for the Lakers during the 2001-02 championship season. He averaged 6.7 points and 7.0 rebounds per game that season. That's not so bad considering that he's on a team with Shaq (who was a good rebounder and scorer) and Kobe (who was also a good scorer).

However, Walker was so inconsistent that Laker fans just did not care about what he did and eventually gave up on him. One game he'd give L.A. solid stats, but the next he would just cheerlead. I have never seen such an inconsistent player until I saw the next guy. 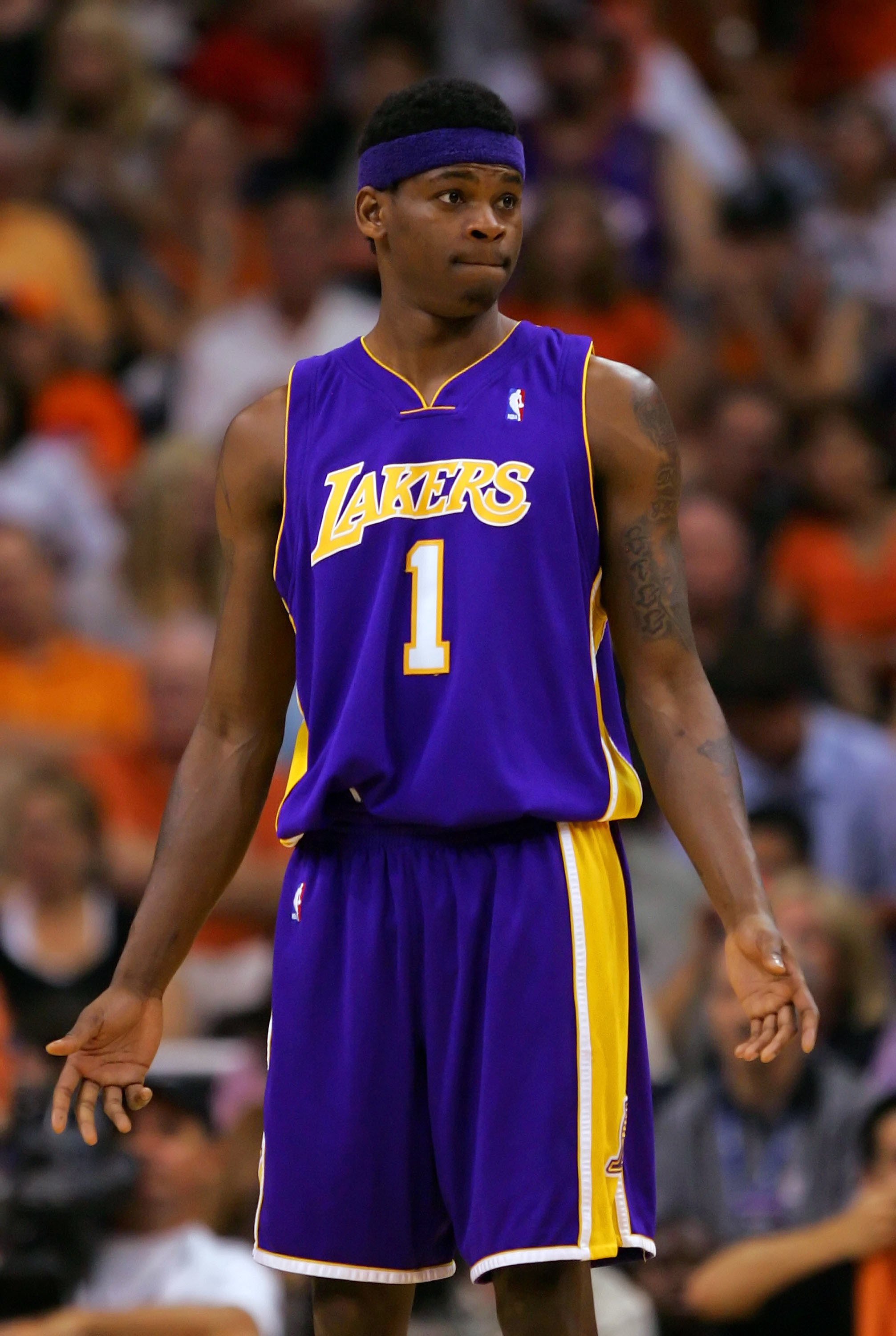 Yup, Smush Parker was the most inconsistent player of all time. One game he'll give you 20 points, another game he'll give you five points. This guy was stubborn and could not shoot. Even Phil Jackson (who was able to tame Dennis Rodman and Ron Artest) gave up on this guy. He was the reason why the Lakers lost Game 7 of the 2006 first round playoffs against the Phoenix Suns. Despite all his shortcomings, he still had the nerve to blame Kobe for his mishaps. You can see the video on YouTube. 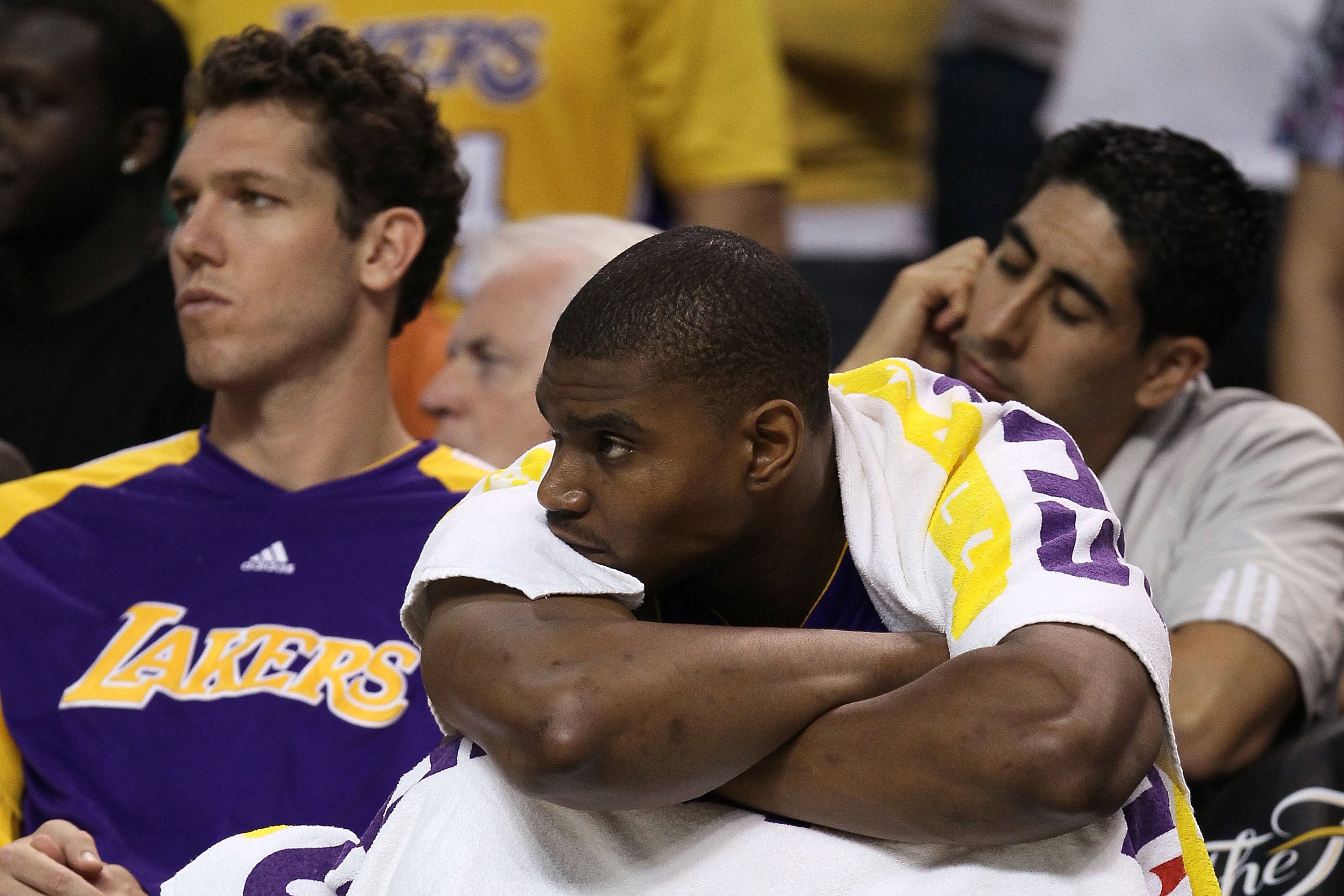 I remember hoping this guy would be considered to be the Most Improved Player of the year in 2007. Then he got injured. I really had high expectations but he just had bad luck. Like his father, Luke was injury riddled and is a prime example that white people can't jump. I have never seen this guy make a dunk before. People can say whatever they want about him being a "smart" player; all he is to me is another player the Lakers waste their money on. 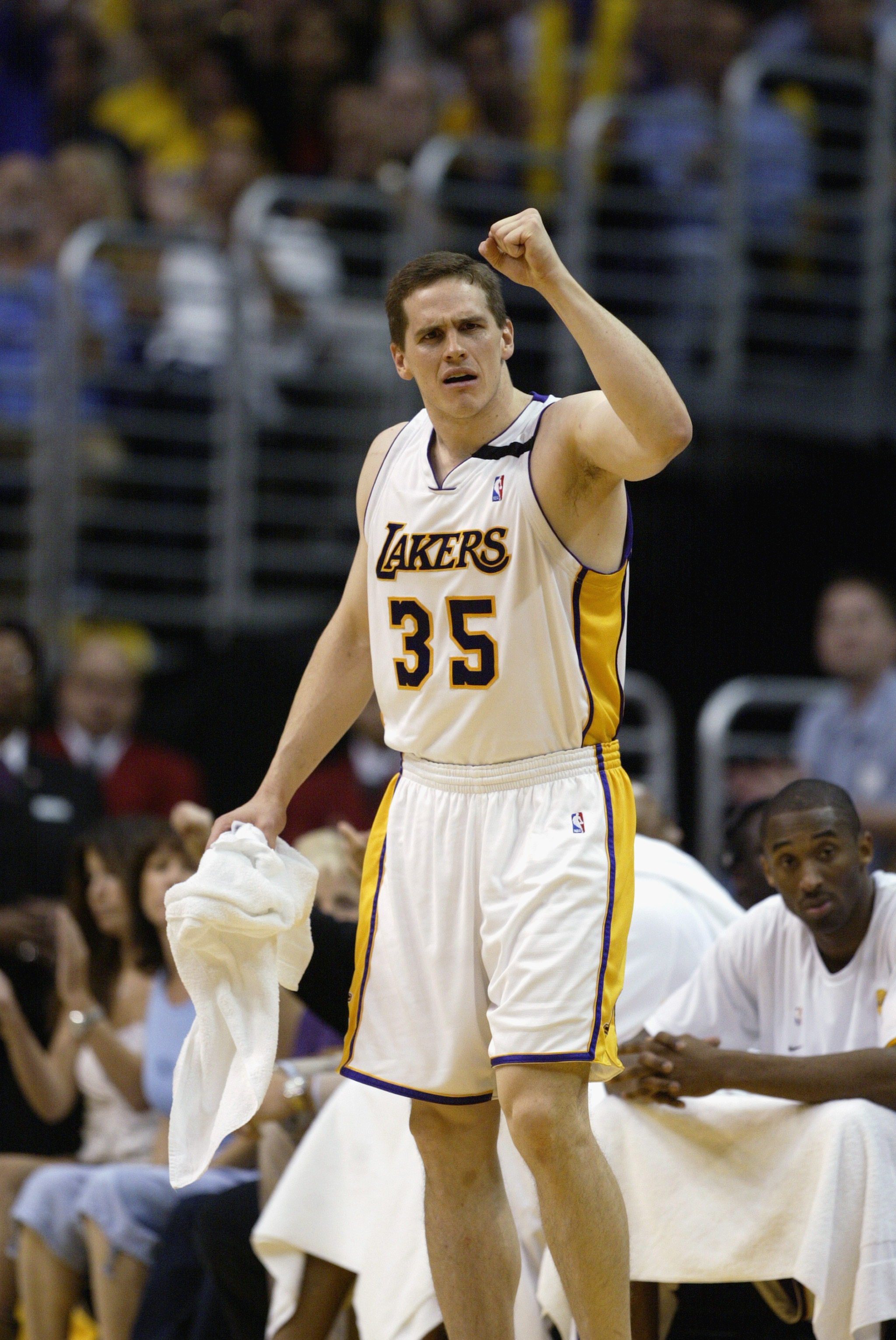 All he's known for is for dancing while Shaq was rapping. Enough said. 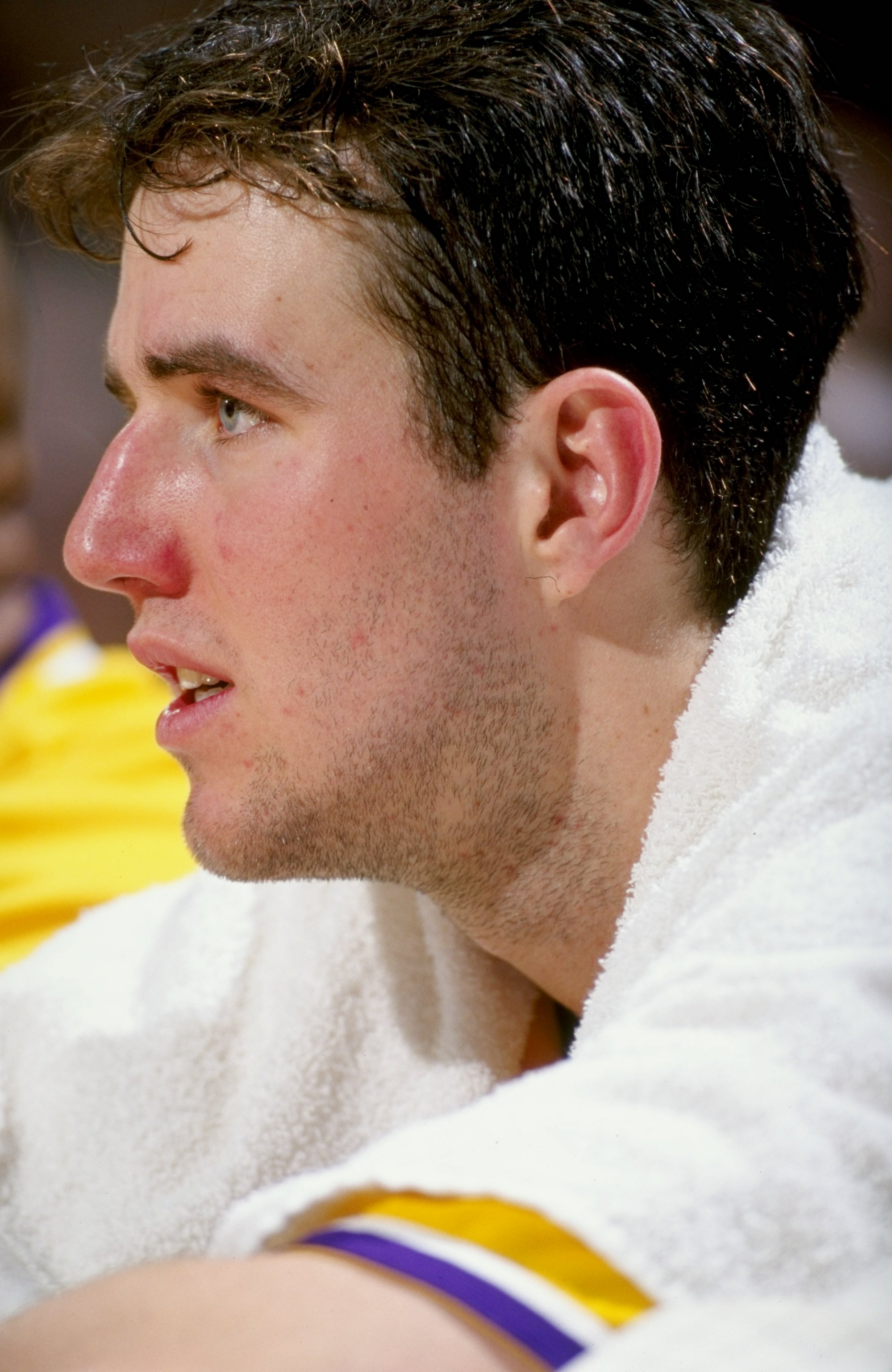 This guy was tall. Apparently that's all he was because he never developed into anything. The sad thing was is that the Lakers thought he was the future of the Lakers just because he was in the NBA All-Rookie Second Team with Kobe Bryant. Unlike Kobe, we don't see him winning Championships, Finals MVP Awards, being an All-Star, or having world wide commercials. 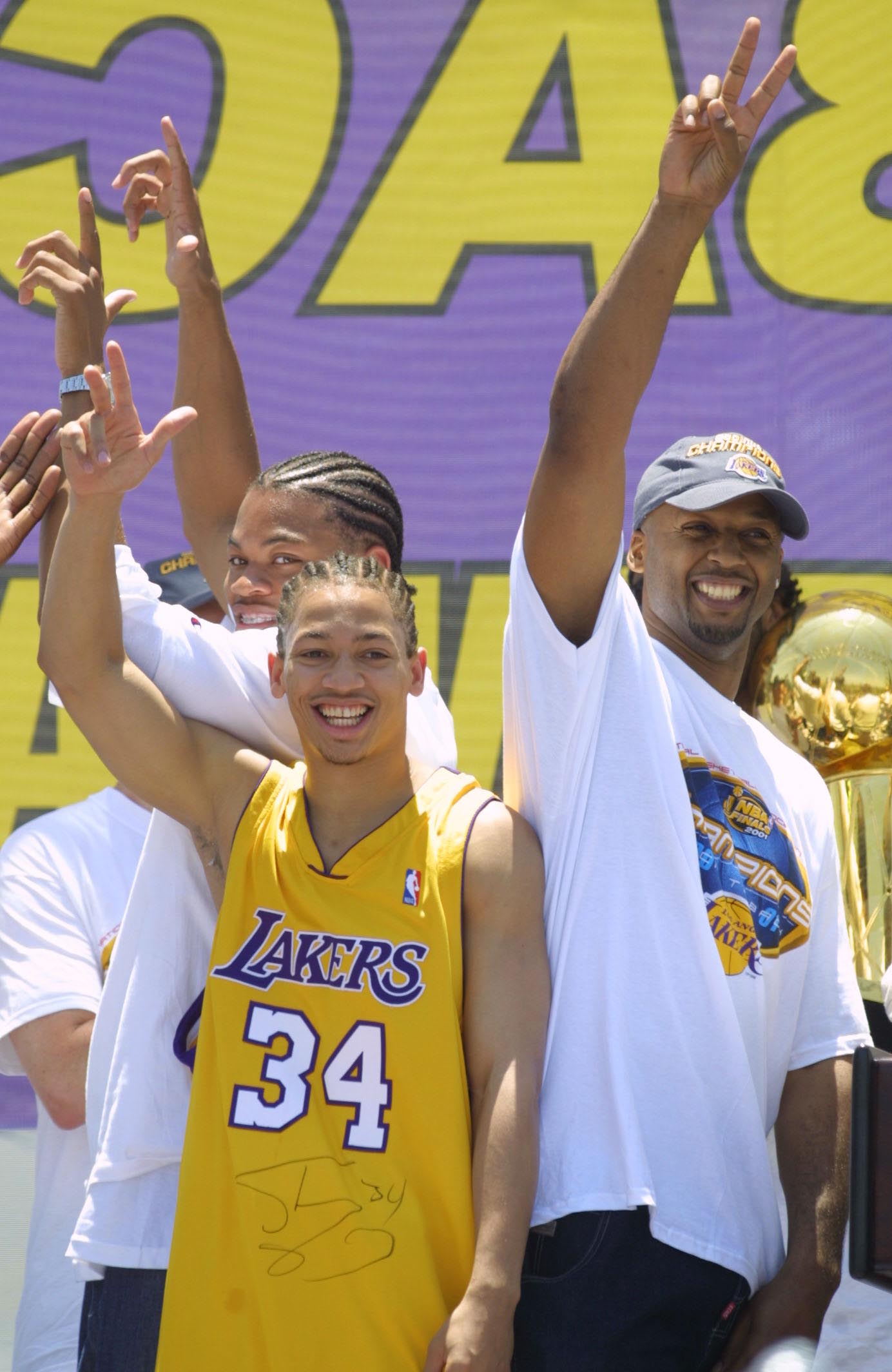 This guy got crossed-over by Allen Iverson like he was his b**ch. That's the only memory I got of him when he was a Laker. I would Google more embarassing stuff about him, but he's not worth my time. 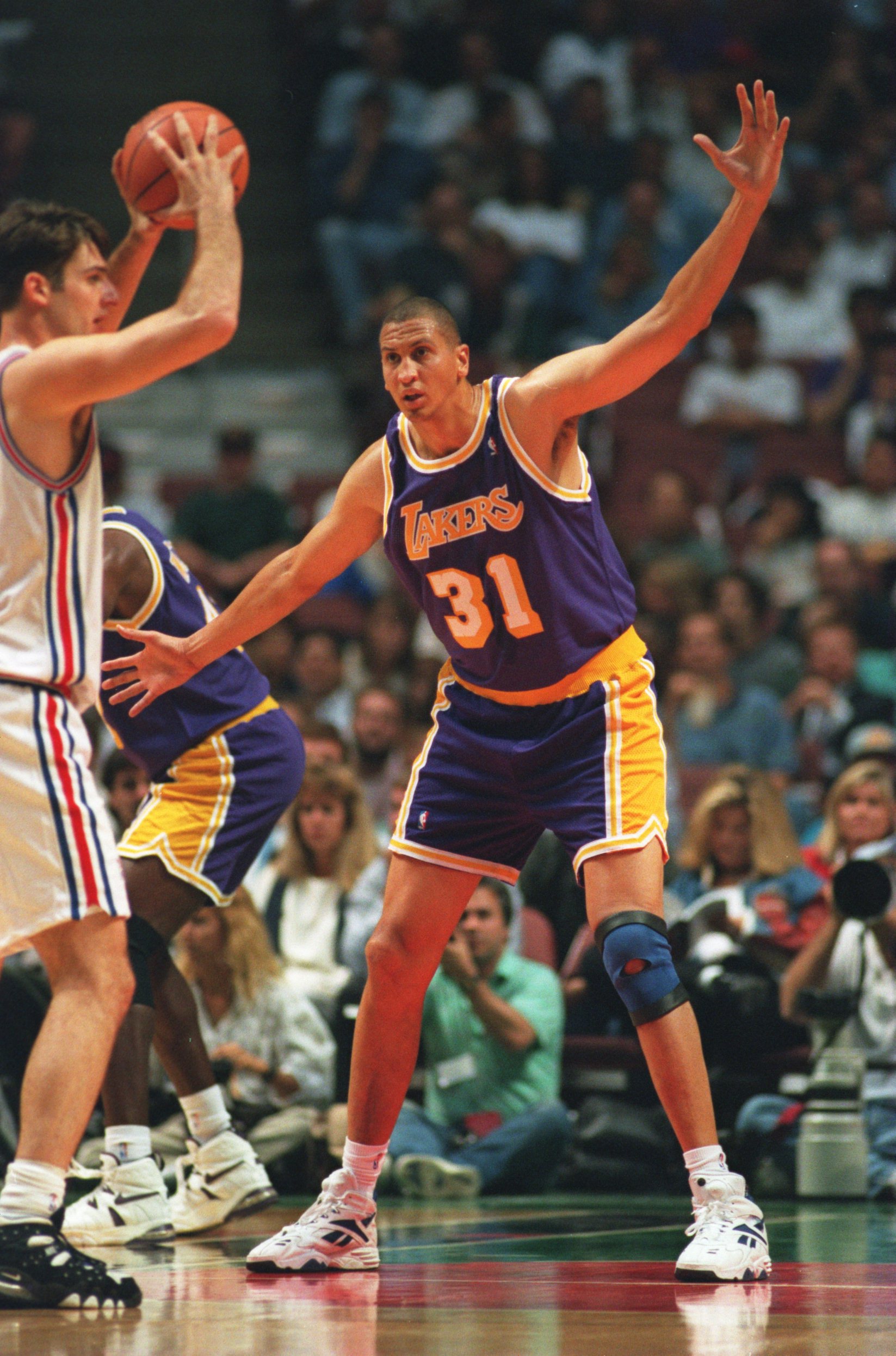 The biggest draft bust in NBA history. The only accomplishment this guy ever had was being drafted ahead of Michael Jordan, the greatest basketball player of all time. These facts wouldn't have mattered if he had actually contributed for the Lakers; unfortunately, he did less for the Lakers than he did with the Portland Trail Blazers. At least he gave them hope; he gave us his useless body. 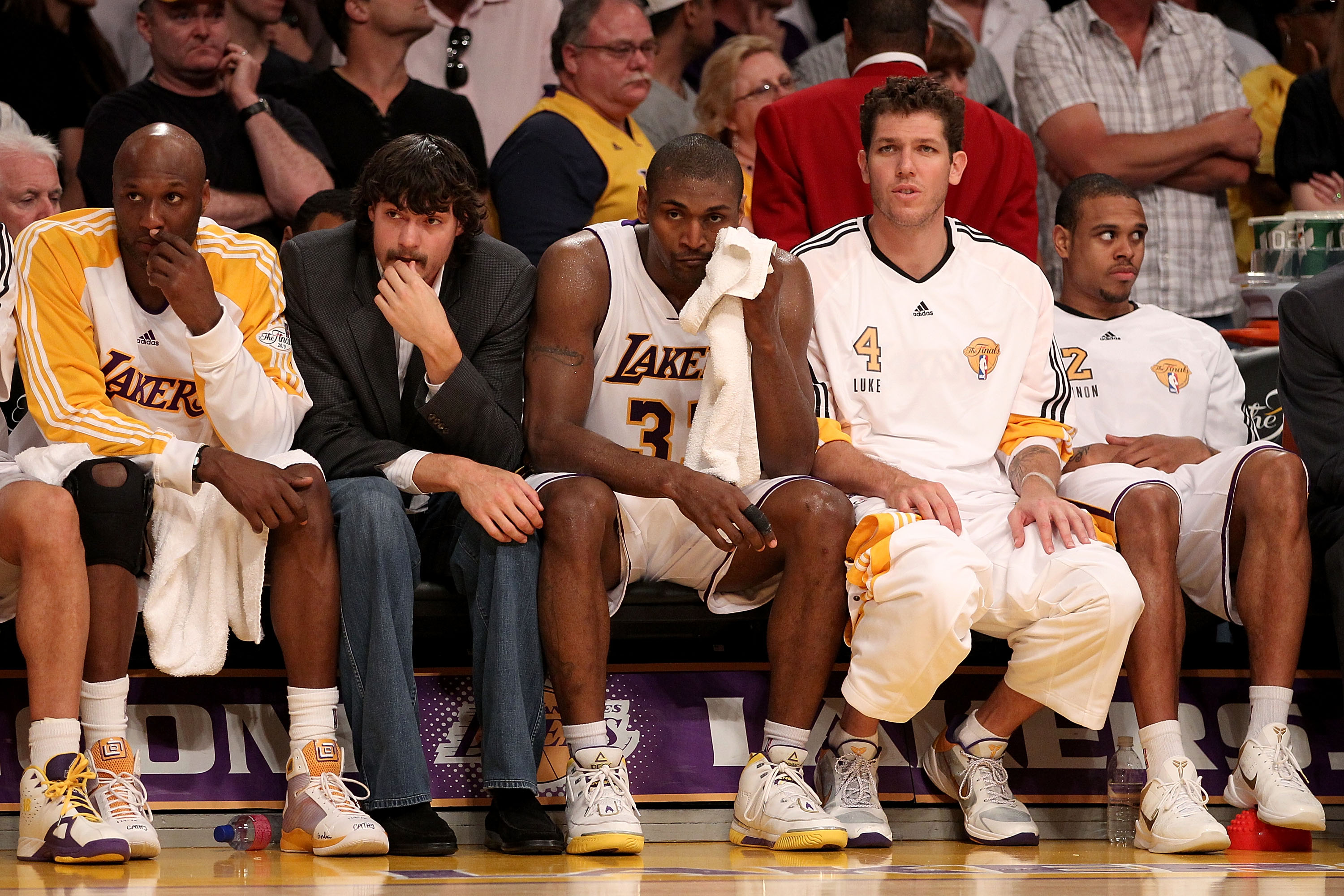 Adam Morrison is the one and only person that I envy on the Lakers. The only reason why I don't want to be Kobe or Gasol is because I definitely can't replace them. Adam Morrison on the other hand gets to travel with the Lakers, watch all their games, talk with the likes of Kobe, be ugly, and yet still get girls because he's on the Lakers roster.

This guy has got to be the luckiest guy on the planet. However, his output for the Lakers is nonexistent. All this guy does is clap his hands as the Lakers' only male cheerleader, which is why I put him as the worst Laker of all time. 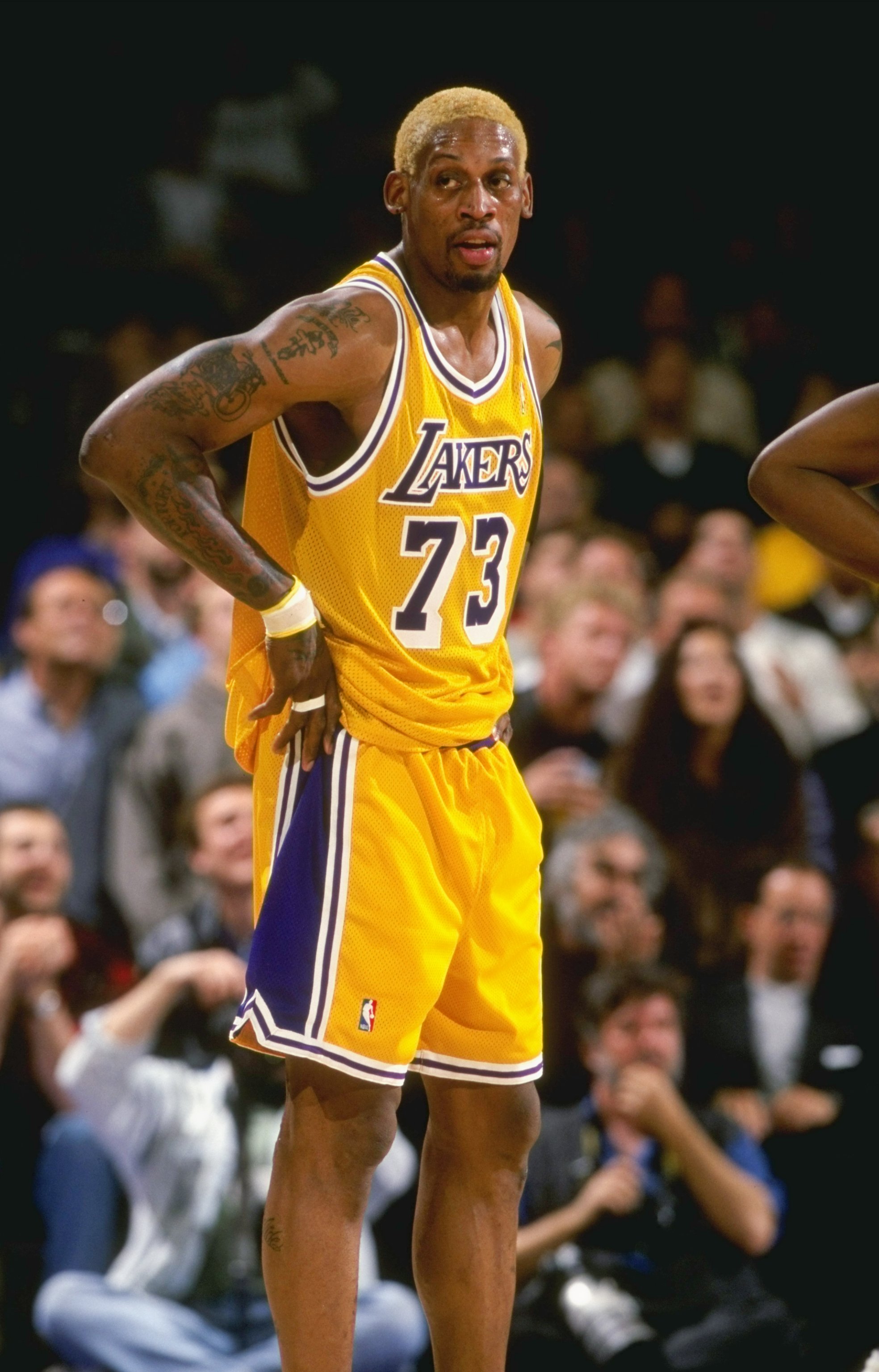 This guy only played 23 games for the Lakers. He got ejected from pretty much all of them. This guy could have teamed up with Shaq to be the most feared Twin Towers in league history. However, he did not live up to the hype around him. The only reason why he's not on the list is because he at least averaged over 11 rebounds per game.

This guy was not that bad. He was not a bad shooter and he did have some game, but this guy just didn't care or work hard enough. Not to mention he was a bit of a ball hogger.

Rider didn't make this list because he at least averaged about eight points per game for the Lakers. However, his attitude pissed pretty much everyone off. Phil Jackson got so sick and tired of it he benched him during the entire playoffs. At least he won a ring.

Being Asian myself, I hate making Sun Yue as an honorable mention. I remembered him playing during an exhibition game. He got a rebound but then missed a wide open layup. That's the last I saw of him. However, since he didn't play that much, he didn't cause any damage to the Lakers their championship season. Like Rider, at least he won a championship.