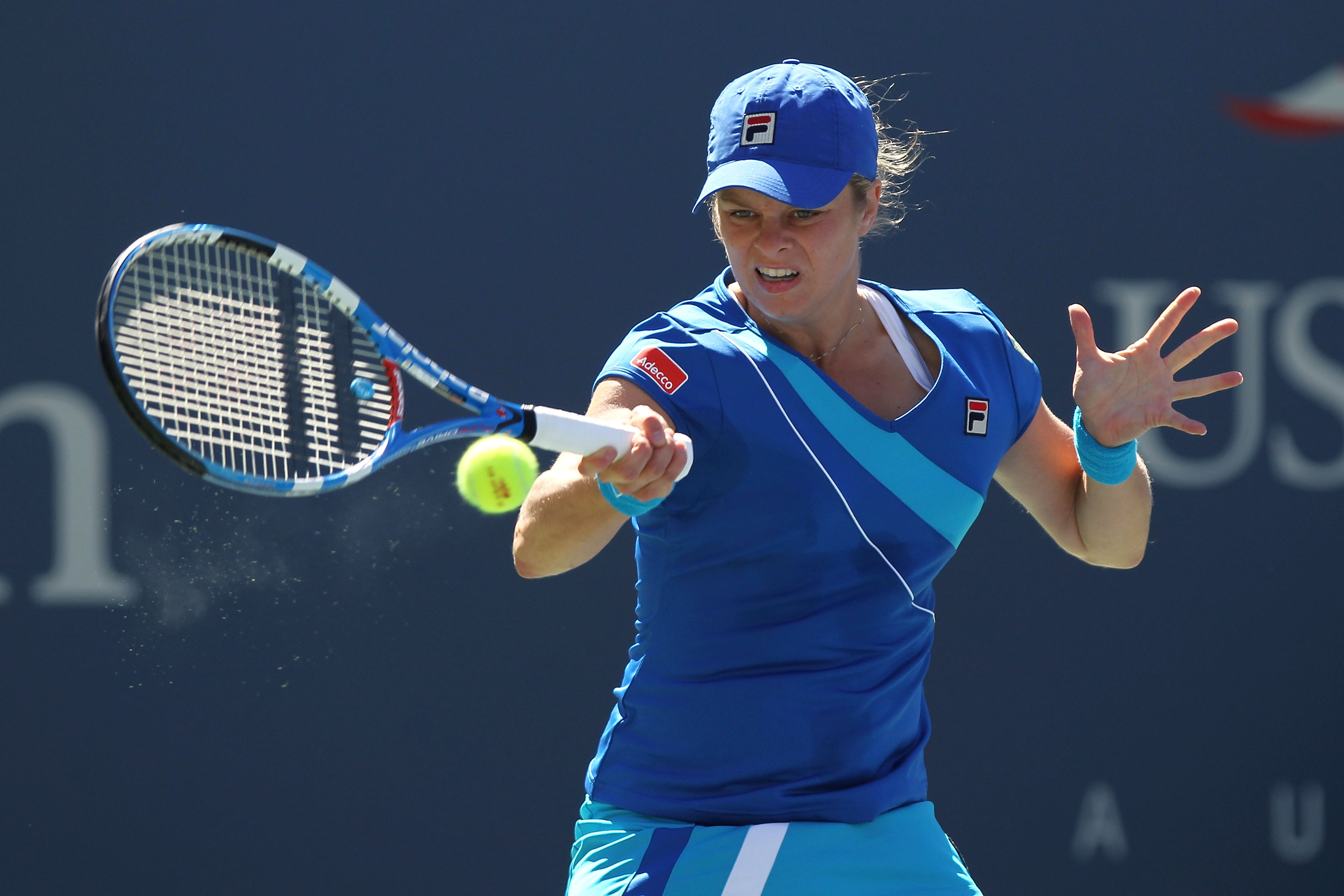 The list of players in both the men's and women's draws is thinning rapidly, with the most intriguing matchups ahead. As the men's side plays half of its fourth-round matches and women start their quarterfinals, Tuesday features both the top male player and the women's defending champion in action.

Among those and the many other singles and doubles matches on tap, the most intriguing storylines are: 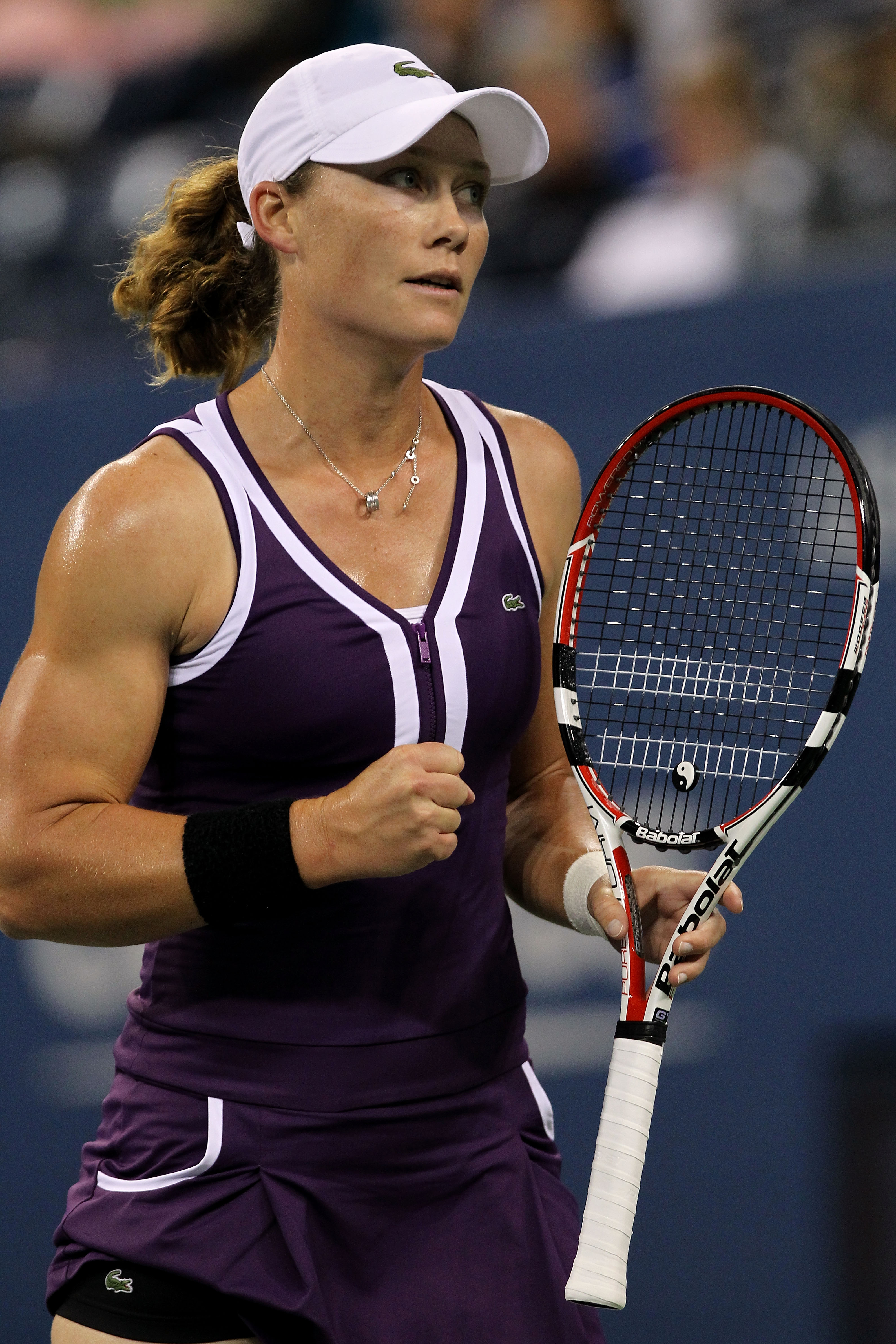 The quarterfinal encounter between defending champion Kim Clijsters and Roland Garros runner-up Samantha Stosur tops Tuesday’s action. After a season in which the smiling Belgian had little Grand Slam success to back up her improbably Open run of last year, she has been incendiary in the first four rounds. Opening with a bagel and then a 7-5 victory of Greta Arn, Clijsters has since lost three games apiece in her subsequent three matches.

Against a supposedly resurgent Ana Ivanovic in round four, Clijsters broke six serve of seven times.

The Australian Stosur ought to present more of a challenge for the defending champ, though, as her muscular forehand and kick serve carried her to a career high ranking of No. 5 this year and the finals in Paris. She’s also been tested in a way Clijsters hasn’t, prevailing over Elena Dementieva in a third-set tiebreak in the fourth round.

Clijsters’ speed and defensive skills will likely make the difference in this encounter, though, and her pursuit of a third Open crown continue into the semis. 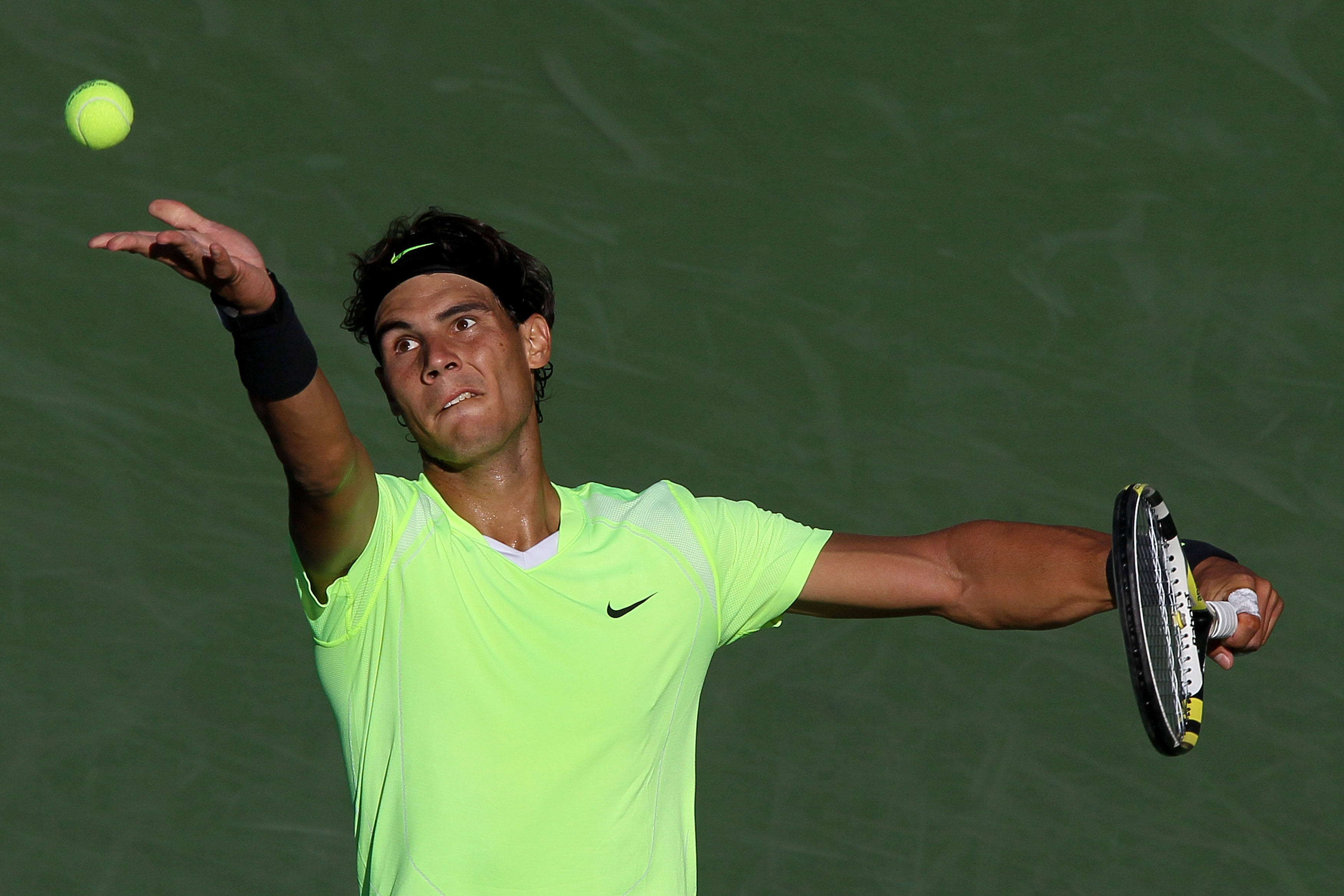 Short of actually winning the Open, Sunday was as good a day as Rafael Nadal could have had at the US Open. The greatest obstacle to his run to the final, Andy Murray, fell to Stanislas Wawrinka, and dangerous floater David Nalbandian – who has beaten Nadal twice – fell to fellow Spaniard Fernando Verdasco, who has never beaten Nadal in 10 meetings.

What’s more, after two relatively tight three-setters, Nadal won a comfortable victory over Gilles Simon, who a) lacks the weaponry to really hurt the Spaniard from the backcourt and b) was distracted by the recent birth of his son.

Now Nadal is into round 4, having not lost a set or a game of serve in three matches. His quarter is now filled with Spaniards, all of whom have overwhelmingly poor records against him. Of them, though, the most unique challenge is probably his next opponent, Feliciano Lopez.

Lopez resides in Madrid and can play on the clay, but he’s no grinder. In June he put on an exhibition of attacking tennis at Queens Club, keeping the top Spaniard off-balance through a combination of hard serving, sliced backhands and well-timed net forays. On the speedy New York courts, this game plan may cause headaches for Nadal.

But unlike at Queens, the world No. 1 isn’t playing just his third match of the season on this surface, and appears to be gaining in confidence. While his serve will never be the biggest on tour, his success in the first three rounds shows how underrated his hold game is. 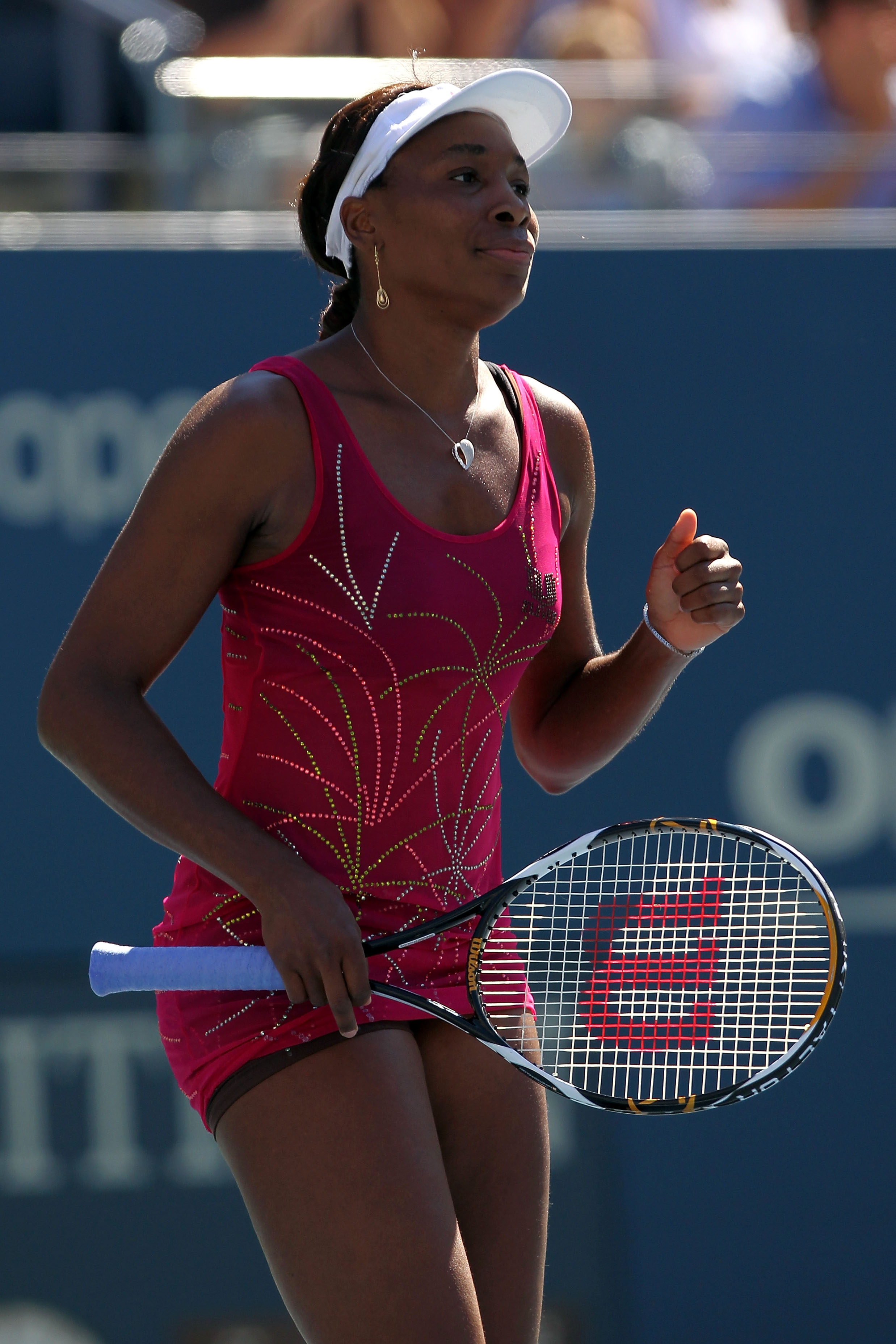 Venus Williams has gotten more attention thus far for her dresses and the “tug count” she racked up against Shahar Pe’er in round four. With her not so little sister Serena unable to play this year’s event, however, she entered this event as the host nation’s best chance to lift the trophy. That, and the fact that she’s the last American woman playing, will probably be on the minds of the New York crowd.

Trouble is, she hasn’t won this event in nine (!) years and she’s in what certainly appears to be the tougher side of the bracket. A potential meeting with Clijsters in the semis looms, but first she must get past the Italian Schiavone.

This year at Roland Garros Francesca Schiavone proved that one-slam wonder status is not always a disappointment: In fact, if you’re an 11-year tour veteran with a nice-looking game who catches fire and has the draw open up for you, it looks downright providential.

Schiavone can enter this match as she did the Paris final: swinging freely, knowing that she’s accomplished more than anyone expected of her. Against the elder Williams on a hard court, though, that probably won’t be enough, and the lone American will probably extend her record against Schiavone to 8-0. 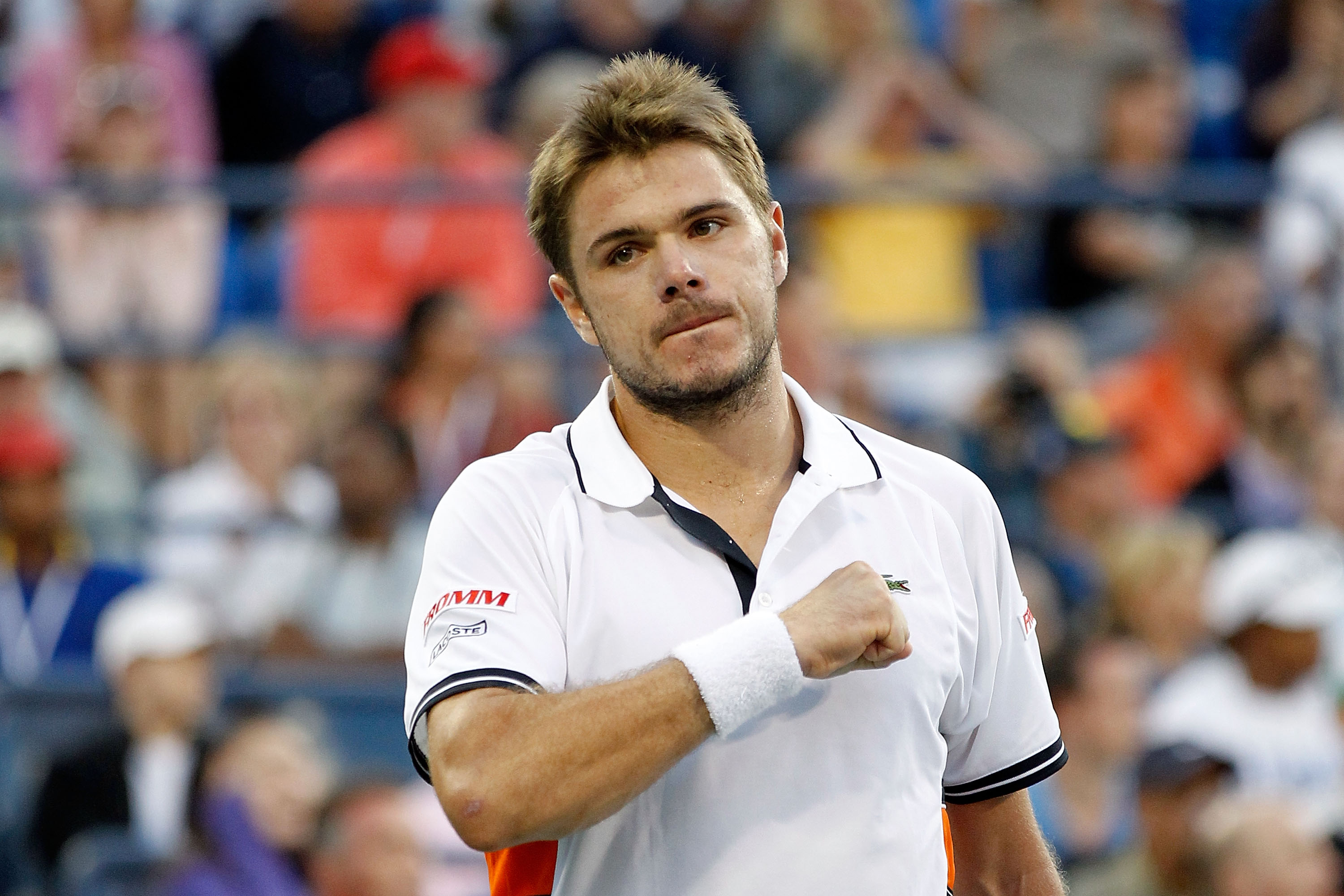 The second-best Swiss in tennis created the biggest shock of the tournament so far when he ousted Andy Murray in round three. In doing so, he paved the way for at least one surprise semifinalist, a slot he’ll be looking to fill himself.

Standing in his way will be the tallest entrant left in the field in Sam Querrey. Age 22 until next month, the 6’6” Querrey wields one of the biggest serves in tennis and has won four of his six career titles in ’10.

Wawrinka has won one title this year on the clay of Casablanca, but his win over Murray would have to be his highlight of 2010 thus far. Though lacking the silent swiftness of compatriot Roger Federer, Wawrinka’s one-handed backhand may be even deadlier, while his serve is pretty big in its own right.

There’s been only one prior meeting between these two, at last year’s Indian Wells, won by Wawrinka 7-6 in the third. That has less bearing on this match than how the two players have fared in recent matches, though, and in a best of five match I have trouble seeing Querrey beating Wawrinka from the backcourt.

Though it hurts the heart to see no Americans moving beyond the round of 16, the head says that Wawrinka prevails in four. 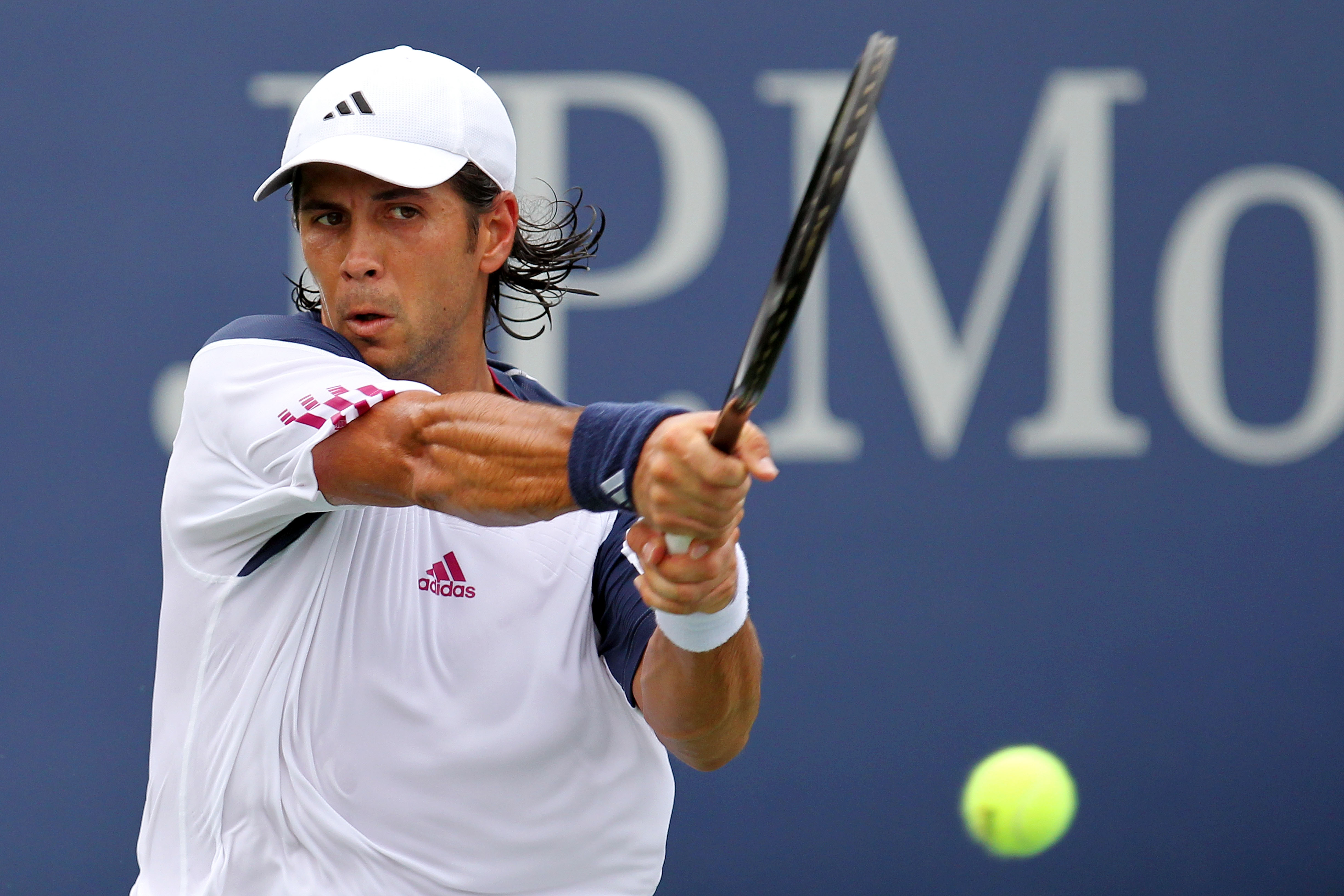 They’re both Davis Cup stalwarts, both reached finals of clay court Master’s Series events this summer, and along with Nadal/Lopez they’re helping guarantee one Spanish semifinalist.

Otherwise, there are pretty big differences in their games. Even in a game full of massive forehand-serve combinations, Verdasco’s left-handed delivery stands out. Ferrer is the shortest guy in the top 20, but his flat shots and speed make him hard to overlook.

This week Ferrer has had a much easier route than Verdasco, having not dropped a set thus far. Verdasco has had to work harder, winning in five against Fabio Fognini in round one, then eliminating the most dangerous of floaters in David Nalbandian, taking the Argentine down in four sets in the prior round.

While Ferrer may lack Nalbandian’s brilliance, Verdasco’s going to find the fitter Ferrer much harder to outlast. Still, for him to have opened with a 6-2 first and finished with a 6-2 fourth set indicates that his forehand is translating well to the speed of the court.

This one’s a pick ‘em. And either way, the winner of this match earns a (probable) date with Nadal, against whom neither Ferrer (3-11) nor Verdasco (0-10) has a good track record. 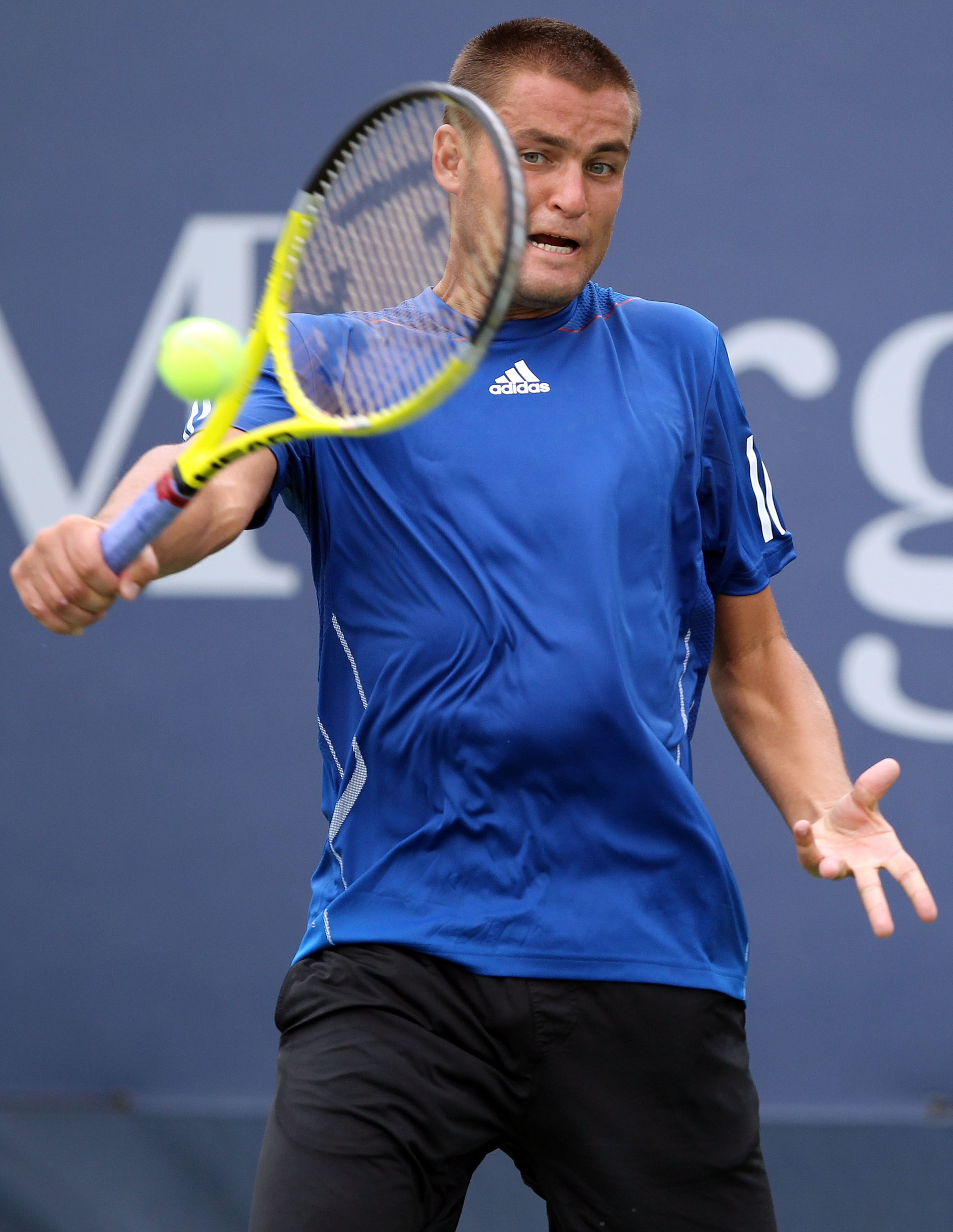 This contest pits two of the tour's most experienced players with two of the finest one-handed backhands against one another. Aside from those two areas, though, the two have very little in common.

Youzhny is the flashier of the two, with flatter shots and a more aggressive style of play, while Robredo is the consummate pro, opportunistically capitalizing on players suffering from letdowns after big wins.

That could potentially apply to Youzhny, who beat John Isner in a night match on Sunday, but it's doubtful. Youzhny should have too much game to fall on this surface. While Robredo has won two of their three career meetings, Youzhny dominated their last encounter at the Open in 2006.

That’s right, four years ago; these two have been around awhile.

Death, Taxes, and The Bryan Brothers 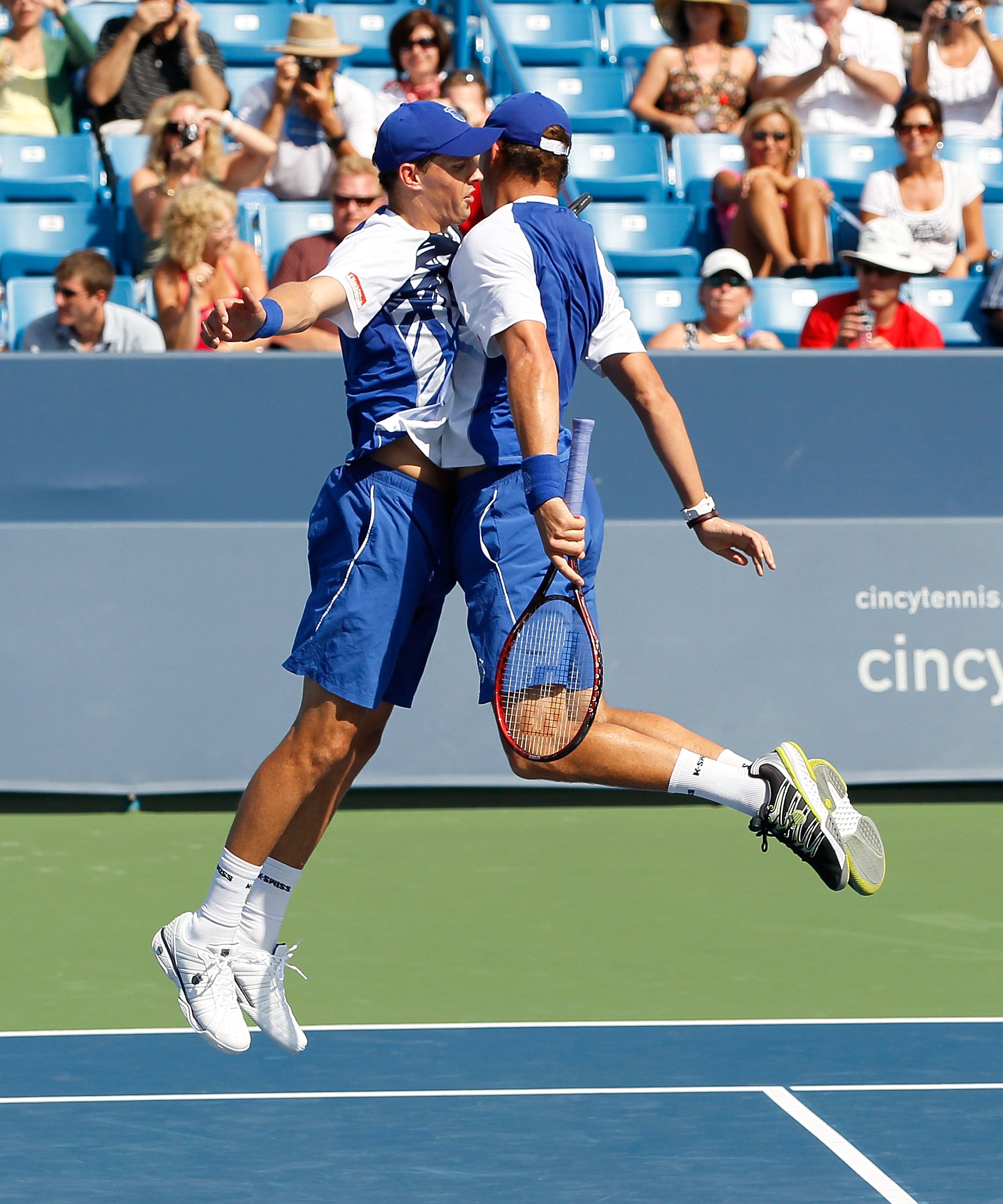 Twelve years after turning pro, the American twins continue to thrive on tour. This year they became the winningest doubles pairing in men’s tennis history both in terms of matches won together (topping 600) and in tour titles (64, recently passing Mark Woodforde and Todd Woodbridge’s 61).

On Tuesday they continue their hunt for their third US Open title and ninth major overall. The top seeds will be heavily favored against the Polish pair of Fyrstenberg and Matkowski, with the next highest remaining seeds being No. 5 seeds Lukasz Kubot and Oliver Marach on the opposite side of the draw. 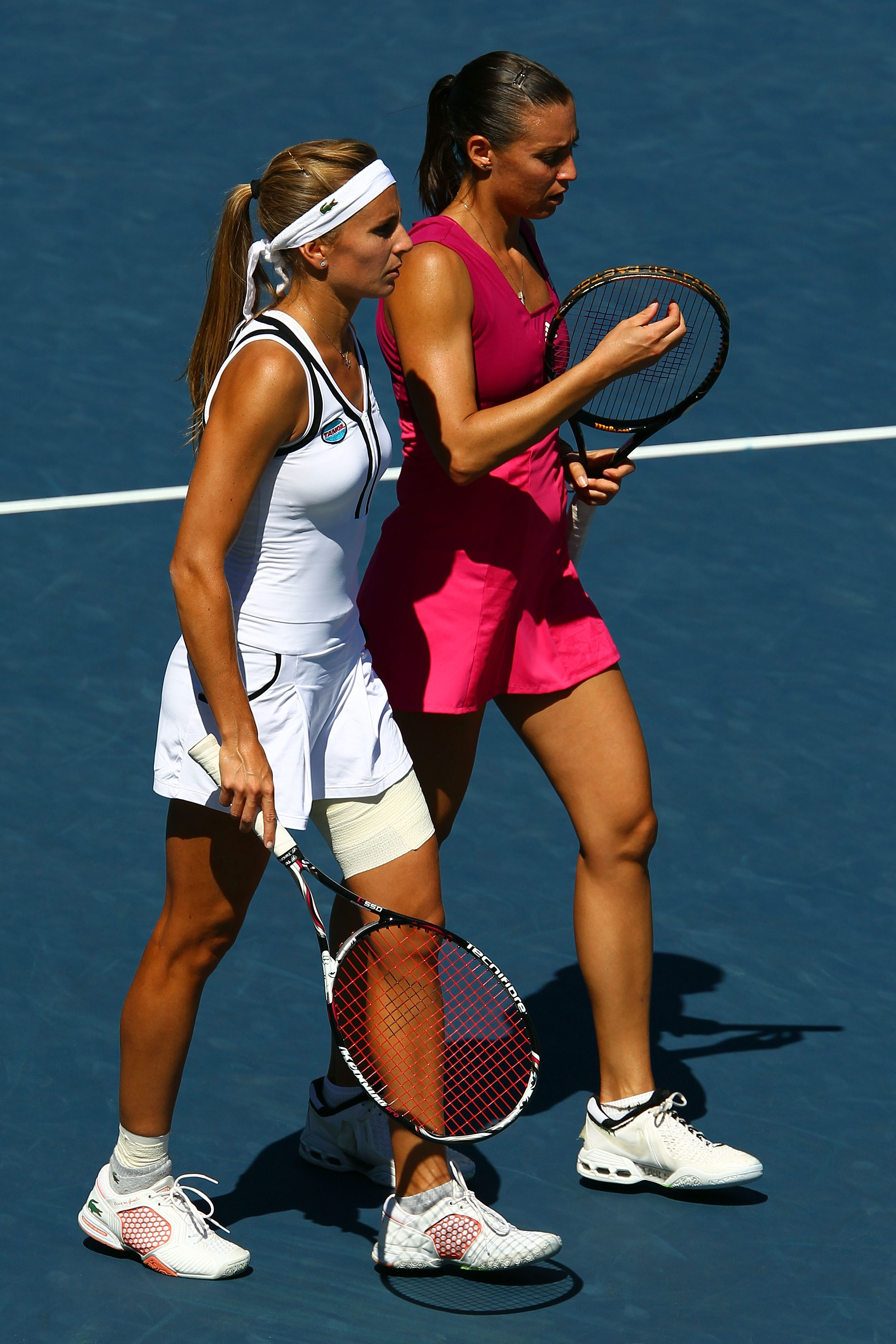 The absence of Williams Sisters from women’s doubles has left the bracket wide open. Case in point, the top seeded team of Dulko and Pennetta have yet to win a major together – neither has won Grand Slam title with any partner, in fact – though their partnership has produced six tour title since last year.

Their hunt for their first continues in the quarters Tuesday, but a significant test awaits them: Together, Vania King and Yaroslava Shvedova have won just two titles this year, but one of them was Wimbledon.