Already faced with the uncertainty of whether or or not Phil Hughes and/or Joba Chamberlain will rejoin the starting rotation, Cashman has unloaded relievers Phil Coke and Brian Bruney.

Coke went to the Tigers in Wedesday's deal that landed Curtis Granderson in the Bronx. Today, Bruney was dealt to D.C. in exchange for Jamie Hoffman, a 25-year-old outfielder who hit .182 in 14 games for Joe Torre's Dodgers in 2009.

Both Coke and Bruney (pictured, right) were fairly significant pieces to the New York bullpen during their run to world title No. 27. Each made an appearance in the World Series against Philadelphia, though both pitched horribly. However, Bruney's regular season ERA was under 4.00 as he made 44 appearances and accumulated 14 holds.

Coke (pictured, left) also held 21 games and struck out 49 batters in 60 innings of work. That's not too shabby for a 27-year-old in his first full season of big league service. The fact that he was a southpaw also added to his value, as the new Yankee Stadium has the same notorious short porch in right field that the old one did. It never hurt to have a lefty coming out of the pen to match up against left-handed power hitters.

But now with their departures, the Yankees are left with nine pitchers on their major league roster. Keep in mind, Ian Kennedy won't be coming up from Scranton as he was shipped to Arizona in the Granderson deal. But you had to know that guy wouldn't be a Yankee for long after his less-than-disappointed reactions to his horrendous outings in 2008. His s-@*-eating grin (pictured, right) wasn't doing him any favors either.

The Yankees have already declined their 2010 option on the inconsistent Sergio Mitre.  Also, Chien-Ming Wang won't be ready for opening day, and the Yankees have made it clear they won't offer their former ace a contract right now.

Mariano Rivera will return as the closer. I won't give his stats, I'll just tell you what you already know—he's the greatest closer in the history of the game.

Phil Hughes may or may not be his setup man, as there is some early talk of bringing him back to the starting rotation. Twice now Hughes has started to show signs of being an ace in the rotation, only to be interrupted.  In 2007, he was eight outs away from a no-hitter in Texas as a rookie, but he pulled his hamstring.

This past season, he was called up from Triple-A to fill a void in the rotation. He went 3-2 in seven starts with 31 strikeouts over 34.2 innings. He was on a two-game winning streak when Chien-Ming Wang returned from the disabled list and bumped Hughes to the 'pen.

The rest is history, as Hughes revealed himself to be a brilliant bridge to Mariano over the remainder of the season. Still, there is early talk of returning him to the starting rotation. The Yankees recently re-signed veteran lefty Andy Pettite, but only three of the five spots in the starting rotation are locked up.

Alfredo Aceves, the 27-year-old righty who had a 3.54 ERA and allowed just over a base runner per inning pitched, is still under contract. His ability to pitch well in multiple roles made him a valuable part of the Yankees bullpen in 2009. He managed to rack up 10 wins while taking just a single loss; he also earned a save in a wild 10-8 July win over Toronto.

This native of Mexico is already drawing comparisons to Ramiro Mendoza; Toronto would be foolish not to inquire about him when the Yankees pursue Roy Halladay. But Aceves' versatility may be something Cashman isn't willing to part with.

The departure of Coke does not leave the bomber bullpen void of lefties, Dámaso Marté is still there. He had a horrid regular season, but was brilliant in the postseason. The lefty threw four scoreless innings in eight playoff appearances, allowing just two hits and walking none. Marté just completed the first of a three-year deal that Cashman signed him to after 2008.

Mark Melancon was scarcely used in 2009, but performed pretty well when he did get the call. In 13 appearances, he had an ERA under 4.00. However, he walked just as many as he struck out (10), and allowed nearly a hit per inning. He is only 24 and may need another full season in Triple-A before he is ready for his first full major league season.

Edwar Ramirez made a big splash in 2008 when he pitched in 55 games in his first full major league season, but he took a giant step backwards in 2009. Ramirez allowed nearly two base runners per inning as his ERA climbed to 5.73. He spent a good portion of the season in the minors and made only 20 appearances for New York. He is already 28 years old, and needs to come into camp ready to prove that he can contribute.

Jonathan Albaladejo is in the same boat as Ramirez. He's 27 and had an ERA well over 5.00 in 2008. Despite the fact that Albaladejo is a righty, right-handed batters hit .353 against him.

Mid-season acquisition Chad Gaudin started six games for the Yankees in 2009, but may find himself in the bullpen in 2010. Cashman sent $100,000 to San Diego in August to acquire the 26-year-old righty, and the move proved to be beneficial.

The Yankees won all six of Gaudin's starts on their way to clinching the best record in baseball. In seven seasons, he has already earned the title of "journeyman," playing for six different teams, including four clubs since opening day 2008. In 2006, he was one of the best relievers in the American League as he held opponents to a .222 average in 55 appearances for Oakland.

Lastly, there is the promising young righty, David Robertson. The former Alabama Crimson Tide hurler put together a terrific 2009 season after a shaky rookie year in 2008.

Robertson ate up more than 43 innings, allowing just 16 earned runs while striking out 63. His 3.30 ERA was third-best on the team behind Rivera and Hughes. Perhaps most impressive was his performance in the playoffs.

The 24-year-old showed great poise in tough situations, allowing no runs in five appearances while picking up two wins in extra inning contests against Minnesota in the ALDS and Los Angeles in the ALCS. His efforts in those games prompted the New York media to dub him "Houdini" as he entered games with runners on base and less than two outs, then escaped unscathed.

He was also effective in Game Five of the World Series against Philadelphia. Starter A.J. Burnett was shelled for six runs over two innings before being pulled. Robertson stopped the bleeding with two scoreless innings and the Yankees nearly came back to clinch the title that night, eventually losing 8-6.

The free agent market for decent relief pitchers is pretty good this winter. Mike Gonzalez topped the list of available relievers as soon as he declined arbitration with Atlanta. The Braves have since signed Billy Wagner, but they also traded Rafael Soriano. Therefore, there is still a strong chance that they will pursue Gonzalez.

The southpaw ate up more than 74 innings this season, striking out 90 while walking just 33 batters. His ERA was a pinpoint 2.42, which is only the fourth-lowest total in his seven-year career. However, his WHIP was 1.20, and he had a bad habit of allowing the first batter on when he entered games in 2009.

He was able to counter that with his ability to strike guys out, but he may have a tougher time getting out of his own jams with American League lineups. But as I mentioned before, he is a lefty, and the Yankees currently have just one of those in the bullpen. As far as free-agent lefty relievers go, he's the best around. 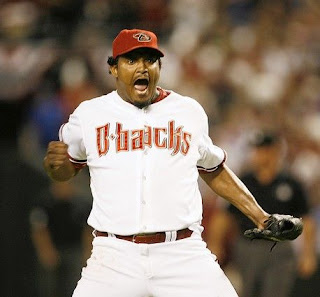 Jose Valverde is the next-best available reliever, but doesn't seem like a fit for the Yankees. Like Gonzalez, he declined arbitration with his 2009 club (Houston) to test the free agent waters. He made $8 million last season, so God knows what kind of money he's after this winter.

Then again, that's closer money. He would not be a closer with the Yankees, and not even Cashman will fork over more than $8 million for a setup man. He would have to accept less money and a new role to be a Yankee. Then again, we've seen others accept that to be part of a winner. Valverde already has a ring though (Arizona, 2003), so I'd expect him to go for the dough.

Next on the list are a pair of righties who came out of Jim Leyland's bullpen in Detroit this year. Fernando Rodney is looking to make big money after converting 37 of 38 save opportunities for the Tigers. He earned $2.7 million in 2009, but his ERA and WHIP were way up (4.40 ERA, 1.47 WHIP). ESPN.com says he may accept a multi-year deal with another team as a setup man.

Brandon Lyon was Rodney's best setup man in 2009. The righty pitched more than 78 innings, allowing just 25 runs with a WHIP of 1.11. After four years up-and-down years with the Diamonbacks, Lyon's move to the AL brought him great success. He may be looking to stay in the junior circuit signed a three-year deal with Houston while I was writing this.

Chan Ho Park is still on the market after a pretty good year in Philadelphia's 'pen. However, he's 36-years-old, and word is that he wants to be a starter again before his career is over. At a price tag of less around $3 million, it might not be a bad gamble for the Yankees to sign a guy who is solid in the pen and a formidable spot starter.

Then again, there is always the "New York factor." Park has been to the Big Apple before, he signed with the Mets in 2007. He started the season in Triple-A before pitching one game as a Met, allowing seven runs in four innings, and was released. The Phillies have made it clear that they want Park back in the same role at a similar price to last season ($2.5 million).

There is a guy out there who has had success in New York, 39-year-old lefty Darren Oliver. The former Met is entering his 16th big league season and may be worth much more than his 2009 salary of around $3.7 million. That's because he's had back-to-back seasons of pitching more than 70 innings while allowing little more than 20 earned runs for the Angels.

He was overworked by the Mets in 2006 (81 innings), but still had a respectable 3.44 ERA and a 4-1 record. He would almost certainly be an improvement over Bruney in the Yankee 'pen.

While it's not quite clear who the Yankees are targeting, one thing is for certain, they've got to land someone. If they don't—and names like Albaladejo, Ramirez, and Melancon are on the opening day roster—then it could be a frustrating season for a bullpen that played a major role in bringing the world title back to the Bronx.