He is not the first human blur to tear through a 40-yard dash. Henry Ruggs III had the jaws dropping and the eyes bulging when he pulled that 4.27 back in February, no doubt, but so have many others before him.

The names of long-forgotten speed demons past are listed off to him, one by one. Dri Archer. Jacoby Ford. J.J. Nelson. Even John Ross III is already rusting into an NFL combine relic.

Ruggs lets each name sink in. Then the sureshot high-first-round receiver out of Alabama assures: His name will not be forgotten.

It's one thing to be armed with speed. It's another to know what the hell to do with it.

"Game speed is definitely different than combine speed," Ruggs says. "And that's one thing I pride myself on: trying to play at my full speed—my top speed—for the entire game."

He explains what that means: He wants the threat of his speed—the threat that he'll kill a defense deep—lurking all game, so he revs as fast as humanly possible every route, every play. That will coax away two, three defensive backs at a time and free up others. So he can warp the contours of the entire defense.

Other players who are this fast simply do not know how to use their speed, how to trust it, Ruggs says. They slow down with every cut, every change of direction. They're afraid if they don't, they won't be able to make their move. They don't know how to harness this superpower.

Then, poof, they're out of the league.

Starting and stopping at 23 mph is not easy. Anyone on his spectrum, Ruggs says, must learn how to "move" their speed.

And the NFL knows he has too. According to B/R draft expert Matt Miller, several teams have him ranked as the top receiver in the draft, even ahead of his all-everything former Alabama teammate, Jerry Jeudy. "You think about all the teams that have been burned by Tyreek Hill. And now there's a version of him without off-field issues. That's a top-10 pick," one director of player personnel says.

That's more along the lines of where Ruggs sees himself. Closer to names like Rice and Moss and TO than Archer, Ford, Nelson and Ross.

There's not a millisecond of hesitation, either. 'Tis the season for hyperbole and hype and dousing your resume with glitter, but you can tell Ruggs means it. Every word coming out of his mouth is sincere.

This is how high he sets the bar. To be something the NFL hasn't seen.

And sport to sport, feat to feat, right down to his motivation, Ruggs explains why he can be different.

The signs were there, as early as eight years old, when Ruggs spent all day doing squats and calf raises and jumping as high as he could. He was strengthening his legs as far back as he can remember.

In track, he was wildly entertaining as the anchor in 4x100-meter relays, leading thrilling comebacks galore. In baseball, if he smacked it anywhere near the wall, it was a guaranteed inside-the-park home run—and he loved bunting, because it was impossible for anyone to retrieve the ball and throw him out at first base. But basketball, that was his first true love. That was the sport that revealed the raw, dangerous explosion within Ruggs.

Reels of his high school dunks at Robert E. Lee High School in Alabama should really come with a disclaimer and must be watched thrice over to be believed.

Henry Ruggs is the ultimate athlete. The NFL prospect was throwing down these dunks in high school 🤯 @brgridiron (via @hudl) https://t.co/GvinaJSTum

His favorite? The 360-degree windmill in practice, of course. That one's difficult for NBA players to pull off in a dunk contest. But the in-game jams—majestic yet disrespectful—are equally must-see. Ruggs gracefully leaps into the air so effortlessly, so weightlessly, before removing your heart from your chest with authority, with wincing ferocity.

It's no wonder he looked up to Russell Westbrook and still does. There's a strong hint of Westbrook in each dunk. They're just rude.

Ruggs served as Lee's jolt of adrenaline, always electrifying the crowd with a dunk, a block, a steal. If he had stuck with basketball as his primary sport, it could've been his future.

He played some football, too, in junior high and as a freshman in high school. But it wasn't his focus, and by sophomore year, he was out. He didn't want anything to do with it. It took his best friend imploring him to return to the sport as a junior, to go all-in on it, for him to get back on the field. And then, hello, there's Ruggs scoring 20 touchdowns on just 82 catches in his junior and senior seasons, being named 247's top-ranked receiver in the 2017 class and detonating games in the SEC.

Football proved to be more geometric. His speed and explosion, blended together at these angles, proved even more dangerous.

And whenever the ball's in his hands, Ruggs is consumed with one singular Russ-like "north-south" mentality, because he believes running sideways will only slow him down. Ruggs cites a play against Ole Miss, a tunnel screen in the red zone, as an example.

He feels a magnetic pull to the end zone and doesn't give a damn that five blue jerseys are there waiting for him. He's going to score. It's a mentality.

That's how Ruggs scored a touchdown on 24 of his 98 receptions at Alabama.

It's a big part of what differentiates him from past track stars in pads.

Everyone knows the drill. As in anything, when you're bowling with Ruggs, there's no lollygagging. No cutting away for snacks or drinks. No regaling the group with that story you've been dying to tell all week. And, no, he does not tolerate more than four bowlers in his lane, because he hates sitting around to wait for his turn.

Every Friday night growing up, he'd bowl with his brothers for three hours straight. In college, he kept on playing and kept on talking trash too. Ruggs loves to remind everyone that they better not give him an opening. One open frame, and I'll come back on you! And he loves pulling a Steph Curry—completely turning around the moment the ball leaves his hand when he knows it'll be a strike, when he knows he spun that ball just right.

The pins crash. He'll tell everyone exactly what happened. And, for good measure, he may even add a diabolical staredown.

Such is the belief bursting through Ruggs' every pore.

Even in a conversation over the phone from Tampa, Florida, even with the COVID-19 pandemic terrifying the world, and cities and states locking down, he can't shake bowling off his mind.

Ruggs says that as soon as he can, he's going to try to hunt down a pro shop for a new ball. If your favorite team drafts him, well, he has a message for you too.

"Let 'em know if they ever want to bowl, to let me know."

Many guys train. Many are athletic. Many have a freakish basketball play locked and loaded in the iPhone to share. But Ruggs knows his belief in himself, in what makes him different, is unique, because it comes from a special place.

The No. 1 reason Ruggs can talk about being the greatest ever is also the reason he feels a dose of PTSD whenever a cold's coming on. Whenever he's sick at all—still—he refuses to tell anybody about it and refuses to just sit in his room.

"I'm never going to lay down and be bed-rest," he says. "I'm going to find a way to get up and get out. … The last time I sat in the room, that's when that happened."

That is the death of his best friend, Rod Scott. The friend who hooked him into the sport to begin with. They were inseparable. Like twins. Ruggs wore No. 2 in basketball, Scott No. 3. Both starred in hoops, but Scott told Ruggs that football was his calling before Ruggs had ever even played it. Soon enough, the best friends were both raking in college offers in two different sports.

The plan was for both to drive north to Birmingham to watch a girls state basketball game. Ruggs knows he would've been the one driving—Rod always let him drive—but he was sick. So he stayed home. So the pain of that day always returns this time of year.

In the rain, Rod's vehicle hydroplaned, rolled over four times, and he was gone.

Initially, Ruggs couldn't handle this tragedy—couldn't escape the reality that things could've been different if he were driving. Now Ruggs never shies away from speaking about this—be it in a heartfelt ESPN special or interviews leading up to the draft—because Rod is the one who gave him the confidence that bursts today.

Way back in high school, he called Ruggs "5-star" long before college football coaches even knew who Ruggs was. And Ruggs can still hear one of his coaches going on and on about how Rod was predicting huge things for him on the football field.

What is making him have that confidence in me? Ruggs thought then.

So Rod is the reason Ruggs held up a "No. 3" after all those touchdowns at 'Bama.

Ruggs has no clue if he'd be here today without that jolt of confidence.

"It's something that stays in the back of my mind forever. It's always going to fuel me to be the best. I'm carrying him with me through everything."

Smallish receivers are not dismissed anymore. They're coveted. The prototype has evolved from 6'4" bully to 5'11" dynamo. Ruggs doesn't shy away from the Hill comparison many make—"that's something I agree with," he says—while adding he loves how Jarvis Landry and DeAndre Hopkins attack the ball. He then lists off the many advantages to being his size.

How he can maneuver through cracks and crevices in a defense that larger receivers wouldn't think of.

How his strength sneaks up on defenders.

"A lot of times when you're smaller," he says, "guys underestimate you. And if it's a bigger guy versus a smaller guy, he's going to come at you with everything he has. … You can make him miss."

So how high will he go?

Ruggs admits he wishes he got the ball more at Alabama and, yet, is also quick to say he never had a problem deferring to Jeudy.

They're tight too. They competed in everything.

For the record, Ruggs claims Jeudy never beat him in a foot race and that Jeudy was always asking him for a head start. (Ruggs never obliged.) It doesn't matter if he's talking about Jeudy or any receiver. Ruggs will take his game over anyone else's because the plan is to be a force the NFL has never seen.

That confidence cannot waver because, here, memories of Rod rush back.

"It's a part of me. It's something I'm going to live with forever," Ruggs says. "If you embrace it and take it head-on, it's something that can definitely fuel you to be better."

"I know the type of things that I can do," he says. "I'll bet on myself against anybody." 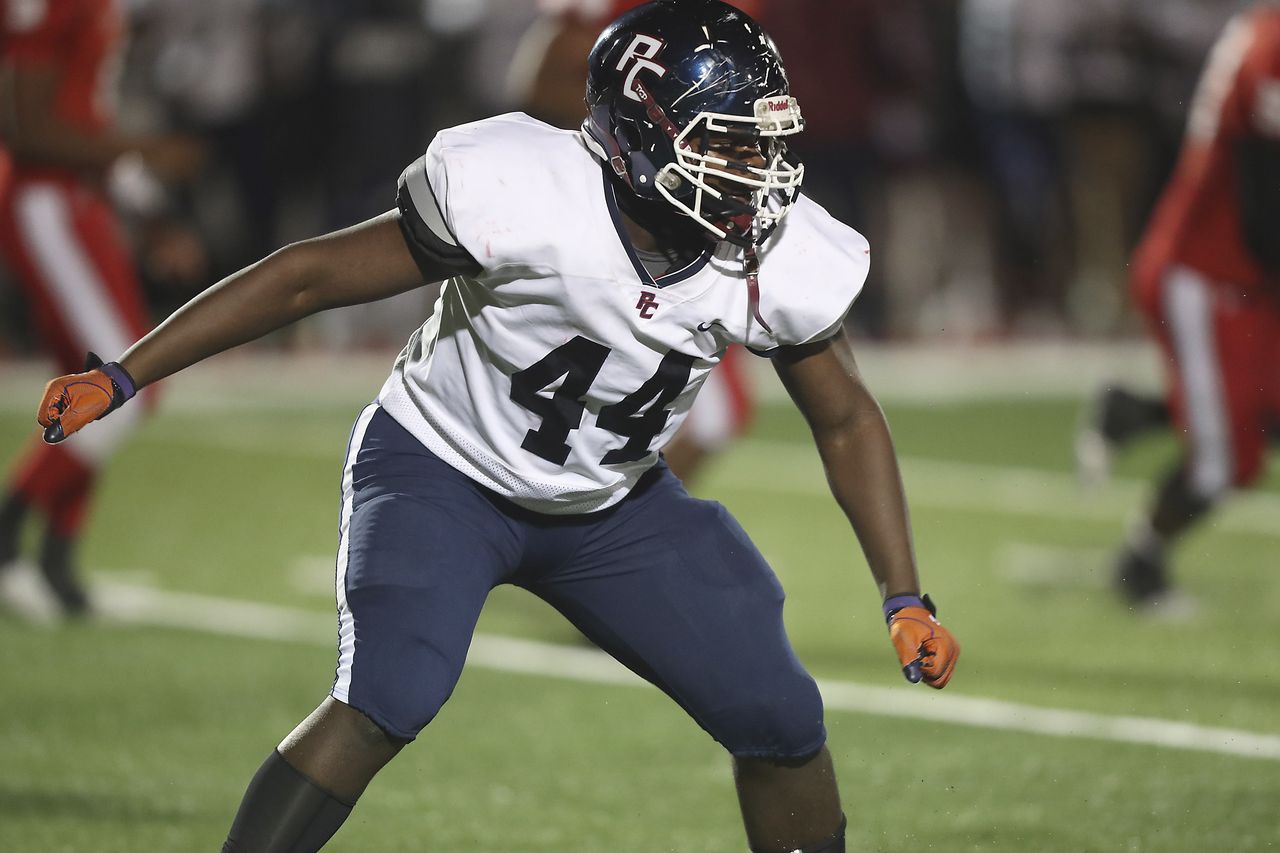