The last stage of the NFL draft process—and one of the most important—is the pro day.

The top prospects get one more chance to impress pro evaluators with the hopes of being invited to an individual workout with the team (and yes, this sounds like a reality dating show). For prospects at Alabama, Ohio State, Missouri and West Virginia, this week was the big one.

Here's the buzz from those workouts.

Defensive tackle Quinnen Williams chose not to work out after posting good marks at the NFL Scouting Combine. As is common for top prospects, he felt his performance in Indianapolis was good enough to stand on.

Running back Josh Jacobs did not work out in Indy due to a groin injury, but he did run the 40-yard dash at his pro day. He turned in a 4.60-second time, which isn't great for a 219-pound running back but also not terrible. Times for his agility drills (three-cone, short shuttle) had not been leaked as of this writing. The poor time isn't expected to hurt Jacobs, given that his game has never been about long speed but a mixture of power, vision and agility.

Offensive linemen Jonah Williams, Ross Pierschbacher and Lester Cotton went through position drills, and one scout in attendance sent a text raving about Williams: "I know some teams think he's a guard, others a tackle, but I think we'd put him at center and he'd be an All-Pro there. Quenton Nelson-type impact, but at center." 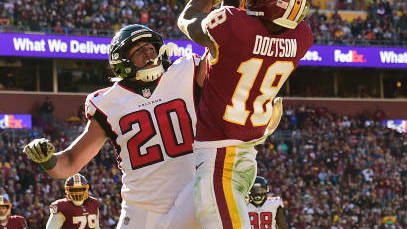 Defensive end Nick Bosa opted to stand on his times from the scouting combine, which is just fine for a projected top-three player. Most notable is that Bosa dined with the San Francisco 49ers, who own the No. 2 overall pick in the draft, the night of the pro day.

Top quarterback prospect Dwayne Haskins did work out, and many in attendance sent feedback that he had an "A+" day throwing the ball and once again performed well in interviews and media sessions. Haskins went to dinner and met with decision-makers from the New York Giants the night before his workout.

With over 100 NFL scouts or coaches in attendance, it was a big moment for Haskins, as he completed 45-of-50 passes in the workout. If the Giants are smart, they're trying to find a way to move up the board to get him as the quarterback of the future in New York.

Drew Lock showed off his arm strength in front of media members and evaluators on Thursday, and by all accounts it went as expected. Lock has the second-strongest arm in the class, behind Buffalo's Tyree Jackson, and that's easy to see in shorts and a T-shirt.

The biggest knock on Lock is his accuracy, and one scout at the workout texted that his ball placement was "off, scattershot" and Lock "didn't look comfortable." That could be due to working out in an indoor facility as opposed to outside, but in the throwing session he wasn't able to impress scouts fully.

Lock was scheduled to meet with the Miami Dolphins and New York Giants around the time of his pro day, but that didn't stop all 32 teams from sending a representative to the Tigers' pro day workout on Thursday.

Perhaps the biggest surprise of the week was the super-positive reports coming out of the West Virginia pro day, where quarterback Will Grier was very impressive according to evaluators who attended.

Grier dominated with middle-of-the-field accuracy, touch and timing. That's his game, and it'll look good when he's not pressured. The question is how he'll handle interior pressure and tighter coverage outside the Big 12. But there is a lot to like about his game, including experience that could put him on the field early in his career.

Grier had dinner with coaches from the Redskins the night before the workout, according to NFL Network's Aditi Kinkhabwala, which is good news for him, as the quarterback-needy Washington front office could go all-in on an accurate middle-of-the-field passer like Grier.

• Penn State quarterback Trace McSorley was asked by NFL teams to work out as a defensive back at the team's pro day and declined, according to an evaluator whose team was among those to put in the request. McSorley is determined to prove he's a quarterback first, but his NFL future likely depends on a position change.

• Will Josh Rosen be traded from the Arizona Cardinals as they prepare to select Kyler Murray first overall? Not so fast, according to one top-level executive for a quarterback-needy team. Per this exec, the fact that Rosen hasn't been traded yet could mean he won't be. "Every team is filling their need at quarterback either  through free agency or the draft," he said. "Who is left to trade a high pick for Rosen?"

It's a good theory, but I still think the Cardinals have time to move Rosen if ownership and the front office get on board with Murray.

• Georgia's Deandre Baker looked like a top-32 pick when the predraft process began, but poor interviews with teams have him falling down the board. After Baker appeared on the Stick to Football podcast with me, one scout wanted to bet that Baker falls out of the first round.

• Another SEC player tumbling down boards is Florida edge-rusher Jachai Polite, who struggled in interviews at the combine. Said one area scout who covers the Southeast: "[Polite] might not even go in the second round. It's bad, man."

Remember this the next time someone tweets about the combine not mattering.

• How good is LSU linebacker Devin White? A general manager told me this week White is "perfect" and "a dream" at linebacker before pointing out his team picks too far down in Round 1 to secure him.

• Get on the Sean Bunting bandwagon while you can. There is serious talk the Central Michigan cornerback could be a top-40 selection after players like Baker and Joejuan Williams have struggled in the last month.

A full three-round mock draft comes out Monday, March 25. Until then, here's an updated top 32 big board to rip apart.

Jay Glazer of The Athletic reported that there were "rumblings" at the start of free agency that Tyreek Hill's name had come up in trade talks. Hill is still with the Chiefs for now, but a pair of investigations into an allegation of child abuse in early March and an alleged battery in mid-March could give momentum to those talks.

The Chiefs took a hard stance against Kareem Hunt when a video surfaced that he had pushed and kicked a woman in a hotel. Due to the video and two other altercations, Hunt was released by the Chiefs at midseason. Like Hill, he was a fan favorite and one of the NFL's best at his position.

Were the Chiefs taking calls? Were they making calls? Or is this just general trade buzz? Only time will tell, as no one in the Chiefs organization is answering questions.

Stanford linebacker Bobby Okereke has become one of the hottest names in the draft with his stock soaring to a mid-Round 2 grade on my board.

Okereke has the athleticism to run from sideline to sideline, and his 4.58-second 40-yard dash at 6'1" and 239 pounds proved what his tape had shown. Okereke fits perfectly with what the NFL wants from off-ball linebackers now that teams are getting faster and more versatile on defense.

As NFL Draft 400 work rolls on, I've taken a closer look at tight ends. One player moving down the board, even if just slightly, is Alabama tight end Irv Smith Jr.

Where will an NFL team use Smith, who has the athletic profile of an H-back? Can he be a fit in a one-tight-end set? Those questions are pushing him from the late first round to the middle of Round 2 on my board.

2. Sleeper of the week

It's linebacker week for us on the NFL Draft 400 team, and one player who immediately stood out as a sleeper and big riser is Hawaii linebacker Jahlani Tavai.

Tavai's tape is a little hard to find and process. He was suspended for the 2019 season opener after being arrested at a Honolulu night club, and then a shoulder injury caused him to miss the last month of the season. So there are questions, but the tape that is available is very impressive. He has the tools to be a potential rookie starter.

We have three new episodes this week. On Monday, Mello and I updated our Round 1 mocks in "Mock Draft Monday." Wednesday's show featured a great interview with Baltimore Ravens safety Tony Jefferson and our updated top 25 big boards.

On Friday, we sat down with Easton Stick from North Dakota State and looked at the worst free-agent contracts ever. Check out the podcast and subscribe if you haven't already. We will also post a ton of behind-the-scenes content on our Instagram page.