Now that former Oklahoma quarterback Kyler Murray has publicly committed to football, he's going to be an even bigger piece of the NFL draft picture. There is no clear-cut No. 1 quarterback in this draft class, and despite his size (listed at 5'10"), Murray is likely to remain in the conversation up to the opening night of the draft.

In other words, no one is going to forget that Murray is a potential first-round pick anytime soon.

There are some other prospects, however, who aren't dominating the spotlight. This doesn't mean they won't be impactful players or even franchise building blocks. This just means that because of position, program or profile, they have flown under the radar to this point. You'll find a few such prospects below, preceded by an updated first-round mock. 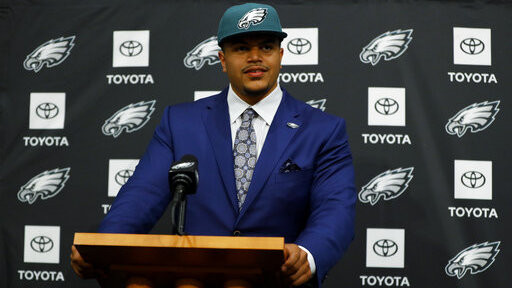 Former West Virginia quarterback Will Grier has fallen out of the spotlight a bit since the end of the 2018 season. The buzz surrounding Murray is partially responsible. So is the strong week that Drew Lock had and disappointing week Daniel Jones had at the Senior Bowl.

Ohio State's Dwayne Haskins has remained in the conversation to be the first quarterback off the board, and there seems to be a debate on whether Murray, Jones or Lock should go second. Somewhere along the line, Grier disappeared from that conversation.

However, Grier absolutely must remain in first-round consideration. Even if he isn't one of the first four quarterbacks off the board—as is the case in this mock—a team like the Los Angeles Chargers or New England Patriots could snag him at the bottom of Round 1 as its quarterback of the future.

Grier passed for 3,864 yards with 37 touchdowns and eight interceptions last season—and he has no doubt that his skills will translate to the NFL.

"I'm the best quarterback in this draft," Grier said during Senior Bowl Week, per Terez Paylor of Yahoo Sports.

Strong performances at the scouting combine and at West Virginia's pro day could thrust Grier back into the spotlight.

Even though the offensive line is vital to the success of an NFL offense, linemen don't tend to generate much draft excitement. This is part of the reason why Florida's Jawaan Taylor has been flying under the radar.

It is also potentially because Taylor projects as a right tackle in the NFL. The notion that left tackles are more valuable because they protect the blind side still lingers. The reality, though, is that the league's top pass-rushers move around the formation and often line up against the right tackle.

Therefore, Taylor should really be viewed as a tackle, period. Teams are taking notice and could end up making Taylor a more-coveted player than he appears to be.

This year's draft is widely viewed as a defense-oriented one. Players like Nick Bosa, Quinnen Williams and Josh Allen are all likely to go within the first few picks of Round 1. Former Ohio State defensive tackle Dre'Mont Jones, however, hasn't garnered as much attention as the aforementioned defenders—and that needs to change.

Jones has the tools to be an immediate starter in the NFL. He racked up 13 tackles for a loss and 8.5 sacks just last season, and he was the top interior defender in the Big 10 in 2018, according to Pro Football Focus:

Dre'Mont Jones was an elite interior defender for Ohio State this season and was the highest-graded in the B1G. https://t.co/k2Ic9j2nf8

Jones may not actually stay out of the spotlight for long. He's largely been overshadowed by former Mississippi State defensive tackle Jeffery Simmons. However, Simmons recently suffered a torn ACL, which will undoubtedly knock him down draft boards.

Miss. St standout DT Jeffery Simmons does, in fact, have a torn ACL from doing a routine drill during a workout, source said. Statement is coming, but so is surgery. Simmons can’t attend the Combine for an off-field incident, per NFL rules, but the injury brings more questions.

Someone will still scoop up Simmons, but probably not in the first round. That opens up a defensive tackle spot that Jones should occupy.