—Tall (6'5") and physical with excellent athleticism for the position.

—Developed route tree that allows him to fit into any scheme.

—All-around athlete who was a top-tier high school basketball player.

—Makes catching look easy with a big radius and the hand strength to make circus grabs.

—Fast and strong enough to line up flexed in the slot, as an H-back or even as an in-line tight end.

—Has the mentality to go bang with linebackers and safeties in the middle of the field; isn't intimidated off of a route.

—Three-down tight end who has experience opening lanes in the run game.

—Former walk-on has built himself into a complete tight end.

—Dominated FCS level; injured for Senior Bowl, so questions about level of competition are there.

—Can run tall through his routes.

—Doesn't have great twitch and burst at his route stem.

—Will have to better use his body to shield NFL safeties. 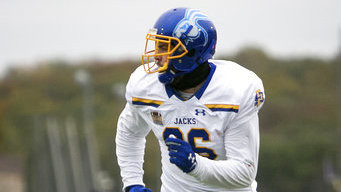 Goedert lit up the FCS level and hits every box for athleticism, character and football IQ that NFL teams look for in tight ends. His biggest question mark is the level of competition he faced. He might start a bit slower than his tight end peers in this class, but no one has more potential.