The Jay Cutler era is over in the Windy City. The Chicago Bears will release the 33-year-old quarterback, the team announced Thursday:

This comes after the Bears failed to find a trading partner for Cutler. They are moving in a different direction at the position, as NFL Network's Ian Rapoport reported the team will sign Mike Glennon to a three-year deal.

ESPN's Jeff Darlington reported Feb. 21 Chicago made Cutler available to the highest bidder. Pro Football Talk's Mike Florio wrote, however, that the situation wasn't as straightforward as a normal trade might be:

Yes, if he wants to earn a $12.5 million salary and up to $2.5 million in per-game roster bonuses, he will. But if he chooses not to show up at his next destination, Cutler won't have to return a penny of the $54 million he received over the last three years. With no signing bonus on the deal he signed three years ago, there's no obligation to return any of the compensation paid to Cutler under the terms of the contract.

It gives Cutler plenty of leverage, preventing the Bears from simply dumping him onto any team that will take him, regardless of whether Cutler has any desire to play there.

Regardless, the Bears weren't negotiating from a position of strength, as most expected Chicago to jettison Cutler one way or another. 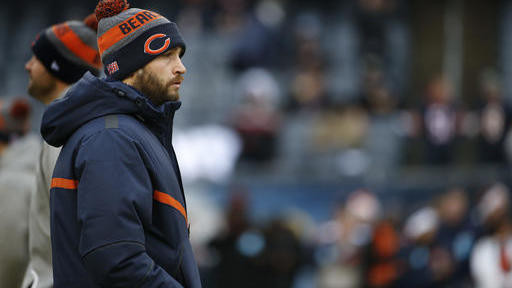 The franchise is rebuilding, so it had little reason to continue starting an inconsistent quarterback who turns 34 in April.

Finances also gave the Bears a strong incentive to go in a different direction in 2017. According to Over the Cap, Chicago saves roughly $12.3 million in salary-cap space against $2 million in dead money.

For teams looking to acquire Cutler, there was little reason to discuss a trade with the Bears since they were bound to release him outright sooner or later.

Cutler isn't solely to blame for the Bears' single playoff appearance in his eight seasons under center, but he did himself few favors. Since 2009, he has thrown the sixth-most interceptions (109) in the NFL, per Pro-Football-Reference.com. During the same span, he's 13th in passing yards (23,443) and touchdowns (154).

In addition to his underwhelming stats, Cutler is recovering from shoulder surgery that ended his 2016 season in December. Rapoport reported Feb. 22 that Cutler expects he'll be healthy enough to pass a physical in March.

Still, the shoulder injury adds another element of risk to signing Cutler.

There's little to indicate Cutler will be drastically better in 2017. Even at his peak, he remained frustratingly erratic. Should his shoulder surgery result in diminished throwing power, he won't be able to make the same kind of passes he did when he was younger—a concerning fact given his gunslinger mentality.

Cutler was the most proven free agent available, but that's not saying a whole lot when Mike Glennon, Brian Hoyer, Geno Smith and Matt Barkley were among the next-best options.

The Bears, meanwhile, can fully begin the search for their quarterback of the future. With the No. 3 pick in the 2017 draft, they'll have options.

Chicago could target DeShoneKizer, Deshaun Watson or Mitch Trubisky in the first round. If the front office isn't sold on one of the top names, it could wait until the second round and take Brad Kaaya or Patrick Mahomes.

For Bears fans, more years of mediocrity isn't an enticing prospect considering the team hasn't finished with a winning record since 2012. Fully committing to a young passer, though, is a preferable route to relying on an aging Cutler in hopes he could spark a turnaround.